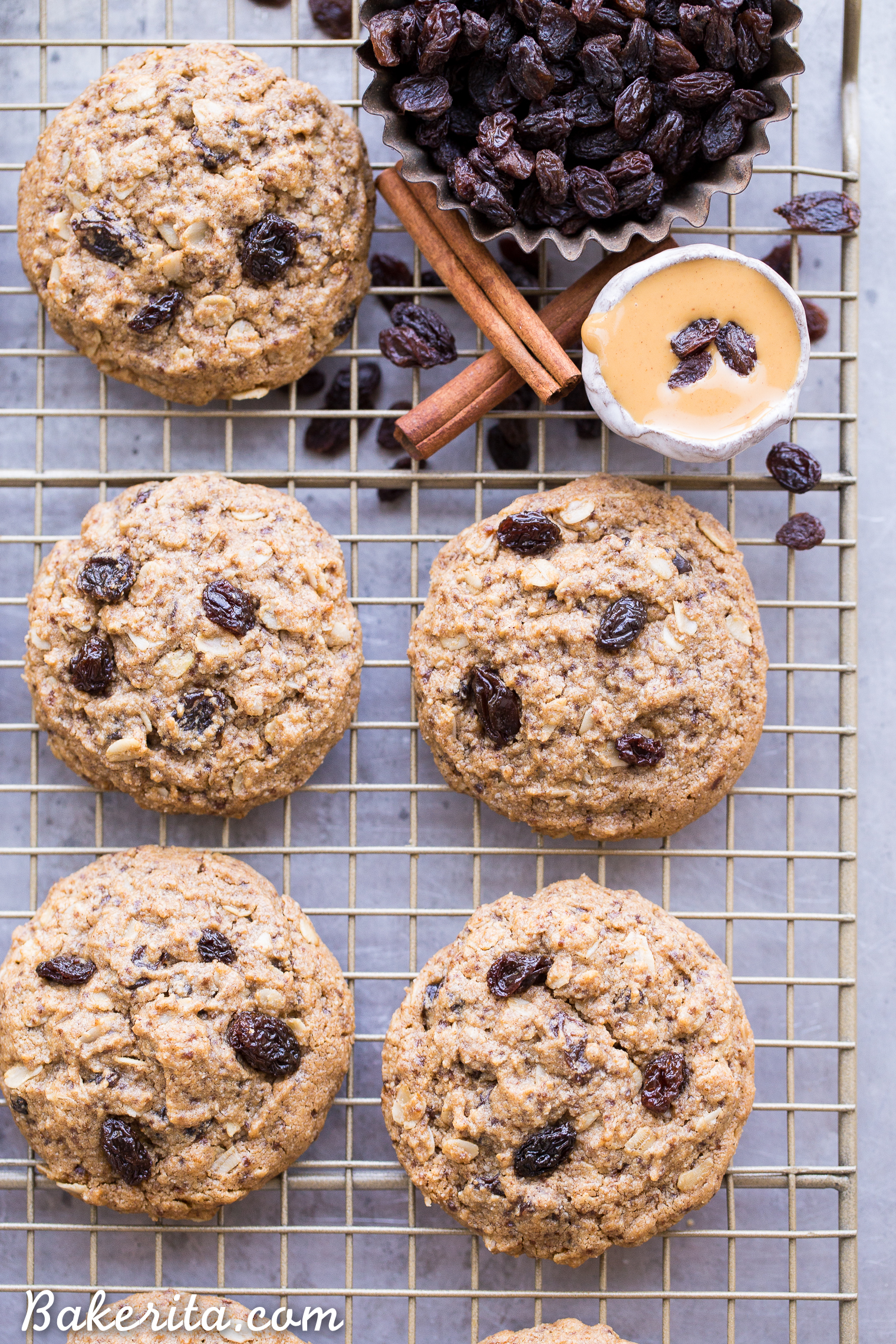 Normally, I’m right there with the author of that saying. Gimme all the chocolate! But, I’ve got a recipe here that might change your mind and have you diving right into these, raisins and all. 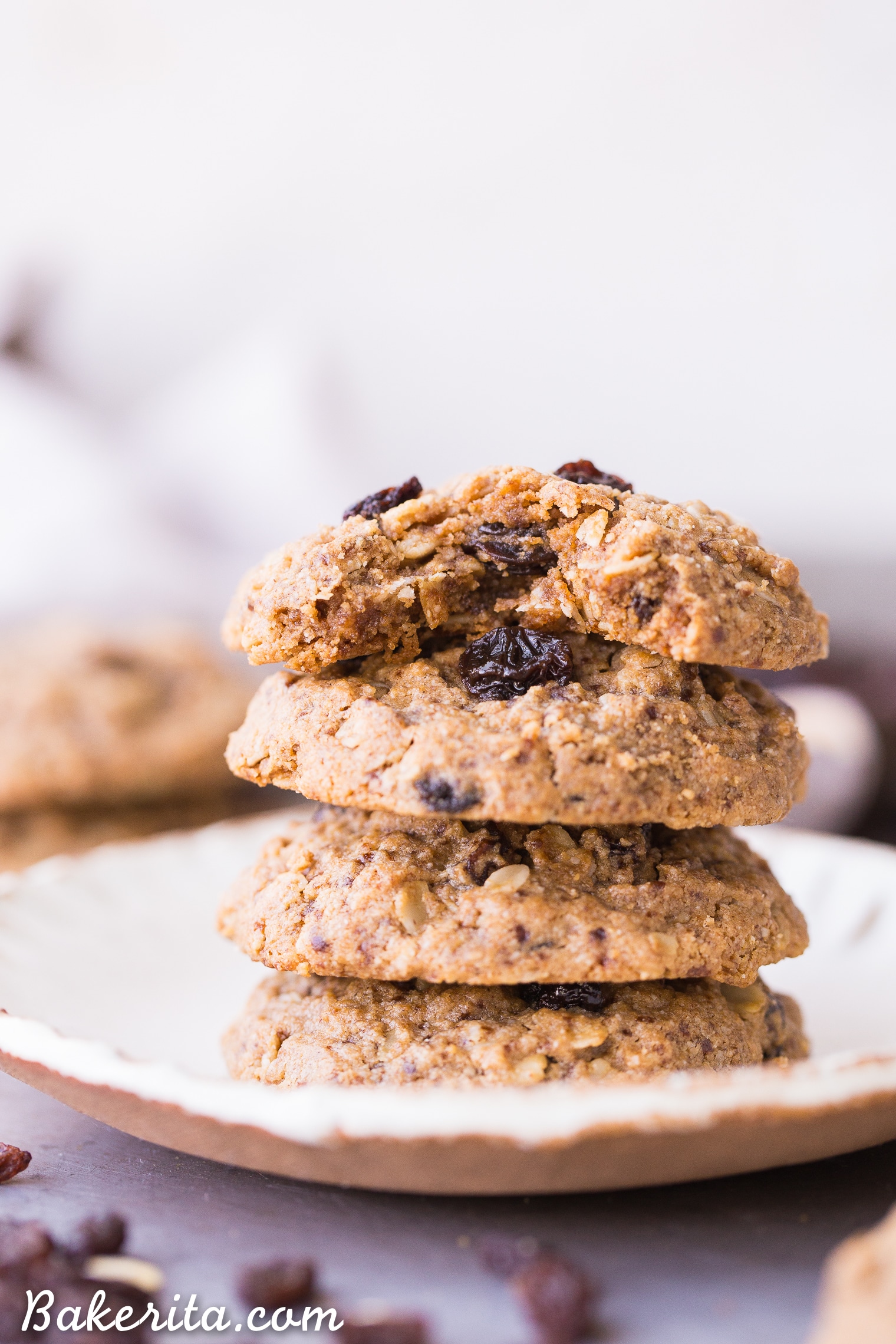 A few months back, I made a homemade Cinnamon Raisin Almond Butter. Good Lord, that stuff was addictive. Ever since, I’ve been a bigger fan of raisins, and the sweet burst of chewiness they bring to the recipes they’re in.

I was recently having a hankering for a super peanut buttery cookie that was full of texture, and these Cinnamon Raisin Peanut Butter Oatmeal Cookies came to mind. Of course, those are an old recipe that’s full of sugar, butter, and a bunch of non-vegan and non-gluten free ingredients. 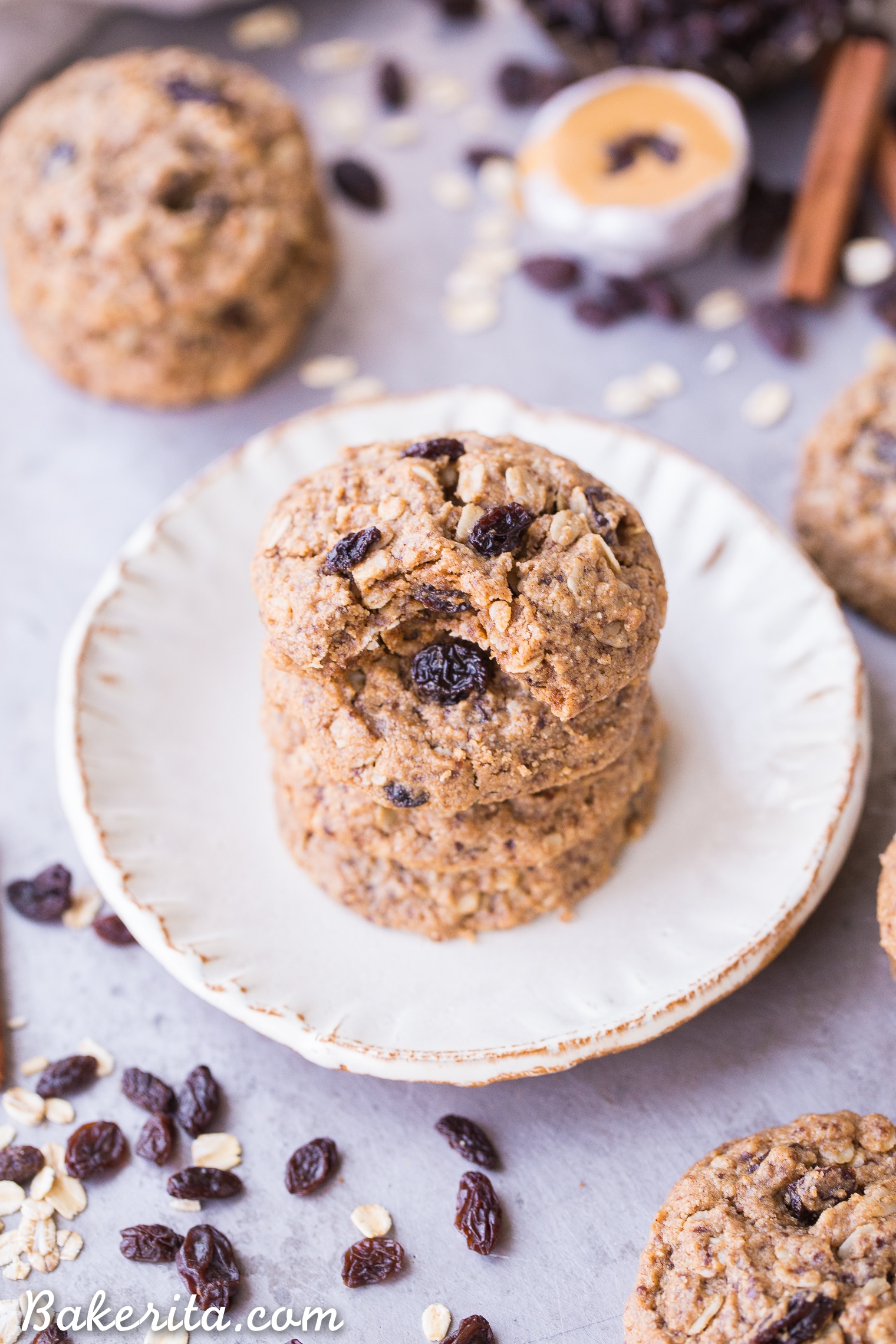 But since they were SO good the first time around, I figured it was worth a shot at converting them into a gluten-free, refined sugar-free, vegan masterpiece. Challenge was a SUCCESS! Dang, you guys, these cookies are irresistible. I wish I could hand each of you one of them so you could see for yourself.

I’m normally not the biggest peanut butter cookie lover ever (I’d rather just eat it with a spoon) and my boyfriend Jesse claims he normally doesn’t like raisin cookies…yet each of us totally demolished a few of these. They’re SUPER peanut buttery, with a little bit of texture and chew from the oats, and a burst of sweetness from the raisins. 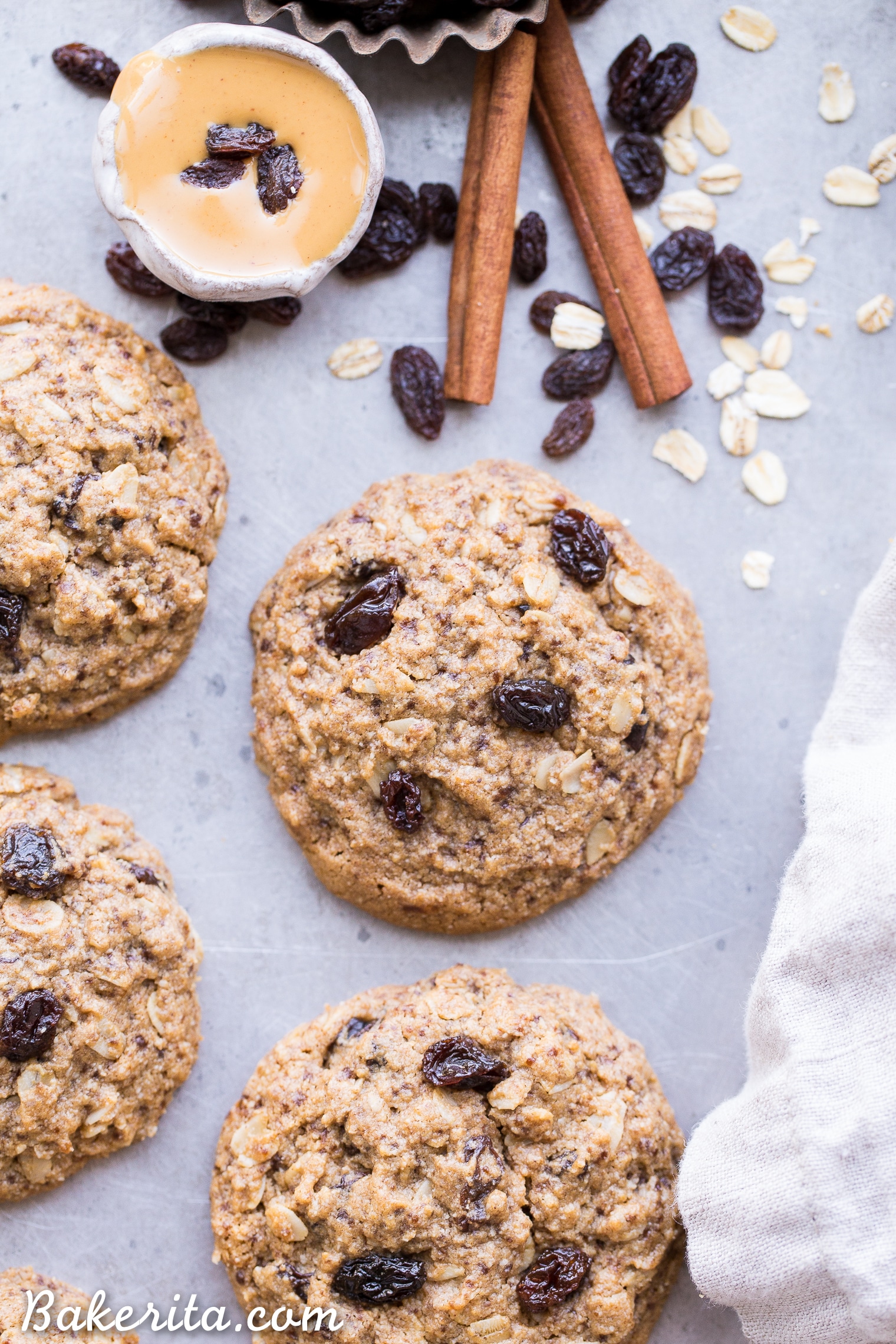 These Peanut Butter Oatmeal Raisin Cookies also have some cinnamon added for some additional warmth, which always plays so well with the oatmeal raisin flavor combination. The texture of these cookies is soft and chewy – don’t expect crunchy cookies with this one!

I tested the recipe with a real egg and a flax egg, and both were fabulous, but with the flax egg, they were a little crumblier when warm. Make sure they’re cooled completely on the baking sheet before trying to remove them so you don’t end up with cookie crumbles! 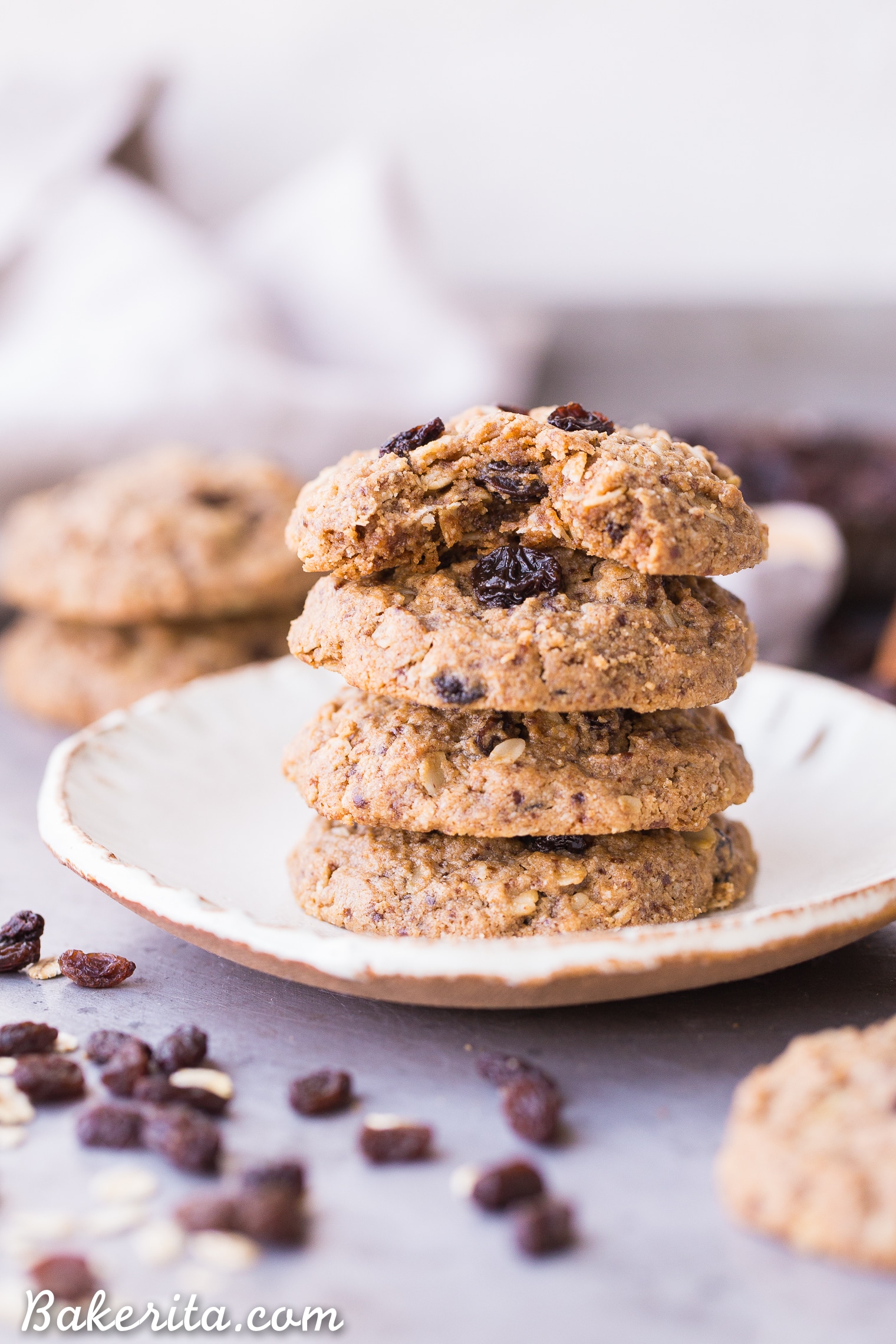 If you’re a peanut butter nut like me, and can’t get enough of oatmeal cookies, these are for YOU. And of course, if you absolutely can’t give up chocolate, sub in some chocolate chips for the raisins 😉 I hope you’ll give these a go, and enjoy! 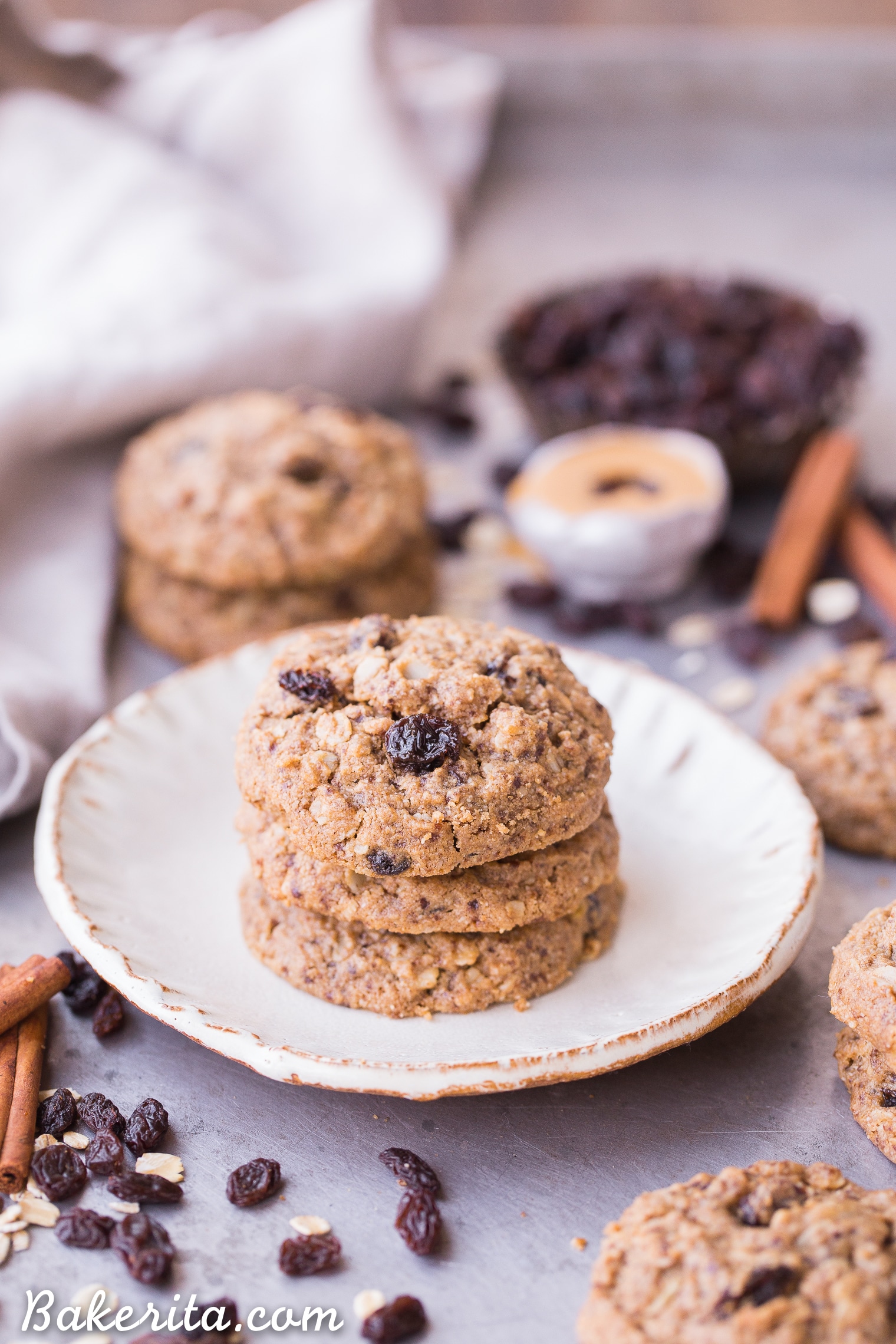 Don’t put the oats away yet! Try these oat-filled goodies…

These Peanut Butter Oatmeal Raisin Cookies are the best oatmeal raisin cookies I've ever had! They're incredibly soft and chewy, with crispy edges and MAJOR peanut butter flavor. You won't believe they're gluten-free, refined sugar-free and vegan.

Thank you to the women who nominated me to do this

want to have the best cheesecake of your life, no