Even your most intense chocolate craving doesn’t stand a chance against these Paleo Double Chocolate Cookies! These super chocolatey cookies are gluten free and refined sugar free. 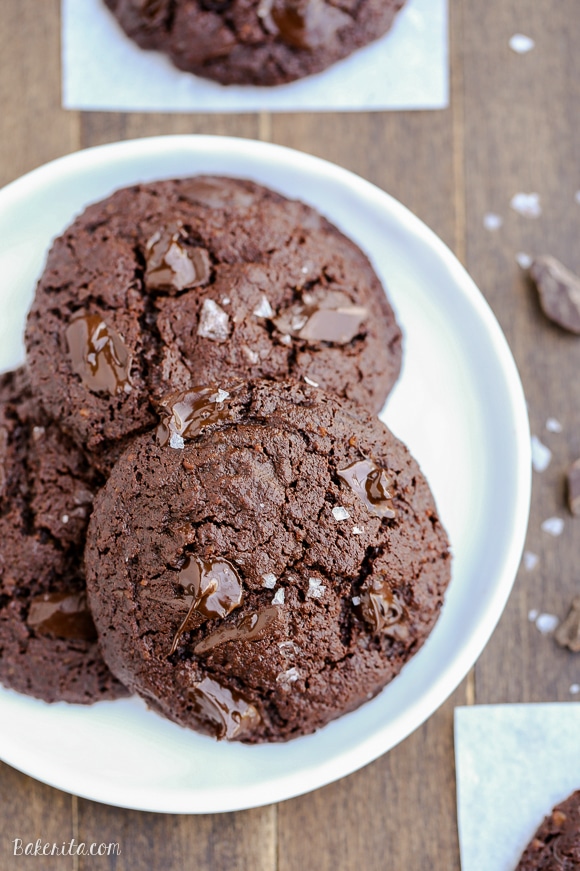 this recipe
I’m officially a San Diego resident again! Sorry for my lack of posts last week, but my plan to write posts at the end of long driving days seemed way less fun after eating big meals and many houuuurs of driving each day. But now we’re back to our regularly scheduled programming!

Before we talk about these glorious paleo double chocolate cookies you’re looking at though, can I finish telling you about my road trip?! If you want to read the first part, you can read it here. If you don’t care, skip ahead to the recipe – I promise I won’t be offended :) 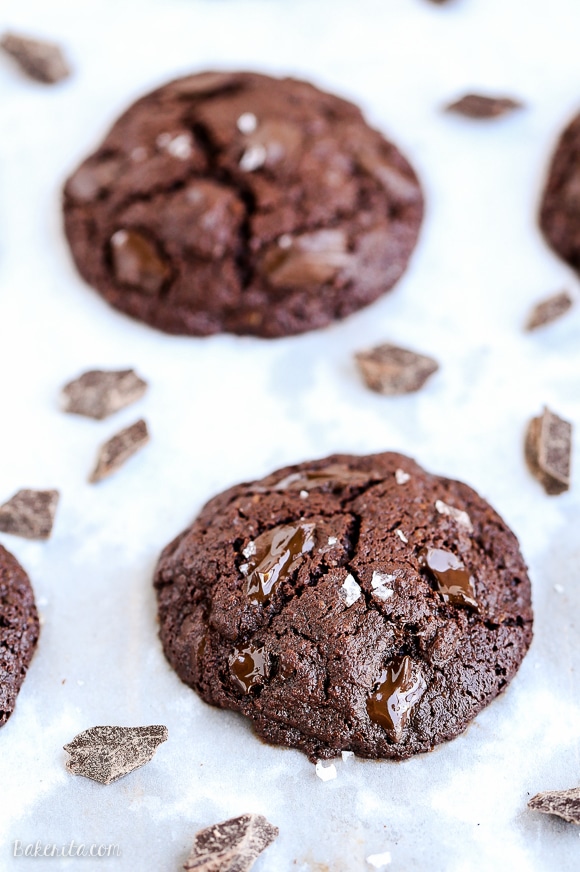 On our way out of Gold Beach, Oregon, we pulled over on the 101 to hike down a little unmarked path down to a secret beach our kayak guides had pointed out to us the day before. Once we trekked down the path, eating salmonberries off the sides of the trail along the way, until we stumbled upon the most beautiful, magical place: there was a stunning beach on one side and a rushing waterfall on the other, all nestled in the trees. I would’ve stayed there for hours if we didn’t have 300 more miles to drive that day.

Luckily, the drive down the coast to Mendocino, CA was anything but a chore. We wound down the remaining Oregon coastline into California, stopping what felt like every 15 minutes to take pictures because with the way the water was sparkling in the 75 degree heat, it felt impossible not to. We made a quick pitstop in the tiny town of Trinidad, CA to wind down the “scenic alternative” route, which ran right along the coast. 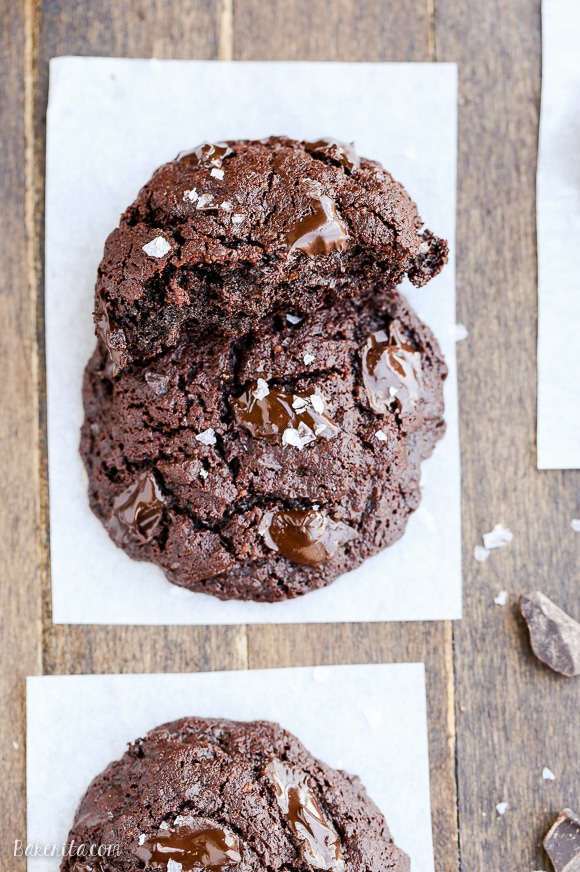 We started getting hungry as we were cruising through Humboldt County and veered off the 101 into Eureka, where we ended up at Taste for lunch, Eureka’s tourism shop that also happened to serve super fresh oysters and the best pizza ever. From there, we headed further down South and started passing through the Redwoods.

If you’ve never been to the Redwoods…words can’t describe it. The trees seemed to go up forever, and standing amongst the trees in the Avenue of the Giants made me feel TINY and so young compared to their thousands of years. It felt like a space full of wisdom, and I took a felt inspired to take a little time to do some yoga and stretching among the giants – my dad snapped this picture, and I couldn’t get over the perfection of the light.

Being here made me feel extra small 🌲

After leaving the Redwoods, we raced the sun to get to Wild Fish in Mendocino for dinner by our 7:30 reservation time. We found Wild Fish totally accidentally another time doing this road trip in the opposite direction and my dad discovered the BEST gluten-free bread he’d ever had, courtesy of their Celiac pastry chef.

We both insisted we go there again, and oh my…it was so worth it. It was definitely one of the best meals of the trip – finished with a ridiculously delicious chocolate mole pot de creme that has made it on to the MUST BE REPLICATED list. 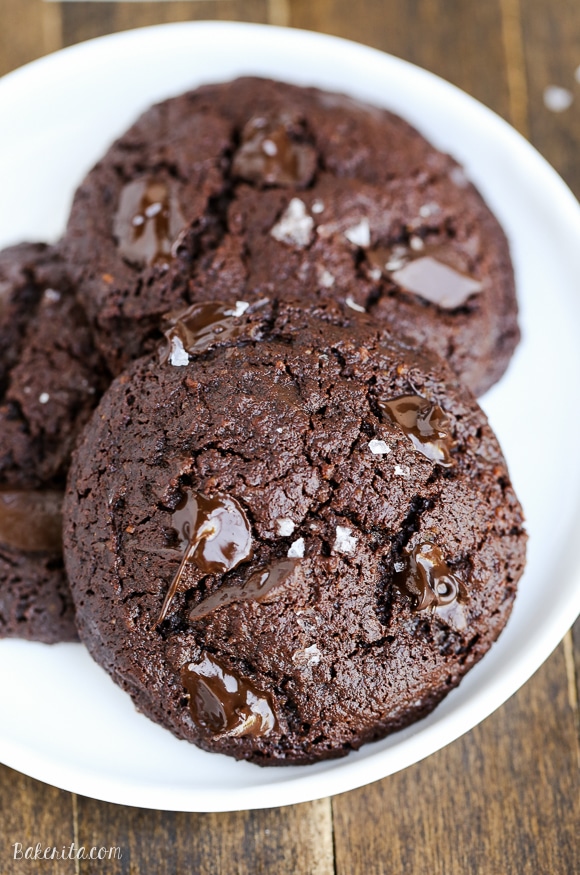 The following morning, we were up and at ’em rather early, on the way down to Carmel. It was a stunningly beautiful drive going through Sonoma county, but that day the windy roads finally did me in and I spent a good two hours wishing for the car to just stop moving while I found car sickness. Thankfully, we made a stop in San Francisco to see my sister and her boyfriend for a late lunch where I was able to stuff my face full of bread and let my stomach regain it’s composure.

We fought through San Fransisco traffic and finally made it to Carmel shortly after the sun had set, where we wandered through the streets for something to eat. We ended up going into the most fun Greek restaurant where halfway through our delicious meal, they came out with a guitar and the whole place started singing and dancing.

The next morning, which was supposed to be our last day, we had breakfast at the hotel and then I insisted that we go explore the little, beautiful town of Carmel, delaying our start to the delay rather significantly. It was totally worth it though – I found a new obsession in the store Kurtz Culinary Creations and the quaint adorableness of the whole town.

When we left, navigation was trying to pull us out to the 5 to get us home quickly, but we decided to opt for the Highway 1: more winding along the coast, but so worth it for the spectacular views. We passed by Hearst Castle and stopped for lunch in Cambria, another teensy coastal town with all the charm in the world. Cambria is on the brink of Southern California’s wine country, and as we continued south and started to hit traffic, we reconsidered making the drive all the way home that night – especially as the time of arrival got later and later, and traffic got worse and worse.

I hopped on to the app Hotel Tonight to find something near us and found a great deal for a sweet looking inn close to where we were in Santa Ynez. We had no idea what to expect driving into this town, and it felt like hopping back in time when we did. It looked like a little Western town from the movies, except all the store fronts were winery tasting rooms and cute restaurants.

When we got to the inn and checked in, we were informed that something was wrong with our room and the only room left to give us was the junior suite…I think I skipped there and did a happy dance as soon as we stepped in. It was ridiculously beautiful, with a chandelier on the ceiling, private patio, and a marble-and-gold bathroom, complete with steam shower and Jacuzzi tub. I thought I was a princess for a little while. 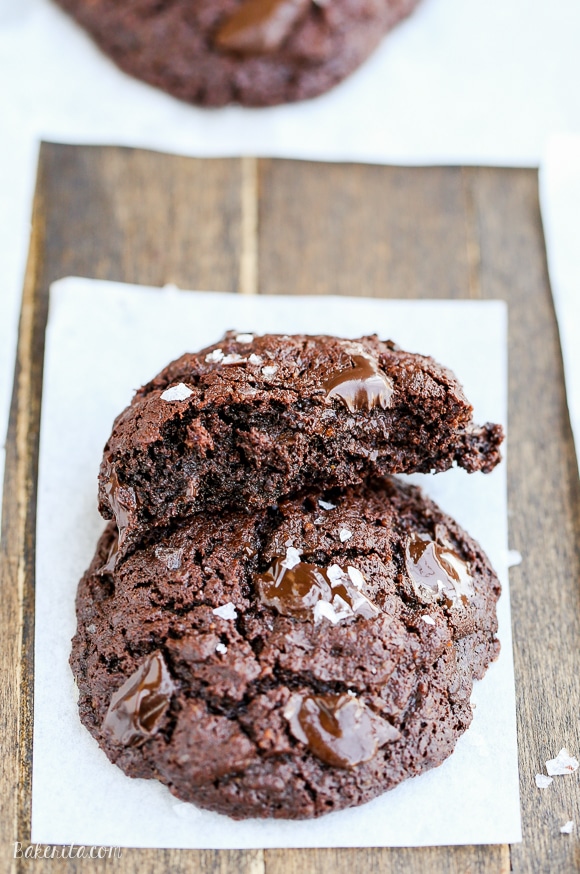 We had a delicious dinner in the warm summer heat at a restaurant a few blocks from the hotel and took off for home the following morning, powering through without stopping until we finally reached home, sweet home. I’ve been in road trip recovery mode in the day since we got back, and trying to catch up on all the things I accidentally abandoned (I guess I had forgotten the lack of service on the coast).

And now, the apartment hunt begins! But first – cookies. Because that’s what you’re here for, right? And rightly so – these paleo double chocolate cookies are the bomb. They’re naturally flourless and refined sugar free, because they’re sweetened with coconut sugar. 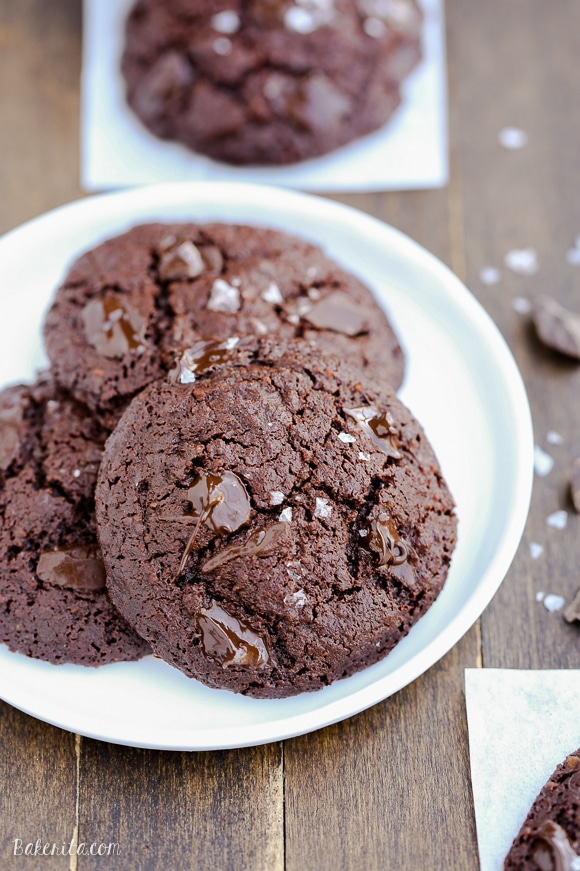 They’re ULTRA chocolatey and fudgy, the way a double chocolate cookie should be. The big chocolate chunks definitely help out in that department, and a sprinkle of flaky sea salt adds that salty/sweet combo that I love. But that’s personal preference so if salty sweet isn’t your jam, skip it. Take 10 minutes today to give your chocolate sweet tooth the best treat it’s had all week – you deserve it! Enjoy :)