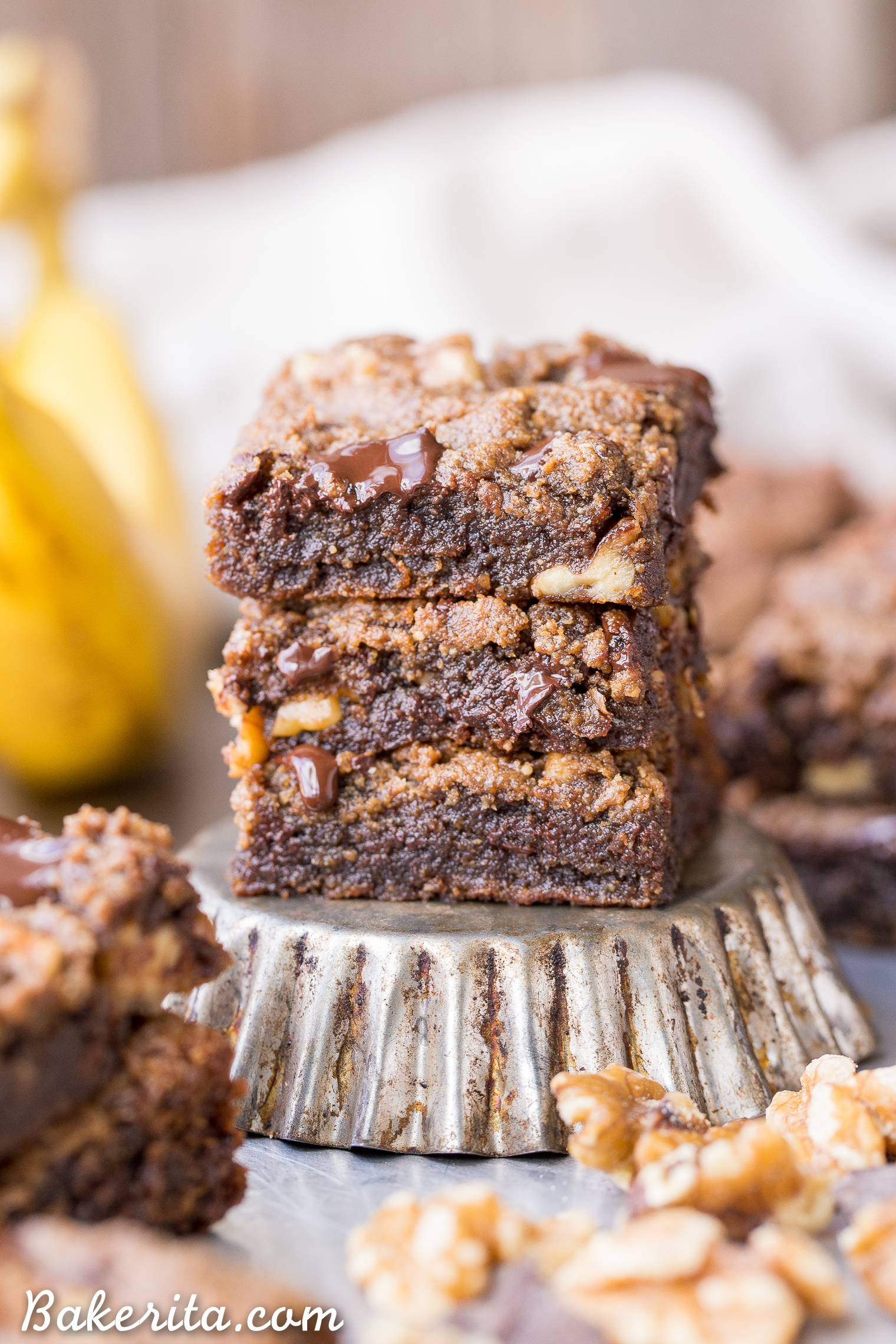 I think I’m a blondie-a-holic. Each time one of my blondie recipes disappears from the fridge, I start brainstorming a new blondie recipe that I can start testing to replenish the stash 😏

So after the last of my recent paleo + vegan Chocolate Chip Pumpkin Blondies got eaten, I started dreaming up a something new to replace them in the fridge. One of my more popular recipes is these Paleo Banana Nut Muffins, and I started thinking that banana nut blondies would be even better. 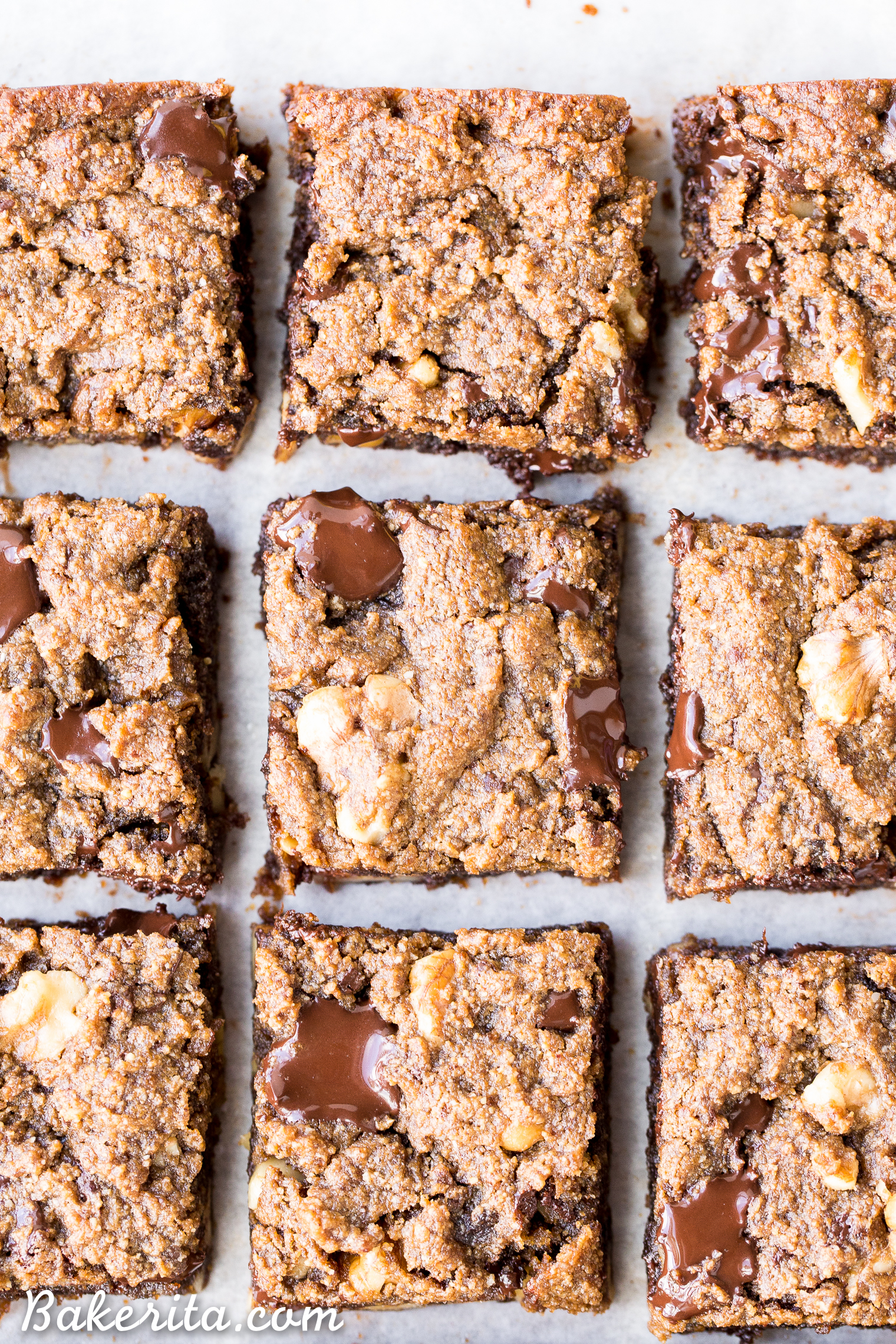 Oh man, I was definitely right. The banana helps these blondies get extra chewy, which contrasts deliciously with the crunchy toasted walnuts, and the melted dark chocolate chunks add a deliciously gooey element. Swoooon.

These are one of those treats I know no one would suspect of being gluten-free, paleo, and vegan – they’re just too rich, decadent, and flavorful. The mashed ripe banana takes the place of the egg in this recipe, helping to make them vegan, and it adds a fruity flavor and some moist chewiness. 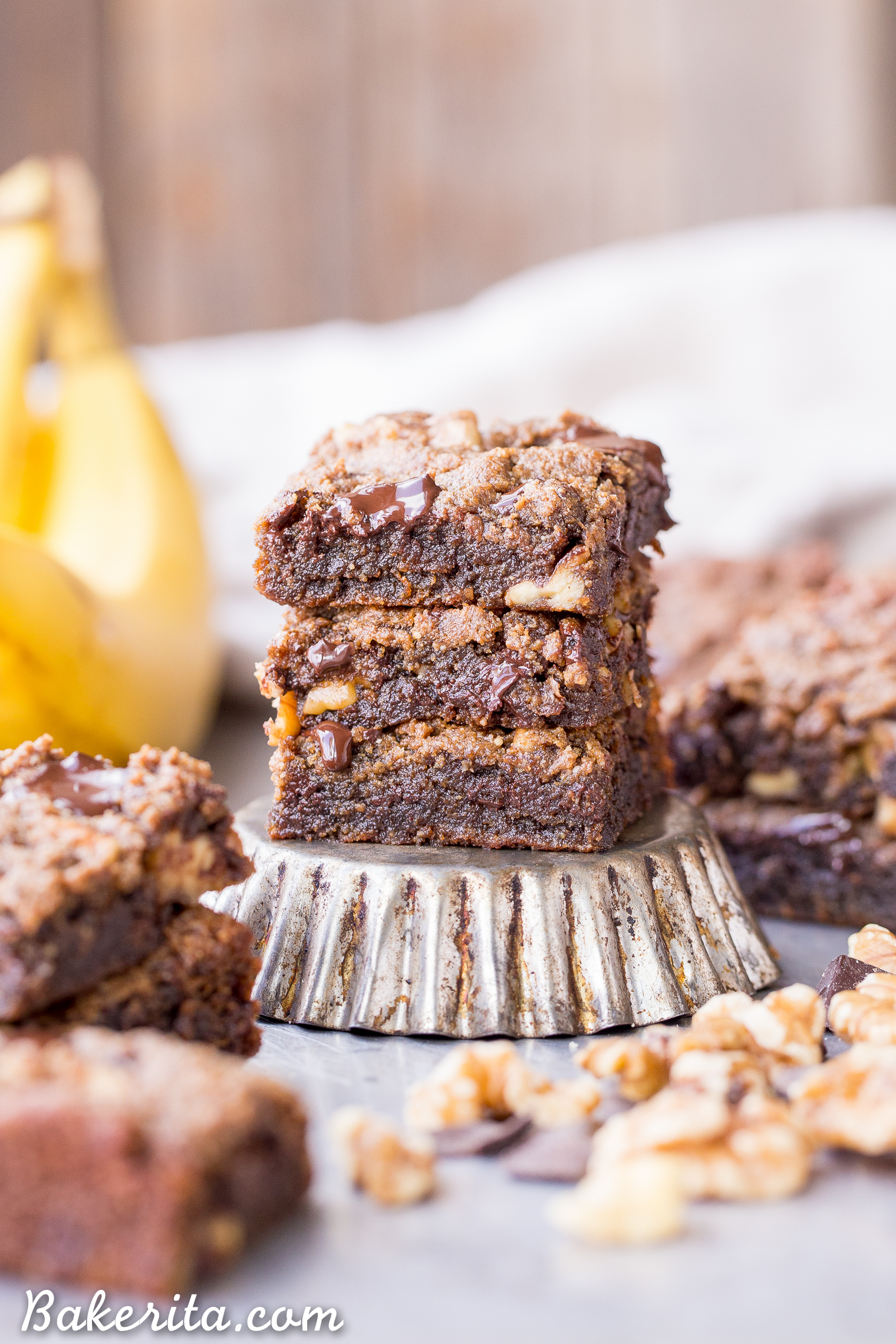 Nut butter helps provide richness, structure, and flavor in this recipe. I opted for almond butter, because it’s pretty neutral with the almond flour, but you could use peanut butter for a delicious twist, or cashew butter to make it ultra-rich and add a little extra creamy sweetness.

It’s sweetened with coconut sugar – I found 1/2 cup to be just sweet enough, but if you have a big sweet tooth, you could go to 2/3, or if you don’t have much of a sweet tooth or if you banana is super ripe, you can reduce it down to 1/3. For the flour, I used almond and coconut. There’s only a few tablespoons of coconut flour, but they help absorb some extra moisture and make these banana nut blondies extra chewy. 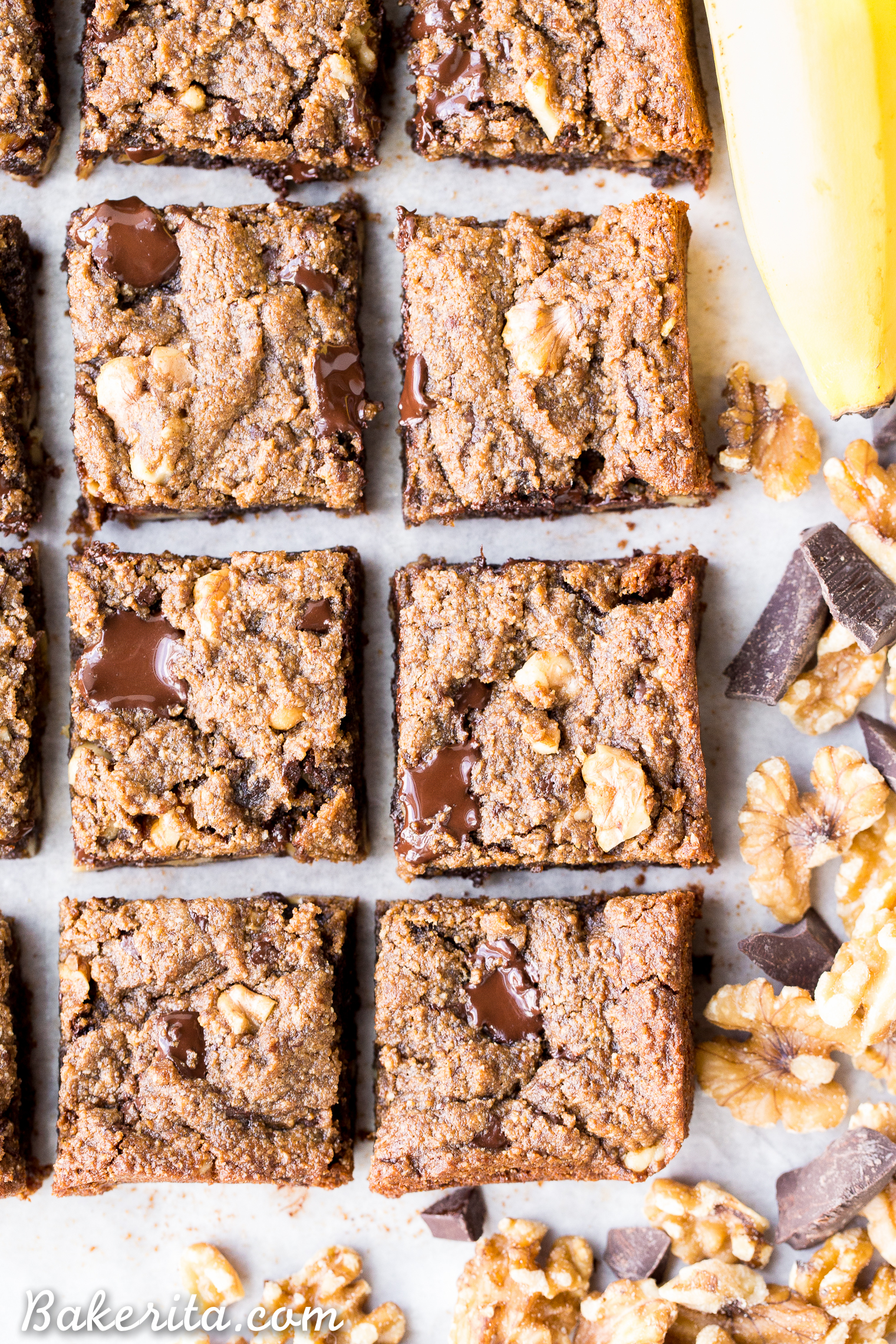 I added a touch of cinnamon for warmth, because I love the way it pairs with the banana nut flavor combination, along with some vanilla. For the mix-ins, I was originally planned on sticking with just toasted walnuts…but I couldn’t resist tossing in some dark chocolate chunks as well.

And chocolate chunks are always a good idea, so of course it turned out delicious! These Chocolate Chunk Banana Nut Blondies are rich and chewy, with subtle banana flavor, crunch from the toasted walnuts, and gooeyness from the melted chocolate. Bet you won’t be able to have just one ;) enjoy! 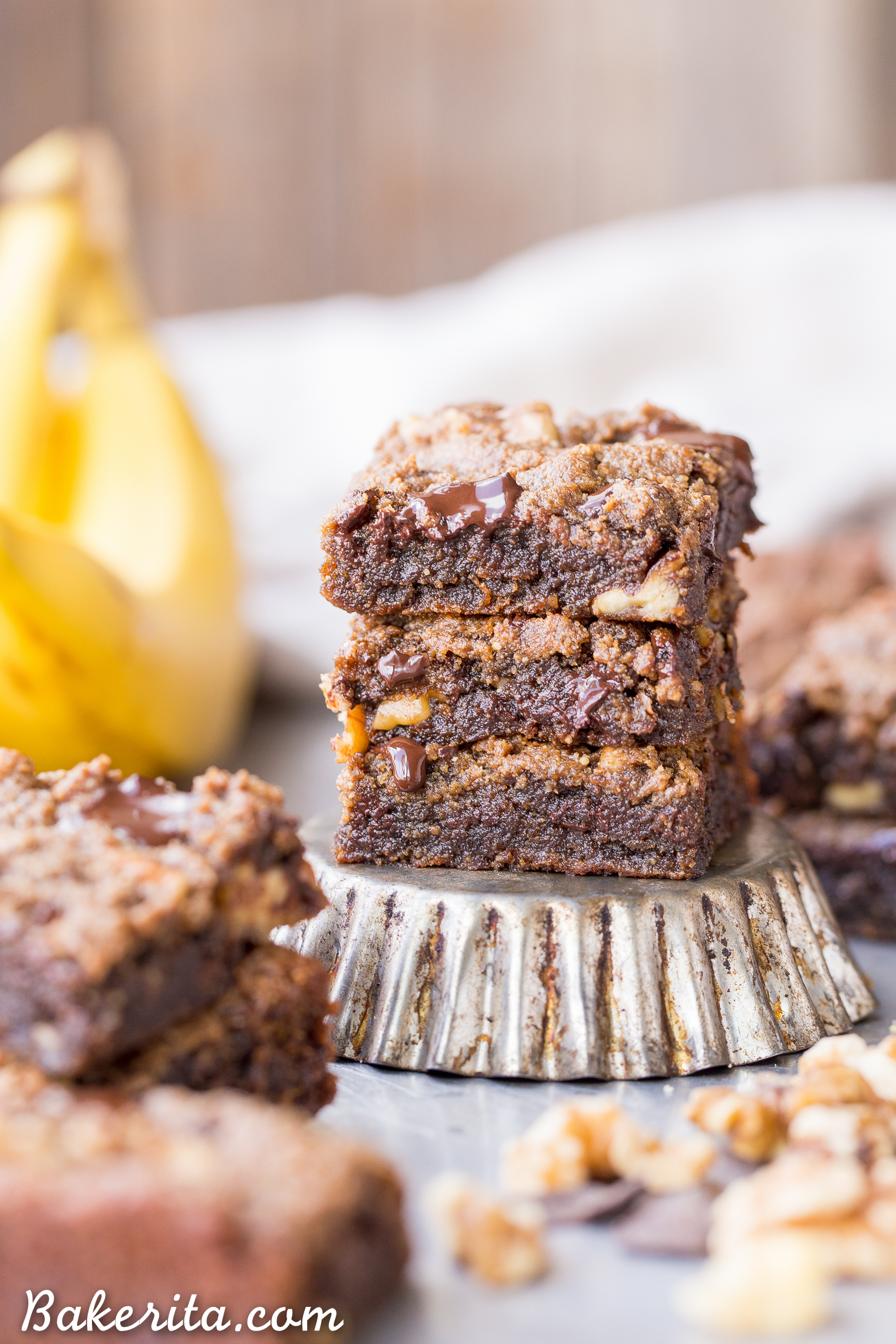