These Apple Blondies are full of warm spices and topped with an absolutely scrumptious (and SUPER easy) caramel glaze. These chewy, soft apple blondies are gluten-free, paleo and vegan. 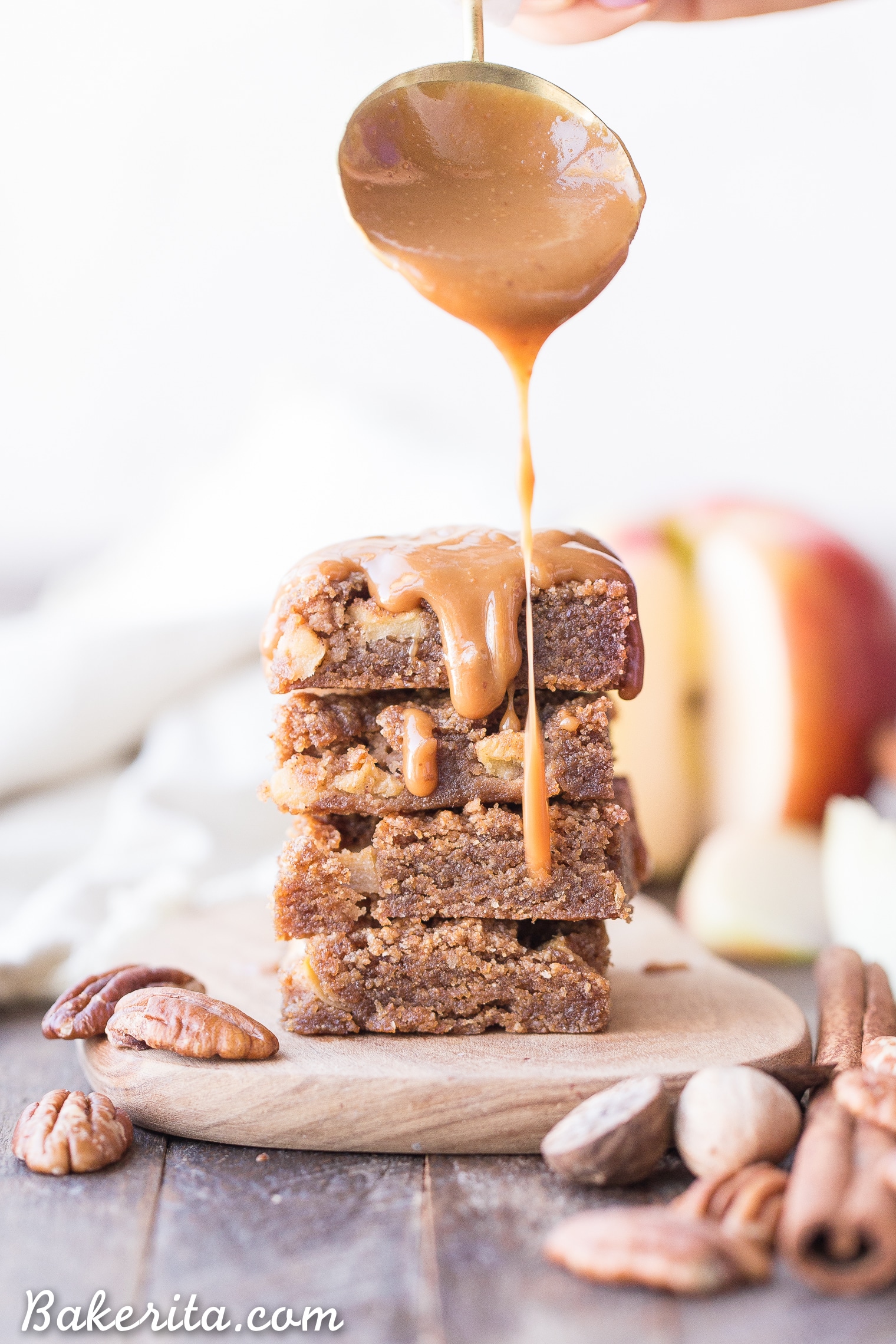 Alright I’ve finally taken a 5 minute break from drowning in everything pumpkin to tell you about my other (and first) fall flavor love: apples!!! I’m a NUT for apples – I love them so much, and some of my favorite desserts, apple crisp + apple pie, have them as the star.

They’re also delicious as a snack, sliced super thin and served with all. the. homemade. nut. butters.  But I digress, because today we’re not talking about nut butter, we’re talking about BLONDIES. And if you’re here, you probably love blondies just as much as I do (which is with all your heart). 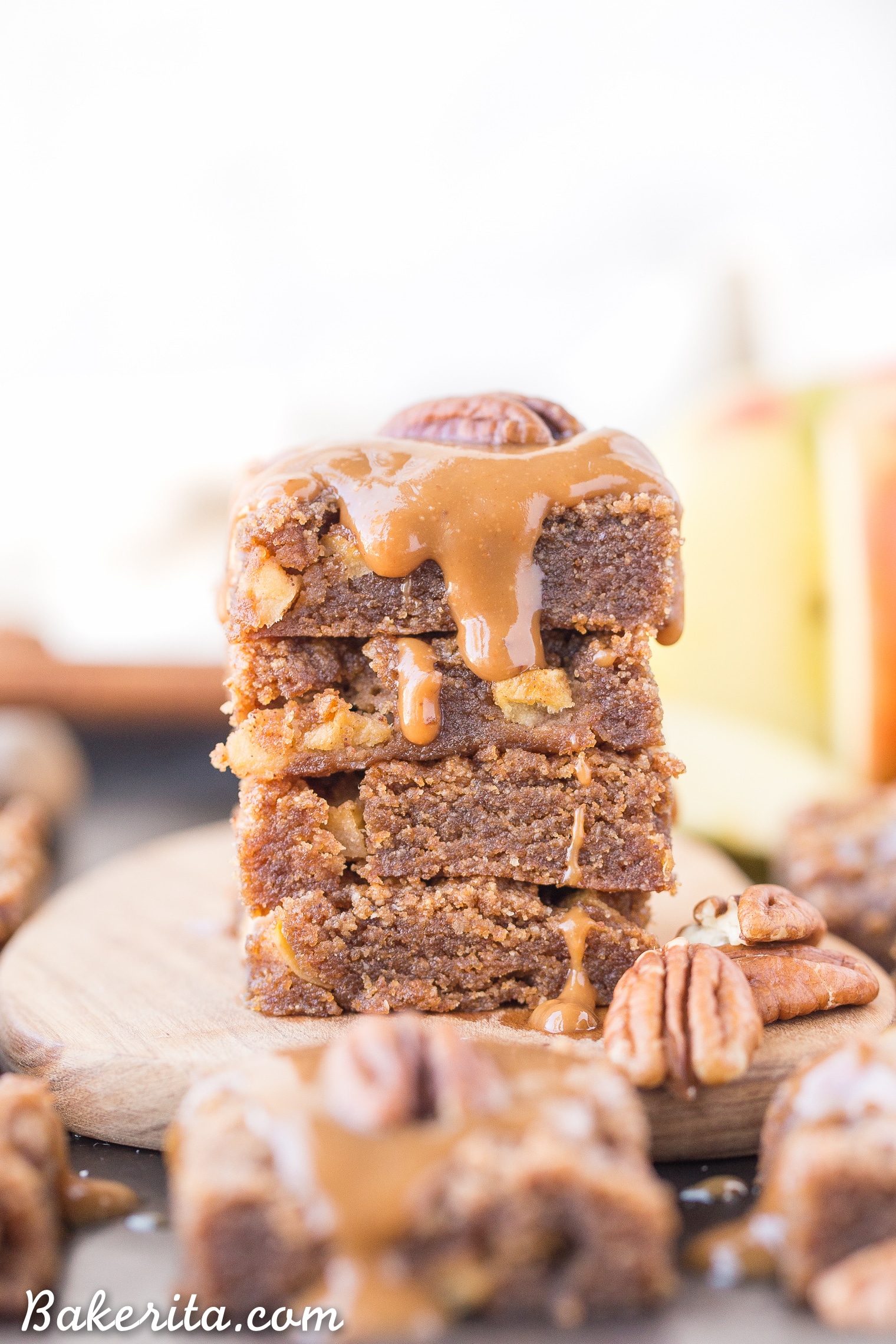 Blondies are essentially the blonde version of brownies, with nut butter to add richness, and the flavors of vanilla and spices taking over for the usual chocolate. This blondie is also studded with diced apple chunks, which add some texture and a burst of juicy sweetness.

Paired with the cinnamon, nutmeg, vanilla, and applesauce, you get a blondie that’s almost fudgy in texture, despite it’s lack of chocolate, and full of the flavors that make you get all the autumn feels. If you want a bit of crunch in there too, you can add chopped pecans or your nut of choice, but I prefer the crunch to be left to the topping. 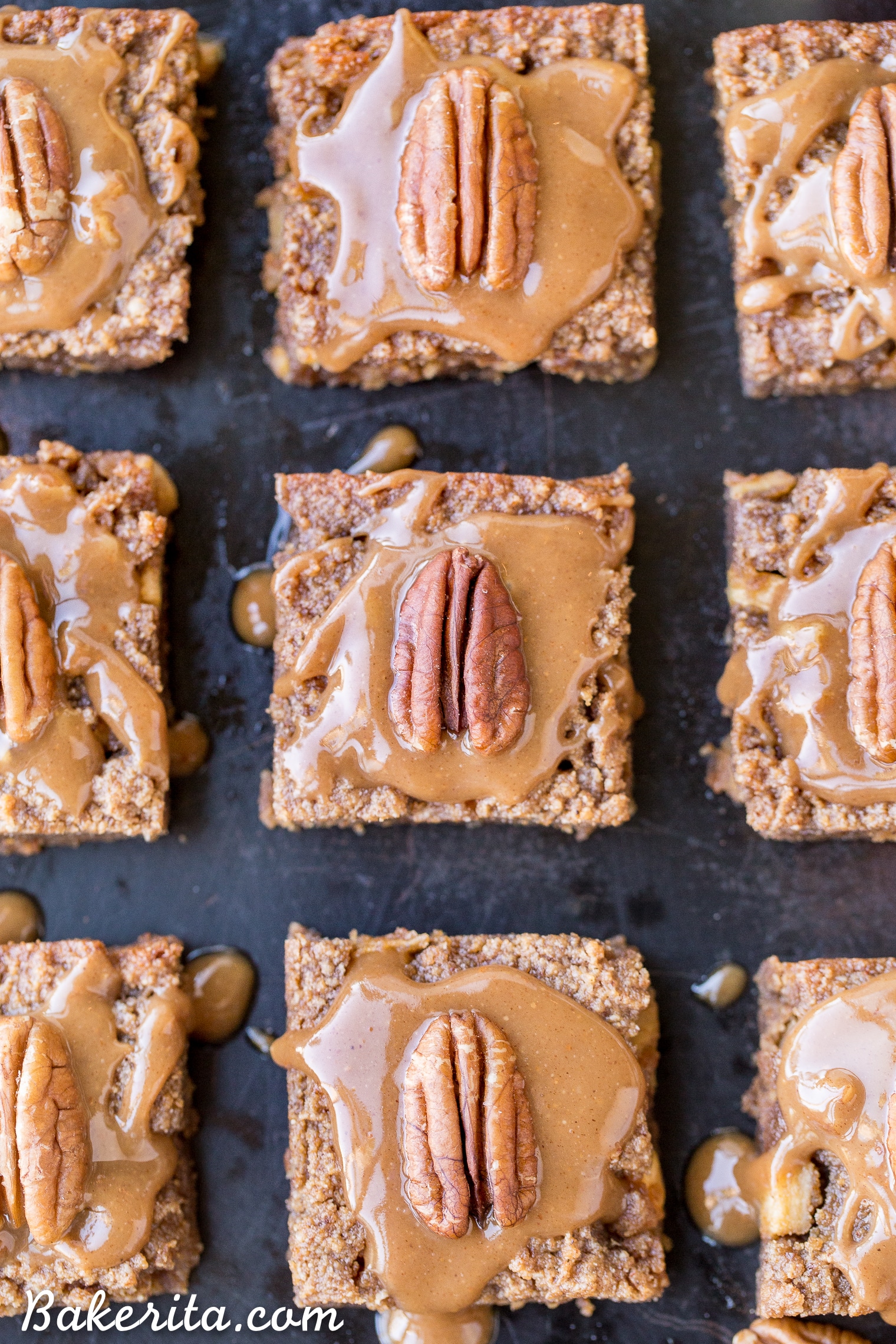 And about that topping…let’s talk about it, because it is GOOD and it is IMPORTANT. These blondies are dang good without the caramel glaze, but with it?? They’re out of this world. It honestly couldn’t be easier to make either, since it’s just three ingredients and you have to cook zero things.

I promise, once you discover this quick and easy caramel sauce/glaze, you’re going to want to drench it on top of everything you eat. Once it’s drizzled/slathered/drenched on top of all the apple blondies, garnish with a whole pecan. You could also do chopped pecans to disperse the crunch, but I just think the whole pecan on top looks so pretty 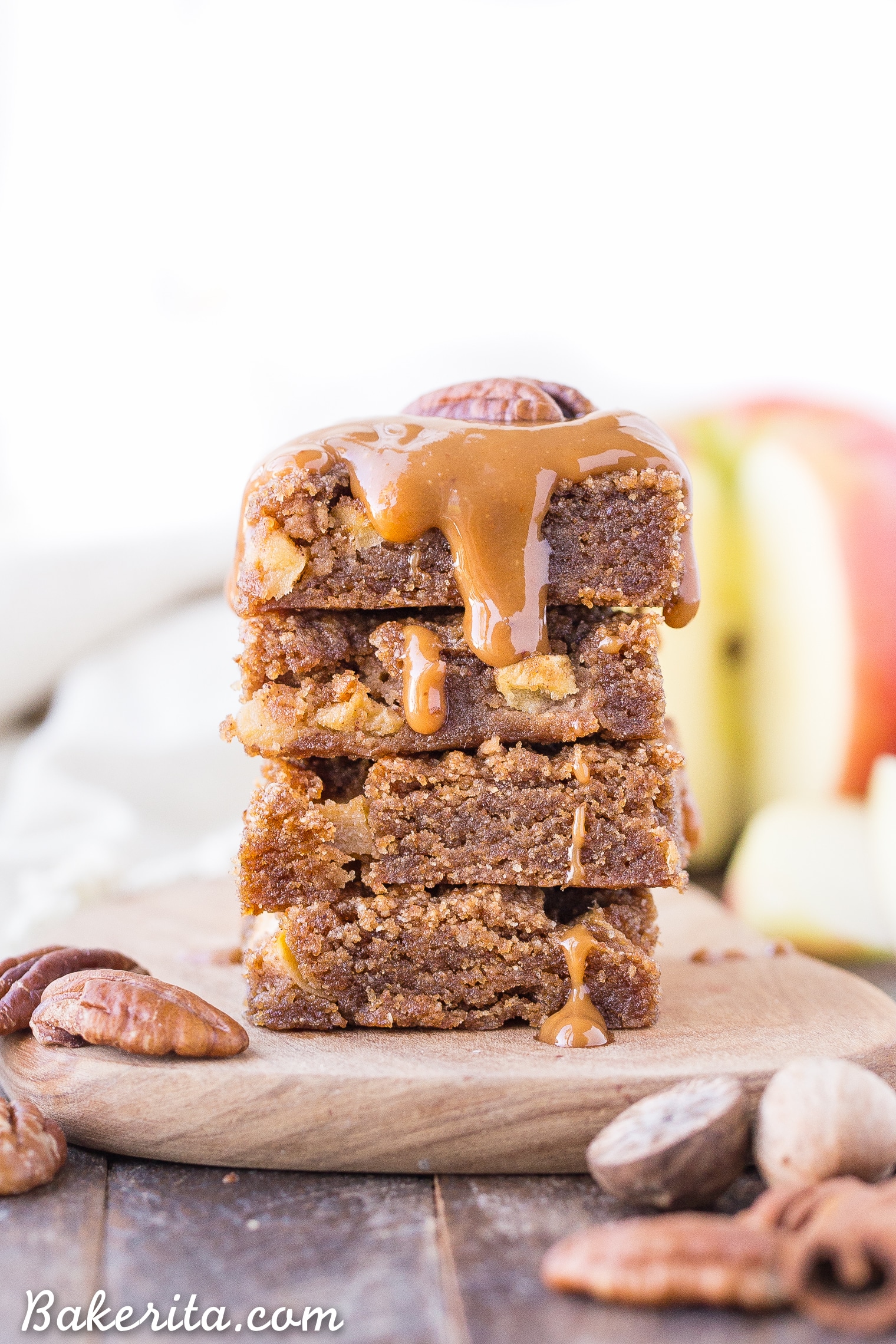 When the caramel sauce firms up, it gets fudgy and then melts in your mouth. The caramel flavor pairs perfectly with the cinnamon, nutmeg, and apple flavors, too. These were a perfect dessert at night with a cup of cinnamon tea – I savored each and every bite of this deliciousness. I hope you’ll give them a try and love them as I have! Enjoy. 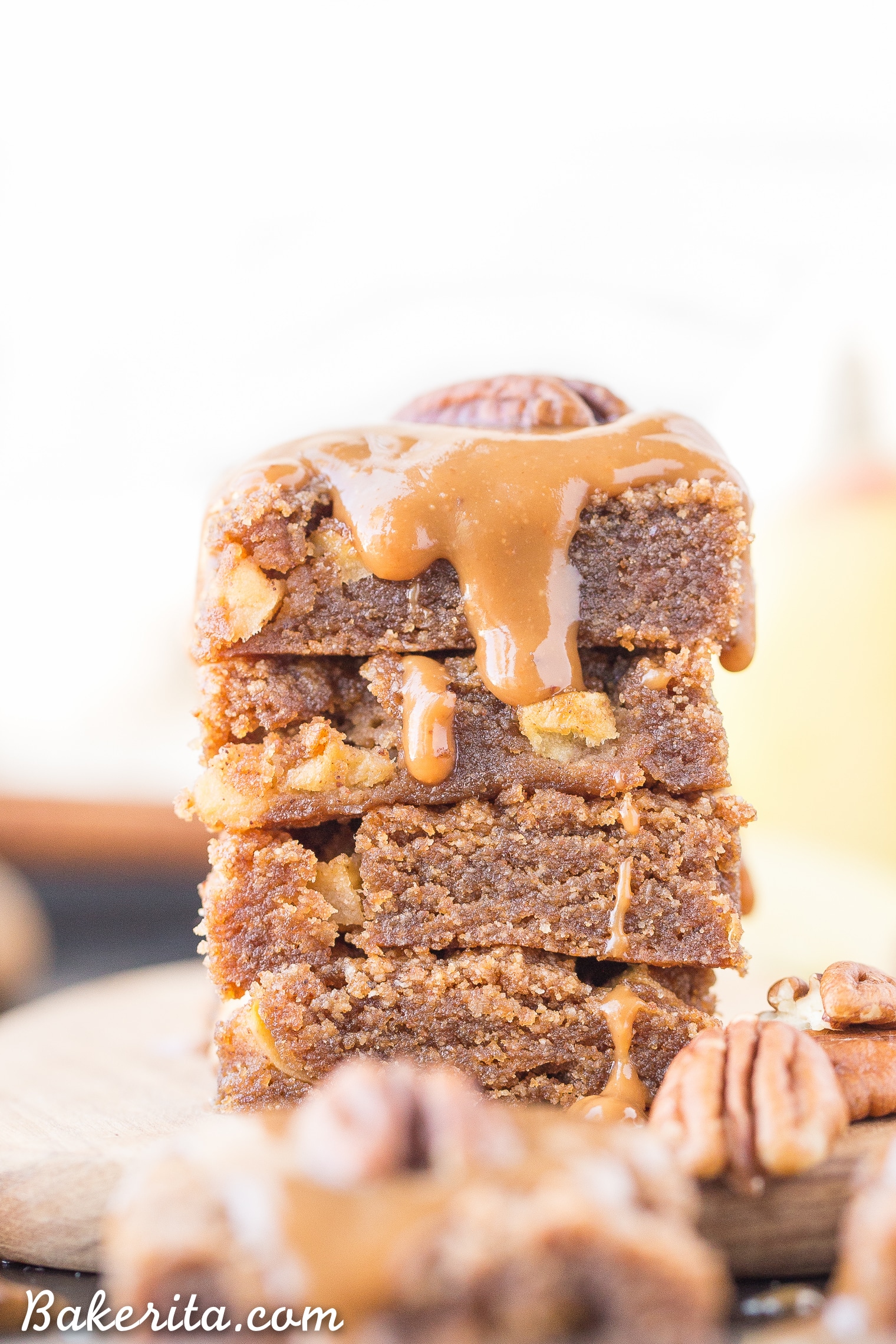 These Apple Blondies are full of warm spices and topped with an absolutely scrumptious (and SUPER easy) caramel glaze. These chewy, soft apple blondies are gluten-free, paleo and vegan.

For the caramel glaze

Nutritional info is calculated without the caramel glaze.