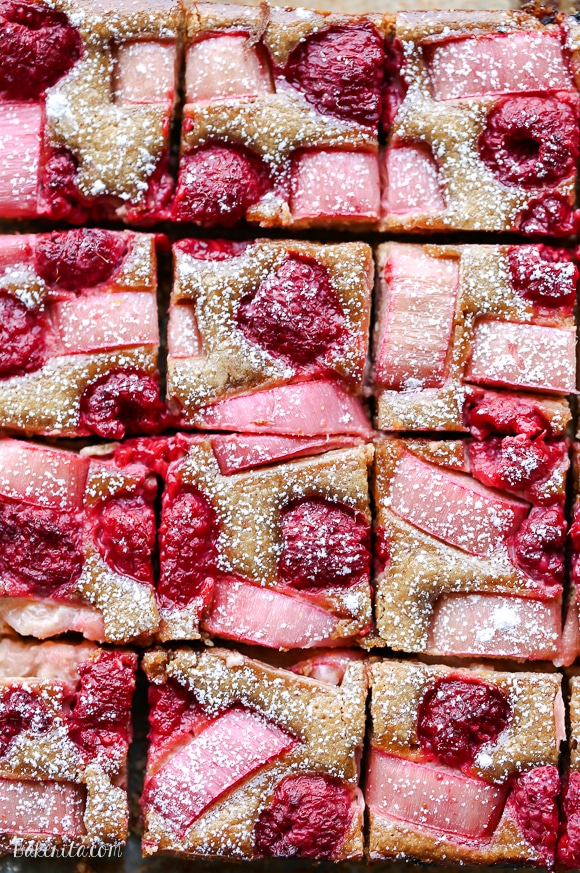 Before we talk about the swoon-worthy Raspberry Rhubarb Almond Bars staring at you, I have to make a little announcement! I haven’t officially mentioned it yet, but now that my moving van is scheduled and there’s boxes sitting in my living room, it finally feels real – and close. I’m moving back to San Diego! For those that don’t know, I was born and raised in San Diego, and I moved up to Washington when I was 17 to go to college at University of Puget Sound.

After graduating almost exactly a year ago (uhhh…WHERE did that year go?!?), I moved to Seattle, where I’ve run this blog, lived with one of my best friends, and baked my heart out for the past year with a beautiful view of the sound and a super cute patio (which I’m going to miss a bunch). 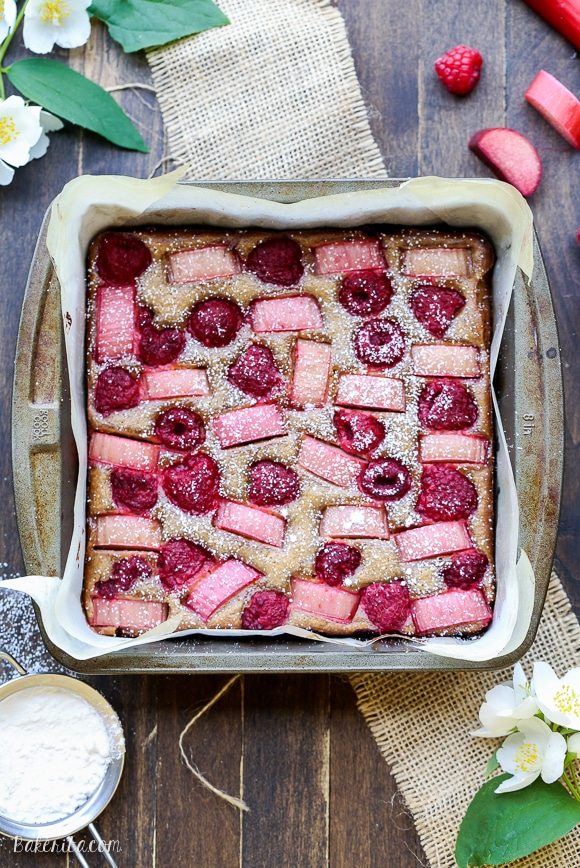 I know I’m going to miss Washington a whole lot. This place is enchanting, with the evergreen trees and misty days. When you’re blessed with the occasional sunny one, where the sun reflects off the water, it creates a place so beautiful you never want to leave. I’ve been going on walks pretty much every day this Spring, trying to soak up as much of the Washington air and energy as I can before I leave.

Not that San Diego lacks in physical beauty – far from it, but it’s different. California is bright and bold and energizing, whereas Washington is calmer, but invigorating and stimulating in it’s own way. Of course, I’ll also miss my friends – but I can’t let myself think about that just yet. 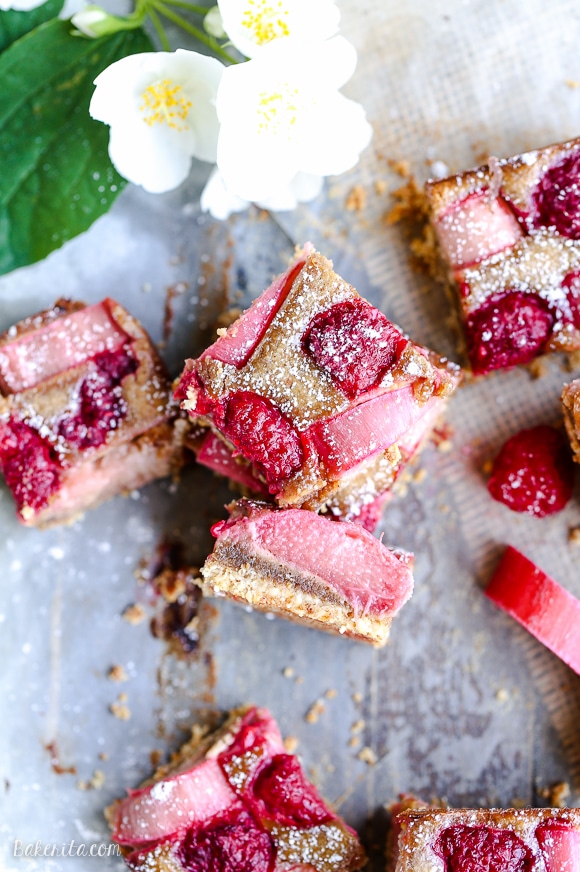 One of the things I’ll miss most about Washington is the produce. Rhubarb is scarce is California, so I’ve been grabbing as much as I can whenever I see it at the farmer’s market, determined to get my fix. Quite a lot of that rhubarb has gone towards the testing of those bars, and even though the first and second batches had a totally burned bottom, they looked so pretty I just couldn’t give up on the testing.

I was posting about the drama of my burned crust on Snapchat (add me at bakeritablog to see all future mishaps!) and after receiving words of encouragement from a bunch of you, I tested again until the crust was perfectly golden. And ding ding ding! We have a winner. 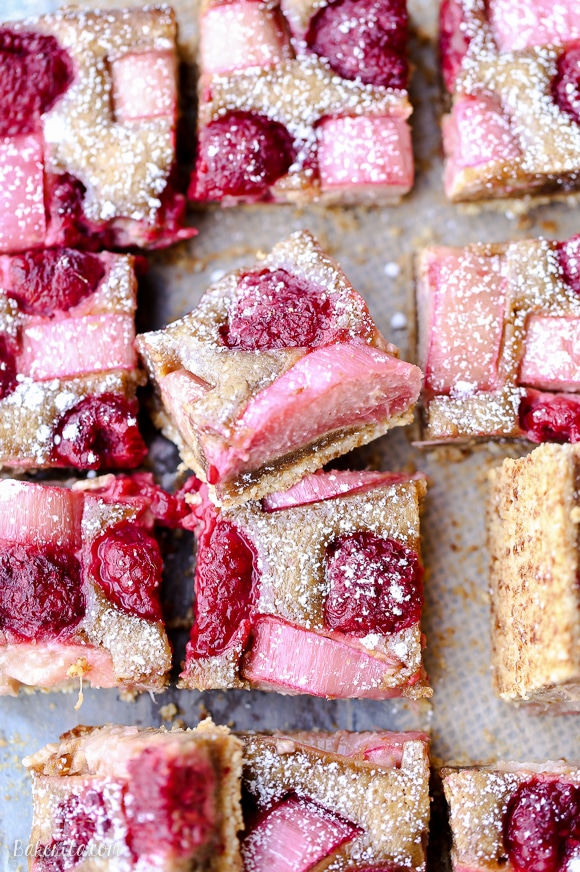 The new crust is made primarily with almond flour, making these bars super duper almond-y, especially paired with the frangipane-style filling. It also has some tapioca flour to help bind the almond flour crust a bit better, coconut sugar to sweeten, salt, and melted coconut oil. It takes like 3 minutes, maybe, to stir it together and then press into the pan.

The filling is a similar to a frangipane, which is a fluffy almond paste that bakes into a gooey, fluffy texture that pairs perfectly with the raspberries and rhubarb. My take, of course, is Paleo-friendly. It starts in the food processor or a high-powered blender. Almonds, a bit of tapioca flour, coconut sugar, and salt and pulverized into a powder, and then coconut oil, an egg, and vanilla are added until it’s a smooth paste. 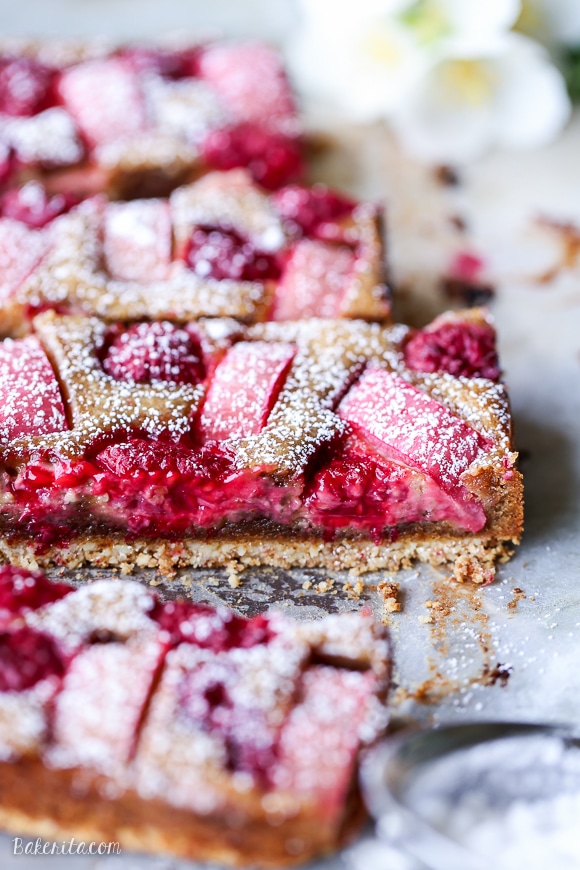 That paste is spread over the crust, which is then adorned with lemon-scented rhubarb slices and bright raspberries. In the oven, the almond filling puffs up around the fruit, which softens and melts into the filling. The crust firms up and forms a crisp bottom.

The resulting bar is a bite of pure Spring perfection! The rhubarb and raspberry are both bright, tart flavors, and the sweet frangipane almond filling balances them beautifully. The crust provides the perfect amount of crunchy contrast. 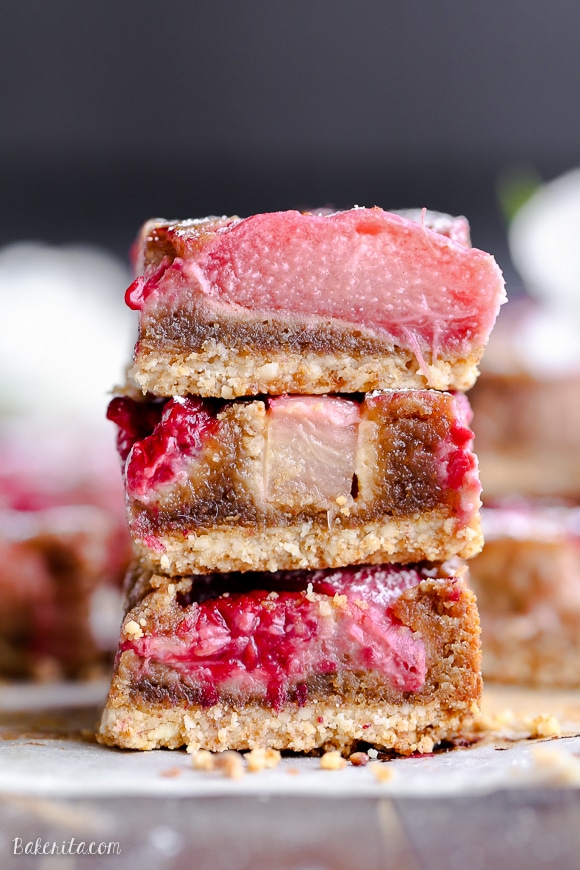 I also sprinkled a teensy bit of totally-not-Paleo powdered sugar on top of the bars, but that was mostly for aesthetics. It won’t affect the taste to leave it off if you want to avoid the refined sugar entirely, but it was also only about 1 tablespoon of powdered sugar for all the bars, so I wasn’t too concerned. You do you – they’re beautiful with or without the powdered sugar!

I’d like to note that while I’m writing this…I just ran inside to grab a glass of water, and ended up devouring one of these bars. It was gone in about 15 seconds, so I guess that can help attest to how delicious they are. Seriously, go get yourself some rhubarb and get baking! Enjoy :) 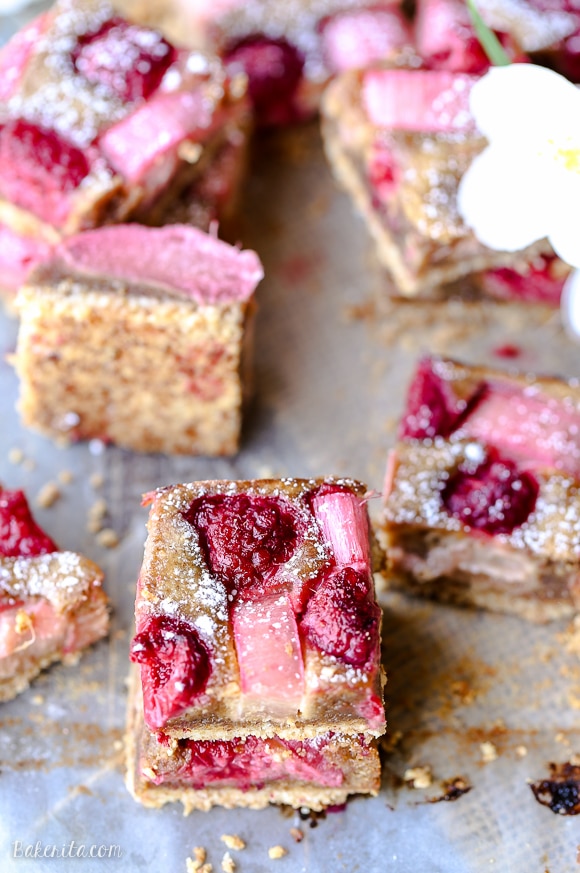