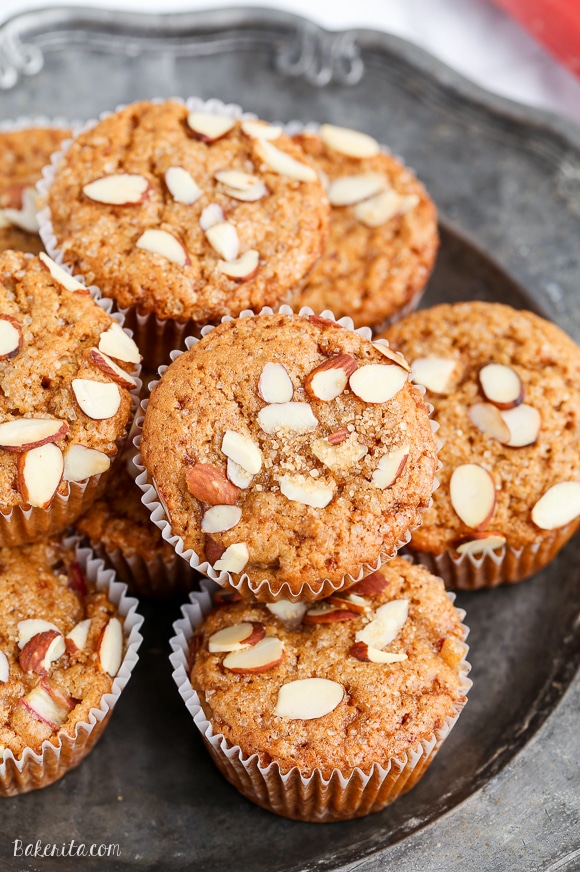 Folks, we’ve had a long road of rhubarb recipe testing to get us to this point. I randomly found rhubarb way back in early February before the season really started and posted this Strawberry Rhubarb Crisp recipe, but back then no one else had found rhubarb yet so I was alone in my rhubarb excitement.

Now, rhubarb has taken OVER the entire food internet, and of course until a few weeks ago, I couldn’t find any more rhubarb ANYWHERE. Then, finally, a few Sunday’s ago, I saw bunches of it piled on the tables at my local farmer’s market. 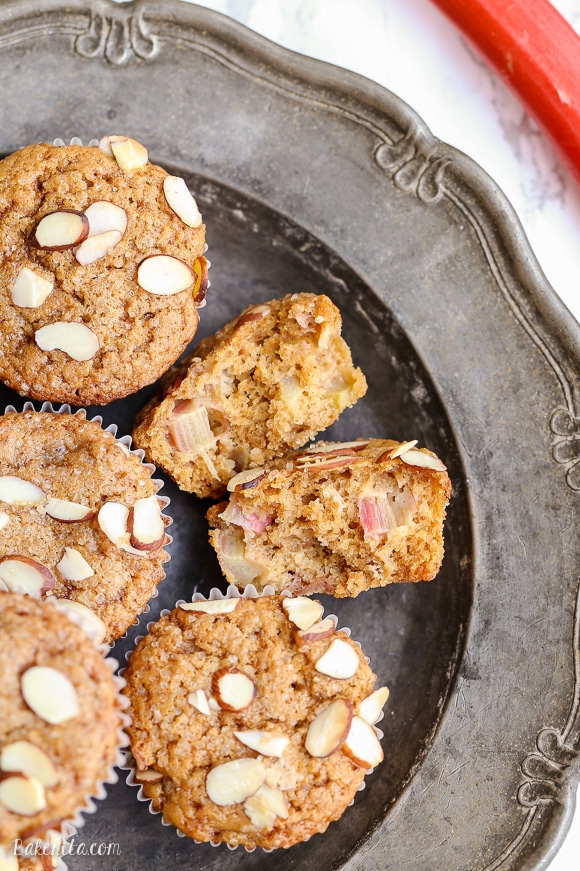 Of course, I grabbed more of it than I knew what to do with and started testing rhubarb recipes galore in my kitchen. And had recipe fail, after fail, after fail…it seemed as if the universe did NOT want me to be enjoying delicious rhubarb baked treats this year. And that, my friends, was making me very sad, because I want me and rhubarb to be besties.

And on that pursuit to best-friendship, I will not give up – especially when I know rhubarb will be disappearing again until next Spring rather shortly. Thankfully, after a couple not-so-good batches, I got these vegan rhubarb muffins down. There’s also a few other finnicky rhubarb recipes that have been making me want to pull my hair out, but I am determined to perfect them and get ’em to you before rhubarb disappears again. Send me good rhubarb vibes! 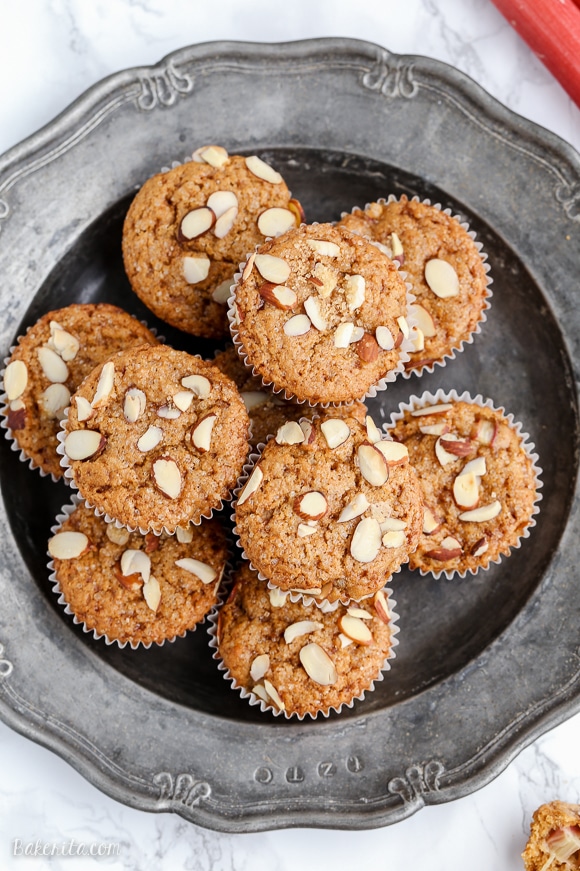 But back to these muffins! They’re quick and simple to throw together (like all good muffin recipes should be) and they highlight the tart and tangy flavor of the rhubarb. Rhubarb is so often paired with another fruit, like strawberries, in baking recipes, but I love to highlight the flavor of it all on it’s own.

When developing this recipe, I consulted the rhubarb page of The Flavor Bible (which EVERY cook and baker should have…I seriously have this book open constantly on my desk and I no doubt use it every. single. day.) and saw that cardamom was a recommended spice pairing. I rarely use cardamom, but I had some in my spice cabinet so I added just a hint to these muffins. I adored the slightly lemon-y note that the cardamom added – it paired so beautifully with the rhubarb! Of course, if you don’t have any or aren’t a fan, it can be skipped or replaced with a little cinnamon. 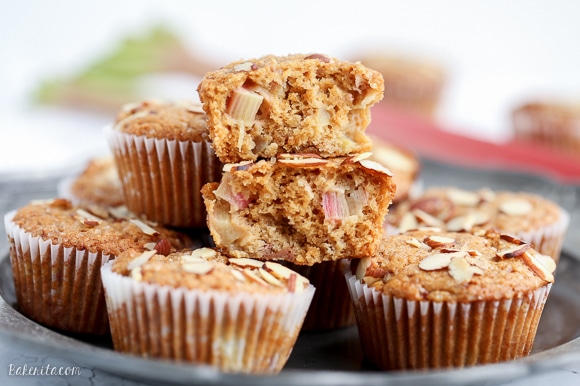 I kept these rhubarb muffins both refined sugar free and vegan as well. The moisture and binding properties of the egg were replaced with applesauce, and I used almond milk in place of regular (though rice, soy, or coconut milk would also work). For the sweetener, I switched out the regular sugar for coconut sugar, which leaves the muffins a little more brown than other muffins – I promise, they’re not over-baked! 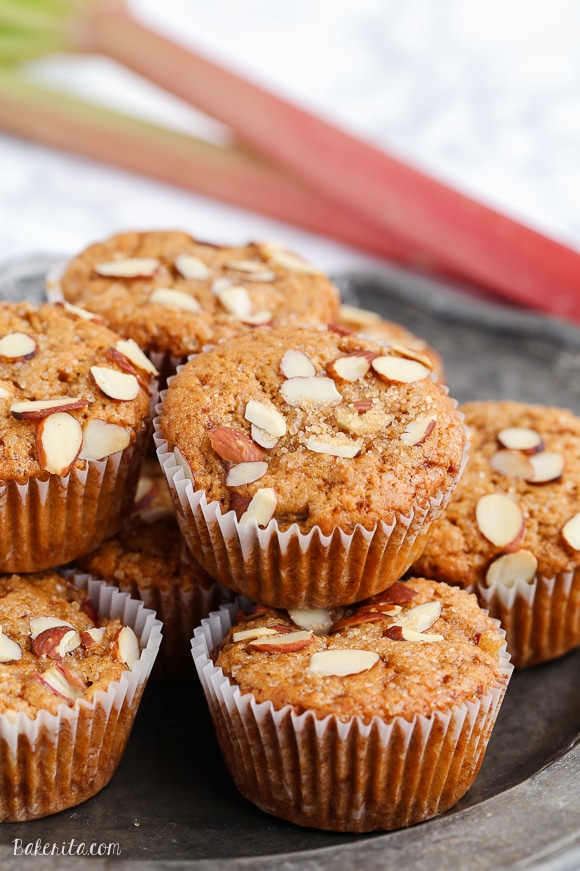 These muffins are super moist and fluffy, and the rhubarb almost melts into them, creating these little pockets of juicy tartness! I like a little texture, so I threw some sliced almonds on top for some crunch too. Make a batch of these to keep around for breakfast or a snack – they’d also be a great addition to your Mother’s Day brunch. Go get your hands on some rhubarb and enjoy!

who else could use a VANILLA BEAN SCONE to get you

gf vegan SOURDOUGH SCONES 🙌✨ I had to. You kn