A slice of this gluten-free and vegan Cinnamon Swirl Banana Bread makes the perfect easy breakfast, snack, or even dessert! This soft and sweet loaf is especially delicious when slathered with some vegan butter or nut butter. 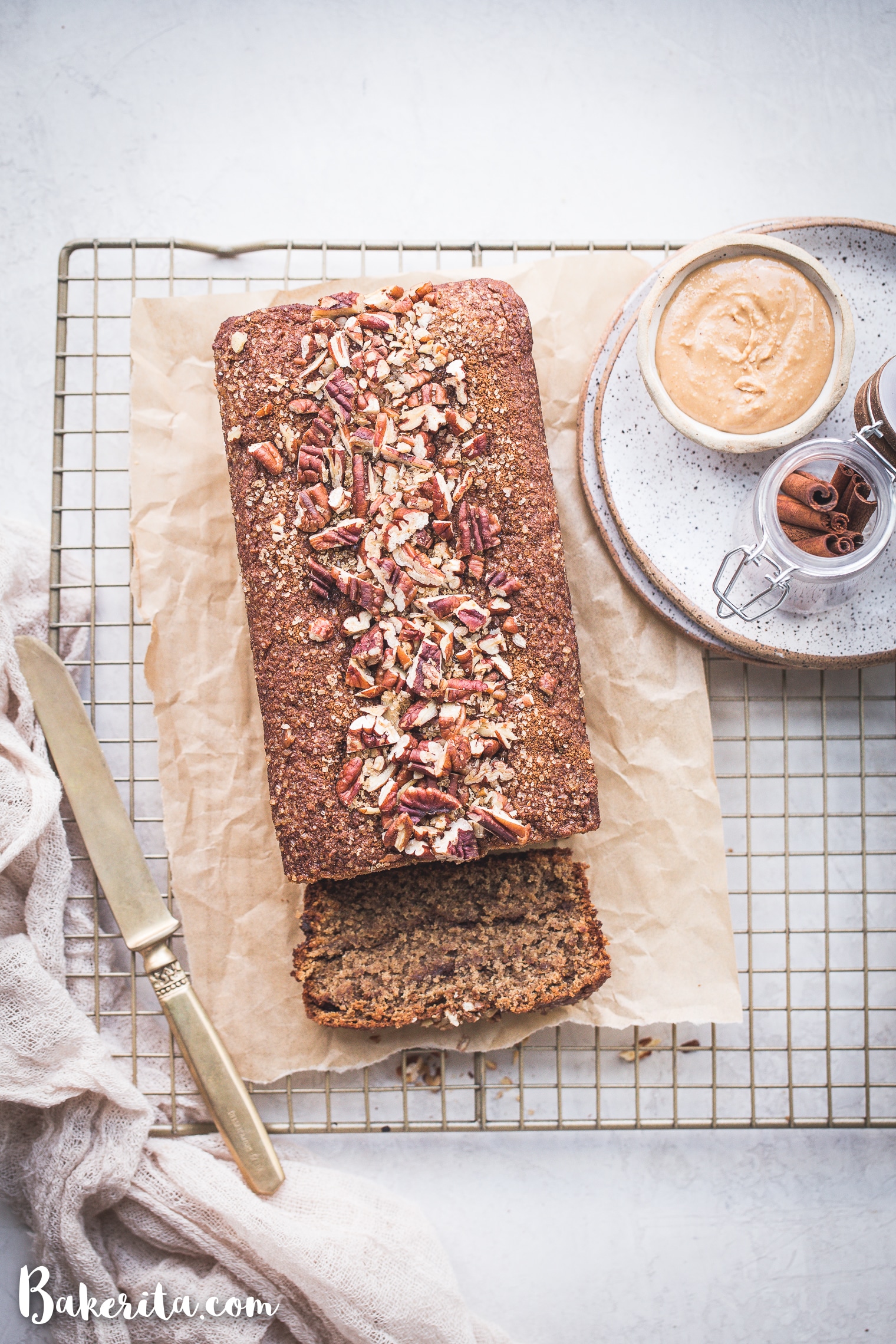 The first night that I tested this Cinnamon Swirl Banana Bread, it came out of the oven around 10:30 pm. By the time I went to bed, about 1/4 of the loaf was gone 😳 whoops! Usually, I let loaves cool overnight before cutting into them, but with the scent of cinnamon, sugar, and sweet ripe bananas permeating my apartment, I couldn’t resist cutting into the warm, cinnamony loaf.

I mentioned in my last post that I just finished writing my first cookbook, and while I thought I would want to take a little time to decompress and take a break from baking/writing/photographing, the opposite was true. As soon as I turned in my manuscript, I itched to get back into the kitchen to make new recipes that I could share with you now. 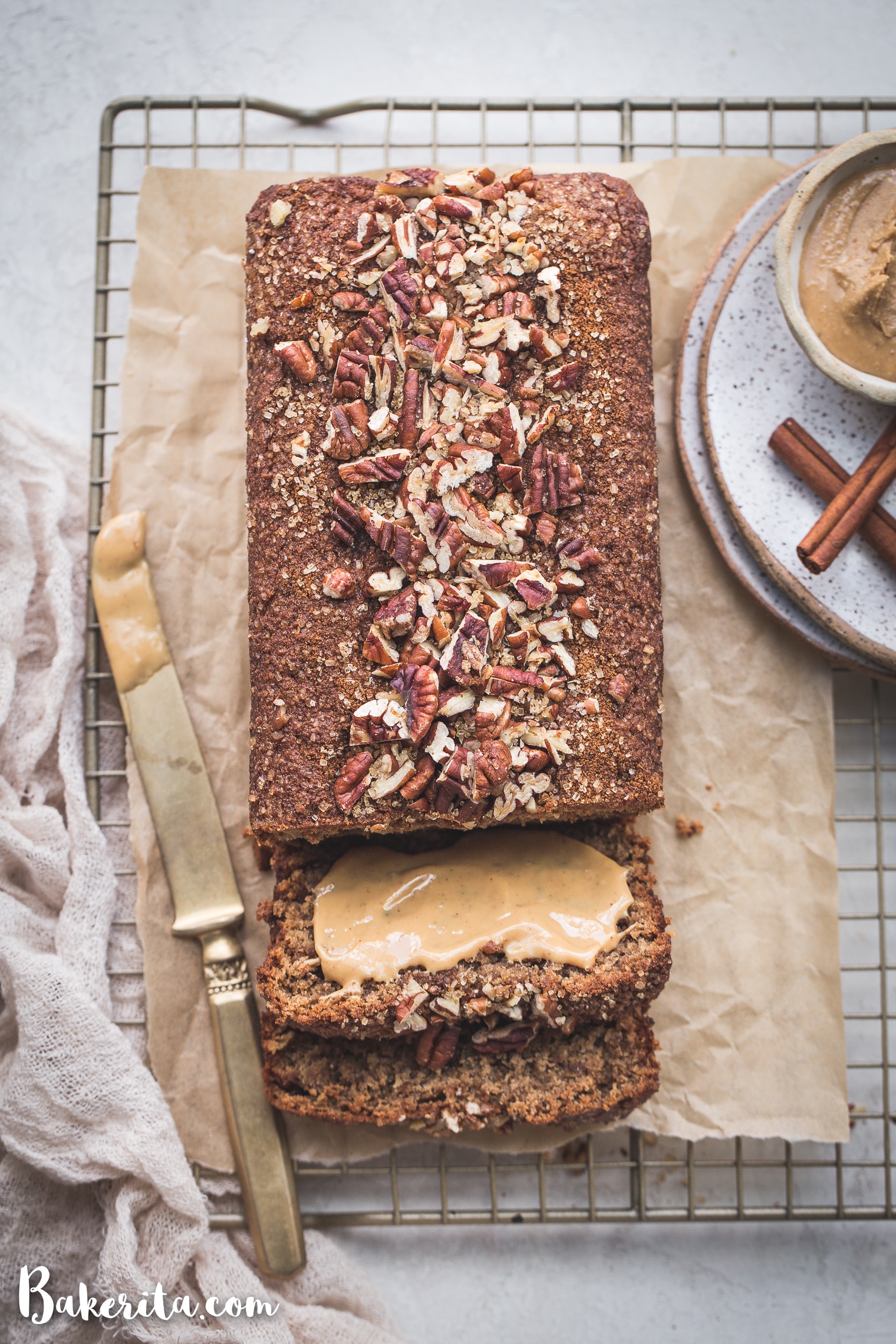 I’ve missed sharing the creations I’ve come up with as soon as they come out of the oven, and it fills me with joy to be able to share new recipes with you again. This Cinnamon Swirl Banana Bread was one of the first recipes I finished post-cookbook, and it brings me so much joy to be bringing it to you now.

About the Cinnamon Swirl Banana Bread…

This recipe is one of my new favorites, as most things with cinnamon tend to be. The banana bread itself is made with a full cup of mashed ripe bananas, which helps keep the texture super soft and tender, and of course, full of banana flavor. I used cashew butter to help with moisture and tenderness as well, but you can use any nut butter you like – I find cashew butter just has the most buttery flavor, which works so well here. 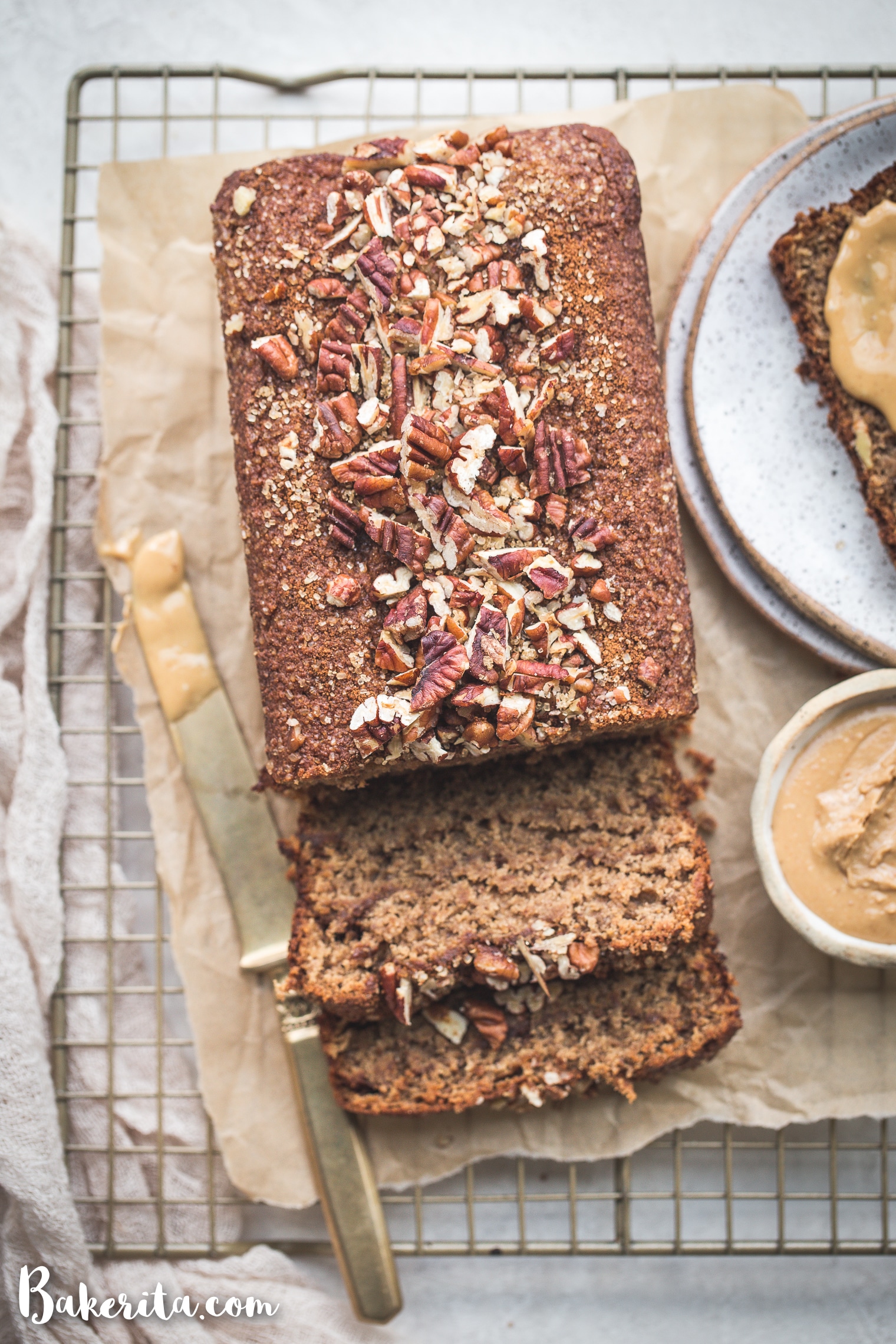 A combination of almond flour and gluten-free oat flour make for a texture that’s not too dense or gummy, and of course, a hearty dose of cinnamon is mixed into the batter to add a delicious warm flavor. The banana bread batter is layered with cinnamon sugar, which after being baked, creates ripples of cinnamon sugar goodness in every bite.

And the cinnamon sugar pecan topping!

For the topping, we used more of the cinnamon sugar mixture, and then top with pecans for crunch (though any nut could be used here) and raw turbinado sugar, which adds texture, sweetness, and a beautiful shimmer to the top of the loaf. The topping takes the loaf from great to outstanding, so I wouldn’t skip it. 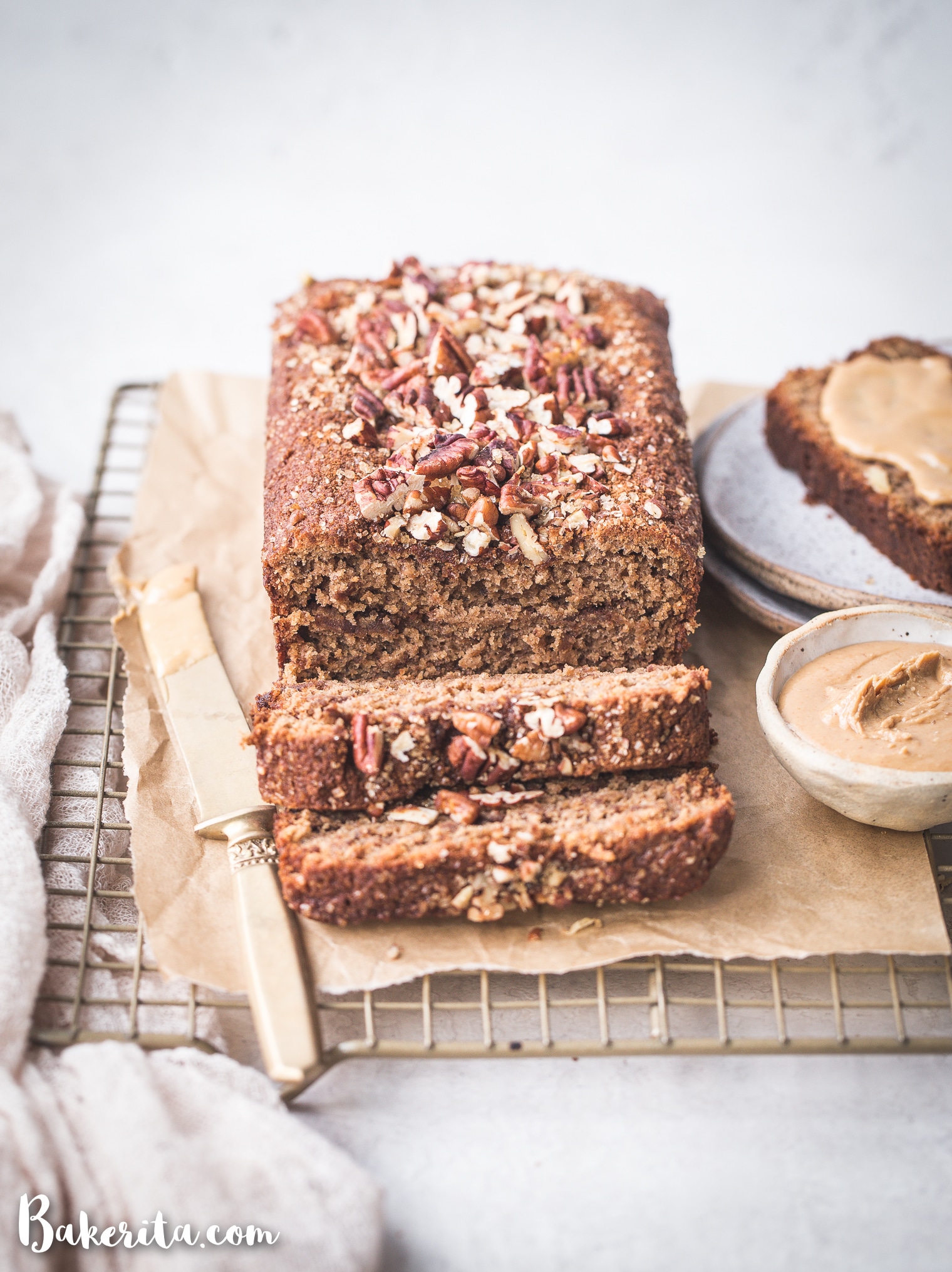 Slices of this cinnamon sugar banana bread are more than good on their own, but even more delicious and filling when slathered with a little bit of nut butter. I loved it with both cashew butter and peanut butter.

This Cinnamon Sugar Banana Bread got rave reviews from everyone I shared it with (which was a lot of people, because I needed to get it out of my house so I didn’t eat it all myself). I hope you’ll love it just as much as we all did! :) Enjoy, my friends! 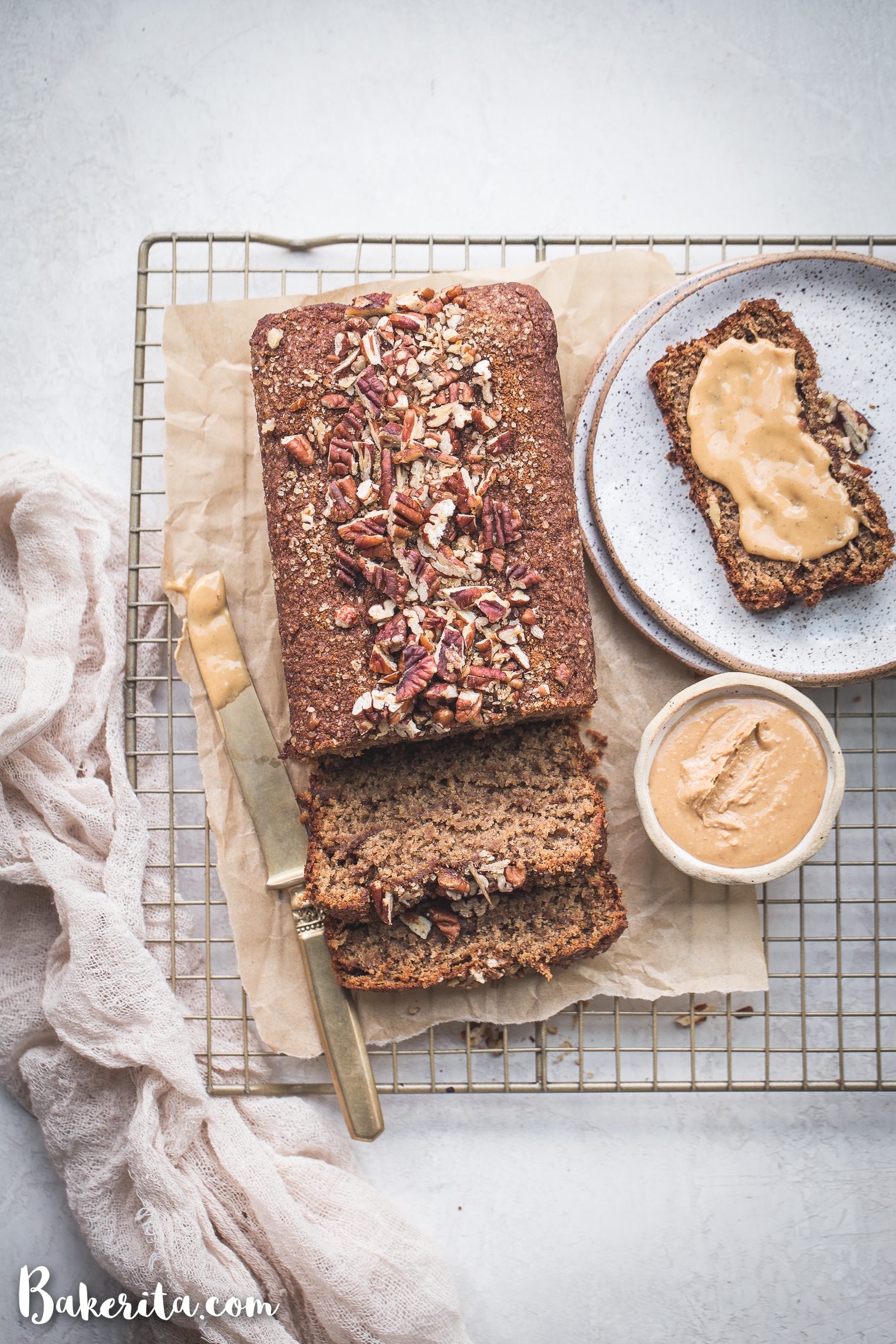 A slice of this gluten-free and vegan Cinnamon Swirl Banana Bread makes the perfect easy breakfast, snack, or even dessert! This soft and sweet loaf is especially delicious when slathered with some vegan butter or nut butter.

For the banana bread

For the cinnamon swirl & topping 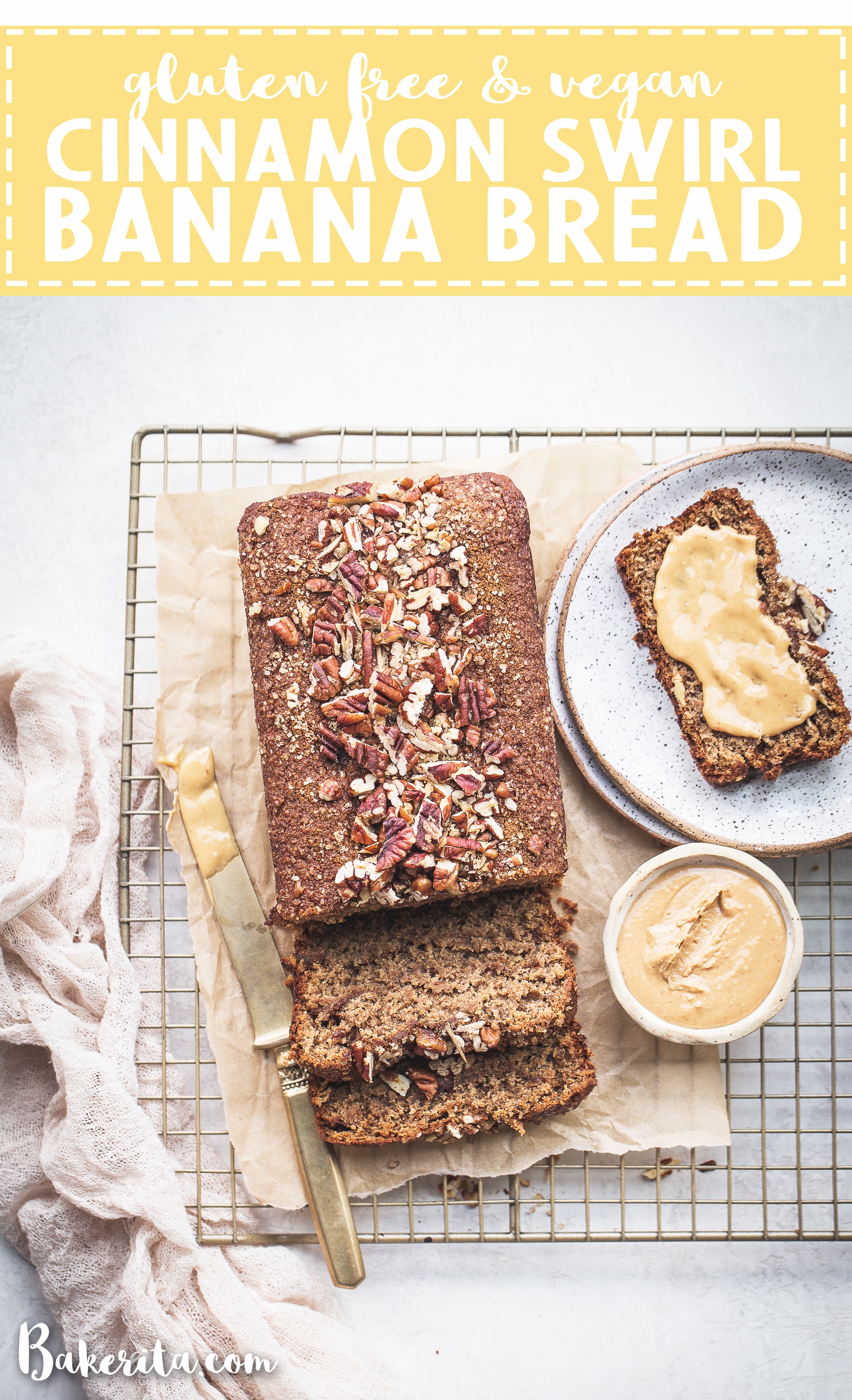