These Granola Breakfast Tarts with Sauteed Apples + Coconut Yogurt are an incredible breakfast treat that’s so good, you’ll think it’s dessert! The granola crust is spread with creamy dairy-free coconut yogurt and topped with cinnamon sauteed apples. This gluten-free, paleo and vegan breakfast is the perfect holiday morning breakfast, or to make any morning more special. 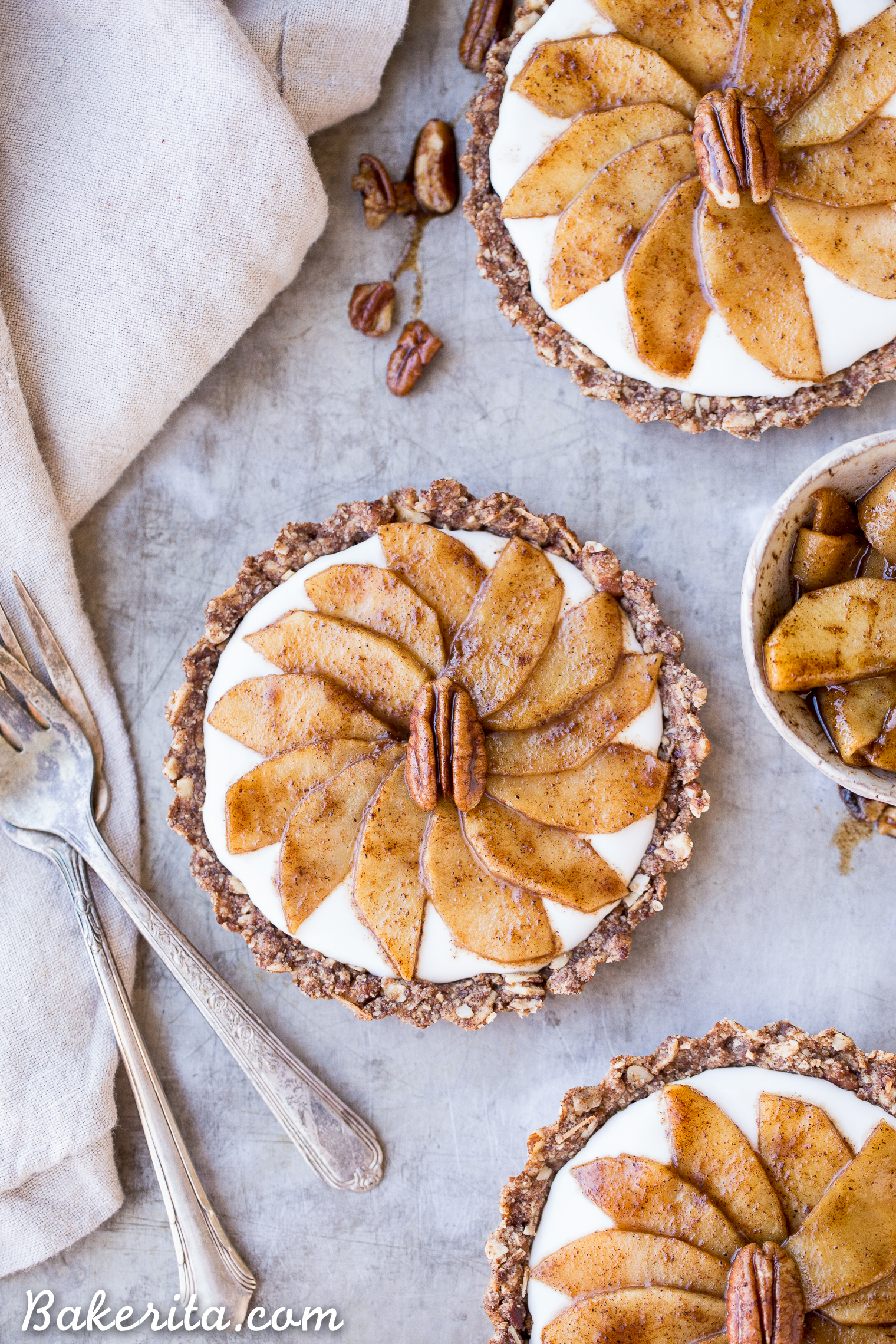 Have you ever had a tart for breakfast before?! Besides the leftover slices of your dessert tart from the night before…what I should have asked is if you’ve ever had a breakfast tart before. A tart designed with your health and day in mind to be a filling and fueling meal.

If your answer is no…you’re seriously missing out on some delicious morning goodness. These Granola Crusted Breakfast Tarts with Greek Yogurt + Berries was my first foray into the world of breakfast tarts…and it’s taken me a year to venture back into breakfast tart territory, which is madness! More needed to come into this world. Because when you have a breakfast that is healthy but resembles a dessert to start the day? Your day is definitely better. 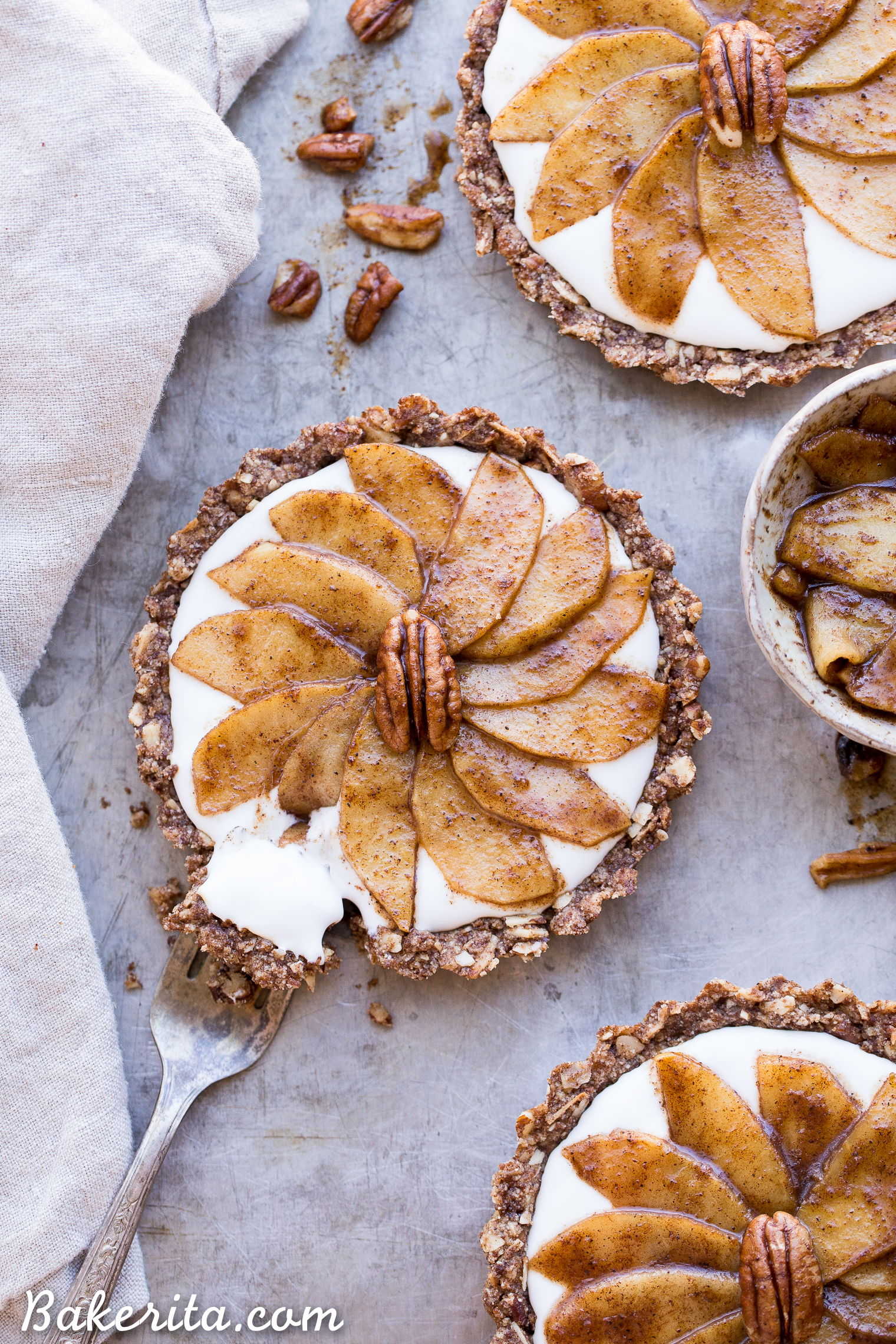 One day, while looking at the photos from my first breakfast tart, I remembered the coconut yogurt from my local farmer’s market sitting in the fridge, and then the apples I had also picked up at the farmer’s market. I kneeew that the crust + coconut yogurt + sauteed spiced apples would taste like a scrumptious, creamy apple pie – FOR BREAKFAST!

I was definitely right. I adjusted things from the first time around though. One of the biggest changes was ditching the oats in the crust to keep this recipe entirely paleo and grain-free. I switched out the rolled oats for sliced almonds and flaked coconut that had been roughly chopped. The little, flat bits resembled oats and kept the similar texture perfectly. 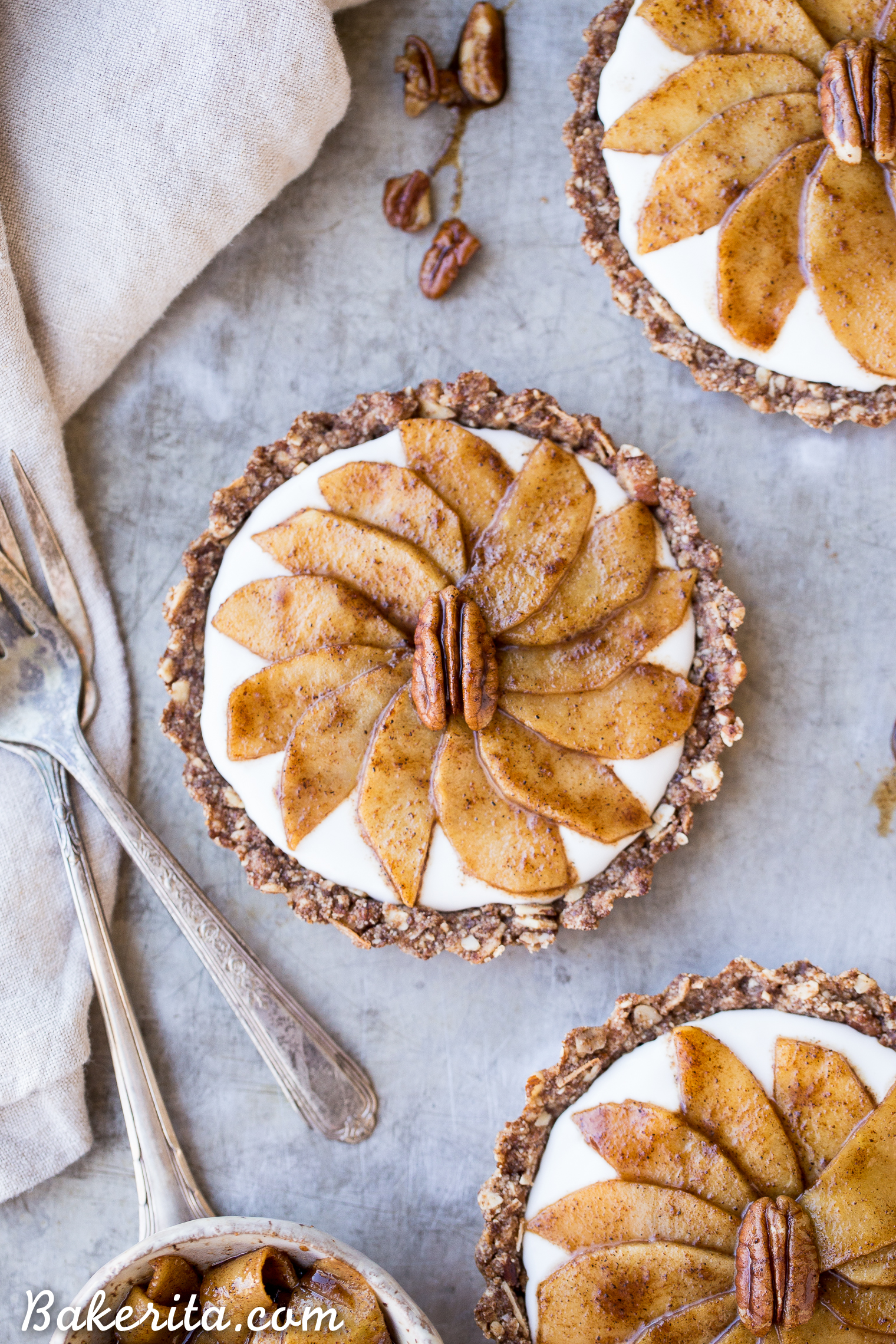 The crust is baked until nice and crispy, and once they’re cooled, you can keep them like that until you’re ready to use. They can be stored in a plastic ziplock bag or tupperware in the fridge if you’re using within 5 days, or in the freezer wrapped in plastic wrap and foil.

Orrr…you can just build them and eat them right away! When you’re ready to eat, just slather the crust with coconut yogurt or any other dairy or dairy-free yogurt you’d like. Then make the soft, spiced sauteed apples to spoon over the yogurt. 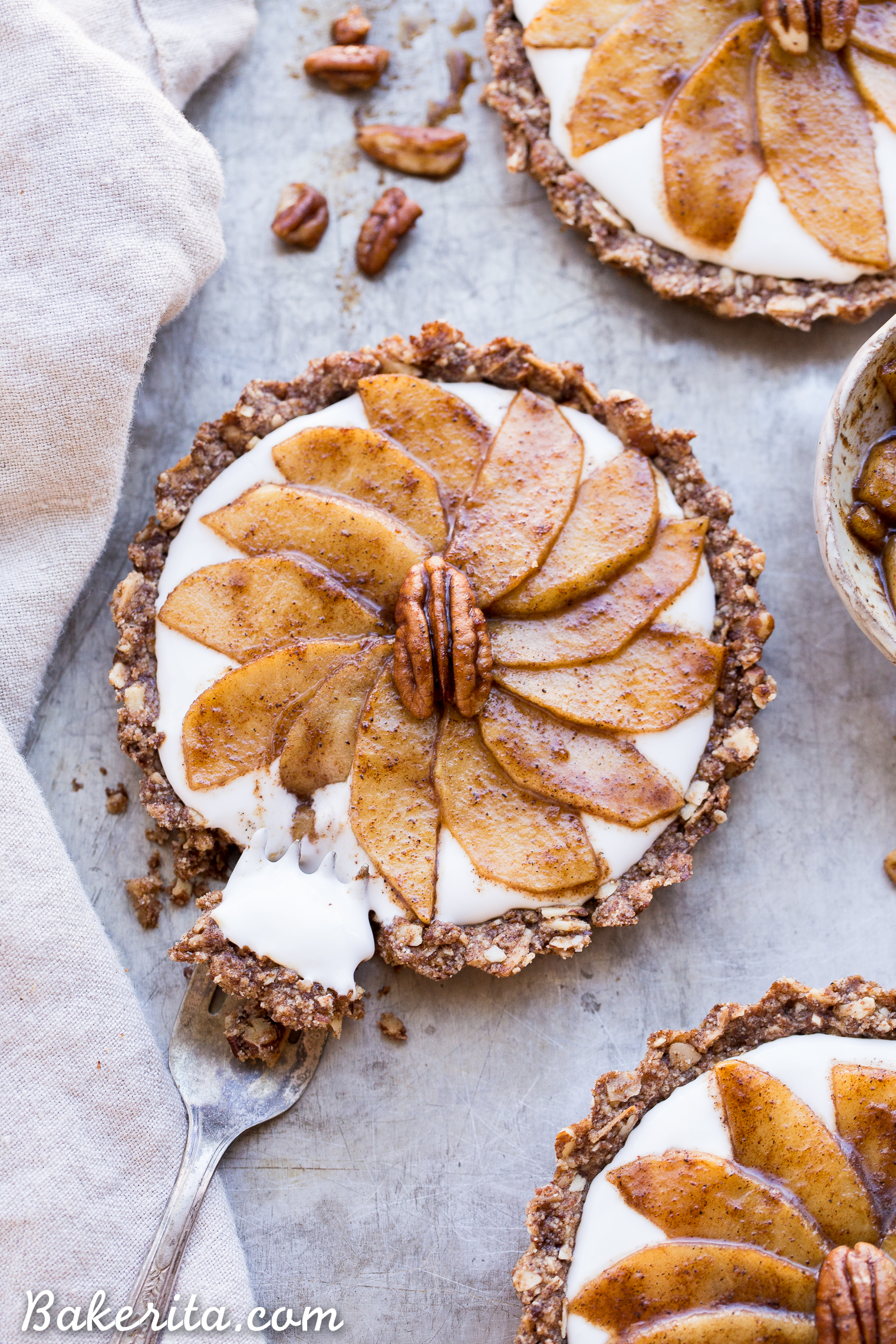 Now, I made my sauteed apples with apple slices, so I could arrange them in a pretty pattern for pictures. In fact, I wish I had just chopped them into cubes and sauteed them, so that it was easier to eat and there would be more apple in each bite. I recommend you do as I say, not as I do, unless you’re overly concerned with how pretty they’re gonna be too :) let me also note, they’re still going to look SO delicious with the chunks.

So, your apple chunks get sauteed with coconut oil (or ghee…swoon!), a touch of maple syrup, cinnamon, pecans, vanilla bean powder, and salt. They’re cooked until they’re just softened around the edges, and still have a bit of crunch in the center. Perfection. 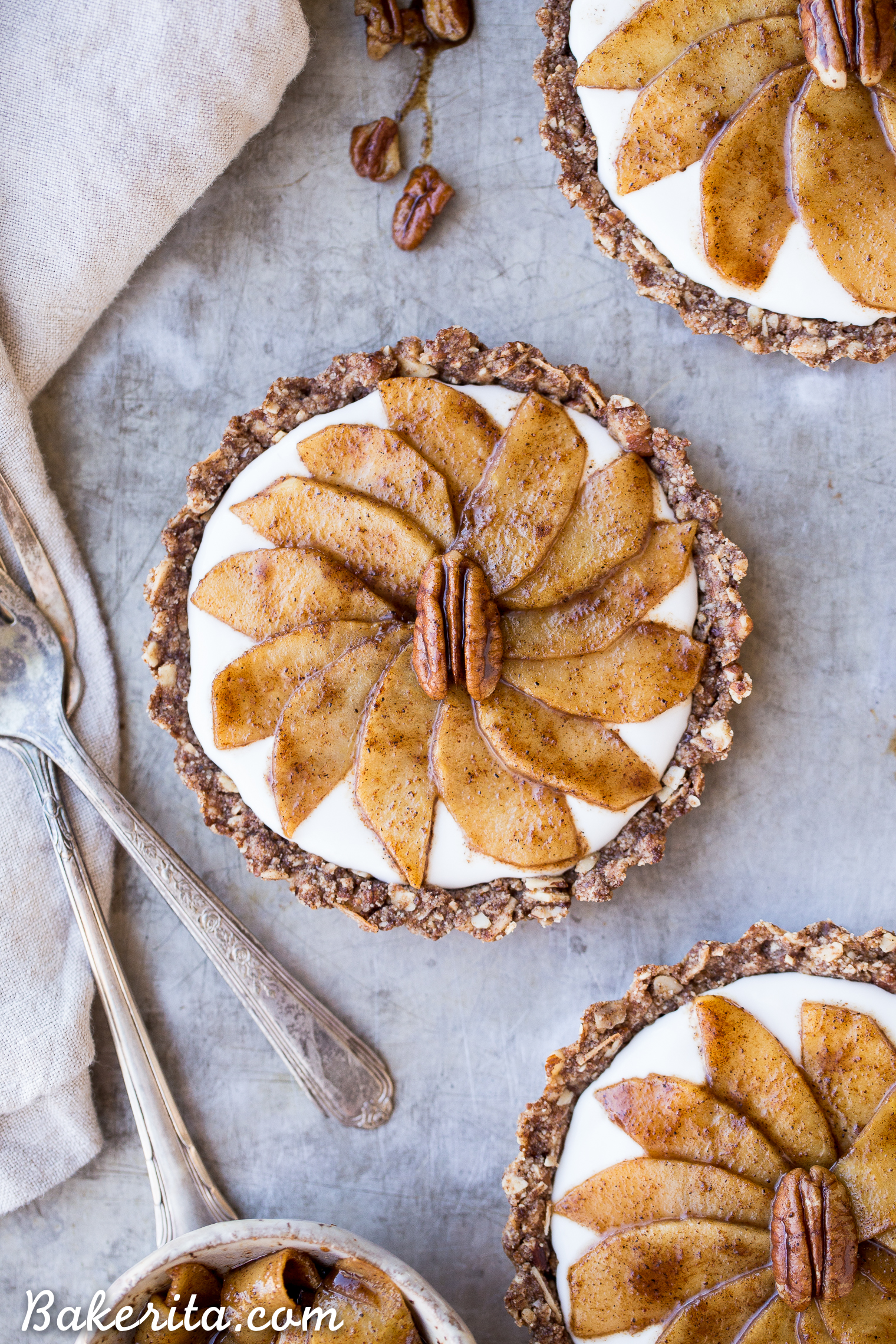 The warm apples are piled on top of the yogurt, and I recommend digging in immediately. The crunchy, nutty and cinnamon-scented crust shatters under your fork, providing a sturdy support for the piles of creamy coconut yogurt and warm spiced + sauteed apples. It’s bliss.

Case in point: I just told my boyfriend what I was writing my post on, and his response was “please please make those again soon.” Hope you love them! :)

These Granola Breakfast Tarts with Sauteed Apples + Coconut Yogurt are an incredible breakfast treat that’s so good, you’ll think it’s dessert! The granola crust is spread with creamy dairy-free coconut yogurt and topped with cinnamon sauteed apples. This gluten-free, paleo and vegan breakfast is the perfect holiday morning breakfast, or to make any morning more special.

For the granola crust

For the filling + apple pie topping

You can either slice the apples, like I did, or used cubed apples. I recommend cubes in the recipe because it’s easier to make and to eat that way (and you get more apple chunks), but if you want them to look like mine, go for the slices!