I’m an early riser. Like, my eyes were open before the clock hit 5 a.m. this morning kind of early. And even though waking up so early ensures I start getting drowsy around 8 or 9 p.m., there’s a certain calm energy in the air during those hours before most of the world has woken up.

Here in wintery Washington, the sun doesn’t rise until well after 7 a.m., leaving me a few hours of time before the sun (or clouds, more likely around here) comes out and cars start buzzing around. I haven’t always woken up quite this early, though I’ve always been a morning person. Since I started working from home, those pre-dawn hours have become my time to organize myself.

I read the news, jot recipes down in my notebook, and plan my day. Those drowsy morning hours spent quietly curled in my bed trying not to wake up my roommate end up being some of the most productive work hours I have all day. It was a few days ago curled up in my bed around 5:30 a.m. that I dreamt up this recipe. By 6 a.m., I had written the recipe, visualized the photoshoot, and I was ready to start testing.

I can get down with coconut macaroons! I’ve wanted to make a coconut macaroon-style crust for a heck of a long time. Now that it’s finally happened, all I can wonder is why did I wait so long? If you’re a fan of macaroons, particularly ones that have been dipped and drizzled with chocolate, these baby tarts just may be your new fave.

The crust is the same recipe you would use for a coconut macaroon. However, I made it refined sugar-free by using honey as the sweetener. You’ll press it into the tart pan and bake until golden brown. The edges will get crunchy and sweet, while the inside stays nice and chewy. After you’ve baked the crust, you’ll add a vegan chocolate ganache made with coconut cream to the tart and garnish with toasted coconut flakes. Voila!

The tart has to cool for about an hour to let the chocolate set. Then, you’re really to dig in! The chocolate ganache filling is so rich and decadent. The dark chocolate pairs so well with the sweetness of the crust. If you’re not into mini-tarts or don’t have mini tart pans, you can also make this as one regular-sized tart. Enjoy! 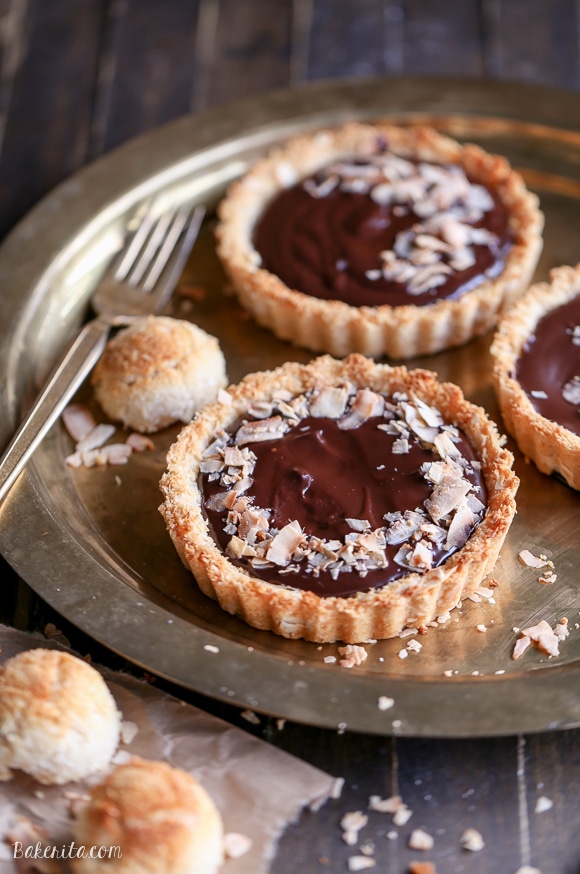 For the coconut crust

For the chocolate filling

I made three tarts, but as you can see, I had enough of the macaroon mixture left over to make some macaroons! You could probably get four tart crusts out of this recipe, but you would likely need to increase the chocolate filling recipe by about 25% (1 1/4 cups coconut cream & 12.5 ounces dark chocolate). Enjoy!