This Blackberry + Blueberry Cobbler is healthy enough for breakfast, but sweet + delicious enough to be dessert! These gluten-free, Paleo, and vegan cobblers have a crisp and gooey topping. 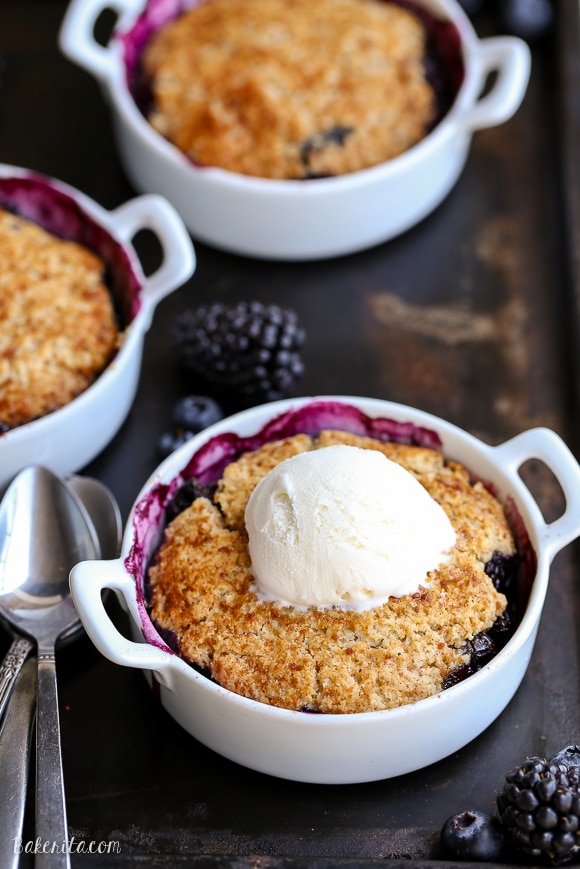 I haven’t dabbled in cobblers too much. In fact, this is somehow the first time I’ve ever posted a cobbler recipe on this site. What I have been doing for the past five years?!

I think for a while I just assumed cobbler was similar enough to a crisp or crumble and never needed too much individual exploring, because crisps had already earned top spot on my favorite dessert list. And logically, that should have earned it a place on my list of things to try long ago. 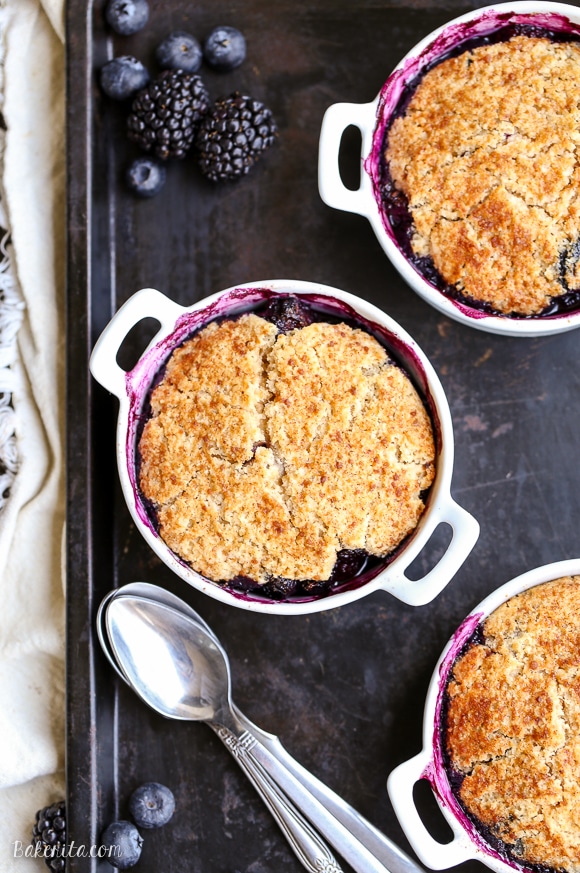 Finally, recently, I started seeing some swoon-worthy, beautiful fruit-filled cobbler recipes floating around the internet. Totally intruiged by the more biscuit-y, cakey top – way more unlike a crisp than I had realized – I set out to create my own perfect (and healthier) cobbler topping.

Playing around with a mix of almond flour, tapioca flour, and baking powder for a bit of fluffiness, I created a pretty bomb (if I do say so myself) cobbler topping. Even better? By using non-dairy milk and coconut oil, it’s kept totally gluten-free, grain-free, Paleo-friendly, and vegan. 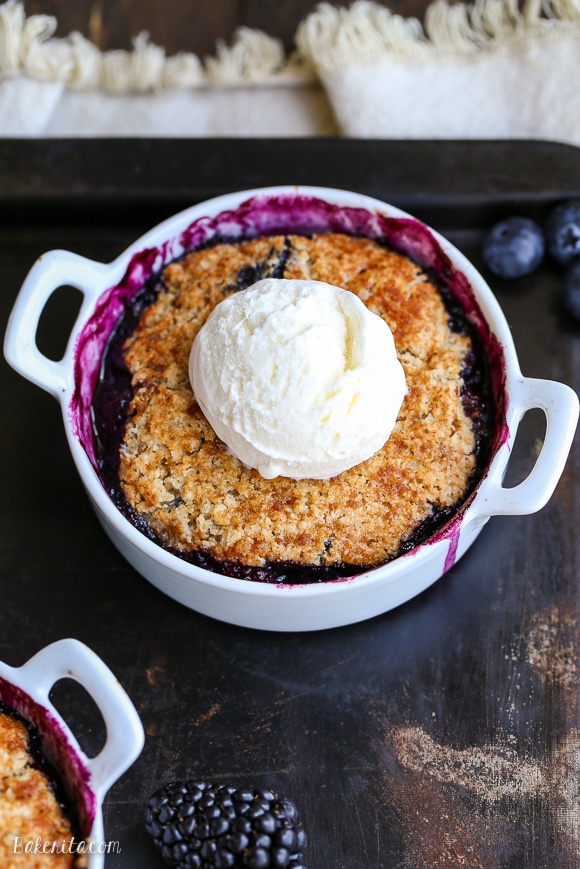 A bit of coconut sugar and a splash of vanilla extract are used for flavor. These ingredients create a thick batter, which tops off the filling: a combination of fresh blueberries and fresh blackberries. The berries are tossed with maple syrup, tapioca flour, and cinnamon. The simple approach to the filling creates a lightly sweetened berry filling with a thick sauce and fresh flavor.

The entire cobbler recipe can baked in a small baking dish, but I recommend splitting it up into three or four small ramekins and baking the cobblers individually. By dividing up the filling and batter, everyone can devour their own cobbler and enjoy the perfect filling to cobbler topping ratio. 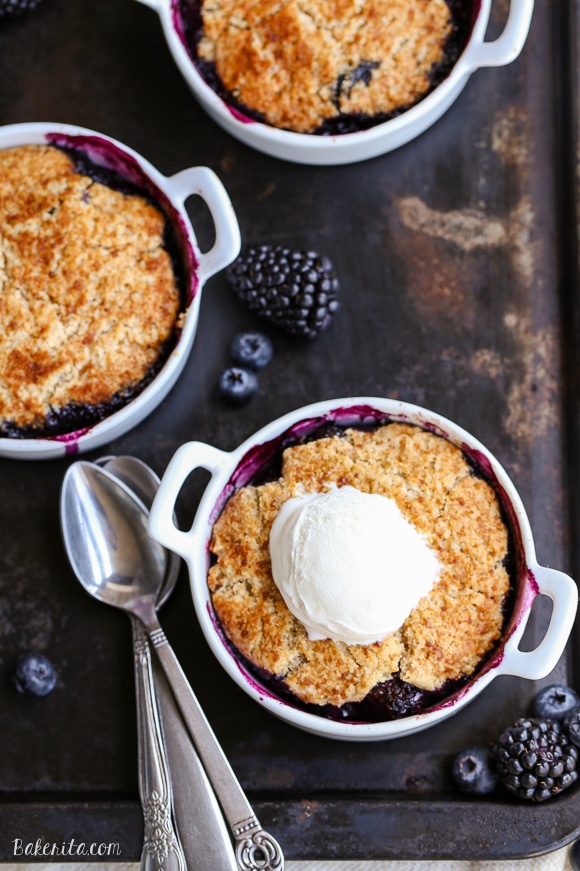 The blueberries and blackberries work together super well. The blueberries are high in pectin and break down a lot, providing thickness and sweetness, while the blackberries add a burst of tartness. The batter on top puffs up in the oven, becoming a fluffy, biscuit-y top with a crunchy crust made from a sprinkle of coconut sugar and cinnamon right on top.

I recommend devouring one of these warm – add a scoop of dairy-free ice cream or a dollop of coconut cream on top for the ultimate treat! Enjoy :) 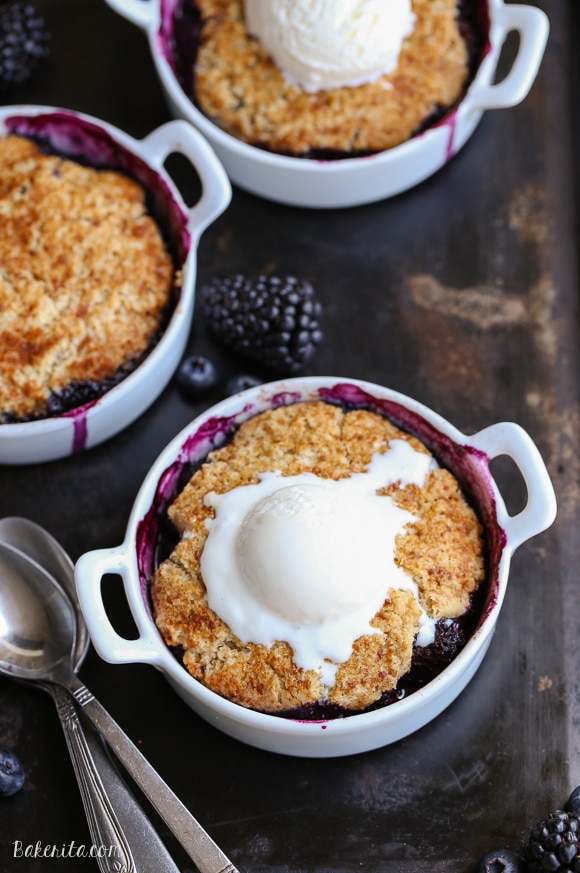 For the cobbler topping