In these Apricot Frangipane Bars, apricots and almonds come together in the most delightful way – the shortbread crust is topped with an almond frangipane filling and topped with fresh, juicy apricots. These gluten-free, paleo, and vegan bars are irresistibly delicious. You can customize them with your favorite stone fruit, too! 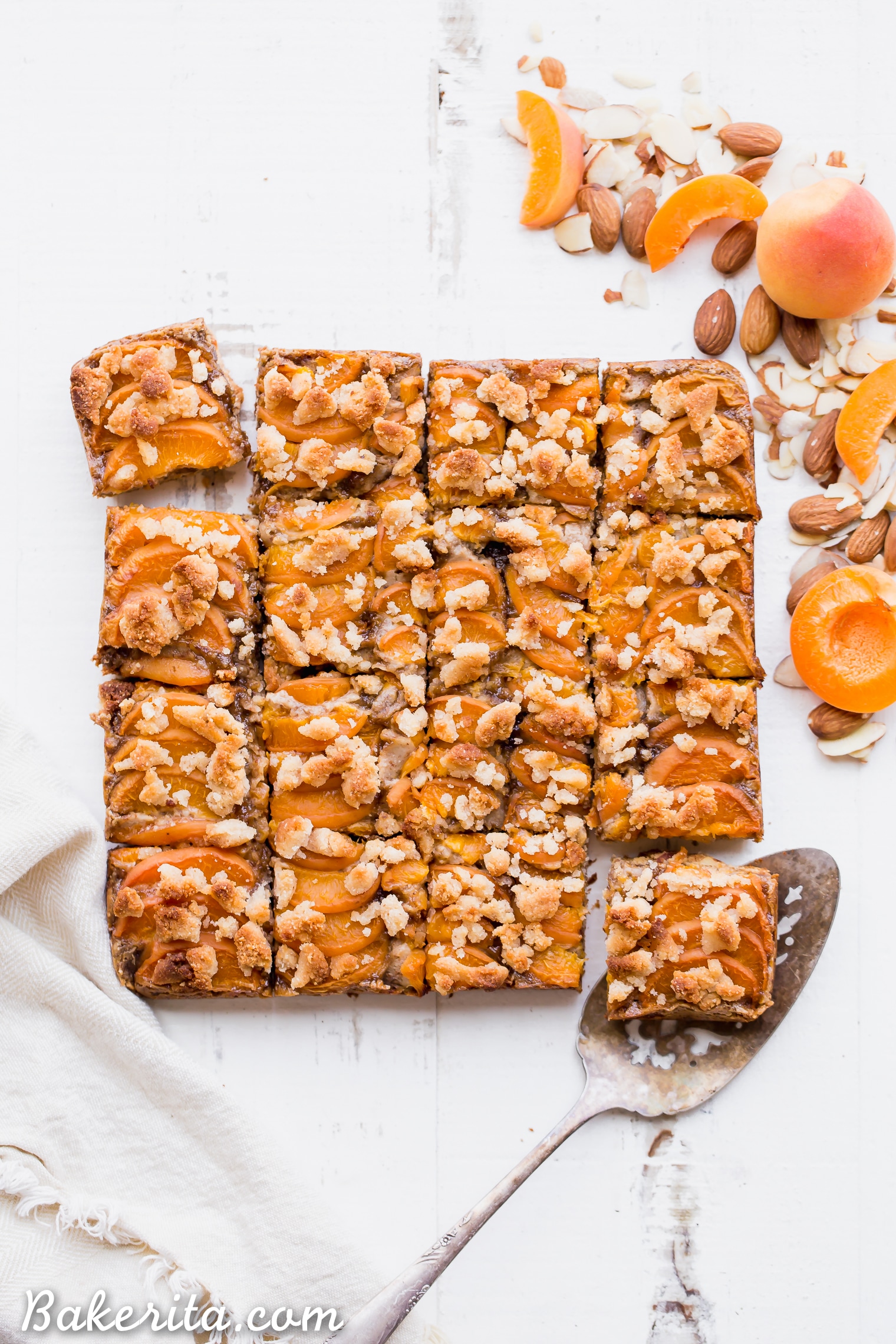 I’ve underloved apricots for most of my life. I don’t think it was my dislike of them, more a lack of exposure – we just never bought them, so they were never in the house. We always favored peaches, nectarines, and plums as our stone fruits of choice.

To be honest, apricots were never the star of the show when it came to comparing all of those fruits. They always seemed the blandest. BUT last year – I tried apricots from the local farmer’s market and fell in love. They were so much juicier and sweeter than I remembered! 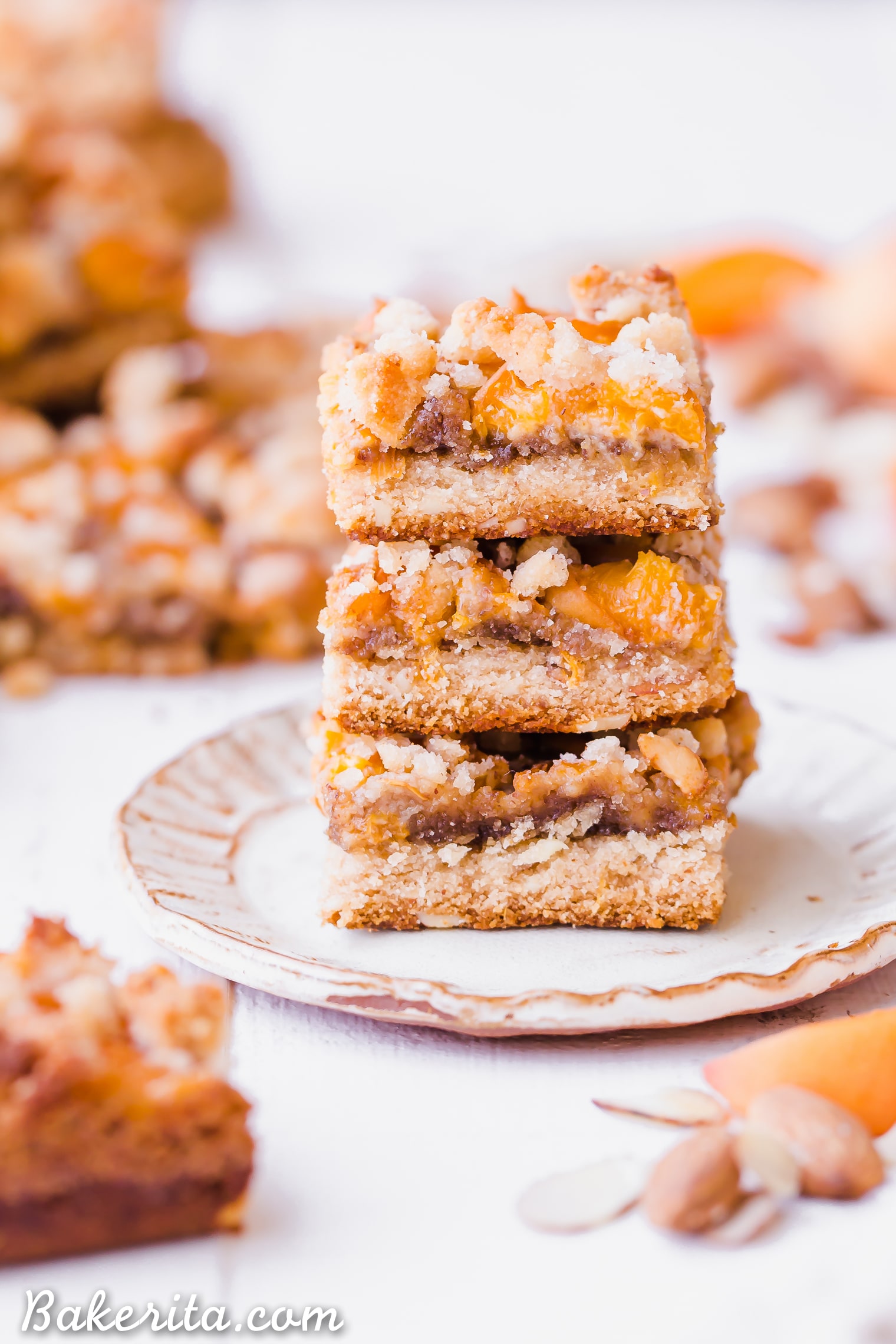 At the time, my boyfriend at the time and I had borrowed his mom’s dehydrator and were dehydrating tons of farmers market fruits to see what was the most delicious. One day we threw a couple apricots halves on there and OMG. We both became obsessed.

For most of the following months, we were dehydrating SO. MANY. APRICOTS. and then promptly devouring them. They still never made it into a recipe though… 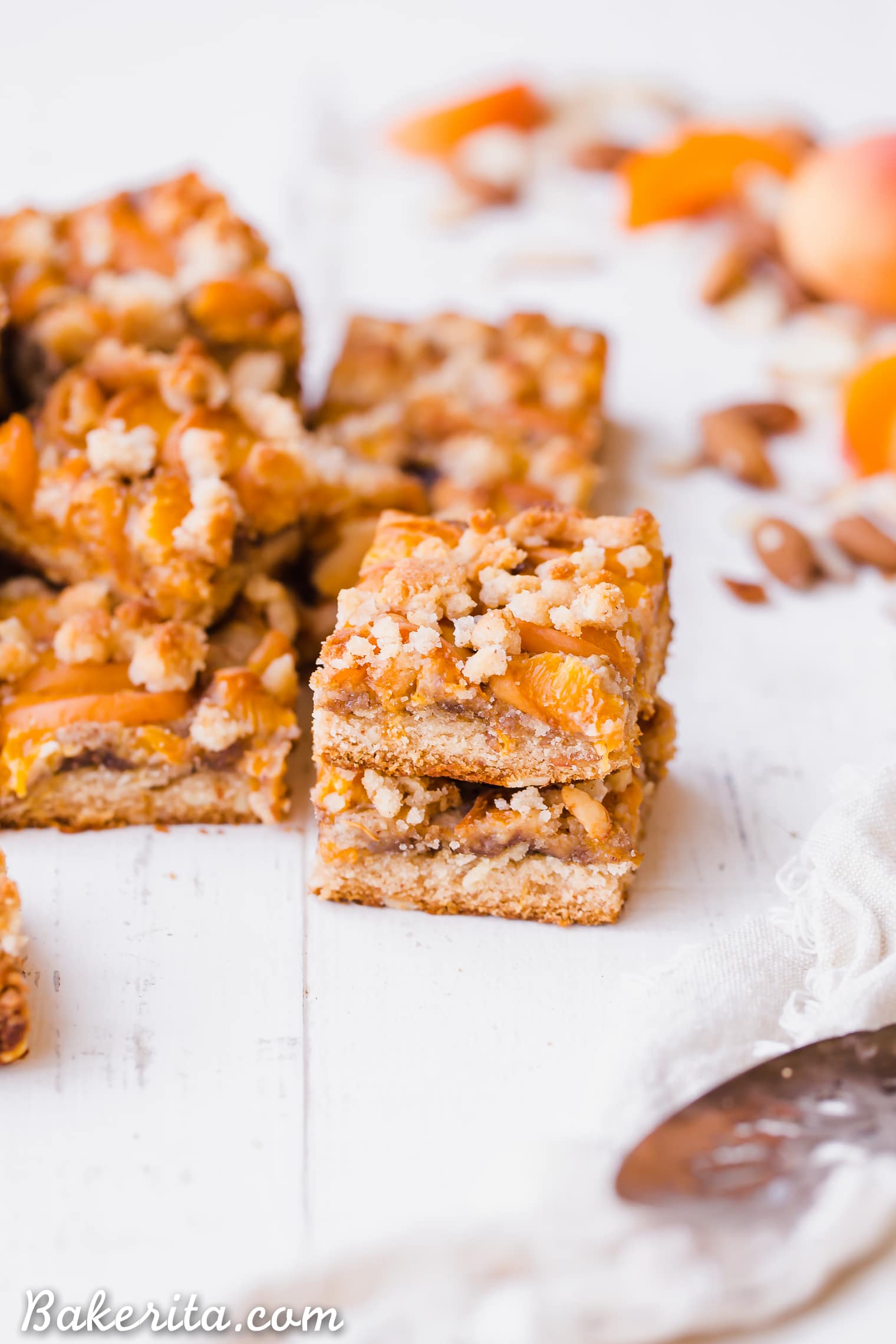 So recently, when I was asking on Instagram about what kind of fruits you guys wanted to see in desserts this summer, someone messaged me and suggested an apricot crumb bar. These Apricot Frangipane Bars immediately constructed themselves in my mind – I had to make them soon.

So I gathered some fresh, delicious apricots from the farmers market and brought them to life. They were just as good as I envisioned. 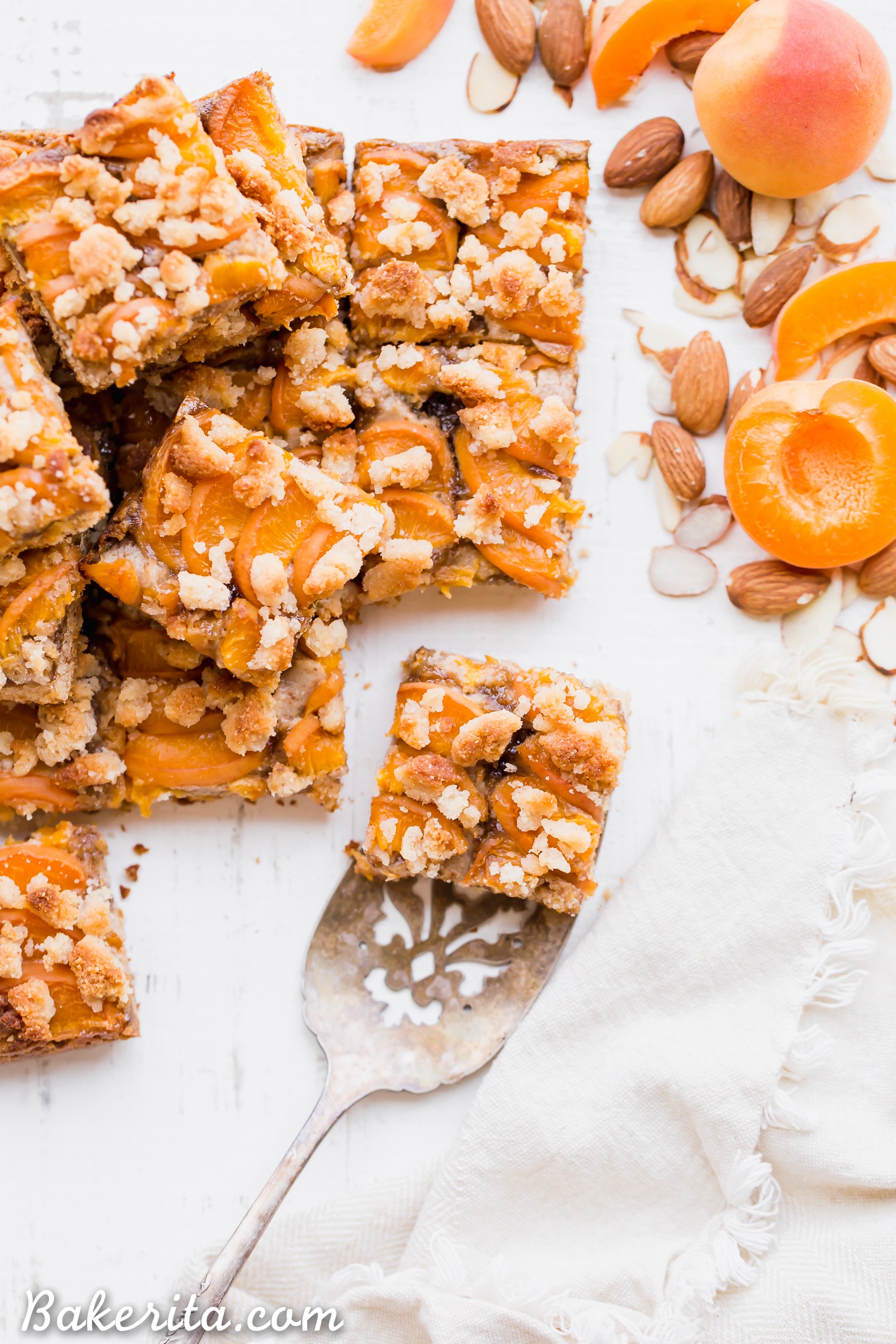 These Apricot Frangipane Bars have a thick, shortbread-like almond crust with a layer of almond frangipane on top, apricots arranged all over the top of the frangipane, and then some extra crust crumbled over everything. The apricot and almond flavors pair together so wonderfully, and it’s a delightful combination of textures.

Since the crust and crumble are the same, it doesn’t take long to make either! The longest part for me was arranging the apricots…and since the slices are covered in crumble anyways, you certainly don’t need to be fancy about it like I tried to be (before I remembered you’d barely be able to see it…). 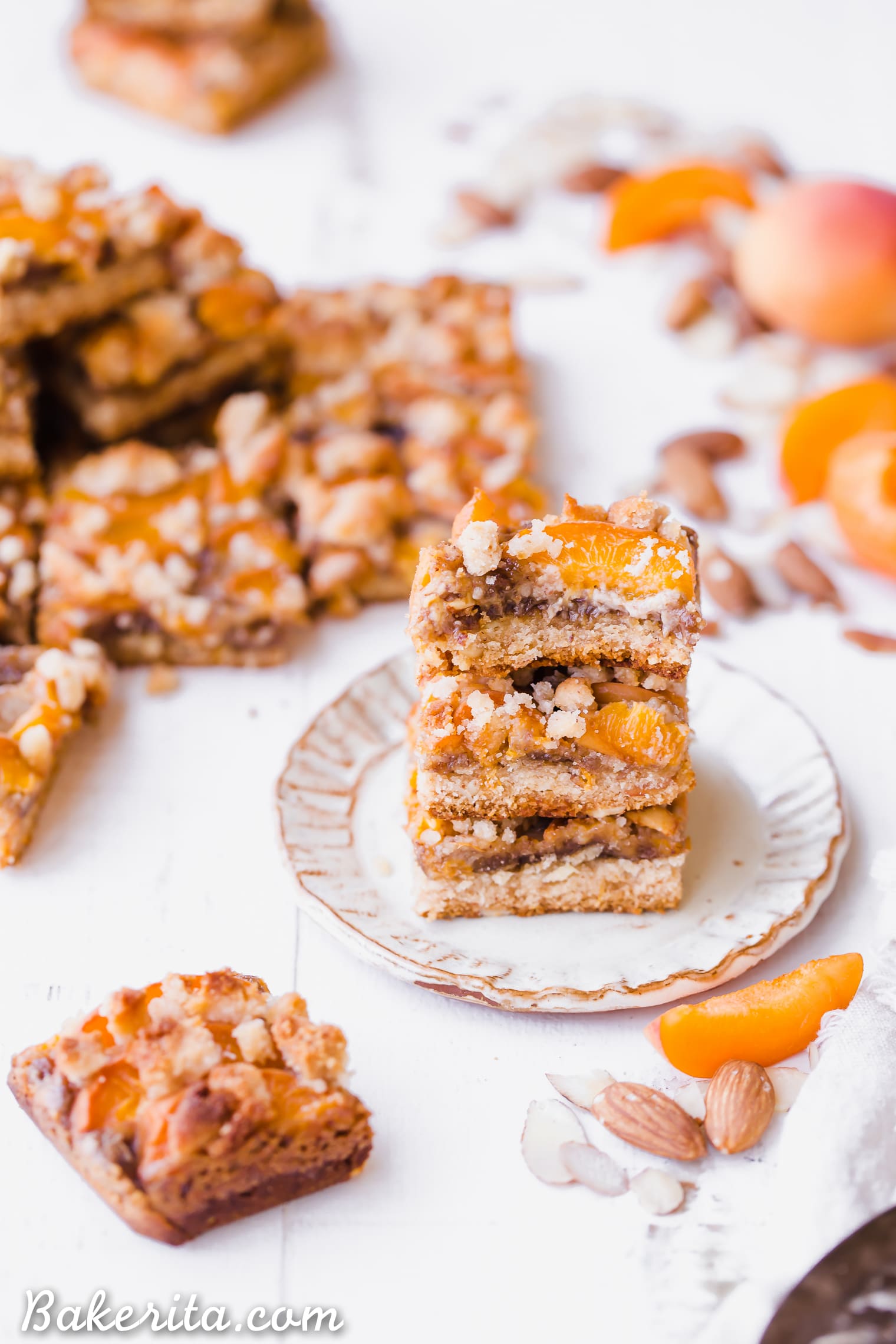 Of course, if apricots aren’t your jam, or you just have some other stone fruits around the house you want to use instead, go for it! You can vary the fruit pretty easily here to make it your own :) have fun with it, and enjoy!!!

In these Apricot Frangipane Bars, apricots and almonds come together in the most delightful way – the shortbread crust is topped with an almond frangipane filling and topped with fresh, juicy apricots. These gluten-free, paleo, and vegan bars are irresistibly delicious. You can customize them with your favorite stone fruit, too!