This Vegan Chili doesn’t lack any heartiness just because it doesn’t have any meat. It’s loaded up with veggies, beans, and tons of spices — this is the BEST vegan chili recipe I’ve had! 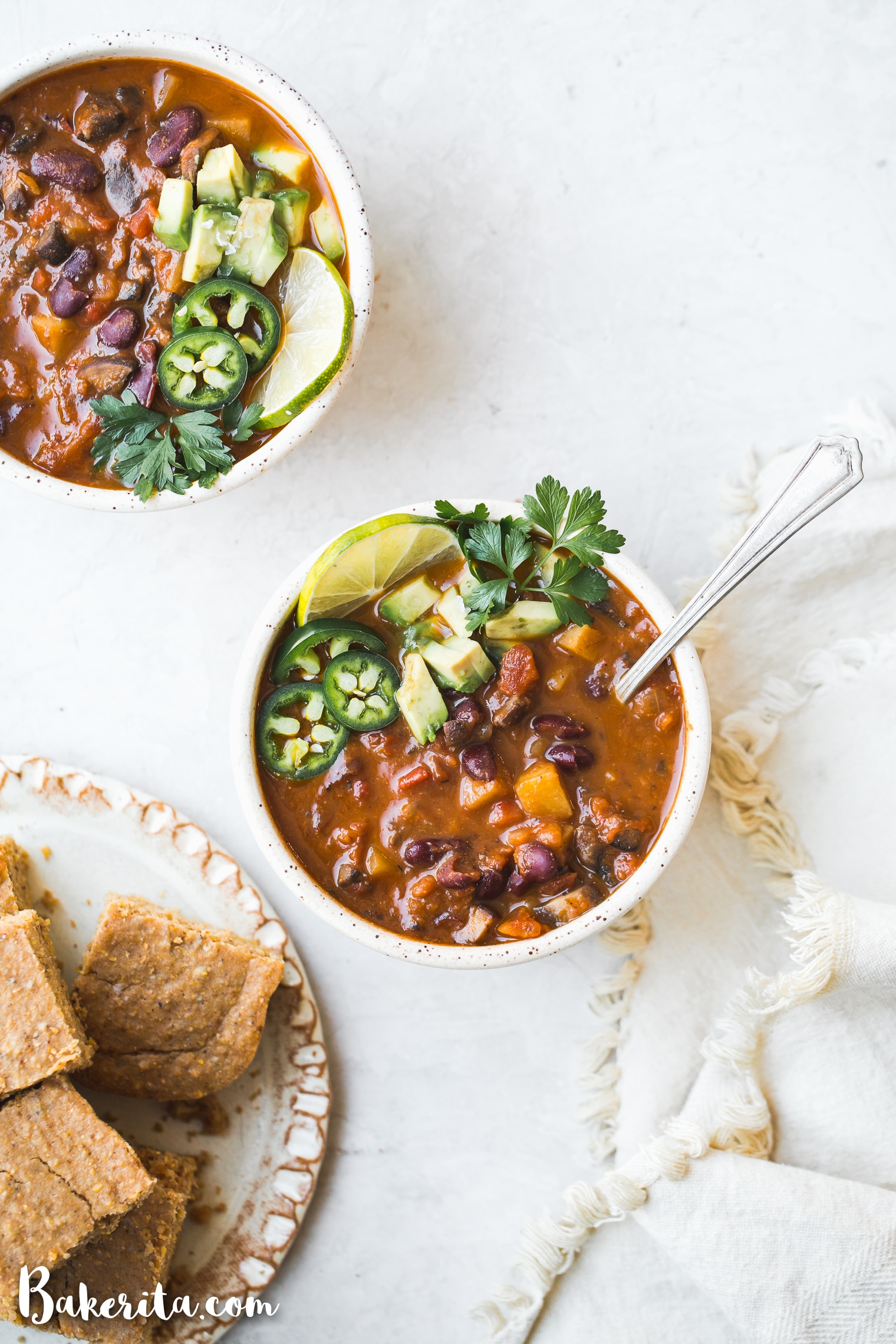 For years, this Best Chili recipe has been one of the most popular recipes on this website. It always gets rave reviews, has won countless chili cook-offs, and has converted many chili haters. I even made a paleo, keto-friendly chili recipe as a spin-off to the OG that has proved equally as popular. They are both rich, hearty, delicious, and…full of meat.

Which is great, for everyone who eats meat. When I posted those recipes, I followed a more traditional omnivore-style diet. These days though? I tend towards eating a more plant-based diet. I’m not strictly vegan (I’ll have the very occasional eggs in baked goods or a little ghee & honey) but I haven’t eaten red meat or chicken in over 2 years. So, my famous chili recipes were off the books for me. 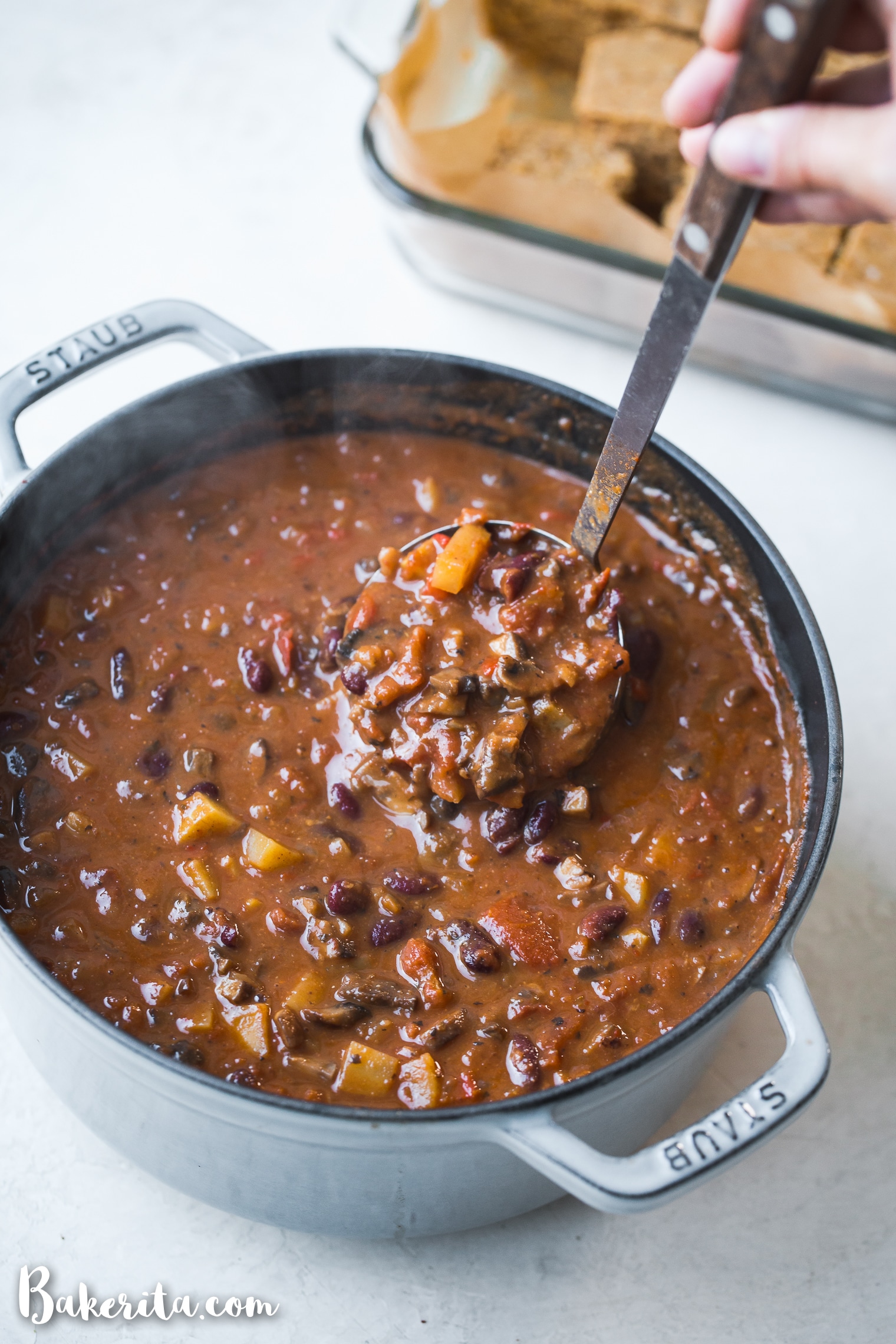 I do have this recipe for White Bean Vegan Chili and that recipe is so delicious, but lately, I’ve been craving a big bowl of hearty red chili served with a side of homemade gluten-free vegan cornbread. With a little tweaking, I knew I could adapt my best chili into the best vegan chili recipe!

How is this Vegan Chili recipe so hearty?! 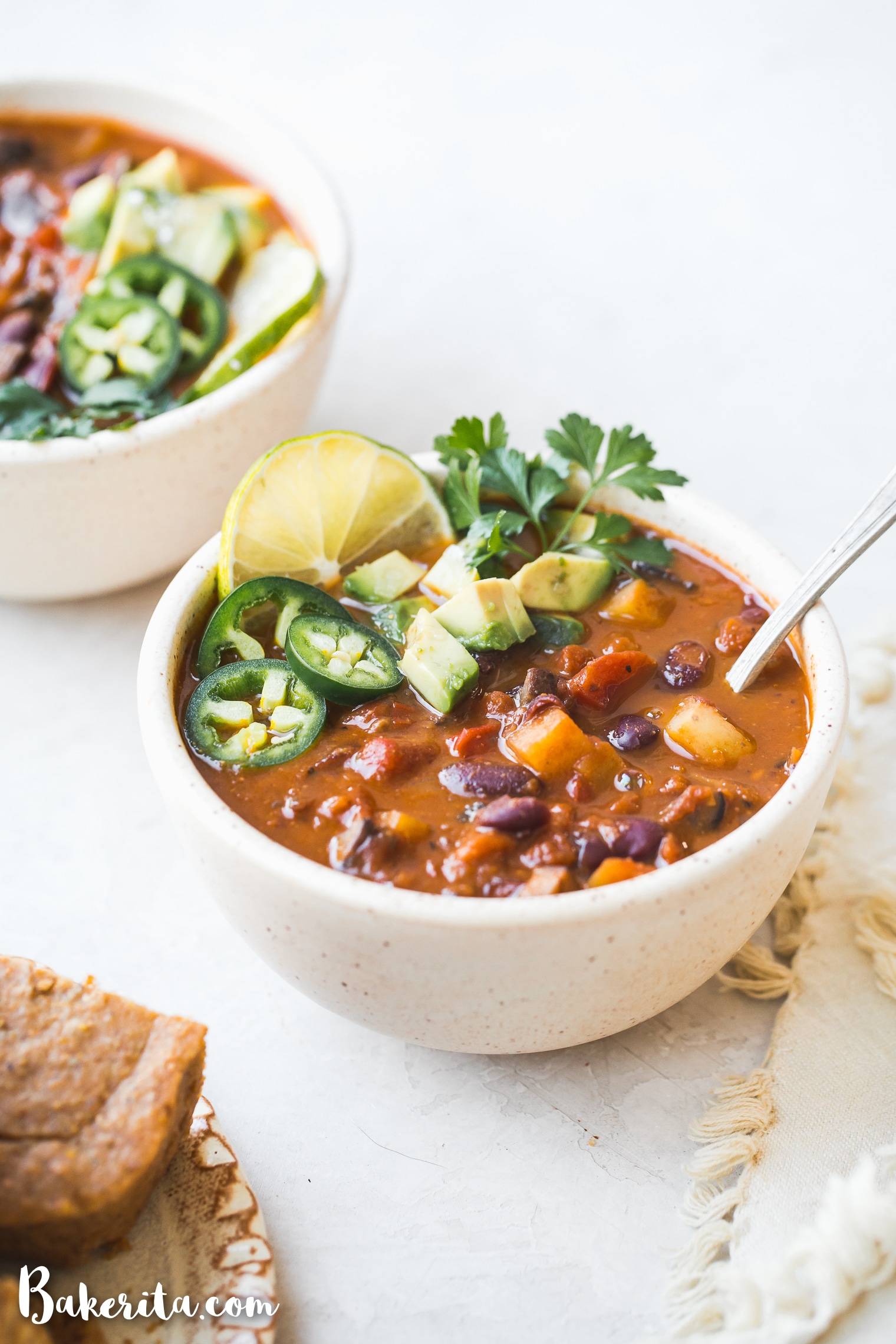 Trust me – there’s so much flavor packed in here that you won’t miss the meat.

This Best Vegan Chili recipe is simple to make. The ingredients list may look long, but half of it is spices and I’m thinking you’ll have most of them on hand already. The rest of the ingredients are also staples – nothing exotic to see here.

The only ingredient you might be unfamiliar with is the nutritional yeast. It’s one of my favorite ingredients to use because it adds a super savory, umami flavor to foods, which makes it perfect for amping up vegan dishes. In this vegan chili recipe, the nutritional yeast adds a certain ~something something~ that makes the chili taste extra savory. You can find it near the spices at more grocery stores, or order it here. 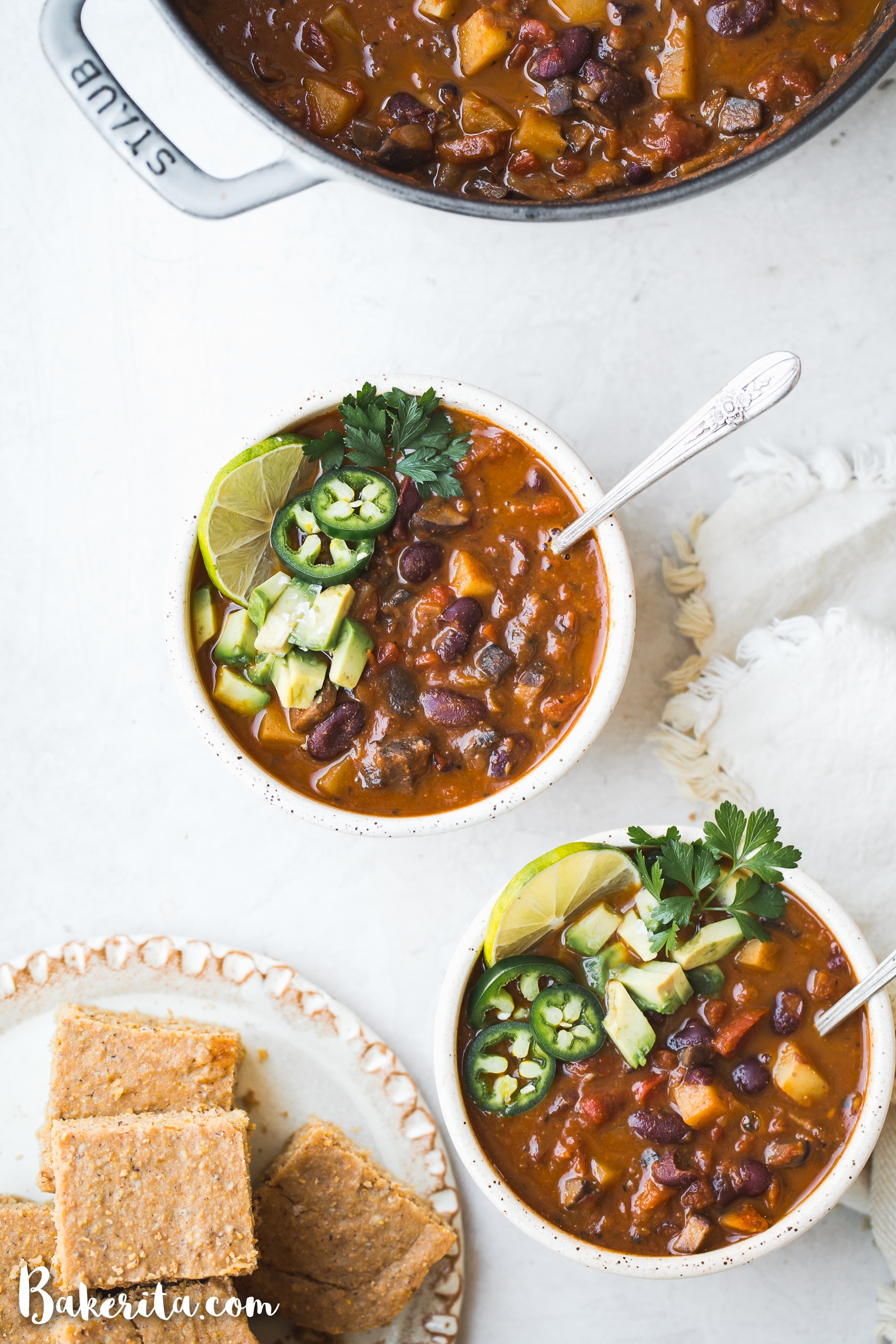 Can I prep this Vegan Chili ahead of time?

Absolutely! This Vegan Chili will stay good in the refrigerator for up to 5 days if stored in an airtight container.

You can also freeze this chili. You can cool it and pour it into a zip bag to freeze all at once. I recommend laying it on a sheet pan to freeze, and then when it’s solid and flat, you can stack it into your freezer. You can also store smaller portions in jars, but make sure the chili is completely cool before you do this. 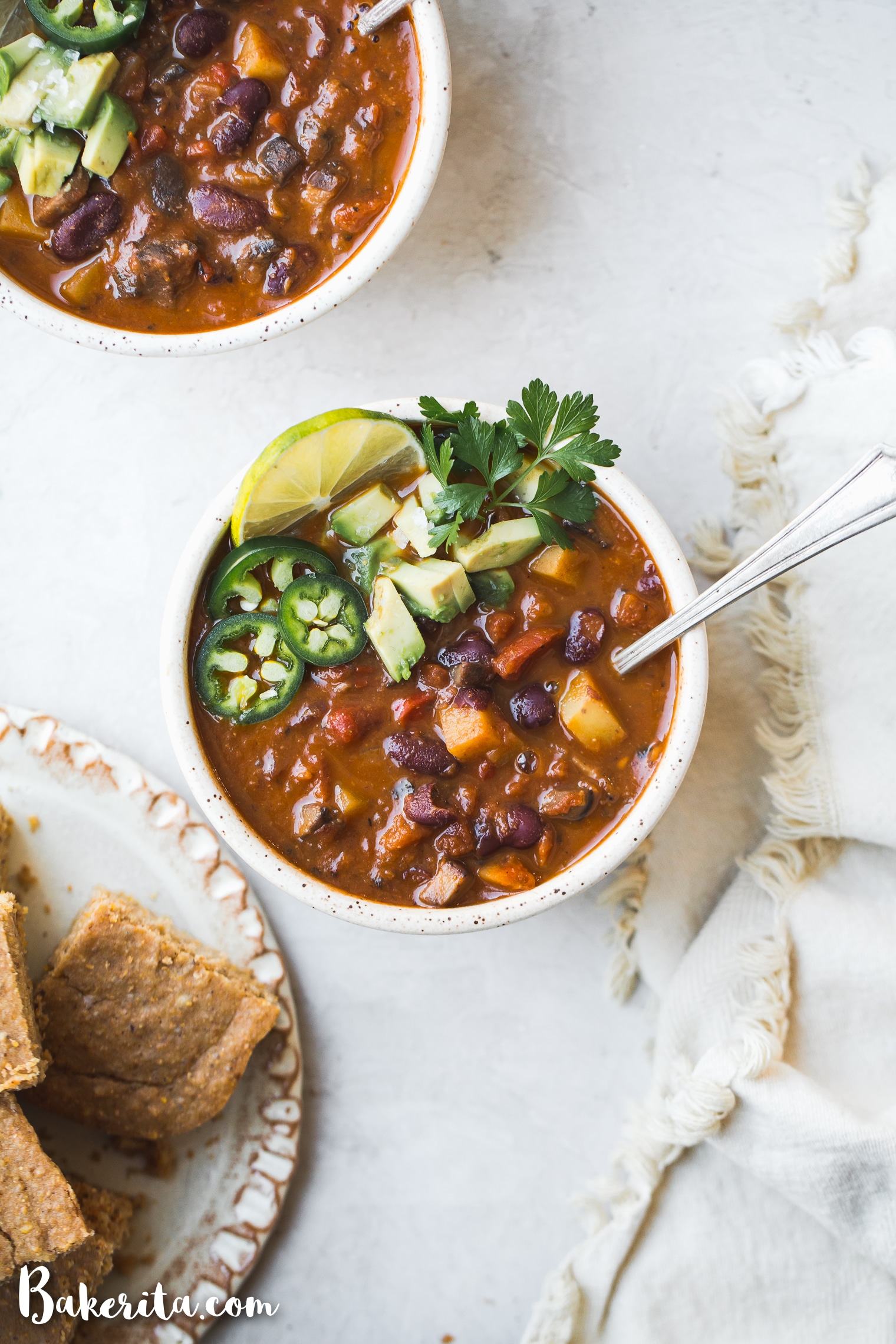 I hope you love this vegan chili recipe as much as I do! It’s perfect for warming you up on chili days. Be sure to serve it with cornbread for the most delicious winter meal!

This Vegan Chili doesn’t lack any heartiness just because it doesn’t have any meat. It’s loaded up with veggies, beans, and tons of spices — this is the BEST vegan chili recipe I’ve had!

Cool the chili completely and then pour it into a zip bag to freeze. I recommend laying it on a sheet pan to freeze, and then when it’s solid and flat, you can stack it into your freezer.

You can also freeze smaller portions in jars, but make sure the chili is completely cool before you do this. Chili will stay good for 6 months in the freezer. 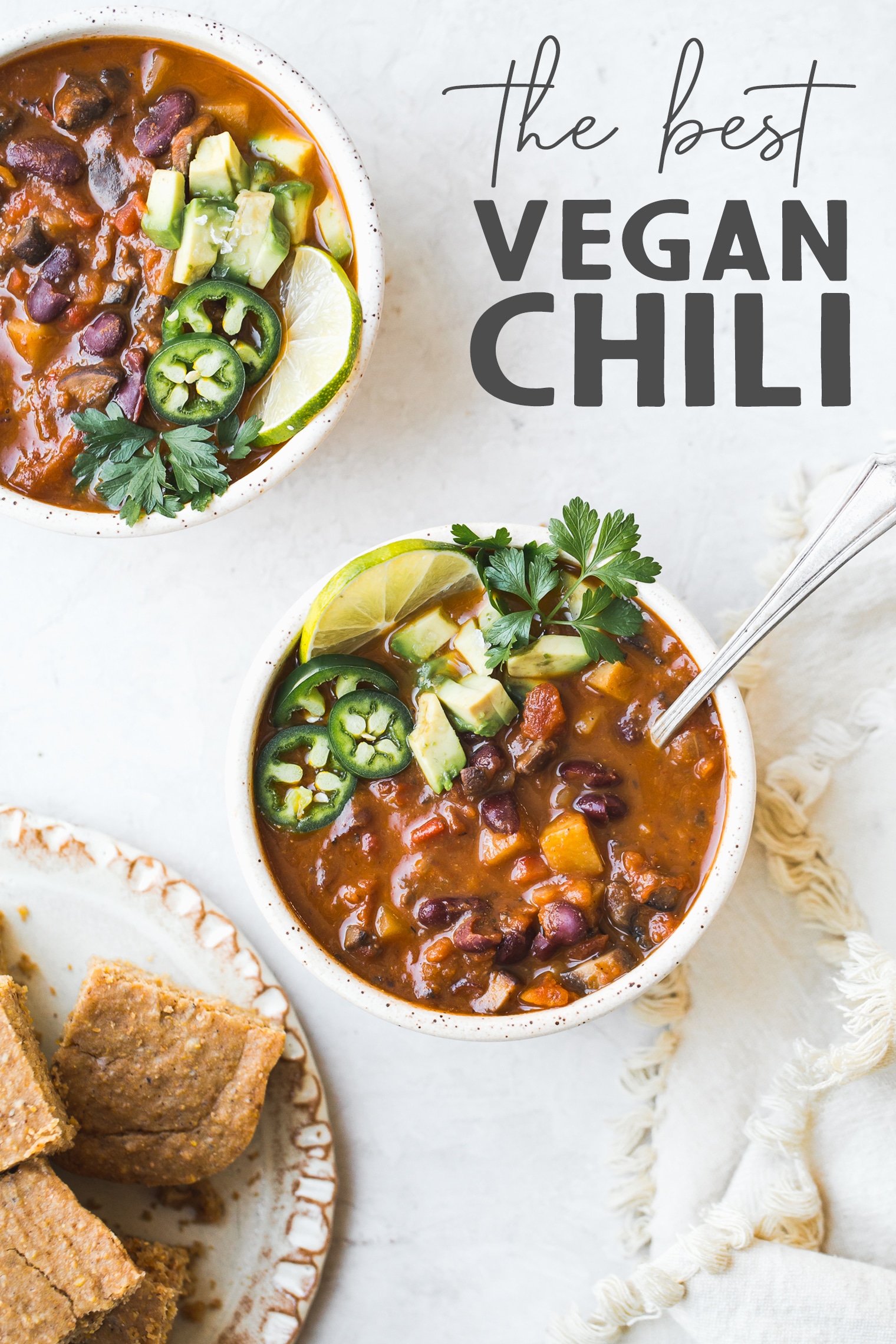 in the midst of unpacking and could realllllyyyy g

HONEYNUT SQUASH SOUP! 🥣 have you ever had a hon

one of my favorite veggie dishes of all time: char