This Raspberry Coconut Crumble Tart has an almond coconut crust that doubles as a crumble topping, filled with fresh raspberries! This easy recipe is Paleo-friendly, gluten free, refined sugar free, and vegan. 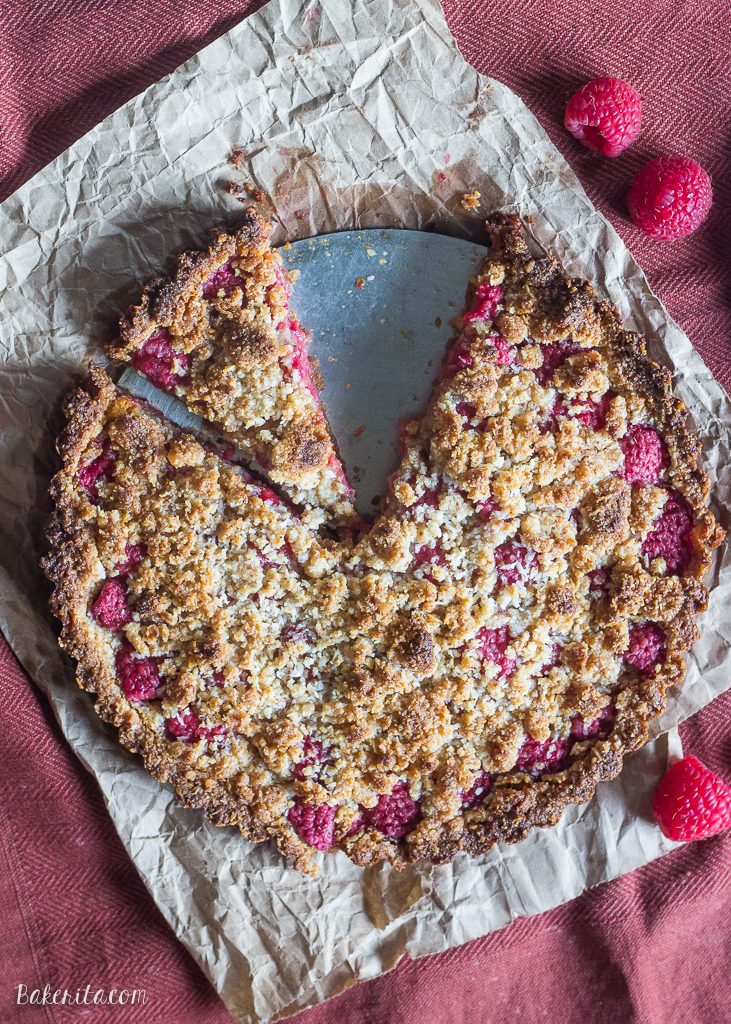 this recipe
It’s been a little while since I posted something healthier, because I’ve been too busy shoving lots of cookies and cakes in your face (and my face). No regrets, you (we) deserved some chocolate.

However, it’s time for a little detox. Not a real detox though, because real detoxes are hard and not delicious. This detox involves a raspberry coconut crumble tart, which is anything but hard, and it’s most definitely delicious. 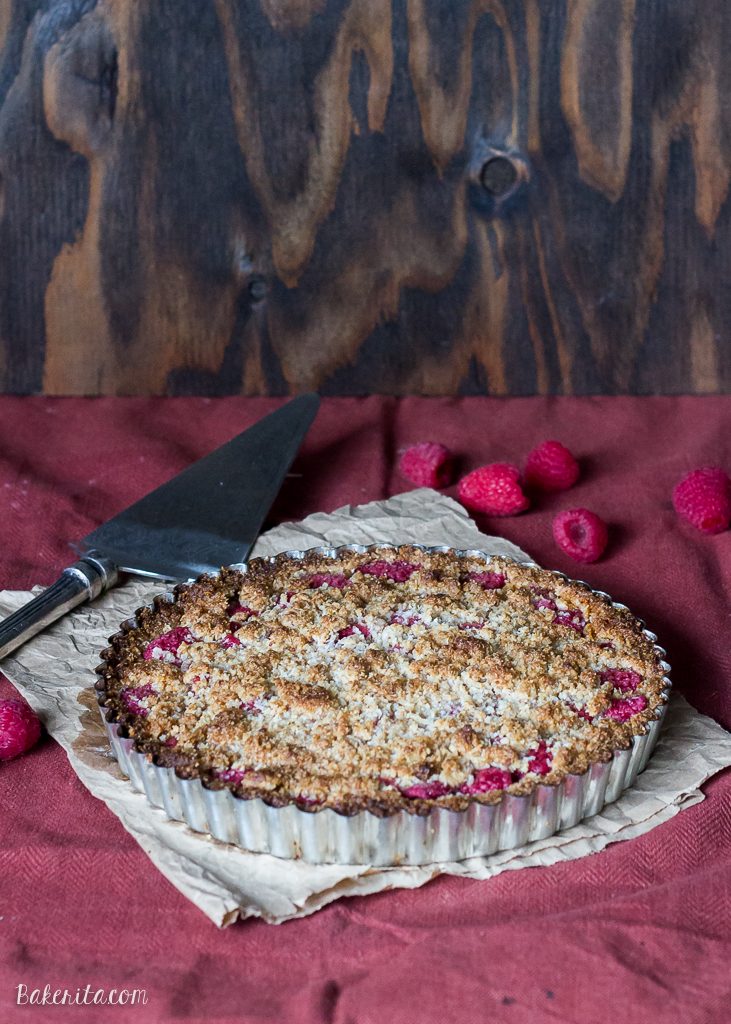 After sooo much chocolate, I was craving something light and fruity. Because I adore raspberries, hadn’t baked with them in a while, and they were on sale at the grocery store, they became the star of the show.

Normally I wouldn’t think to pair coconut and raspberries, but Natalie over at Tastes Lovely made an incredible looking Healthy Chocolate Tart that used my crust recipe from this Dark Chocolate, Coconut & Macadamia Nut Tart and it reminded me of how much I love that crust! It’s made of almond flour, shredded coconut, coconut oil, and a teensy bit of sweetener. It bakes up golden brown and a little crispy, but softens after a few hours of cooling. It’s super delicious, and you won’t care at all that it’s healthy. 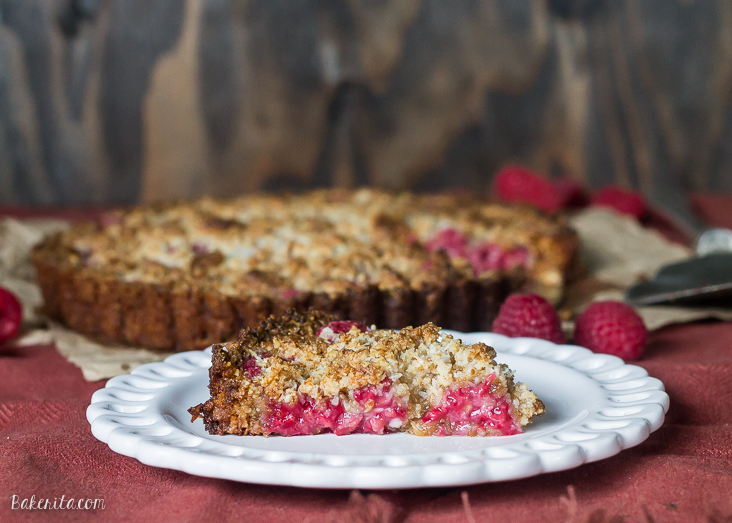 After making the crust, I piled on some lightly sweetened raspberries on top and added a little bit of crumble. The crumble is repurposed from the crust – I’m not trying to do more work than I need to.

Pop it in the oven for 45 minutes, but after 20 tent it with foil to prevent the crust from getting too brown. Trust me. I forgot and uh, almost burnt this one. Learn from my mistakes. Burnt coconut = no good. 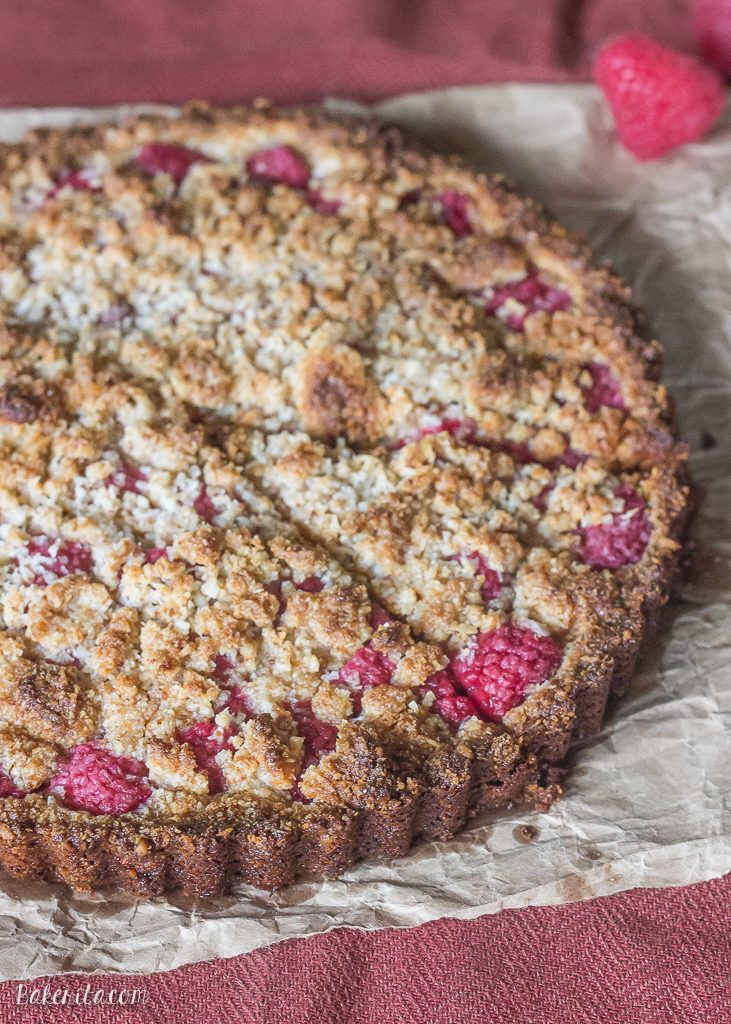 After the tart cools completely, devour. Seriously. There’s no gluten, dairy, refined sugar, grains, eggs, or guilt in this tart. It’s totally safe for all you Paleo folks too.

My housemates were dubious about this one, but they all told me that even though they weren’t sure they would like it, it was surprisingly delicious and they ate it happily. Even the one who doesn’t like coconut! Win. 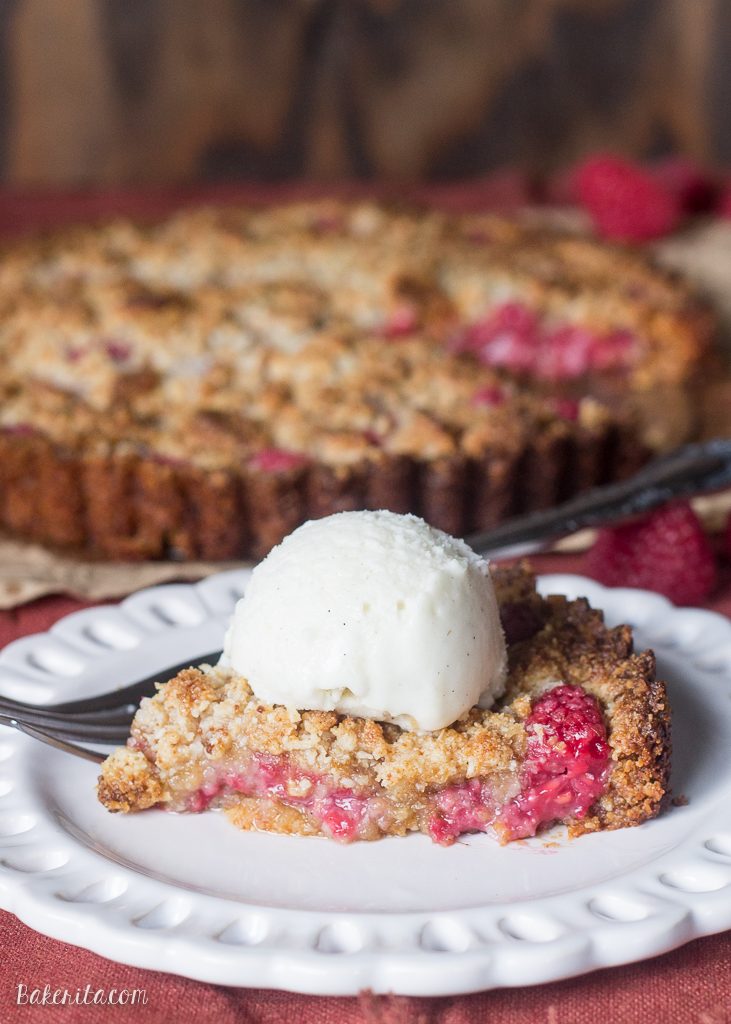 And then, if you want, make this raspberry coconut crumble tart a little less healthy and add ice cream. To keep it Paleo, make banana ice cream! Enjoy :)