These Peanut Butter Banana Donuts have a dark chocolate glaze topped with a drizzle of peanut butter! They’re baked instead of fried, and they are gluten-free, refined sugar-free, and vegan, making them way healthier than your average donut. 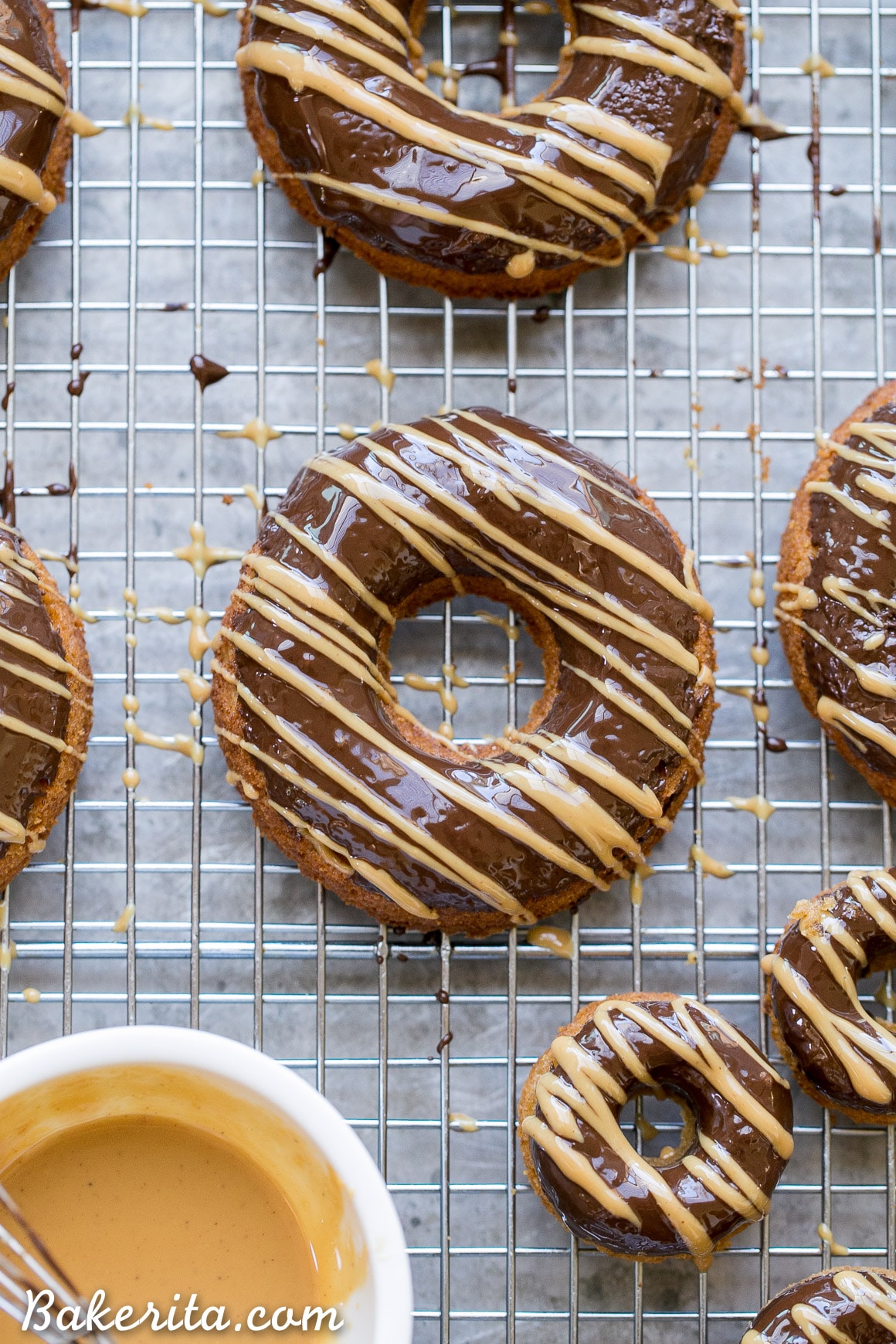 this recipe
It’s donut time!!! But first: I have a little confession to make. Not to rain on the donut parade or anything….but donuts aren’t really my favorite thing.

They definitely used to be though. When I was a kid, I was a firm believer in junk food. My parents divorced when I was four, and let’s just say my dad didn’t exactly feed my sister and I the healthiest of foods, opting to buy us pretty much whatever we wanted from the grocery store. It usually ended with a lot of candy (like, two of those big Red Vines containers at a time) and Smart Ones frozen dinners. 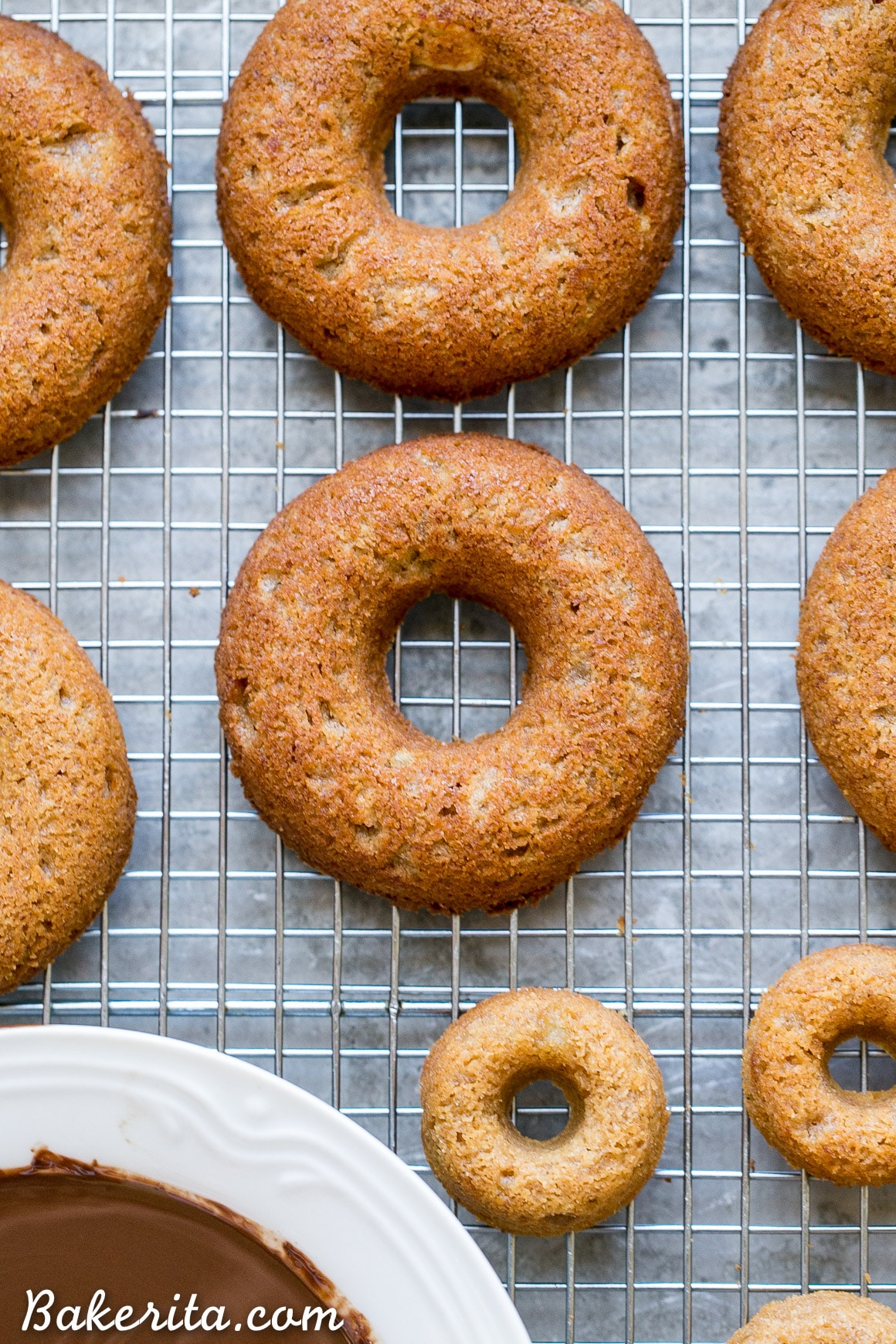 One day, on a mission to get me to eat anything healthy, my dad inquired about my favorite nut, presumably hoping to get a little protein in me. My serious six year old response after a moment of deep thought? “Donuts!!!”

But of course. The only nut of choice for a sugar-loving 6 year old. I had a particular favorite though, from the donut shop down the street. It was HUUUGE, like definitely bigger than my child-sized head…in fact, it’s probably bigger than my current-sized head. I would usually opt for the chocolate glazed, and end up with more of it on my face than in my mouth. Oh, childhood. 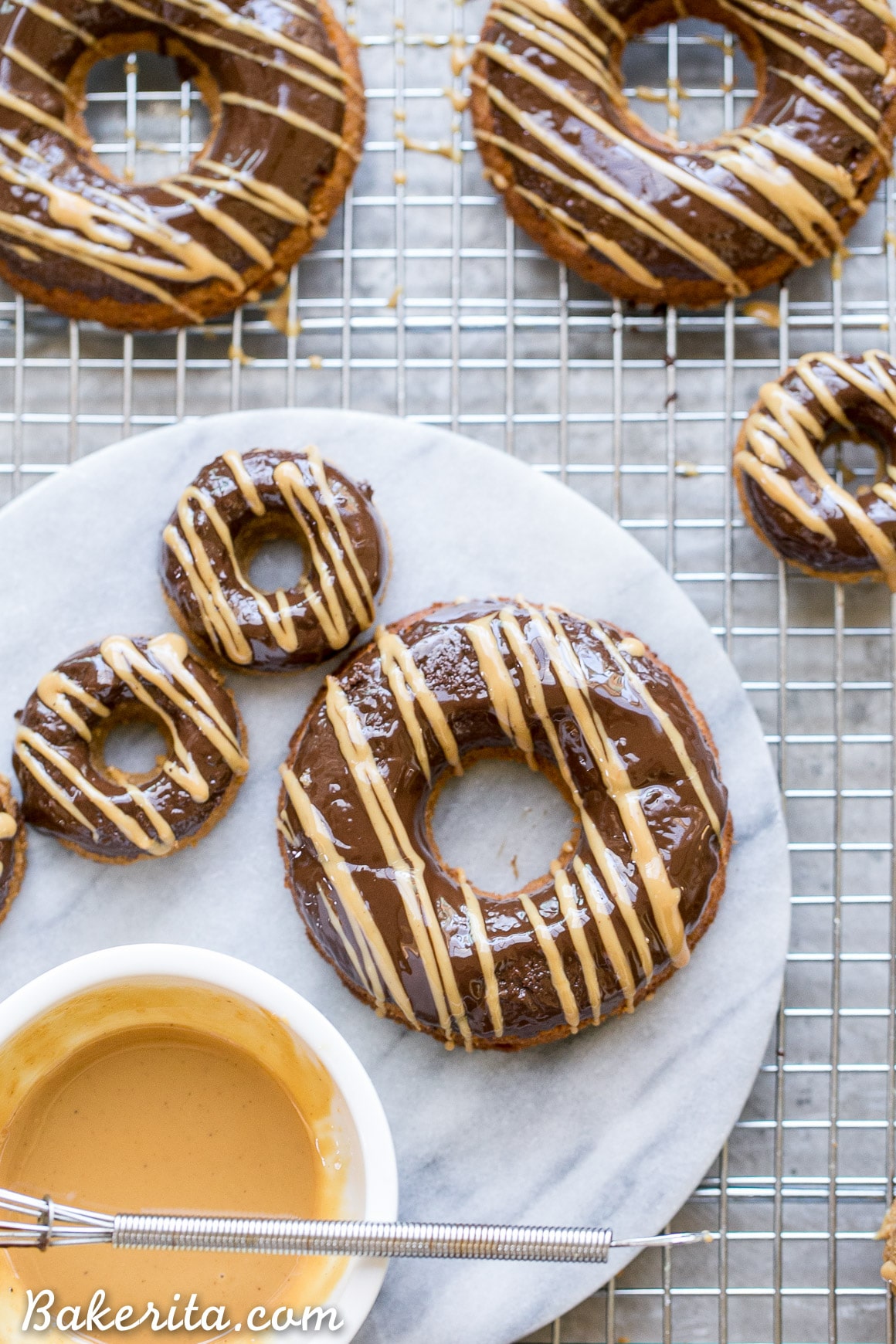 Maybe it was binging on those huge donuts for so many years, but somewhere along the way, I stopped being a big fan. Most days, I’ll pick a croissant or muffin over a donut, craving something a little less sweet and less deep-fried for my breakfast pastry.

Baked donuts, though? They’re starting to change my tune. I have a few donut recipes on the site – like these majorly swoon-worthy Pumpkin Baked Donuts that are FILLED WITH DULCE DE LECHE and the cutest little baked chocolate donuts you ever did see. So, when I spotted my donut pan and mini donut pan hiding in my pile of pans, I decided it was time to rekindle my love of donuts – but a little healthier this time. 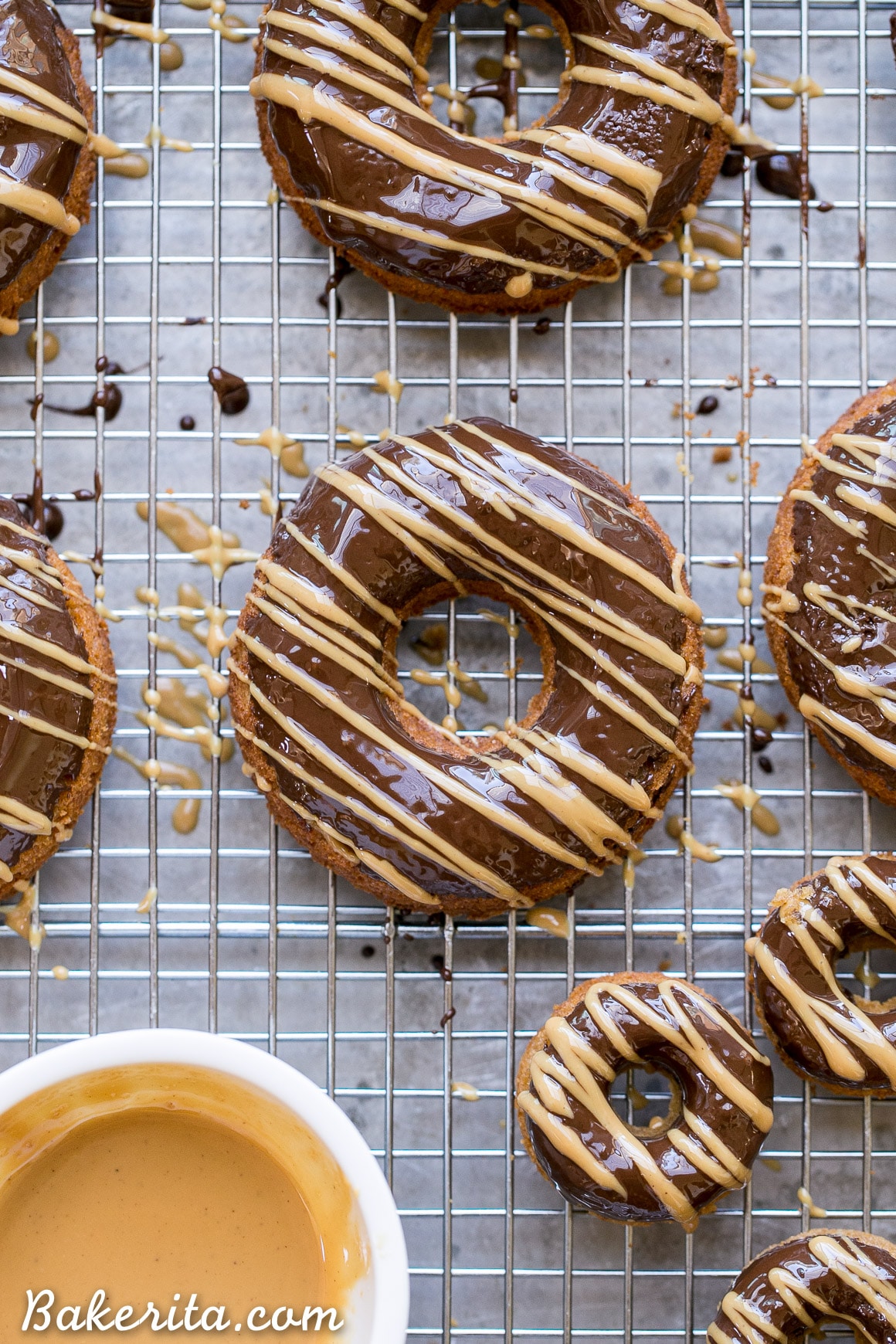 Bananas and peanut butter are one of my favorite combos in the food world (mostly because peanut butter has my heart), and so it seemed only natural to make peanut butter banana donuts! Bonus: they’re also gluten-free and vegan and have NO refined sugars.

The banana does a wonderful job of replacing the moisture and binding power an egg would typically bring to a recipe, similarly to how it does in my favorite vegan blueberry muffins. It also adds some sweetness, so you only need a couple tablespoons of maple syrup to make these sweet enough. Honey can also be used, if you’re not worried about keeping these vegan. 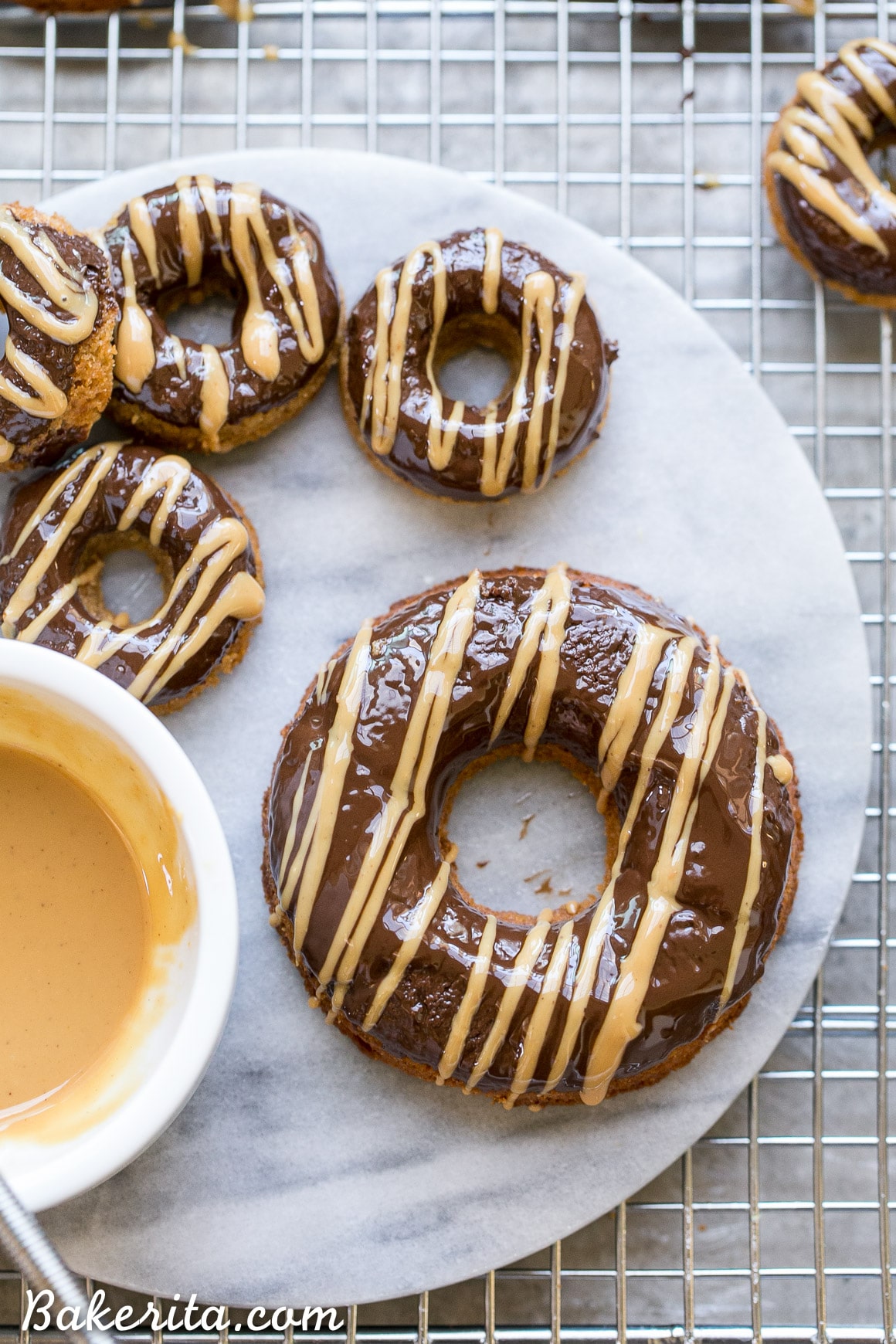 Coconut flour is the flour of choice here because it plays really nicely with the loads of peanut butter used, and you just need a little bit to tighten up the batter. Unfortunately, since coconut flour is so uniquely absorbent, it’s the only flour I’d recommend using in this recipe.

I baked some of the donuts in my bigger donut pan and they were totally good, but I definitely preferred the ones baked in the mini donut pan…mostly because the glaze:donut ratio was on point. The glaze is super simple – just a little dark chocolate melted with some coconut oil, and the peanut butter drizzle is just peanut butter and coconut oil. The coconut oil helps the chocolate and peanut butter set into a glaze at cooler temps. 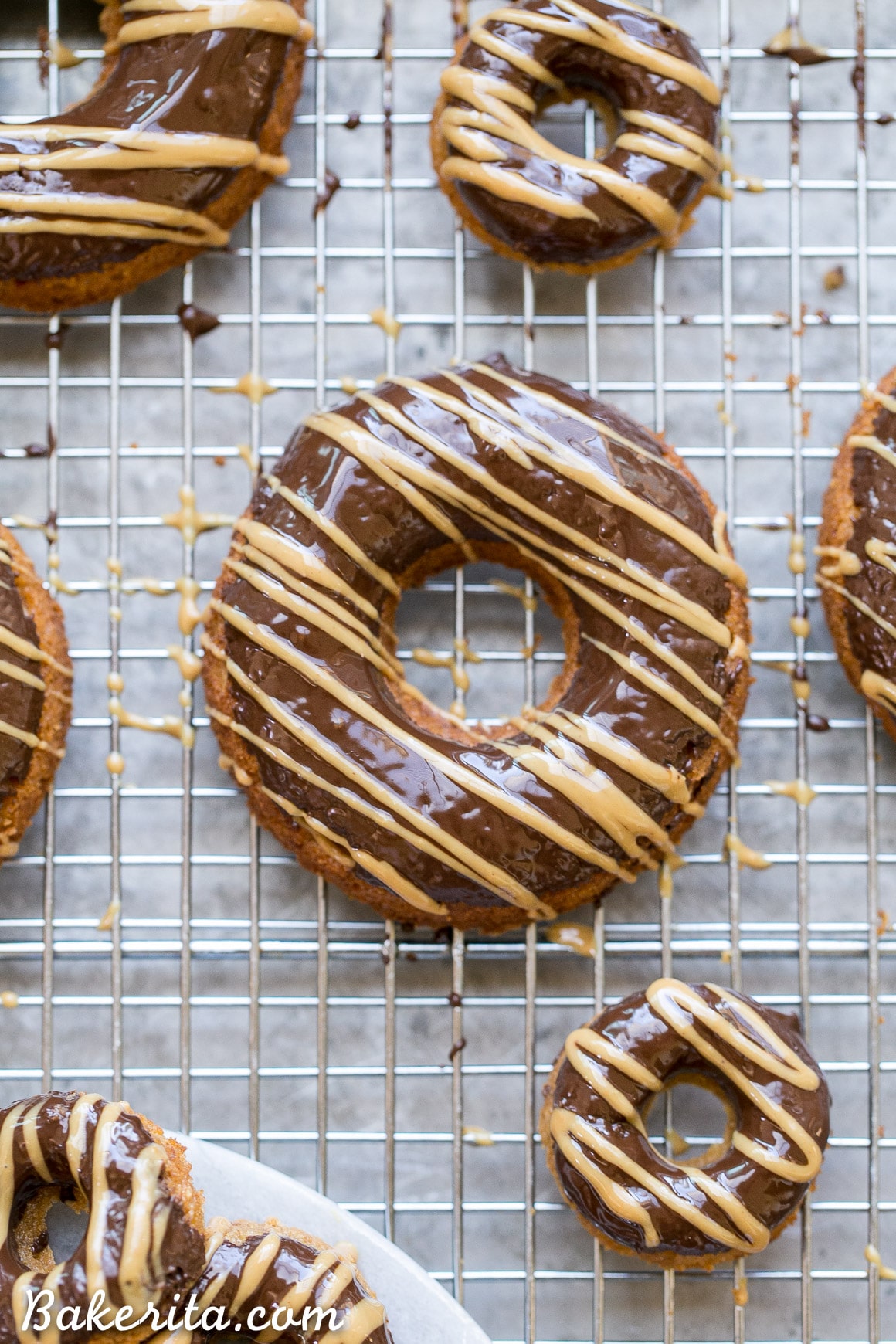 The mini donuts were also easier to dip and deal with, which is also a bonus. And they’re mini, so they’re automatically cuter. Win win win!  Time to get some peanut butter banana donuts in your mouth – happy baking, my friends!

If you are without a donut pan and don’t want to buy one for these, use a mini muffin pan instead!