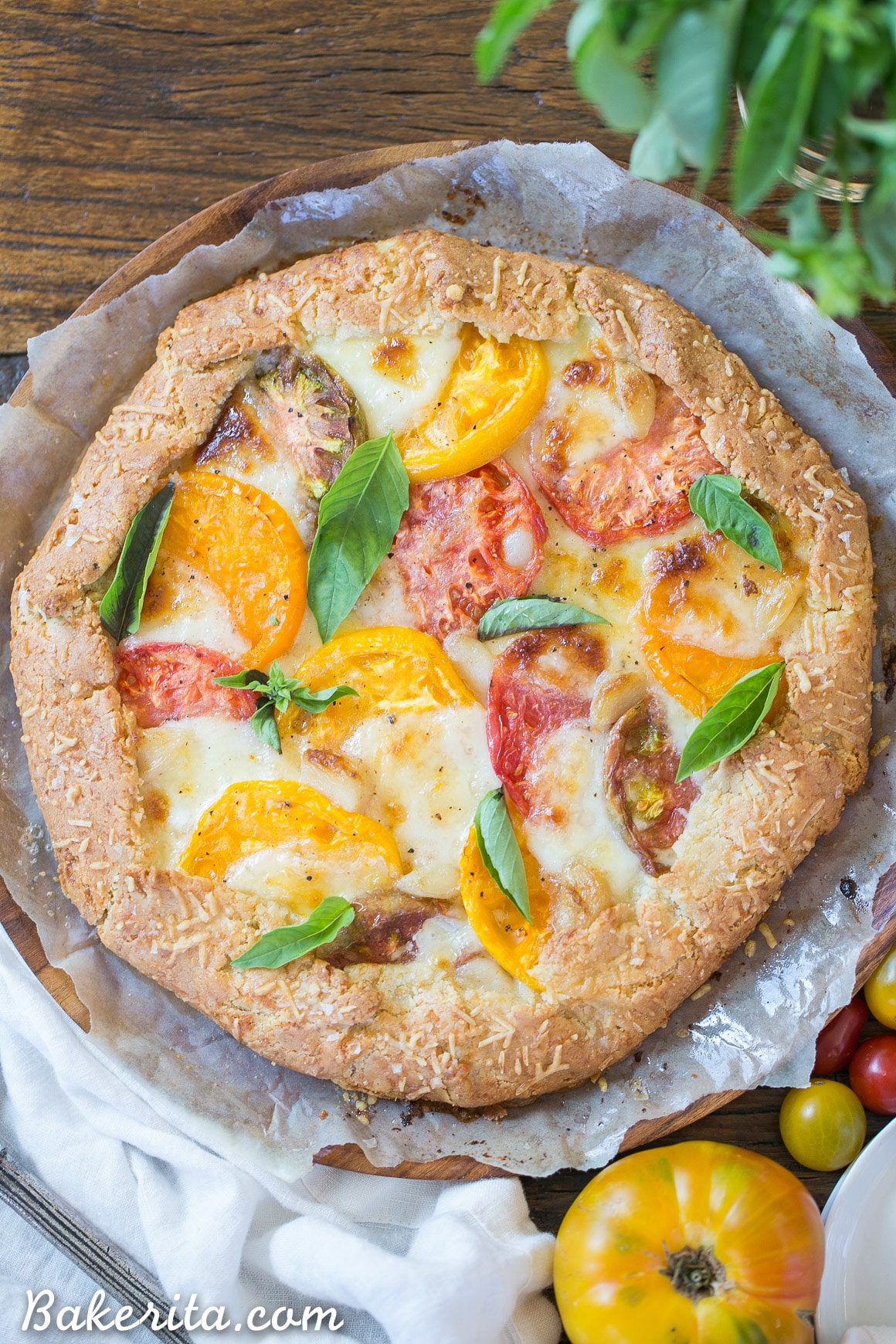 this recipe
Since I tried making my first galette earlier this year, this irresistible chocolate strawberry one, I’ve been having galettes on the mind rather often. A galette, if you’ve never had one before, is essentially a rustic version of a pie or tart. It has a similar flaky crust that’s rolled out, and it can have a fruity or savory filling, but instead of being placed in a pie dish or tart pan, the edges of the pastry dough are folded up and around the filling, forming a freeform kind-of pie.

After that initial Chocolate Strawberry Galette was such a raging success, I had dreams of a galette that could be dinner – I wanted something savory, full of veggies and cheese. From that, the Spinach Artichoke Galette was made…and subsequently devoured. 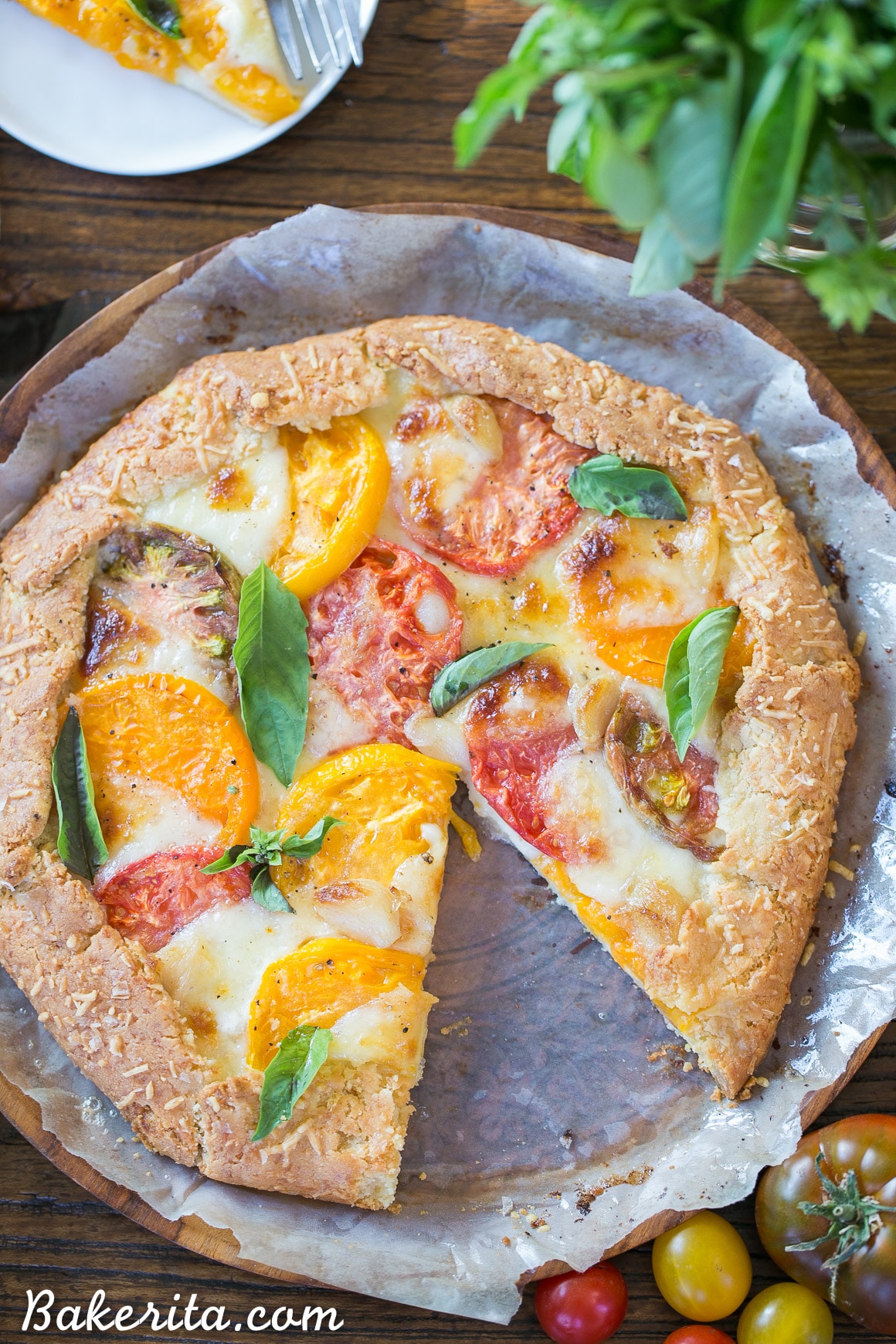 Now, in late summer, the galette gods were calling to me again, this time begging to show off one of summer’s most beautiful and flavorful bearings: heirloom tomatoes. Here at the San Diego farmer’s markets, there’s always piles of the misshapen, colorful heirloom tomatoes on the tables and I can never resist getting a bagful to last through the week. 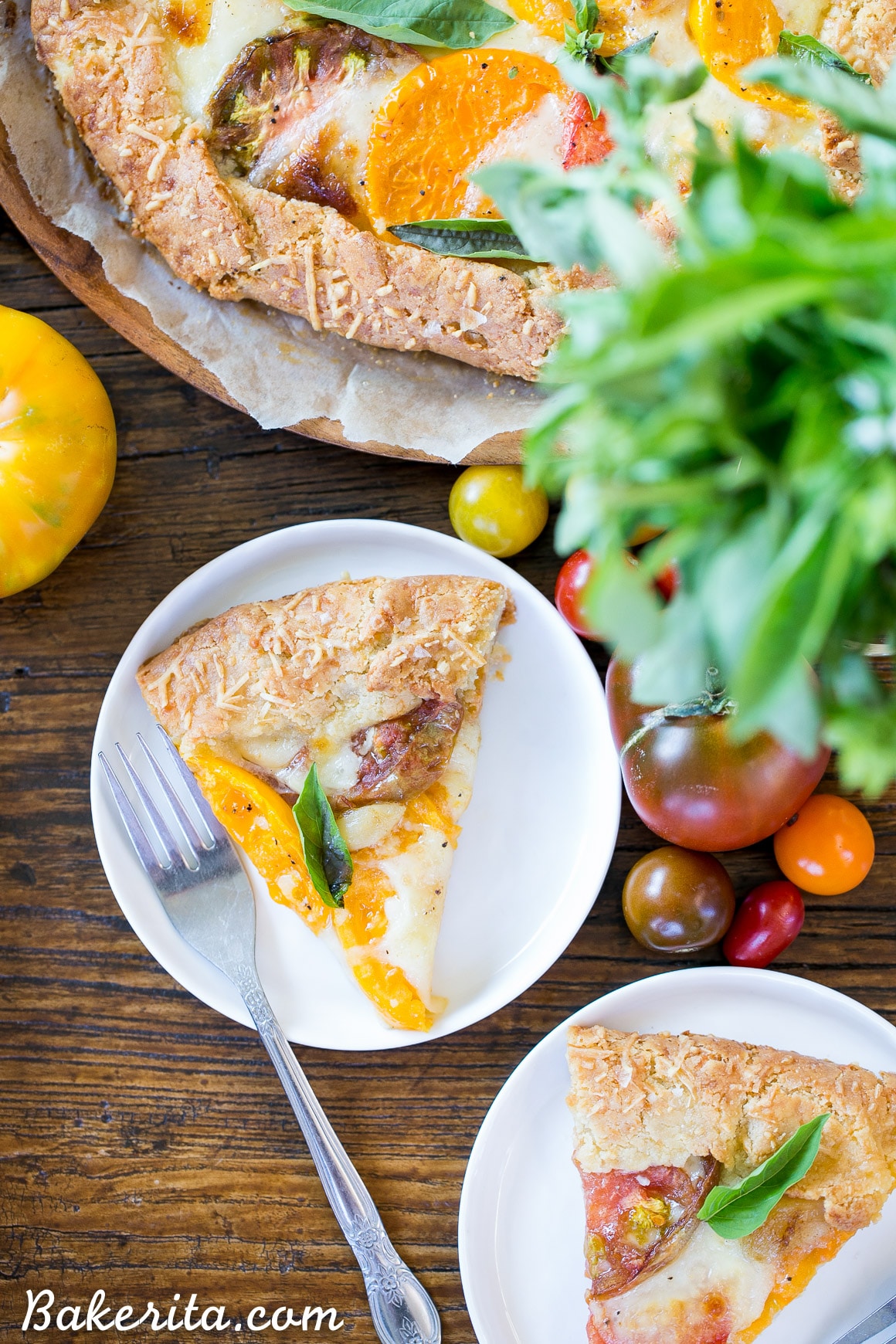 The fresh mozzarella melts beautifully with the tomatoes, and together with the basil on top, it tastes almost like a margherita pizza. As an after thought when I was going to grab the egg for the final egg wash, I spotted some roasted garlic cloves in the fridge.

I tucked them in between the layers of tomatoes and mozzarella, and the bites with the roasted garlic were definitely the best bites. If you don’t have any on hand and don’t want to go to the trouble, you can skip it, but if you’re a roasted garlic lover like me, you may think it’s worth it. (Here’s a how-to on roasting garlic from The Kitchn, if you need it!) 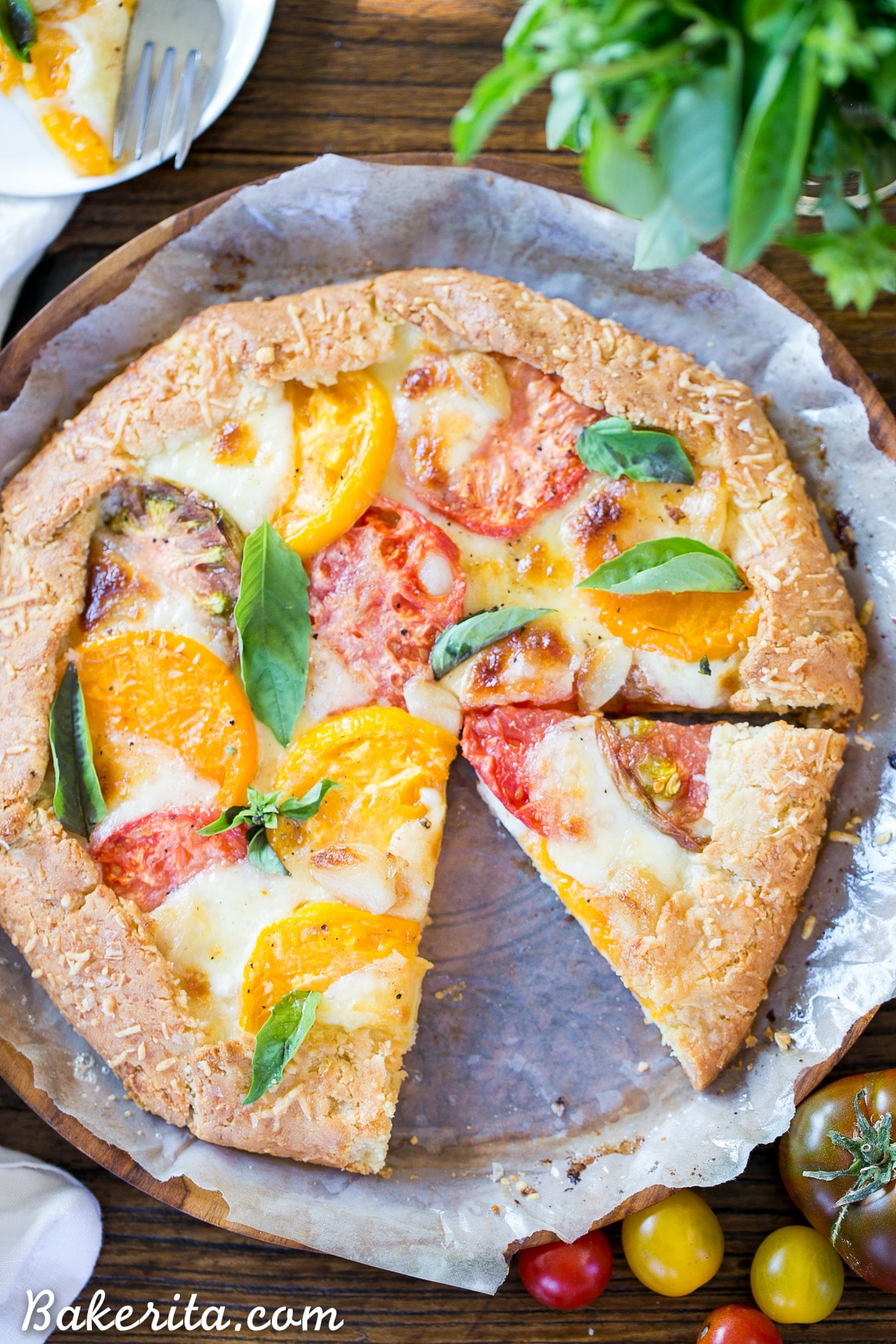 There’s one pesky step I ask you to take, but I promise it’s worth it to avoid a soggy crust/watery top. Heirloom tomatoes and fresh mozzarella both have a pretty significant amount of moisture, so to help draw some of that out, you sprinkle the slices of tomato with salt. Let ’em sit for a little bit, and pat both the tomato slices and mozzarella slices dry with a paper towel before using them in the galette. It’ll help draw out some of that excess moisture, for your more inevitable galette success.

And now…last but most certainly not least – this tomato galette features an oh-my-goodness-SO-good Parmesan crust. I have dreams about this crust, and there needs to be a whole lot more Parmesan crusted galettes in my future. It blows my mind that it’s gluten-free and grain-free! 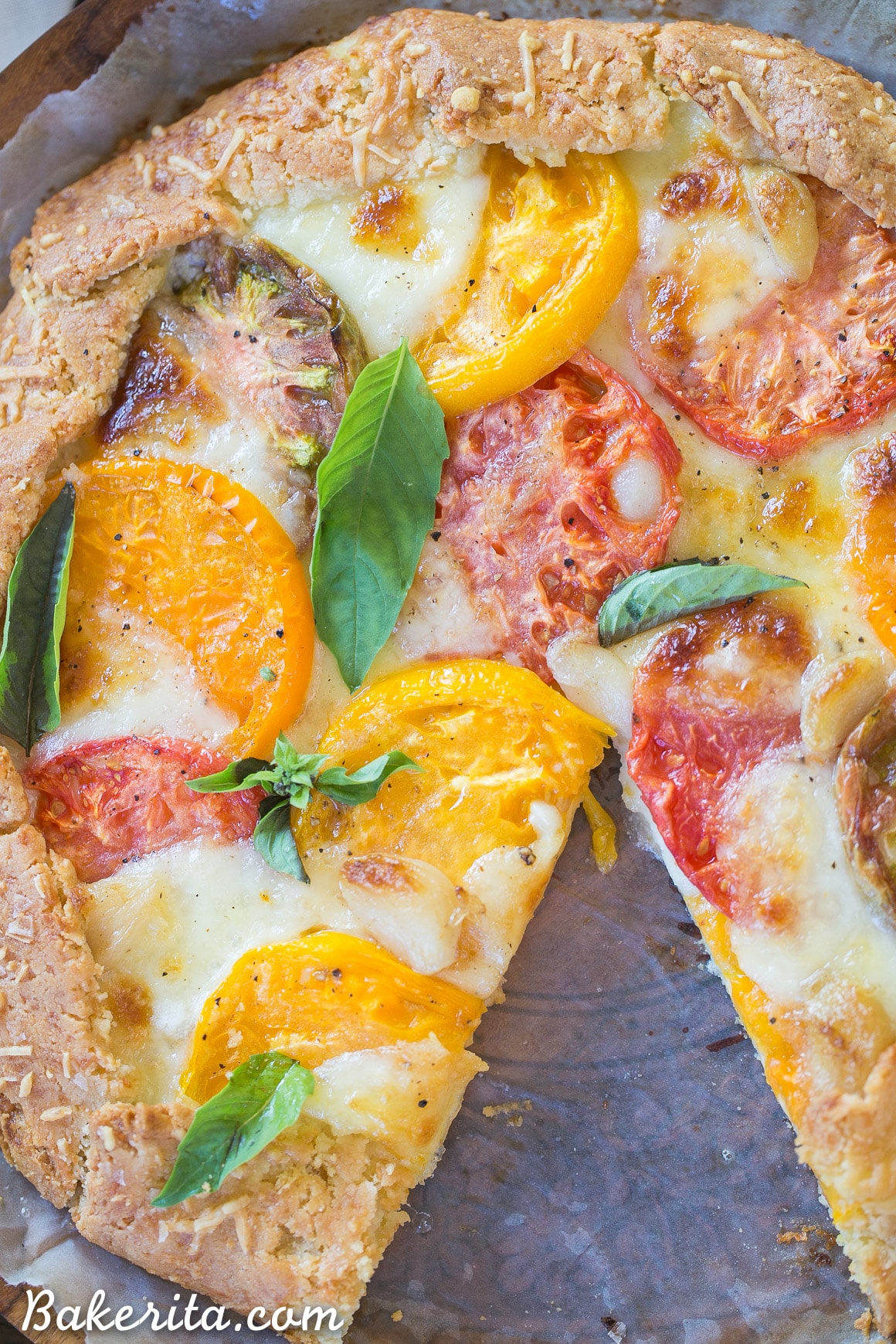 It’s made similarly to a pie crust, but with almond and tapioca flours, and a 1/4 cup of Parmesan cheese in the mix. Butter helps keep things super flaky – but make sure you don’t work it in too much, because it’s those big butter blobs that help make the flakiest crust around.

Serve this mozzarella heirloom tomato galette fresh out of the oven, and reheat it in the oven or toaster oven if you have any leftovers. It was just as good reheated! Paired with a salad, this makes a wonderful lunch or dinner. Enjoy :) 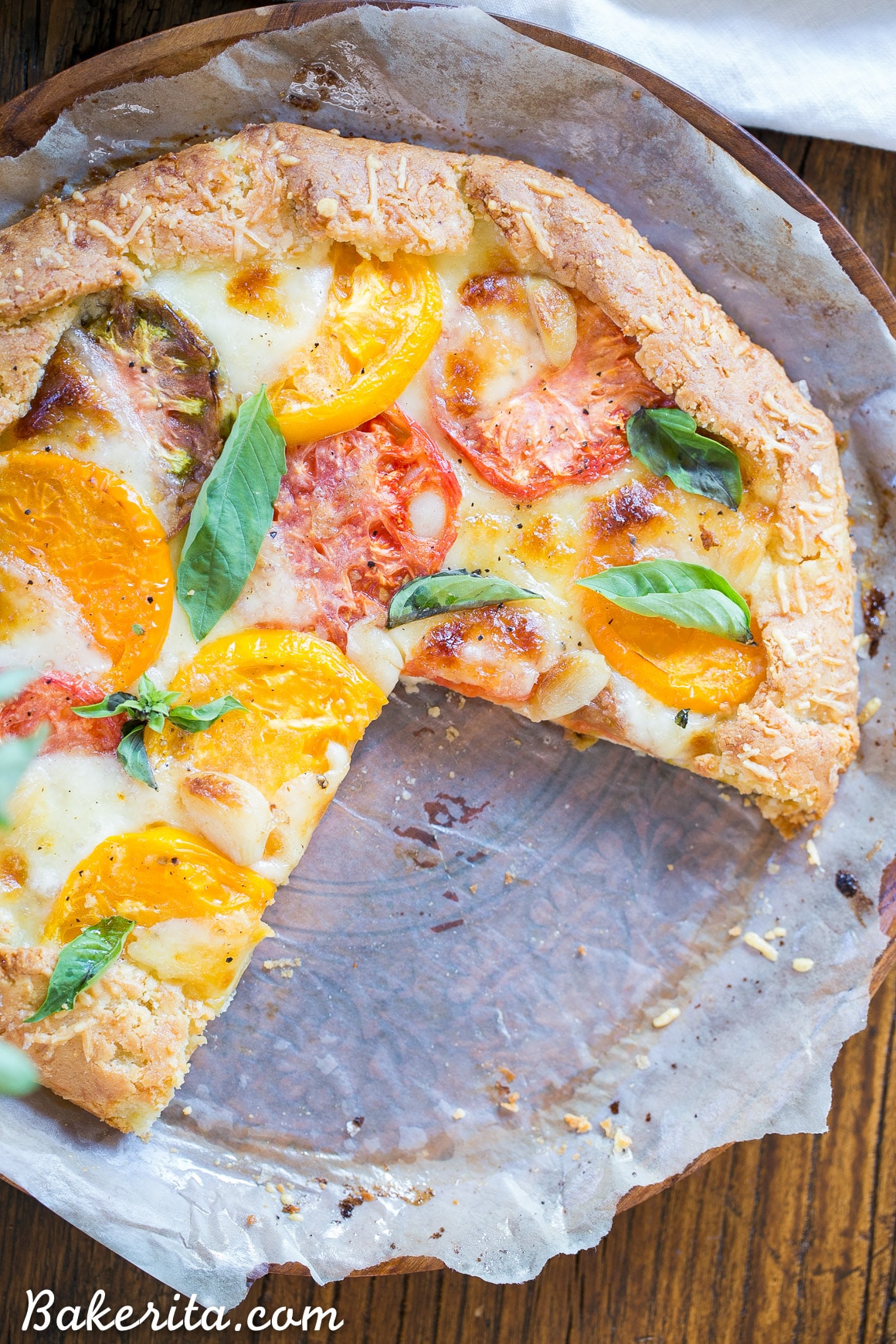