This Cranberry Apple Crisp is spiced with cinnamon, nutmeg & orange zest and topped with a crunchy pecan oatmeal crisp topping. This gluten-free and vegan crisp is the perfect holiday dessert! 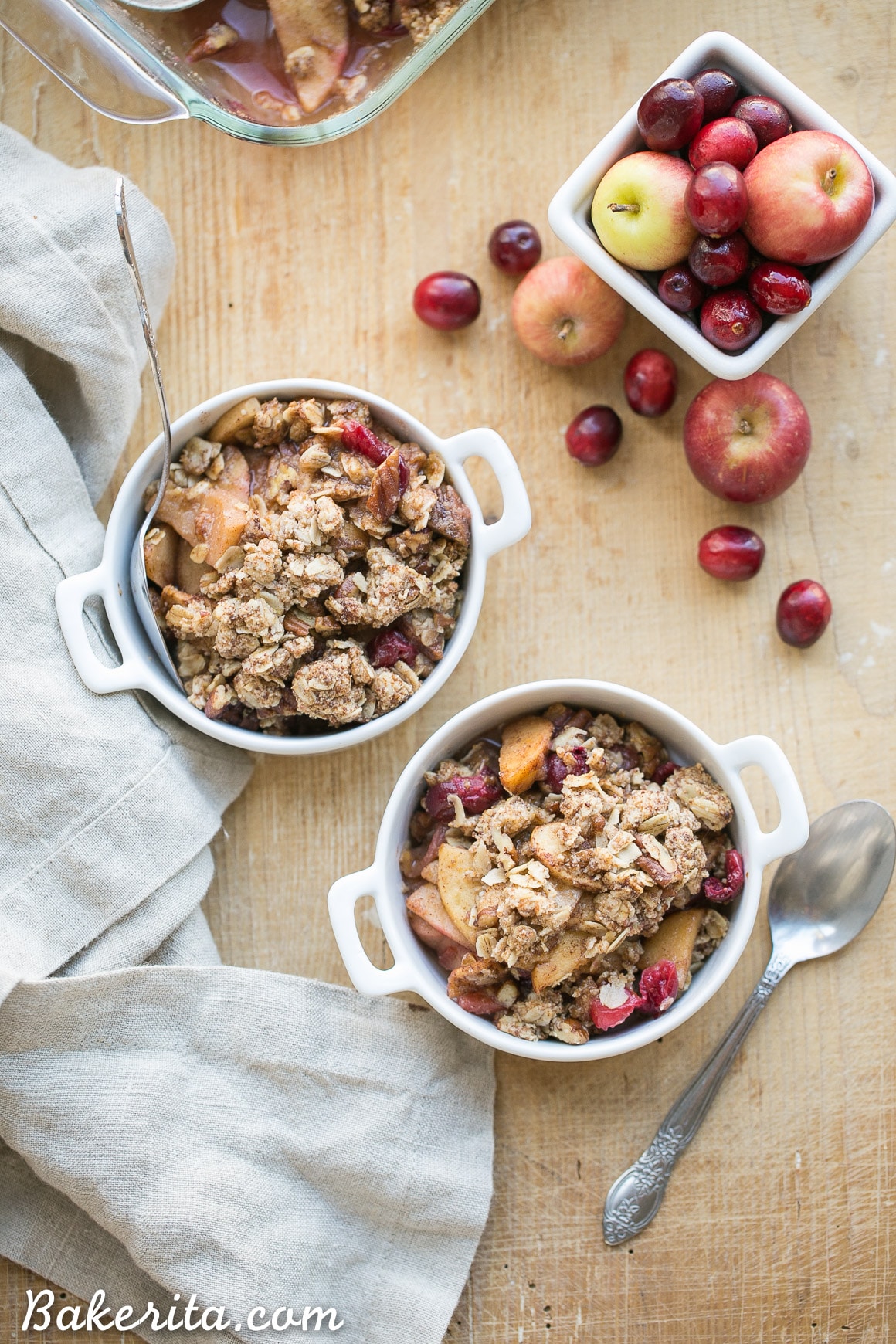 this recipe
Are you a planner or a procrastinator? I know some of us have already had the whole Thanksgiving menu planned out for weeks now…and then there’s the other group, who’ll be running frantically to the grocery store for another bag of potatoes the morning of Thanksgiving. Which group are you in?!

I’m typically in the planner group – leaving things until the very last minute has always given me anxiety, so I made sure that my family knew who was making what for our Thanksgiving feast earlier this week. 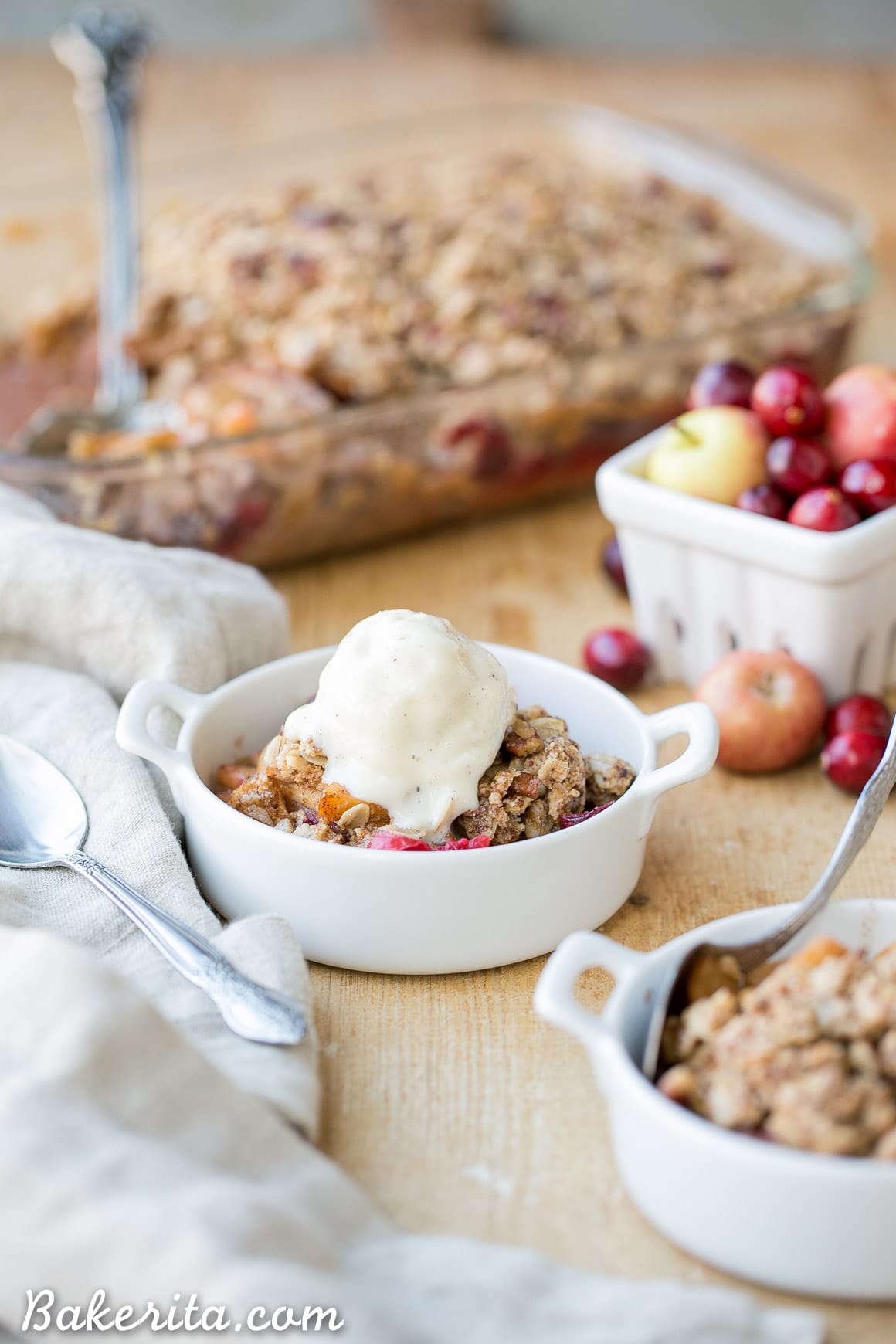 There’s always some last minute drama…like the year my aunt dropped the sweet potato casserole and it shattered all over the floor and I had to remake it ASAP, so having dishes prepped and ready early leaves more time to deal with the inevitable day-of disasters.

For my family’s feast, I took charge of brussels sprouts (going to make them with bacon, pecans + balsamic glaze – YUM), homemade cranberry sauce, and obviously, desserts. 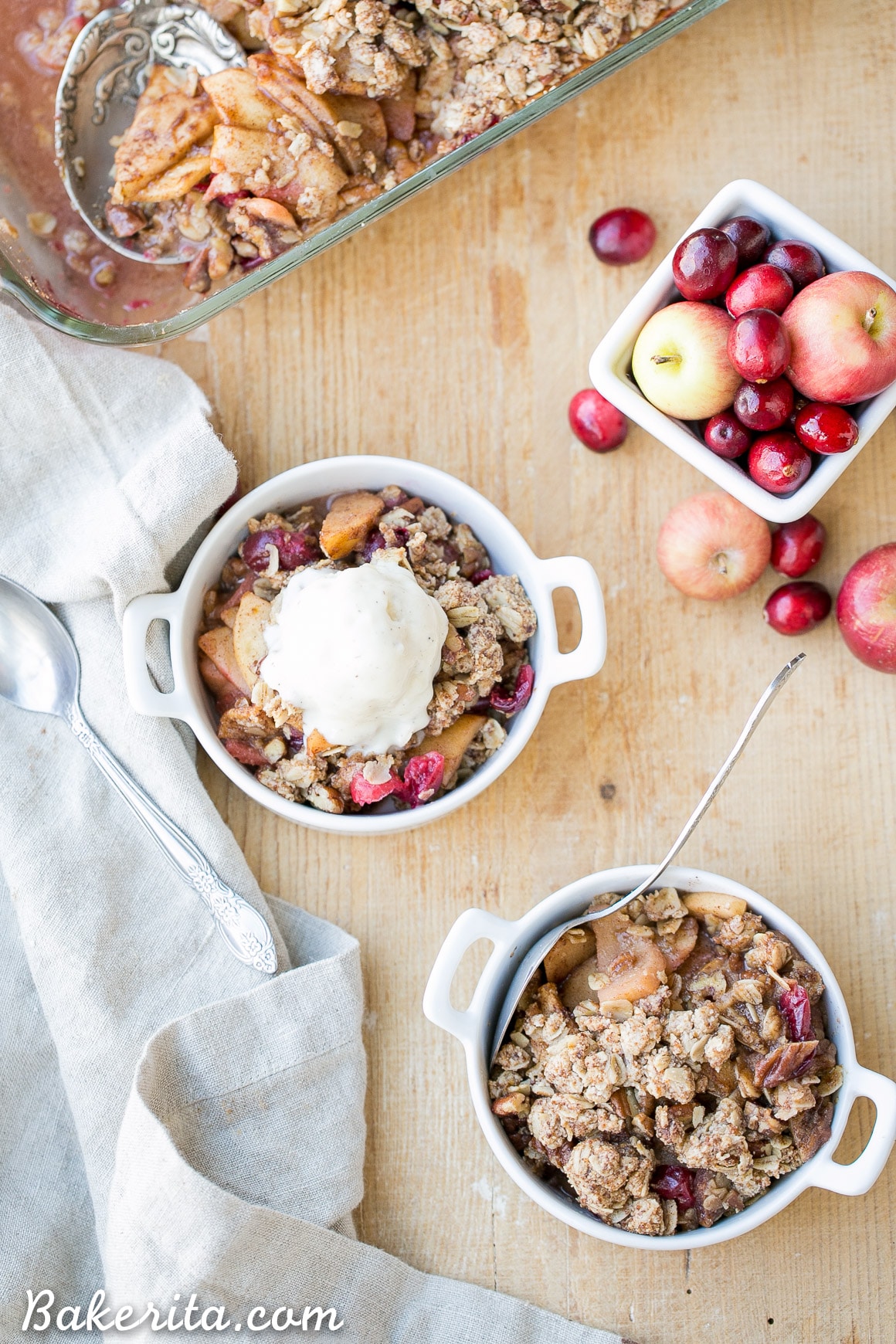 The Paleo Chocolate Pecan Pie I posted a few posts back is a shoo-in for the dessert table after my Aunt tried it and insisted it be a part of the feast, along with my Paleo Pumpkin Pie, a batch of Gluten Free Pumpkin Chocolate Chunk Cookies, a TBD birthday cake for my aunt, and…*drumroll please* this cranberry apple crisp!

I’ve long claimed apple crisp as one of my absolutely favorite desserts, but I think this version with the added fresh cranberries takes the cake! This crisp has got everything we love about apple crisp – the juicy, tender apples coated in warm spices, the mouthwatering smell as it bakes, and the crunchy crisp topping. 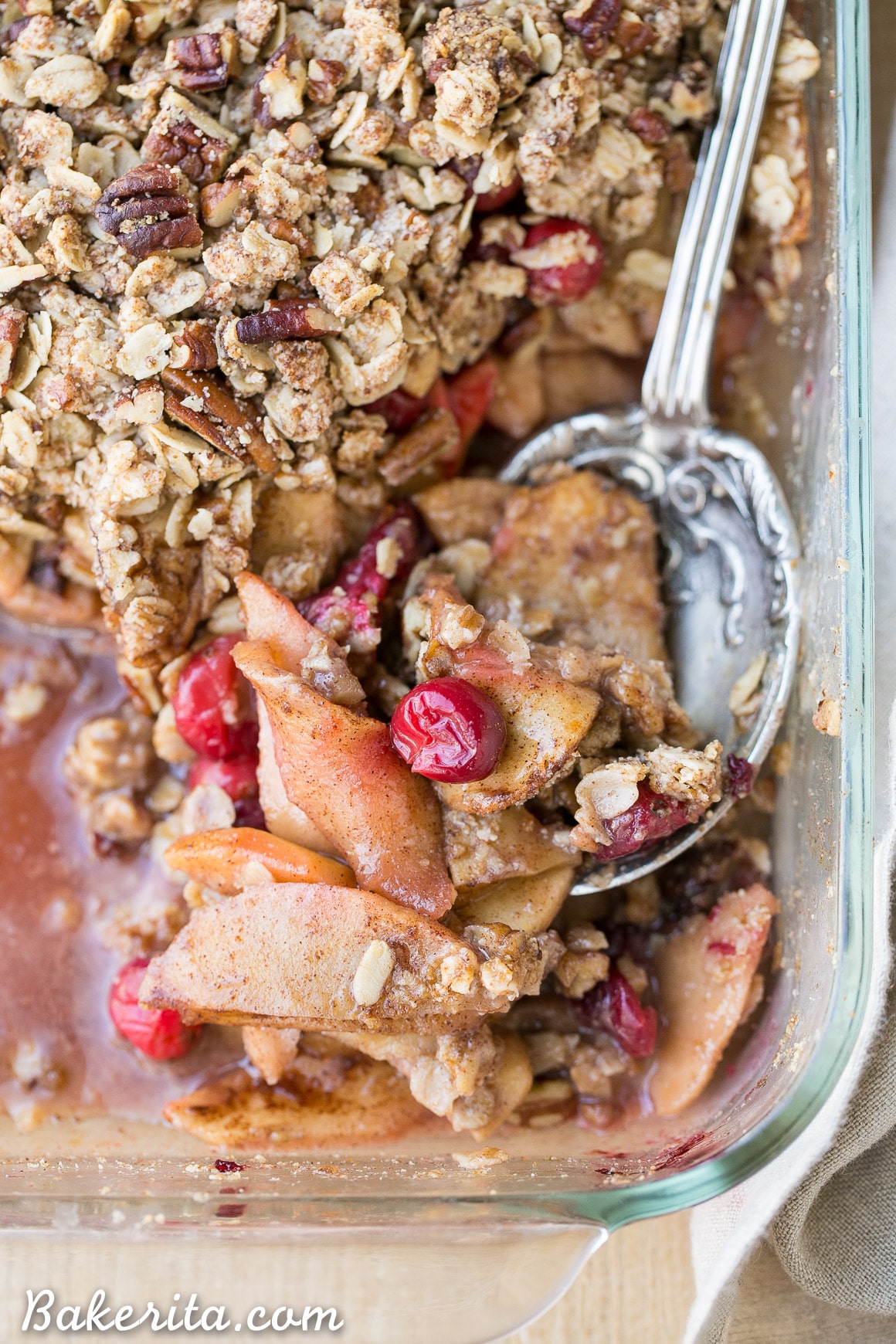 The fresh cranberries really help to invigorate this classic favorite though – they have such a bright, tart flavor that’s so well complemented by the cinnamon, nutmeg, and orange zest flavoring the apple cranberry filling. The coconut sugar and maple syrup add just enough sweetness to balance it all out, too.

The oatmeal crisp topping is crunchy, just sweet enough, and studded with chopped pecans – I have a hard time not picking it off the top to eat! This cranberry apple crisp can be assembled ahead of time, too – perfect for the planners among us. Put the whole crisp together but don’t bake it, just wrap in foil and put in the fridge for up to 2 days. Then when you’re ready to bake, just pop it in the oven and let her bubble :) 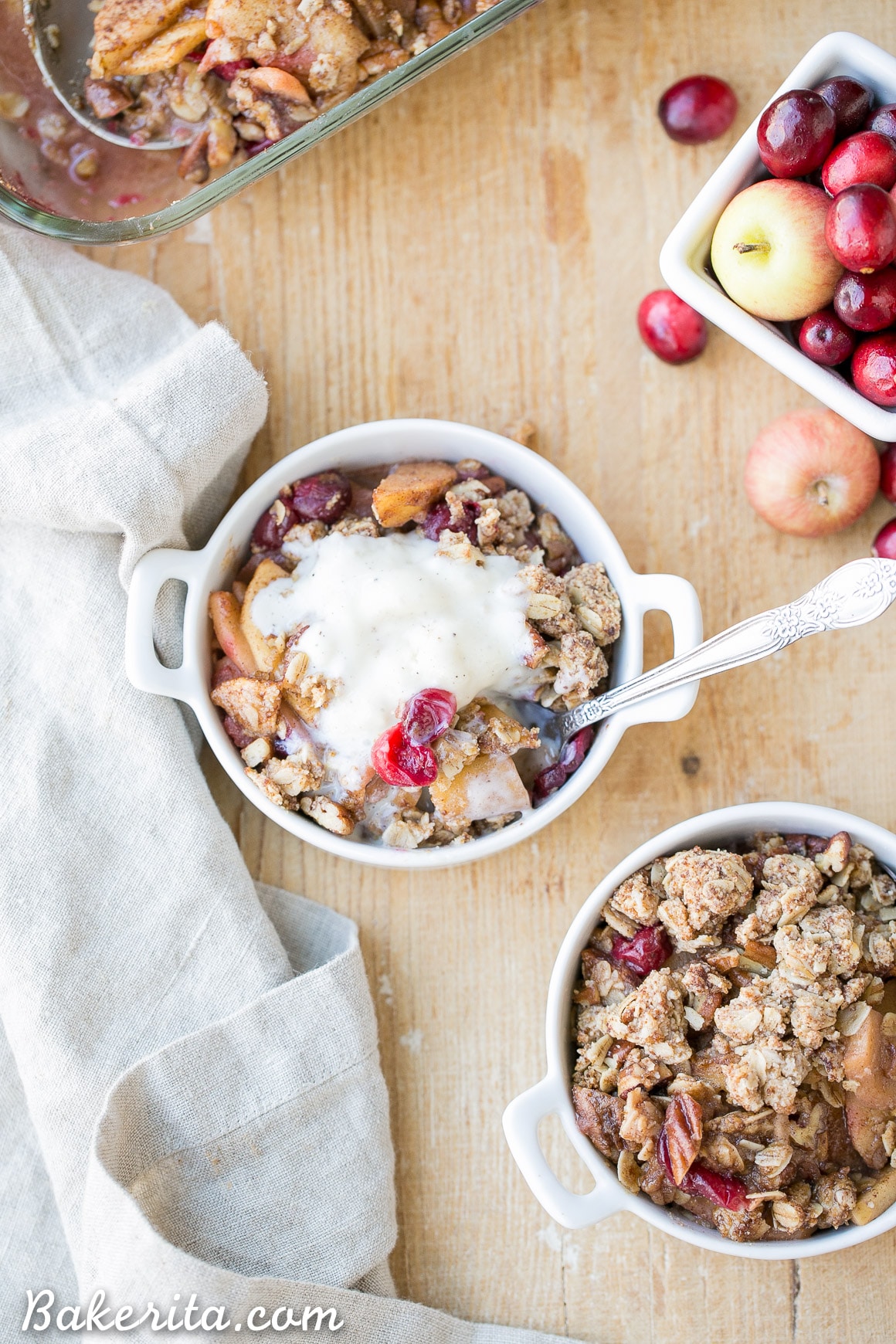 When it comes to serving crisps at events when the ovens going to be used all day, like Thanksgiving, I like to wait until dinner’s done cooking, and toss the crisp in the oven while everyone’s eating. Then, just as the feast is done, a fresh, bubbling hot cranberry apple crisp is getting pulled from the oven. Pretty ideal, huh? Everyone loves a hot apple crisp – especially served with a scoop of ice cream or whipped coconut cream.

If you manage to have leftovers, this crisp does delicious breakfast duty when paired with some plain Greek yogurt – it’s a yogurt parfait made WAY better. However you have it, it’s hard to resist the spiced apple cranberry filling and pecan oatmeal crisp topping of this cranberry apple crisp. Enjoy!

For the crisp topping

This recipe doubles easily if you’re baking for a crowd. If doubling, bake in a 9×13″ pan and add about 10 minutes to the baking time.