This Chocolate Chunk Zucchini Bread is soft and moist with a tender crumb, and it’s not too sweet. This quick bread is Paleo friendly, gluten-free, grain-free, and refined sugar-free. 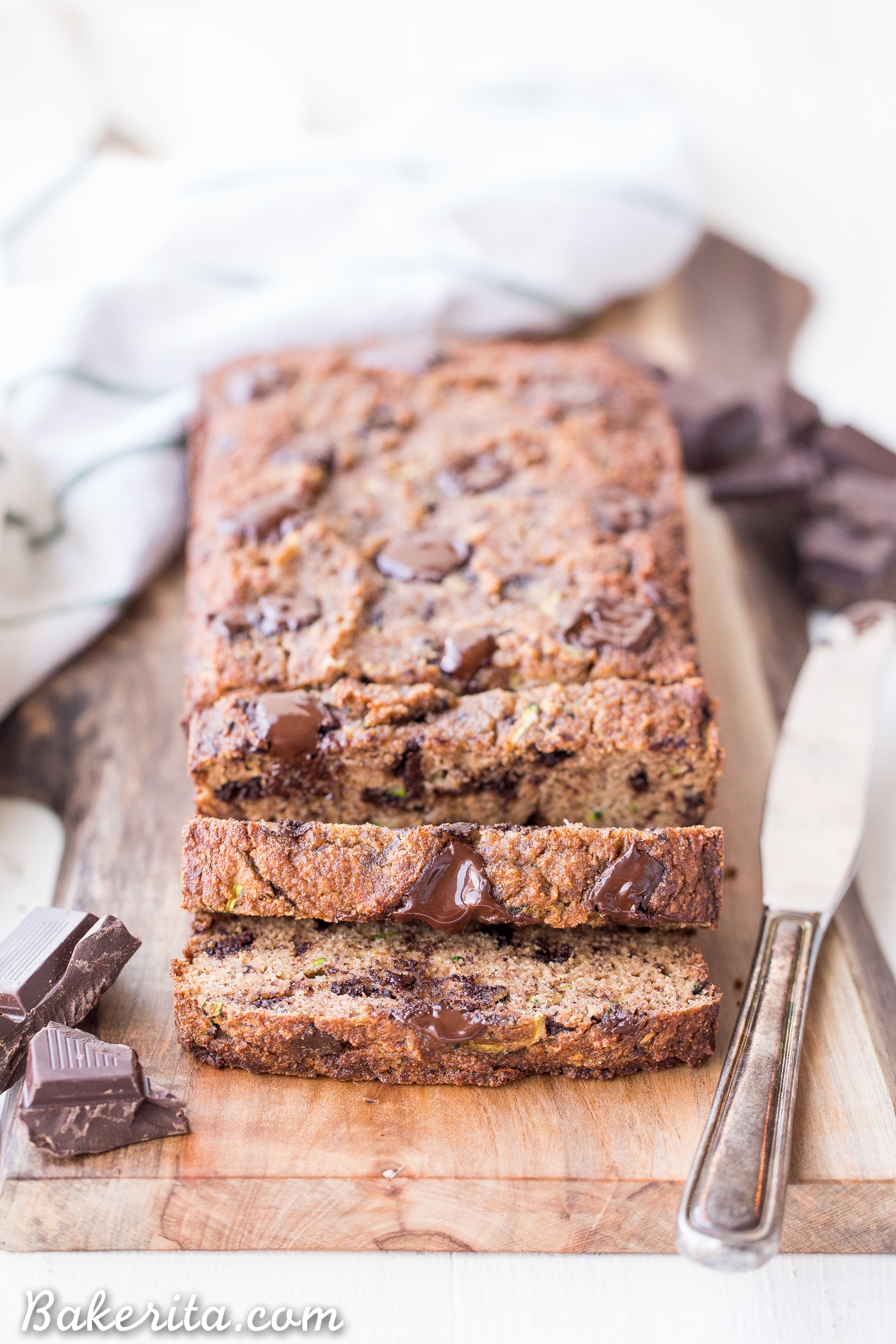 **2017 Update** As summer continues and my crisper drawer is filled with zucchini, I had a hankering for zucchini bread – this Paleo Chocolate Chunk Zucchini Bread came to mind, and its original photos from August 2014 weren’t doing the recipe justice.

I reshot the recipe with some nice new photos, and have been devouring this bread slice by slice. Sometimes straight from the fridge, more often after 20 seconds in the microwave to melt those chocolate chips. It’s also scrumptious slathered with nut butter. This one is a must try – read the original post below for recipe details and enjoy! 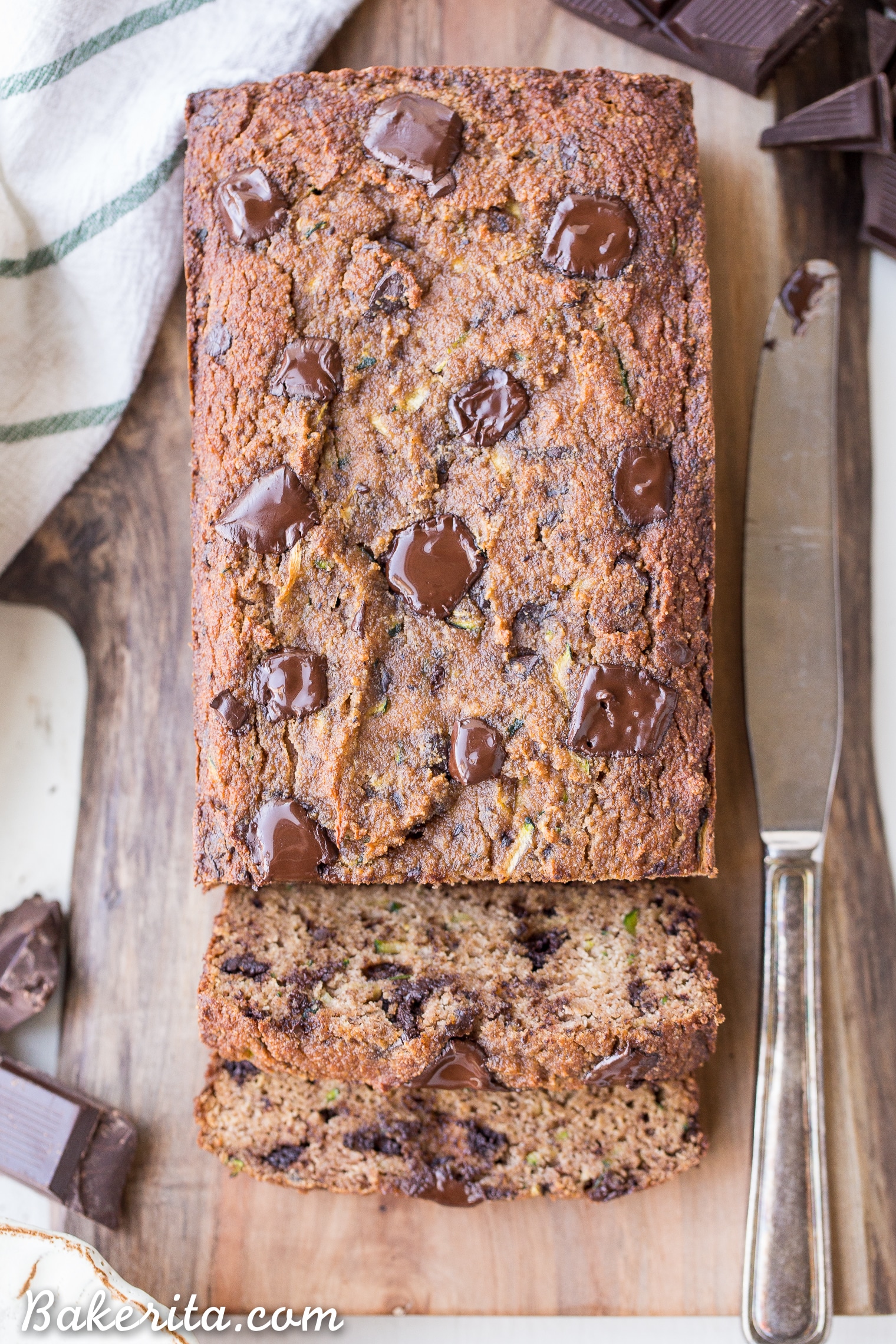 Sooo this was the first time I’ve ever had zucchini bread, but now I totally get what all the fuss is about. This stuff is delicious!

Now I wish I was one of those people who had the problem of way too many zucchinis in the summer, because in addition to my spiralized zucchini dinners that I’ve been obsessed with this summer, I now want to make this zucchini bread all. the. time. 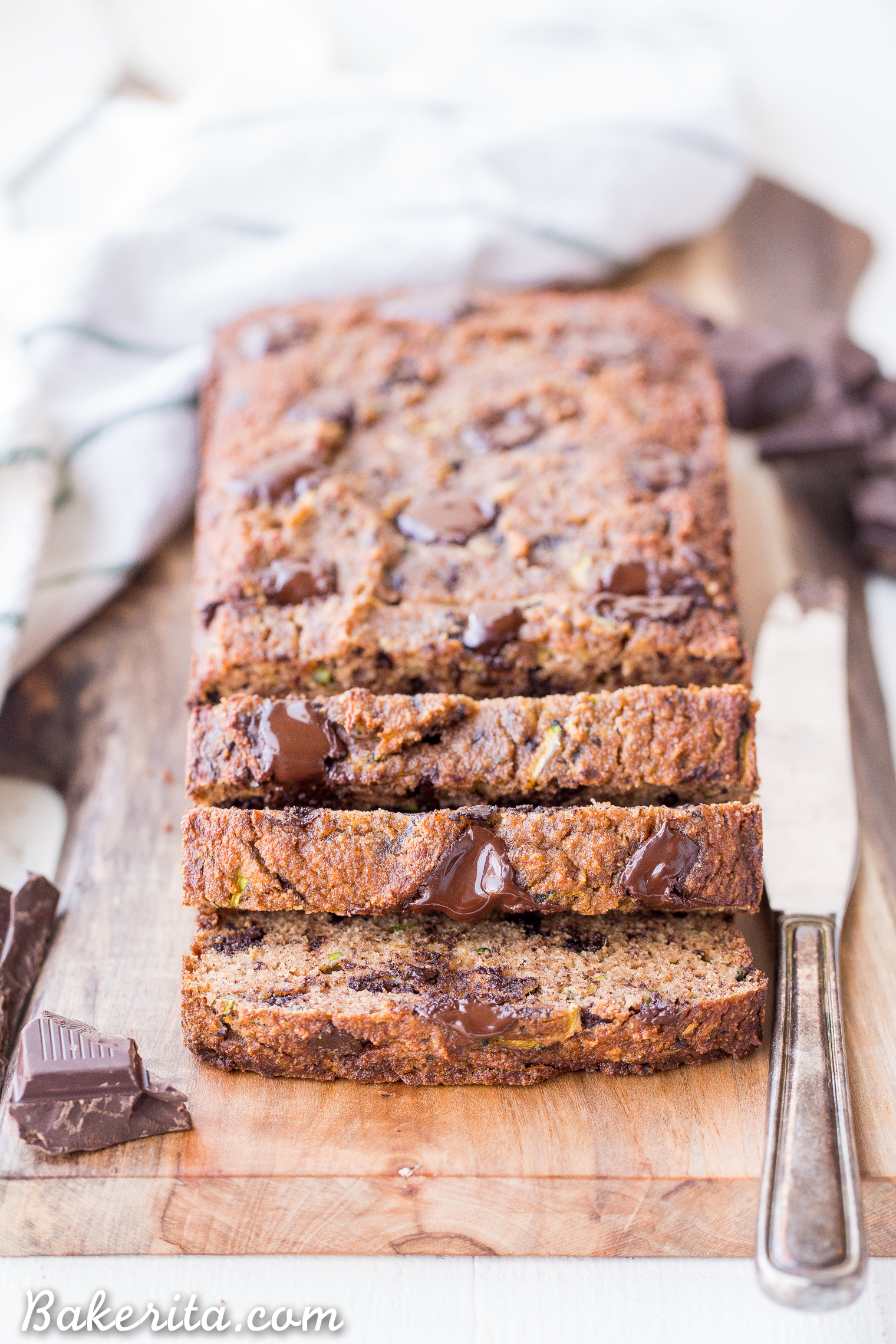 For my first time making zucchini bread, I decided to go the “healthy” route, because I figured what the heck is the point of putting a vegetable in your baked goods if you just go and overload with a whole bunch of sugar, oil, and flour? The best part about this healthy route though, is that not one of the people who tried it (which was a lot) noted that it was healthy. I take that as a major win, because isn’t that the whole point of making healthy desserts?

I read a lot about making zucchini breads before I dove into do it myself, and I noticed a lot of complaints about sogginess and too much moisture. I really wanted to avoid that, so I took two precautions: 1) squeeze the heeeeck out of that zucchini! I squeezed the grated zucchini over the sink to get as much water out as I could, and then I laid it out on a paper towel and squeezed it in that too. My zucchini was pretty dry by that point, and I recommend you follow the same steps so you don’t end up with a soggy loaf! 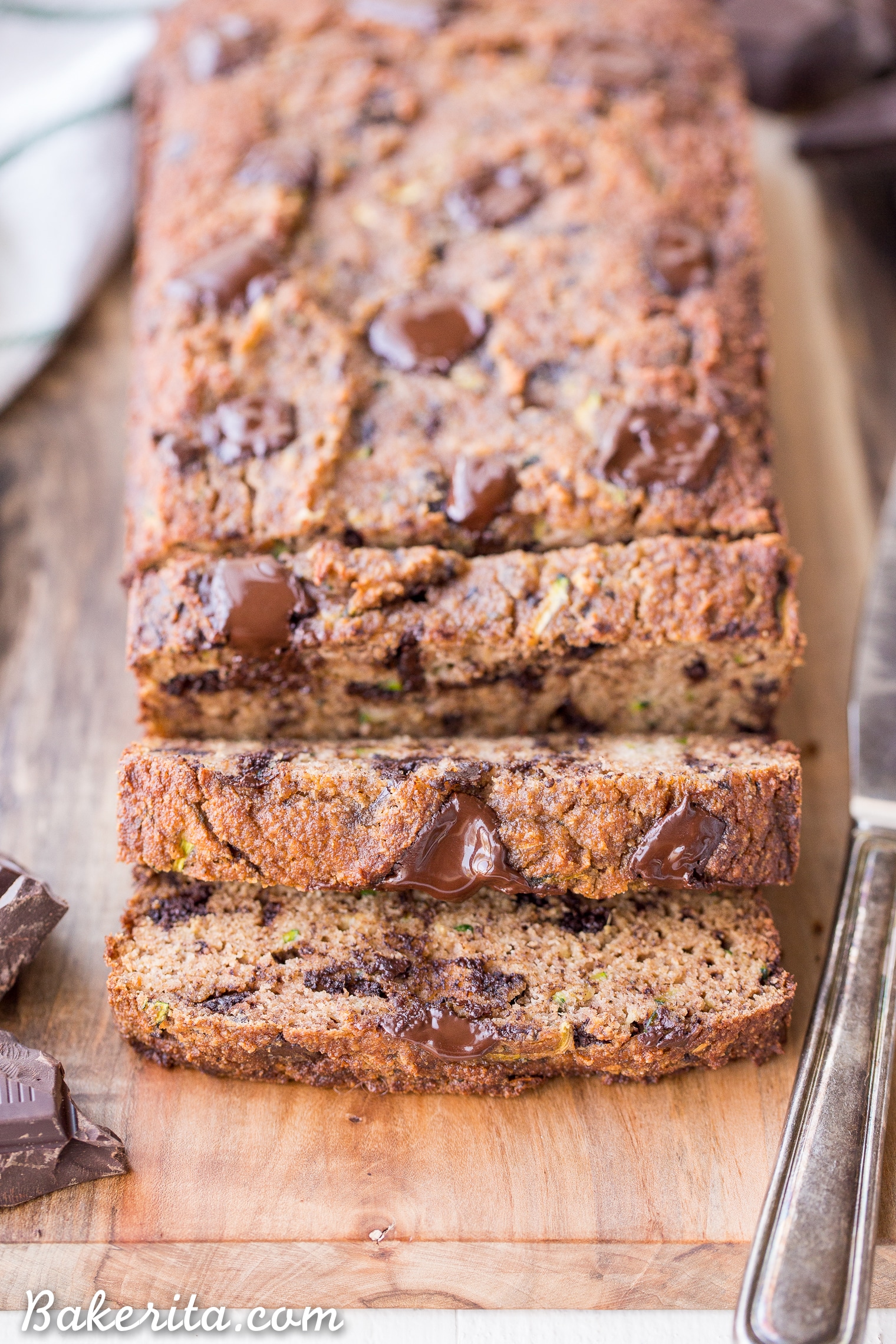 The second precaution is the use of coconut flour. Please don’t be tempted to switch it for something else – coconut flour is magical at soaking up that little extra bit of moisture in a recipe, because it acts like a sponge. You only need a little bit, but it makes all the difference in this recipe! (It’s also pretty easy to get now – they even have it at Trader Joe’s for a really good price!)

I’m in the camp that believes chocolate makes absolutely everything better, so of course I threw in some chopped chocolate chunks. The bread isn’t too sweet on it’s own, since it only uses 3 tablespoons of maple syrup, so the chocolate adds a nice bit of extra sweetness to the bread. 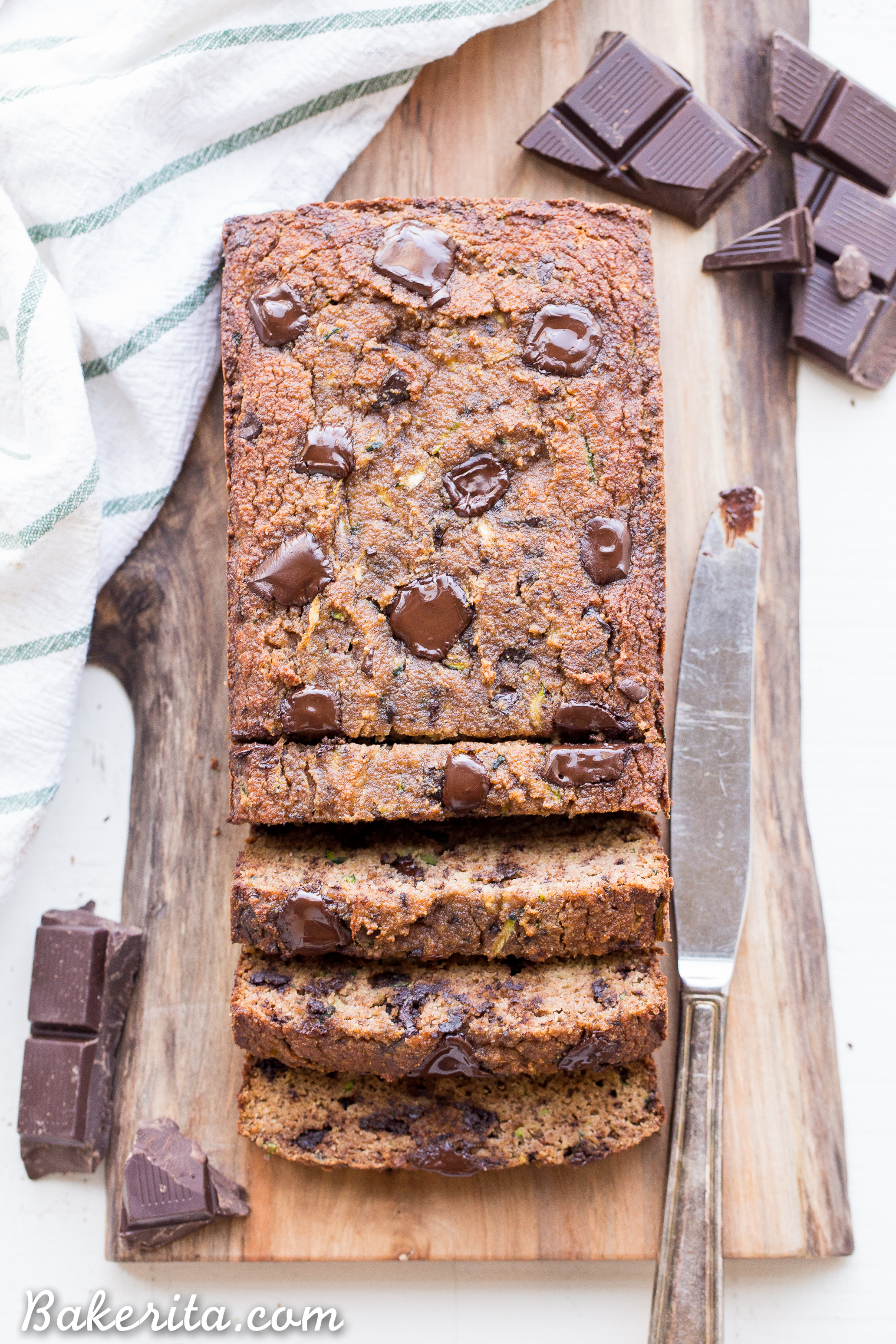 I didn’t use too many – just enough for a bit of the decadence chopped chocolate brings. In loaves like this, I prefer chopped chocolate over chocolate chips, because the waxes in chocolate chips prevent them from melting to that super ooey gooey melty texture that absolutely makes a bread like this that much better. Try it – you’ll see what I mean. If you want to make sure this bread stays Paleo/refined sugar free, try making your own paleo-friendly chocolate chunks!

The texture of this bread is amazing – it’s soft and tender and definitely not dry, but also not overly soggy or wet. I also love the green streaks running through it from the zucchini, though you may want to peel the zucchini if you’re trying to hide the veggies from your kiddos. Kids will absolutely love this as well. Though there isn’t a lot of added sweetener, the banana also helps sweeten the bread up so you definitely don’t miss the extra sugar so many quick breads call for. 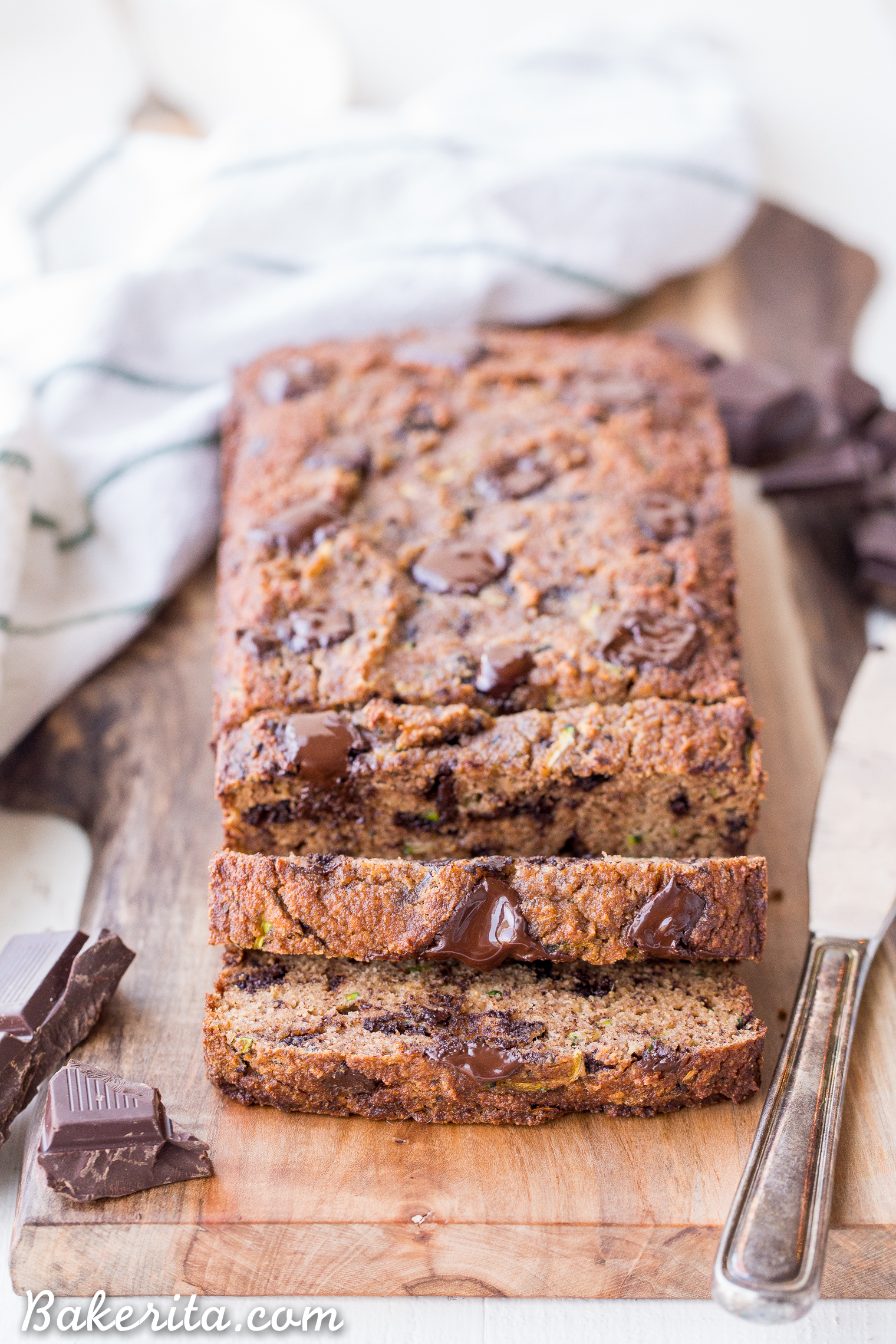 I could ramble on more and more about how awesome this bread is, but I literally just got up from writing this post to go take another bite of the (very small) piece that’s left, and I don’t even know what else to say but…go try it. As far as quick breads go, this is up there as one of my favorites with my almond banana bread and chocolate chunk banana bread.

And I need to finish this post so I can go get another piece. Enjoy! 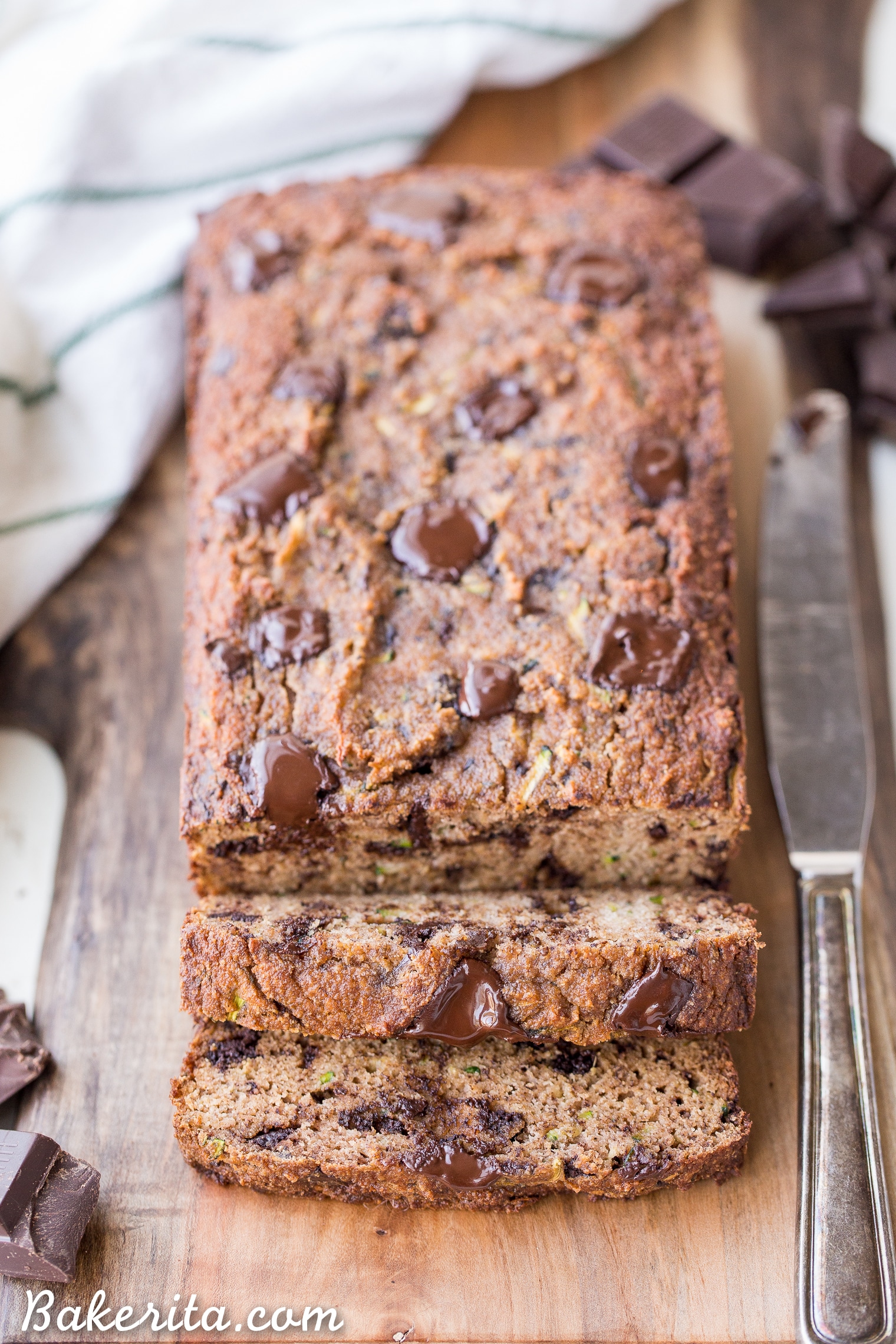 Want more quick breads?! Then you’ve got to try these delicious favorites…

This Chocolate Chunk Zucchini Bread is soft and moist with a tender crumb, and it’s not too sweet. This quick bread is Paleo friendly, gluten-free, grain-free, and refined sugar-free.