This No Bake S’mores Cheesecake has a graham cracker flavored crust topped with chocolate ganache, rich chocolate “cheesecake” made with soaked cashews, and a layer of homemade toasted marshmallow on top! You’d never guess this decadent dessert is gluten-free, dairy-free, and Paleo. 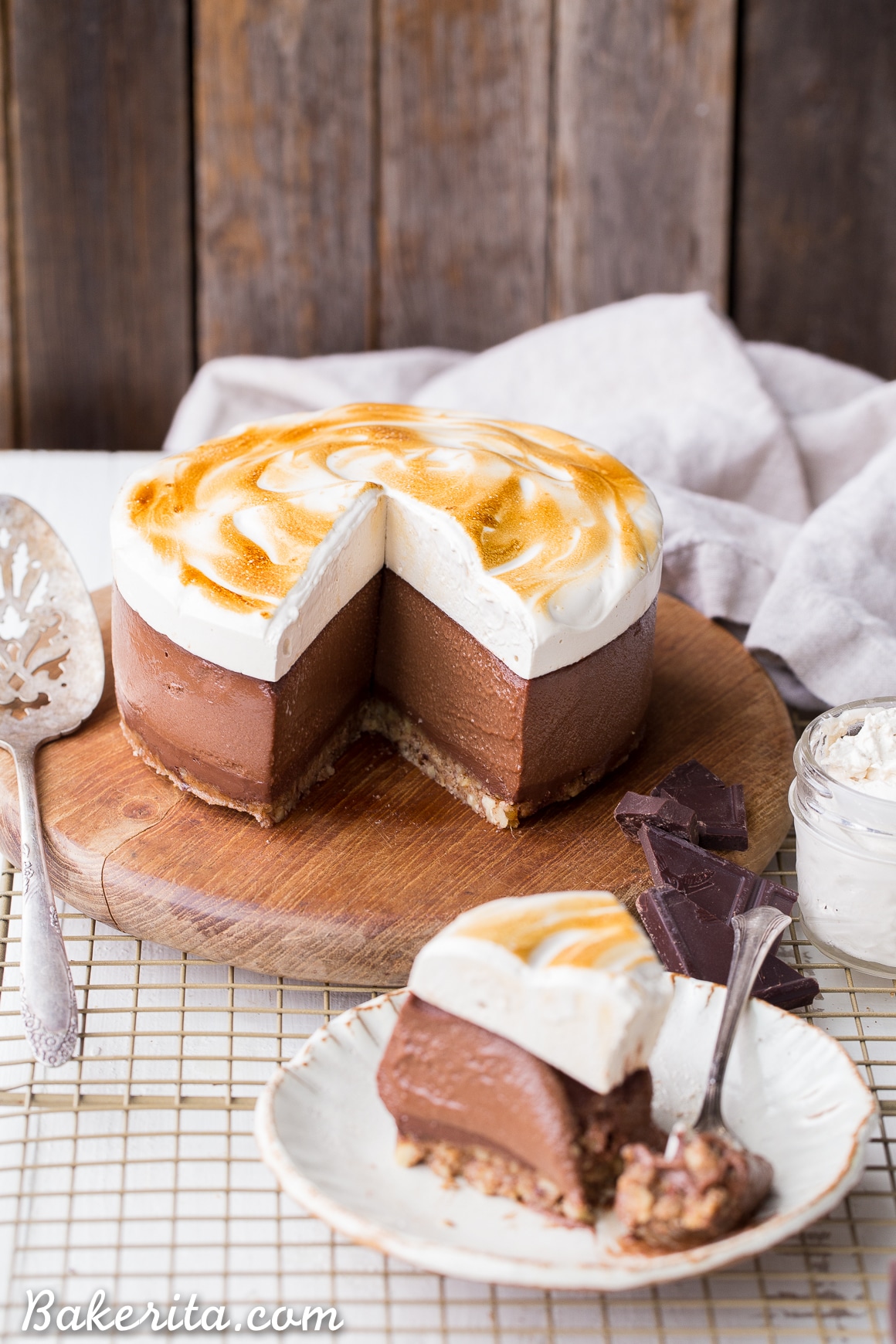 This was one of those recipes I was a little nervous to make, not because I didn’t think it would taste delicious, but because I was sure that it would never turn out looking the way I was envisioning in my head.

I imagined a dark, deeply chocolatey cheesecake layer, on top of a layer of chocolate ganache and a “graham cracker” flavored crust, with a pile of toasted marshmallow fluff on top. Each step of the way, I was doubting myself that it would turn out. 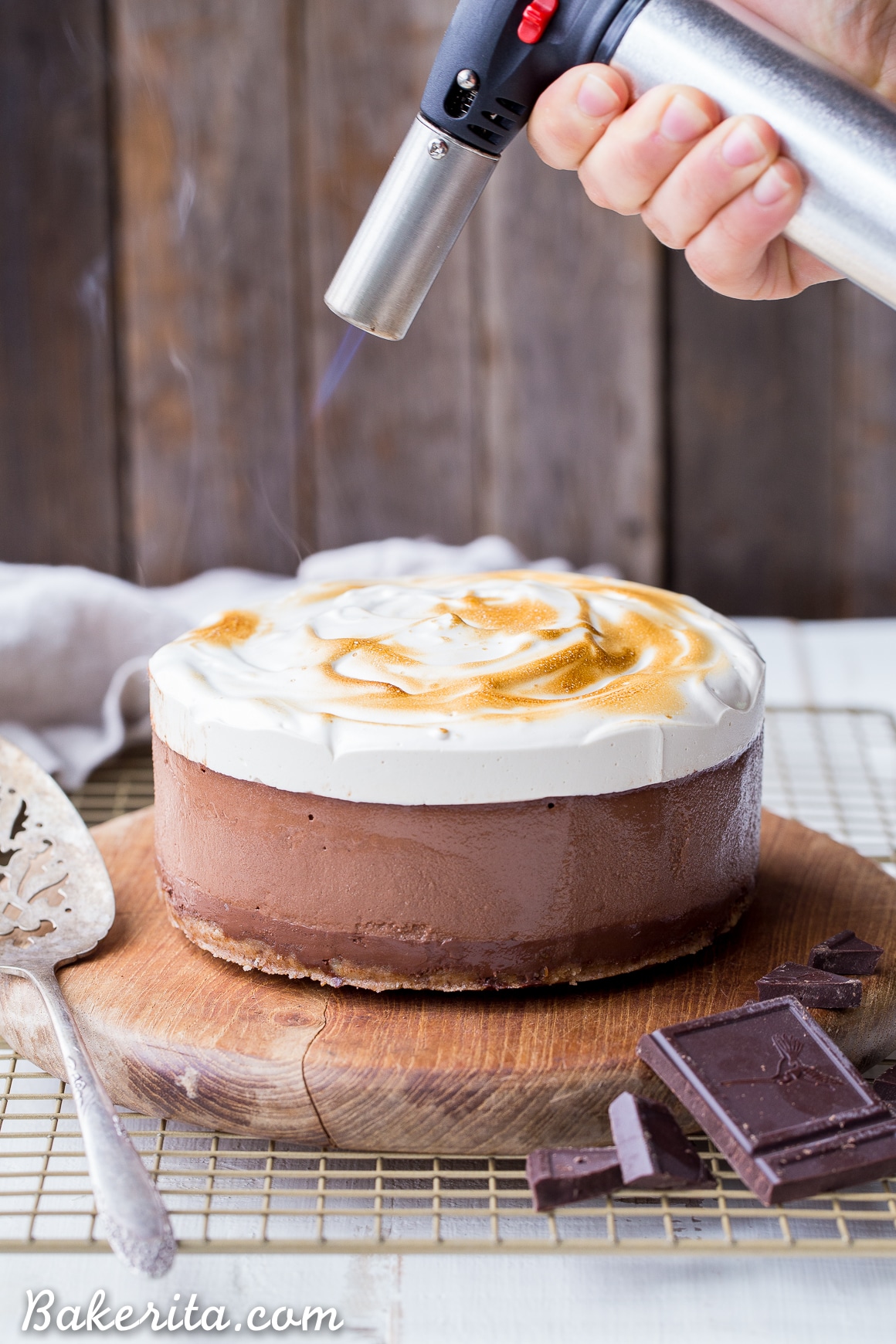 And then, as each step was completed, looking just the way I wanted, I breathed out a little sigh of relief. As I made the marshmallow, the final step and the one I was most worried about, I kept doubting myself. Did I add enough gelatin? Will it set up, or am I going to take off the sides of the springform pan and have the whole thing spill down the sides and fall apart?

As I wiggled off the pan and saw smooth sides and a perfect marshmallow layer, I realized I was worrying for no reason. I’ve been trying to argue against my worries lately, because usually, my worries never come to be. Instead of focusing on negative what-ifs, I’m trying to transition my thinking into channeling positive results. 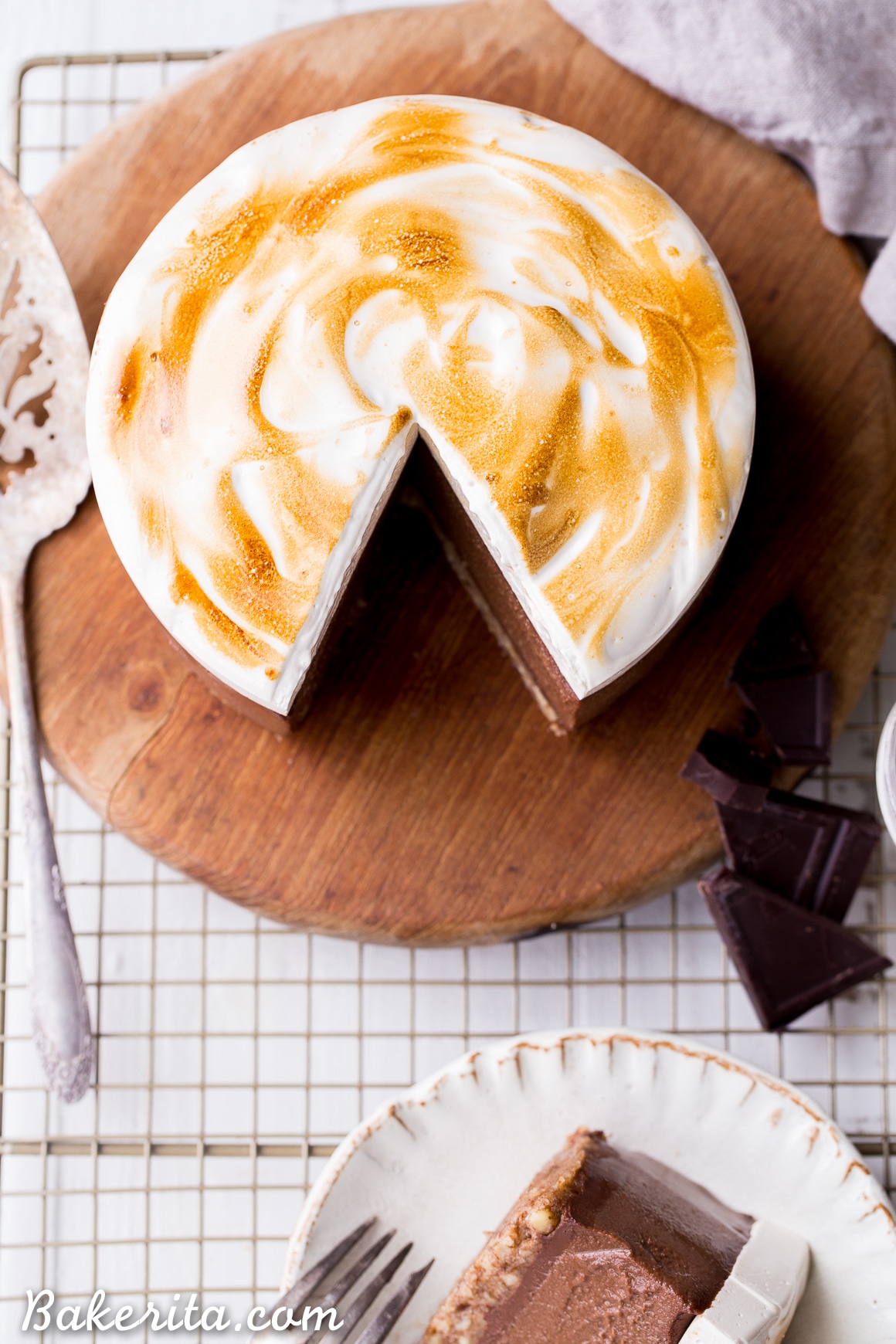 I’ve realized that usually, when I’m worrying, instead of mitigating the possibility, I’m stoking it’s fire, and giving it the energy it needs to come to be. By ignoring possible negative outcomes, I’m able to give credence to the positive outcomes that I’m after.

Now, thankfully, all my worries didn’t come to be in this S’mores Cheesecake. Instead, it turned out spectacularly, encompassing all the glorious flavors of s’mores I was after. 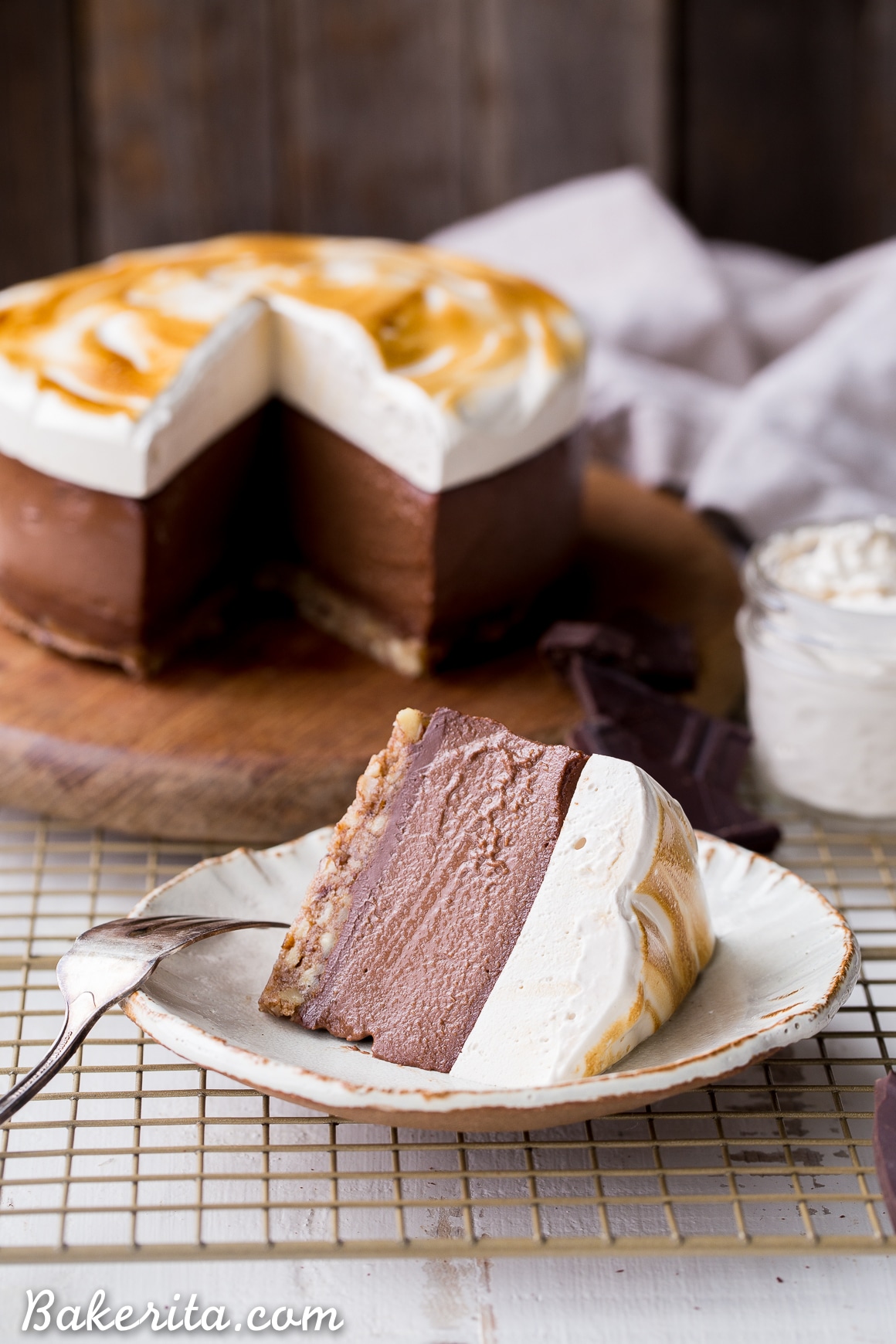 This S’mores Cheesecake is not your typical cheesecake; instead, it’s completely gluten-free, dairy-free, refined sugar-free, and Paleo-friendly. It starts with a crust that, although completely graham cracker free, gives the flavor profile we’re after. It’s barely sweetened with dates, and loaded with cinnamon for that graham cracker flavor.

A layer of chocolate ganache is spread on top of the crust. The filling is cashew-based and turns out incredibly creamy after a long blend in a high-powered blender or food processor. It’s lightly sweetened with maple syrup and loaded up with melted dark chocolate, which gives that rich, deep chocolate flavor. 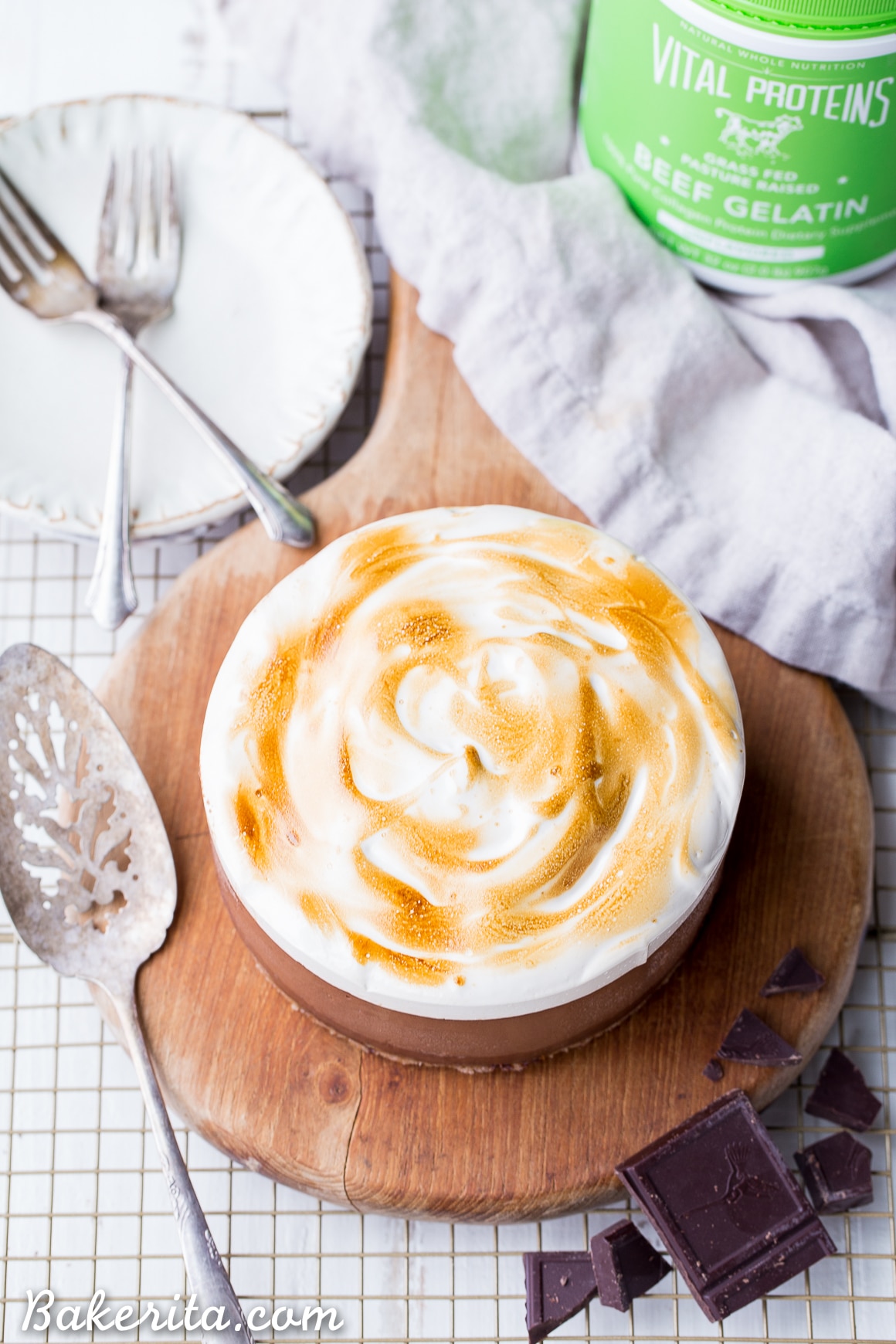 And finally, that glorious marshmallow topping! This is the most difficult part of the process, for sure, but it’s still relatively simple to do – you just need to be paying attention to the temperature and make sure everything is well-greased so you don’t have a sticky mess! The marshmallows are made with Vital Proteins gelatin, which is my favorite because it’s grass-fed and amaaazing for your joints, skin, hair, nails, and gut health.

Once you’ve got your marshmallow piled on top of the chocolate cheesecake, let it set, remove the ring of the springform pan, and toast the top with a kitchen torch to get it nice and toasty. Because it can’t really be s’mores without a toasted marshmallow! 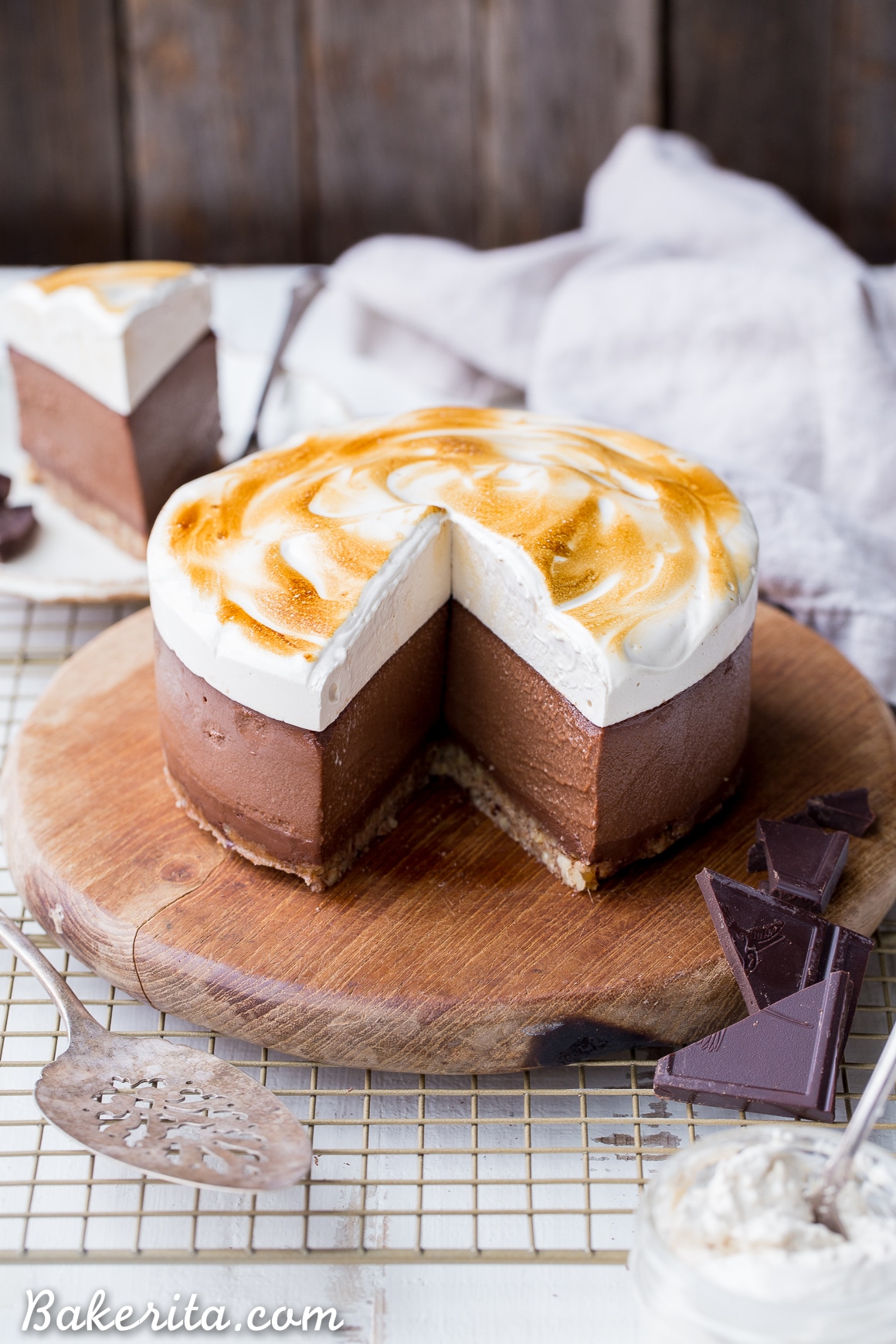 Once it’s ready, slice it up and serve! I bet no one would EVER guess this guy is Paleo, especially with that thick layer of fluffy marshmallow. It’s s’mores heaven – I’m telling you. Hope you’ll give it a try! Enjoy :)

This No Bake S’mores Cheesecake has a graham cracker flavored crust topped with chocolate ganache, rich chocolate “cheesecake” made with soaked cashews, and a layer of homemade toasted marshmallow on top! You’d never guess this decadent dessert is gluten-free, dairy-free, and Paleo.

For the marshmallow topping

Prep time does not include chilling of the cheesecake between layers being added.

Because gelatin is used, this recipe is not vegan. Agar agar may be substituted for the gelatin as a vegan alternative, but I haven’t tried it so I can’t make any guarantees.

This post is sponsored by Vital Proteins. Thanks for supporting the brands that support Bakerita!