This easy Chocolate Chunk Banana Baked Oatmeal is a delicious twist on classic oatmeal – you’ll definitely want to start your day with a serving of this gluten-free + vegan breakfast! This healthier oatmeal has no added sweetener; it’s sweetened entirely with ripe banana and chocolate chunks. 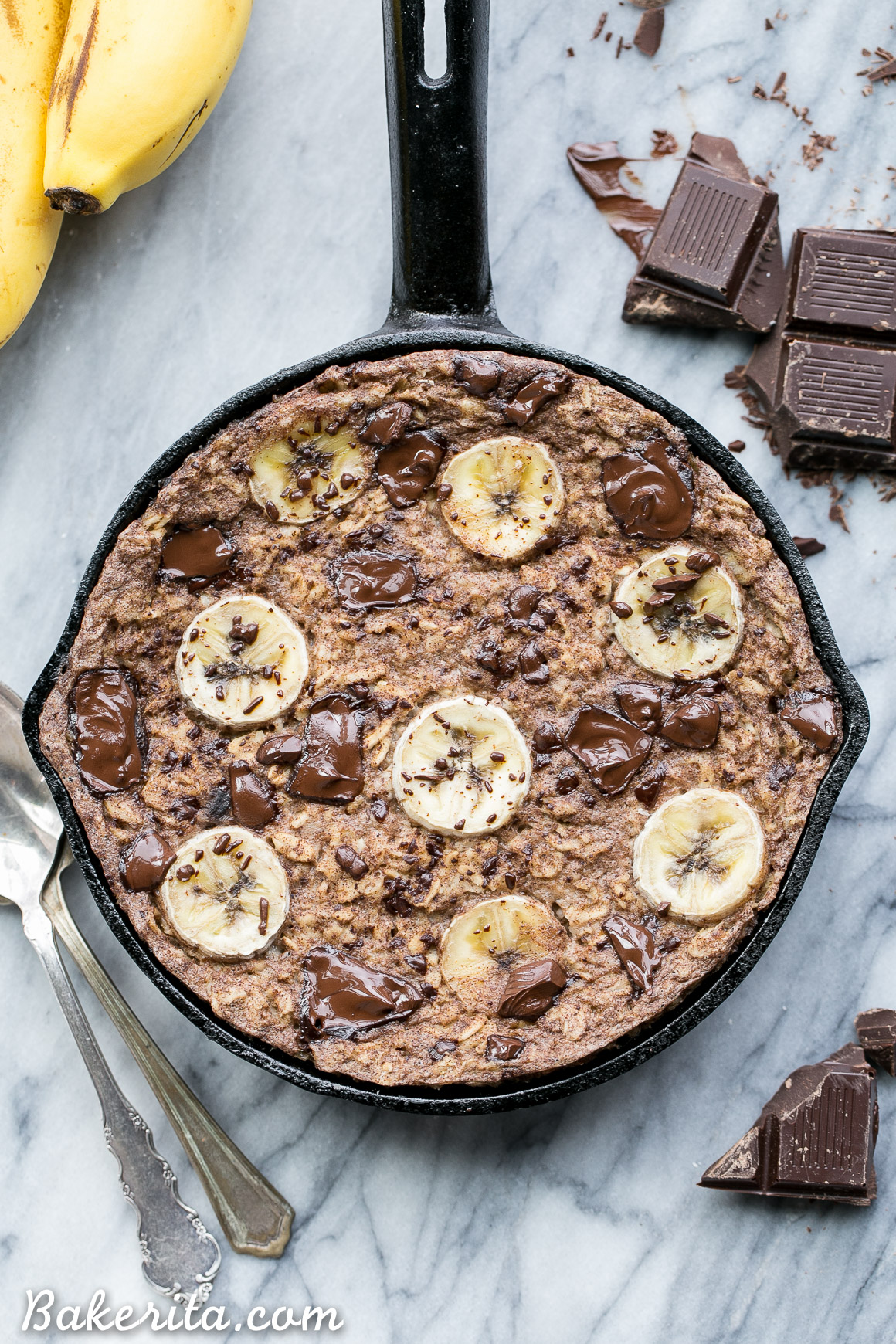 this recipe
For all the oatmeal I eat, baked oatmeal isn’t something that I’ve made too often. To be honest, it’s a method of preparing it that I often forget about…but now that I’ve rediscovered baked oatmeal, with it’s fluffy center and crispy edges, it’s here to stay.

If you’ve never tried baked oatmeal before, you’re going to want to listen up. Baked oatmeal is similar to traditional oatmeal, but it’s made with a few extra ingredients to help it get puffy and browned, and piled into a dish to bake instead of simmering away on the stove. 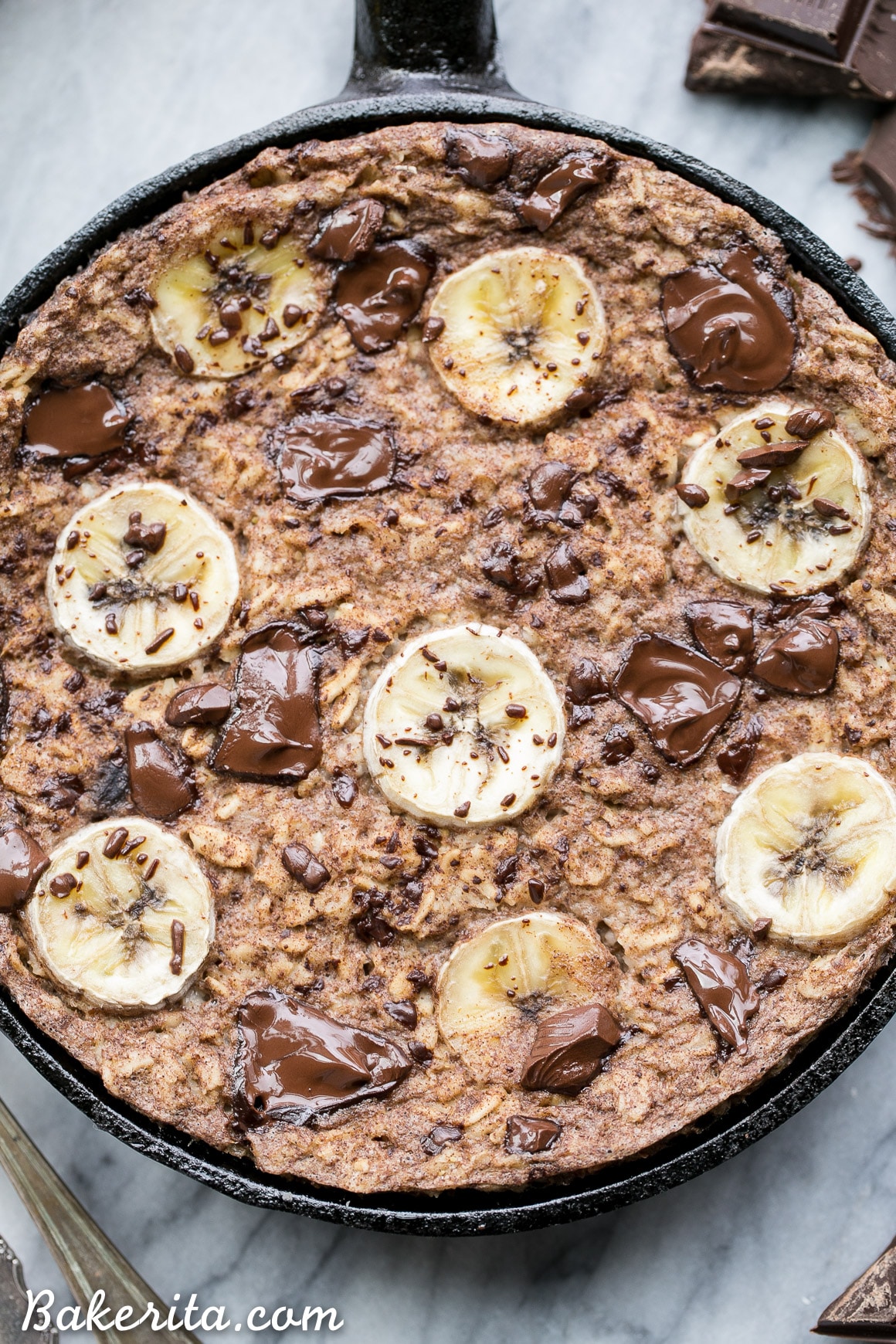 The result is an oatmeal breakfast that’s incredibly delicious and more hands off than oatmeal made on the stovetop. In addition to the usual rolled oats and milk needed for oatmeal, a flax egg is also stirred in as well as some baking powder, to help give the oatmeal a little lift.

This chocolate chunk banana version also has a touch of cinnamon, some coconut oil for richness, a splash of vanilla extract, dark chocolate chunks, and ripe mashed banana, to help sweeten. 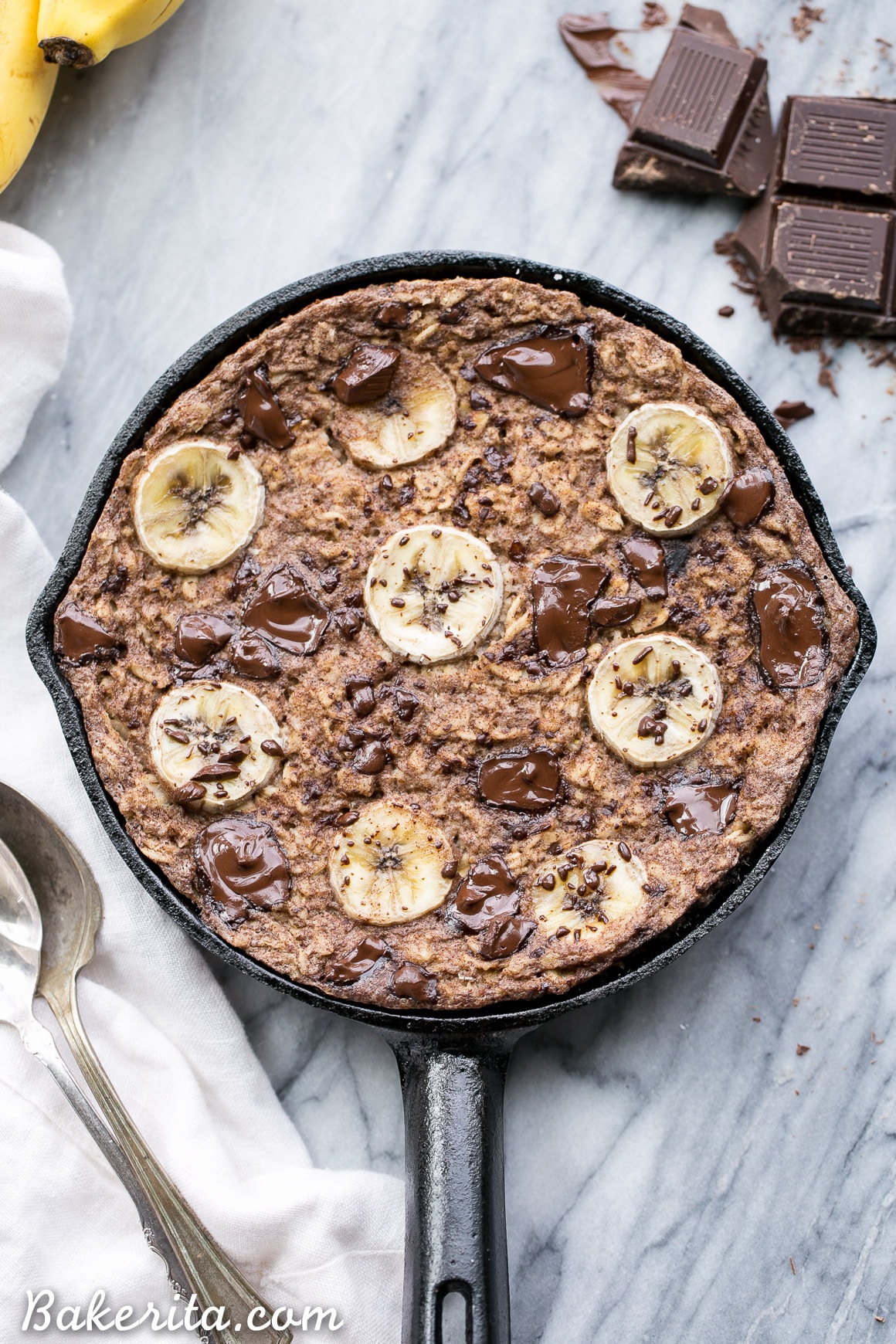 Besides that ripe banana and the chocolate chunks, there’s no sugar added, and I definitely found it to be plenty sweet enough. If you have more of a sweet tooth, you can stir in a tablespoon of maple syrup before baking, or drizzle a little over the top after it’s baked.

I also sliced up a banana and baked some of the slices on top – it both looks pretty and adds texture to the oats. As they bake up, the oats absorb the liquid, puff up, and get brown around the edges. Between the crispy edges, melted chocolate, and gooey center, you’ll have a hard time resisting. 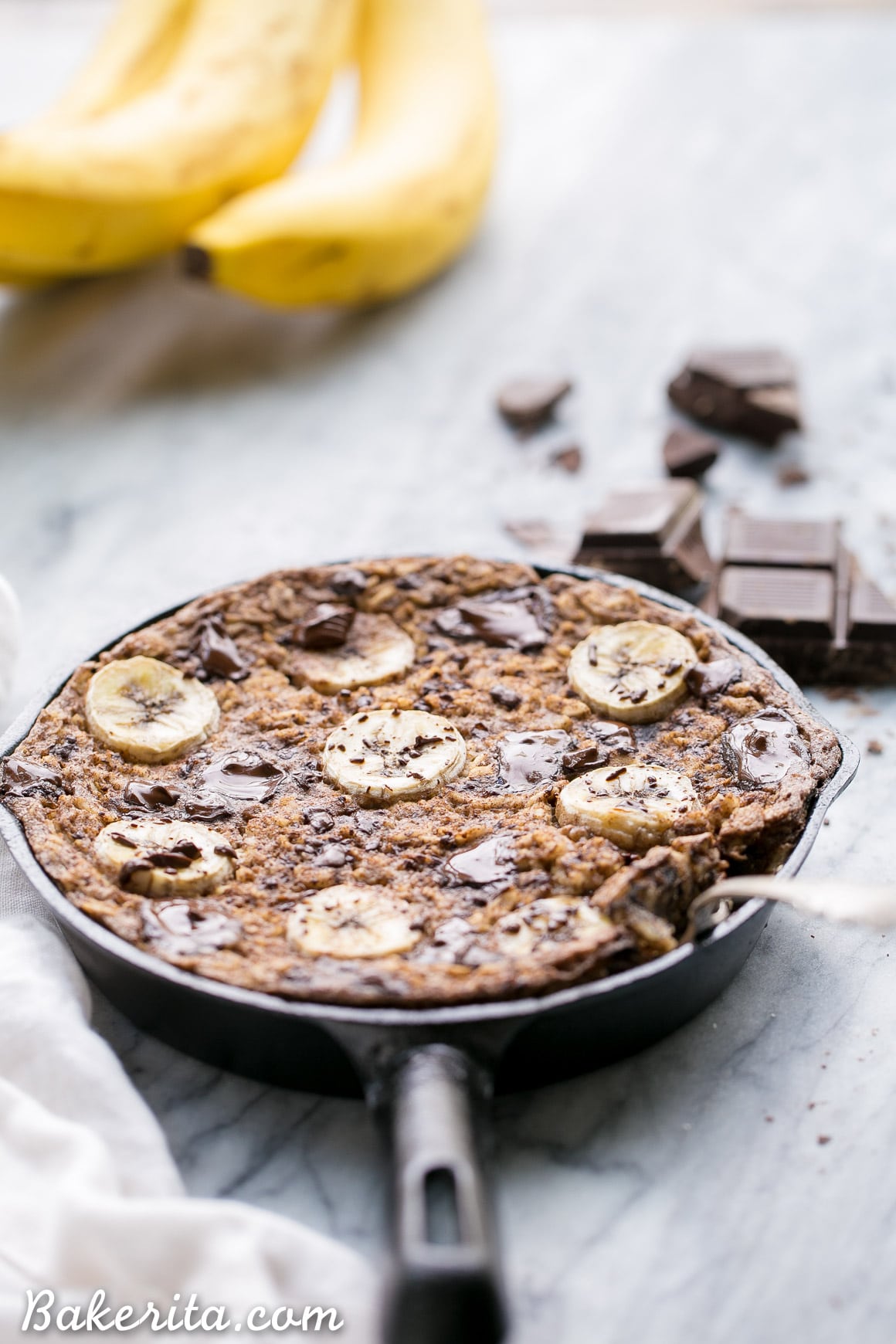 I opted for to make one big baked oatmeal in my 6-inch cast iron skillet, but you can also divide it between three ramekins – that way, each person can have their own OR you can save them to reheat for breakfast later in the week.

This is such an easy breakfast treat, and can be so versatile too! I hope you all love this one – it was so requested on Instagram that I just HAD to share. More baked oatmeal variations coming your way soon ;) enjoy! 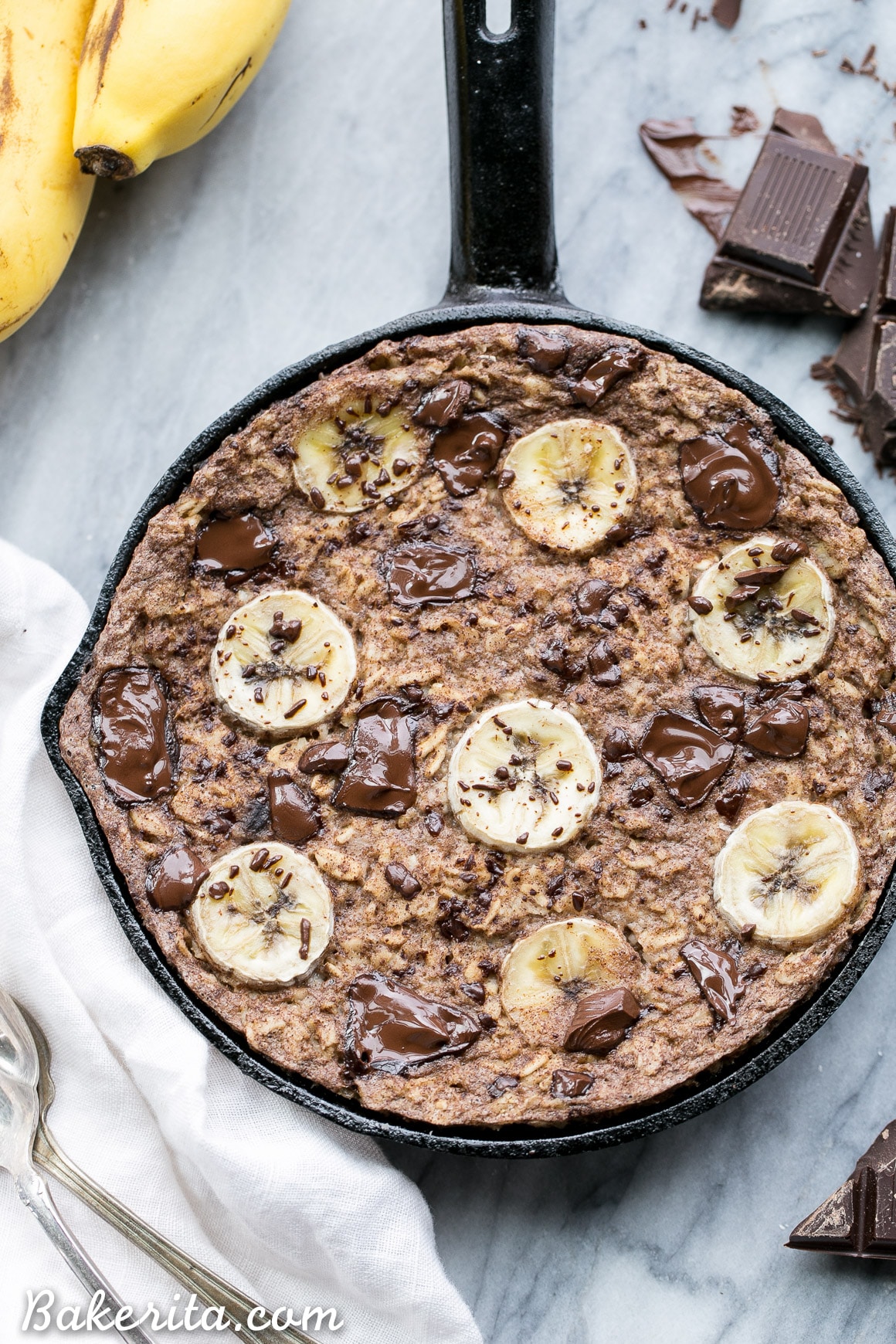