This Paleo Cherry Crisp has an irresistible grain-free crumble topping that will have your spoon diving in for more! It’s a sweet and flavorful gluten-free and vegan dessert that can be enjoyed all year round. 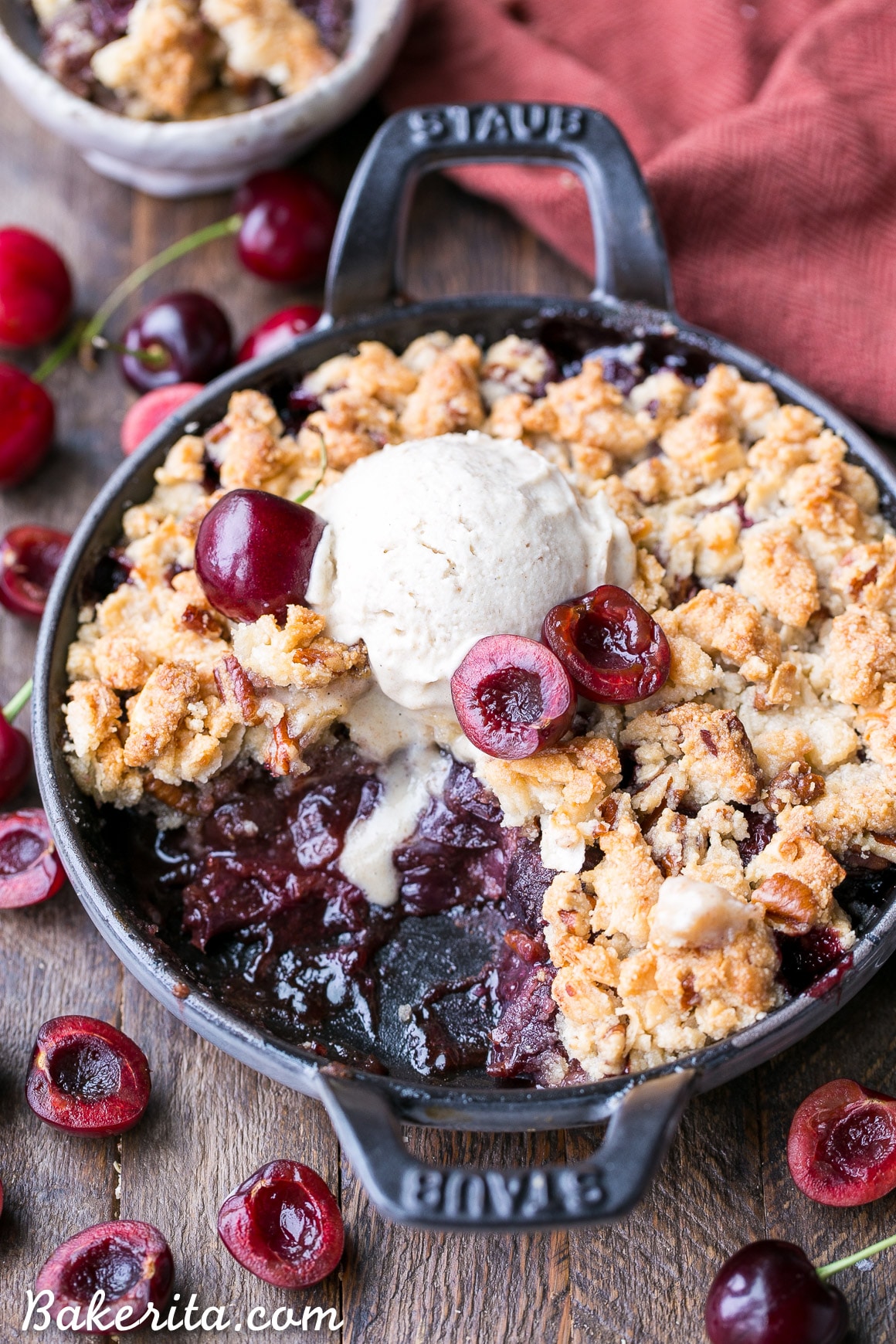 Cherry season always comes and goes in the blink of an eye. Just a few weeks ago I was getting my hands on the first of the year’s cherry’s…

And then last week at the farmer’s market, they’re hawking that this week is the last week for locally grown cherries. So sad, but you can bet I’ve been stocking up and giving the cherries the love they deserve. 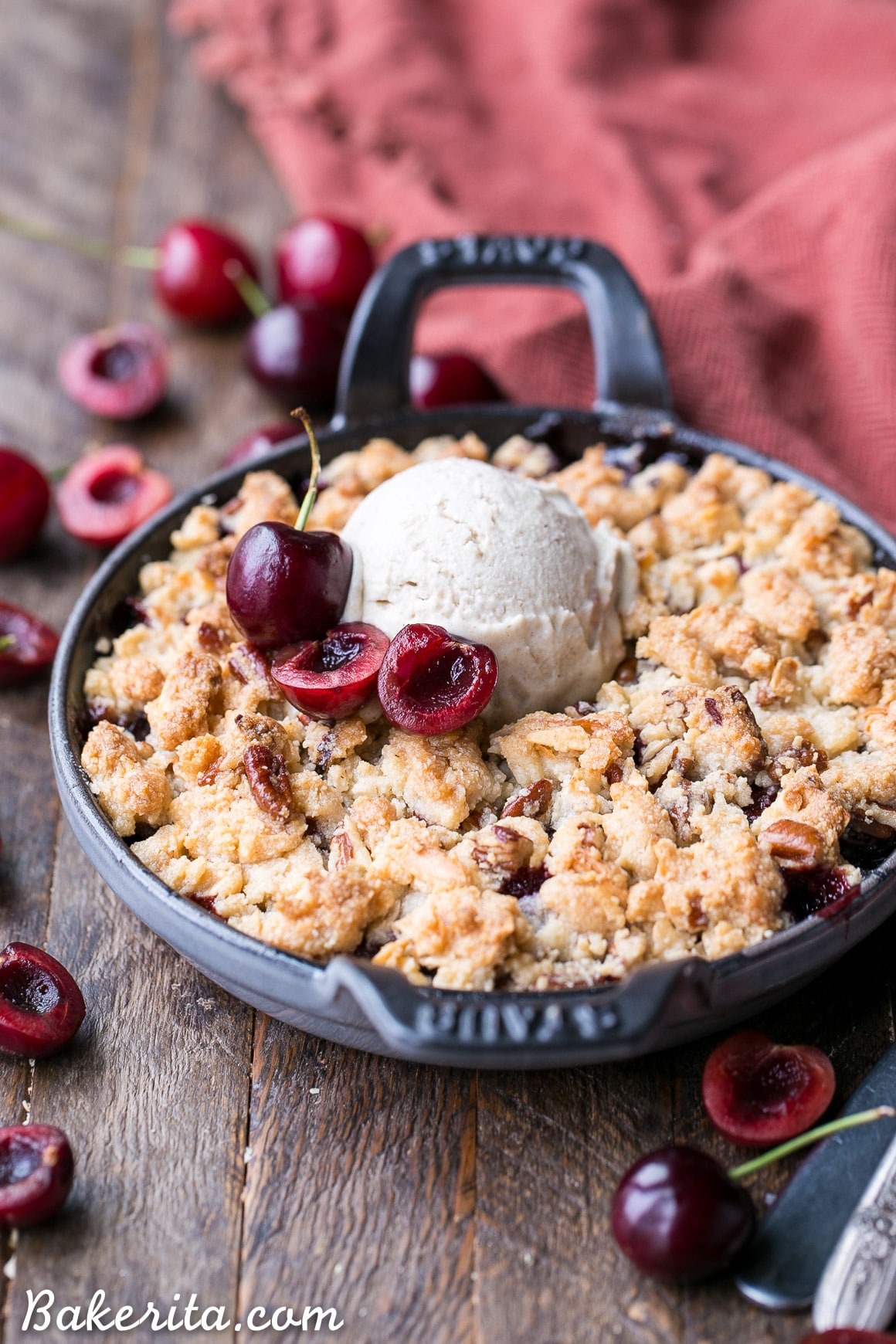 At the beginning of this cherry season, my boyfriend claimed to not like cherries. The way he demolished part of this cherry crisp would say otherwise, though! My guess is that he never really had fresh, firm farmer’s market cherries. A lot of people’s cherry dessert experiences bring to mind sugary, brightly-colored cherry gloop.

I never enjoyed those overly sweetened cherry pies either – the cherry flavor becomes artificial tasting, and you lose the true cherry flavor. Not in this crisp though! 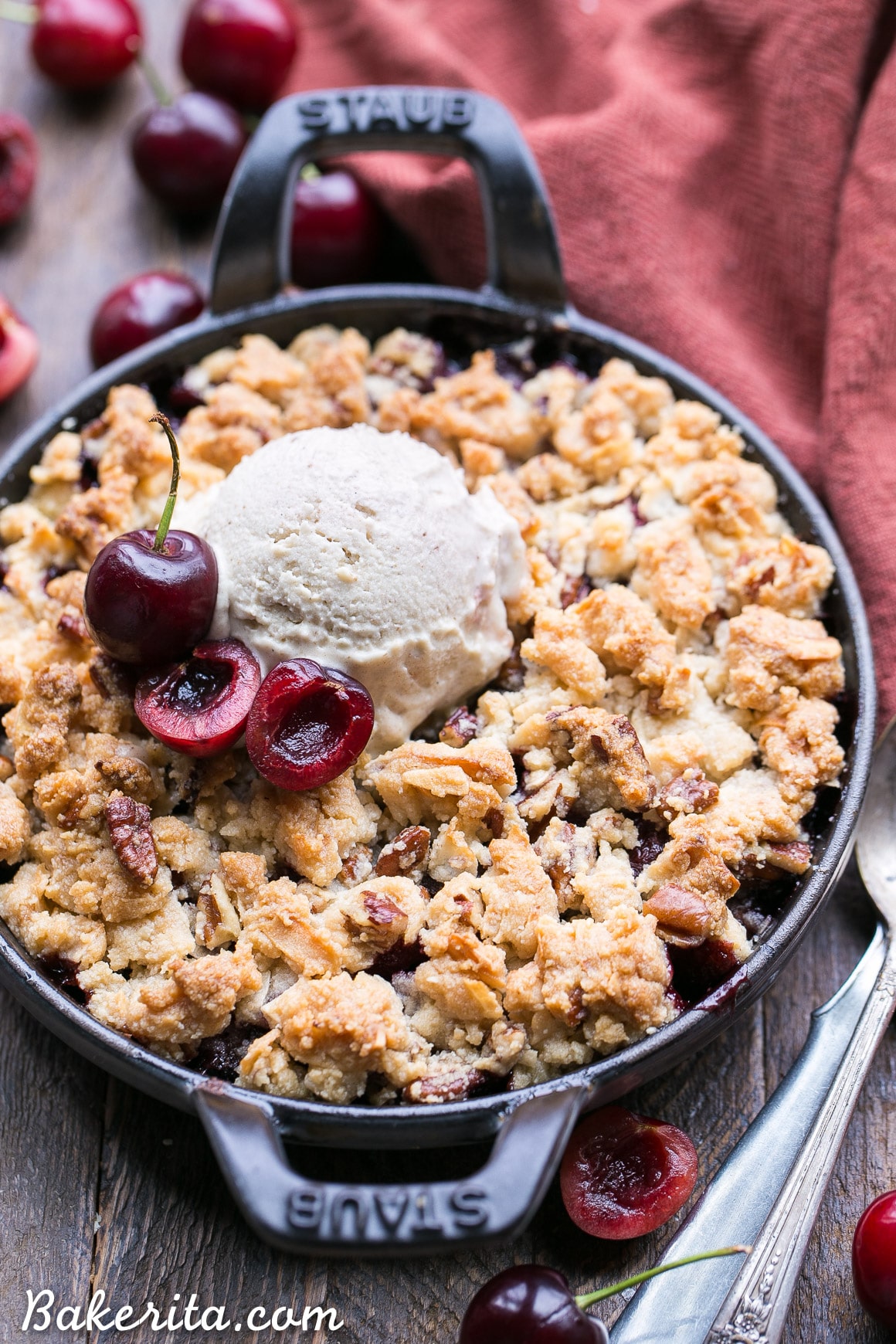 We sweeten the cherries just barely, with just a tablespoon of maple syrup. By not over-sweetening, the inherent sweetness and richness of the cherries can shine. A hint of cinnamon brings out that rich flavor without adding a bold cinnamon flavor – it’s just a little something something ;)

For the crumble, we replicate the texture you get in an oat-filled crumble, but without the oats to keep the recipe paleo. To replace the texture of the oats, I turned to flaked coconut – and I was super pleased with the turnout. I chopped the flaked coconut it’s smaller, oat-sized bits and the texture turned out super similar to an oat-y crumble topping. 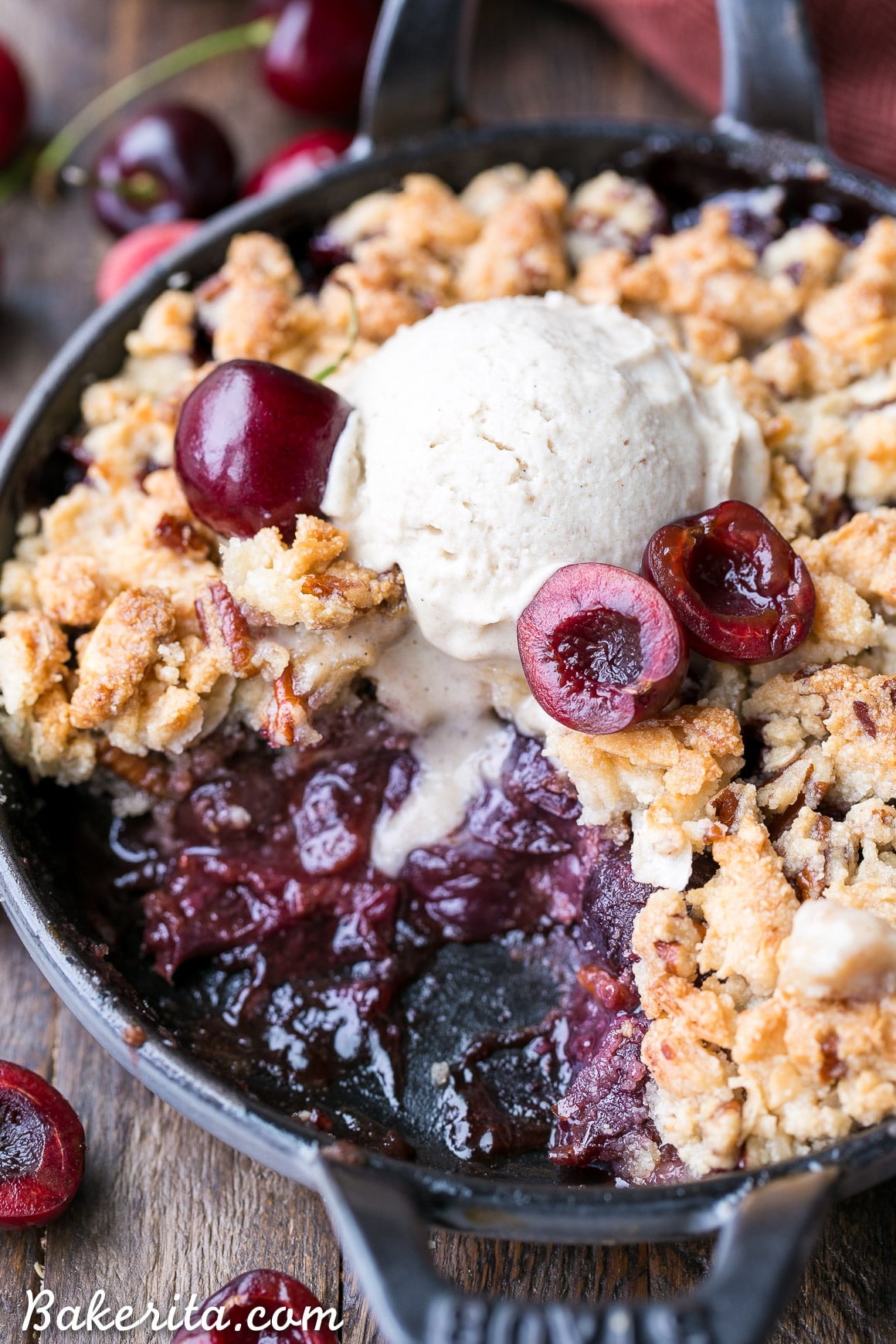 I didn’t find the flavor to be overwhelmingly coconutty. But if you hate coconut, you might want to sub sliced almonds or oats instead! We make the rest of the crumble topping out of almond flour, maple syrup, coconut oil, and some chopped pecans for extra crunch.

The crumbly topping comes together super quickly and easily. The hardest part of the whole crisp is pitting and slicing the cherries – I thank the OXO people every time I need to pit cherries for their cherry pitter (not sponsored, I just always use this thing for cherries – it is an affiliate link though!). If you’re wanting this out of cherry season, just use frozen cherries instead…and eliminate the hardest step. 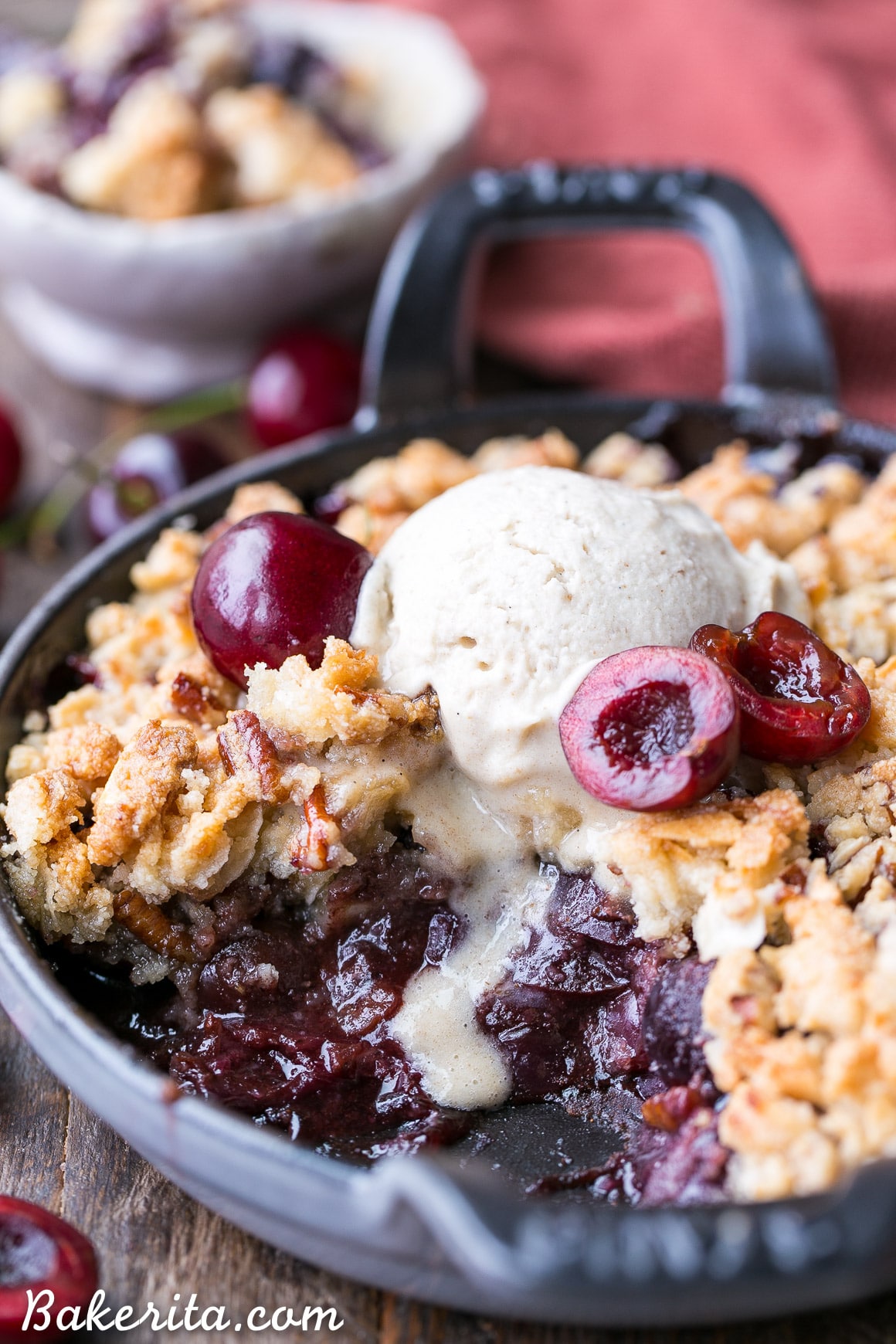 After it bakes enough to have bubbling fruit and a golden brown crisp, you’re ready to devour. Add a scoop of paleo vegan ice cream, or whipped coconut cream, for maximum impact, and enjoy! :) You’re going to love this one.

Feeling the cherry love?! You need to try these cherry-filled treats… 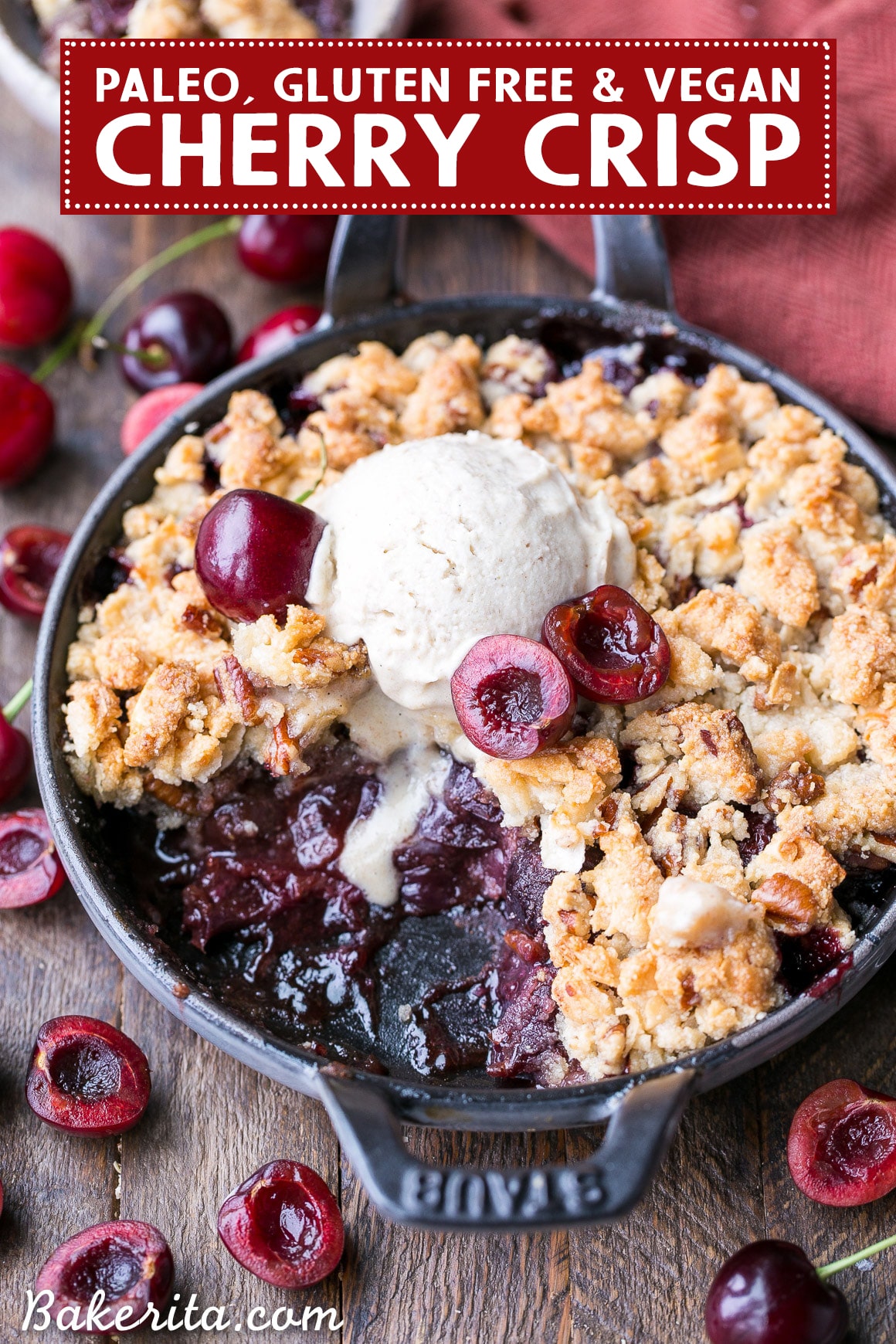