This Peach Raspberry Galette highlights two of summer’s best fruits. The fresh peaches and raspberries are tucked into the flakiest paleo and vegan pie crust I’ve ever had! 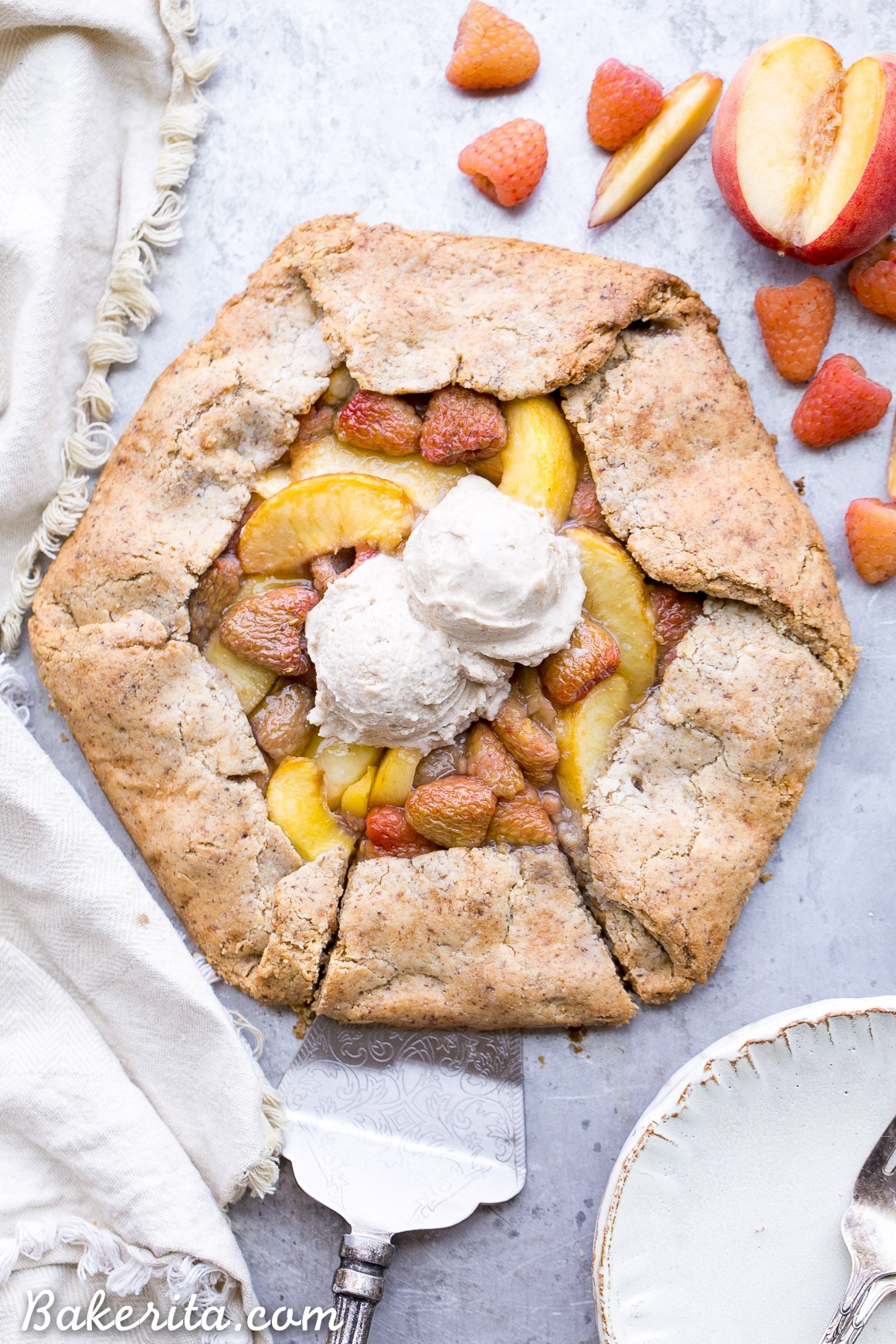 I had a vision for this galette that didn’t go as planned. I wanted the peach slices to be gorgeously arranged, forming concentric circles so they’d appear like a rose of sorts, with golden pink raspberries adorning the juicy, peachy flower.

Unfortunately, my peaches were finicky farmer’s market peaches, and not willing to go along with my plan. The pits would NOT come out, so I had to carve the peach slices out around the pit, making for much less than pretty slices. More like hacked up slices. 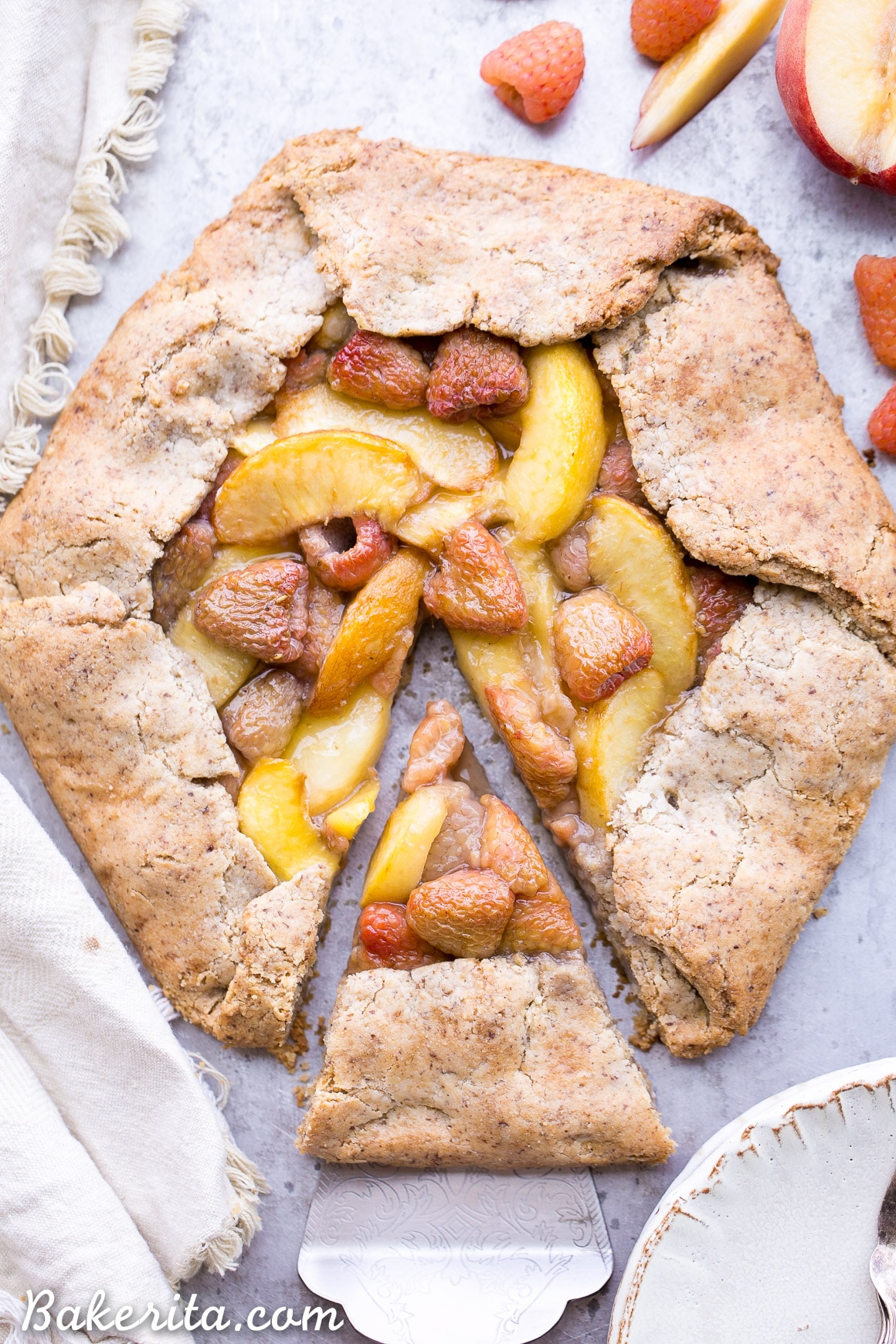 So instead of being beautifully arranged, they got tossed up with the raspberries, a touch of maple syrup, a little bit of tapioca starch to keep the juices from running everywhere, and a little bit of vanilla extract.

The filling is simple, but when you’re working with farmer’s market fresh, peak-of-the-season peaches and raspberries, they don’t need much adornment to be absolutely delicious. 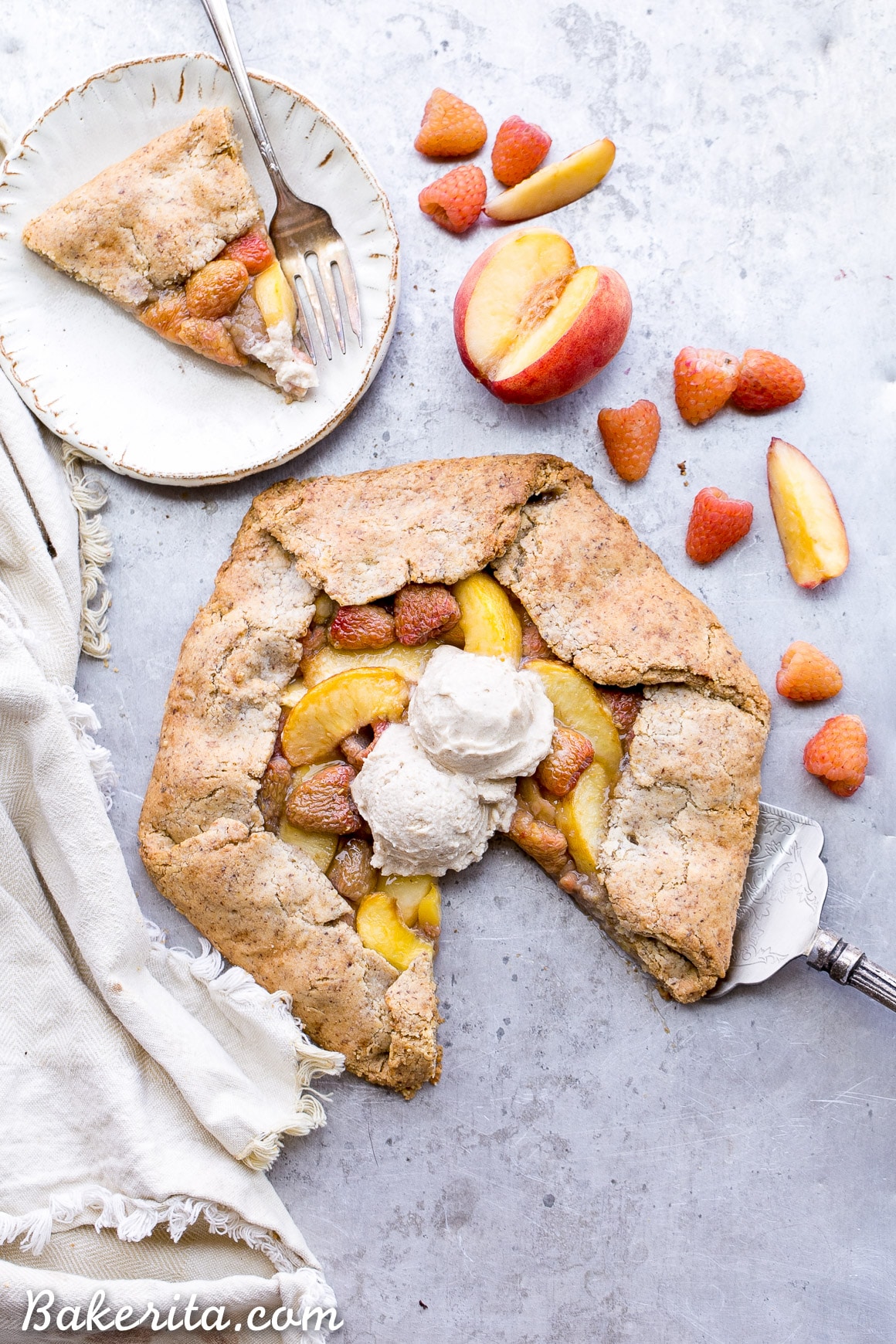 They do need a scrumptious, flaky crust to be tucked into though, for maximum deliciousness. The crust I’ve used for my other galettes, like this Chocolate Strawberry Galette, is a major favorite – it’s so flaky and absolutely delicious, but also not vegan. For this guy, I was determined to make a vegan crust.

Luckily, it didn’t take too much adapting from my normal recipe, just some flax meal added to help things stick together, a little water for the liquid, and coconut oil to replace the butter. The coconut oil needs to be in a solid state, so you may need to put it in the fridge for a little while to firm it up if you live in a warm climate. 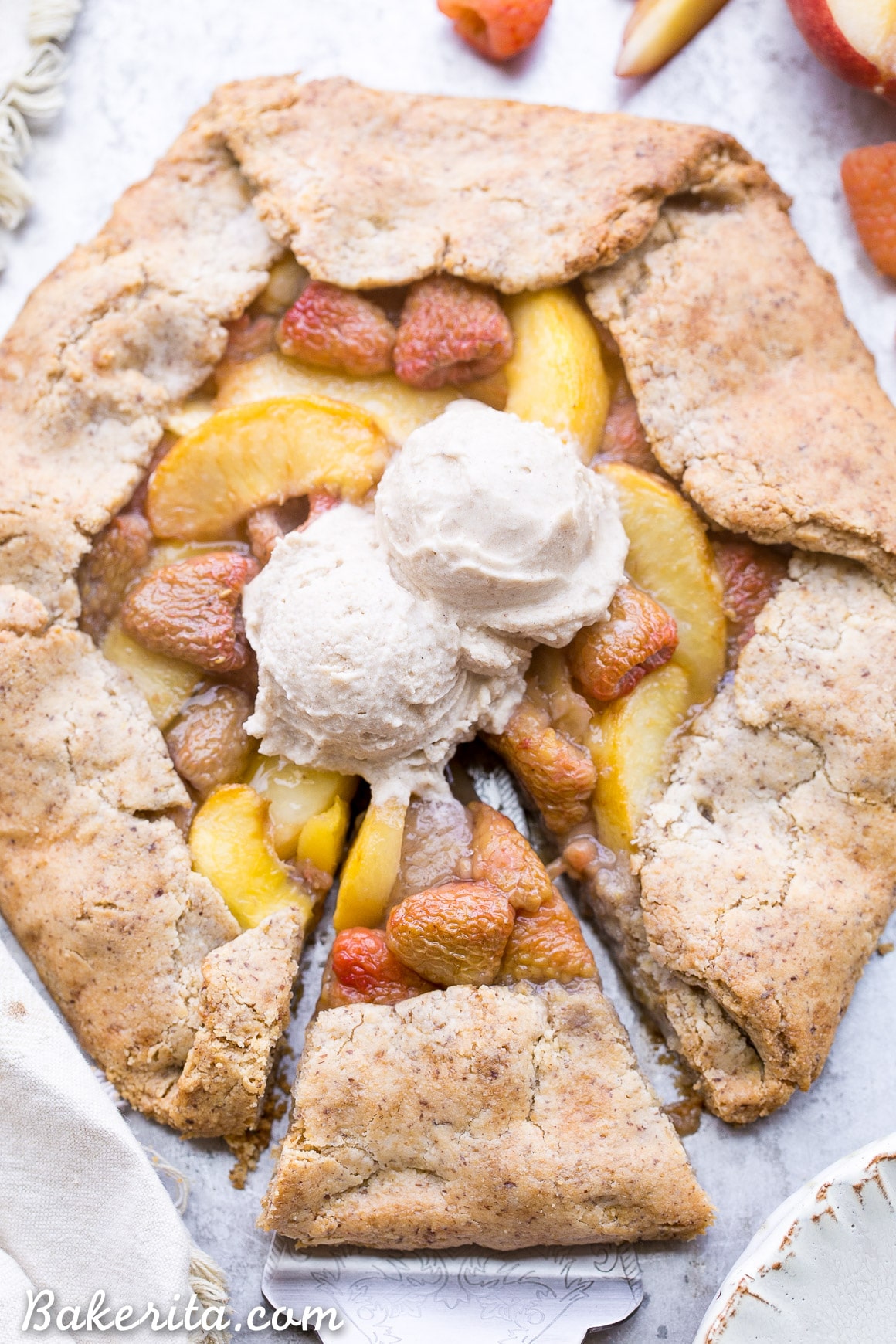 The crust can be rolled out immediately too, which is a bonus compared to most butter-based crusts, which do better after being chilled for a while. If you crust is too soft though, or you’re in a warm kitchen, you can stick it in the fridge for 30 minutes to an hour to make it easier to work with.

Once the peaches and raspberries are nestled into the galette dough, the crust is brushed with some non-dairy milk to help it get nice and golden brown, and then off to the oven to get crispy, jammy, and delicious. 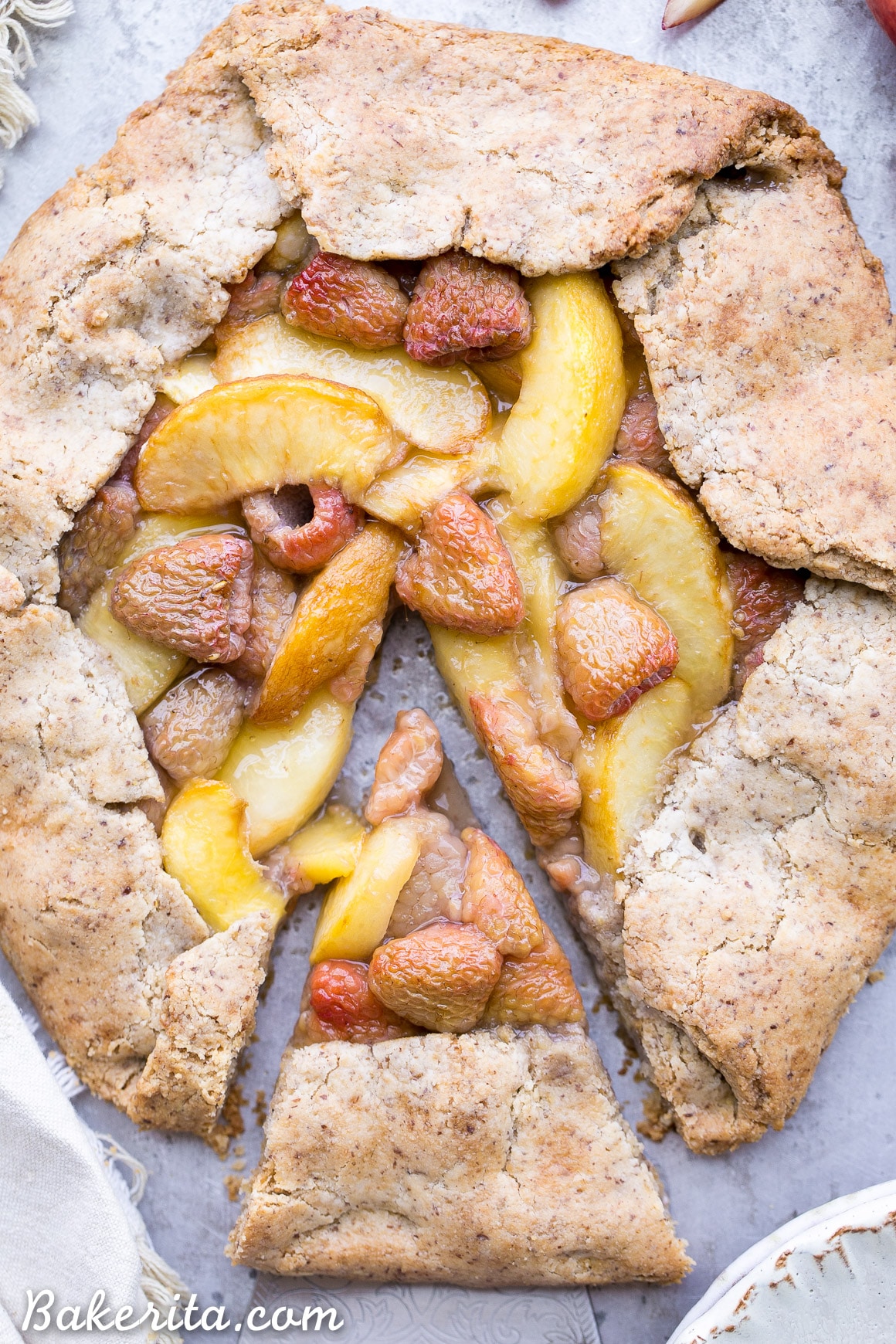 I topped off my slice with a scoop of paleo + vegan ice cream (working on the recipe – it’ll be posted soon!) and it was pure heaven. The grain-free and vegan crust gets super crisp and flaky, and the fruit bakes down to be even sweeter and more flavorful. Together, especially with the ice cream, it’s a match made in heaven. Enjoy! 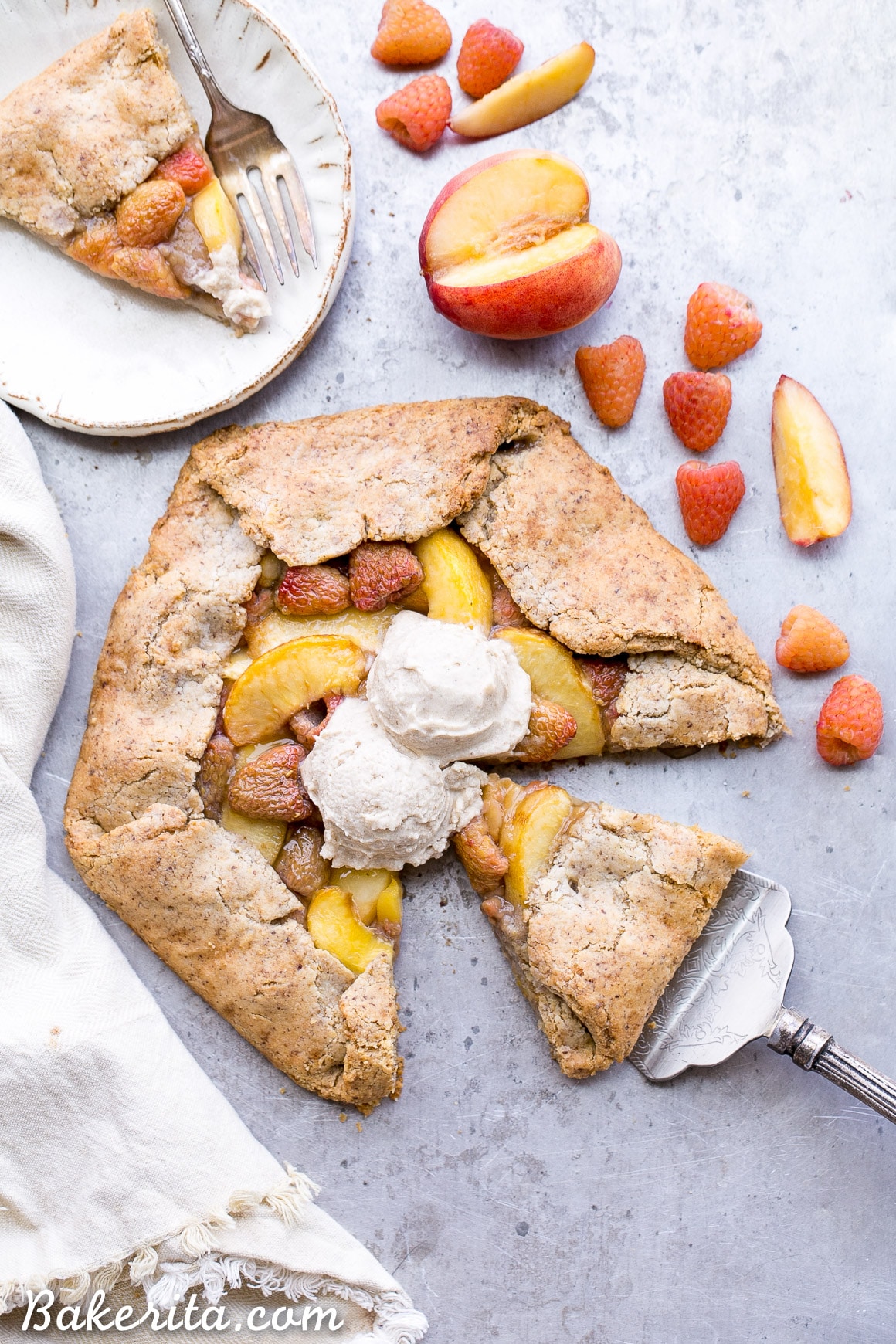 Feeling the galette love?! You’ll go nuts for these other galettes…

What you’ll need to make this…