This Caramel Pear Crisp is a decadent and deliciously spiced dessert that’s perfect for the holidays. The caramel pear filling is spiced with cinnamon, cardamom, cloves, and vanilla bean, and topped with a crunchy almond flour and pecan crisp topping. Don’t forget to serve this gluten-free, paleo, and vegan crisp with some whipped coconut cream! 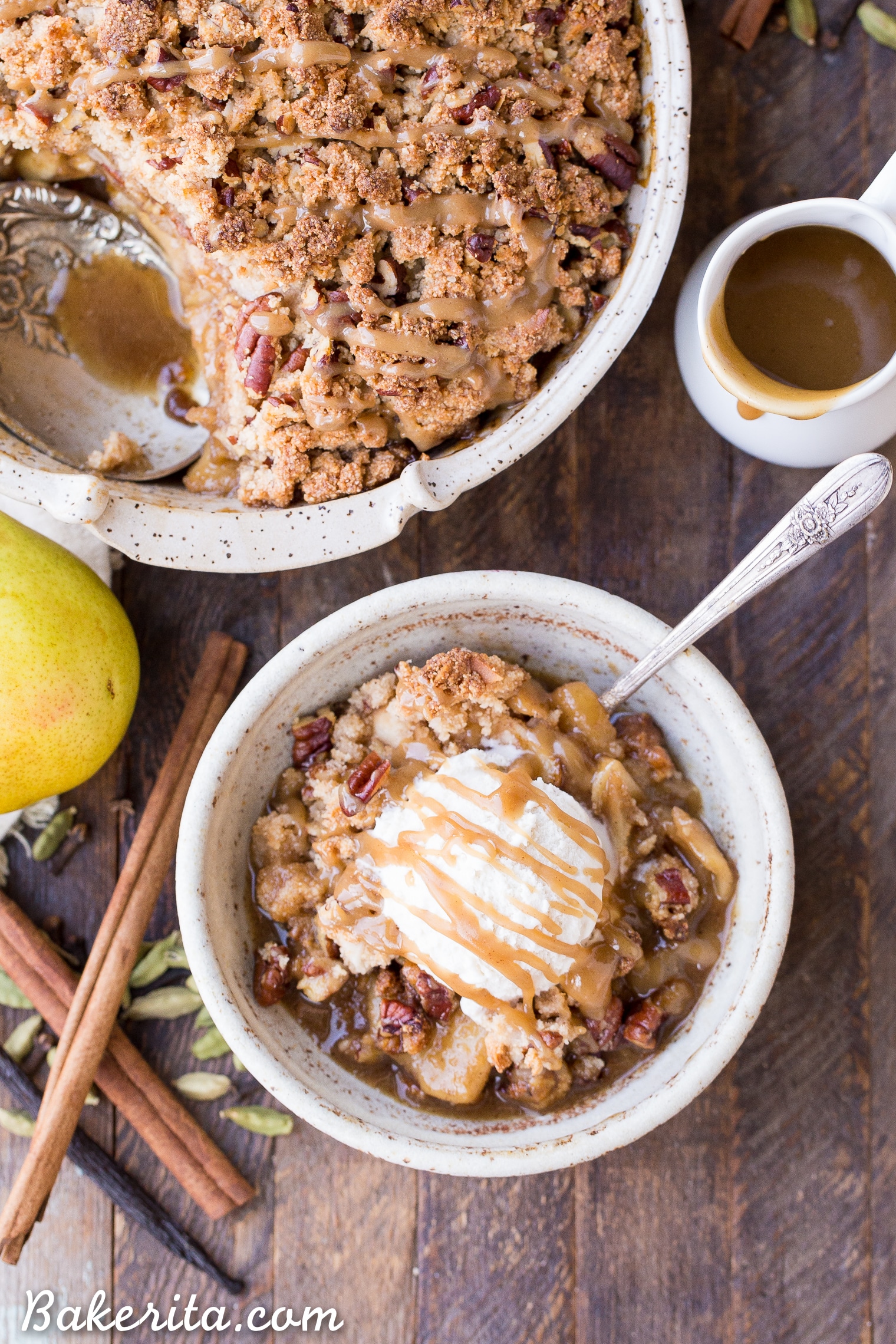 Hi friends! How’s the Thanksgiving planning going, since we’re only two days out from the big day?! I’m still reeling with how fast this year has gone by, and I’ve barely planned a thing for my family’s Thanksgiving festivities.

Thankfully for me, I’m a little off the hook this year. Normally, I end up in charge with at least all the dessert and a few sides. But, this year, my sister and I are splitting our time between my dad’s family and my mom’s family. That means I just need to make sure there are some GF + vegan treats for the two of us. 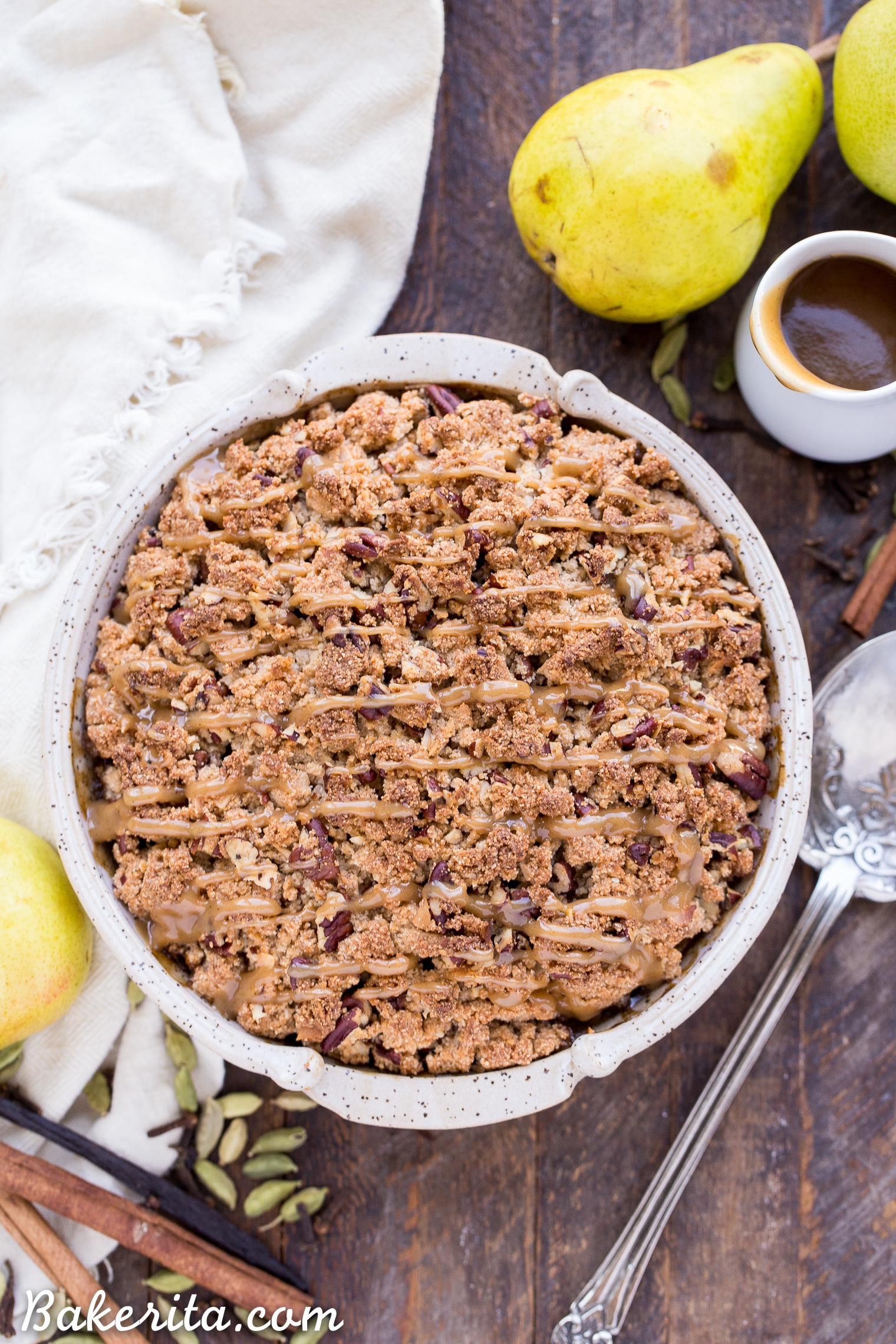 One thing is for sure though: this Caramel Pear Crisp is definitely on the menu for us. I developed the recipe this past weekend for my own Thanksgiving meal. Upon tasting it, I decided I needed to get it photographed and posted so you too could enjoy this goodness for your own holiday feast. :)

Apples get a lot of love this time of year, but pears, despite their delicious juiciness, tend to get left behind. I’m guilty of it too. SO, I decided to make pears the *star* of this dish and give them the love and attention that they deserve. 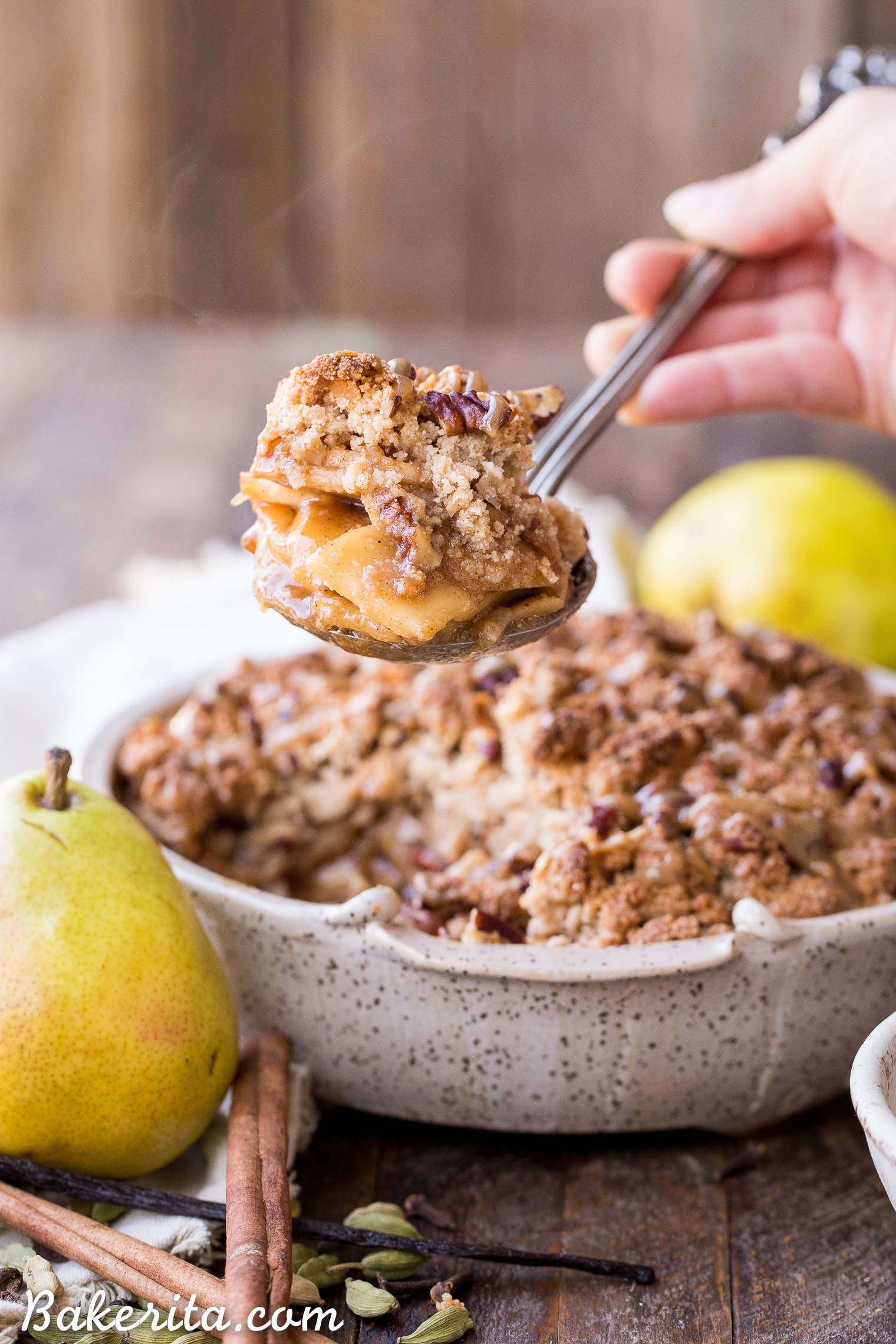 What kind of pears are best for this crisp?

I used a combo of Anjou and Bartlett pears for this crisp. This crisp is best with a variety of pears to get a variety of textures and flavors. I wanted to use a few Bosc pears for the firmness, but none were ripe at the store. Luckily, the two varieties I did use provide incredibly fresh flavor and an amazing texture. The Bartletts break down, creating a delicious sauciness in the crisp, while the Anjous retain their shape and some firmness.

You’ll make a quick caramel-like sauce to coat the pears in. You’ll sweeten it with maple syrup and coconut sugar, and spice it up with cinnamon, cloves, and cardamom. The warm, earthiness of the cloves along with the lemony cardamom and fragrant vanilla bean makes the perfect pairing here. Together, they complement the pear and caramel flavors wonderfully. 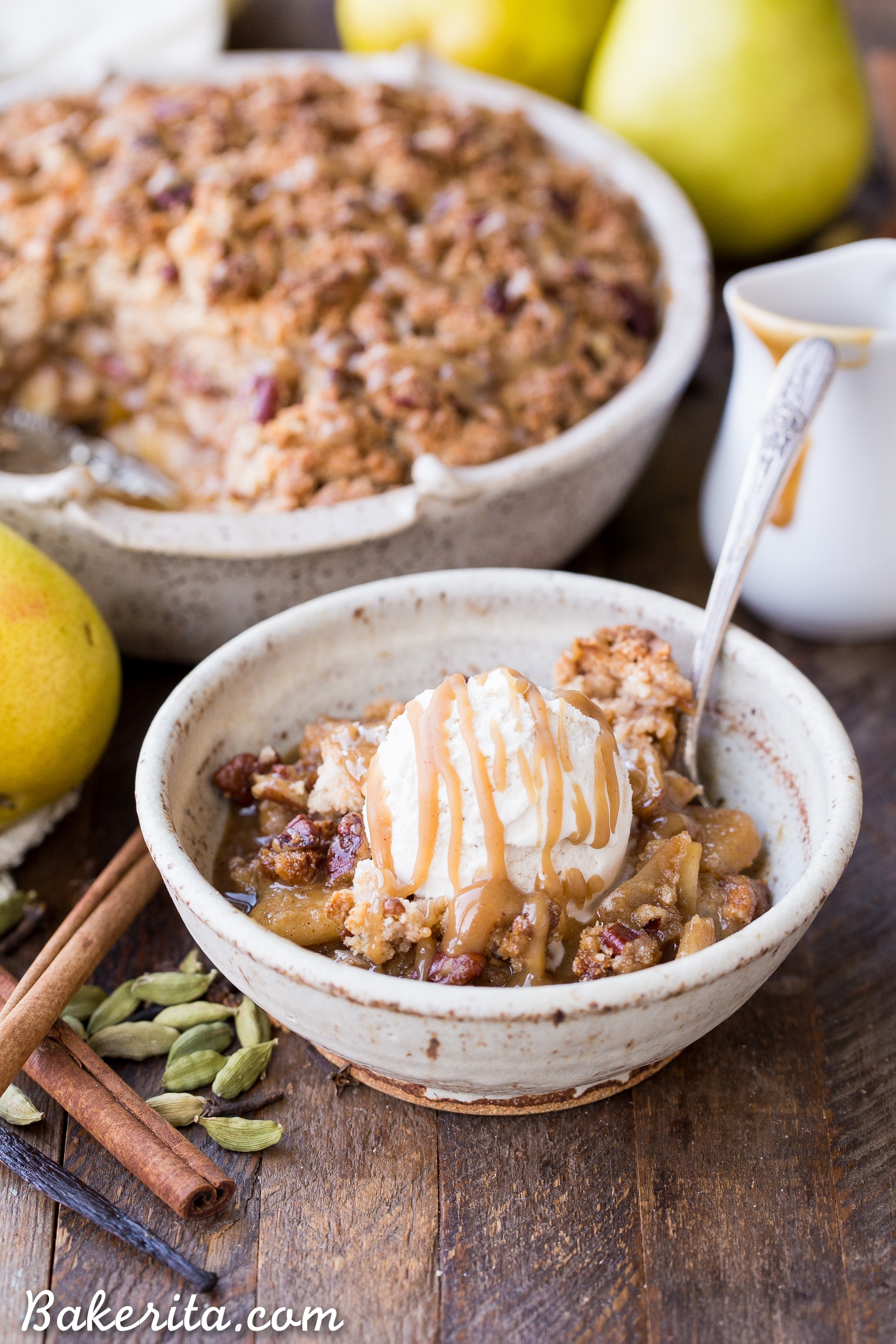 Once you’ve tossed the pears in the caramel sauce, you’ll pile them into a casserole dish and top them off with a paleo crumble topping. The crisp topping doesn’t use any oats. Instead, we use chopped flaked coconut to recreate the texture of the oats and pecans for nutty crunch.

You’ll bake it until golden and bubbling, and then it’s ready to serve! 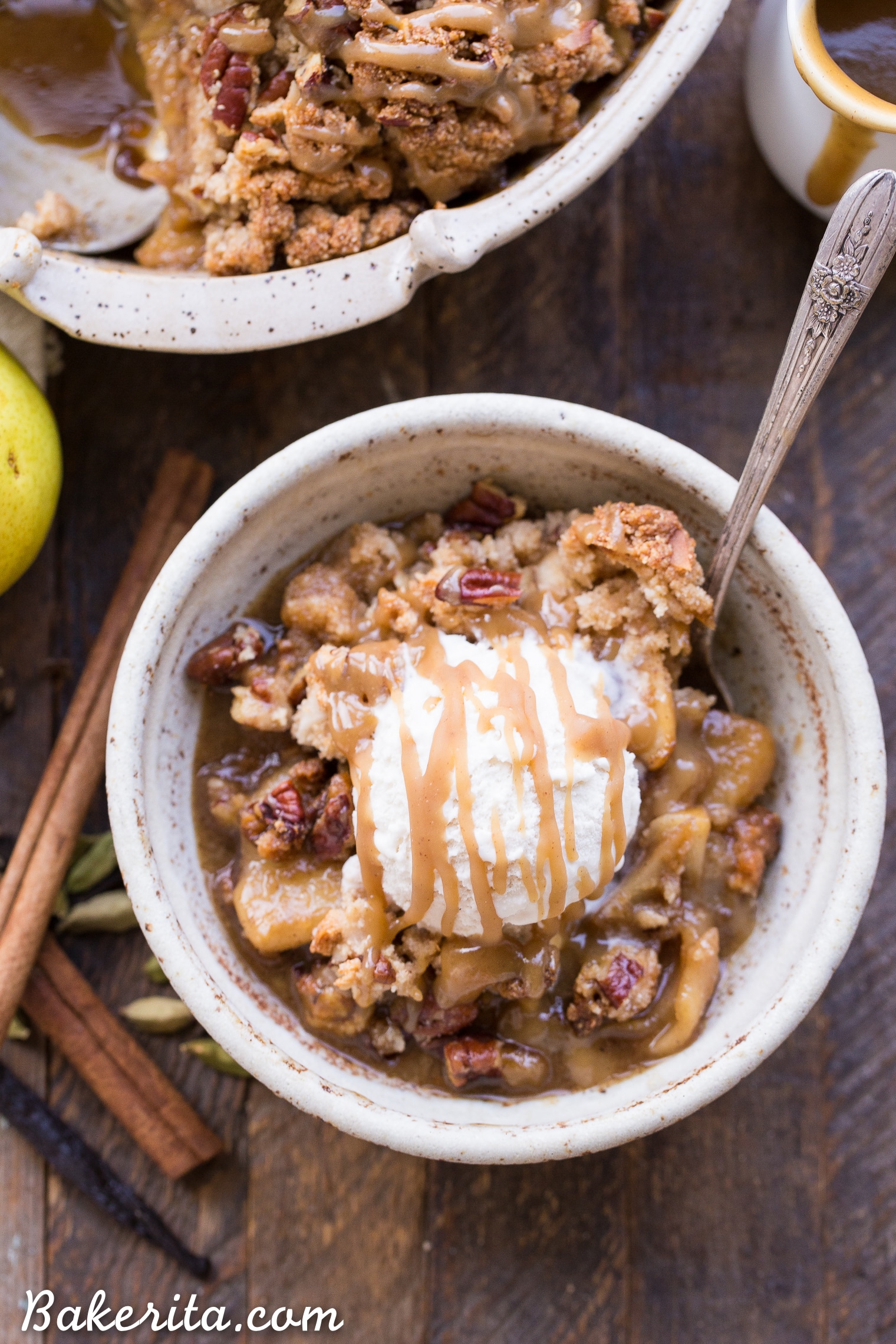 What’s the best way to serve it?

I like to serve it warm from the oven. However, you can let it cool and store in the refrigerator until you’re ready to serve if you want to make it ahead of time. IT reheats well in the oven, or the microwave in a pinch.

Whenever you serve it, make sure you serve it with vanilla ice cream or whipped coconut cream. Then, top it off with a big healthy drizzle of the three-ingredient no-cook caramel sauce. I hope you love this decadent caramel pear crisp as much as I do! Enjoy :) 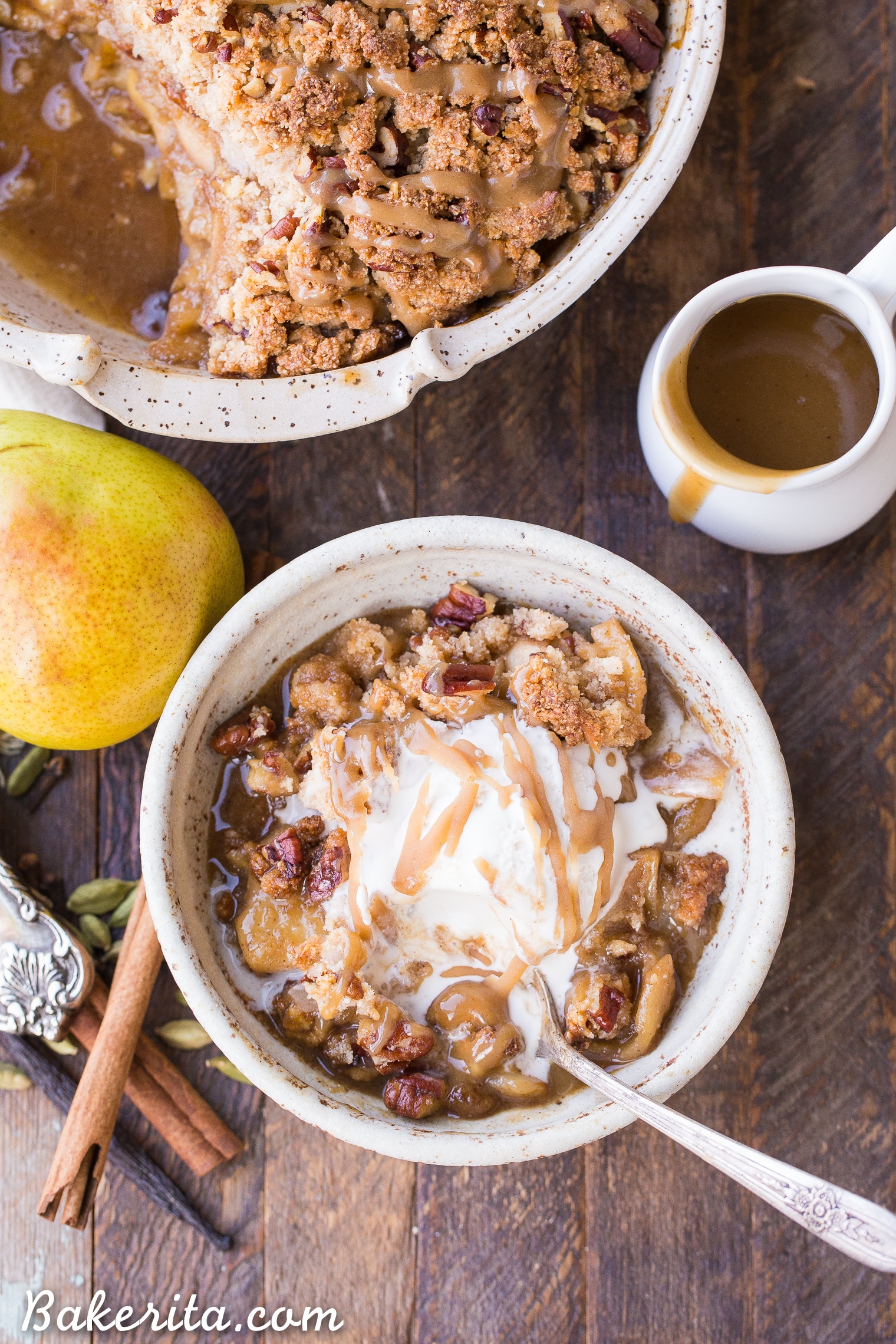 This Caramel Pear Crisp is a decadent and deliciously spiced dessert that’s perfect for the holidays. The caramel pear filling is spiced with cinnamon, cardamom, cloves, and vanilla bean, and topped with a crunchy almond flour and pecan crisp topping. Don’t forget to serve this gluten-free, paleo, and vegan crisp with some whipped coconut cream!

For the crumb topping 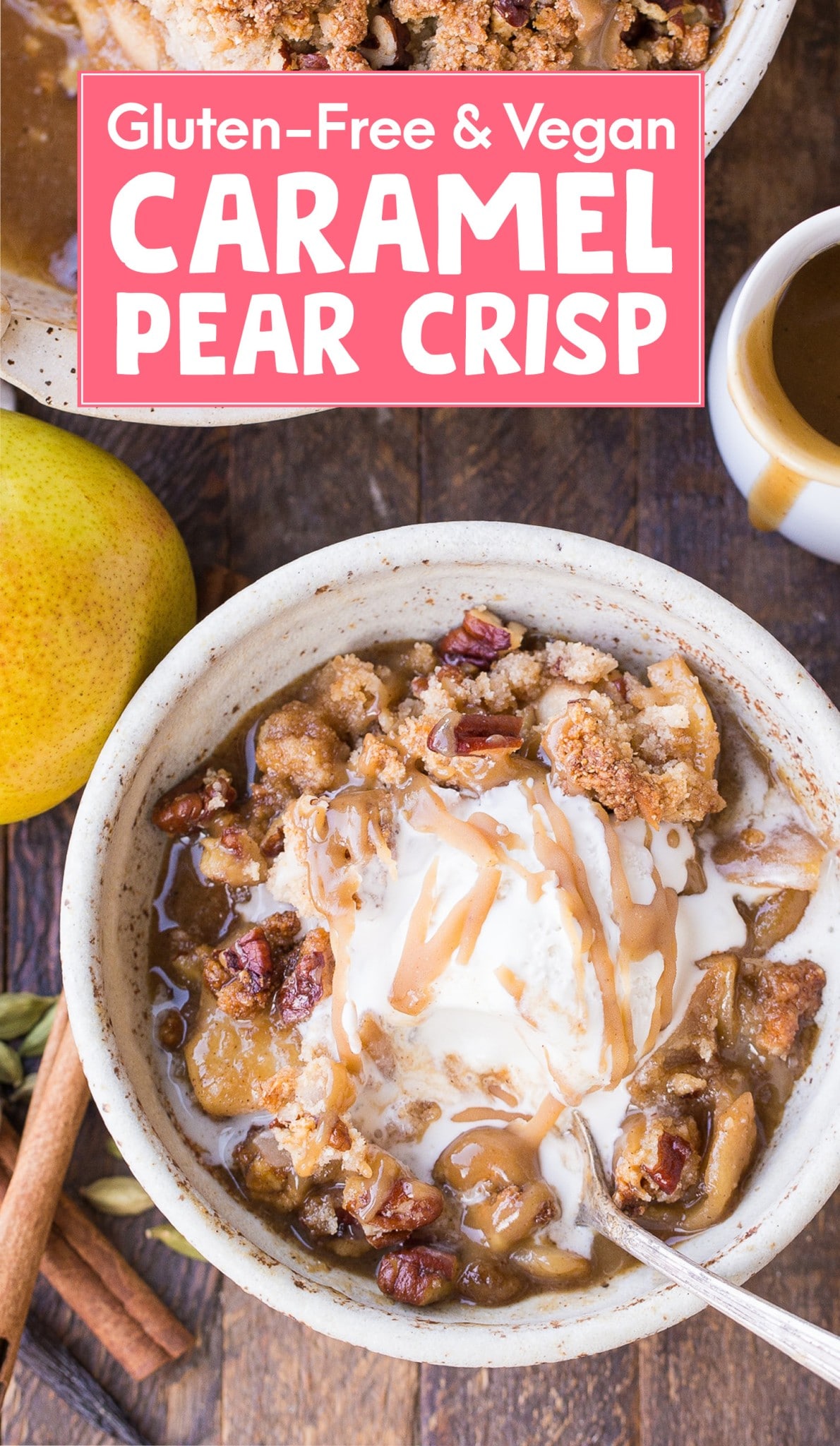