This quick and easy Blackberry Crisp Tart has an oatmeal crust, a layer of quick blackberry chia jam, and fresh blackberries! It’s perfect with vanilla ice cream. This simple recipe is gluten-free, refined sugar-free and vegan. 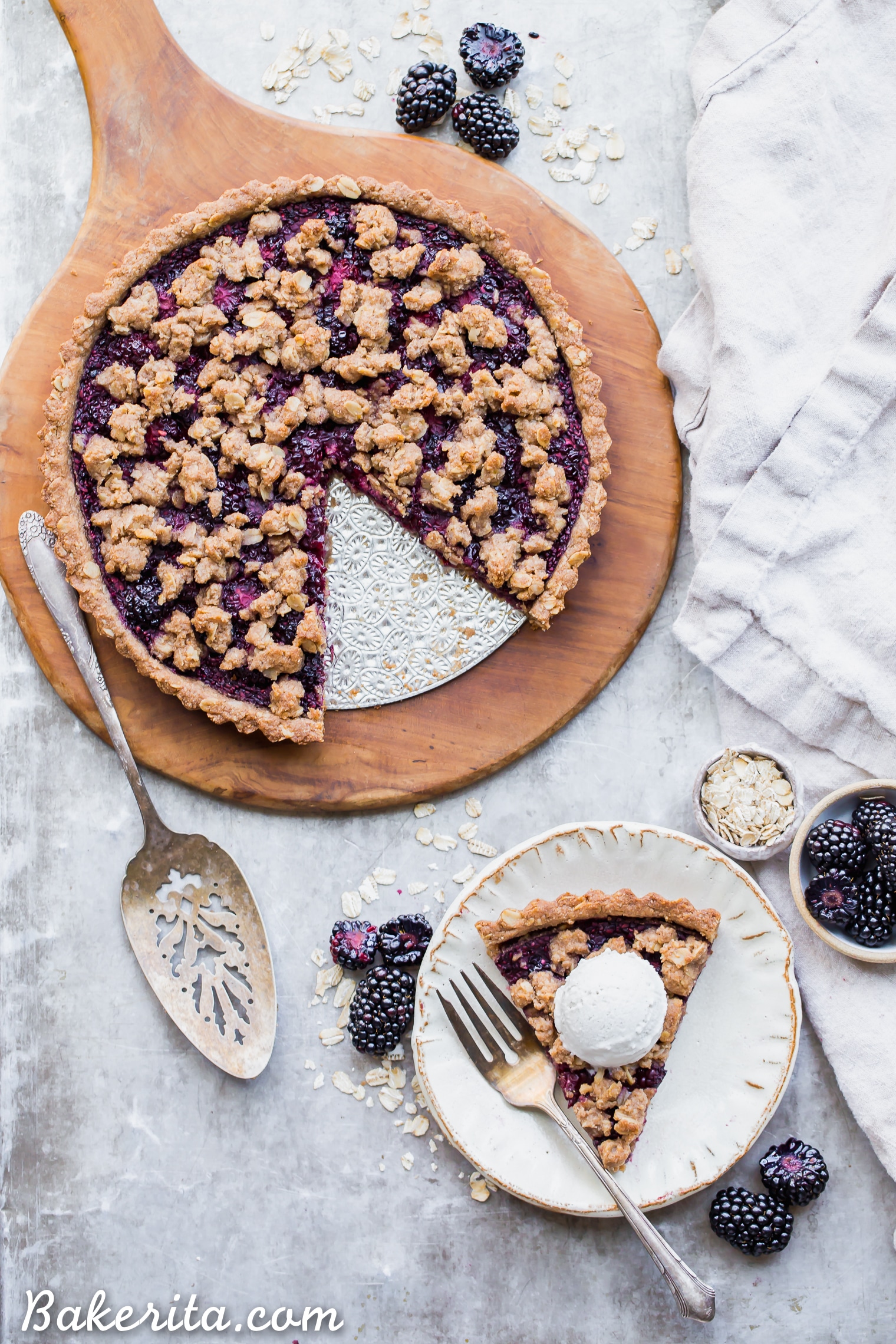 **August 2018 Update!** This Blackberry Crisp Tart is absolutely delicious and has gotten some major love over the two years since it was originally posted on March 9th, 2016…but I thought it deserved a little makeover with a bit of a recipe update and new photos that show off how gorgeous it is! I added a super quick layer of blackberry chia jam to the recipe that makes such a delicious different and amps up the fresh blackberry flavor even more than before.

Of course, it’s still studded with halved fresh blackberries as well…and all topped with that delicious oatmeal crumble (which doubles as the crust, too!). As usual, I’m leaving the original 2016-era post down below…from when I lived in Seattle :) I miss that place! Sending lots of love, friends. Enjoy the recipe! xoxo 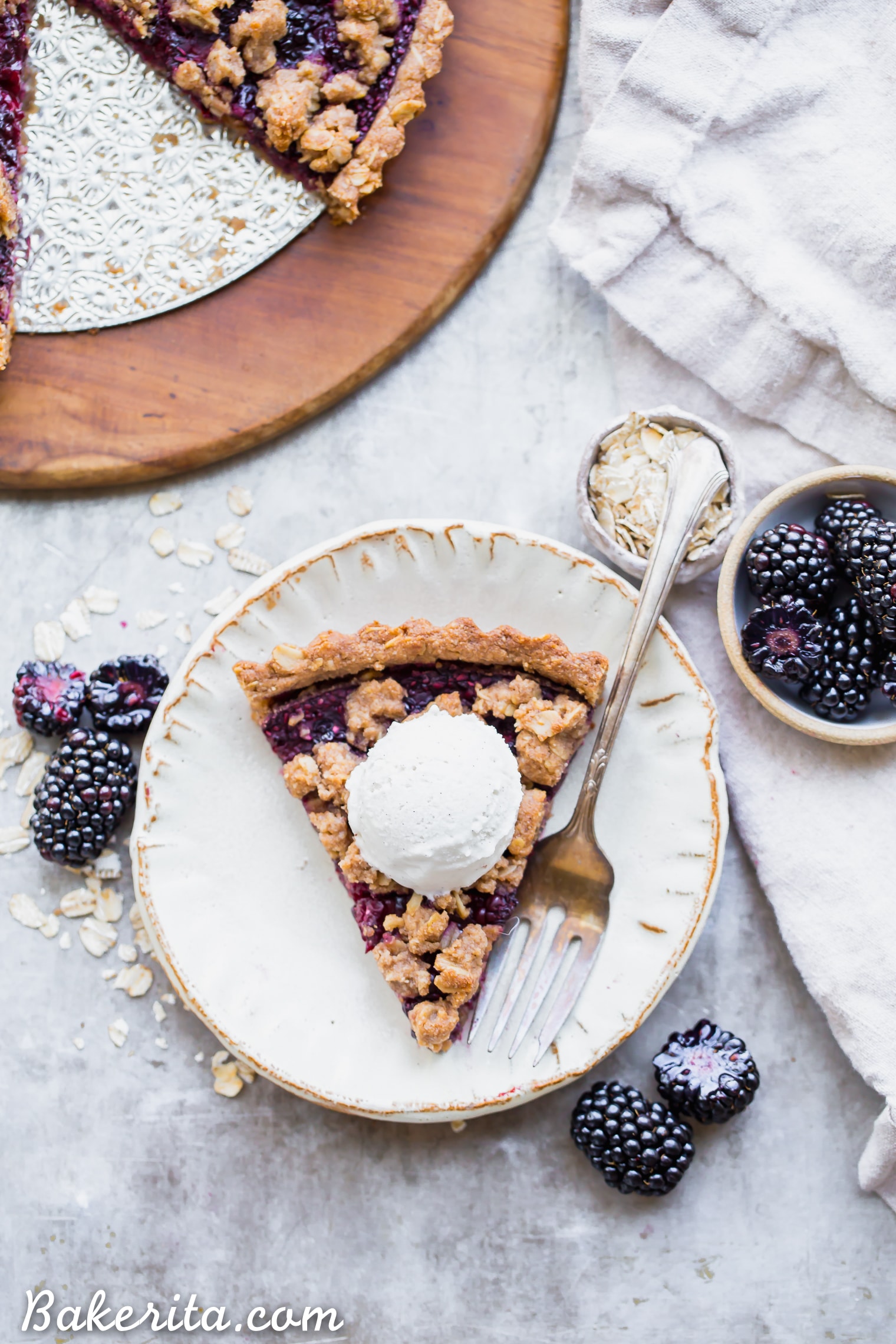 Since I started working for myself, I’ve started spending a lot of time in coffee shops. Despite that I stopped drinking coffee for the most part late last year, I’ve spent a good portion of each week this past year mooching off of free WiFi and becoming a regular at a few favorite coffee shops on my street.

When I’ve been with myself a little too long, I pull myself out of my flour-covered pajamas and head to the small coffee shop a block down from my apartment, or the Starbucks a half a mile down the road. Let’s be honest, my choice usually depends on how hard it’s raining – the harder the showers are pouring down, the more likely I’m taking the shorter walk. Armed with my green tea or coconut milk matcha latte, I can find new inspiration. 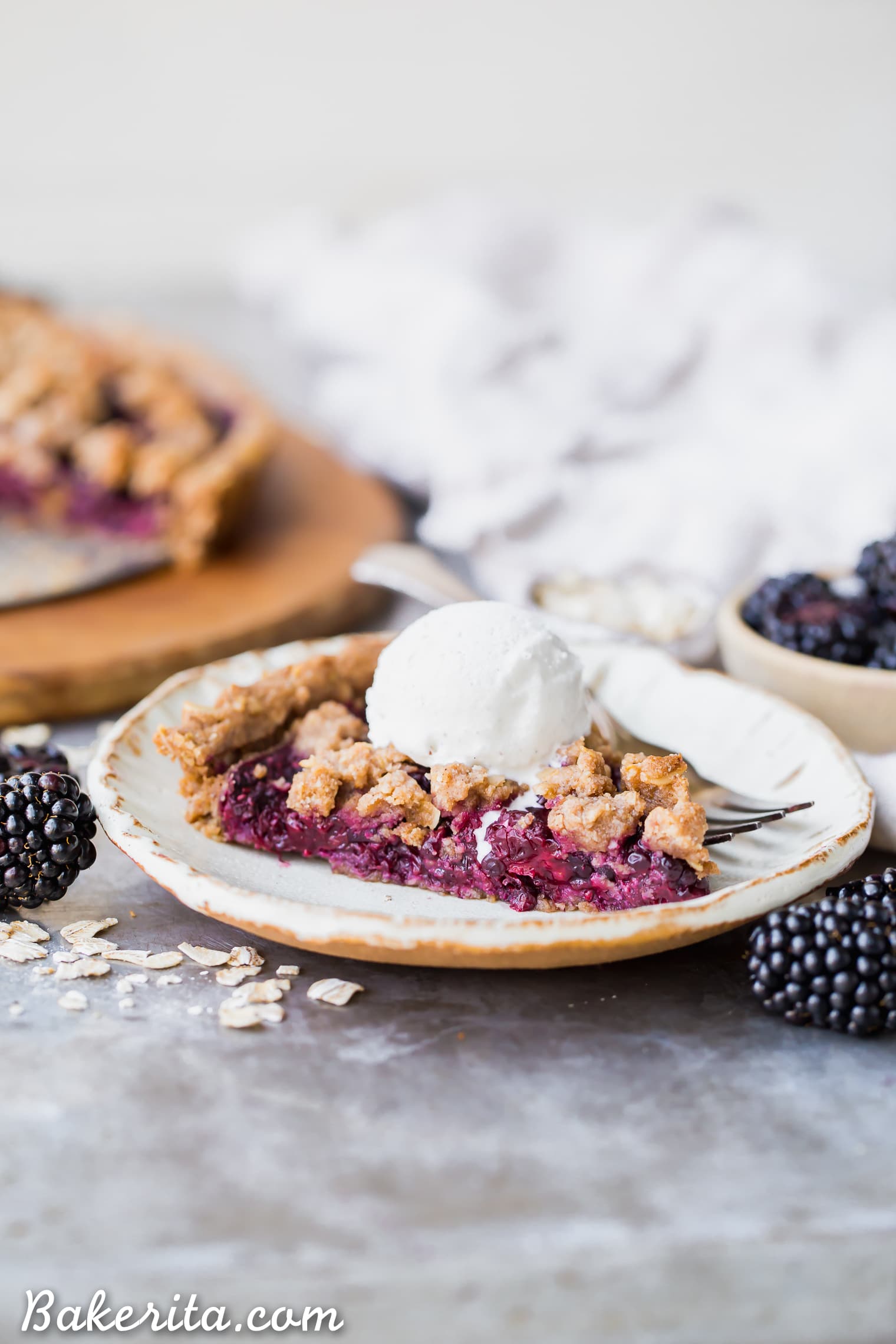 By far, my most productive hours are while sitting in the company of the fellow self-employed, all of us hunched over our laptops in a weird sort of solitary unity. Some days, I’ll spend hours sitting there with my podcast queue streaming, and when I’m done photo editing, writing, and scheduling, it’s dark and the baristas have all changed shift.

In fact, I’m on one of those stretches as I write this. My green tea latte is almost gone, and I couldn’t tell you how long I’ve been sitting here, just how many items I’ve checked off my to-do list. The final check for the day? To tell you guys about this delicious Blackberry Crisp Tart! 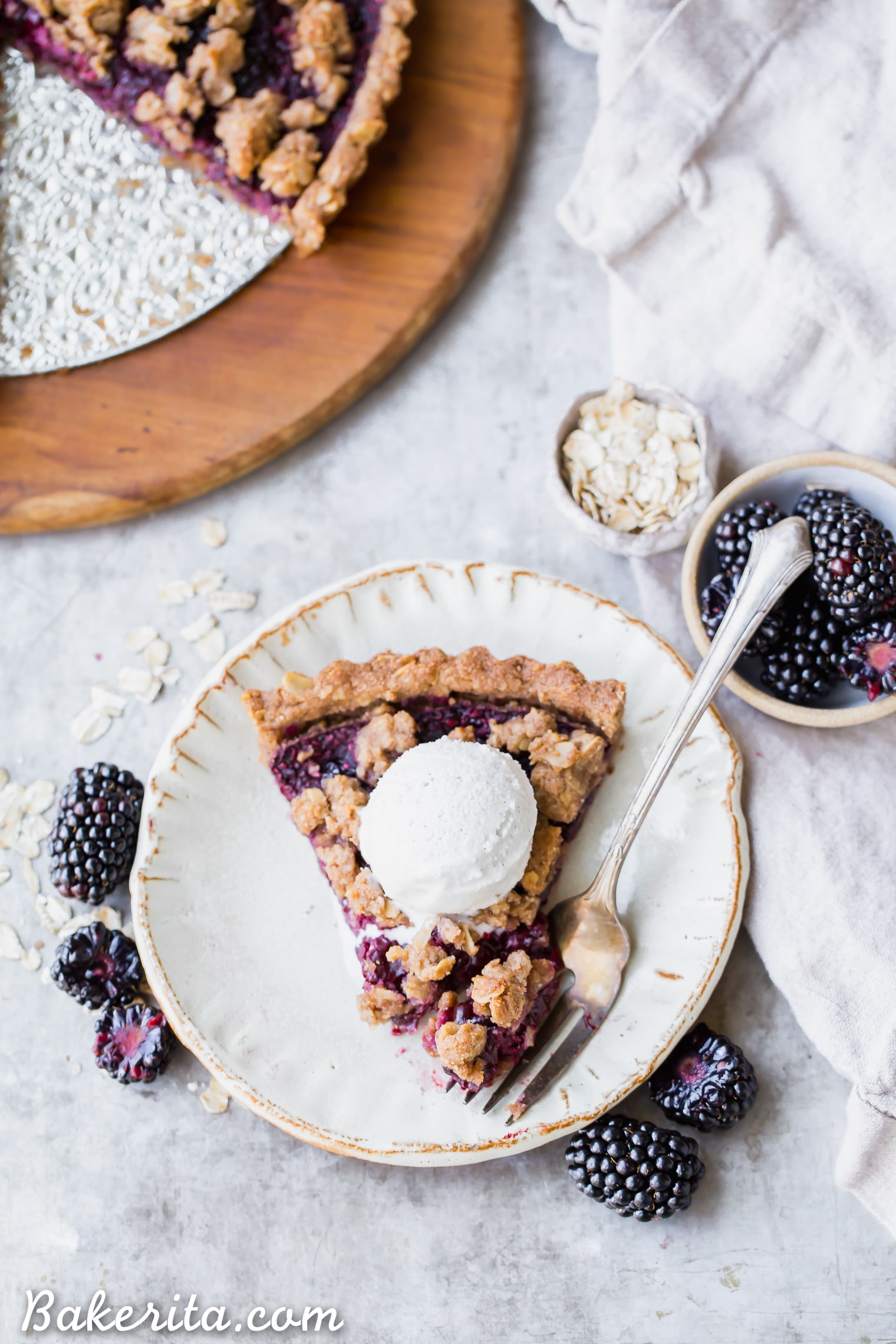 Doesn’t it look delicious? Maybe I’m partial – I love blackberries. They’re one of my favorite fruits to eat and bake with because I can’t get enough of their bright flavor and tartness! When they’re baked, they soften up and sweeten a bit, especially when they’re tossed with a hint of maple syrup and vanilla extract.

The crust doubles as the crust and the crispy crumble topping – who wants to have to make two different doughs? Definitely not me. Because the dough does double duty, this tart can be in the oven in about fifteen minutes or less. 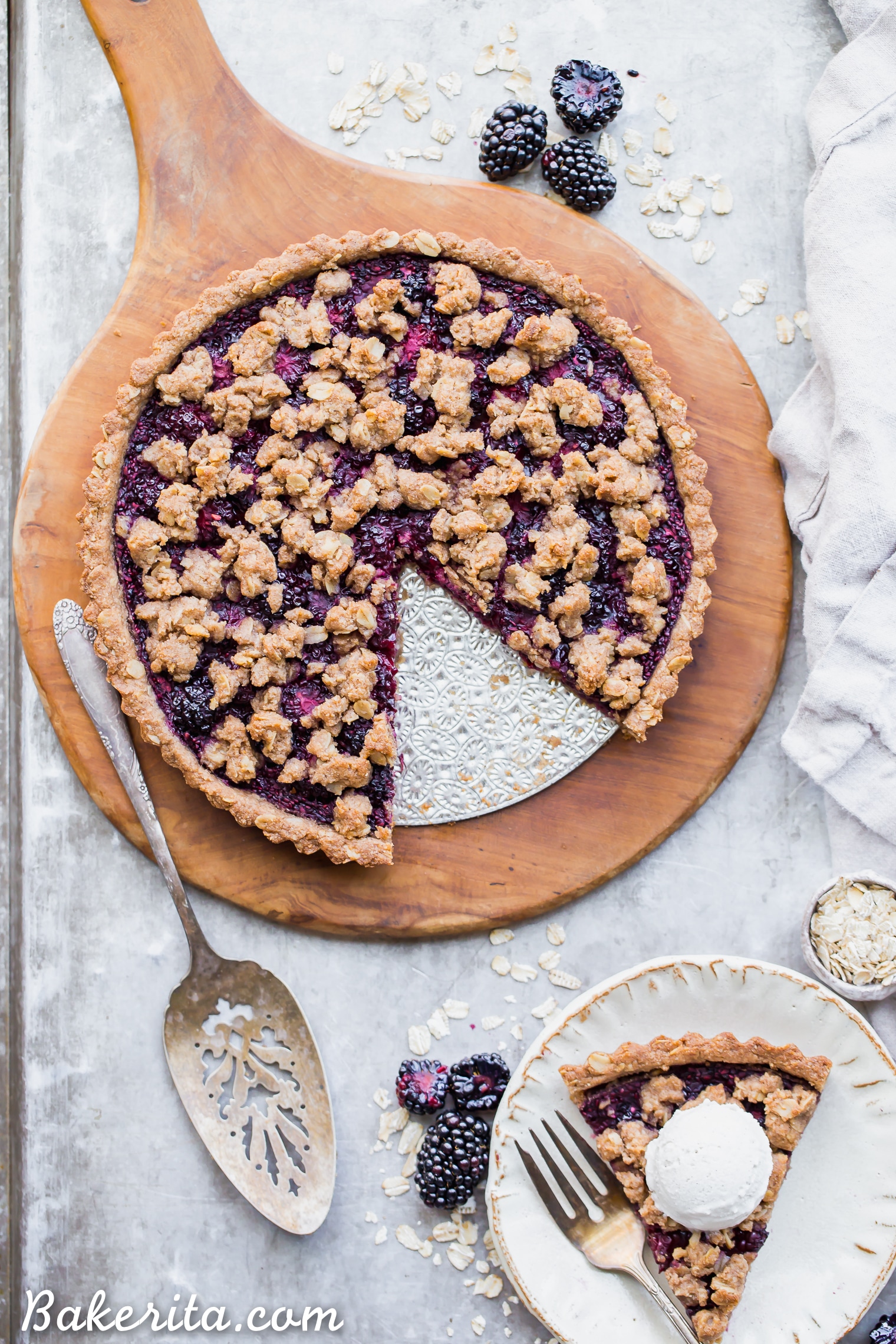 This tart is made with almond flour and rolled oats – be sure to use gluten-free certified oats to ensure you keep the recipe totally gluten-free if necessary! It’s also refined sugar-free, as both the filling and the crust are sweetened with maple syrup, and it’s totally vegan. If you need a dessert to serve to a group of friends with a bunch of dietary restrictions, this one definitely checks all the boxes.

Grab some berries and get baking – I know you’ll love this delicious sweet & fruity tart! Enjoy :) 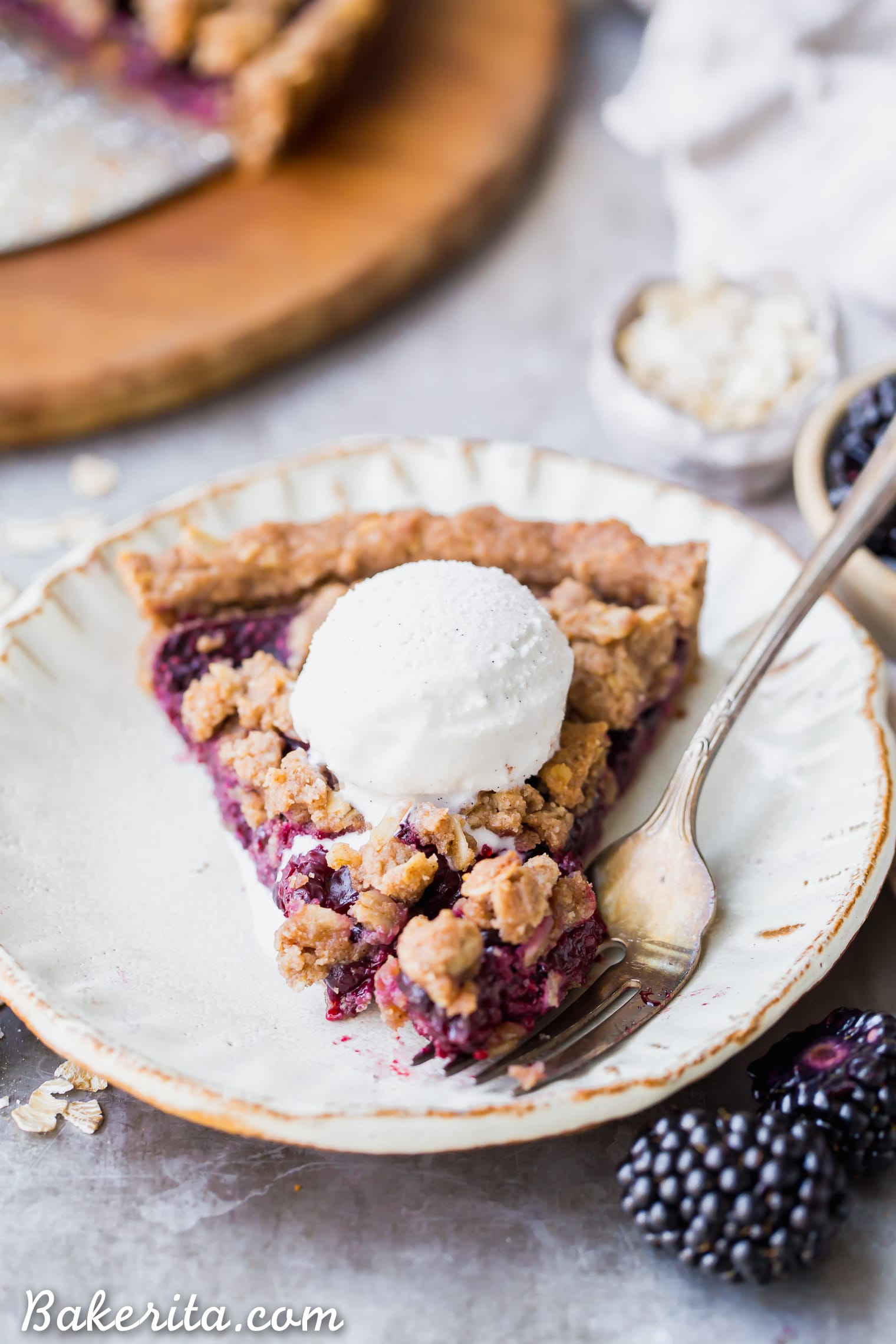 This quick and easy Blackberry Crisp Tart has an oatmeal crust, a layer of quick blackberry chia jam, and fresh blackberries! It's perfect with vanilla ice cream. This simple recipe is gluten-free, refined sugar-free and vegan.

Honey can be substituted for the maple syrup if you're not vegan.

APPLE CRISP 🍏❤️✨ for the apple lovers, or

is there anything better than a slice of warm corn

question: PUMPKIN 🎃 or APPLE 🍎?! not going

Hi you! I missed ya. ❤️ My break lasted longer