In this Baked Vegan Cheesecake, a gluten-free and paleo graham cracker-style crust encases a sweet and creamy vanilla cheesecake filling. Coconut yogurt and cashews create the perfect texture to mimic a classic cheesecake.

I’ve got a number of dairy-free and vegan cheesecakes on my site. We’ve got the Vanilla Bean Cheesecake with Chocolate Ganache, the Mint Chip Cheesecake, the Strawberry Orange Cheesecake, and the Chocolate Chip Cookie Dough Cheesecakes.

But – all of those cheesecakes? They’re no-bake cheesecakes. There’s nothing wrong with no-bake cheesecakes. In fact, they are awesome. Easy to make, no-fuss, and no need to turn on the oven. And while they are certainly reminiscent of traditional baked cheesecake, they don’t have quite the same texture. They also can’t sit outside of the fridge or freezer for too long, or they’ll melt. 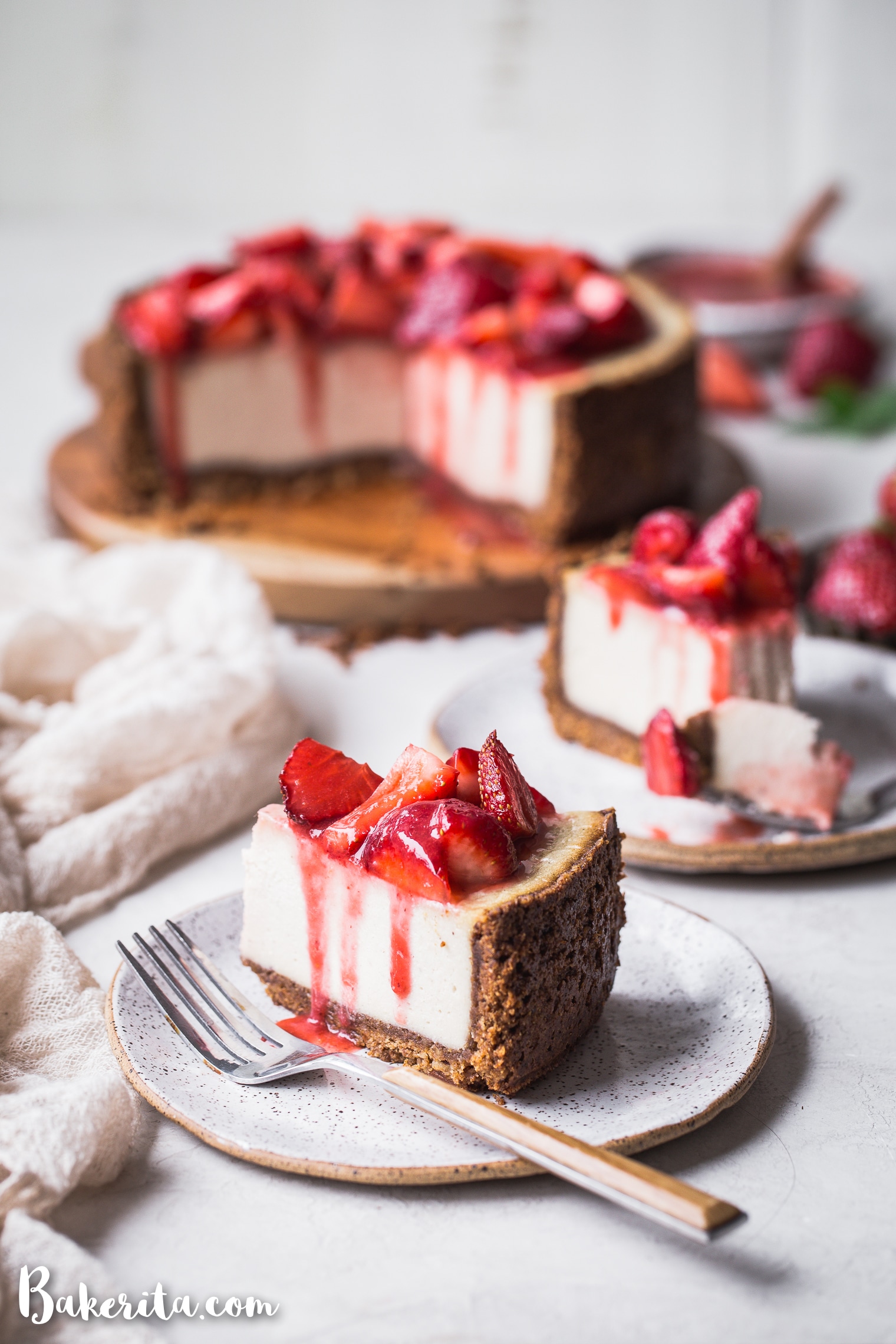 So while the no-bake cheesecakes certainly have their place in my life…I thought there was some room for a new type of vegan cheesecake in my life: 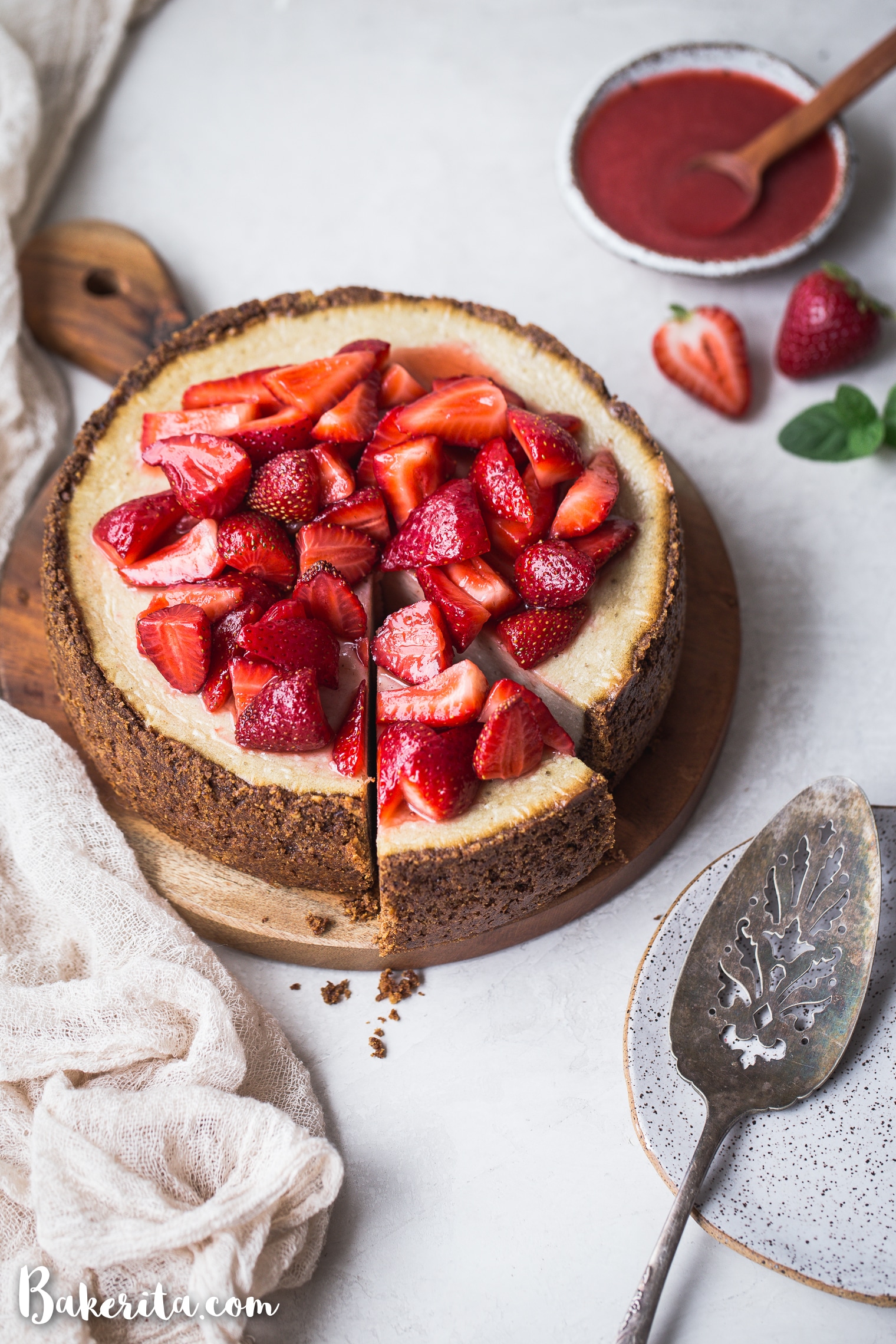 But, let’s talk about the ingredients that go into the filling of this Baked Vegan Cheesecake, because each one is essential to baked cheesecake success.

What makes this Baked Vegan Cheesecake so delicious? 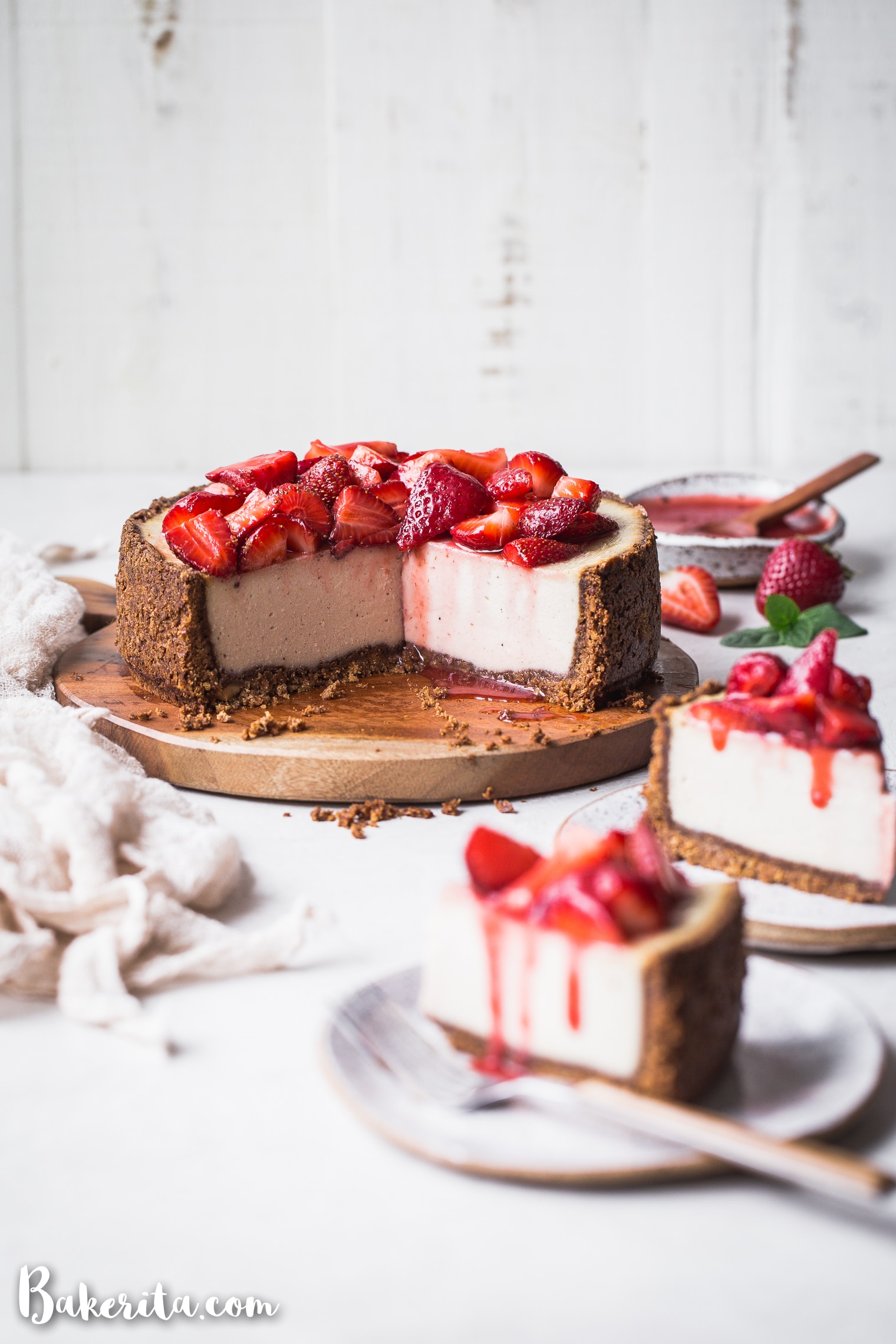 We blend the ingredients together until smooth and then pour the mixture over the pecan-coconut sugar crust, which tastes super similar to a graham cracker crust. We bake it until just barely set, and then it cools in the propped-open oven. After a chill in the refrigerator, it’s perfectly creamy and ready to be devoured!

I topped mine with fresh, macerated strawberries, but you could use any kind of fruit you prefer, or go for something a little more decadent, like chocolate or caramel. Any way you enjoy it, you’ll be in cheesecake heaven! Hope you love this Baked Vegan Cheesecakes – it’s a new staple. 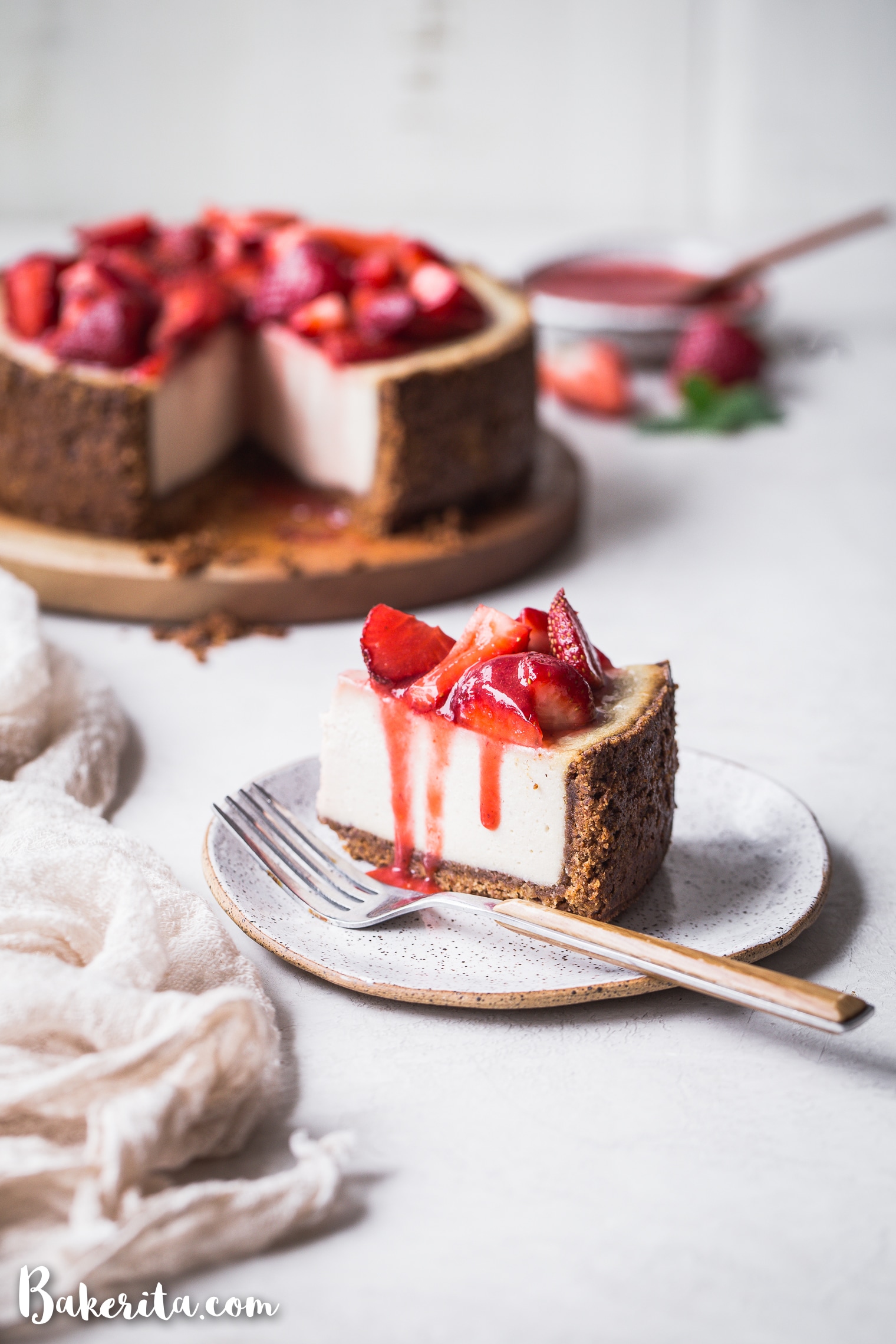 In this Baked Vegan Cheesecake, a gluten-free and paleo graham cracker-style crust encases a sweet and creamy vanilla cheesecake filling. Coconut yogurt and cashews create the perfect texture to mimic a classic cheesecake.

For the strawberry topping (optional)

For the strawberries & to serve 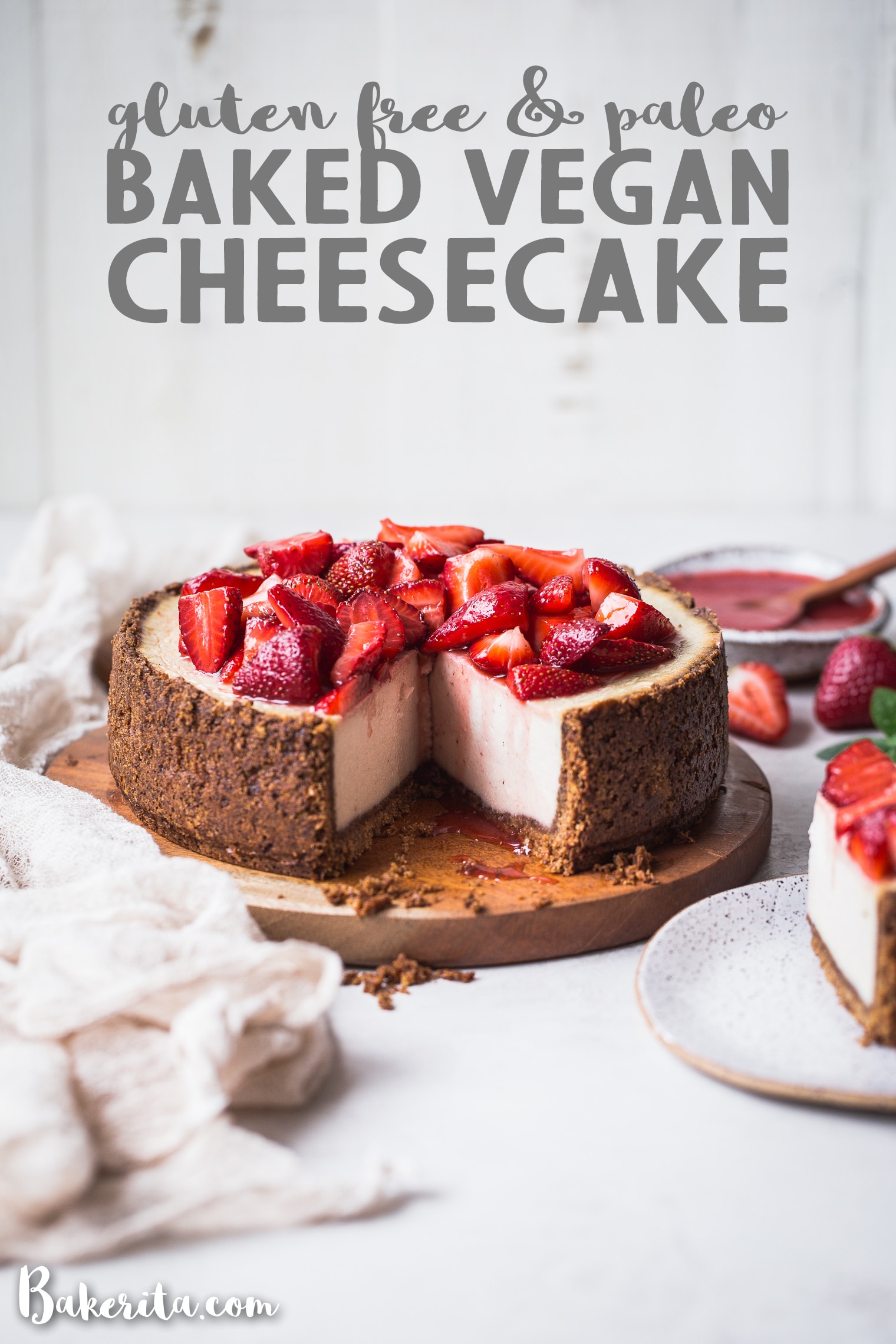