This Baked Vegan Chocolate Cheesecake will make your mouth water! It’s super creamy and delicious, with a rich chocolate flavor and a tasty gluten-free chocolate crust. 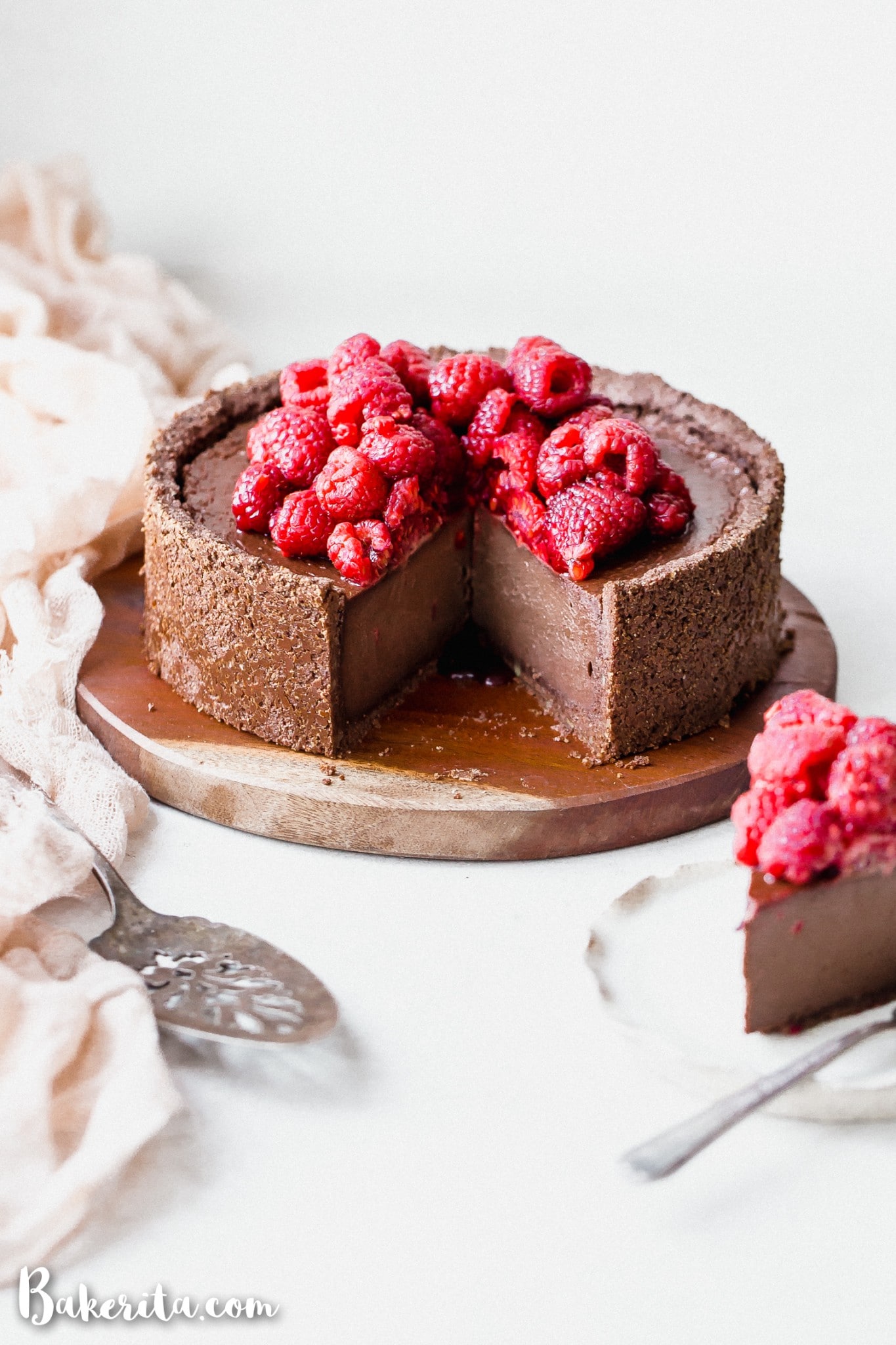 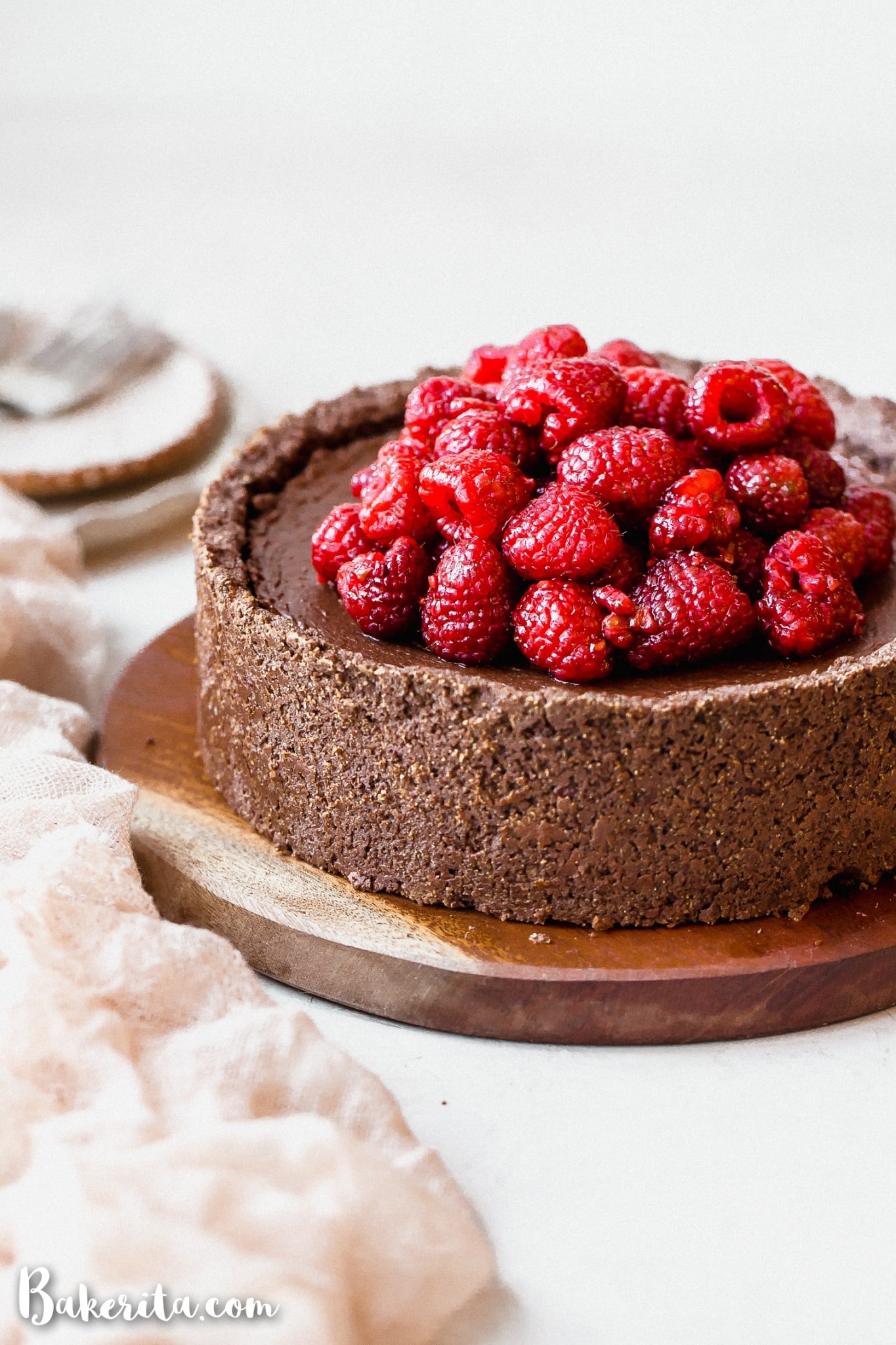 When you bake a vegan cheesecake, you get the same ultra-creamy texture as a traditional cheesecake, with a little bit of tang and a crunchy crust.

Baked vegan cheesecakes also won’t melt on you at room temperature the way a raw one might on a warm day. Bonus!

They’re not too fussy to make, either – a little more time consuming than their raw sister, but not as fussy as a traditional cheesecake either. No water baths, here! Let’s chat about what goes into this cheesecake. 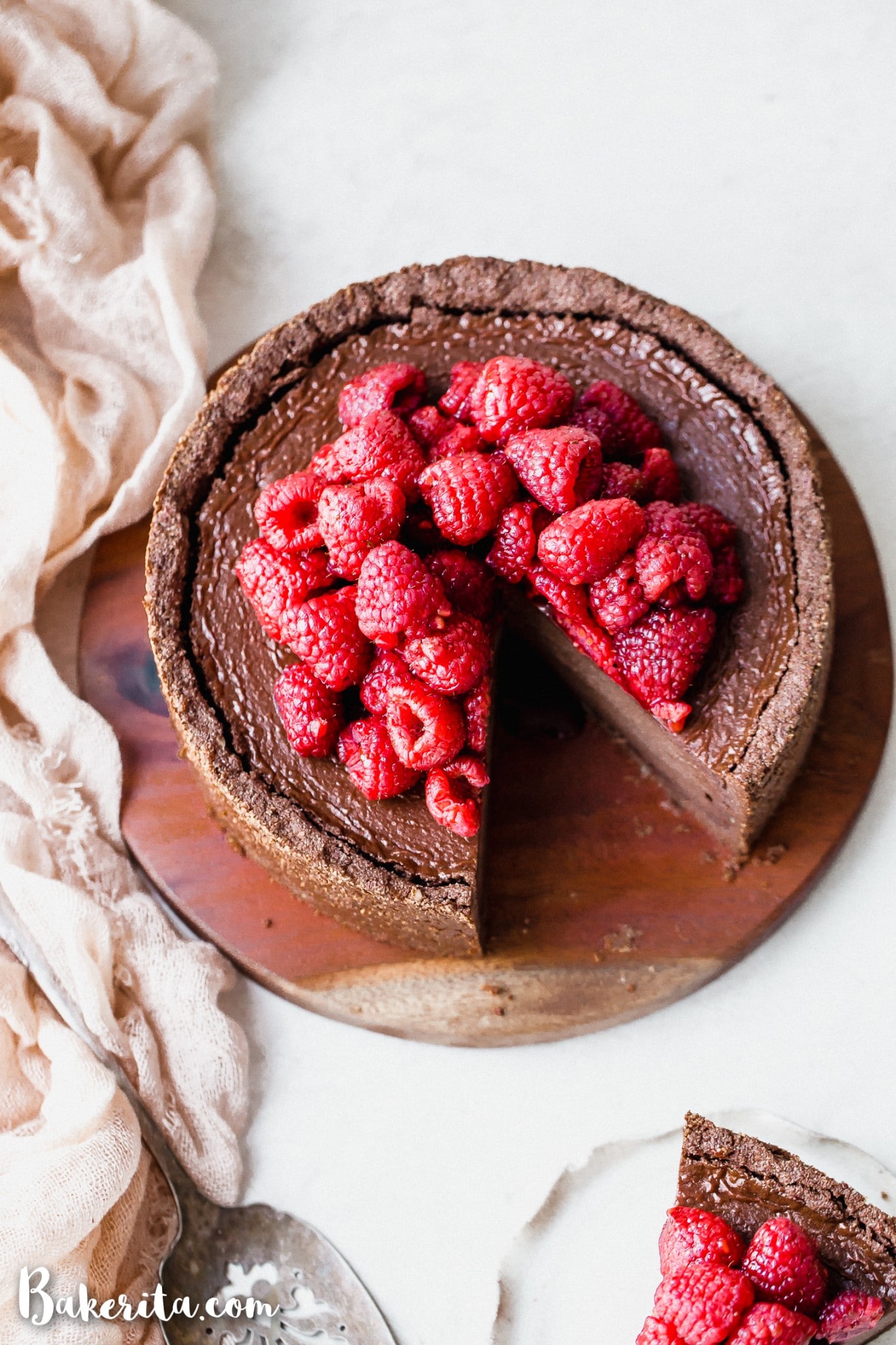 How do I make this Vegan Chocolate Cheesecake?

The crust is deliciously chocolatey and crunchy. It’s made with pecans (or any nut you prefer), almond flour, coconut sugar, coconut oil, cacao powder, and sea salt. It’s pressed into the pan and baked until crunchy before we add the filling! 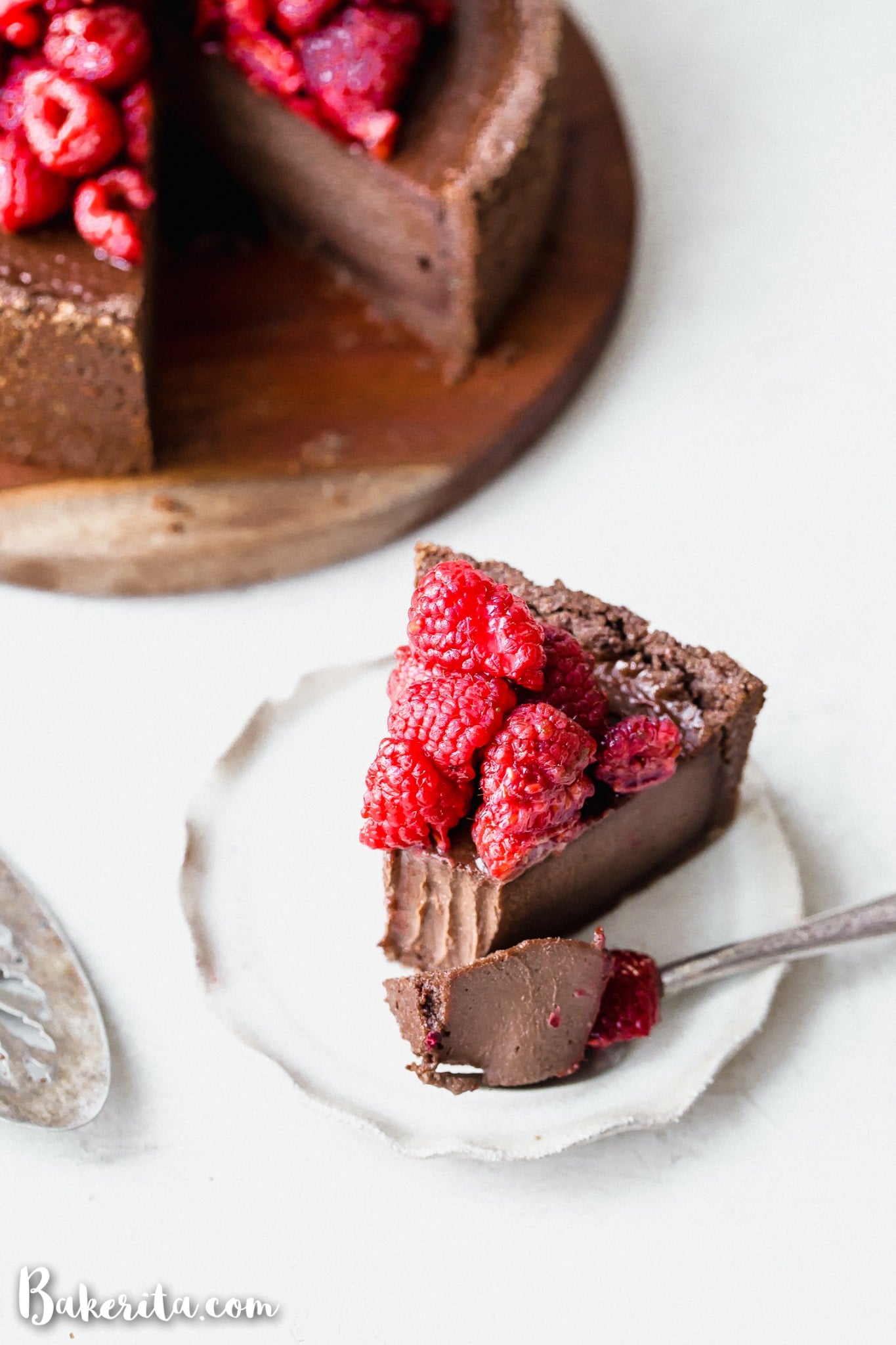 You’ll blend all of the filling ingredients until it’s super smooth and then pour it over the baked crust. Back into the oven it goes to bake for 40 to 50-ish minutes until it’s mostly set. Then, you’ll turn off the oven and open the oven door, but don’t take the cheesecake out just yet!

Letting it cool in the oven for an hour helps it finish setting without a temperature shock, so it won’t crack. Once it’s mostly cooled, you’ll transfer the baked vegan chocolate cheesecake to the refrigerator to chill it all the way through before garnishing and serving. 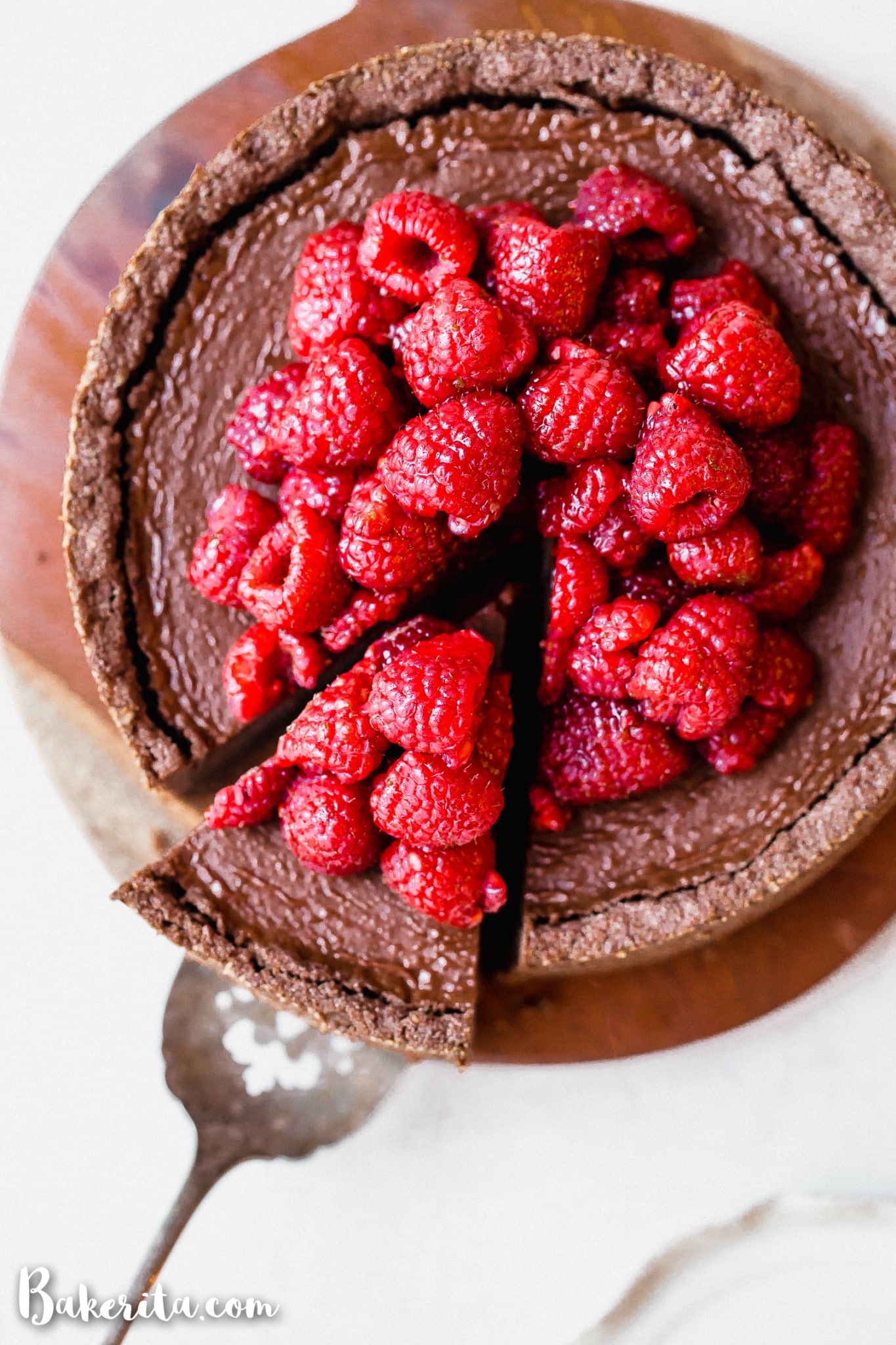 How should I garnish the cheesecake?

You’ve got options here! Here are some of my favorite choices: 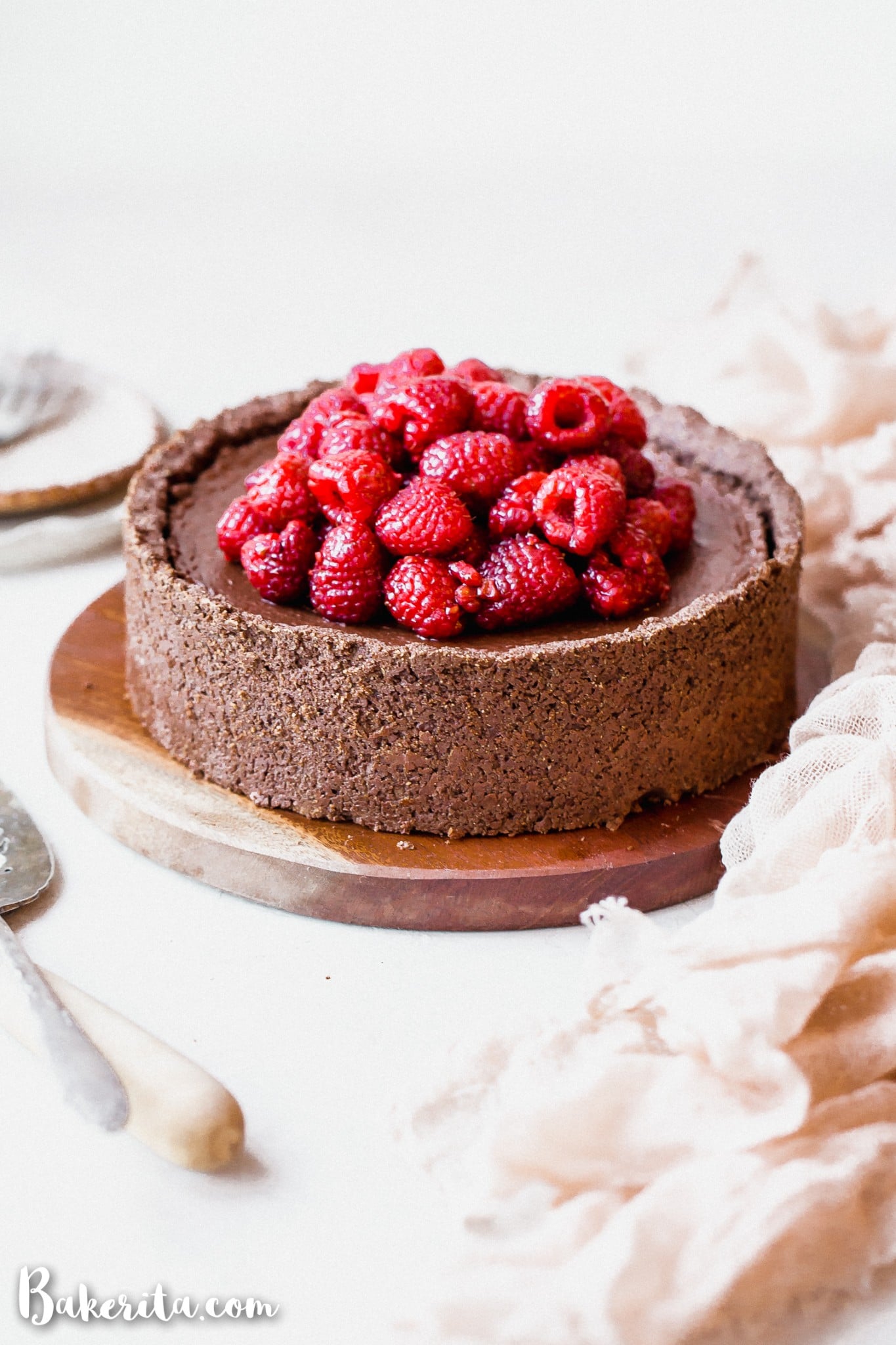 I hope you adore this recipe as much as I do! If you decide to try it, I would so appreciate you leaving a starred review below so I can hear what you think 😍⭐️ xoxoxo!

This Baked Vegan Chocolate Cheesecake will make your mouth water! It’s super creamy and delicious, with a rich chocolate flavor and a tasty gluten-free chocolate crust.

For the raspberry topping (optional)

For the raspberry topping & to serve