This Vegan Pot Pie has a scrumptious flaky gluten-free & paleo crust and the creamy filling is absolutely loaded with vegetables! This is a hearty, filling vegan dinner that is perfect for chilly days and freezes well. 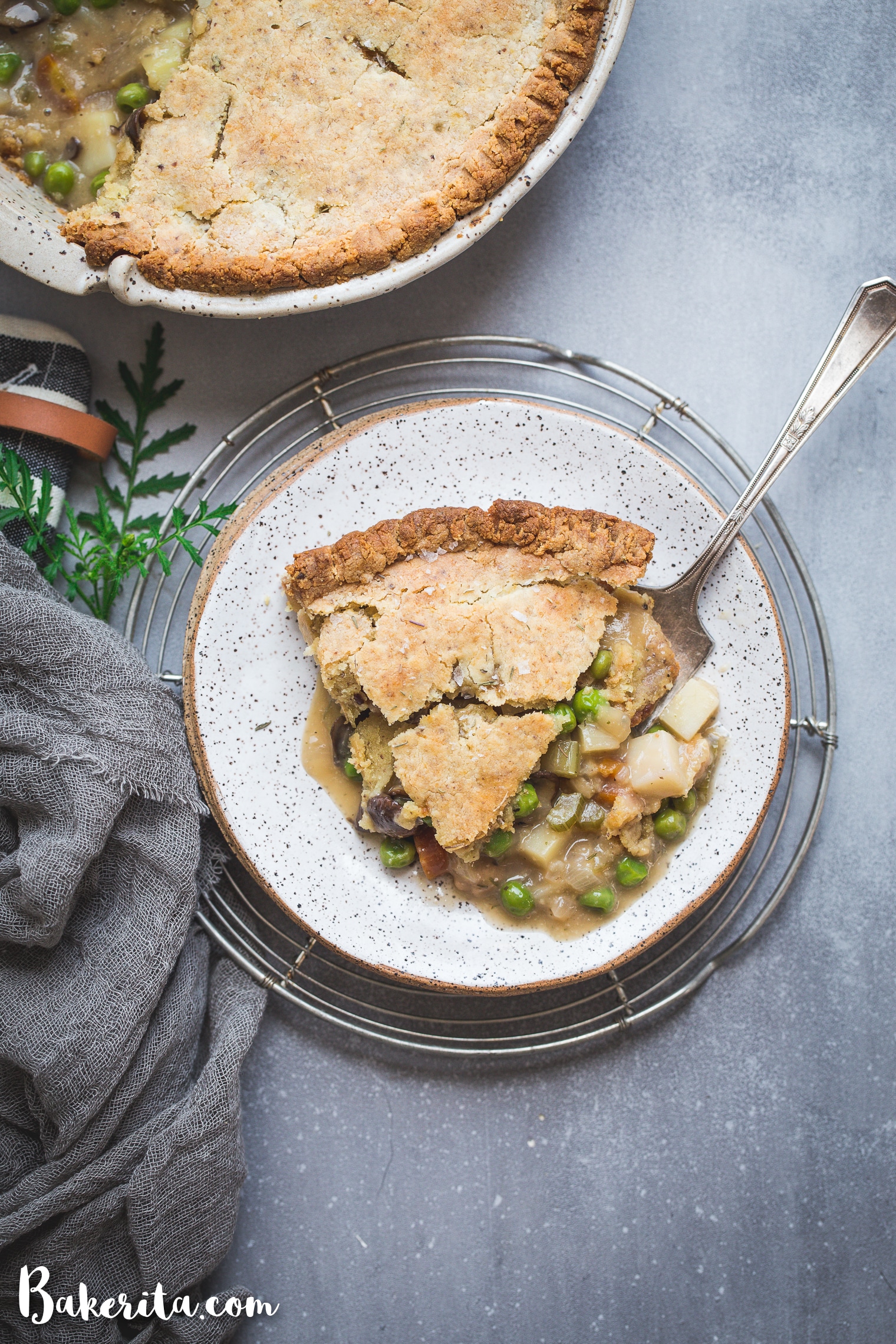 Ever since I was a kid, I’ve LOVED pot pies. The flavorful, creamy filling in between the layers of flaky pastry…pure heaven! No one in my family ever made pot pies, so I was usually eating it at restaurants or the frozen Marie Callender’s variety. Since I stopped eating gluten, dairy, and meat, they have become a thing of the past, since most pot pies have all three of those things.

This Vegan Pot Pie, though? It has none of those things, but it’s equally as warm, comforting, and delicious as the flaky-crusted pot pie you remember. Made with veggies like onion, carrot, celery, mushrooms, and potato, it’s incredibly warm and hearty – like giving yourself a big hug while wrapped in a cozy blanket. So let’s talk about what goes into it: 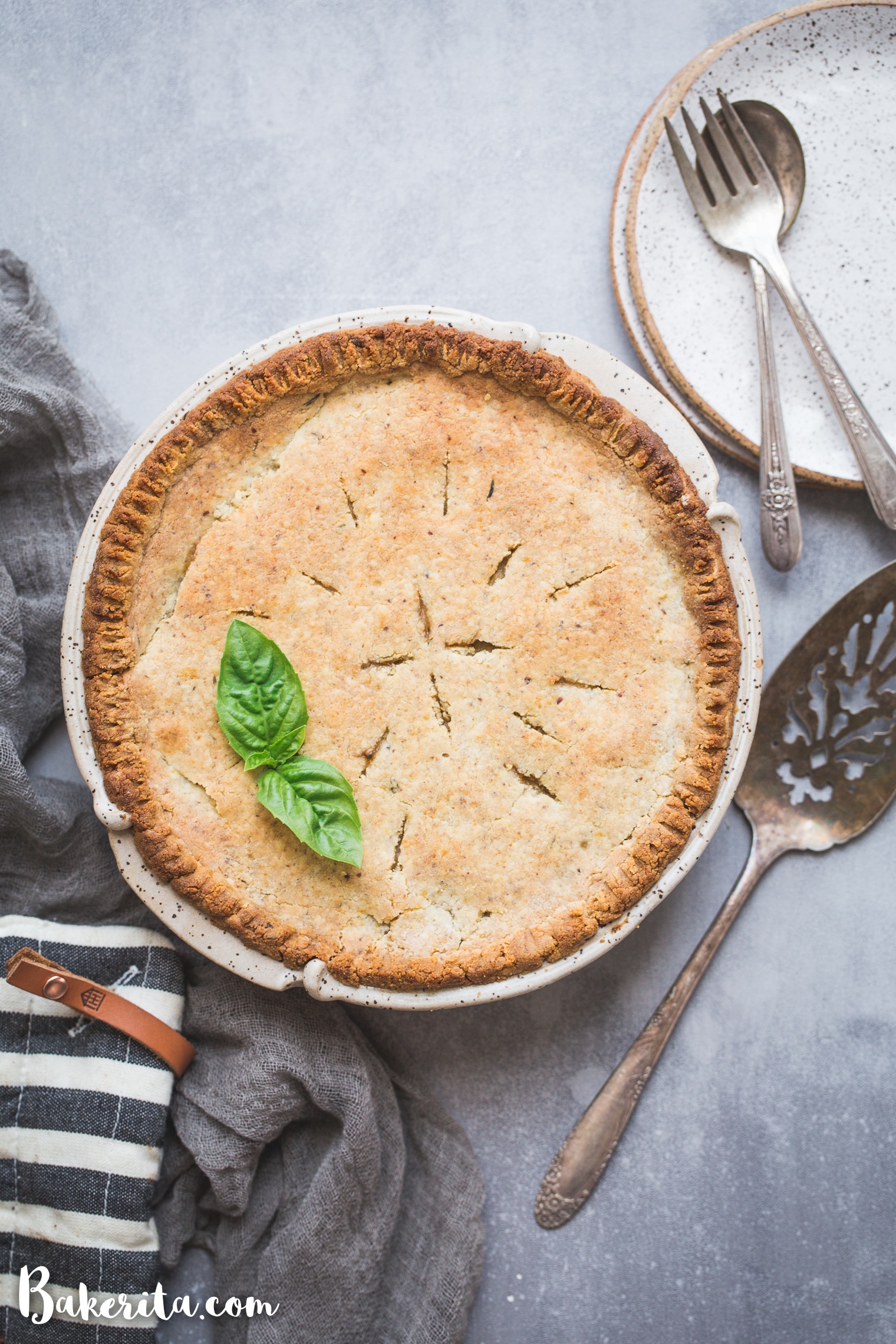 Let me tell you about the flaky gluten-free crust.

This crust is one of my favorite things. It’s gluten-free, paleo, and vegan, AND it’s absurdly flaky and delicious. Some of that comes from ingredient choices and some of it from the technique. For this recipe, we use two flours:

For flavor, we add salt, dried thyme, and nutritional yeast. The nutritional yeast adds a savory, umami flavor – almost cheesy! For flakiness, we work in some refined coconut oil (you could also use vegan butter or ghee) with a pastry cutter. Then, we stir in a flax egg and a few tablespoons of unsweetened nut milk. We use the same method for making the pie crust as you would with any other pie crust, just with gluten-free, paleo, and vegan ingredients! 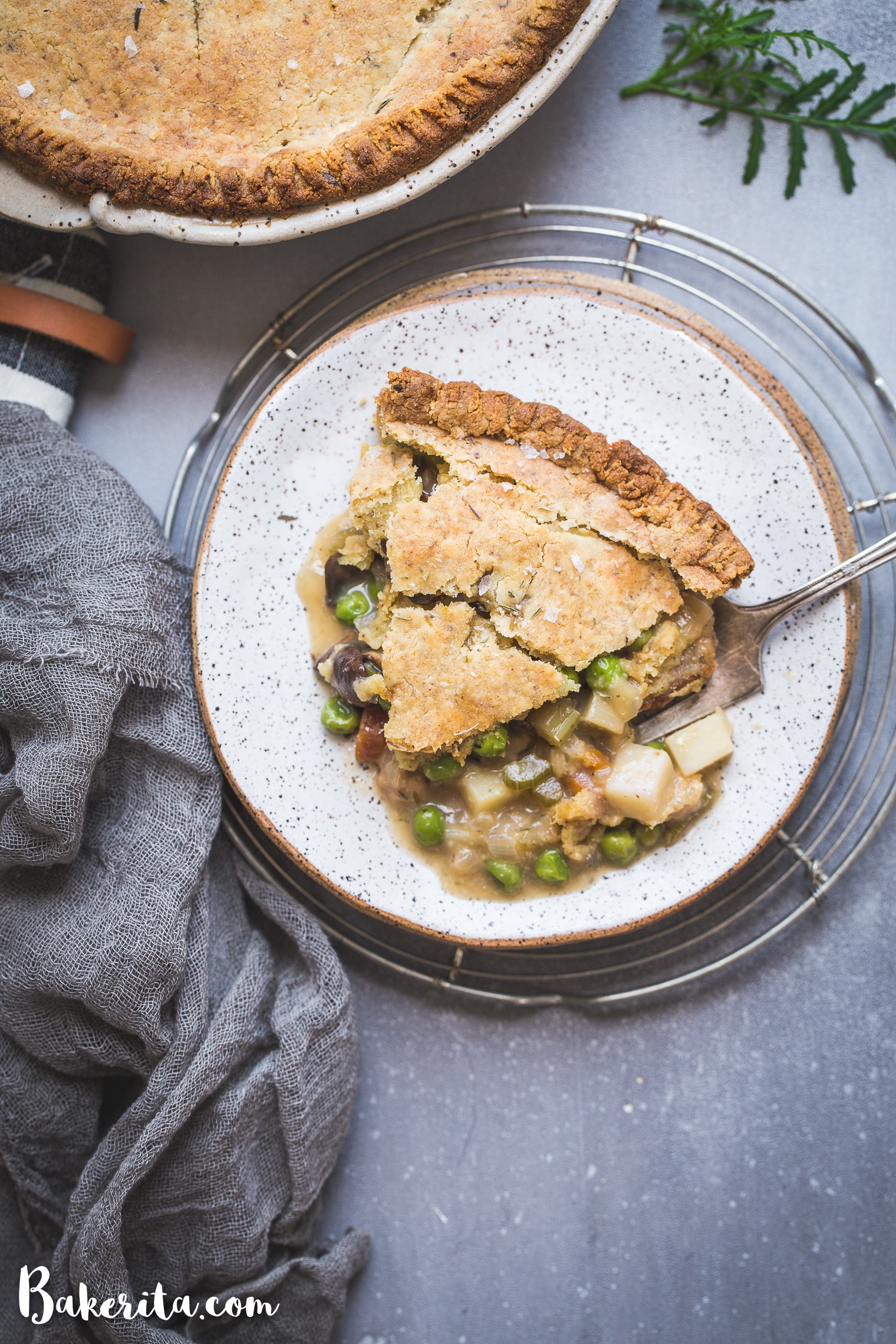 What makes up the filling?

For this vegan pot pie filling, we use a combination of vegetables! I like using onions, mushrooms, carrots, celery, peas, and potato. I didn’t want this pot pie to have any meat substitutes in it because I’m not a big fan of them, but if you like them, feel free to add some vegan chicken to the filling (or real chicken, if you’re not vegan). If you want some extra protein, lentils or beans would also be a good addition!

We make the filling super creamy and thick with vegetable broth, unsweetened almond milk, and arrowroot or tapioca starch. The filling comes together on the stove and then we pile it into the parbaked crust, before topping it with another layer of delicious crust. Dock the dough (that’s the holes on top to make sure the crust doesn’t break), bake until golden, and devour warm! 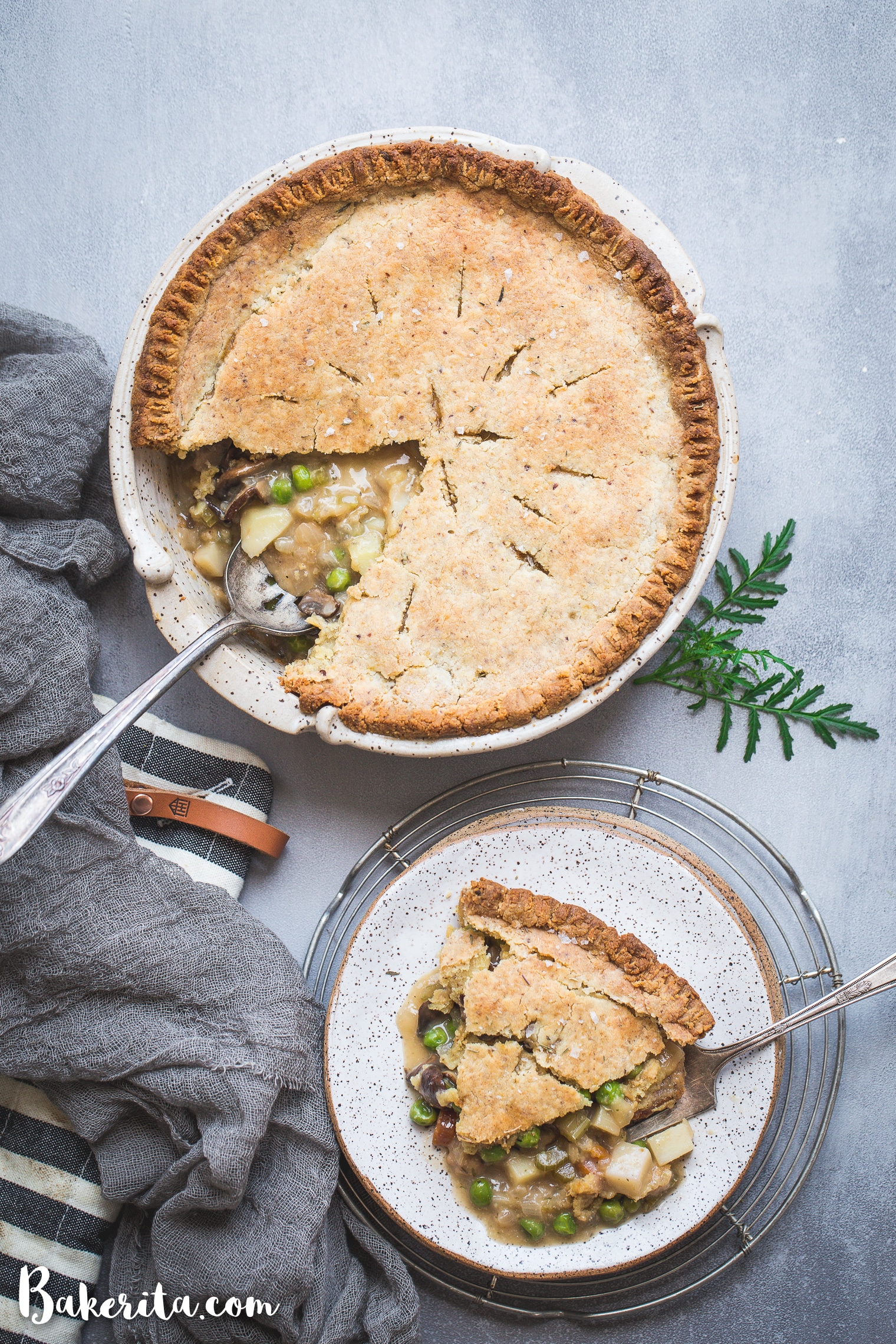 Can you freeze this Vegan Pot Pie?

You absolutely can! You can freeze the WHOLE pie after you’ve assembled it and before it’s baked. Then, you can just bake just before dinner and serve a freshly baked vegan pot pie. You’ll just need to add about 10 to 15 minutes to the baking time.

Alternatively, you can freeze your leftovers too, after the pie has been baked and fully cooled. You can freeze slices individually (perfect for solo weeknight dinners) or wrap and freeze all of the leftovers together. Just make sure whichever method you choose that you wrap tightly and keep it airtight. You don’t want your vegan pot pie to get freezer burn! 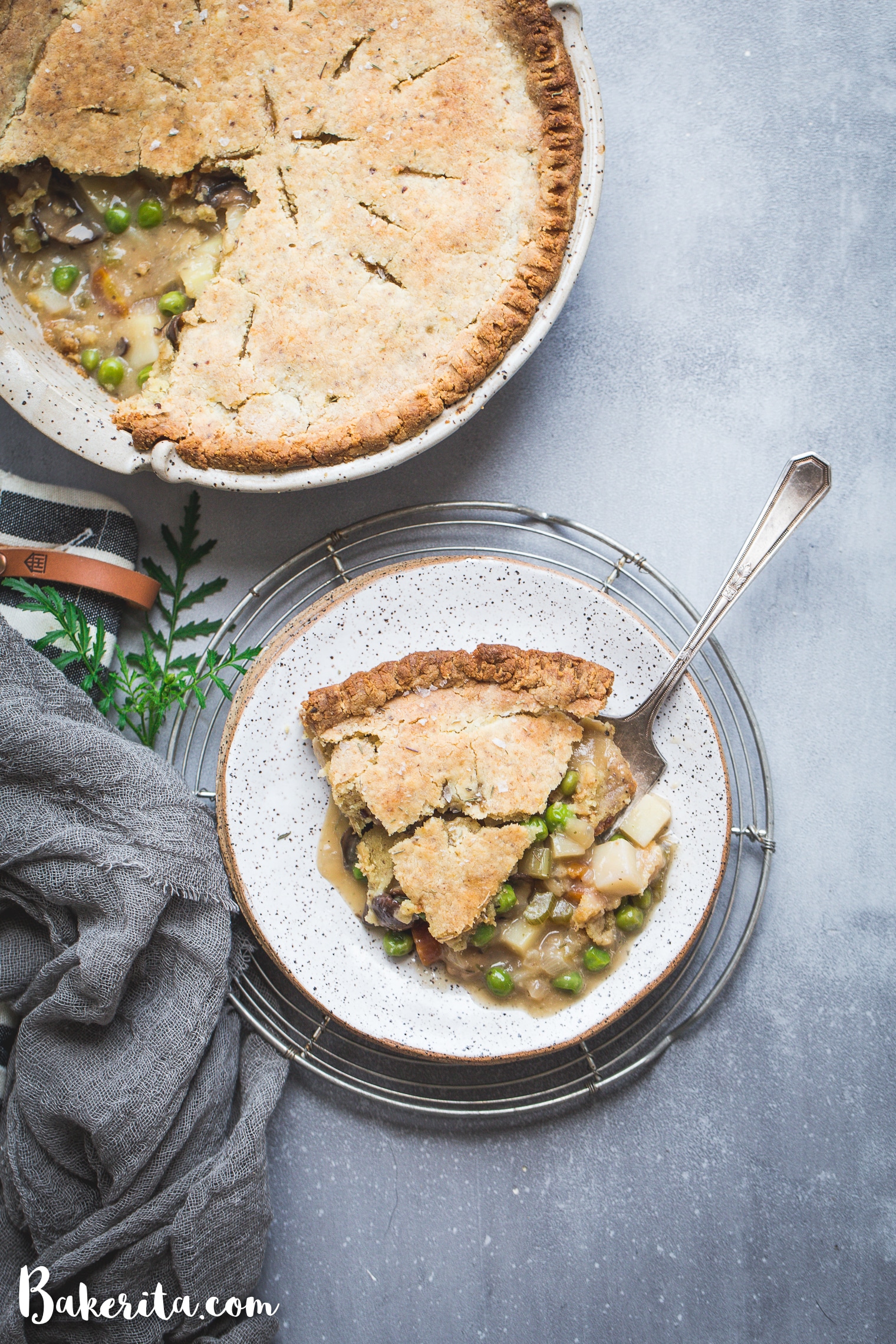 If you like this recipe, you’ll love these too!

Enjoy this recipe and let it warm you up this fall and winter (and for many to come)! Be sure to comment below with your feedback and tag me on Instagram @bakeritablog and #bakerita. Nothing makes me happier than seeing you make my recipes!

This Vegan Pot Pie has a scrumptious flaky gluten-free & paleo crust and the creamy filling is absolutely loaded with vegetables! This hearty, filling meal is perfect for chilly days and freezes well. 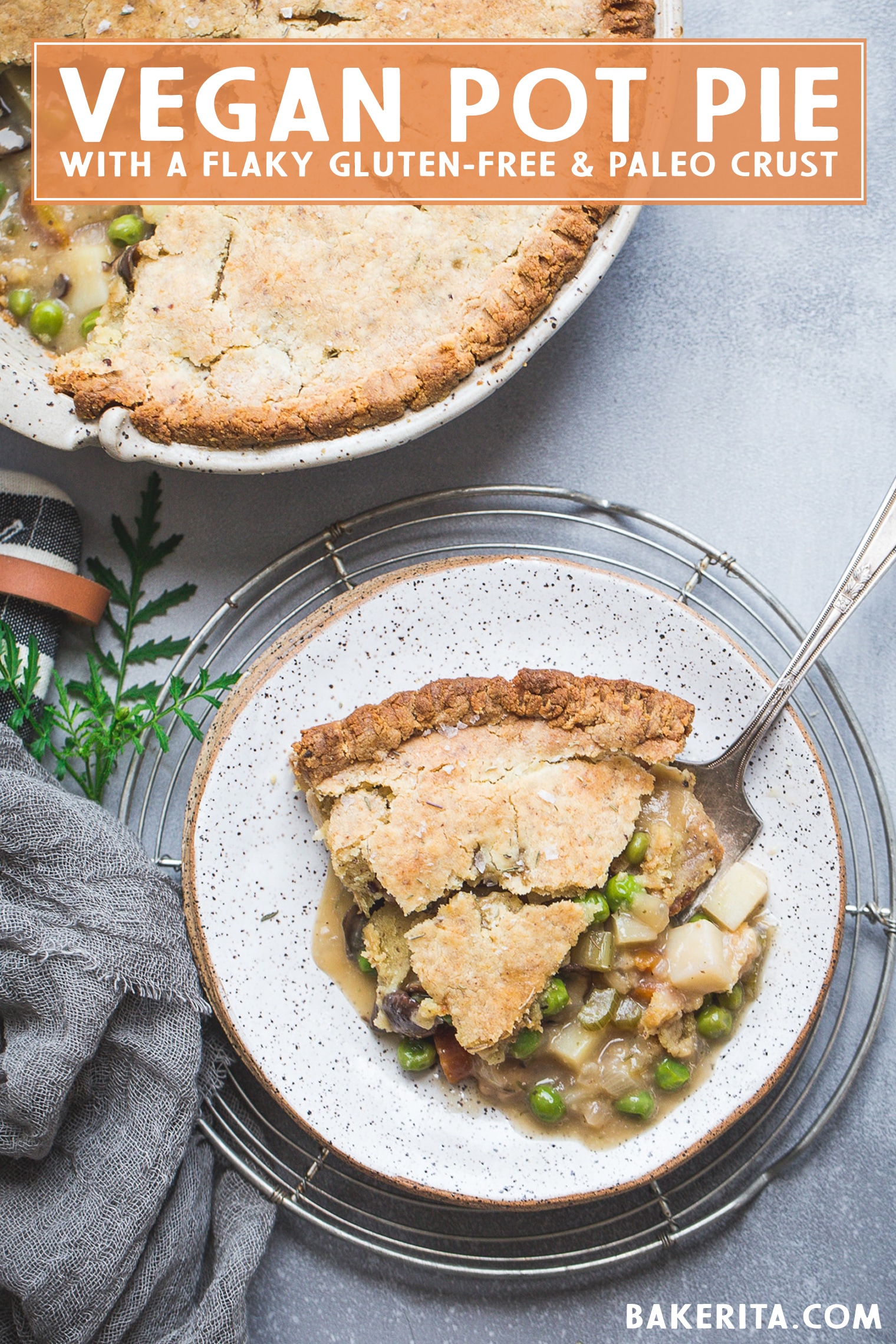