This Vegan Mushroom Stuffing is loaded with wild mushrooms, onions, sage, and thyme, for a fantastic holiday side dish that your whole family will love. This easy stuffing recipe can easily be made into a gluten-free stuffing, as well. 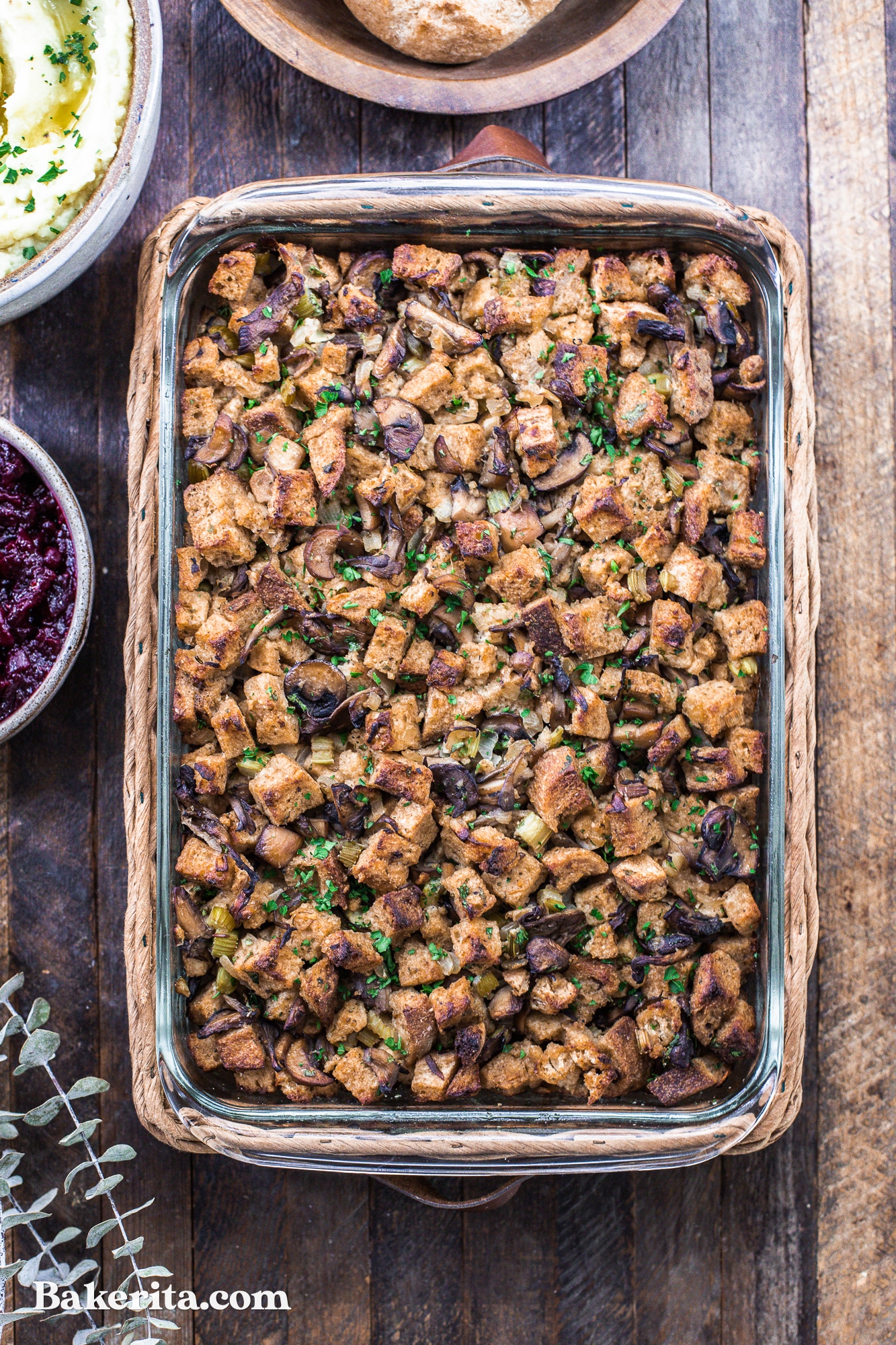 That means, around my family’s Thanksgiving table, stuffing is the STAR. Forget the turkey, everyone here is fighting over the stuffing. We’re a carb family – what can I say?! This Gluten-Free Vegan Mushroom Stuffing is loaded with all sorts of carby, herby, mushroomy goodness that’s begging to be covered in gravy and devoured. 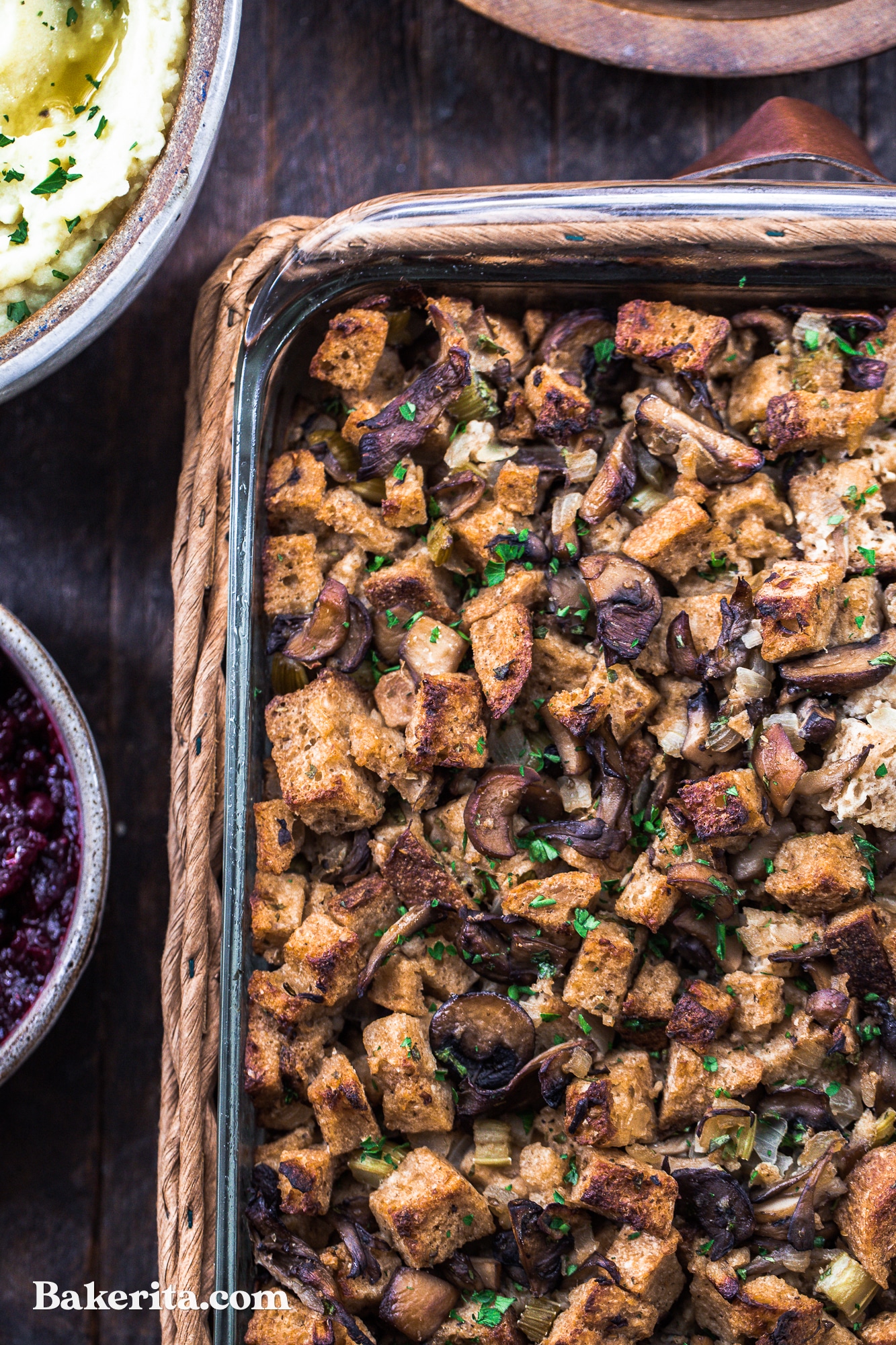 What is stuffing, exactly?

Traditionally, stuffing is called stuffing because it was stuffed into the turkey. Now, being that this is a vegan stuffing…we’re obviously not stuffing any turkeys here. However, the bread/mushroom/herby goodness is just as good when it’s not baked inside of a bird! And there’s no risk of food poisoning – always a good thing in my book.

Bread is typically the main component to stuffing (though some recipes use cornbread or crackers instead, like my grandma’s Ritz cracker stuffing). Before making, you’ll traditionally toast the bread or leave it to stale a bit. Then, we’ll combine it with sauteed veggies, herbs, and broth to soften it, before baking to get a crispy top with a luscious, soft filling. Almost like a savory bread pudding, but with a little less moisture. 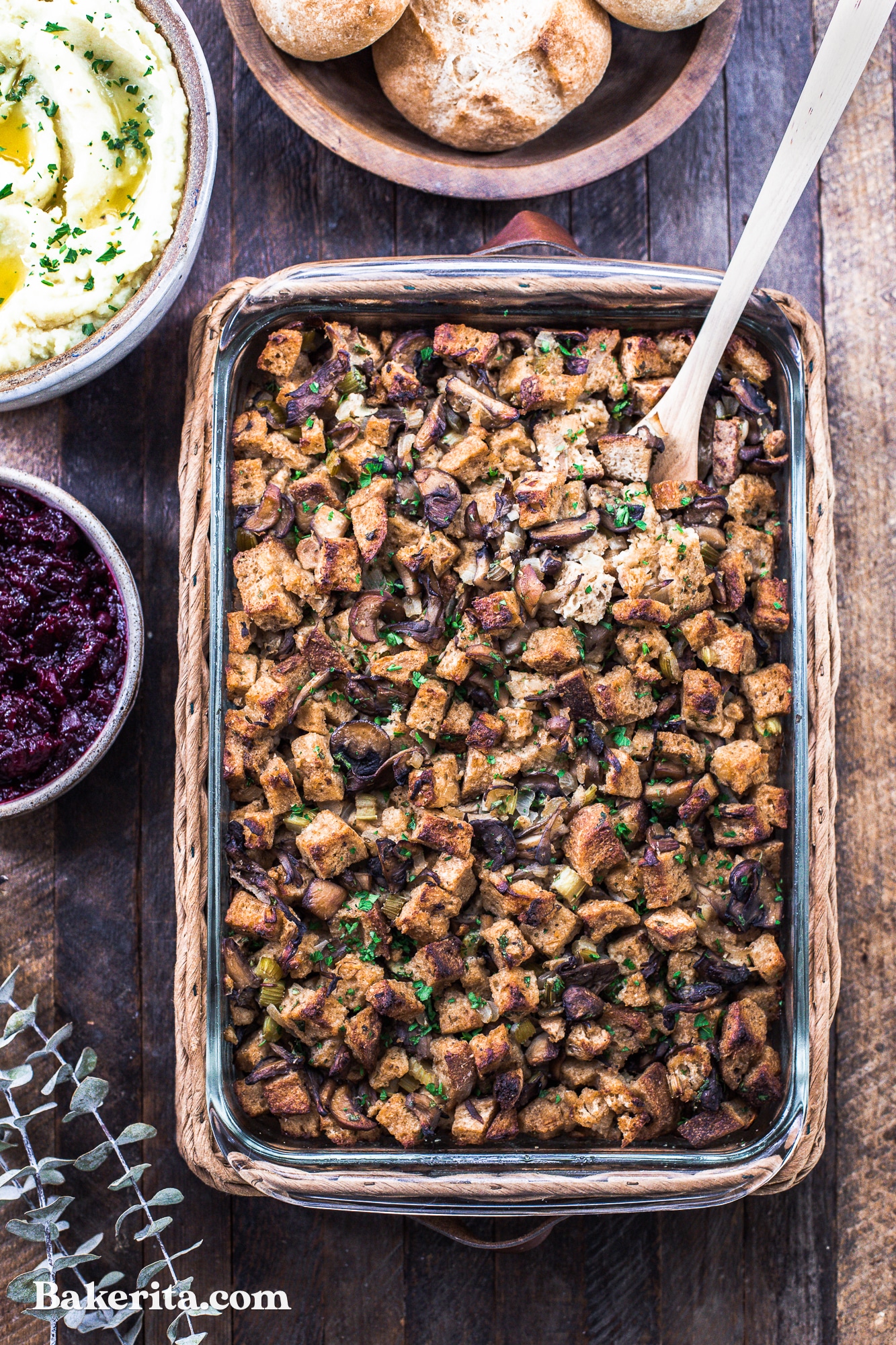 What makes for the best stuffing?

Can I prepare this vegan mushroom stuffing ahead of time?

A big YES to that!!! Stuffing is one of the Thanksgiving dishes (along with the perfect Vegan Sweet Potato Casserole and Easy Cranberry Sauce) that’s absolutely perfect for making ahead of time.

Prep this vegan mushroom stuffing a day or two ahead of time, and keep it covered in the refrigerator until the day of serving. It’ll taste as fresh as ever, and save you loads of time. I find letting the unbaked stuffing sit for a day actually helps all the flavors meld so deliciously, as well. Bonus! However, if it seems a little dry after it’s time in the fridge, as a little more broth on top to help moisten things up. 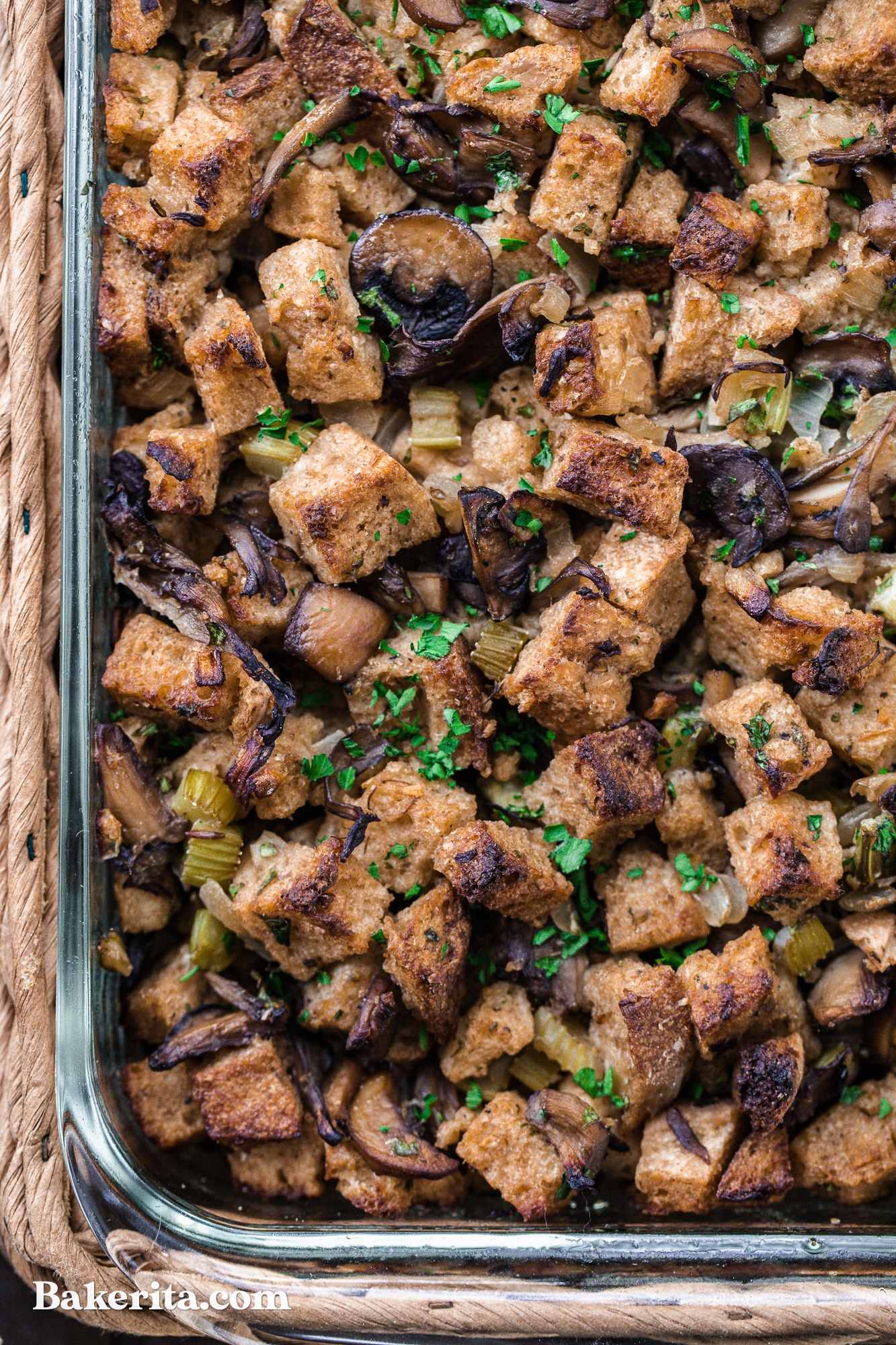 You can absolutely leave them out! It won’t be a mushroom stuffing anymore, but it will certainly still be delicious! If you want to change the flavor of the stuffing, here are some suggestions: 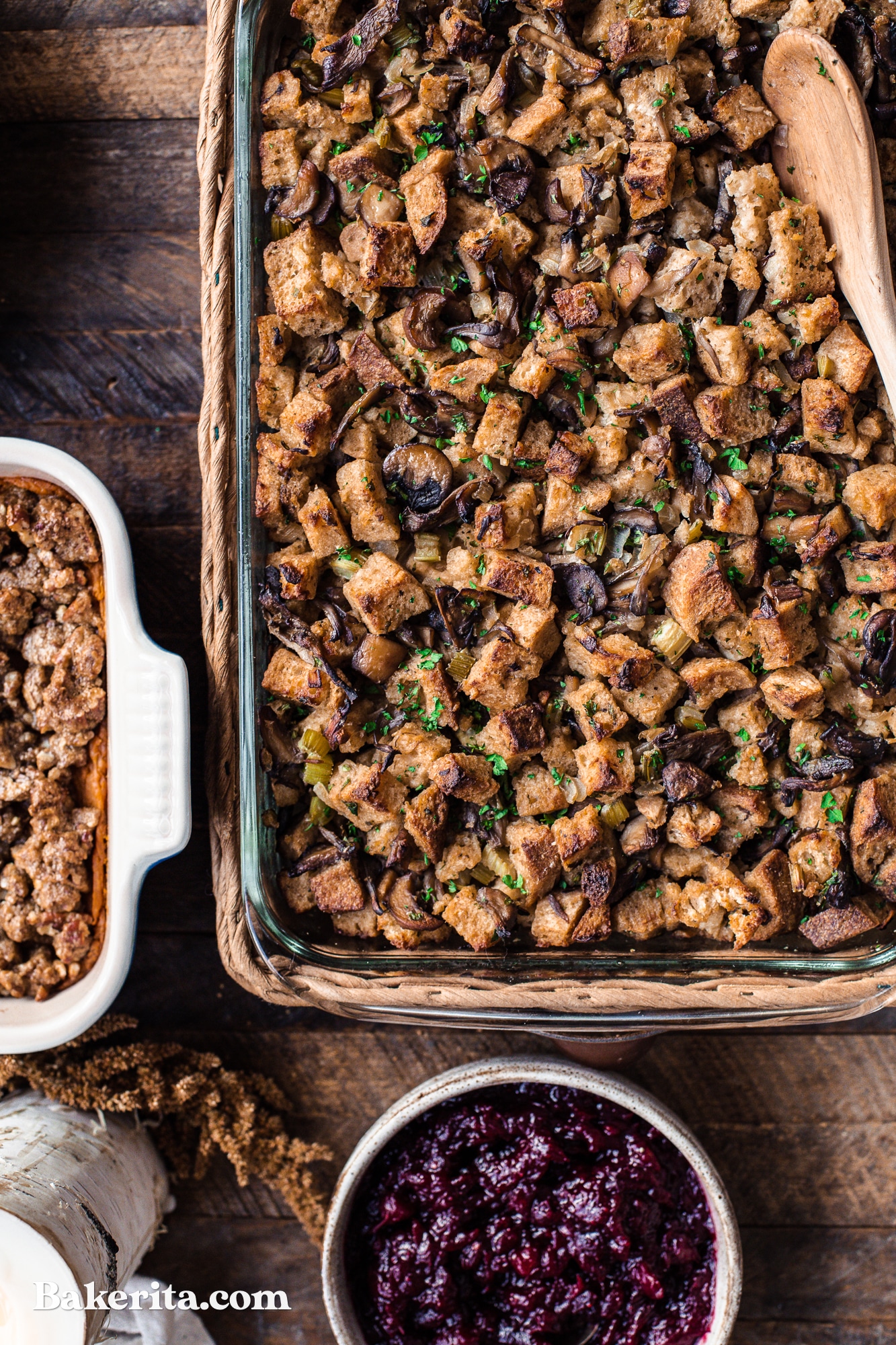 For the rest of your Thanksgiving Menu:

This Vegan Mushroom Stuffing is loaded with wild mushrooms, onions, sage, and thyme, for a fantastic holiday side dish that your whole family will love. This easy stuffing recipe can easily be made into a gluten-free stuffing, as well. 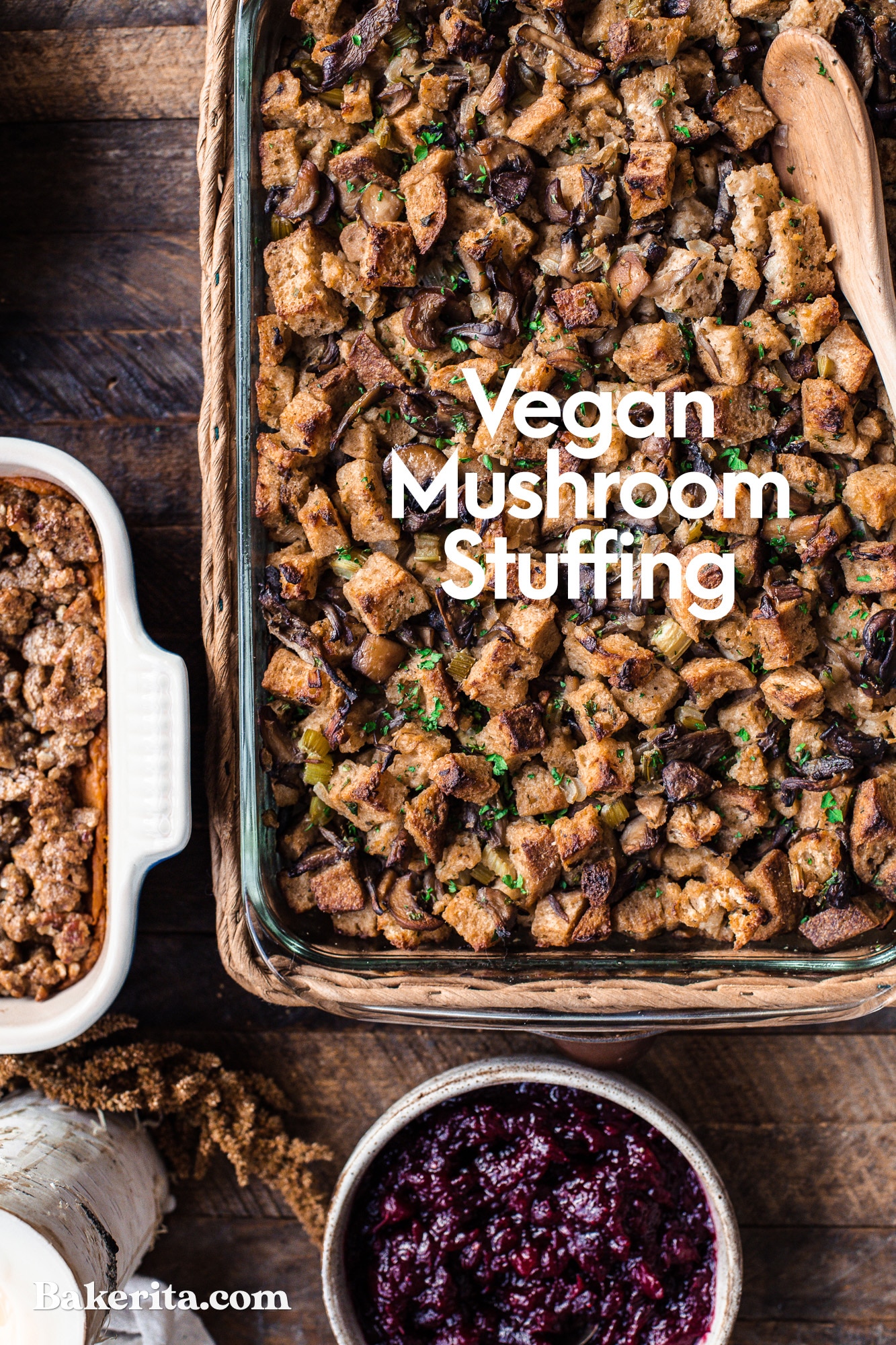 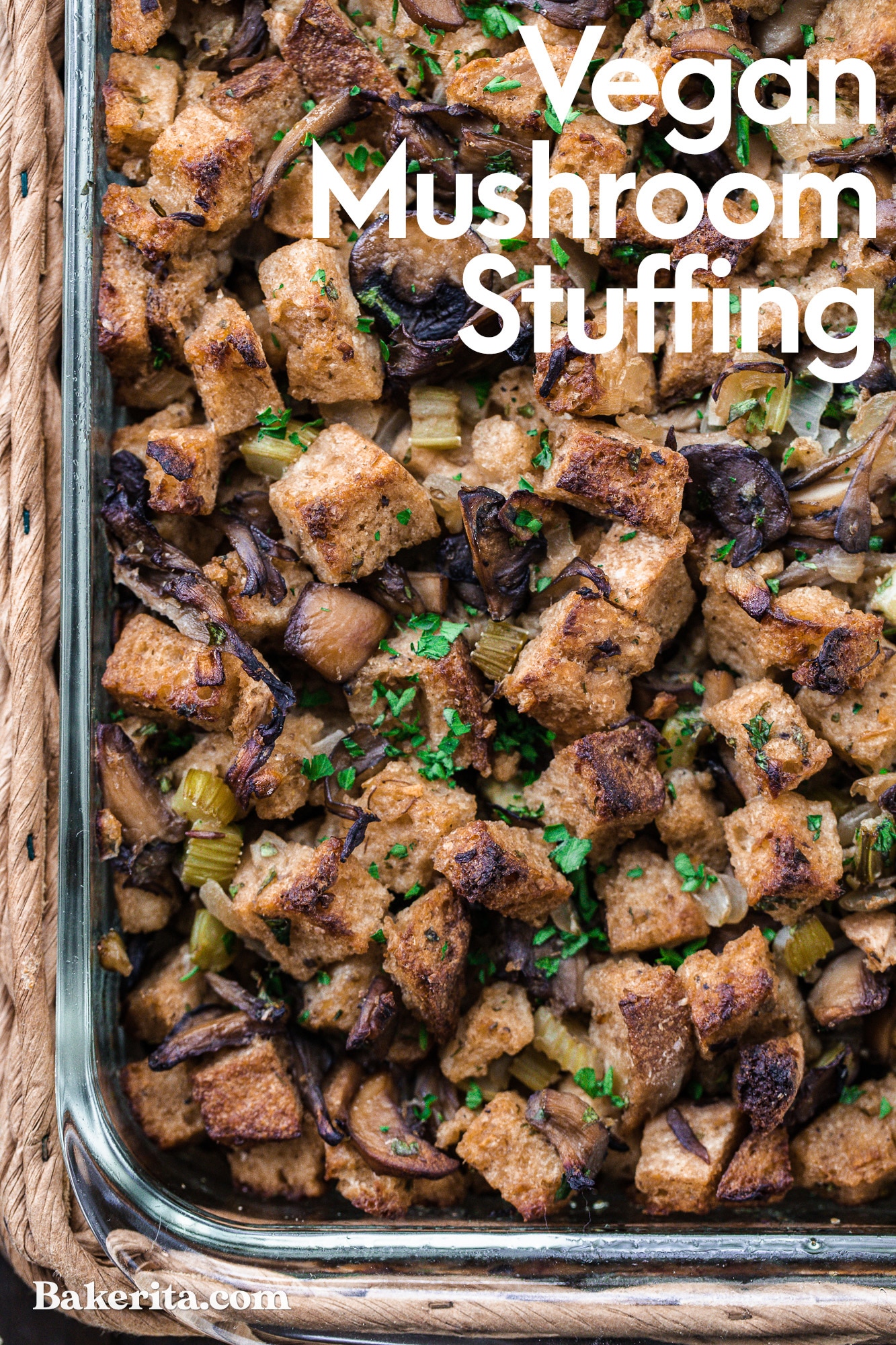 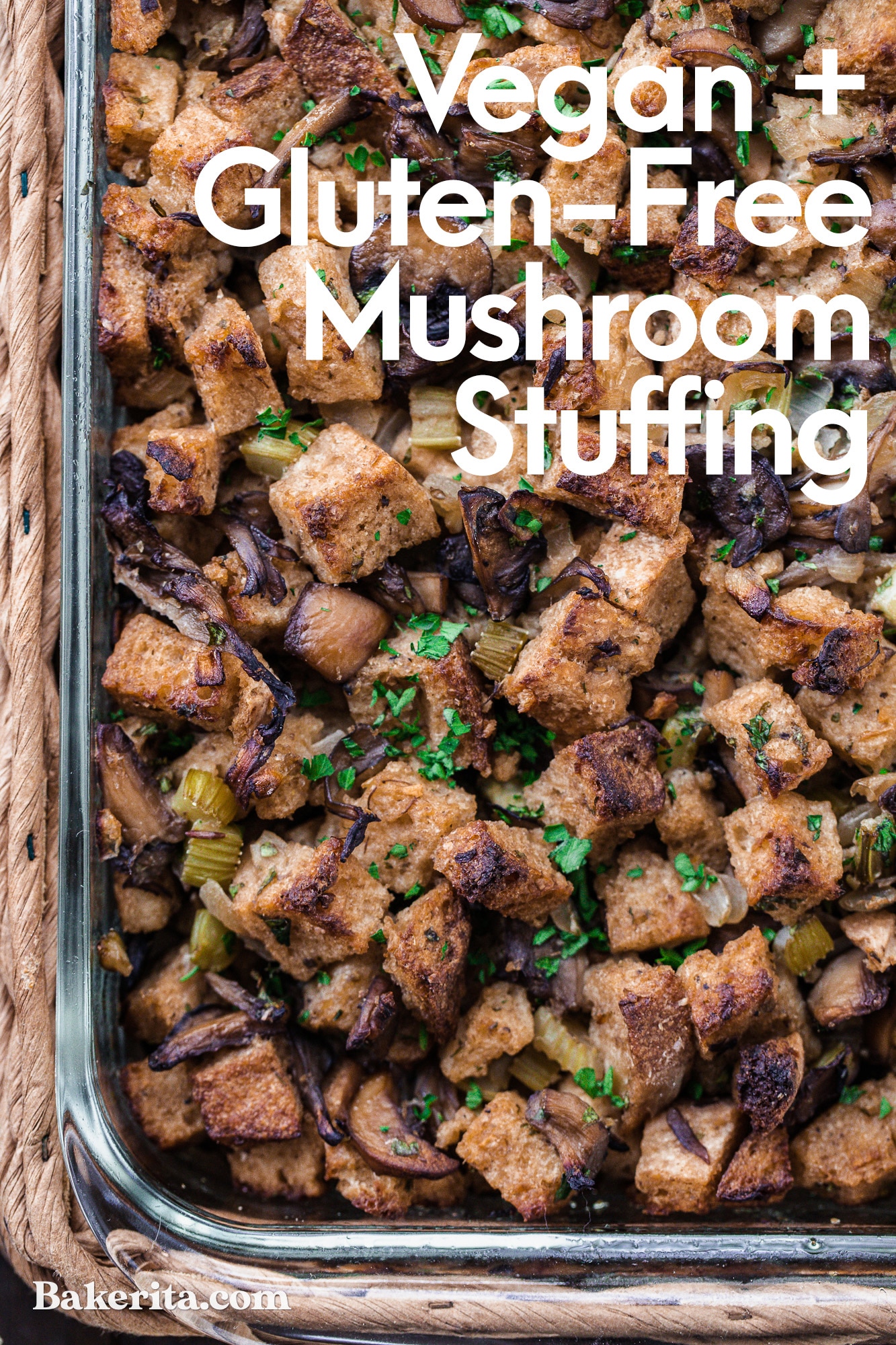