This Raspberry Almond Butter Smoothie Bowl is a creamy, sweet breakfast treat that can be made in just a few minutes and is begging to be loaded up with all of your favorite toppings! You’d never guess there was a hidden veggie in there, too. This post is sponsored by Silk. 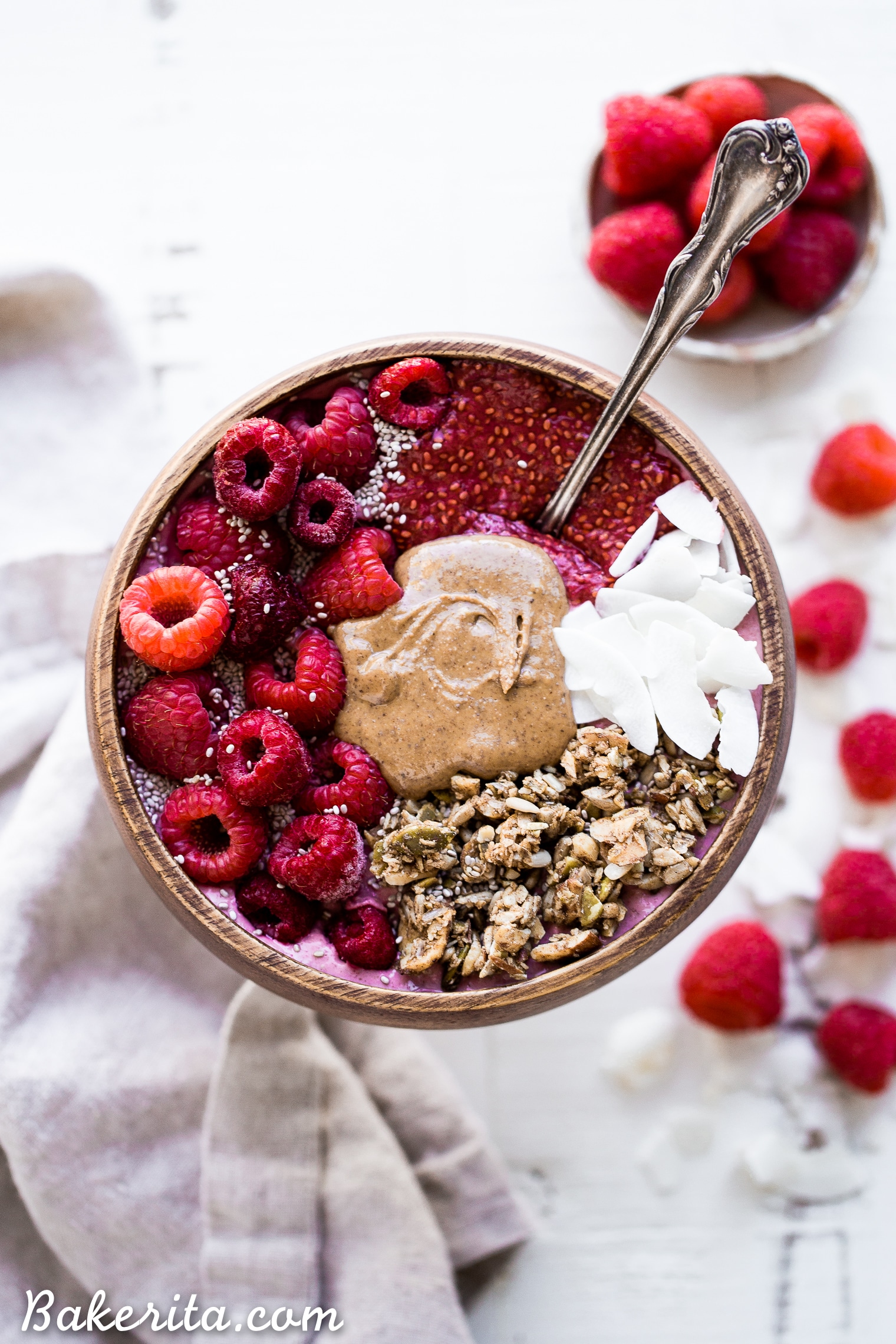 So if you follow me on Instagram (which hopefully you do – if not, click here to go to my page and give a follow if you like whatcha see 😉), you probably saw me doing some polls on my stories lately to see what kind of recipes YOU guys want.

I asked a whole bunch of questions and got a whole bunch of answers, so THANK YOU if you gave me some insight, because getting responses from you guys helps me curate my content to be exactly what you’d like it to be! The responses I got help me to have a better idea of the kind of recipes that make you guys giddy. 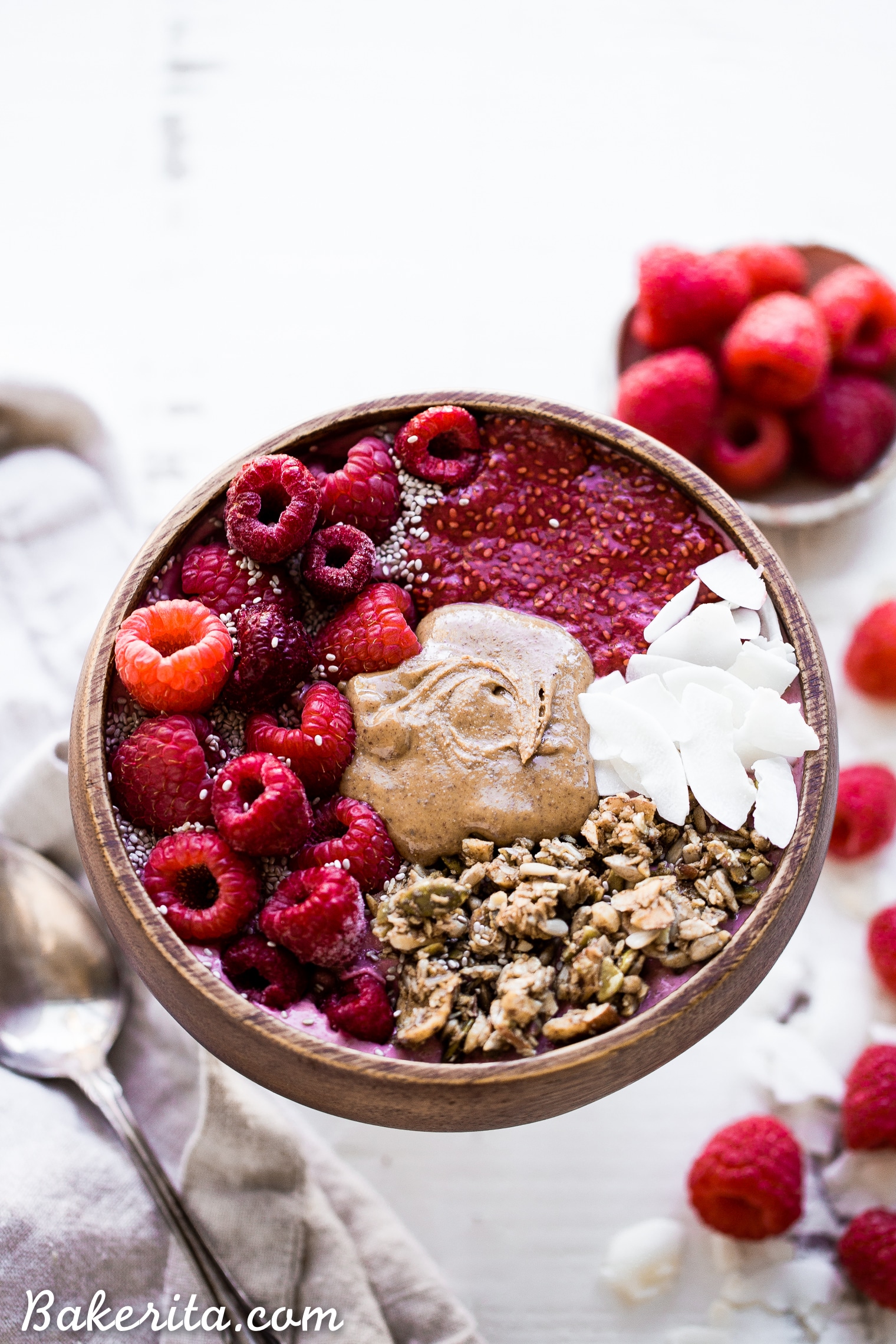 One of those kinds of recipes? SMOOTHIE BOWLS. Tons of you have been asking for some new smoothie bowl recipes (in addition to the tons I’ve already got posted!) and who am I not to oblige that request?! Especially since they’re so easy and so delicious.

Since it’s getting warm again here in San Diego (not that it really ever got cold…), I thought it was time to start smoothie bowl season around here once again. The star of the show this week? 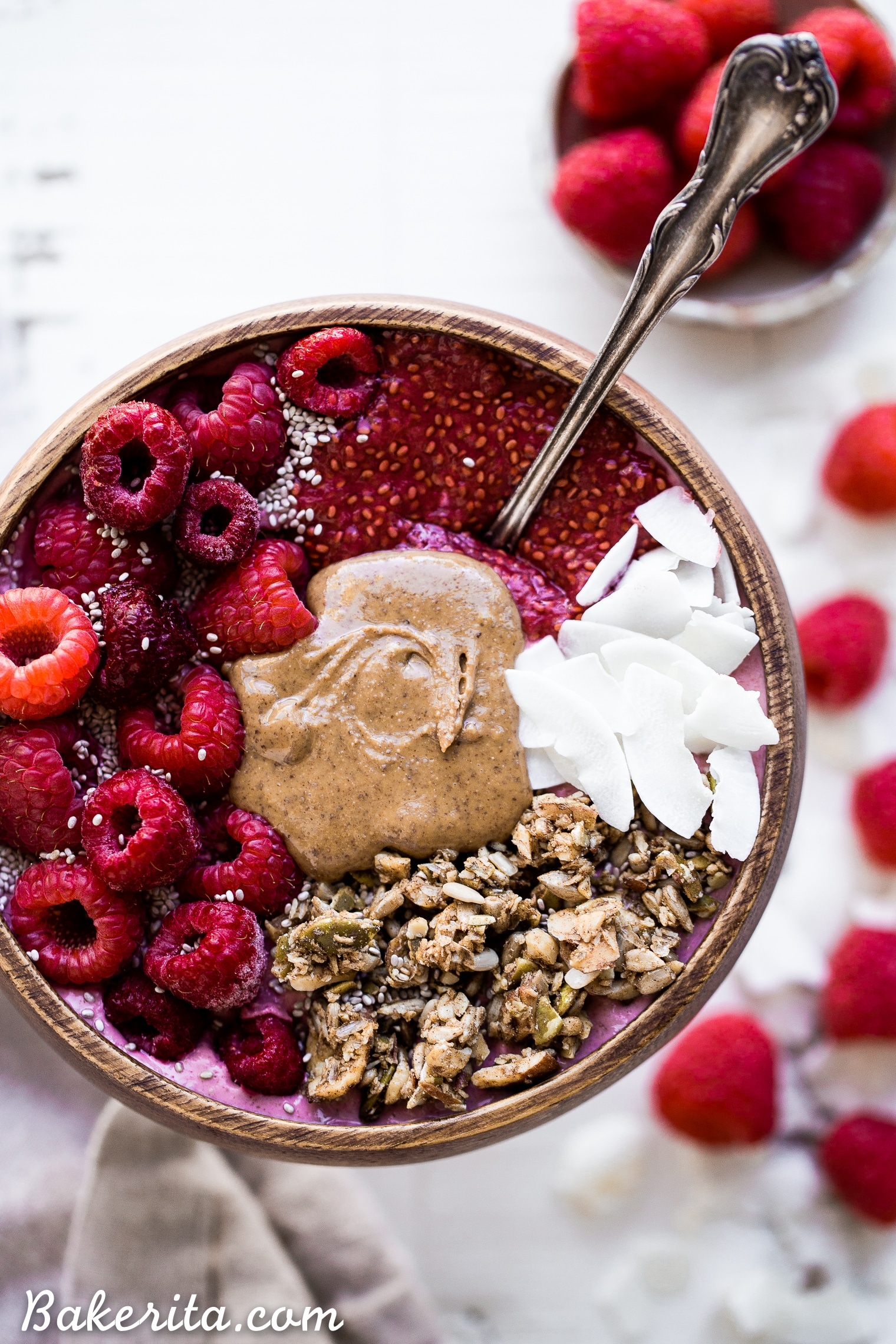 This raspberry almond butter smoothie bowl, like all my others, comes together quickly and easily with just a handful of ingredients. Obviously among them are a bunch of frozen raspberries and a hearty scoop of almond butter. 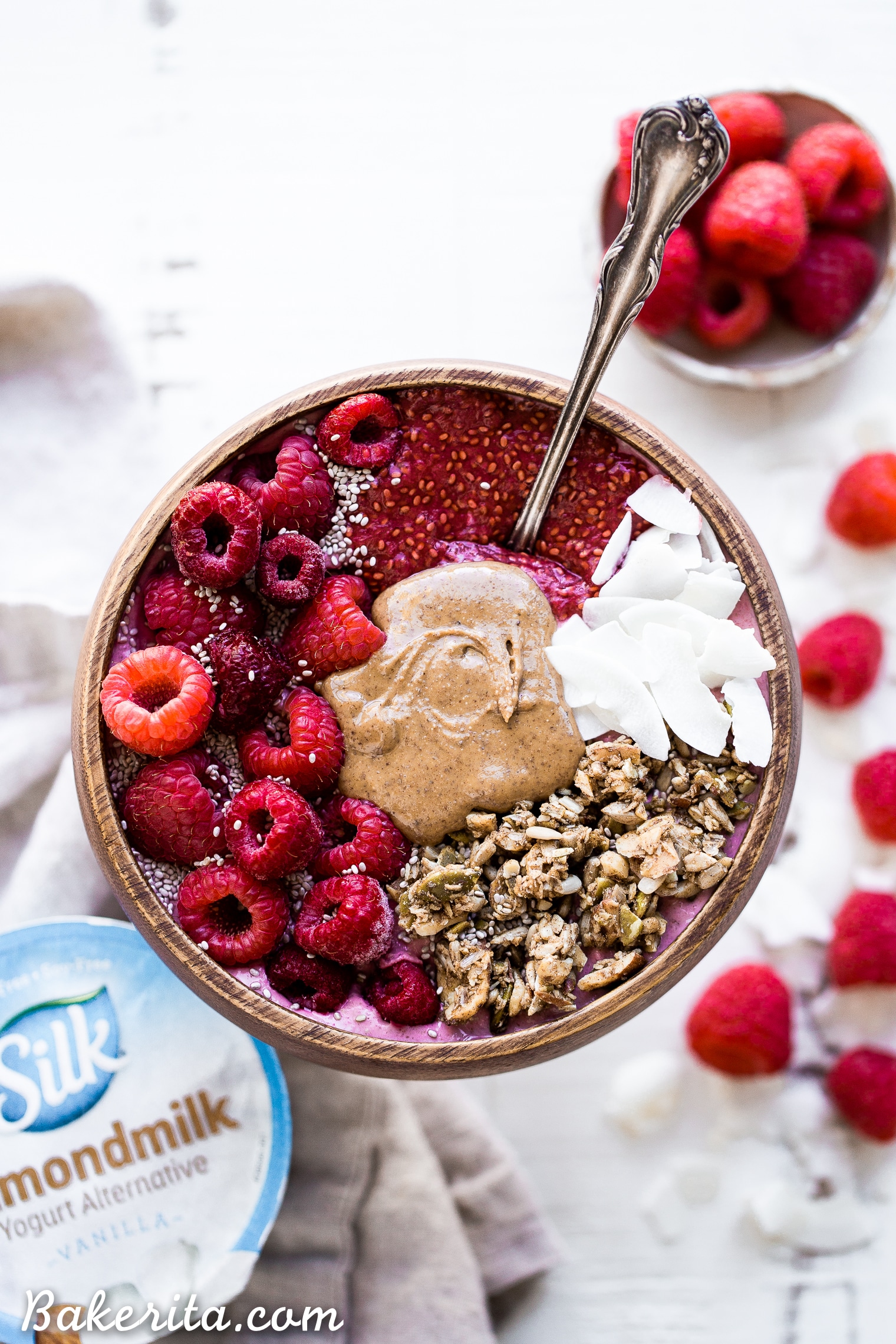 Also in the mix? A frozen banana, for some sweetness, and steamed then frozen cauliflower, which adds some secret veggies to your breakfast! The cauliflower adds some extra creaminess and bulk without any additional sugar. To help everything blend nice and smooth, I added Silk Almondmilk Yogurt Alternative.

I used the vanilla flavor, and by adding the yogurt alternative instead milk, it helps keep everything super creamy and thick and doesn’t thin the smoothie bowl out too much the way dairy-free milk can do. Each single serve cup also has 5-6 grams of protein from California almonds – score! 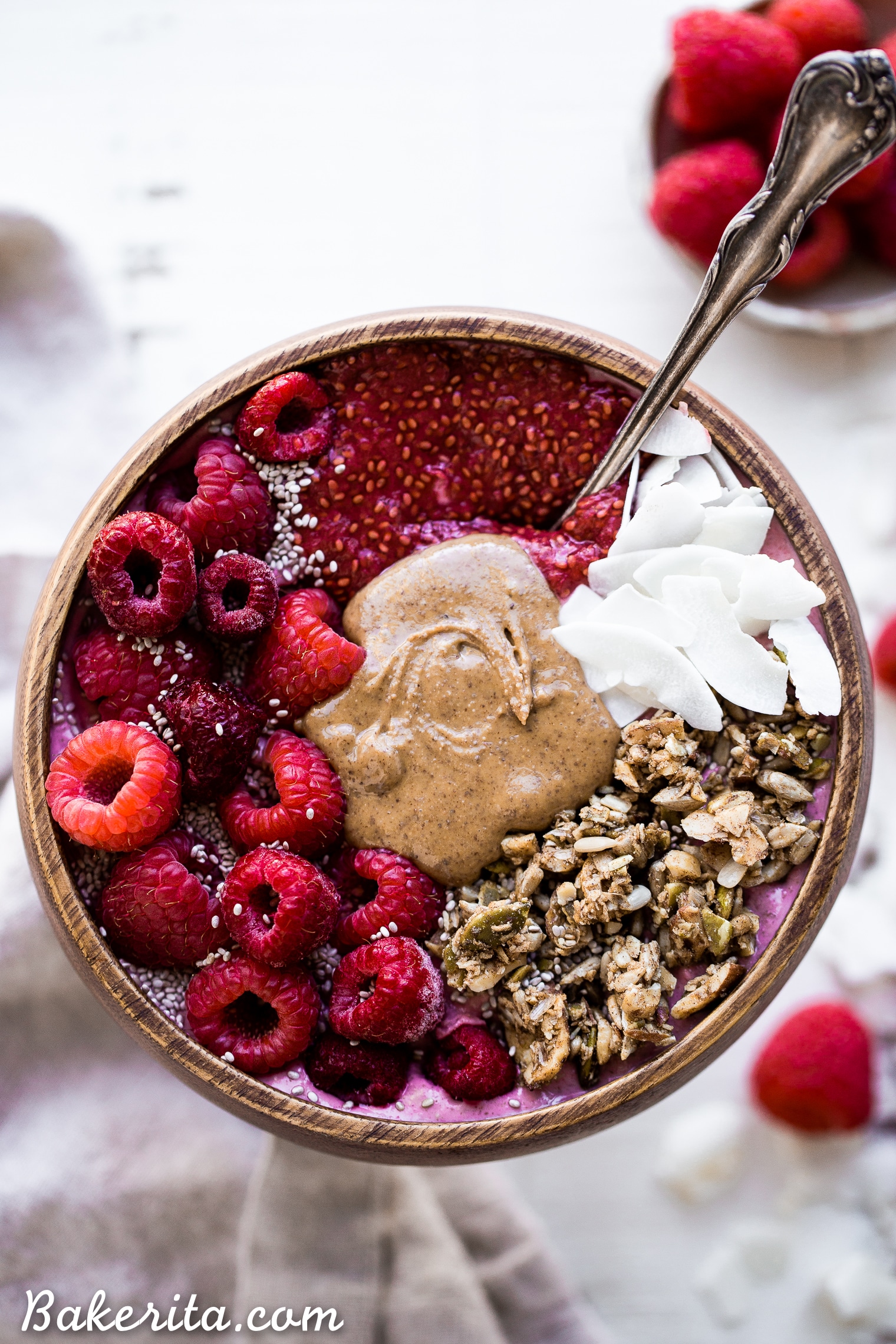 This Raspberry Almond Butter Smoothie Bowl is definitely making its way into the breakfast rotation! I might try peanut butter next time for a PB&J sort of situation 😏 enjoy!!

This Raspberry Almond Butter Smoothie Bowl is a creamy, sweet breakfast treat that can be made in just a few minutes and is begging to be loaded up with all of your favorite toppings! You'd never guess there was a hidden veggie in there, too.
Course Breakfast
Cuisine American
Prep Time 5 minutes
Total Time 5 minutes
Servings 1 serving
Calories 353 kcal
Author Rachel

This is a sponsored conversation written by me on behalf of Silk. As always, all text opinions are completely my own. Thanks for supporting the brands that support Bakerita! You can find Silk’s Dairy-Free Almondmilk Yogurt Alternative using this store locator and get a coupon here.