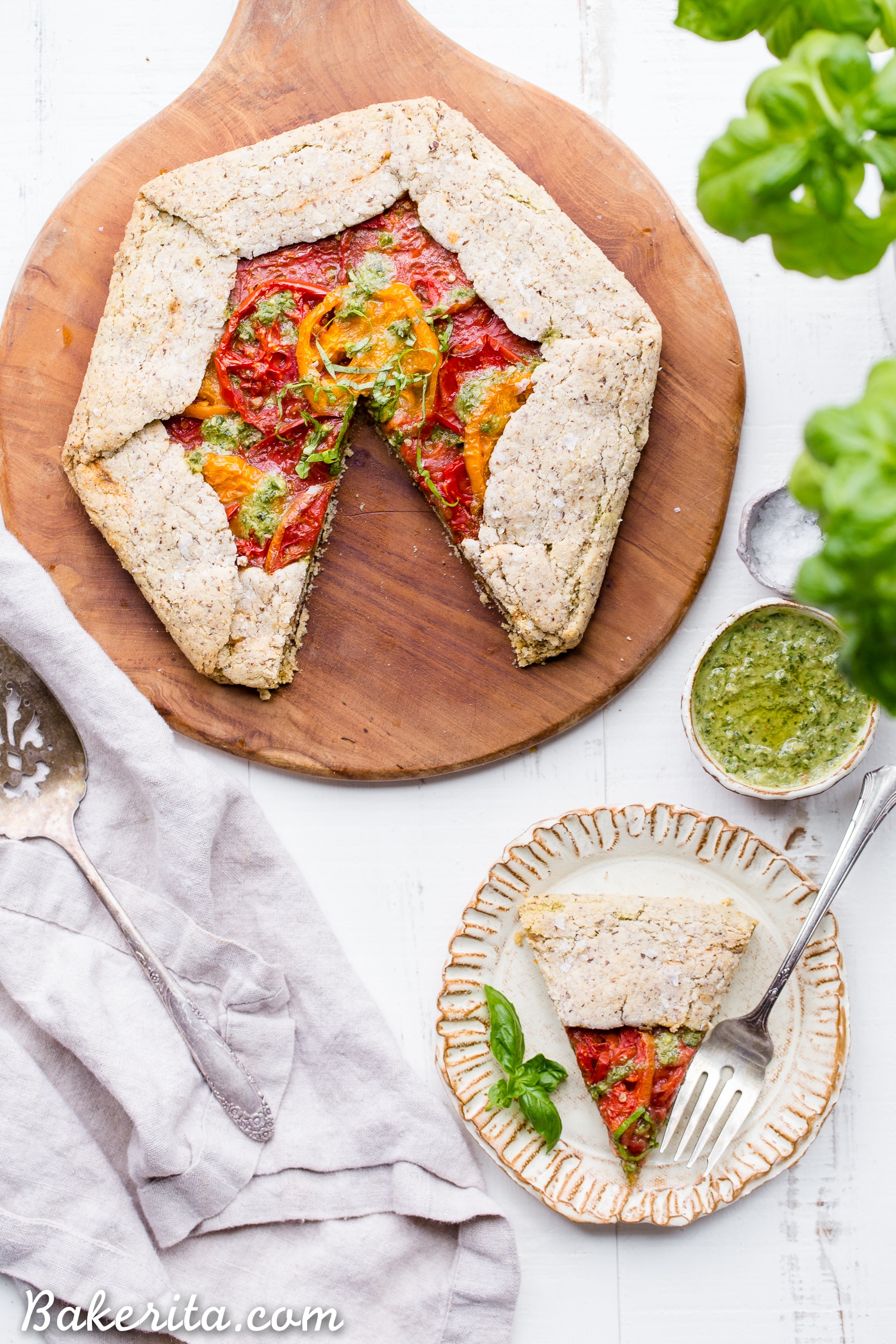 I’m clinging onto summer with this recipe – I had to sneak one more in before the inundation of all things pumpkin spice, apples, and caramel. Not that I’m not excited for that, but heirloom tomatoes are still very much in season in this Indian Summer we’re (always) experiencing in San Diego and it was a tragedy that they had not yet worked their way into a recipe this season.

So, I’m remedying that. In an incredibly delicious way. I’m hoping you’ll love it as much as I do, so make sure you go out and grab some of the most beautiful heirloom tomatoes that you can find as soon as possible because you don’t want to let this one slide. 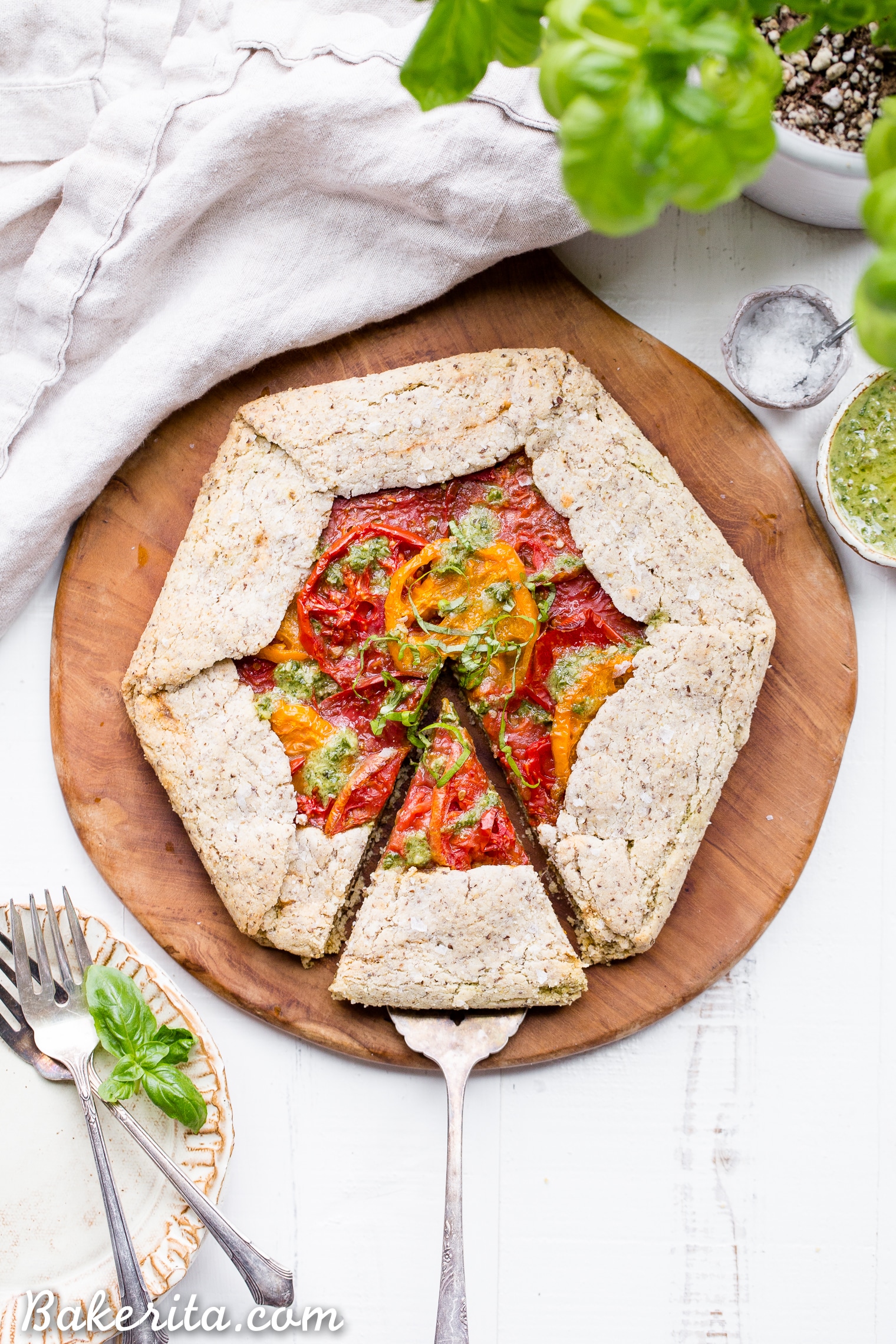 Galettes are one of my favorite things to make, but a lot of people don’t know what they are. I like to describe them as a lazy person’s pie – no pie tin necessary, and no struggling to get a slice out of the pan. There’s also lots of crust, which I’m alllll about, especially when it’s as flaky and delicious as this crust is.

The crust for this pesto tomato galette is made with a combination of almond flour and tapioca flour, which combine to create a light, flaky, delicious texture. I added some nutritional yeast and salt for flavor, and those two ingredients almost make the crust taste like it has some Parmesan in it. 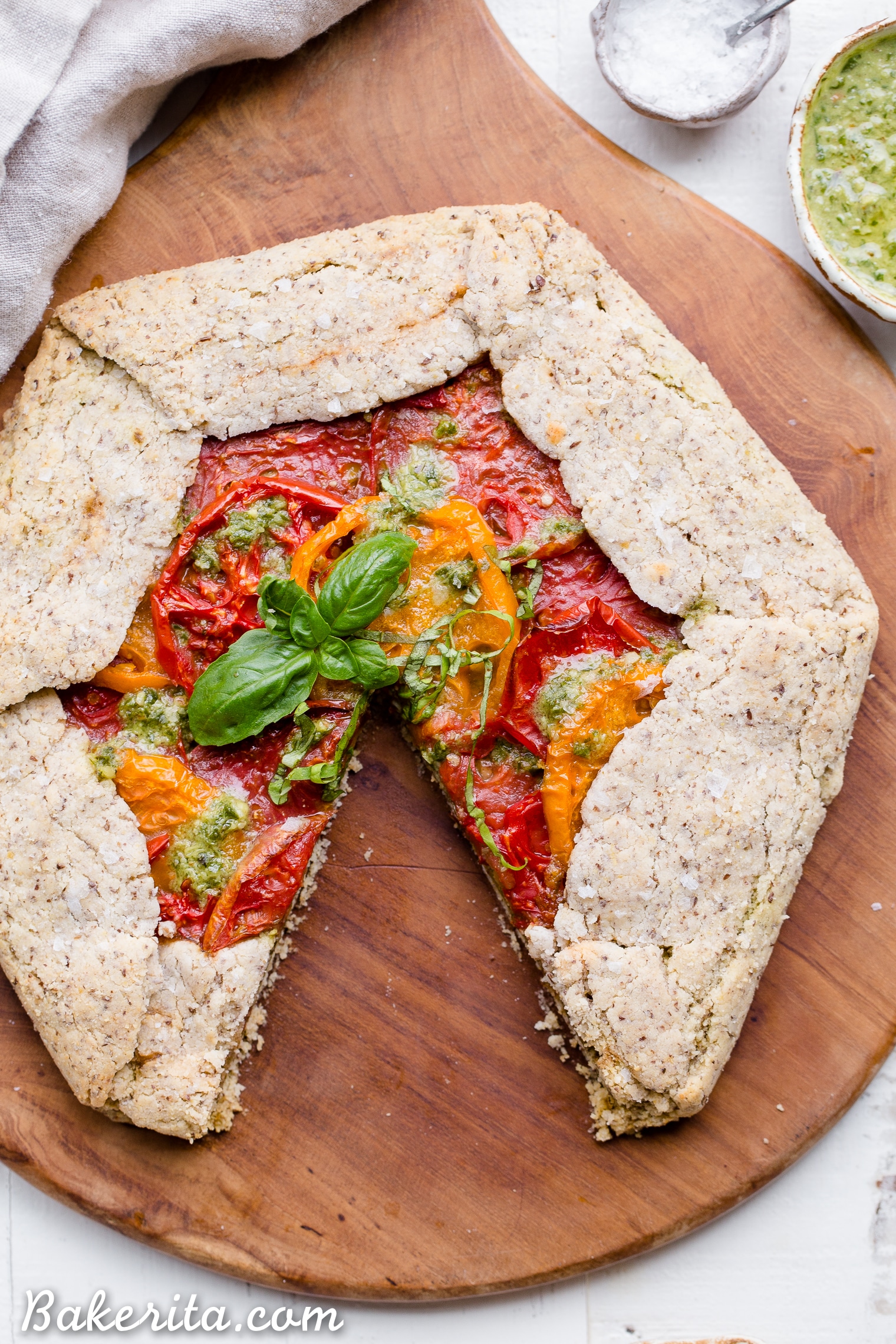 We’ll work in coconut oil to give the galette crust flakiness, and then bring it all together with cold water. I roll the crust out immediately. There is no need to chill it in the fridge! Once it’s chill, time to layer on all the savory summer goodness.

I make my own pesto most of the time and I’ve provided the recipe I use here. It’s pretty simple and super delicious. You can also use storebought pesto if you’d prefer, or if don’t have all the ingredients on hand to make your own. If you make my recipe, you’ll have some extra to put on anything (and everything) that you like. 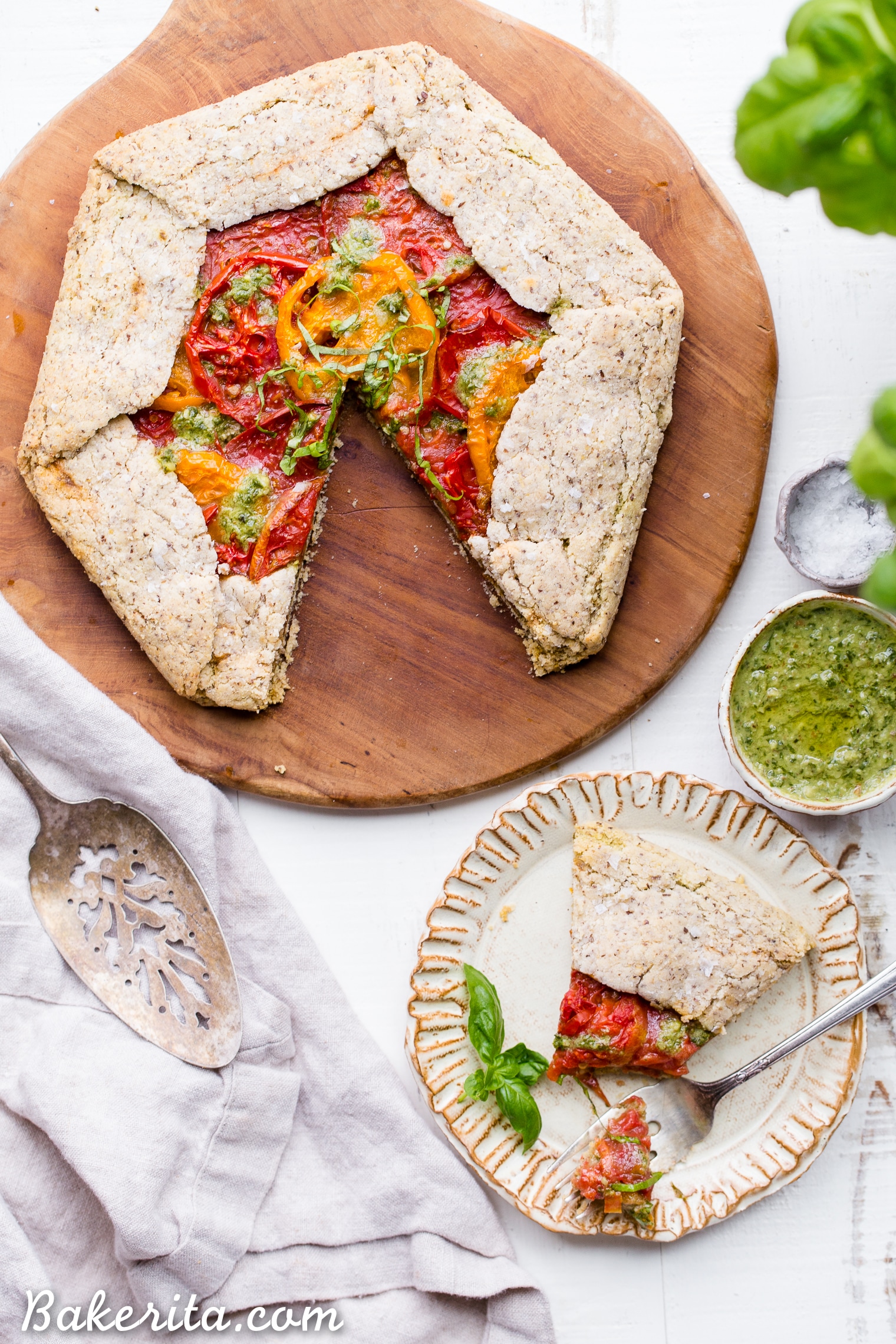 We slather the galette with fresh pesto, leaving a little room around the edges to fold the dough up. Then, we’ll layer thick slices of beautiful, juicy heirloom tomatoes on top, overlapping each other slightly. Then we’ll fold up the dough, brush it with olive oil and sprinkle with flaky salt. Finally, you’ll bake the whole thing until golden brown.

Once out of the oven, I like to drizzle with some more pesto and serve it warm. I find it’s best when served fresh. However, you can also store it in the fridge and reheat in the toaster oven, regular oven, or microwave. 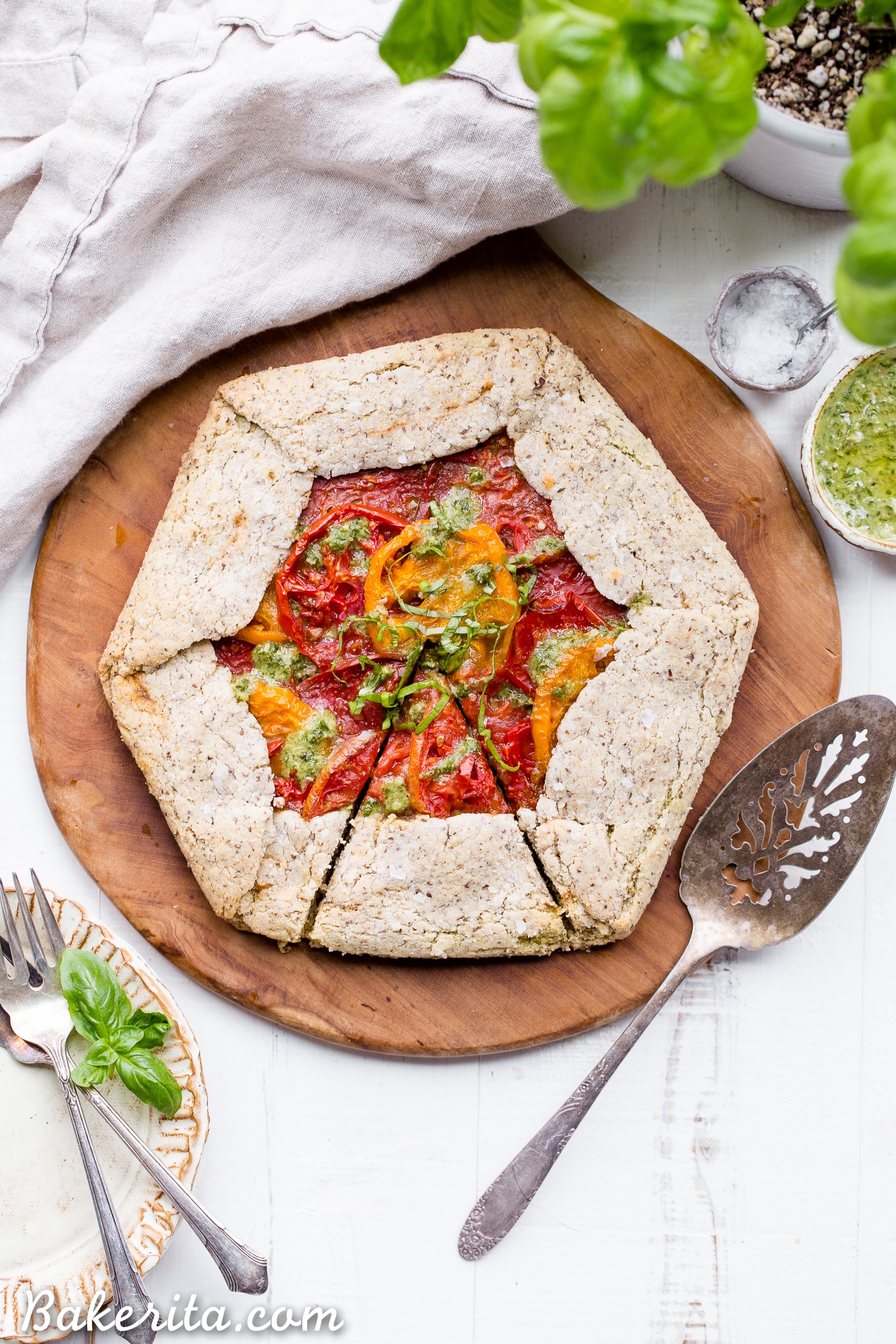 I (somehow) still had some of this Pesto Heirloom Tomato Galette left about 5 days after I made it and it was STILL good. To be honest, I doubt it’ll last that long in your house. It only lasted so long in mine because I’ve been sick and not eating ALL THE THINGS for once.

I hope you’ll embrace one of these last summer recipes before we delve into all the fall goodness! It’s truly one of my new faves. I love you guys so much and hope you enjoy!!! 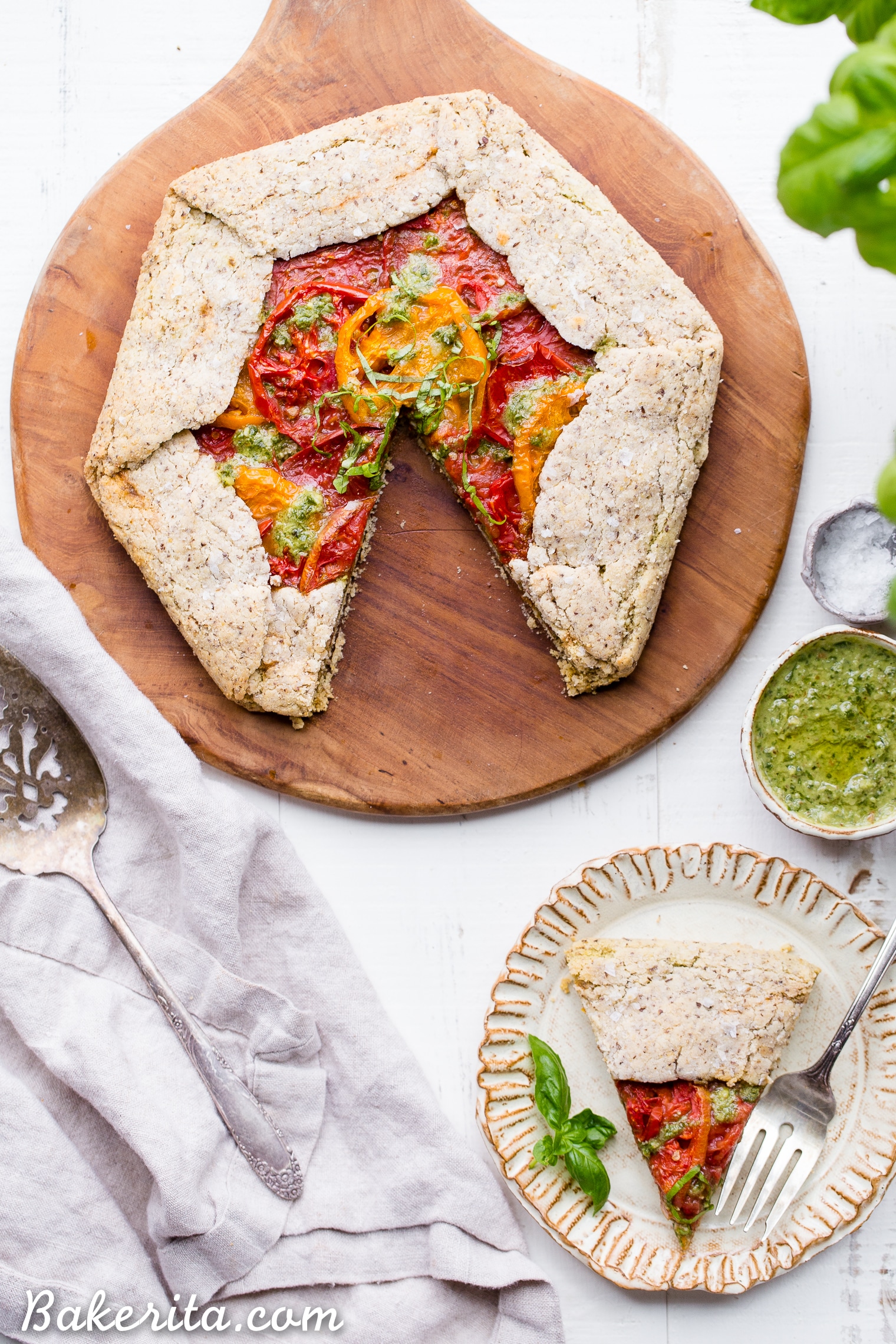 Loving this tomato galette? Try some other favorites:

APPLE CRISP 🍏❤️✨ for the apple lovers, or

is there anything better than a slice of warm corn

question: PUMPKIN 🎃 or APPLE 🍎?! not going

Hi you! I missed ya. ❤️ My break lasted longer