These Cinnamon Fig Chia Pudding & Overnight Oat Breakfast Parfaits are a delicious make-ahead breakfast that you’ll love to have ready to go in your freezer! The fresh figs are such a scrumptious and beautiful treat in this gluten-free, refined sugar-free, and vegan breakfast. 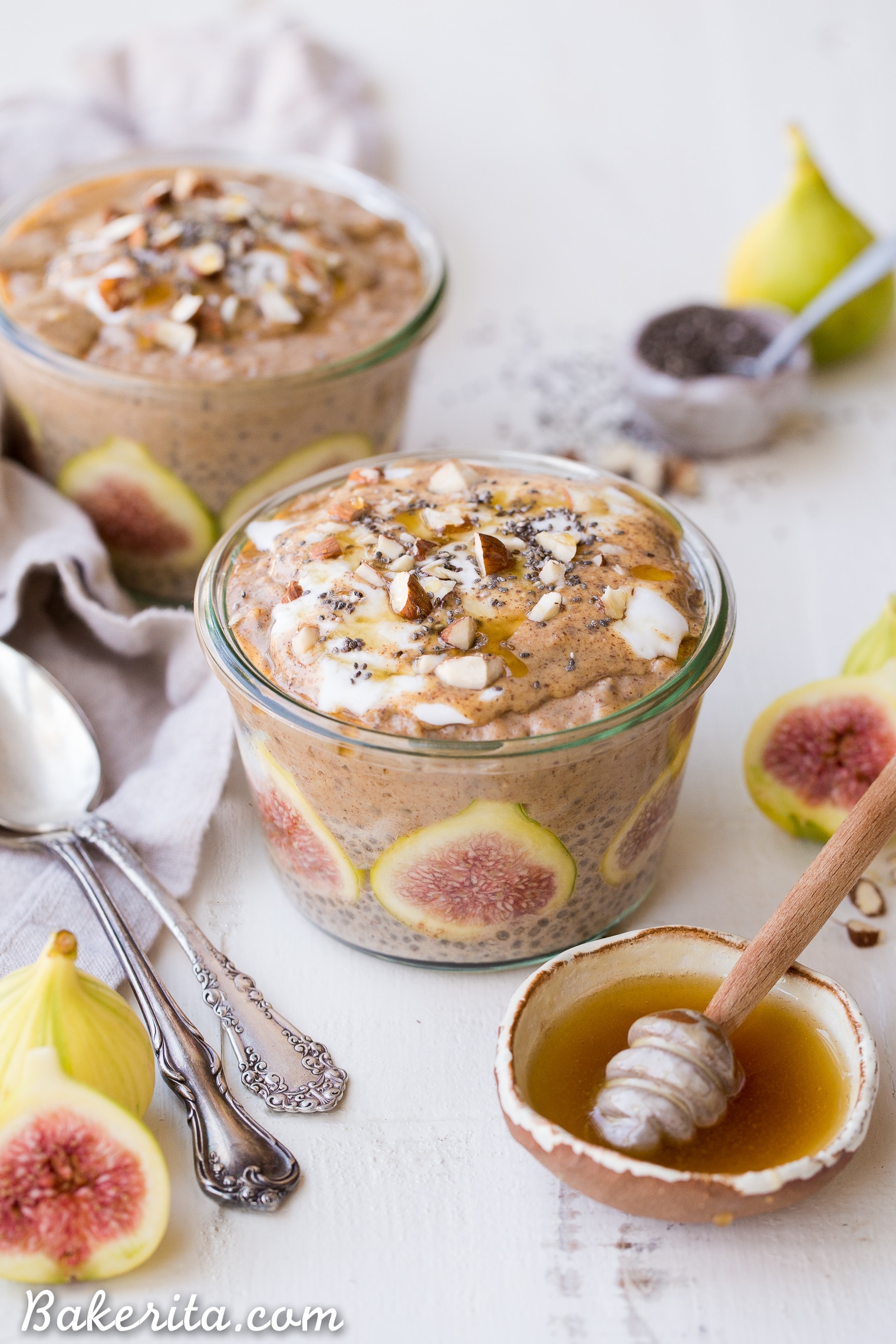 I’m not sure when the first time I had a fig was, but it certainly wasn’t memorable, because I can’t remember ever having them before last year…except in Fig Newton form. It just wasn’t a fruit my parents bought, and the season comes and goes so quickly that they always flew under my radar.

This year though? I’ve been going crazy for them – they’re so beautiful and delicious. Figs sliced up with nut butter has been a go-to snack for me lately. I love them with peanut butter or almond butter or just on their own. So heavenly. 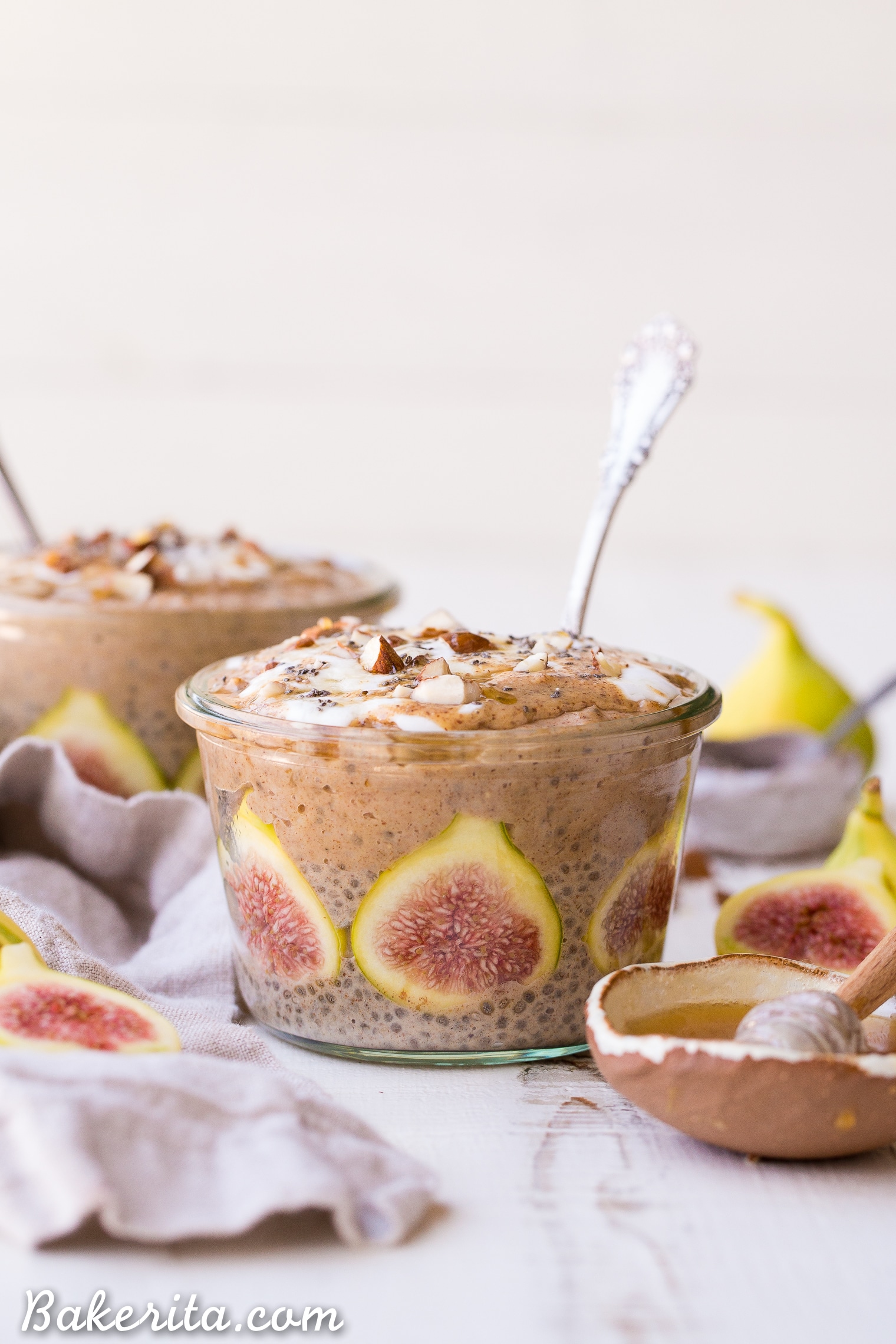 I’ve been adding figs to my usual oatmeal bowls but thought they deserved to star in their own breakfast meal. Preferably in a way that would allow their beauty to shine…so parfaits came to mind. Parfaits are like the supermodel of breakfast food – total showoffs with their exposed, beautiful layers. ~swoon~

So breakfast parfaits it is! You do have to make overnight oats and chia pudding, but all that is required is simply stirring/blending things together, transferring to a jar, and letting the magic happen while they chill out in the fridge to absorb. 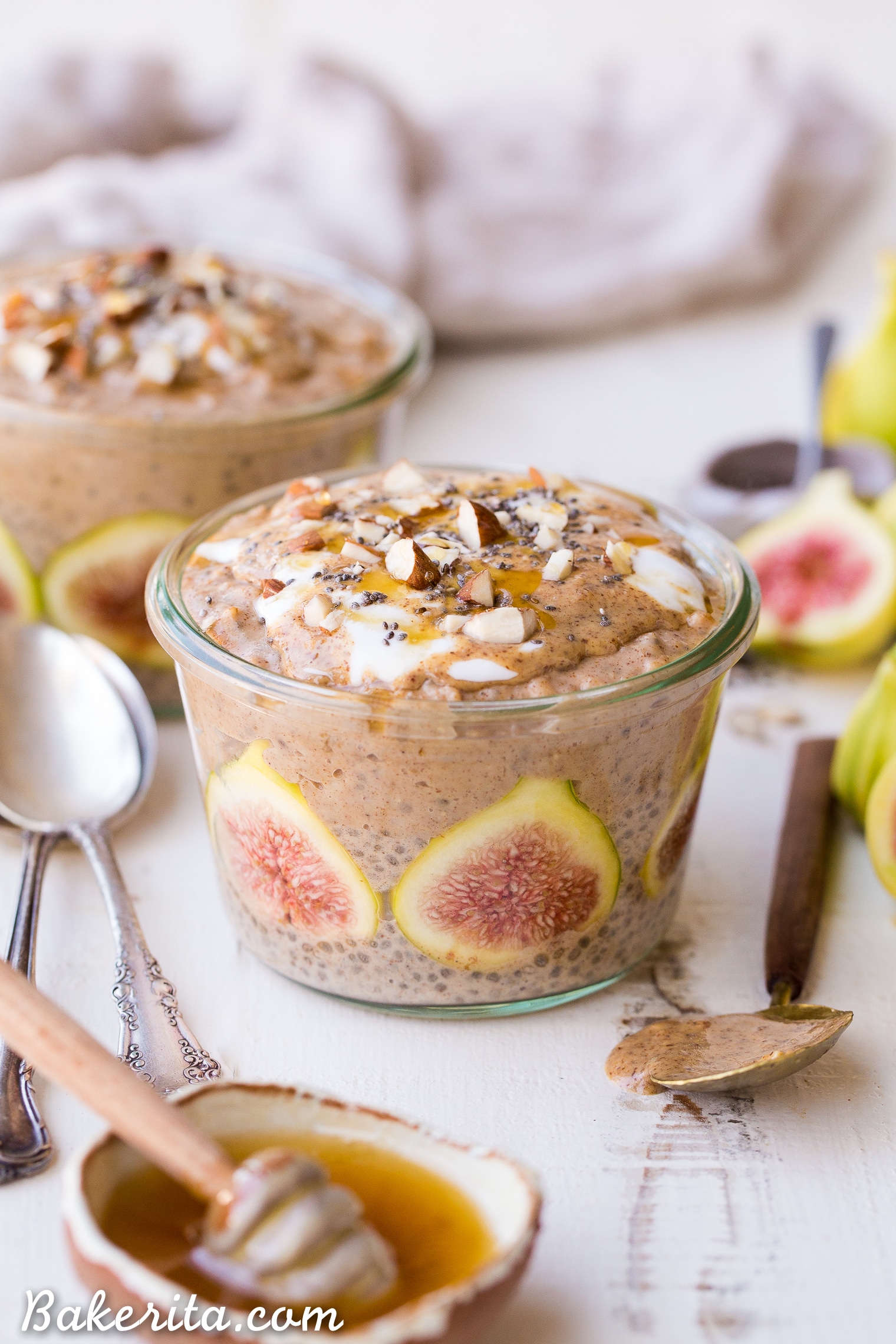 Once it’s all absorbed, layer all that goodness with figs, almond butter, chia seeds, and coconut yogurt (or whatever toppings/fillings you’ve got and are calling out to you…granola would be good, along with all the other fruits or nut butter that your heart desires). 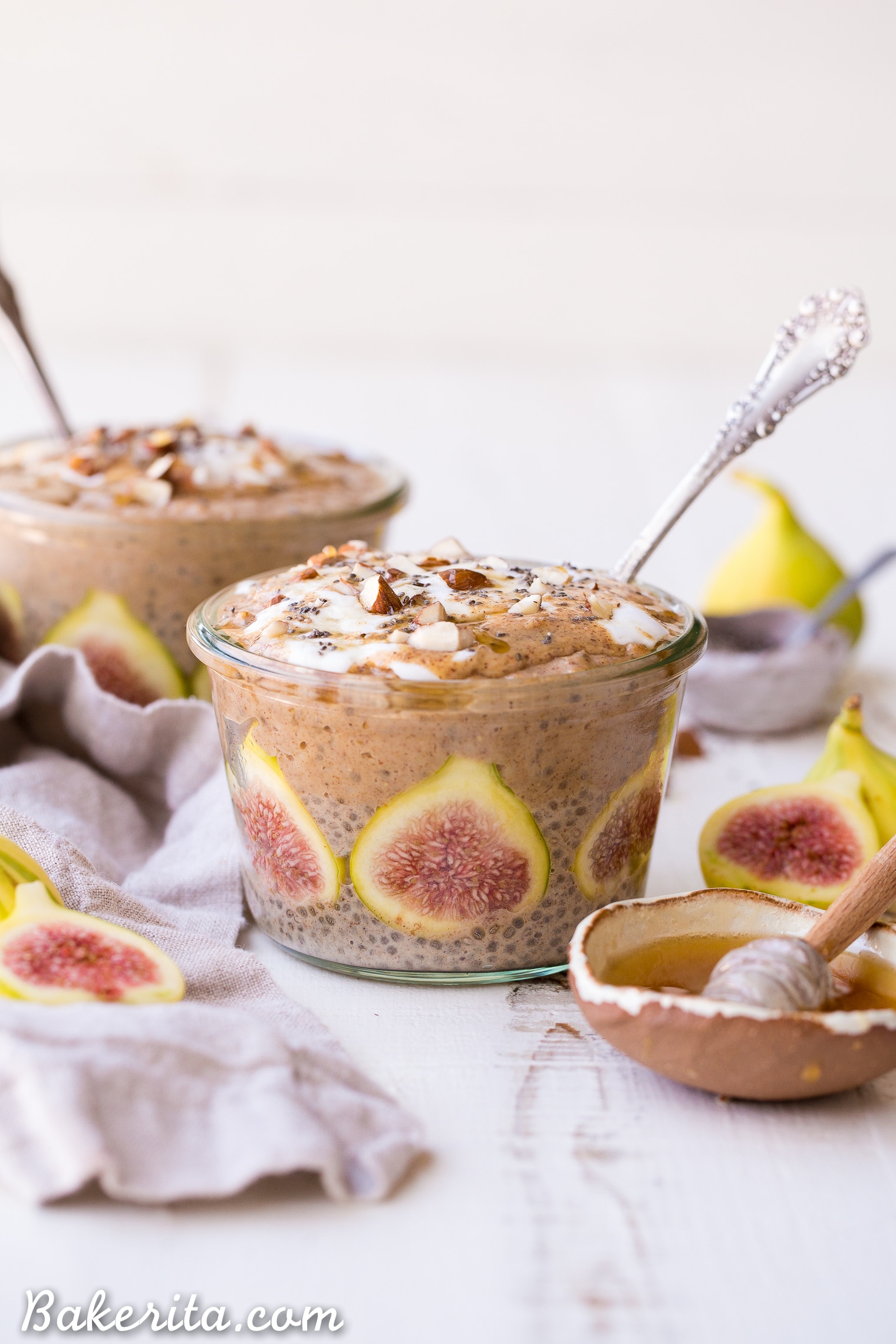 Then, your breakfast parfaits are ready to eat, or store in the fridge for up to a week! They are the perfect make-ahead breakfast and it is SO filling and incredibly tasty. The fresh figs paired with the almond butter and cinnamon is the perfect fall breakfast. I preferred eating it chilled because it’s been so hot here, but you can also warm it up in the microwave if you prefer.

Either way, it’s so tasty! Hope you’ll give it a go before figs disappear for the year, and enjoy! :) xoxox 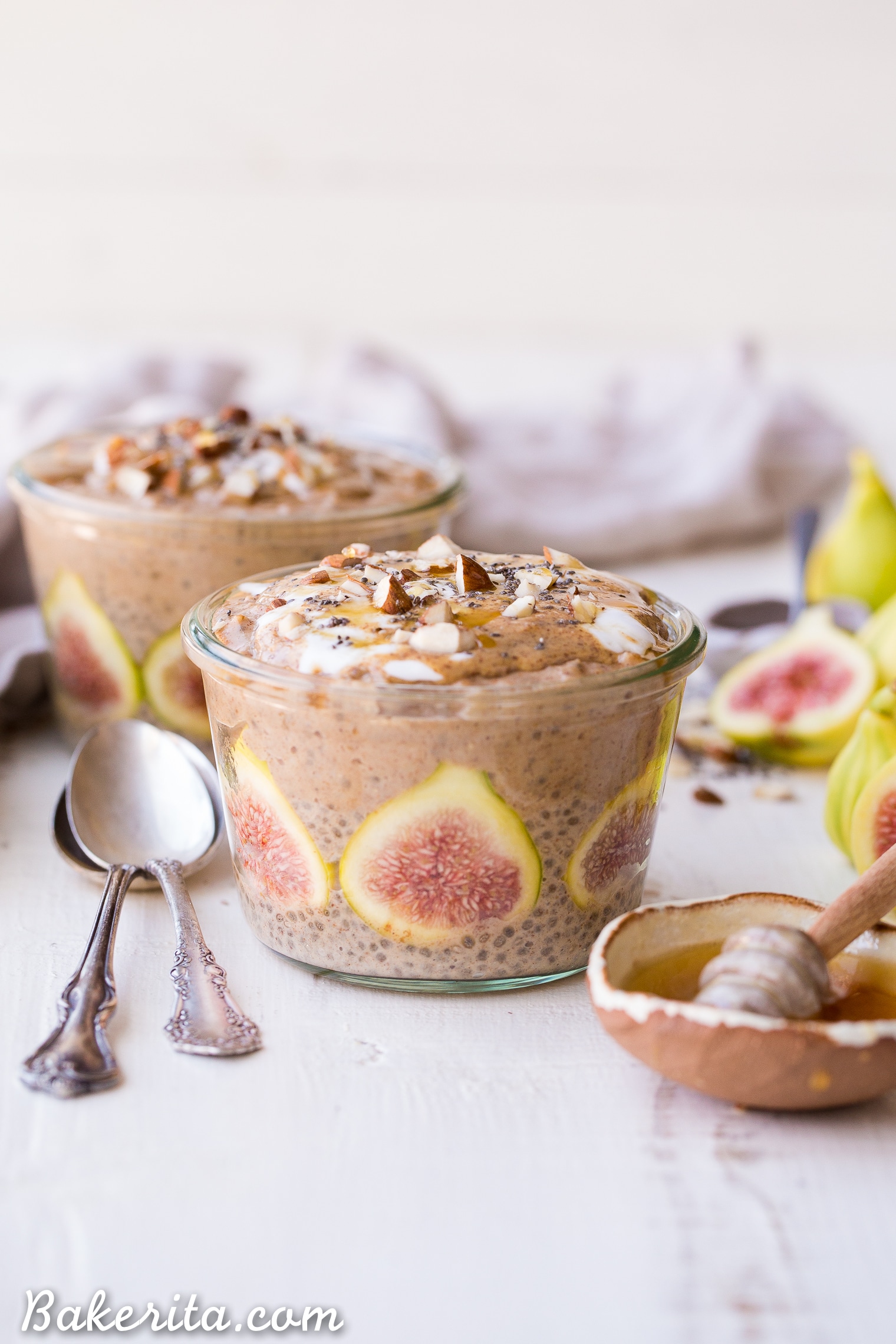 These Cinnamon Fig Chia Pudding & Overnight Oat Breakfast Parfaits are a delicious make-ahead breakfast that you’ll love to have ready to go in your freezer! The fresh figs are such a scrumptious and beautiful treat in this gluten-free, refined sugar-free, and vegan breakfast.

For the chia pudding

For the overnight oats

For the chia pudding

For the overnight oats