This Paleo Pecan Pie is a healthier version of a holiday favorite! This recipe is a gluten-free & grain-free alternative to traditional pecan pie with the best Paleo pie crust I’ve ever tried. This is the perfect paleo Thanksgiving dessert. 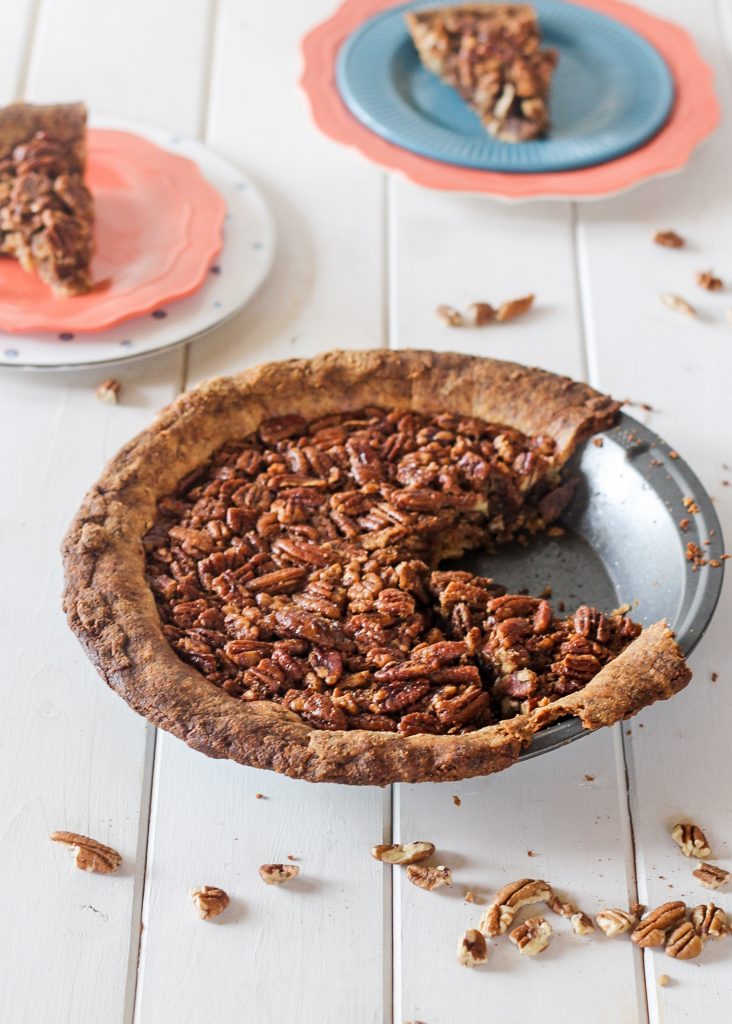 Phew, just barely sneaking in one last Thanksgiving recipe before the big day. This is a good one though, so listen up: I took a super guilty, sugar-free favorite and I made it way more guilt-free. This pie proves that pecan pie does not need corn syrup to be good. In fact…it’s way better without that nasty, overly-processed stuff.

Pecan pie is a favorite of mine and has been ever since this pecan pie recipe entered my life. It’s full of browned butter and brown sugar and tons of pecans. That recipe is absolutely delicious and is what this one is based on. However, that one, though corn syrup-free as well, is still full of sugar and definitely a sinful treat. 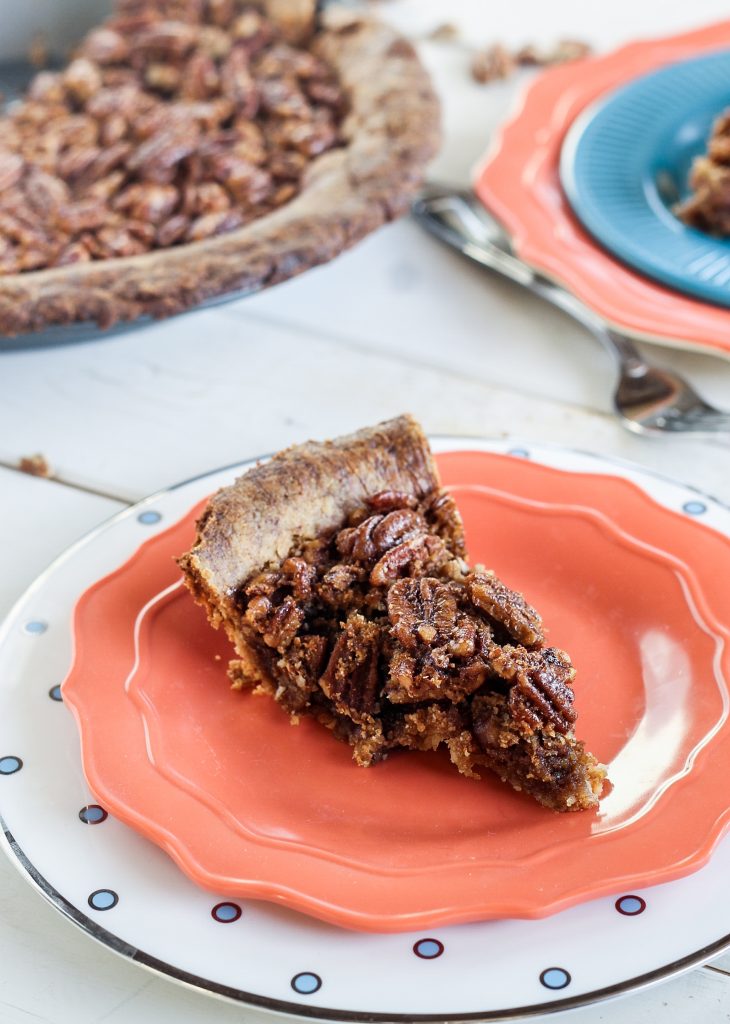 How is this Paleo Pecan Pie healthier?

This version of pecan pie went totally Paleo, nixing the gluten, grains, refined sugars, dairy, and butter, in favor of the more wholesome almond flour, coconut sugar, and coconut oil. The pie is still chockfull of pecans, and don’t worry – you won’t be missing that flaky pie crust either.

Perhaps one of the best things to come out of this recipe is this pie crust. I’ve been getting frustrated with Paleo pie crusts recently. I kept trying press in crusts, avoiding rolling out dough because it’s one of my least favorite kitchen tasks, but everything just tasted too chewy and burnt too quickly and just wasn’t right. 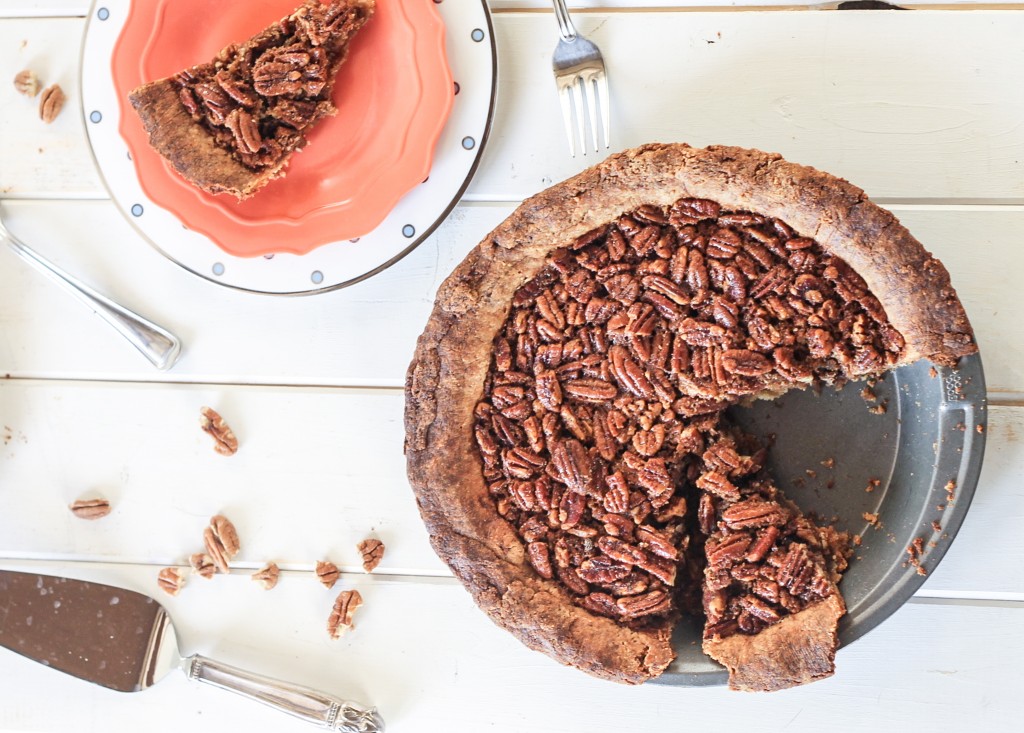 This time, though, I switched methods. To make this flaky crust, you’re going to use solid coconut oil and cut it into the almond flour, similar to what you’d do for normal pie crust with butter and flour. Then, you’ll stir in the egg to bring the dough together.

Next, the crust will chill in the freezer to re-solidify the coconut oil, creating that flaky texture we all love. I rolled it out between parchment sheets, making it super easy to transfer to the pie pan and nixing the need for any extra flour.

This is a pie crust I’ll be using again and again (in fact, I’m using it for more pies on Thanksgiving!). With this pecan pie filling, the combo is irresistible! 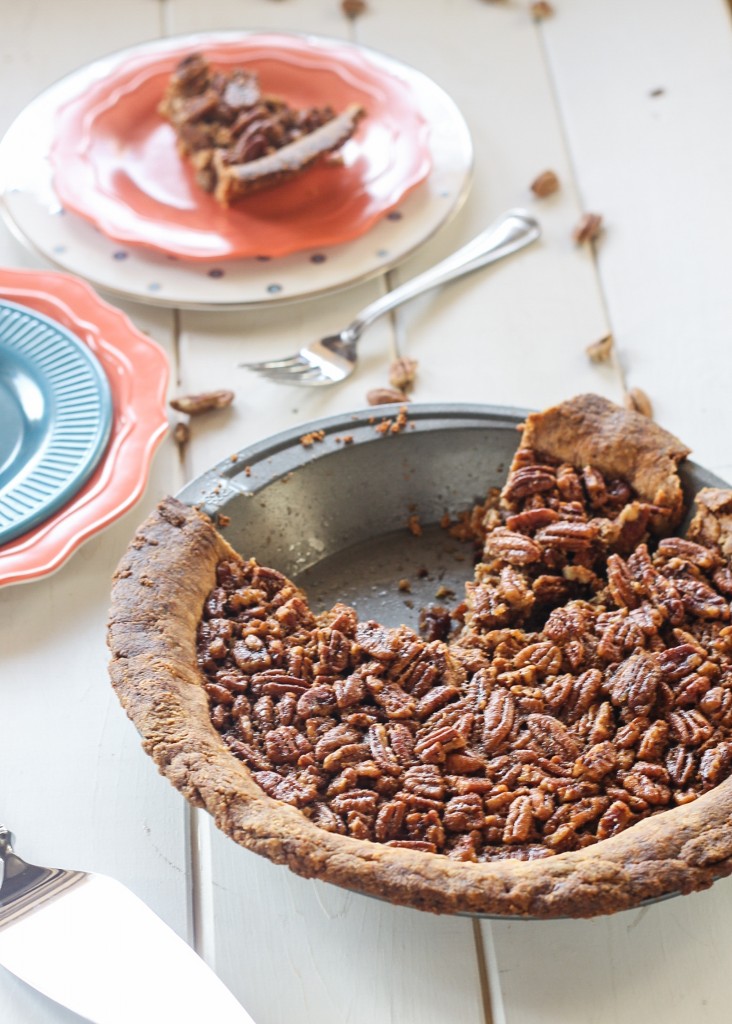 The sweetness of this pie is subtle, not the cloying sweetness that comes from traditional pecan pie. This pecan pie avoids the thick, sugary goo in favor of a more subtle and flavorful filling that is chockfull of crunchy pecans.

Best of all? You can sneak an extra slice without any guilt because all of the ingredients are whole foods.

This Paleo pecan pie got a huge thumbs up from everyone who tried it, even the traditional pecan pie lovers. My grammy declared it one of the best things I’ve made, and for it being a healthy treat, that’s about as high of praise as it can get!

For the pie crust