This Paleo Carrot Bread is incredibly moist, and full of spices, chopped walnuts and golden raisins. This hearty bread is gluten-free and refined sugar free. 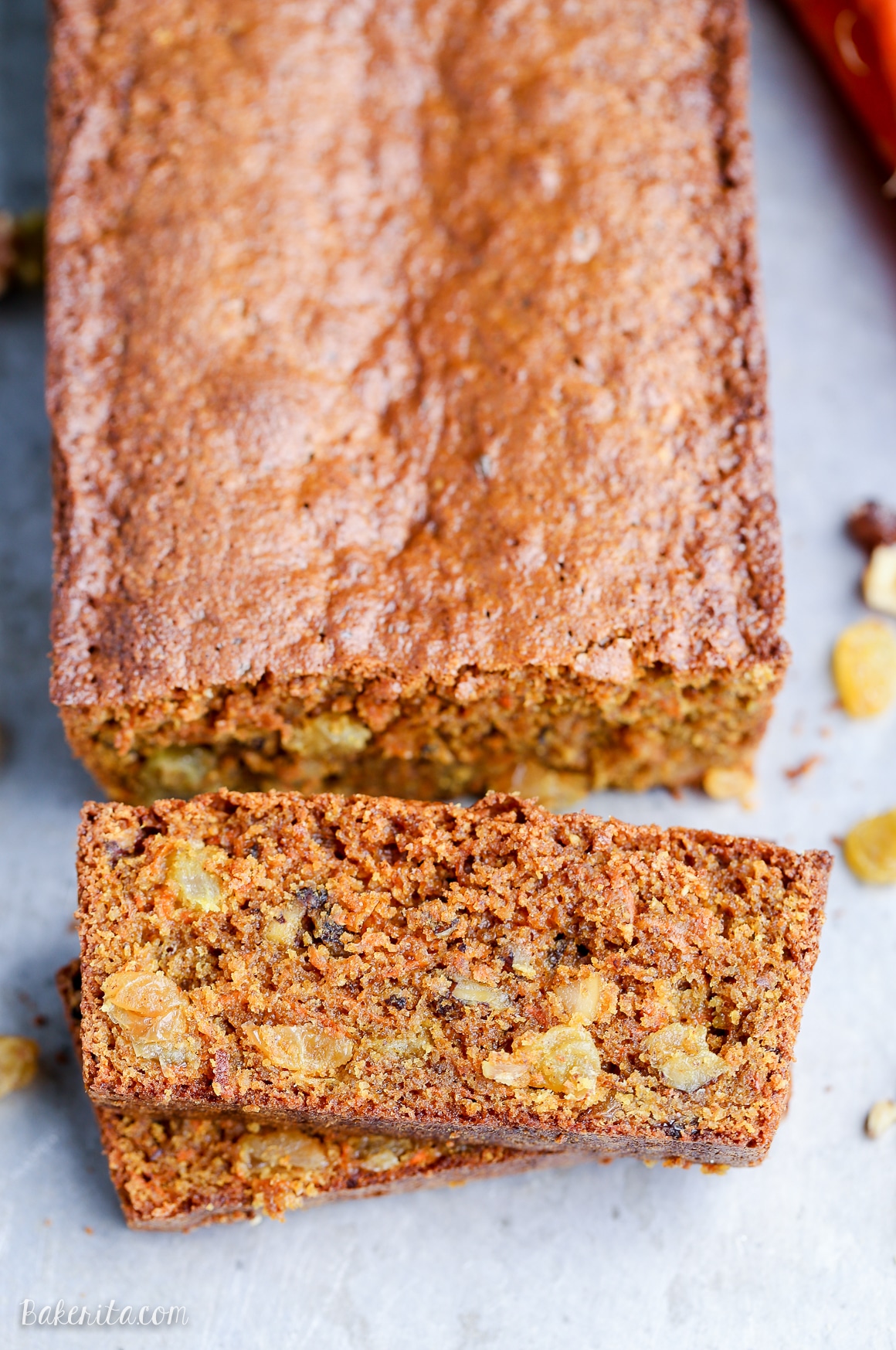 this recipe
Soo…I’m calling this Paleo Carrot Bread, because that’s what it is and it’s SEO friendly and decently descriptive, but I really wanted to call this Sunshine Bread. My sister actually came up with the idea for a carrot tumeric bread when she was helping me recipe brainstorm over the holidays, I wrote “sunshine bread!” with the description, and the idea has been stuck in my head ever since.

I was predicting it would turn out to be a beautiful golden color thanks to the tumeric, grated carrots, and golden raisins. However, the coconut sugar derailed my colors plans and the bread turned a more rusty orange color – not as “sunshine-y” and I had envisioned, and the name didn’t fit as well as I had planned. Also, sunshine bread is not descriptive at all. 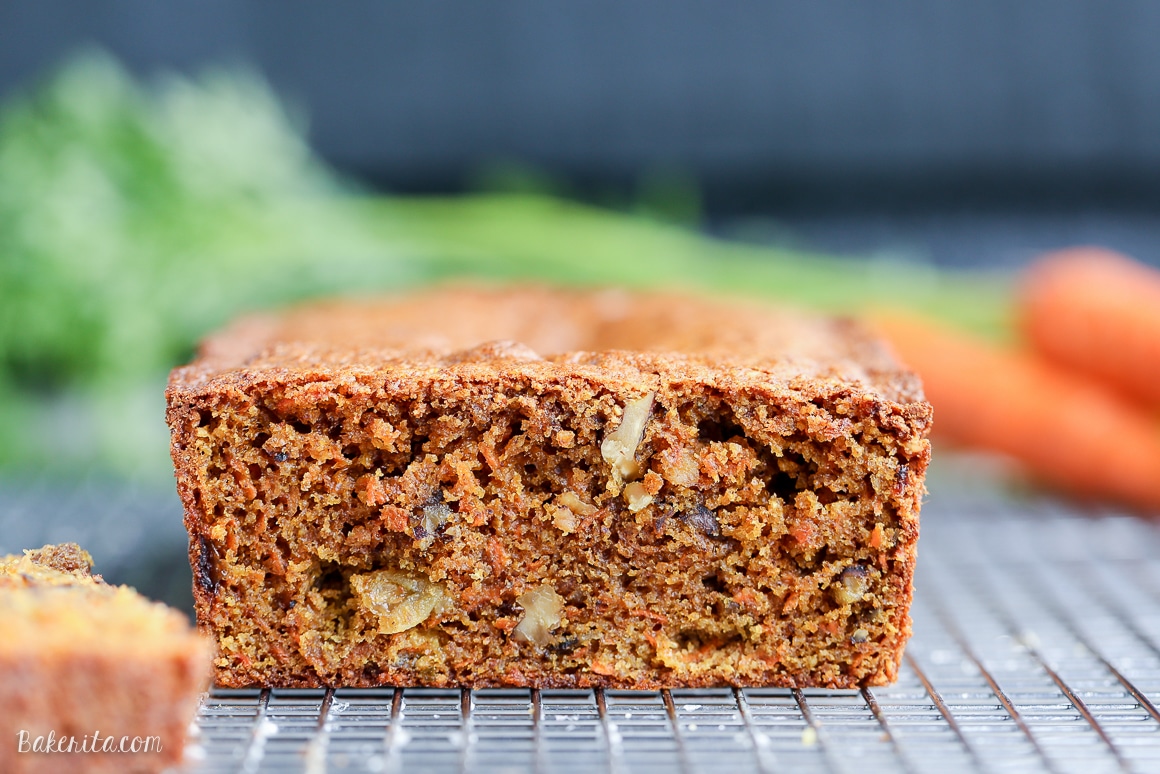 Regardless, though Google is calling it “Paleo Carrot Bread,” it will forever be referred to in my head as sunshine bread, because doesn’t it just make you smile? ☀️

Okay, enough talking about the name. Let’s talk instead about why I’m obsessed with it. It’s SO super moist – in fact, the few few times I made it, it was sooo moist that the middle was sinking. It looked terrible, but still tasted amazing and I ate the whole thing, as I did repeatedly as I tested this recipe, and guys…I finally GOT IT! 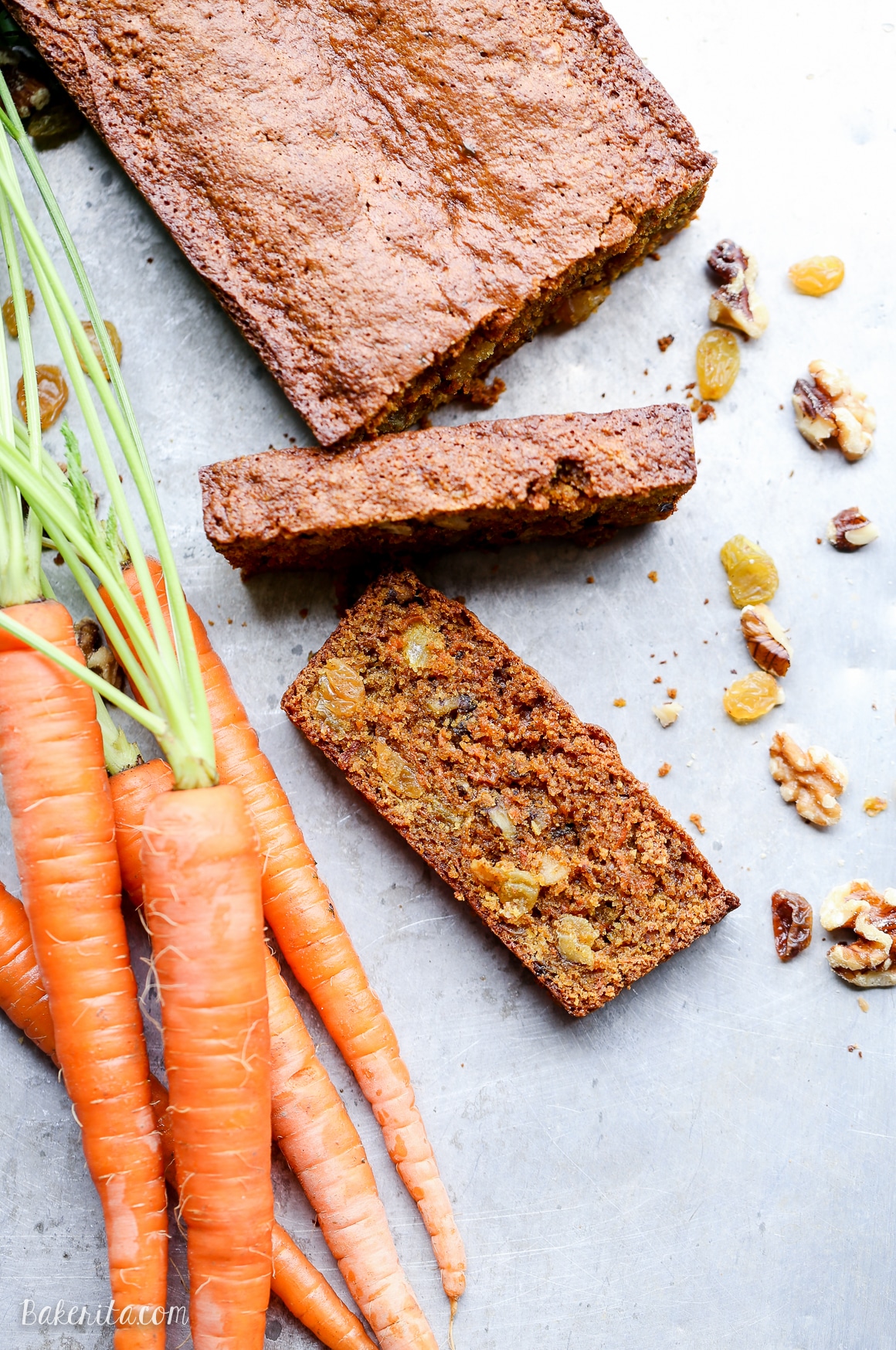 It’s sweet, but not too sweet. It’s well spiced, thanks to a combo of cinnamon, nutmeg, and tumeric, without being overwhelming. It’s moist and soft without being too wet. I love texture in my breads, so I added crunch with walnuts and bursts of chewy sweetness with raisins. In the recipe though, I listed them as optional since I know some folks can’t stand the thought of nuts or raisins in their baked goods.

The combination of flours is important here. There’s just one teaspoon of coconut flour, but it really does help absorb some of that excess moisture that the carrots are giving off as the bread bakes. You may skip it if you must, but your bread may sink a bit in the middle, as mine did initially. 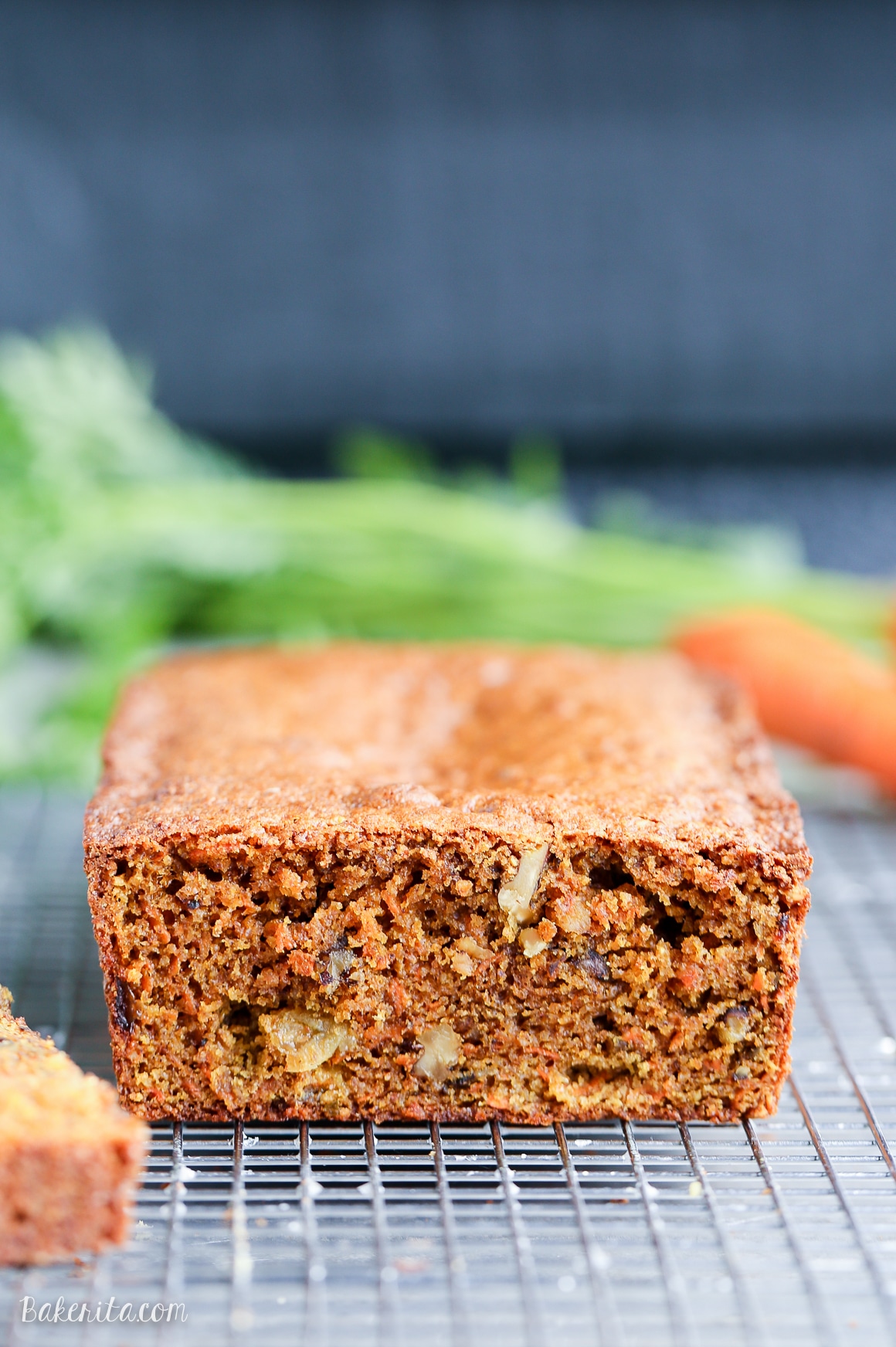 The tumeric may seem like an odd addition, but it adds a wonderful slightly earthy flavor that combines fabulously with the other spices – it also adds some color! Time to make some sunshine bread ☀️☀️ happy baking! 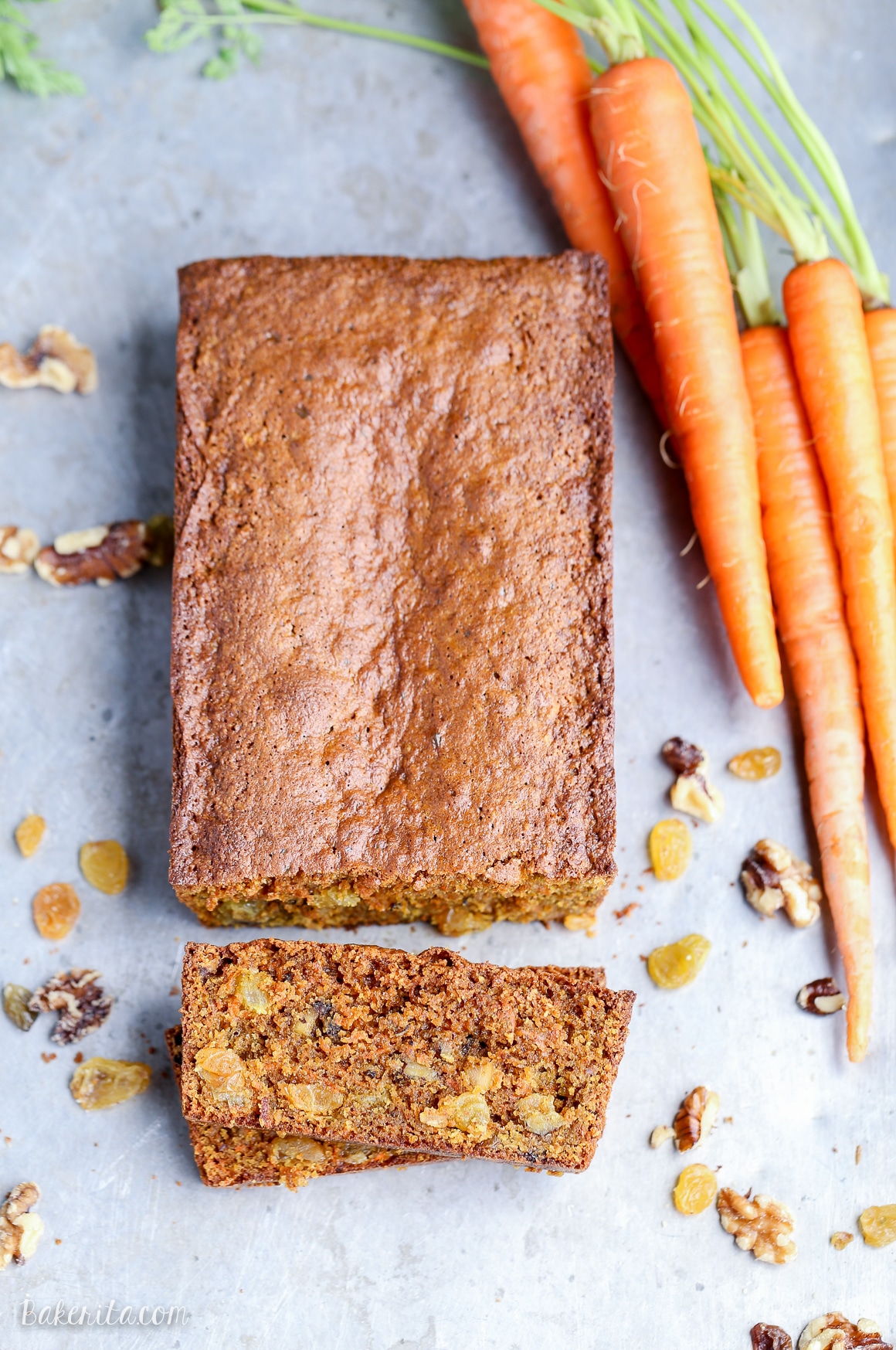