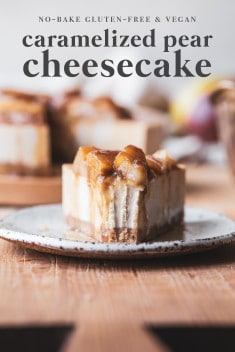 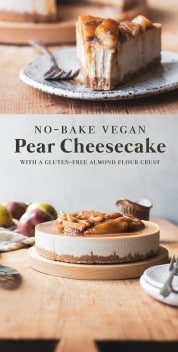 This No-Bake Vegan Pear Cheesecake has a simple gluten-free almond flour crust, a luscious vanilla bean cheesecake, topped off with an easy-to-make caramelized pear topping! It’s delicious, beautiful, and perfect for special occasions. Made in partnership with USA Pears!

I’m just going to say it: pears don’t get enough love! Don’t get me wrong, I have a number of pear recipes on this website that make me swoon…just look at this caramel pear crisp, these apple cider poached pears in puff pastry, and this apple pear crisp. But so often, they’re underappreciated in the dessert world, despite their juicy, tender deliciousness that works perfectly in so many recipes, both sweet and savory! There is not much that beats biting into a perfectly ripe, juicy pear…

So, we’re embracing pears wholeheartedly with this no-bake vegan pear cheesecake. The incredibly delicious caramelized pear topping is a major standout that you’ll be wanting to put on everything. I wouldn’t blame you for making a double batch of this goodness to put on your oatmeal, your cakes, your ice cream…or just eat it with a spoon.

Is vegan cheesecake hard to make?

No, it’s not! I find it actually way easier to make than a traditional cheesecake – especially when you’re doing a no-bake cheesecake like this one! No special tricks are needed to avoid cracking or using water baths here.

To make the crust, you’ll simply stir the almond flour, coconut oil, maple syrup, cinnamon, and salt together in a bowl until combined, then you’ll press it evenly into the bottom of your pan.

For the vanilla bean cheesecake filling, we use soaked cashews as the base. To make it, you’ll blend the softened cashews with canned coconut milk, maple syrup to sweeten, coconut oil (which helps the cheesecake firm up), lemon juice (which adds that cheesecake-y tartness), and salt and vanilla for flavor.

The filling usually takes a few minutes to blend in a high-speed blender. Once it’s done, you’ll have a silky smooth and delicious cheesecake filling. Just pour it on top of the crust and tap it hard a few times against the counter to pop any air bubbles. Then, place it in the refrigerator or freezer to firm up.

Let’s get into that caramelized pear topping…

There are so many fantastic varieties of pears, but for this recipe, I used USA-grown Anjou pears – both the red Anjou and green Anjou varieties! They are so delicious, easily accessible, and super juicy, which works so well with this caramelized pear reduction since the juices release a bit to help create a fantastic pear-scented caramel sauce.

The caramelized pear topping comes together in about 10 minutes too. To make it, you’ll melt your fat – I used vegan butter, but coconut oil will also work. Then, you’ll add in the pears. You can choose to do sliced pears, as I did, or chop the pears into chunks.

Sprinkle coconut sugar over the pear mixture, along with a pinch of salt, and let simmer for about 5 minutes, taking care not to stir too much, as you don’t want to break the pears up too much. Once they’re softened but not falling apart, remove them from the heat and add some vanilla extract. Let cool slightly, then spoon the pears over the top of the cheesecake. You’ll likely have caramel sauce remaining in the pan – I love putting that into a small jar to drizzle over your cheesecake.

Have extra caramelized pears? These don’t need to be limited to this cheesecake! They also made a fabulous topping for oatmeal, ice cream, simple cakes, or just for eating with a spoon!

How to store pear cheesecake

If you want to make this recipe ahead of time, you can make the cheesecake portion up to 5 days ahead and keep it stored in the freezer. I would recommend making the caramelized pear topping the day of serving for the freshest, most delicious result. I love adding the warm topping to the chilled cheesecake for a fantastic combination of flavors, textures, and temperatures.

If you would like to make the pear topping ahead of time, you can make it up to one day ahead of time. Keep it stored separately from the cheesecake portion and add it just before serving, warming it up slightly if desired.

Once assembled, I would keep the pear cheesecake stored in an airtight container in the refrigerator for up to three days so the topping doesn’t freeze. This will allow the cheesecake to stay soft for slicing and serving, too. Enjoy!!

For the cheesecake filling
For the pear topping