You’ll love this super creamy No-Bake Vegan Pumpkin Cheesecake! It has a pecan crust and a spiced pumpkin cheesecake filling that’s made with soaked cashews. This healthier pumpkin cheesecake is gluten-free, dairy-free, paleo + vegan, and absolutely perfect for the holidays. 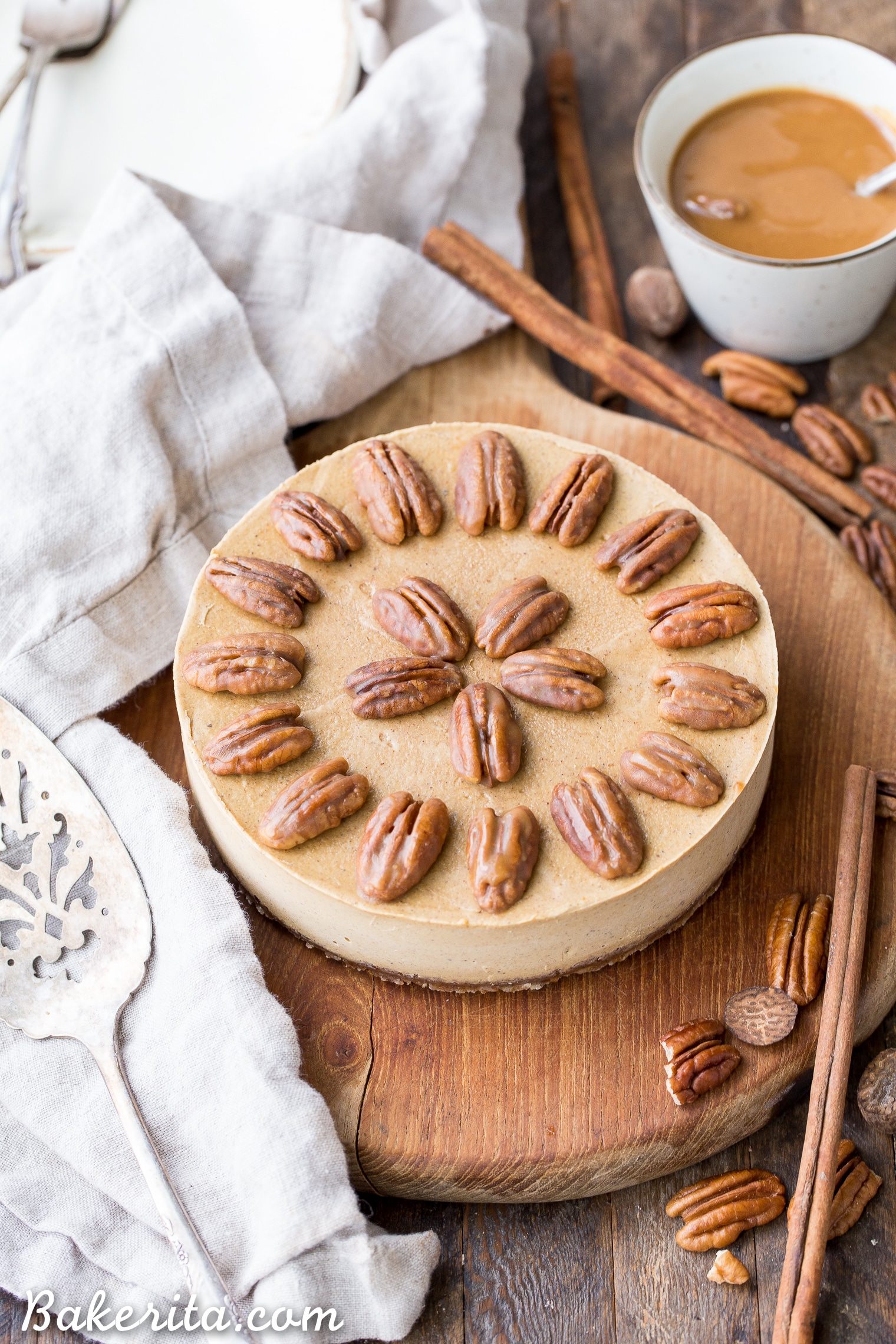 Ah, Monday. Hi. This post is a little bit late, as it’s now Monday morning at 10AM – well past when my usual Monday posts are published. But, after a long birthday weekend, I cut myself a little slack – I hope you guys don’t mind :)

Annddd I’m sure you won’t, once you see what deliciousness I’ve got in store for you today! In fact, I wish I was eating a slice of this goodness right now, as I hope you are too after looking at these photos ;) 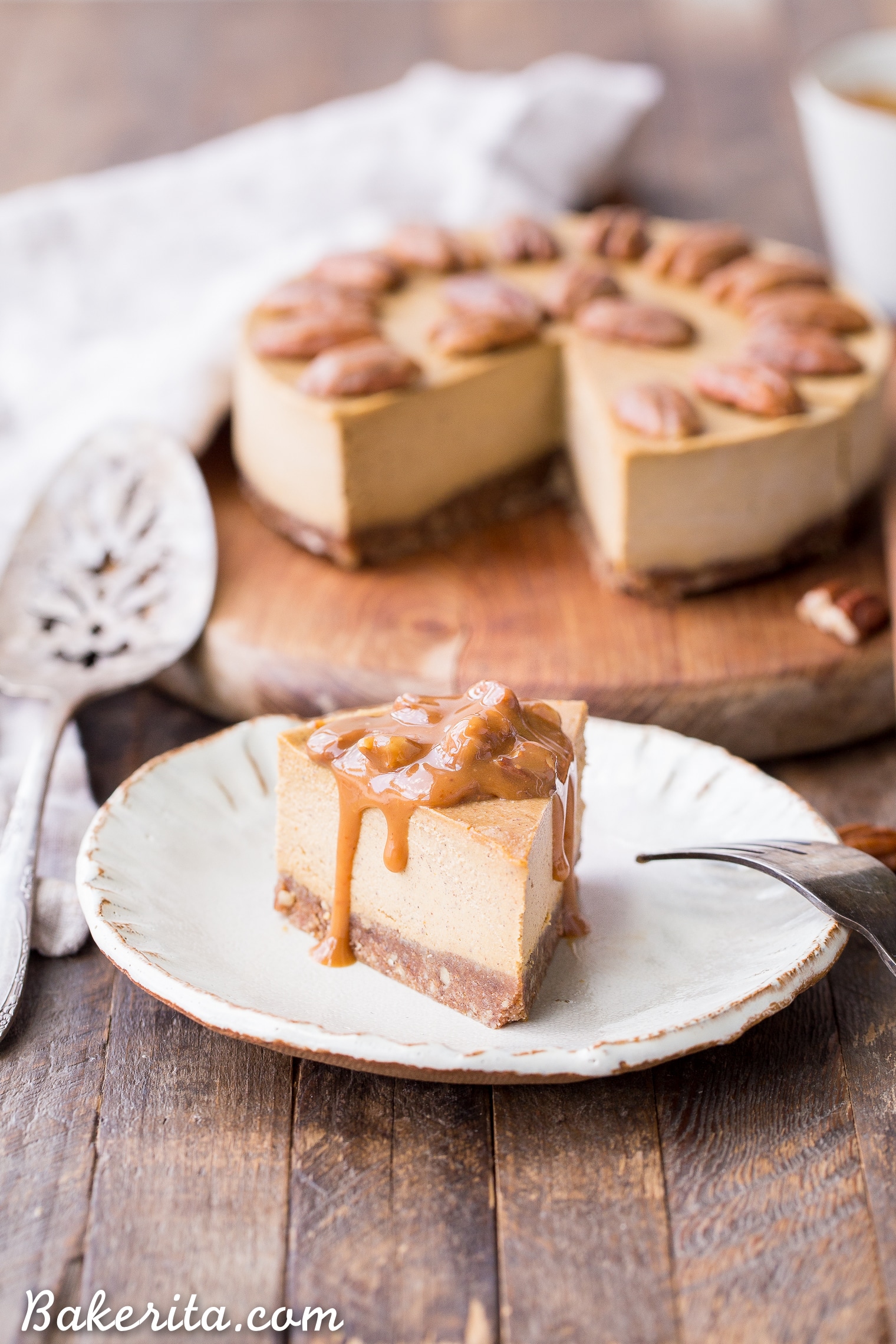 I’ve started to go pumpkin crazy, spicing everything up with cinnamon and nutmeg, and adding the orange stuff to everything. My fall obsession has collided with my other favorite dessert obsession as of late: cashew cheesecakes. The result is this gorgeous, smooth, creamy, super flavorful No-Bake Vegan Pumpkin Cheesecake.

Let’s start at the bottom, with the delectable crust! We make it with a combo of almond flour and pecans. The fatty, sweet flavor of the pecans pairs perfectly with the rest of the flavors of the cheesecake. It also works so well with the caramel-covered pecans on top of the cheesecake. A few dates help to hold the crust together and we add cinnamon for warmth. 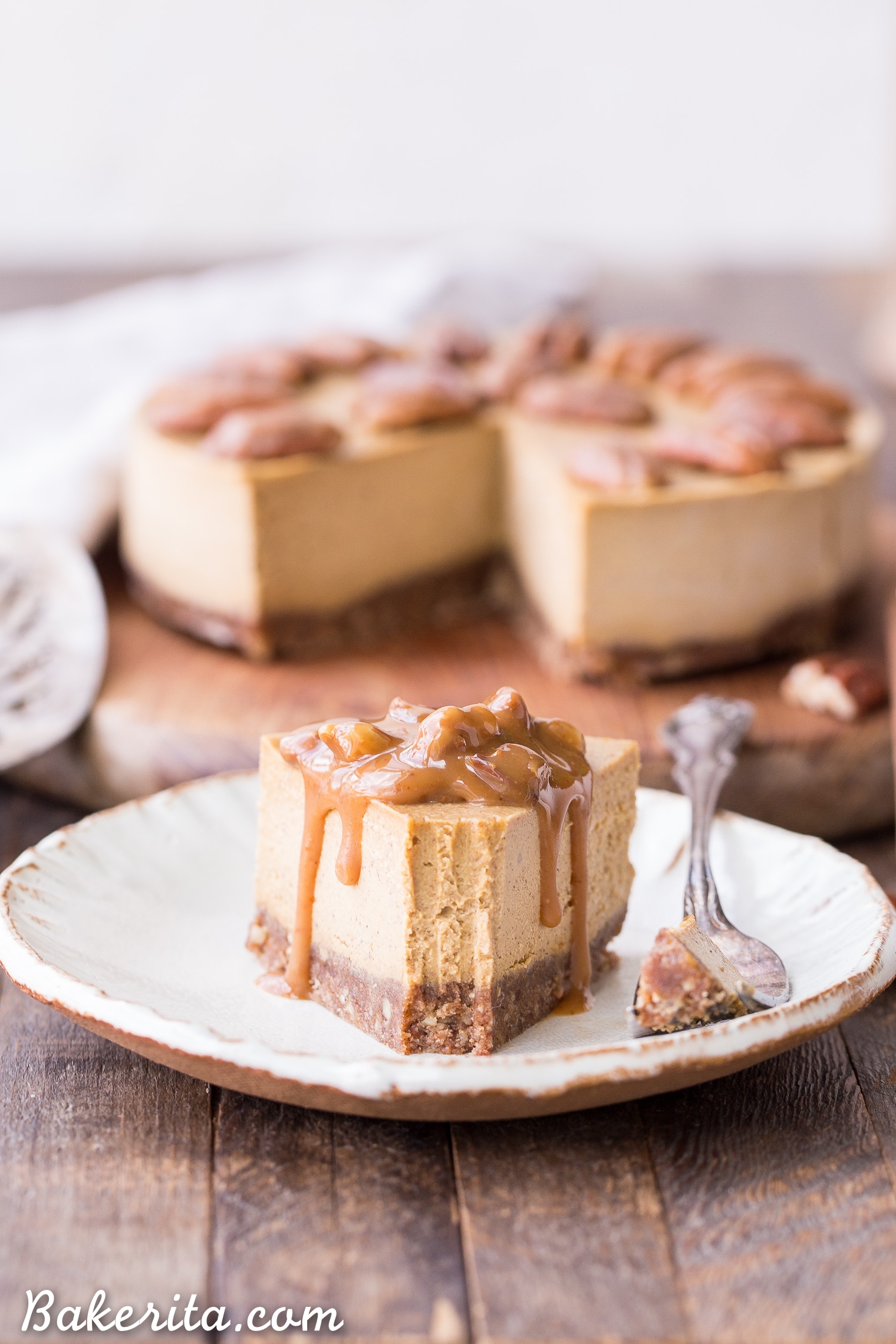 The filling is super simple to make, but it does require a bit of forethought. To soften the cashews, we must soak them in water for at least 4 hours or so. Once we’ve soaked the raw cashews, they transform. You can blend them to be super smooth and creamy, which provides an amazing base for the “cheesecake” filling. You won’t even miss the cream cheese!

In addition to the cashews, we make the filling with an all-star cast of Fall ingredients: pumpkin puree (of course), maple syrup, molasses, vanilla, cinnamon, nutmeg, ginger, allspice, and cloves, along with coconut oil to help firm the cheesecake up, and coconut milk to help it blend easily. That’s all! And to make it, you just whiz everything in a high-powered blender (I use my Vitamix) or a food processor. 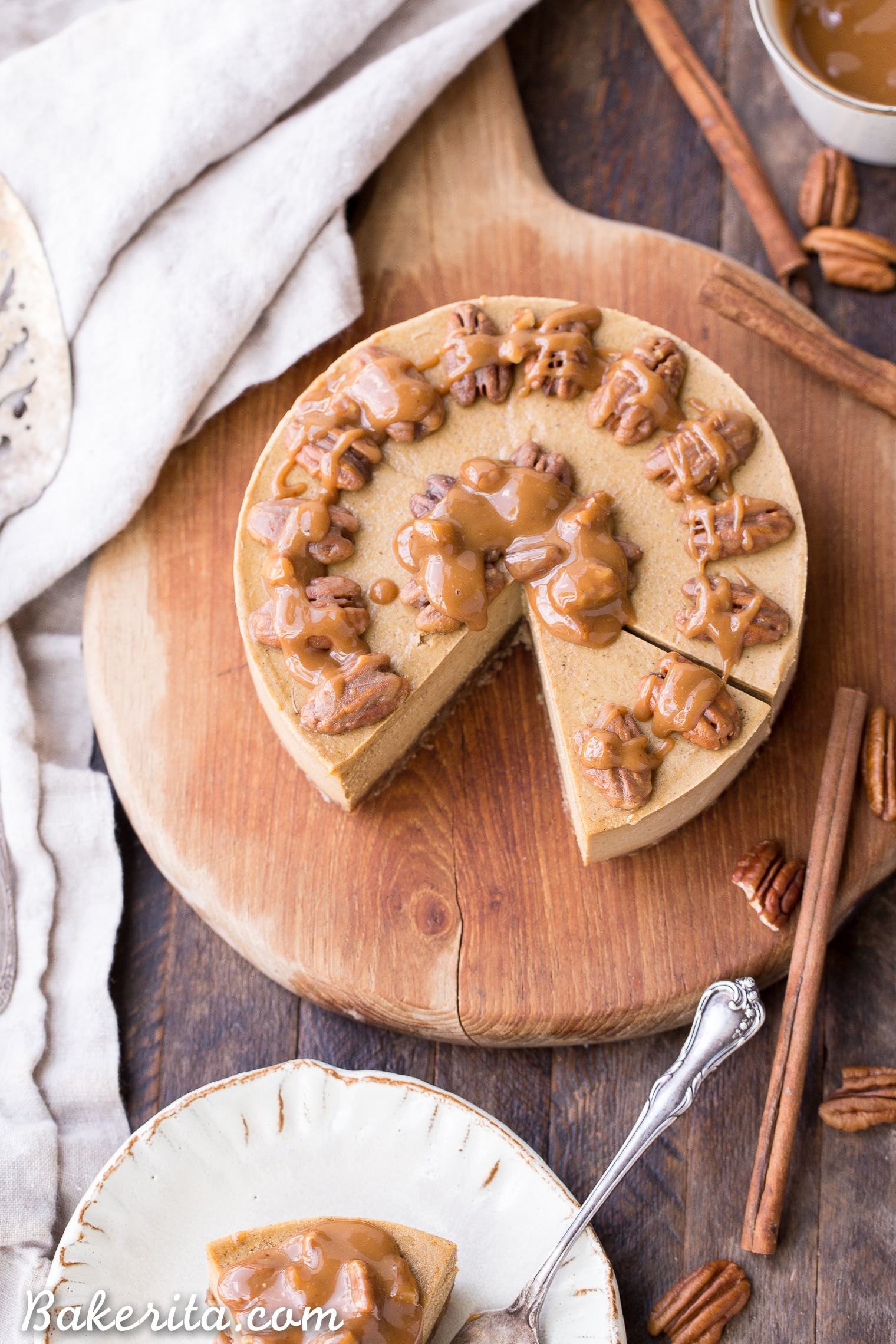 You’ll need a little more patience as you wait for the pumpkin cheesecake to set in the freezer. But – after a few hours, you’re ready to devour. Don’t forget the SUPER simple caramel sauce to go on top 😏! We make it with cashew butter, coconut oil, and maple syrup, and it’s amazing. I stirred some chopped pecans into mine too, for some extra crunch.

A slice of this no-bake vegan pumpkin cheesecake makes up your Fall dessert dreams. It’s got a crunchy, slightly chewy crust, topped with a rich, decadent pumpkin spice cheesecake filling and a creamy, sweet caramel sauce drenched on top. When you sink your teeth into this decadence, you’ll be hard-pressed to remember that it’s gluten-free, dairy-free, paleo, and vegan. 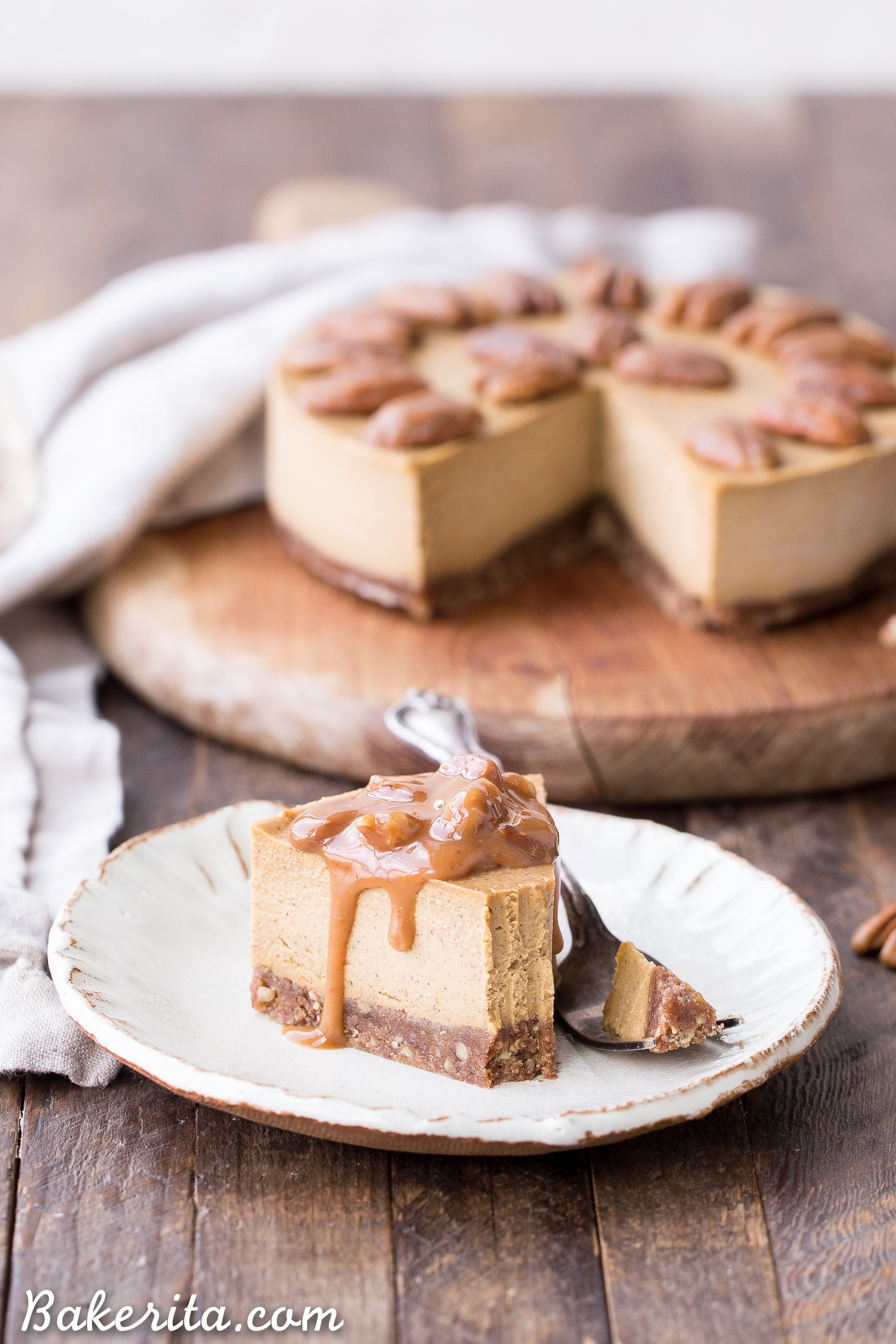 Whether you make this vegan pumpkin cheesecake for a casual weekend or let it have a spot on your holiday dessert table, it will steal your PSL-loving heart. Nothing basic about this, though :) enjoy! 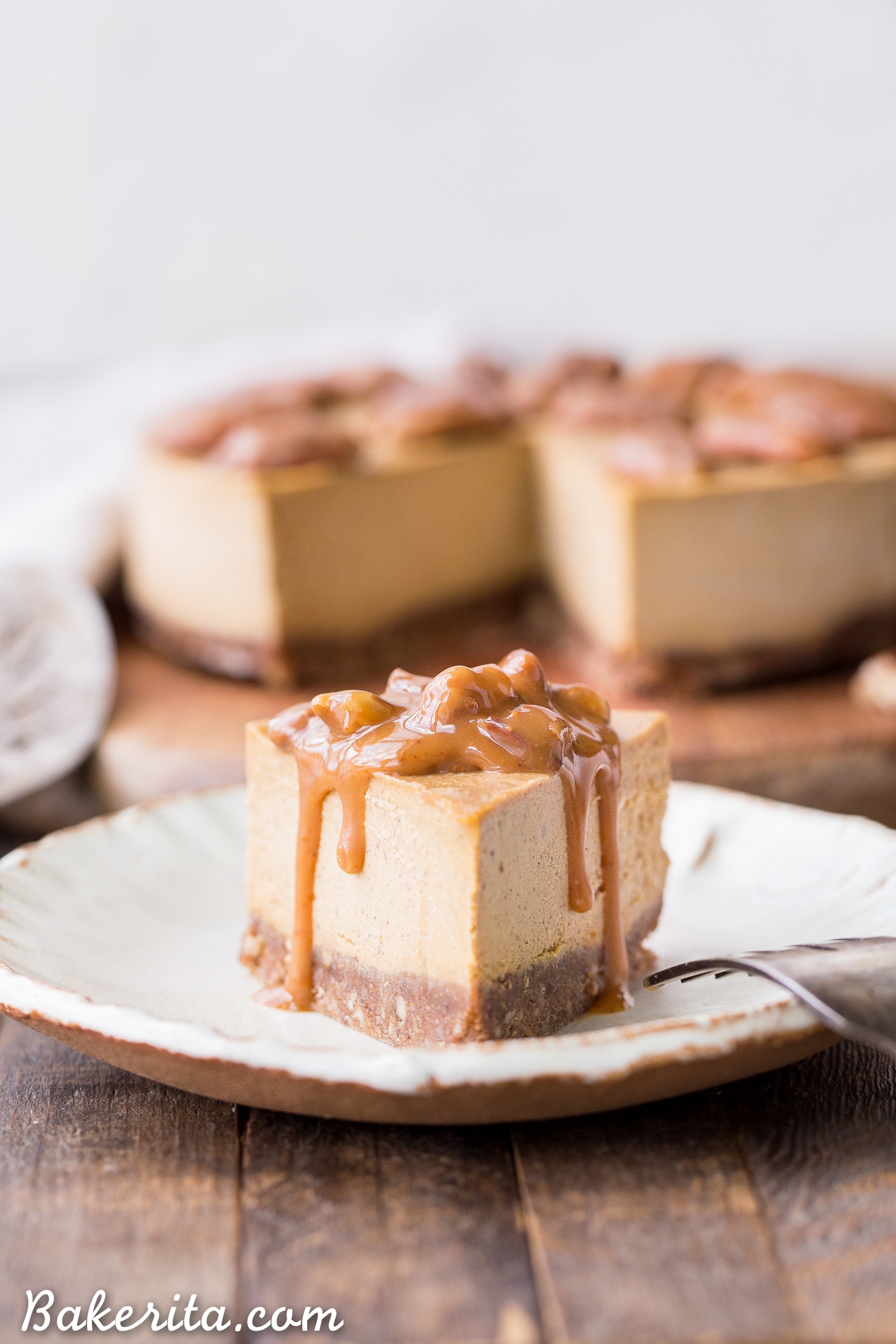 It’s pumpkin season! You’ve got to try these spiced treats…

For the graham cracker crust

For the cashew caramel sauce

For the cashew caramel sauce 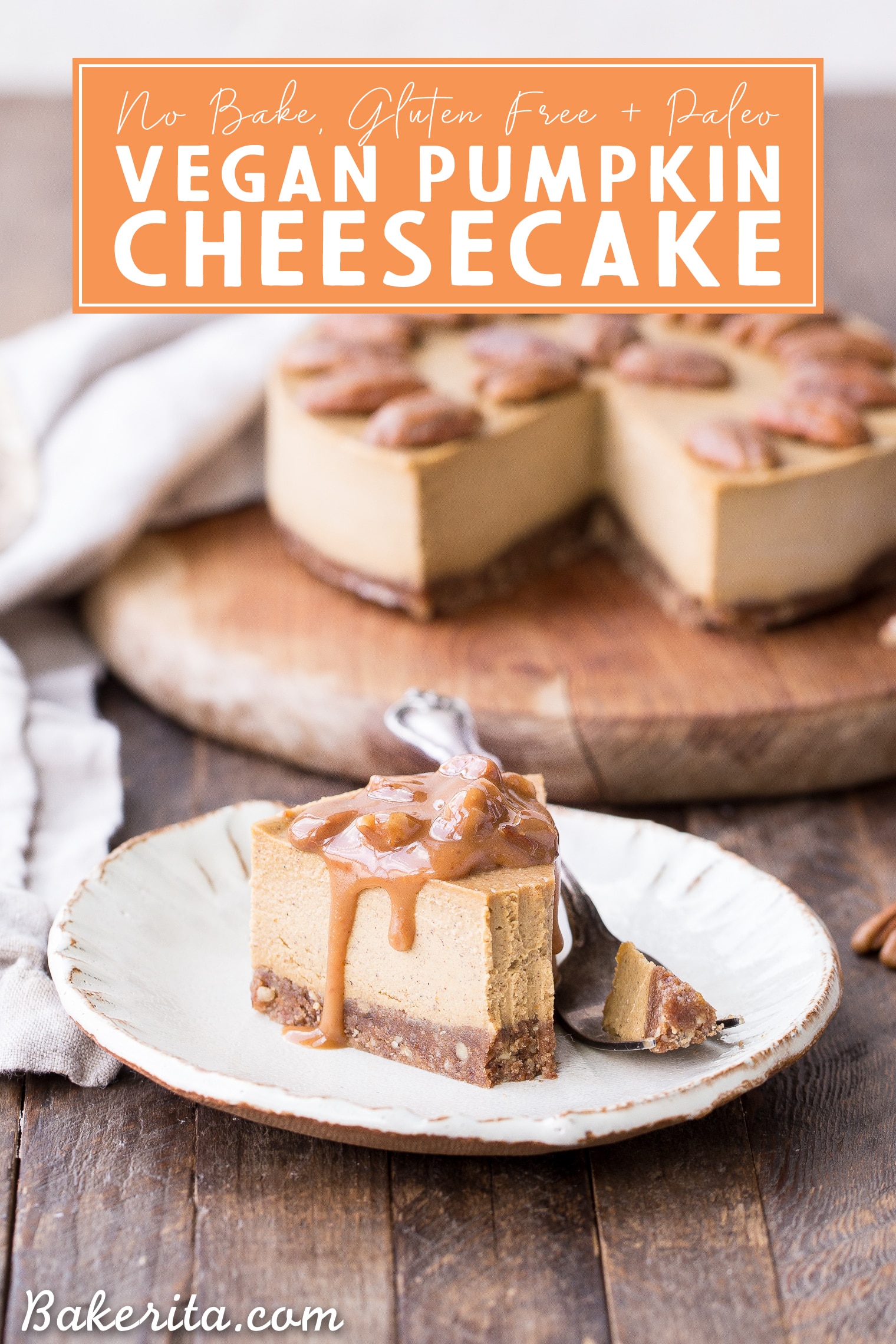