This homemade Cinnamon Raisin Almond Butter is smooth and creamy, with chewy bits of raisins in every spoonful! Spread it on apples, bananas, toast, or just enjoy it as is.

I’m going a little nut butter crazy, you guys. I currently have four jars of assorted homemade nut butters sitting in my pantry, and recipes for four more different flavors written in my recipe notebook.

Luckily (or not), they’re disappearing just as quickly as they’re getting made. A jar of this homemade Cinnamon Raisin Almond Butter was the first to go, but luckily, I had two jars of this good stuff. 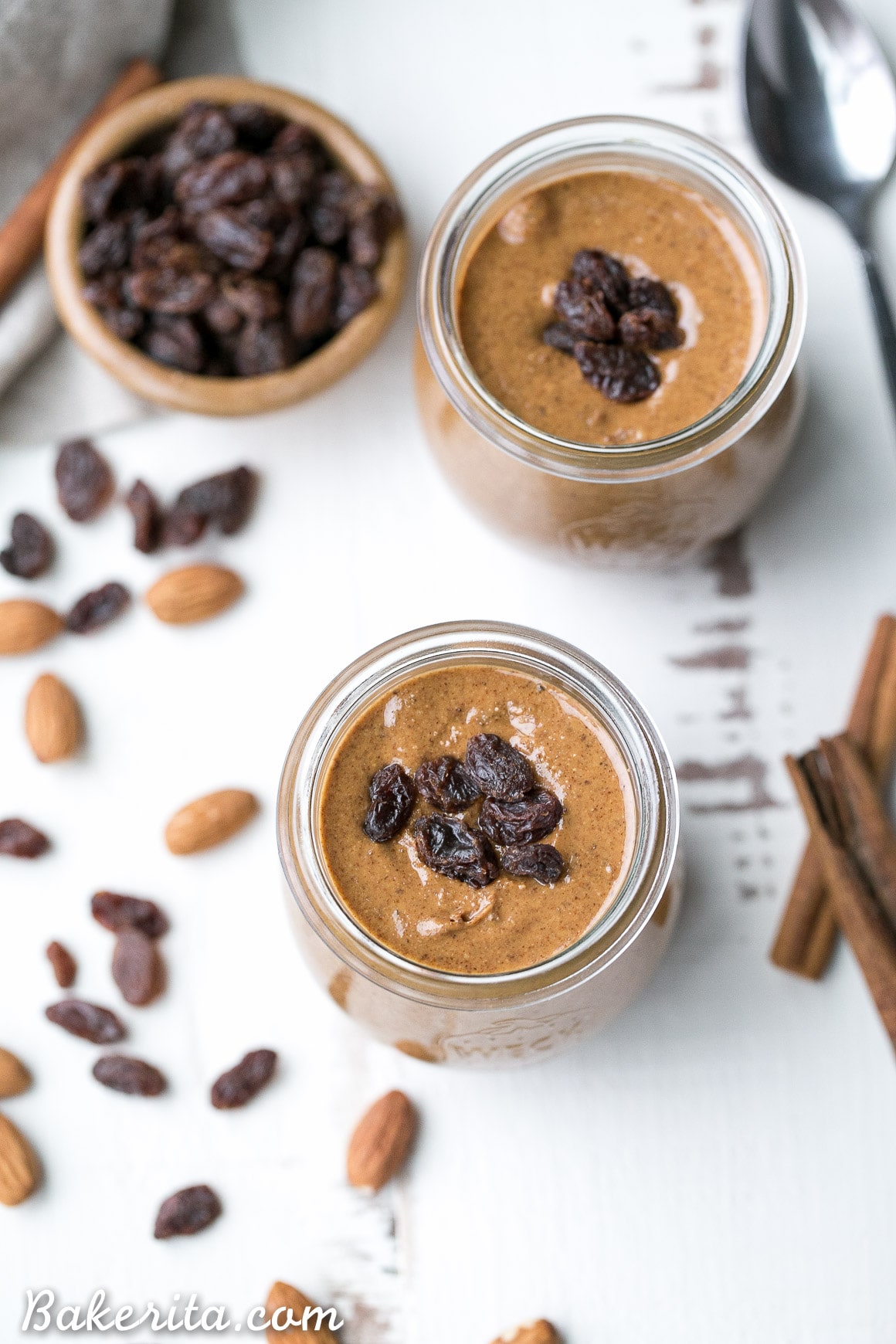 I’m still on Whole30, which is actually going surprisingly well! I’m doing it mostly to help my body detox from sugar (ironic, no?) and it’s been forcing me to cook for myself for every meal, instead of turning to Trader Joe’s prepared foods section when I’m tired after baking all day.

The hardest part though, is having a bunch of recipes I’m dying to make for you and not being able to make any of them until February 11th. I was worried as heck about what recipes I was going to make to share (besides the recipes I already had done) that were Whole30-approved. 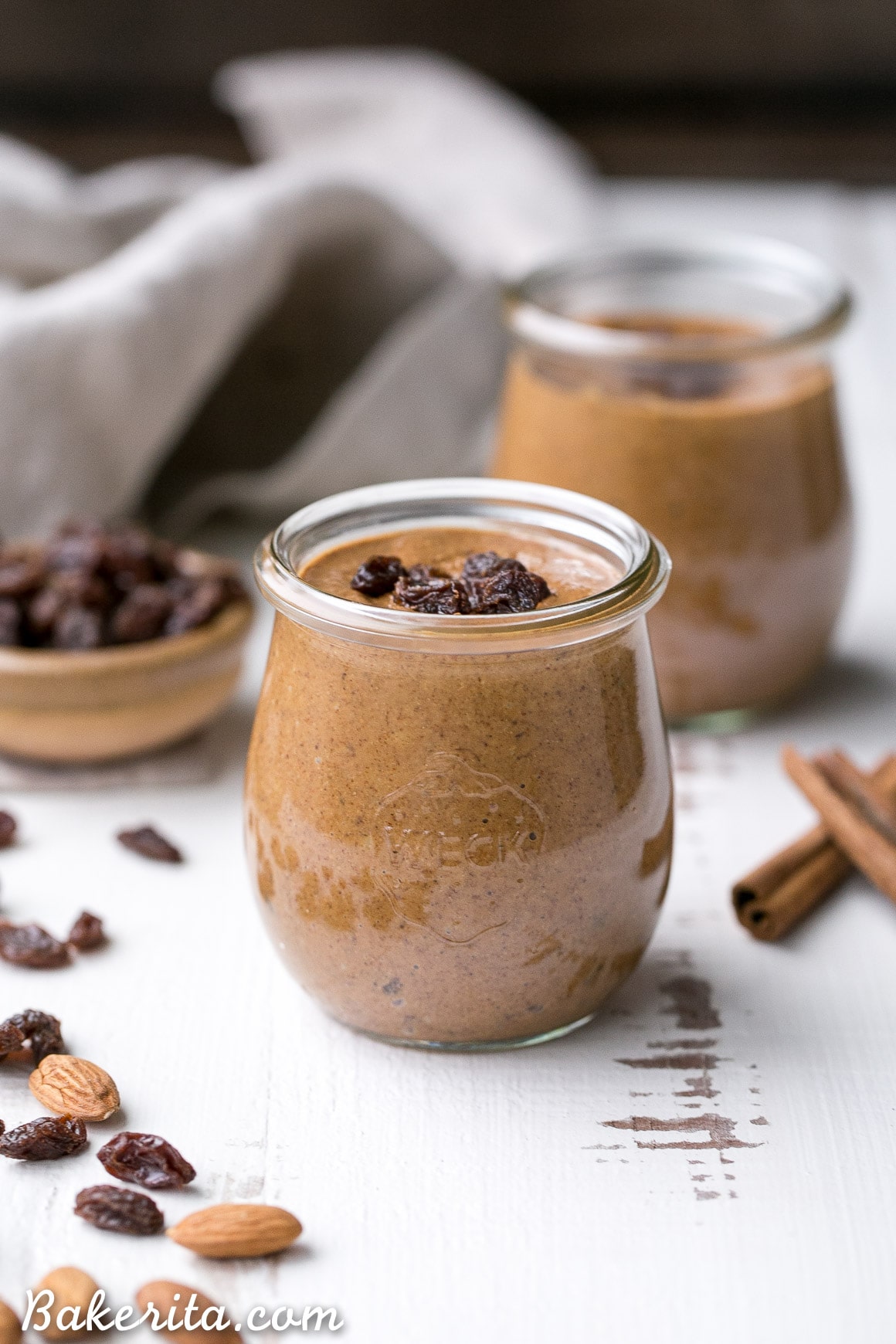 Then I remembered that nut butters are allowed, as long as they’re not peanut butter (no peanuts allowed!) and have no added sugar. Ding ding ding! That, I can do.

My handy-dandy Vitamix has certainly been getting a workout, but I must say, I’m pretty impressed with how quickly and easily it turns whole, hard nuts into super creamy dreamy, drippy nut butter. None of my nut butters have taken more than 3 minutes, which is kind of amazing. 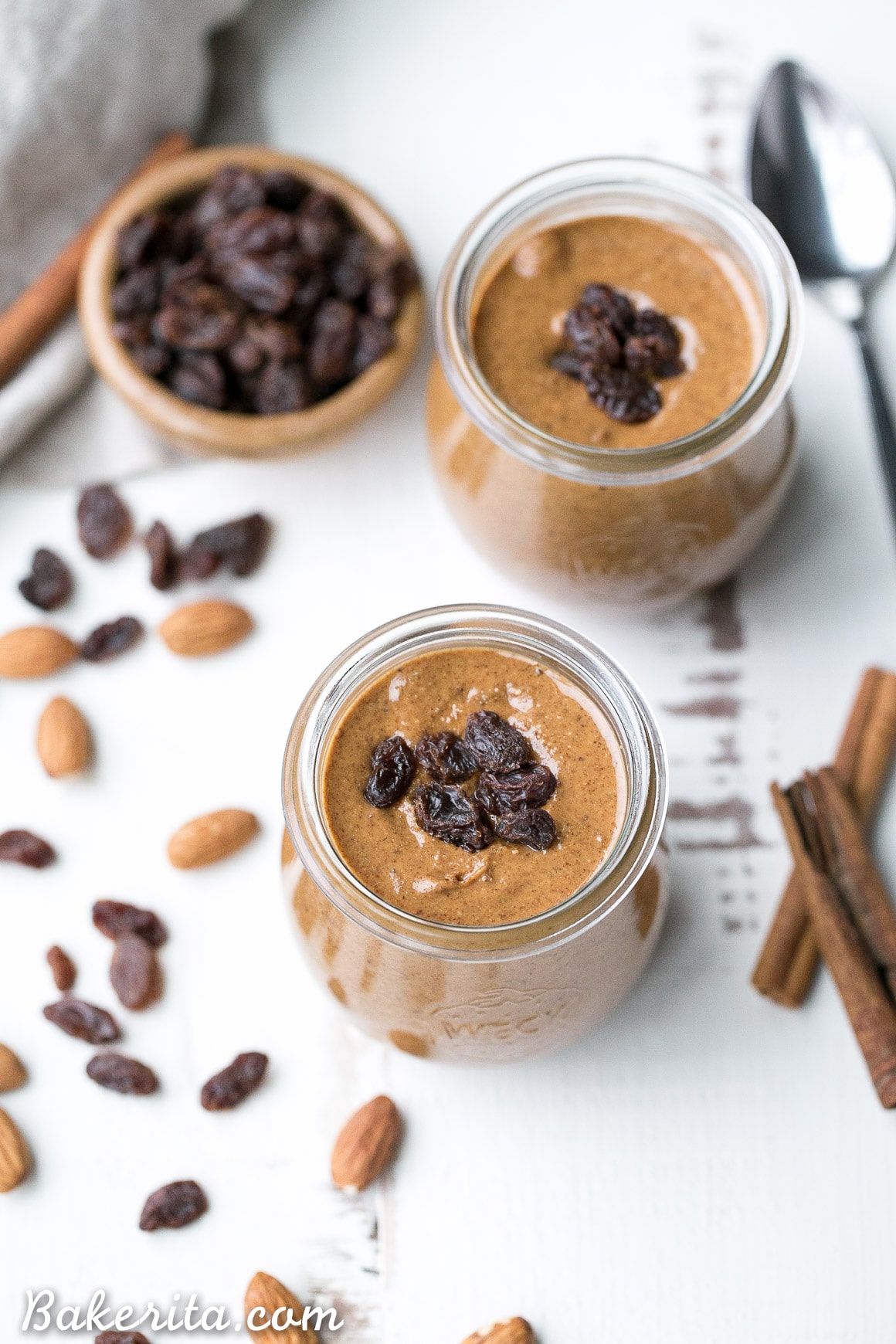 If you’re making this in a food processor, your time will probably be pretty significantly longer, like 10-20 minutes depending on the strength/size. It takes a lot longer because it’s in a bigger container, and you’re going to have to scrape down the sides a bunch. It’s worth it, though! Carry on, and be rewarded with fresh, creamy almond butter.

This recipe really couldn’t be simpler, once you get past the nut-butter-making part. After you’re left with creamy, drippy almond butter in your blender or food processor, you add couple teaspoons of cinnamon, a sprinkle of salt, some coconut oil if your nut butter isn’t as drippy as you like it, and blend! 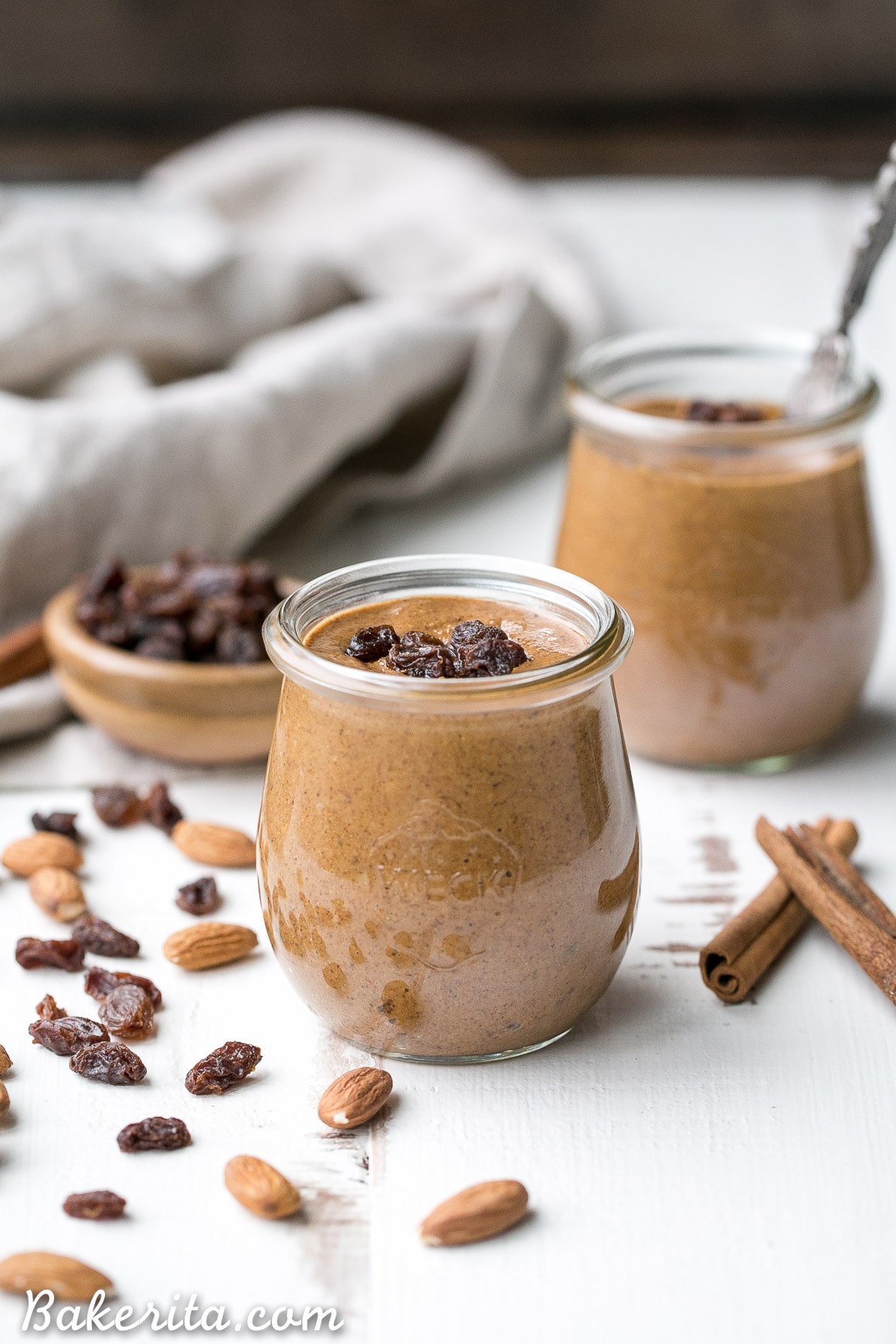 Taste to make sure the cinnamon & salt amounts are to your liking and adjust as necessary, and then pulse in your raisins. You want to pulse them in, not blend them in. We want big raisin chunks in there! Put into a glass jar for safekeeping and…voila, time to devour.

This is the part where I take a spoon and eat way too much nut butter in one sitting. I’ve been gobbling this up on apples for breakfast, but it would also be ridiculously good with bananas, spread on toast, or stirred into oatmeal. Or just go the spoon route – you really can’t go wrong. 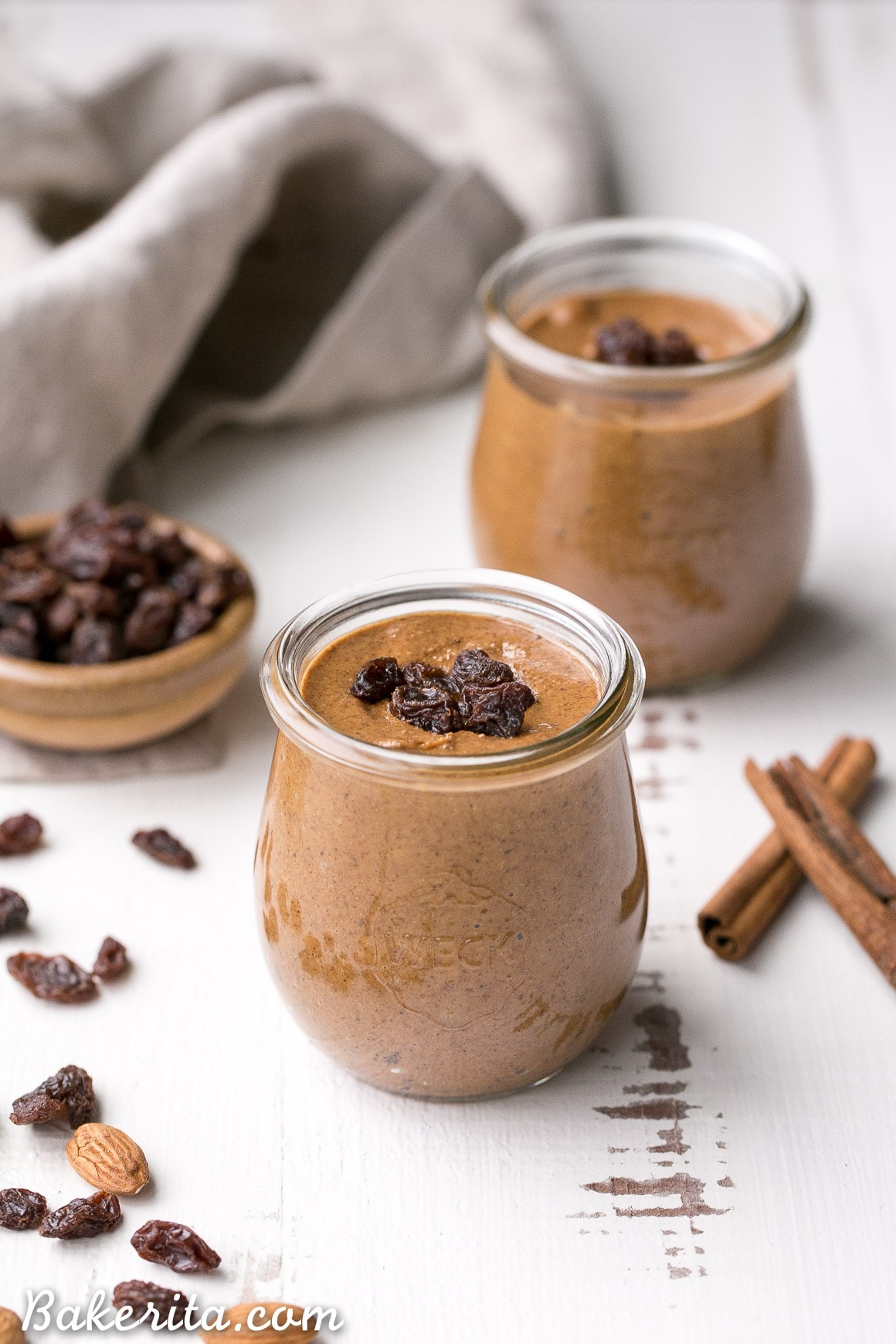