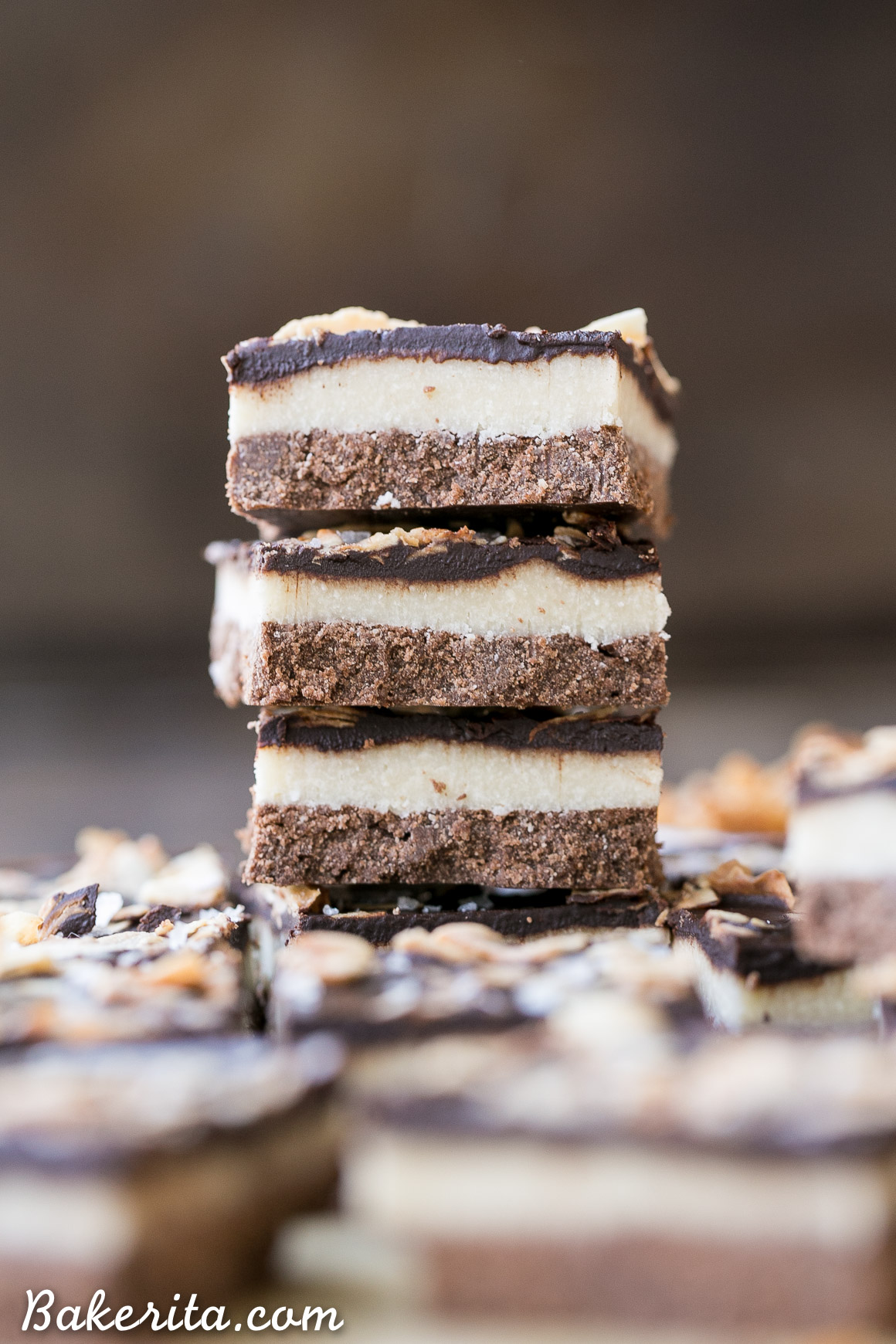 It’s been a little bit since I last sat down to write a post – in fact, I haven’t written one since I got home from my trip to CUBA! Holy cow, you guys, it was AMAZING.

I’ve traveled a lot (somewhere around 30 countries, and counting) but Cuba definitely stands out as one of the most unique places I’ve ever been to. Largely in part to the fact they’ve essentially been a time capsule for the past 50ish years. 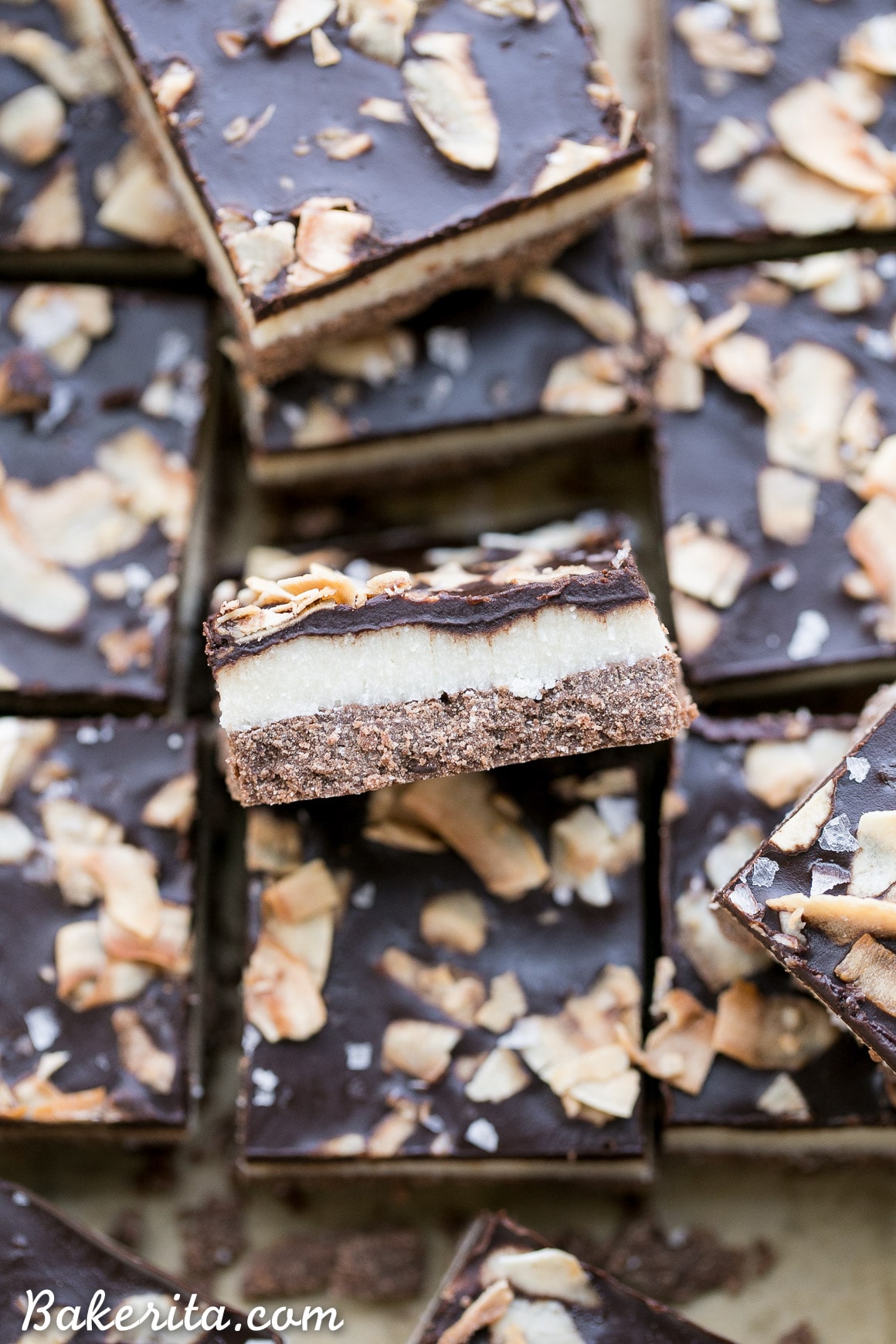 I’m planning on doing a big Cuba recap post since so many people have asked to see the photos from my trip and hear about where we went and what we did. Because of that, I won’t go into too many details here – that post will hopefully be up later this week.

I must say though, it’s an incredibly beautiful country with such a compelling, interesting history and some of the kindest, most welcoming people I’ve ever met. Add a trip to Cuba to your bucket list, and try to cross it off before Wifi takes over the country. Being disconnected was one of the best things about the trip! 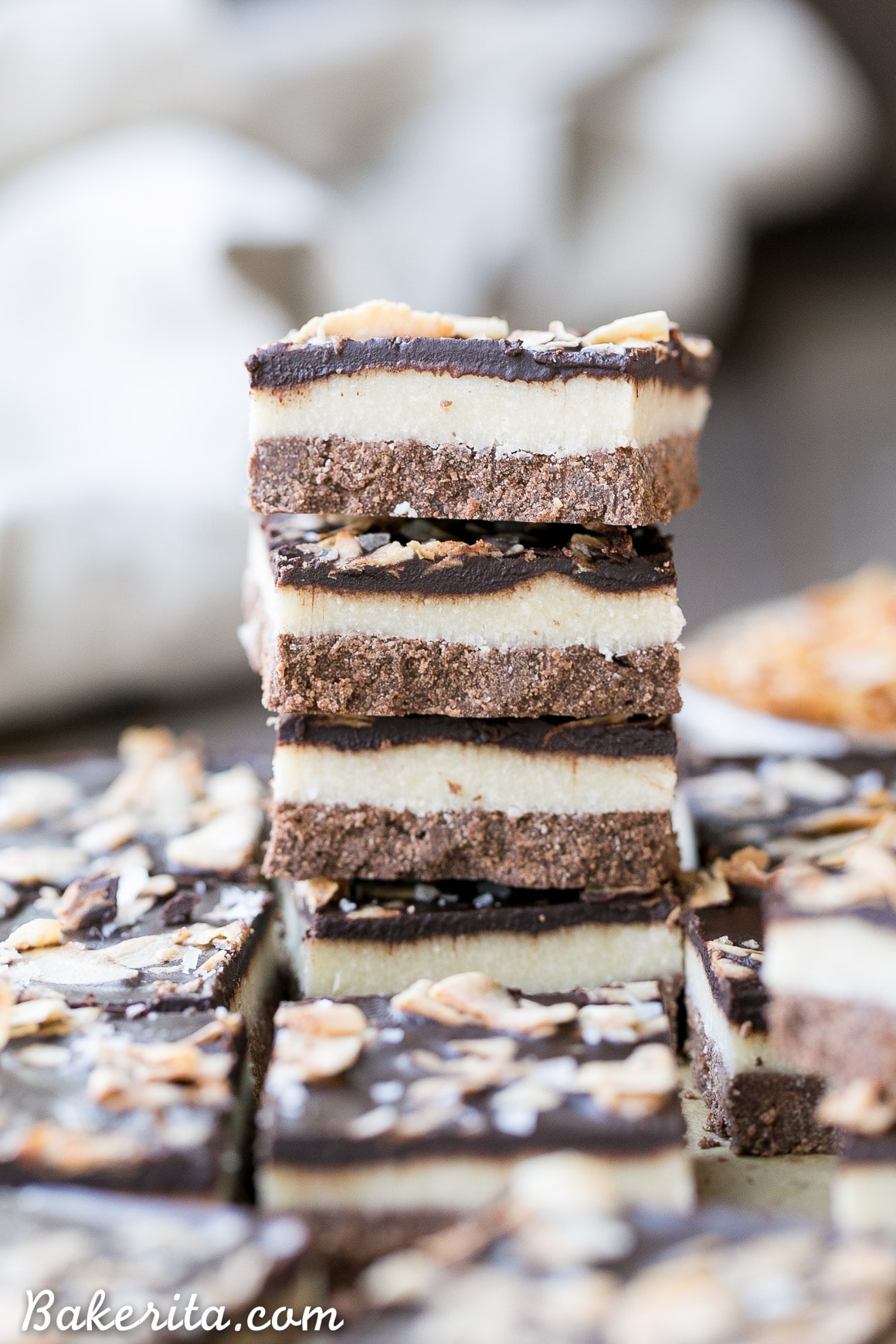 Since getting back…I’ve been doing Whole30. If you don’t know what Whole30 is, you can read about it (and all of it’s rules) here. Essentially though, it’s eliminating ALL processed foods from your diet, and sticking to primarily meat, veggies + fruit.

So baked goods? They’re majorly out, but I still HAD to share the recipe for these chocolate coconut bars with you guys, because they’re super delicious and I need to live vicariously through others enjoyment of treats this month :) 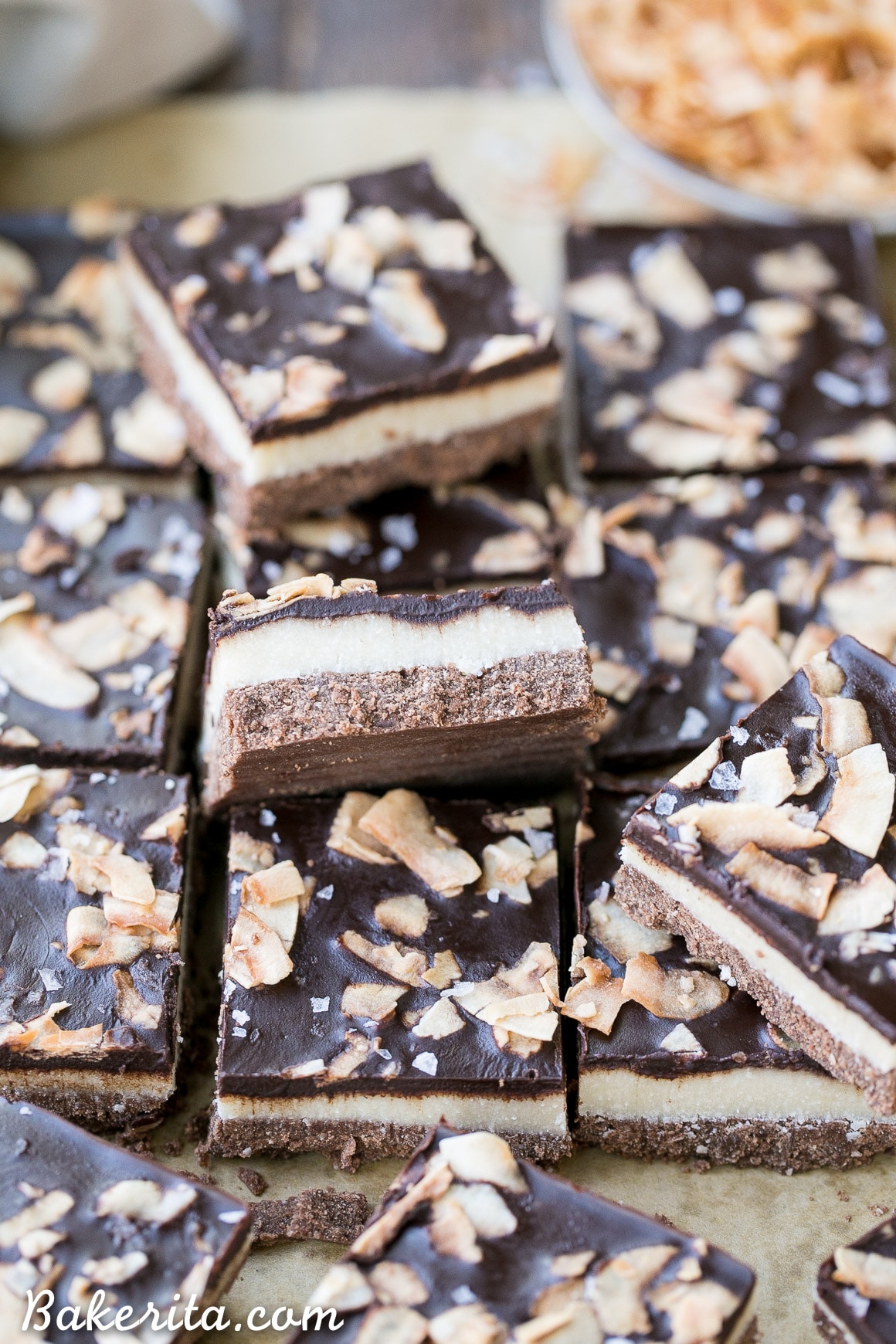 So let’s talk sweets! These Chocolate Coconut Bars start with a simple chocolate shortbread crust – it’s made with coconut flour to replicate that sandy shortbread texture from traditional shortbread. Cocoa powder makes it chocolatey, with a touch of maple syrup to sweeten.

Once the crust is all baked, it’s topped with a smooth + sweet layer of coconut butter filling. A simple chocolate made from coconut oil, cocoa powder, and maple syrup is layered on top of that, and the whole thing is sprinkled with toasted flaked coconut. 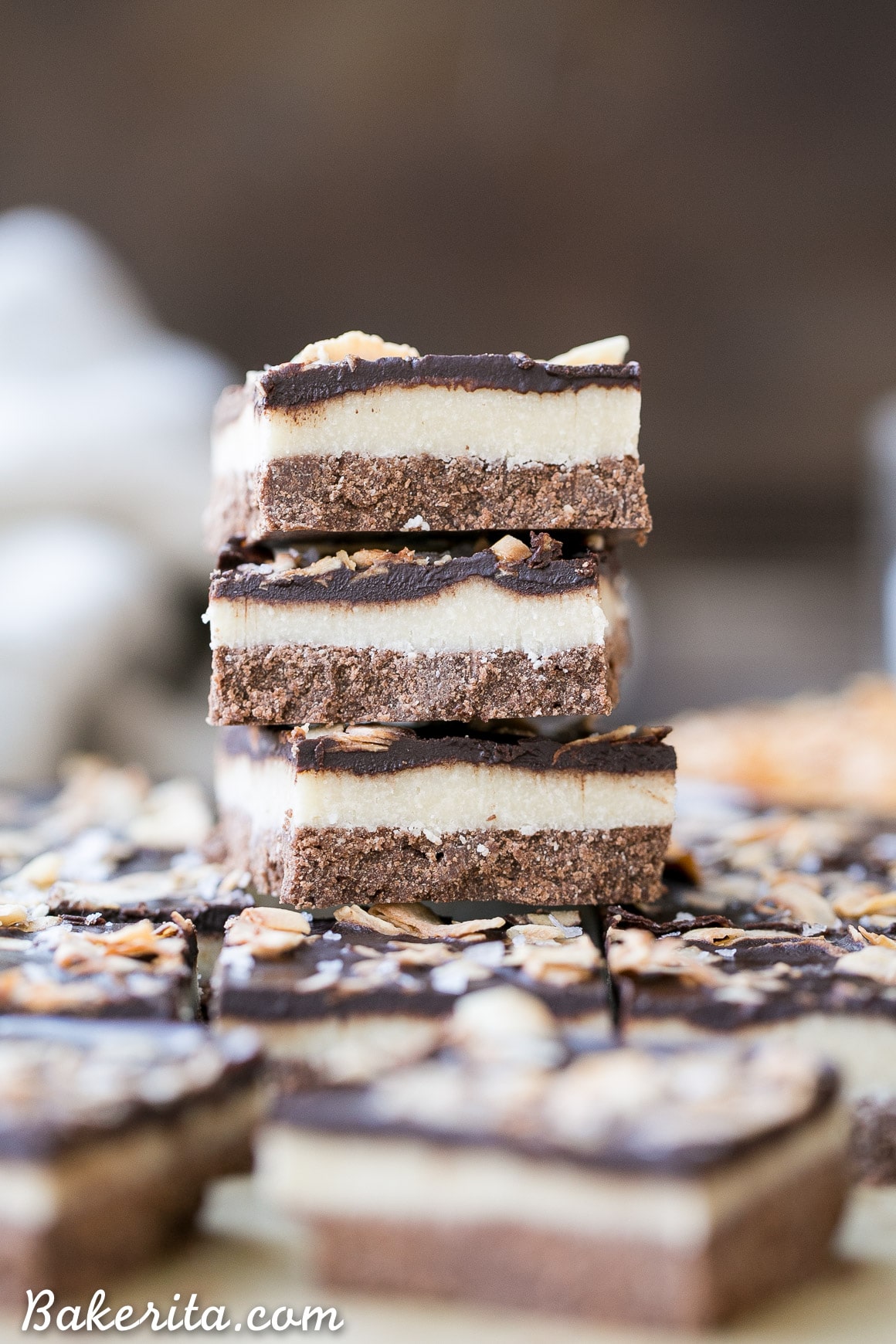 After they set in the fridge, you’re ready to cut and serve! These Chocolate Coconut Bars are entirely gluten-free, grain-free, Paleo-friendly, AND vegan – but they’ll still be devoured as quickly as any other treat ;)

These layered bars seriously melt in your mouth, and the coconut and chocolate flavors pair together so perfectly. They’re the perfect thing to satiate your sweet tooth. Enjoy! 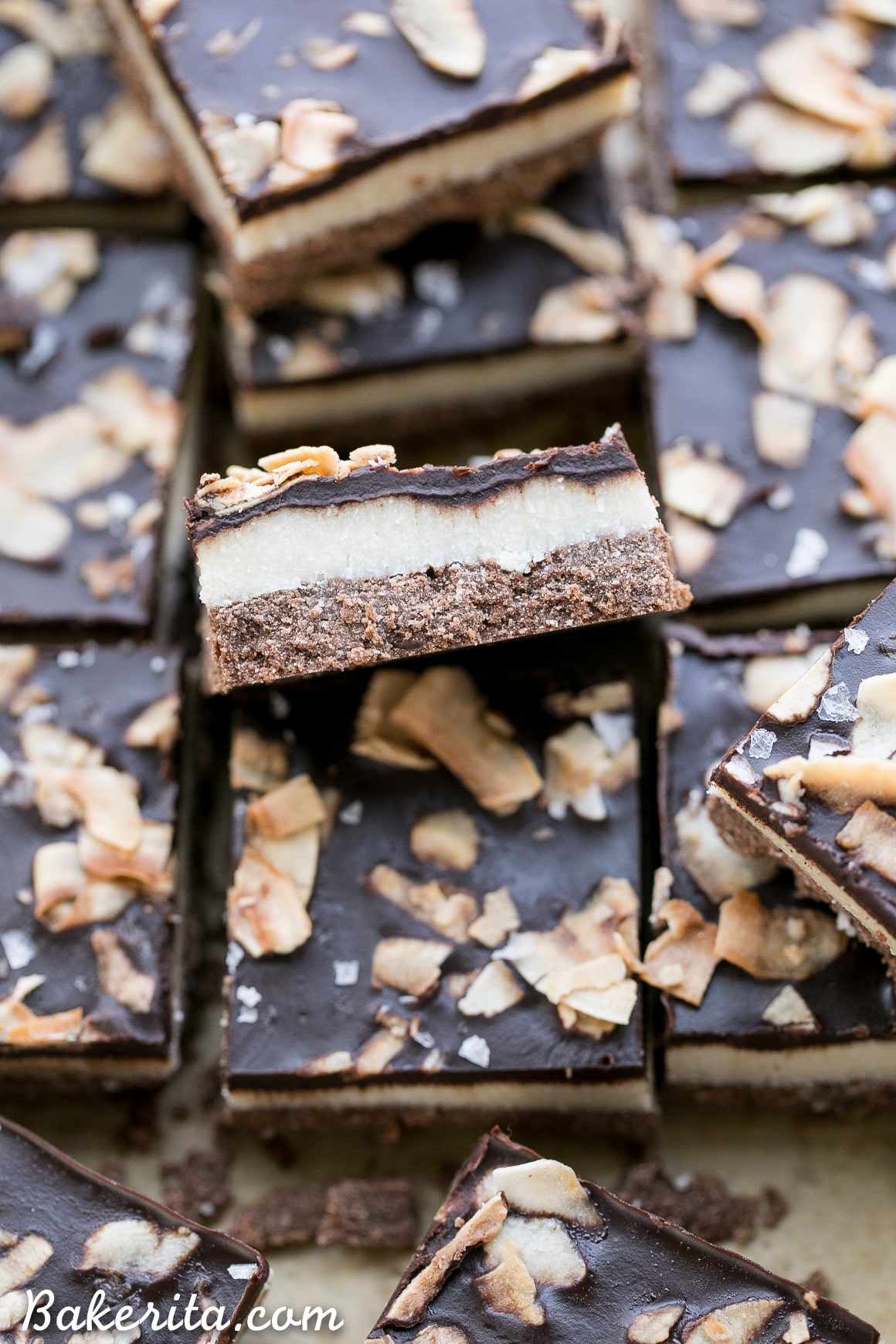 For the chocolate crust

For the coconut filling

For the chocolate topping