These Chocolate Cashew Butter & Jelly Pop Tarts are made with a flaky vegan and paleo crust and stuffed with cashew butter, raspberry jelly, and chopped Hu Kitchen chocolate. You’re going to go nuts for these paleo & vegan copycat of your favorite childhood treat! Thanks to Hu Kitchen for sponsoring this post. 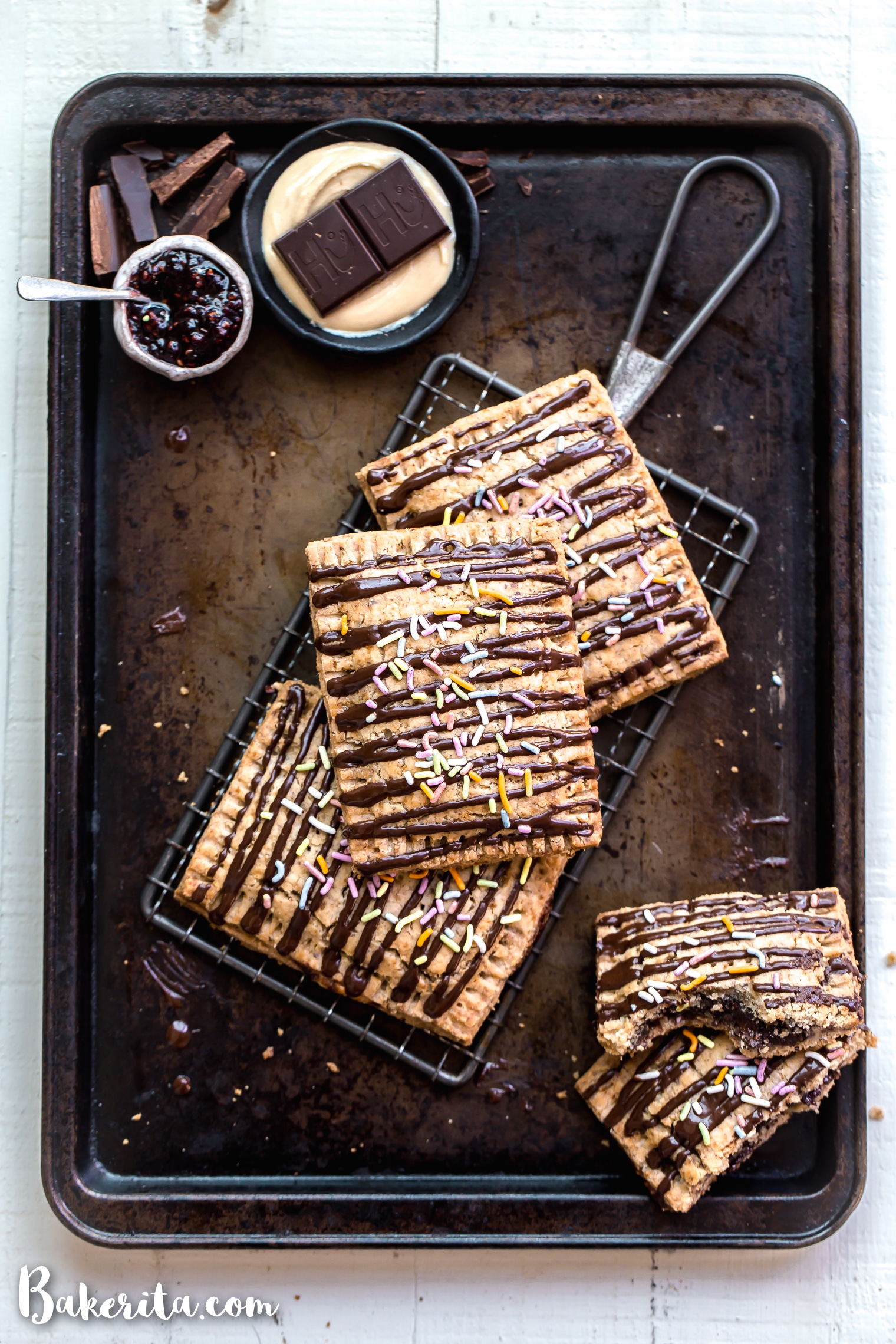 I’m so excited about today’s post. This is one I’ve been wanting to do for a while, and it’s finally here! We’re recreating one of the favorite unhealthy snacks of my childhood: POP TARTS. And we’re doing it with one of my favorite brands: Hu Kitchen. Double win.

When I was in middle school, Pop Tarts were my go-to vending machine snack. I usually bought the Hot Fudge Sundae flavor and devoured the whole packet during the break between 2nd period P.E. and 3rd period science class with Mr. Glausser. 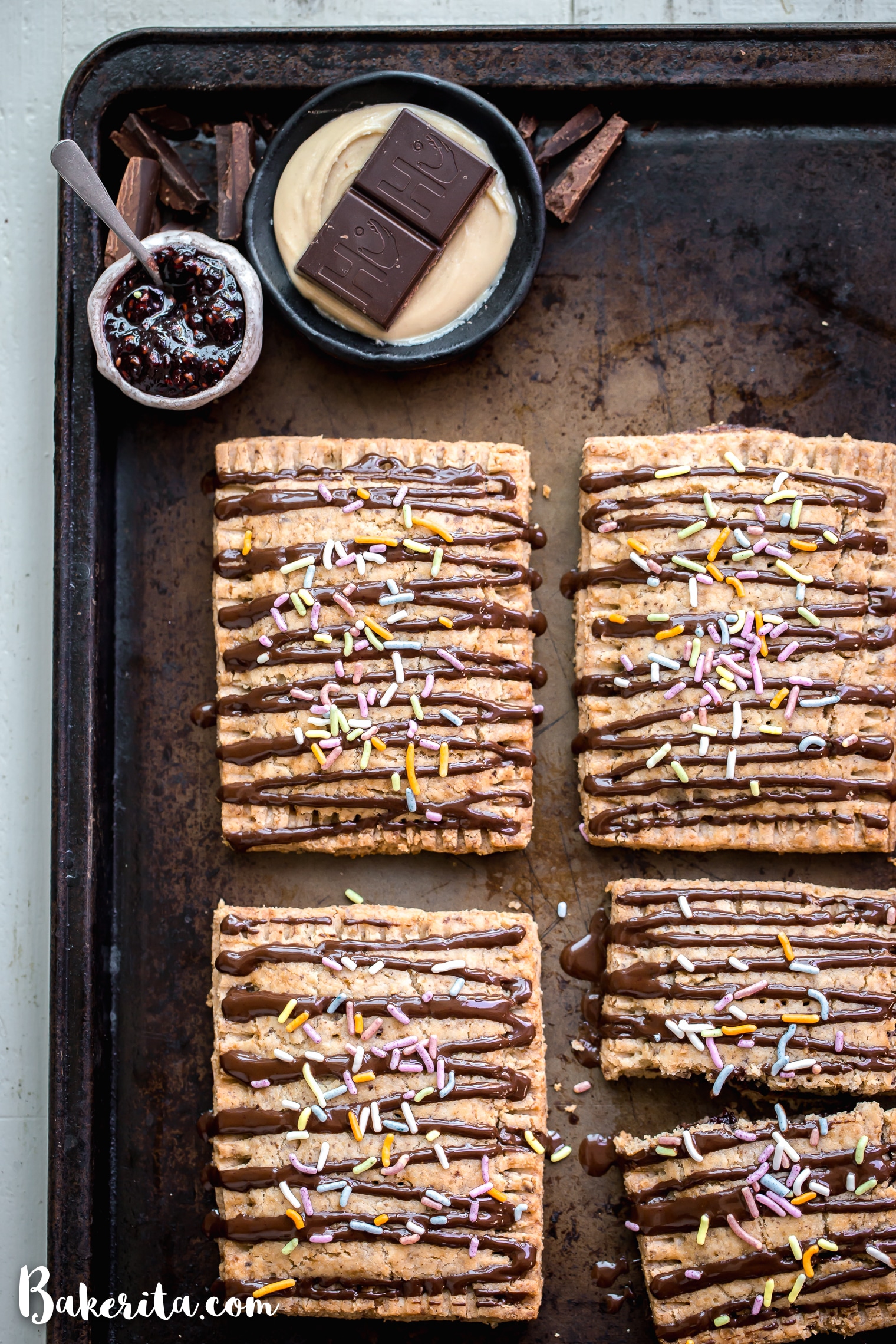 It certainly was delicious, with the sticky sweet marshmallow-like filling and the crunchy sprinkled glaze. But healthy? Or gluten-free? Or vegan? Certainly not. In fact, it usually made me feel pretty crappy and I would end up starving by lunchtime, just an hour later.

Since I started posting gluten-free/paleo/vegan recipes, I’ve been getting requests for a healthier version of a Pop Tart. I’m not the only one with nostalgic memories of them! And the time has finally come. 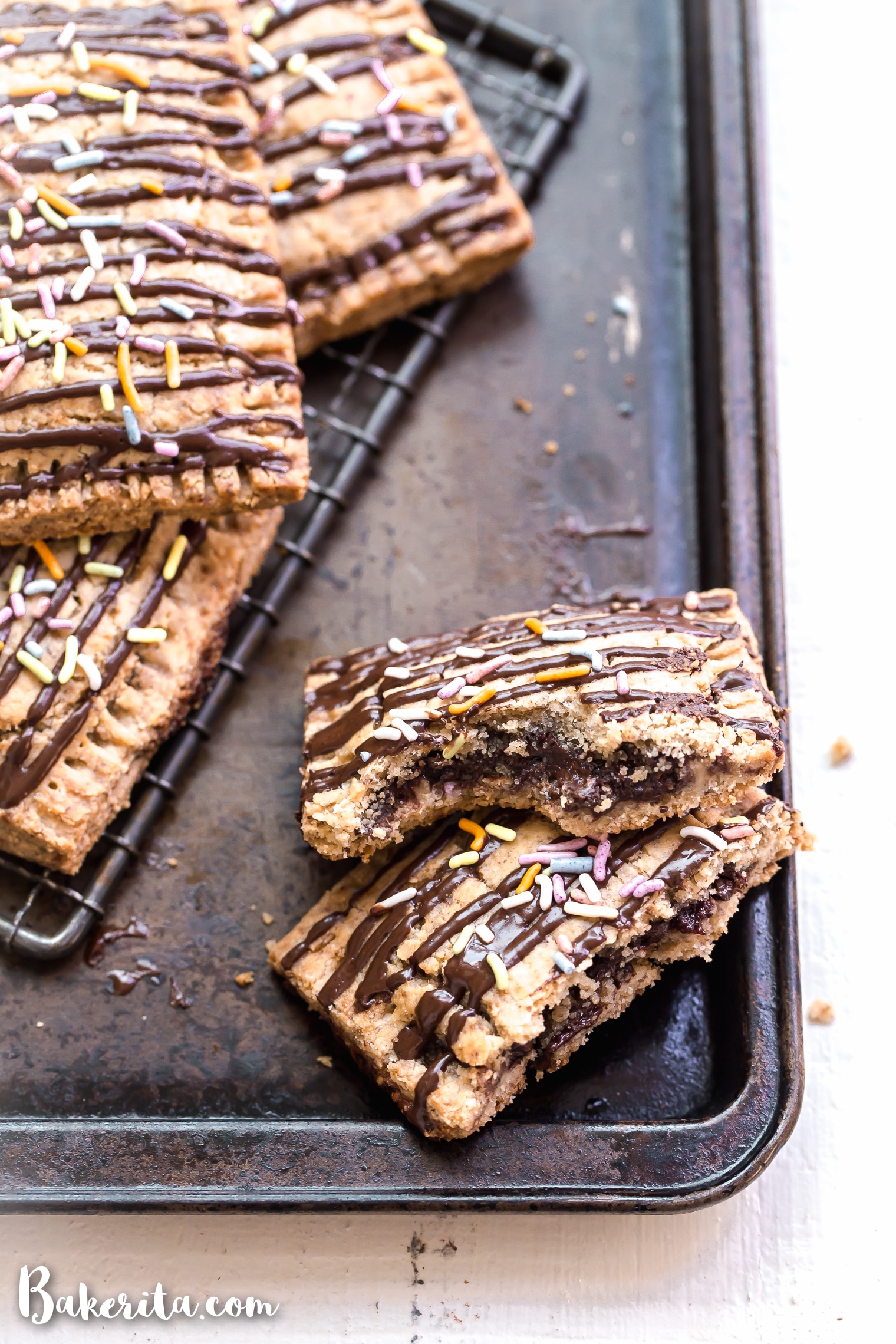 All the inspiration for these Chocolate Cashew Butter & Jelly Pop Tarts came from one of my favorite chocolate bars: the Cashew Butter & Raspberry Jelly Chocolate Bar from Hu Kitchen. The dark chocolate is filled with layers of cashew butter & raspberry jelly, and the whole thing is paleo, vegan, and coconut sugar-sweetened. It’s pure heaven. At night, you can usually find me on the couch with a cup of tea and a few squares of it.

But next to by itself, the best way to eat this chocolate is chopped up and tucked into a flaky crust. The flaky crust is both paleo and vegan. We make it with a combination of almond flour and cassava flour for the best, flakiest texture. It’s lightly sweetened with coconut sugar, and we cut in coconut oil the way you would cut in butter with a traditional pie crust. 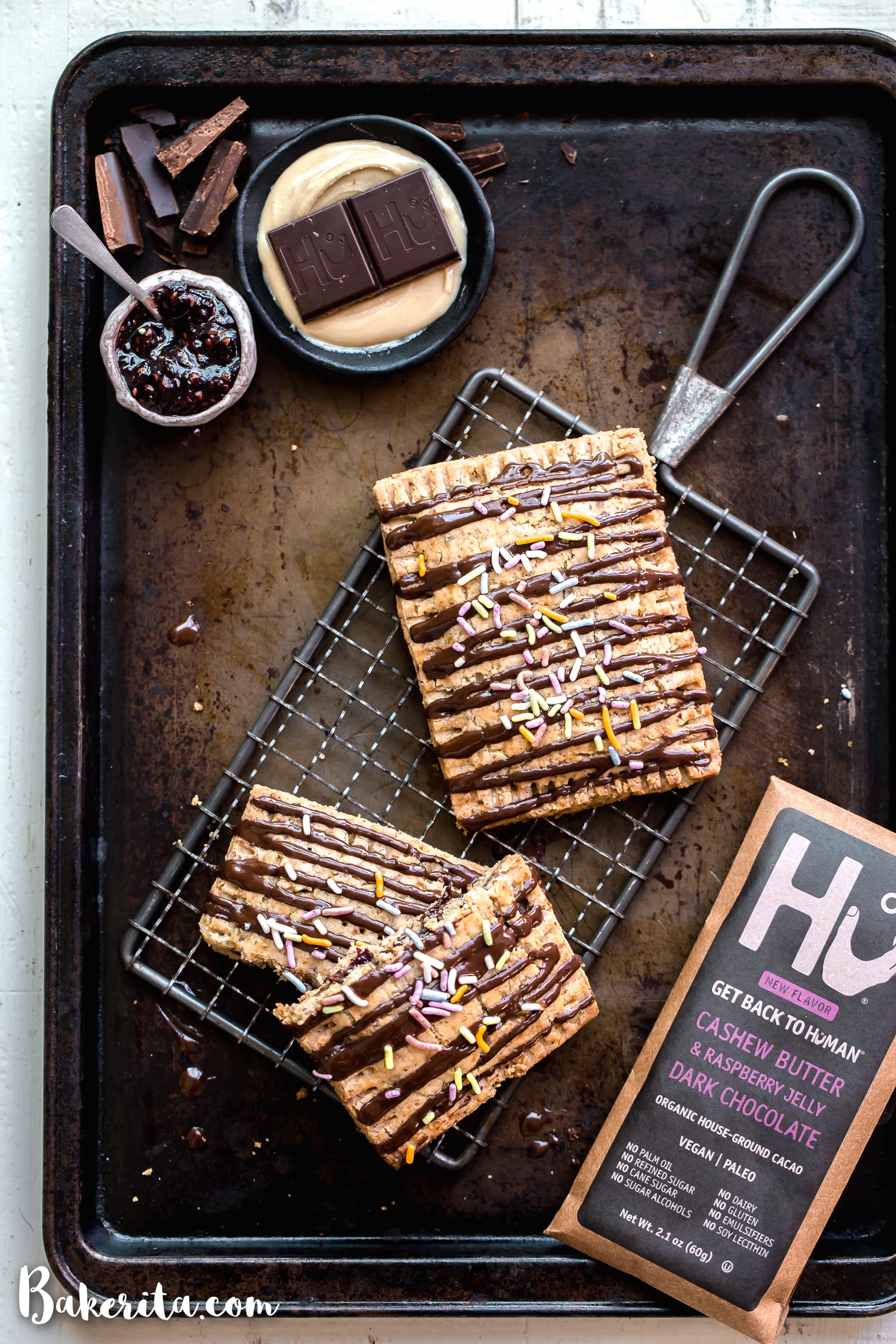 We roll out the crust into a big rectangle and cut it into sections. Then, we top half of those sections with the GOODS.

What do we stuff inside these Pop Tarts??

Then, we top it off with another layer of dough, seal it with a fork, and bake until golden. Drizzle on a little bit of melted chocolate, top with some naturally-colored sprinkles, and DEVOUR. 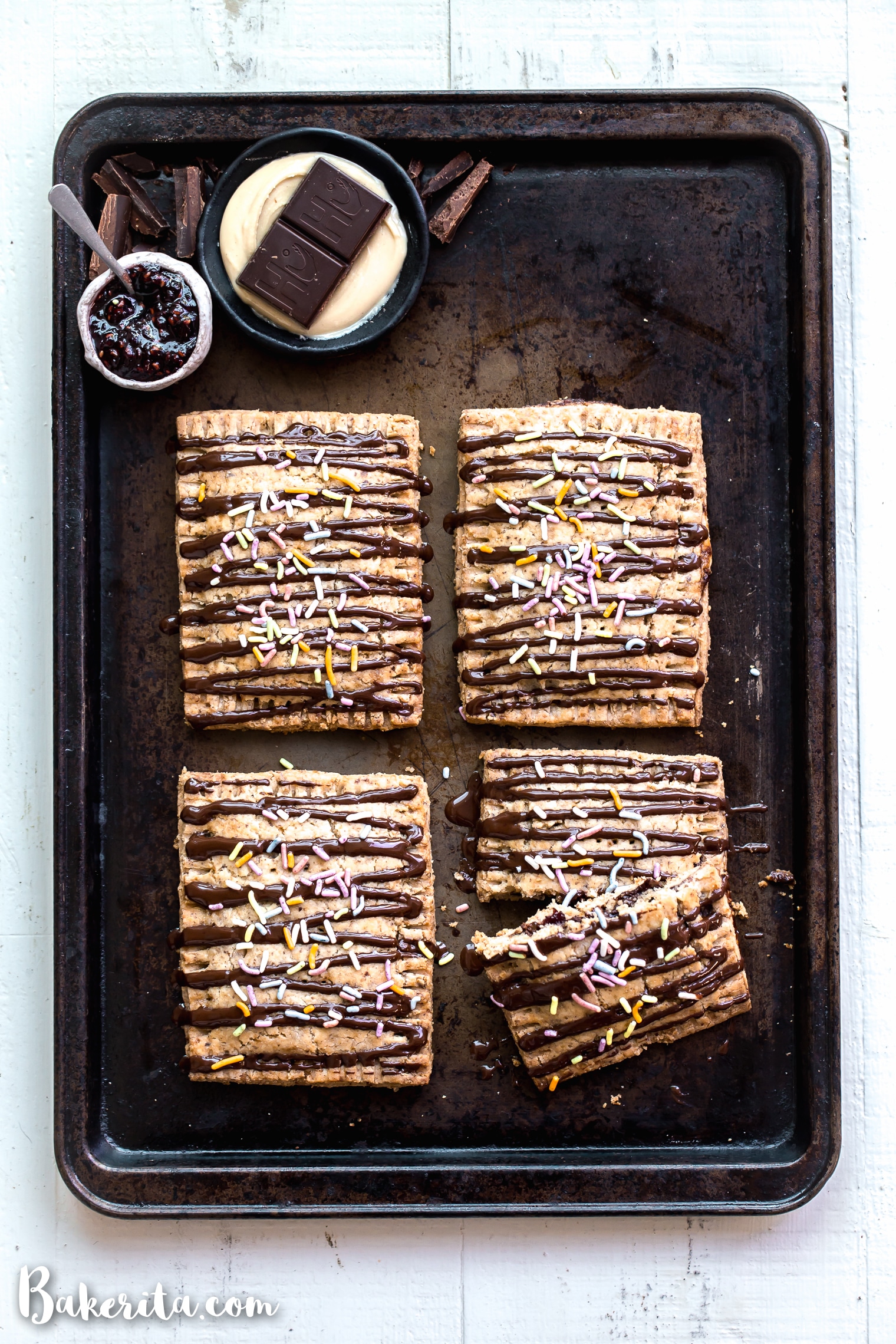 These Chocolate Cashew Butter & Jelly Pop Tarts are good cool but they’re phenomenal when they’re warm. All that delicious melted chocolate mingling with the cashew butter and tart raspberry jelly…MMMM. The flaky crust is what dreams are made of. The chocolate on top ties everything together. I hope you adore these healthier Pop Tarts as much as I did!

Make sure you tag me on Instagram @bakeritablog and #bakerita if you make this recipe!!

These Chocolate Cashew Butter & Jelly Pop Tarts are made with a flaky vegan and paleo crust and stuffed with cashew butter, raspberry jelly, and chopped d chocolate. You’re going to go nuts for these paleo & vegan copycat of your favorite childhood treat!

Thanks so much to Hu Kitchen for sponsoring this post, and to you for supporting the brands that support Bakerita. It allows me to continue to share recipes with you! 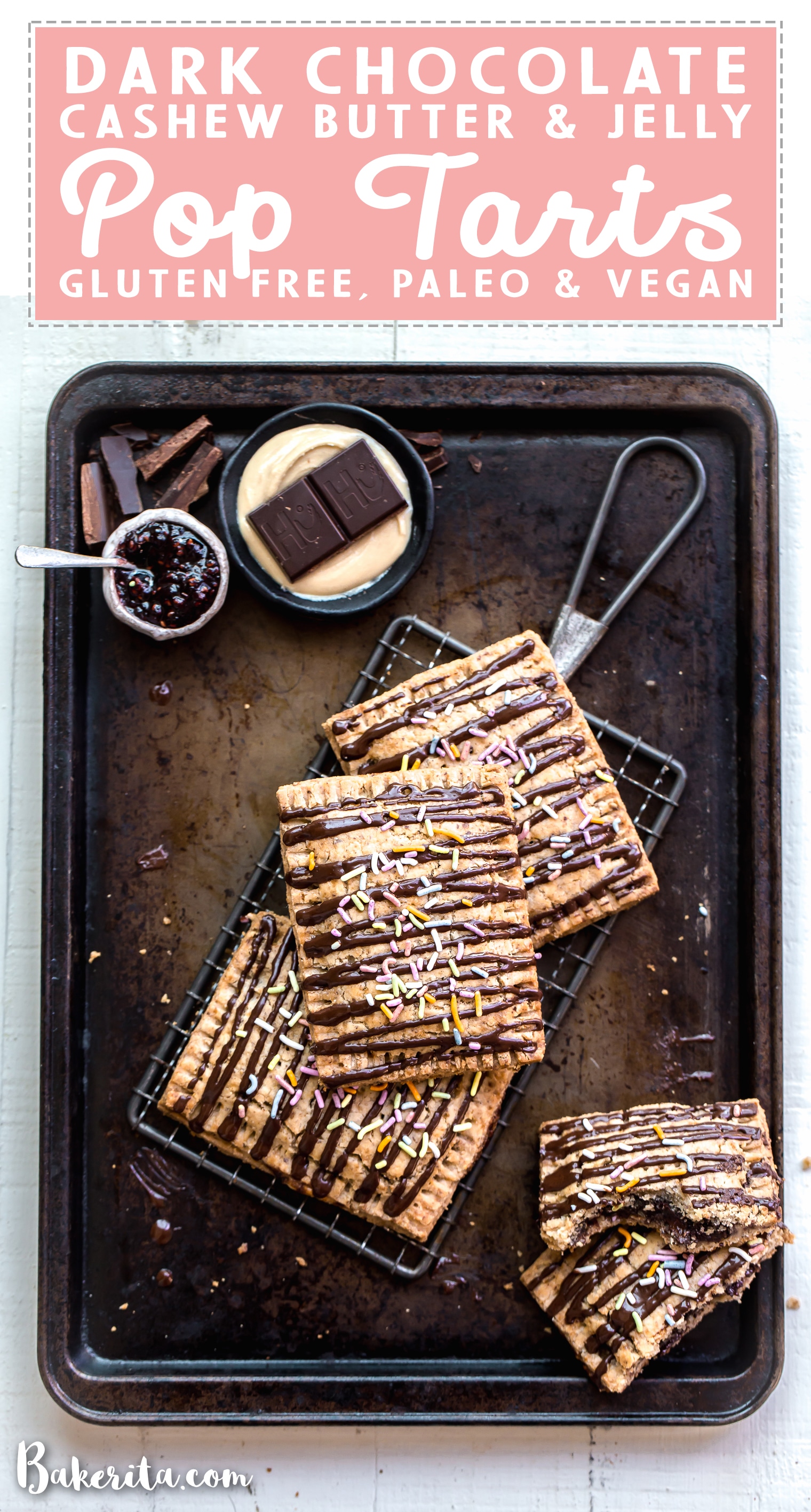