This Browned Butter Dulce De Leche Tart has a shortbread tart crust covered in dulce de leche, candied nuts, and topped off with a chocolate drizzle! 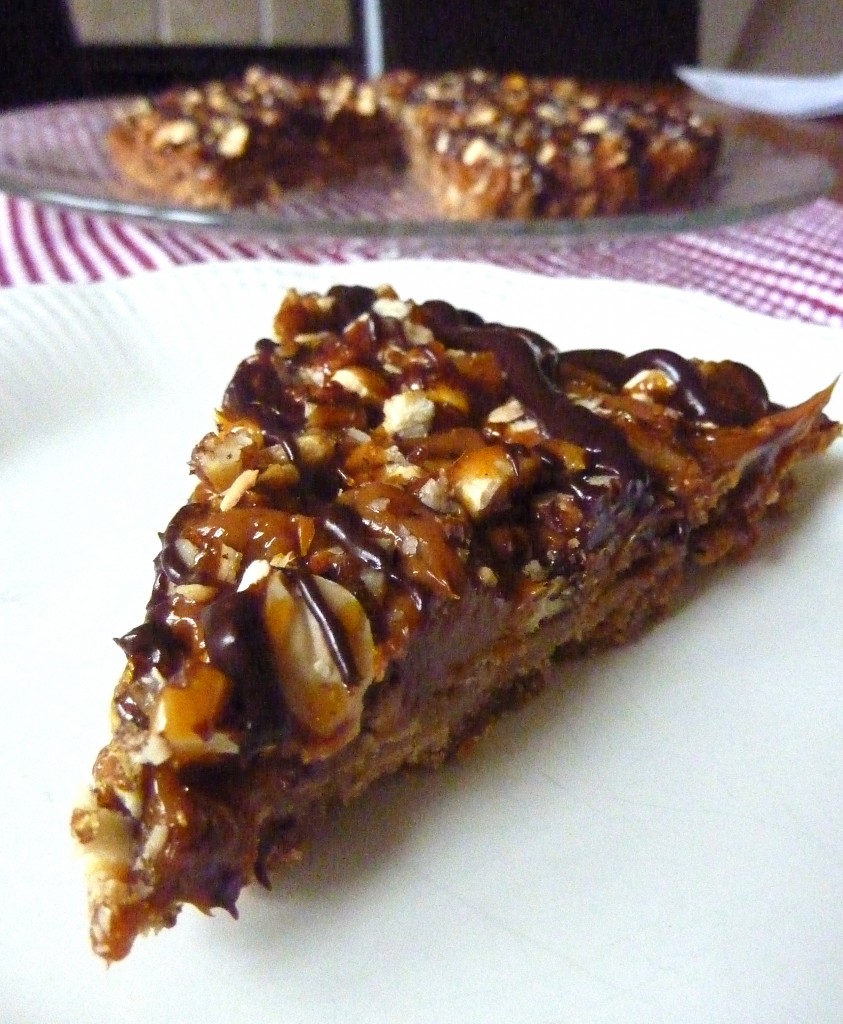 So, I have this favorite restaurant. It’s called Claire’s on Cedros and if you live in San Diego and you haven’t been there, something is seriously wrong with you. It’s AMAZING. Claire, the owner, has been a family friend for years and has always been an incredible baker. If you’ve ever heard of Milton’s Bread, yeah, that’s her recipe.

Ever since I was little whenever we would go to her house she always had the most incredible breads, baked goods, and more memorably, gingerbread houses. She made the most incredible gingerbread houses ever. They were insane. Her house would be covered in them. They were so intricate and beautifully made, but their is one in particular that’s stuck in my head. It was a log cabin with a front porch, a swing, and a little basket of apples. It looked like the kind of house you’d want to grow up in if you lived in the rural pacific northwest. It was amazing.

Anyways, back to the restaurant. Ever since she’s opened last year, I’ve wanted to work there, but she always said I couldn’t because I was under 18 and wouldn’t be allowed to work the equipment. However…she recently had an epiphany that there was stuff I could do! So she hired me! So far I’ve had two days there and it’s been amazing. Some of my tasks are a bit mundane – filling and weighing out bags of granola, putting stickers on bags – but I’ve also been doing things like decorating cookies, which is so much fun and definitely good practice, and helping Claire with her catering orders. It’s incredible being her assistant. She’s like a dream mentor – someone who never went to culinary school but owns a hugely successful restaurant. It’s amazing working for her. 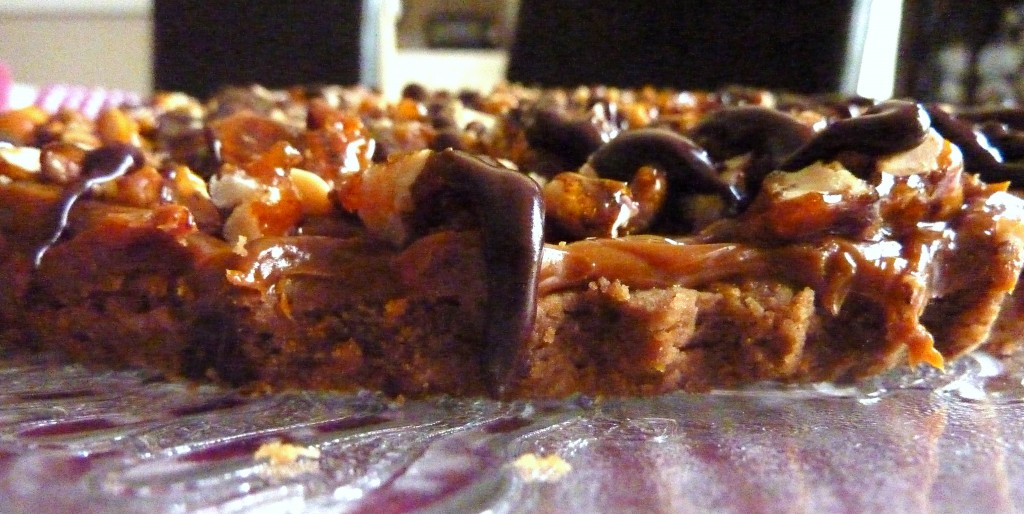 So meanwhile, while I’ve been at this job I’ve had a backseat look at all the baking and dessert-making they do at the restaurant. Claire is frequently creating new desserts, usually for catering events, and she happened to be recreating a tart she made for an event that had gotten rave reviews. It sounded – and looked – incredible. Tart dough filled with caramel, covered with macadamia nuts, and then covered in chocolate. Umm…YUM. It had me drooling, but it also had me thinking I should make more tarts. So I started brainstorming…but nothing too great came to mine.

When I got home though, I had a hankering for Lottie & Doof’s Brown Butter Shortbread so I whipped some up, put it in the tart pan to rest, and had an epiphany. The shortbread would be my tart crust! Fillings though. I wandered into my pantry and let my eyes rest upon my unopened can of dulce de leche. It was all coming together perfectly. I baked up the shortbread, spread on the dulce de leche, and then I considered covering in in chocolate, but nah. It needed something else. Boom! Candied nuts. I melted down some sugar and threw in the pecan and peanuts I had on hand. Then I drizzled, not drowned, the tart with chocolate. The Browned Butter Dulce de Leche Tart was born.

This morning, preparing to photograph, I cut a slice of my masterpiece. I took a few pictures and then called my mom down for a taste test. We both agreed – definitely the best thing I’ve ever made. Not kidding. It was that good. Heaven for dulce de leche lovers like us. It was insane. The browned butter  shortbread has a complex flavor on its own and gave some of that nuttiness and butteriness. The dulce de leche gave some smooth creaminess and sweetness. The candied nuts added the crunch and the chocolate tied it all together. It was elegant, gorgeous, delicious, and perfect. We loved it. We hope you will too. 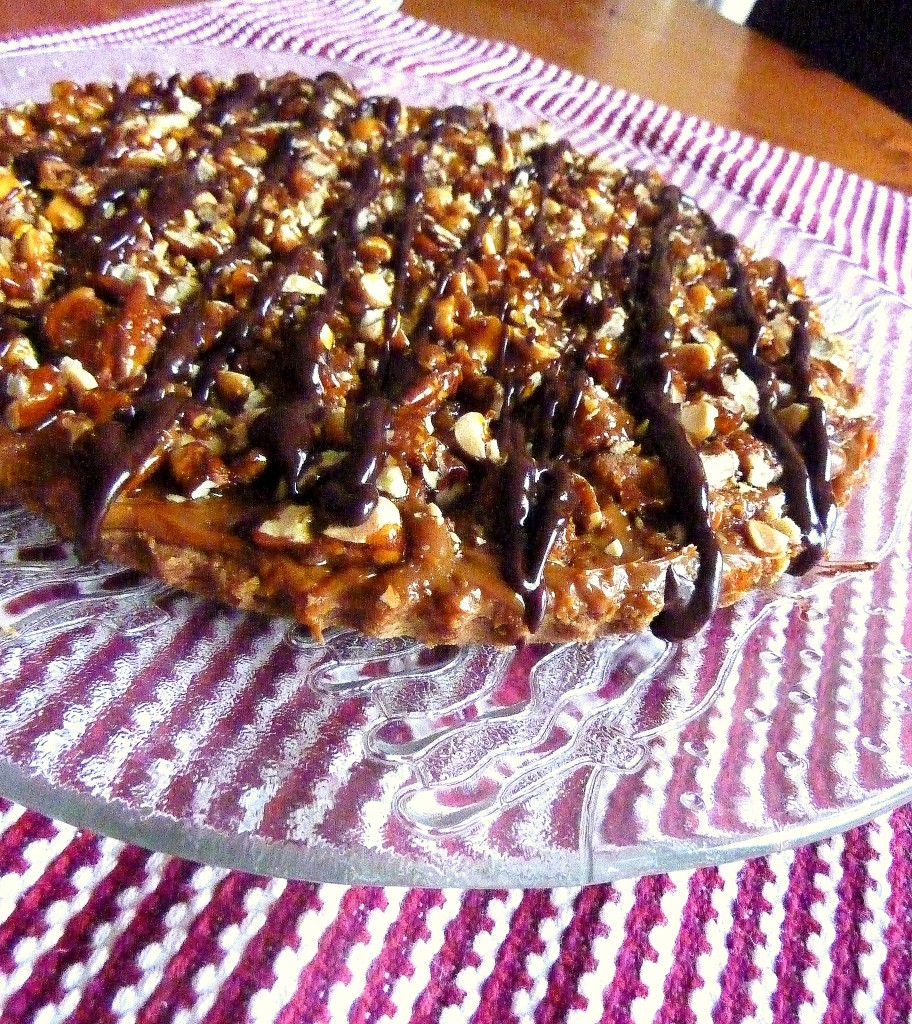