These Apple Cider Poached Pears in Cinnamon Sugar Puff Pastry are easier than you’d think, and use poaching liquid to make a caramel sauce! 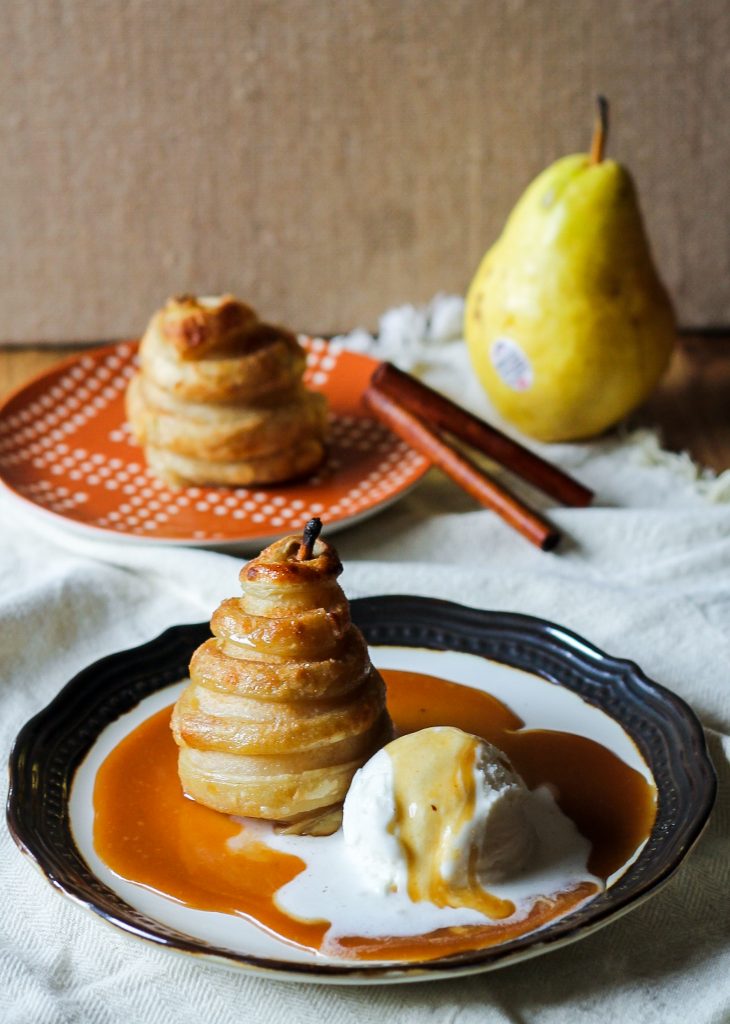 Apple Cider Poached Pears in Cinnamon Sugar Puff Pastry sounds sort of scary. Actually, just the word “poaching” sounds scary! Probably because poaching an egg is hard, poaching has gotten a bad wrap all around. But seriously guys, poaching pears could NOT be easier. The actual poaching process for these pears took less than 20 minutes (it could be up to 40 though, if your pears are larger!), but it’s so hands off. You’re just simmering pears in liquid. To wrap and bake in glorious puff pastry only took another 30, so we were enjoying these poached pears barely an hour after I started them. And that includes the extra time I had to take pictures. Seriously, you can be enjoying these so soon.

Uh, and in that time…you’re also MAKING CARAMEL. 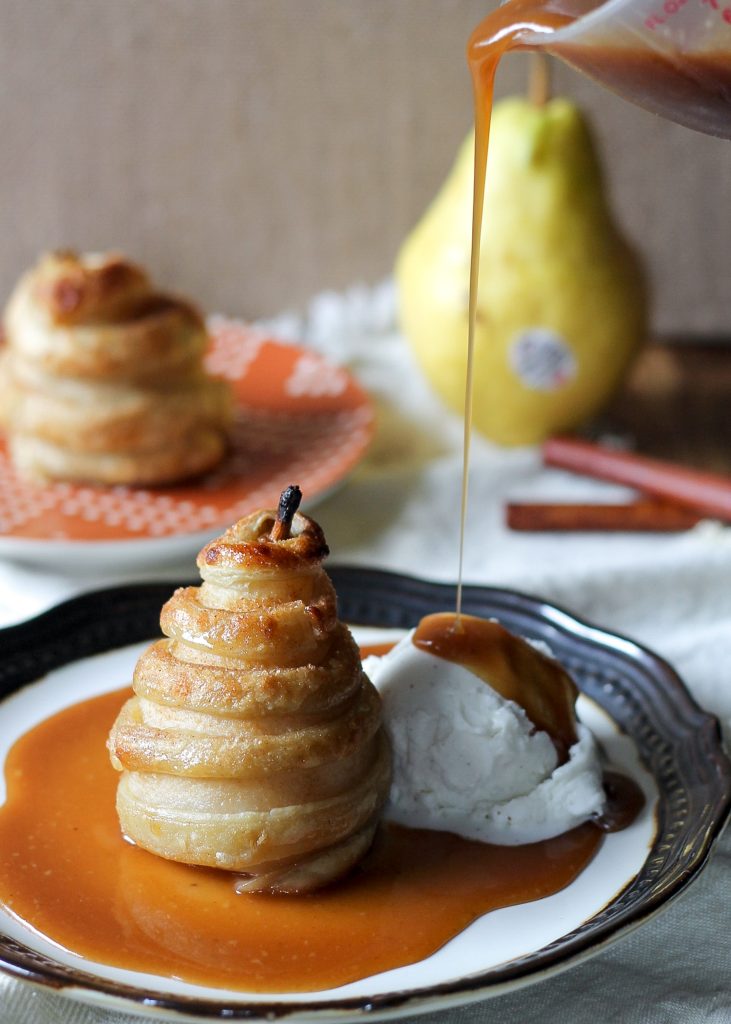 See…I couldn’t bear to throw the delicious smelling cinnamon stick-infused apple cider poaching liquid away, so I kept some of it, and reduced it down with some heavy cream, butter, and sugar for a seriously amazing apple cider caramel sauce. It’s the perfect thing to complement your poached pears, and it’s so easy.

I’m all about adding a little crunchy something extra to every dessert, so I wanted to make my poached pear extra special. The puff pastry is the perfect something special! I love the way it looks, and I sprinkled mine with a little cinnamon sugar for an extra sugar-y crunch. That sugar gets just a little caramelized in the oven, and makes it perfectly crisp and sweet. 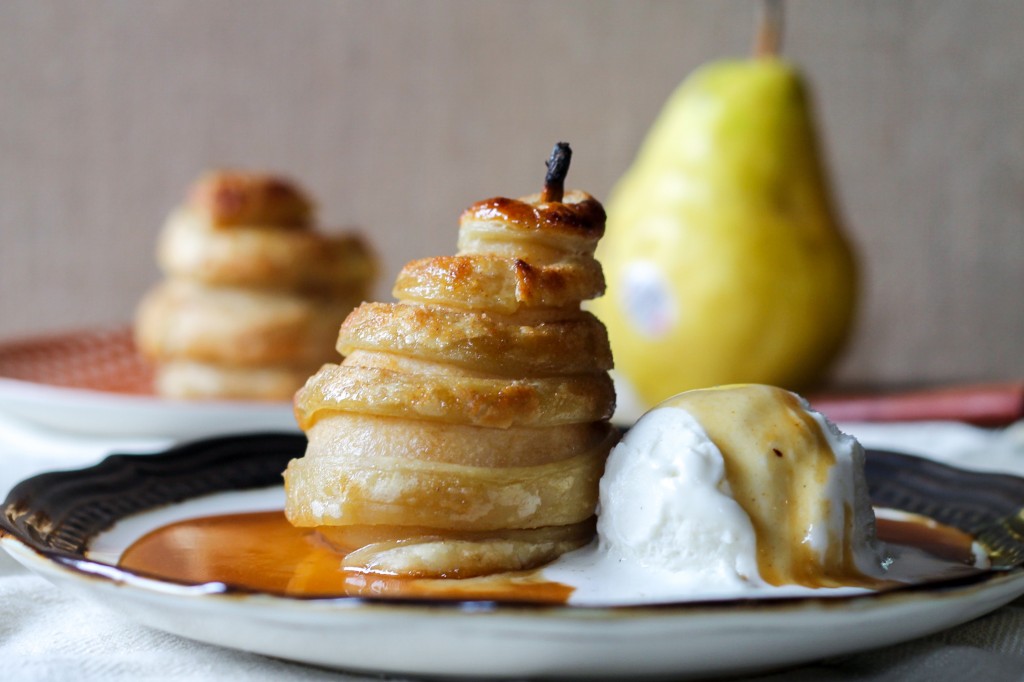 And let’s talk about the stars of the show a little: the pears! I, personally, think that pears are totally underrated. When pears are good, they are sooo good. There’s nothing like a juicy, dripping-down-your-chin pear! Did you know you can check the ripeness of the pear by pressing gently on the narrow “neck” of the pear with your thumb? If it yields to pressure, it’s ripe! But underripe pears…not as good.

That’s where poaching comes into play. It’s perfect for underripe pears, and so versatile. You can poach in pretty much any sweet liquid you want. I’m thinking coconut milk would be delicious, or hot chocolate?! Unlimited options (I’ll definitely be experimenting). 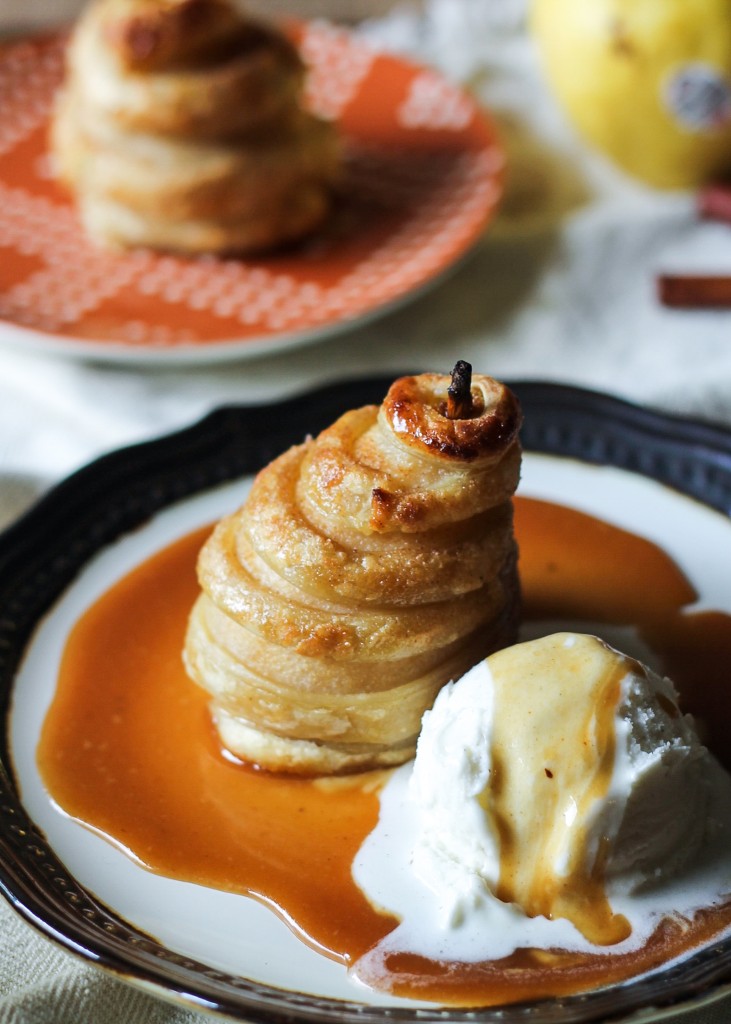 Right now is the best time for pears too! There’s so many good varieties from USA Pears, over 10 varieties are being harvested right now. I used Comice pears, but use whatever your favorite variety is.

If you want a delicious, quick, impressive, and majorly delicious dessert, try these Apple Cider Poached Pears in Cinnamon Sugar Puff Pastry. They’ll be sure to impress! Enjoy :)

I was selected for this opportunity as a member of Clever Girls and the content and opinions expressed here are all my own.