These Vegan Potato Skins are my new favorite vegan appetizer! Baked instead of fried, these are a healthier take on the classic. They’re made with vegan cheese sauce and the best tempeh bacon bits. 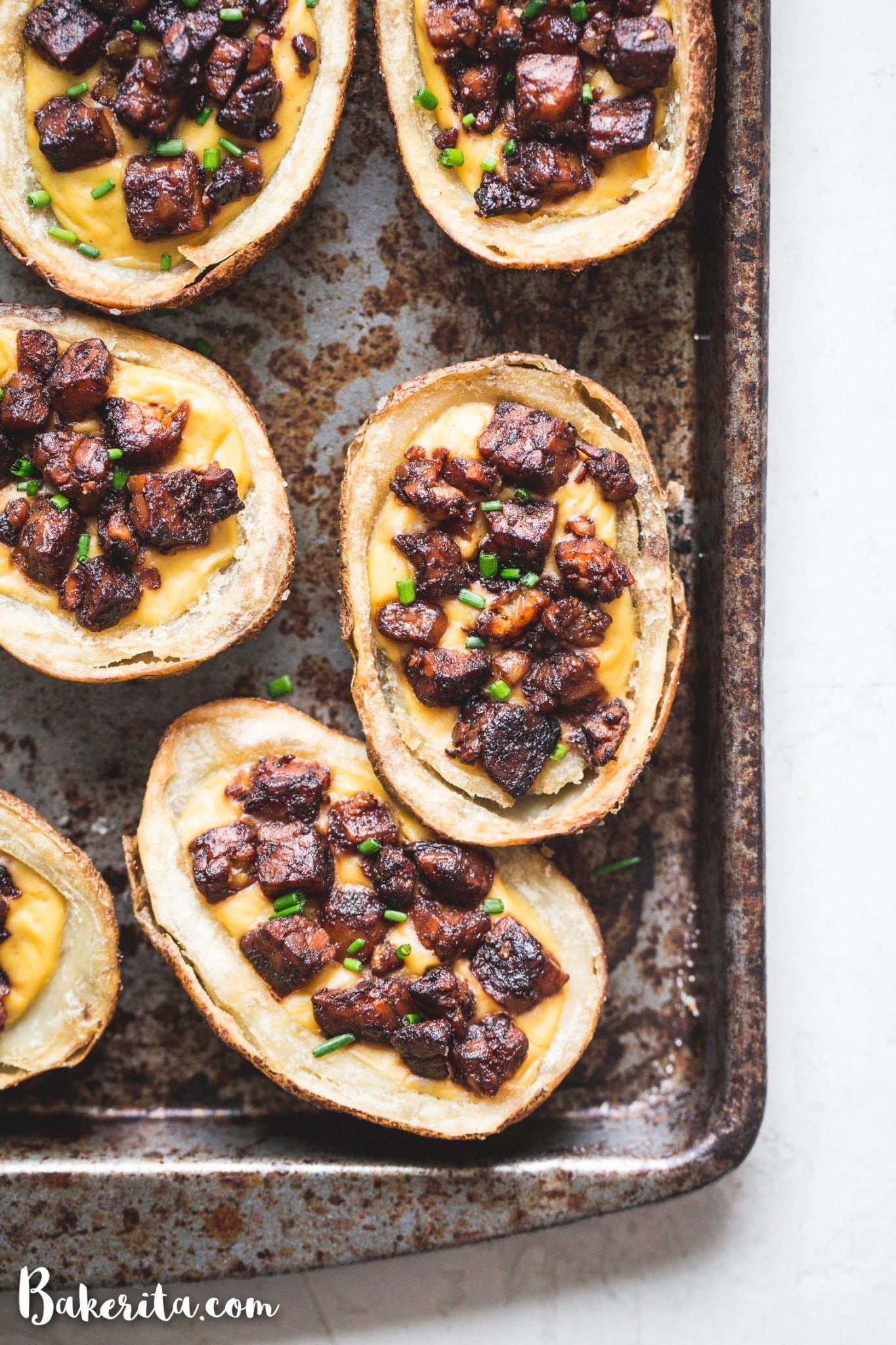 Growing up, my diet wasn’t the healthiest. My parents got divorced when I was 5, and while we ate healthfully at my mom’s thanks to her great cooking, there were NO rules at my dad’s. He didn’t know anything about nutrition at the time, which meant lots of frozen dinners, Lunchables, mac and cheese, sour straws, Red Vines, and my favorite – frozen TGI Friday’s potato skins.

I could demolish a whole box of them on my own, easy. Loaded up with bacon bits and a creamy cheddar cheese sauce, all piled onto potato skins? YES, please. I always ordered them at restaurants when they were on the menu, too. 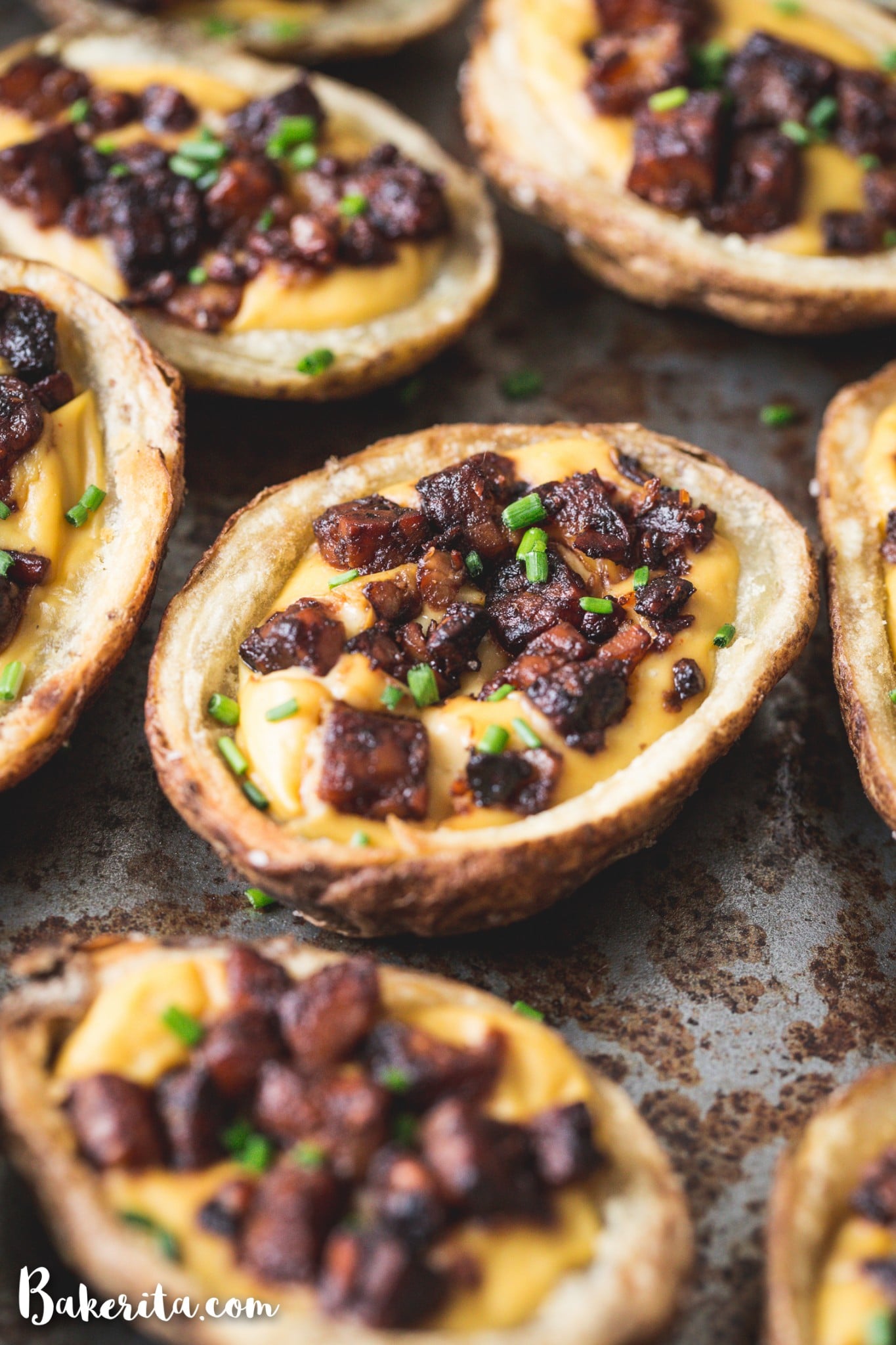 Fast forward a few years, and my dad’s girlfriend at the time gave our kitchen an overhaul, much to the dismay of my sister and me. She got rid of most of our packaged food and showed us newer, healthier ways of eating. At the time, we were annoyed, to say the least, and not the biggest fan of the replacements for our sugar and preservative-laden treats.

But now? I see that her kitchen overhaul was the first step towards my sister and I’s interest in healthy living. While it took us a while to get to a place of healthy eating on our own, it has helped to shape both of us and the way we look at food. 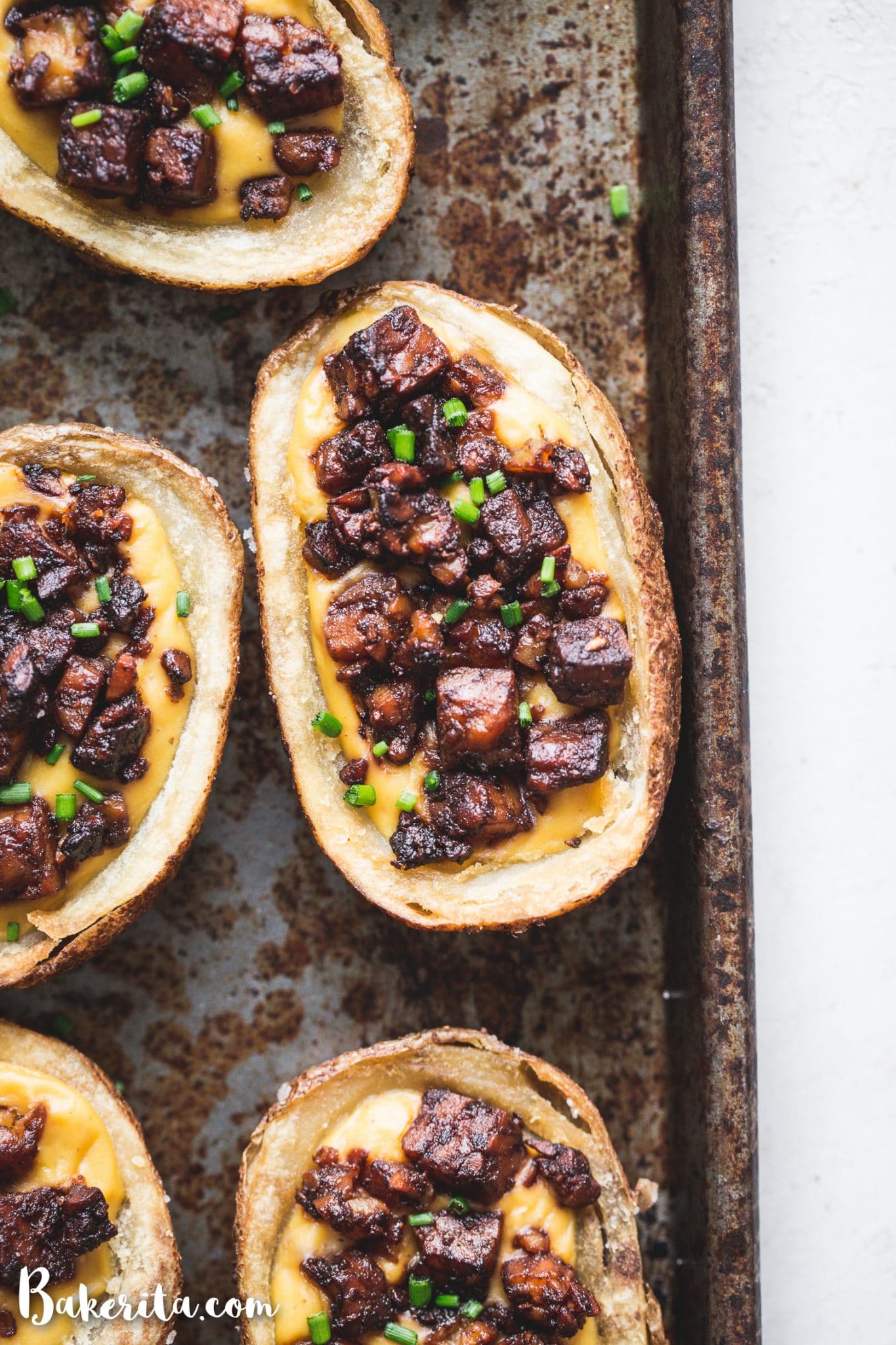 I’ve learned enough about my body and the foods that make it feel good to know that eating frozen potato skins wouldn’t make me feel the best…but I still have a nostalgic place in my heart for those delicious, salty foods. Frozen potato skins don’t tend to come to mind when we think “health”. So, what to do but turn them into healthy food, right?!?!

Looking at my favorite potato skins, we have three main ingredients: potatoes, cheese sauce, bacon. Only one of those things is inherently vegan, but all of them are able to be recreated in a healthier, vegan way that will be just as delicious. In addition to being vegan, this recipe is also gluten-free, grain-free, refined sugar-free, and can be made nut-free as long as you use a nut-free cheese sauce. 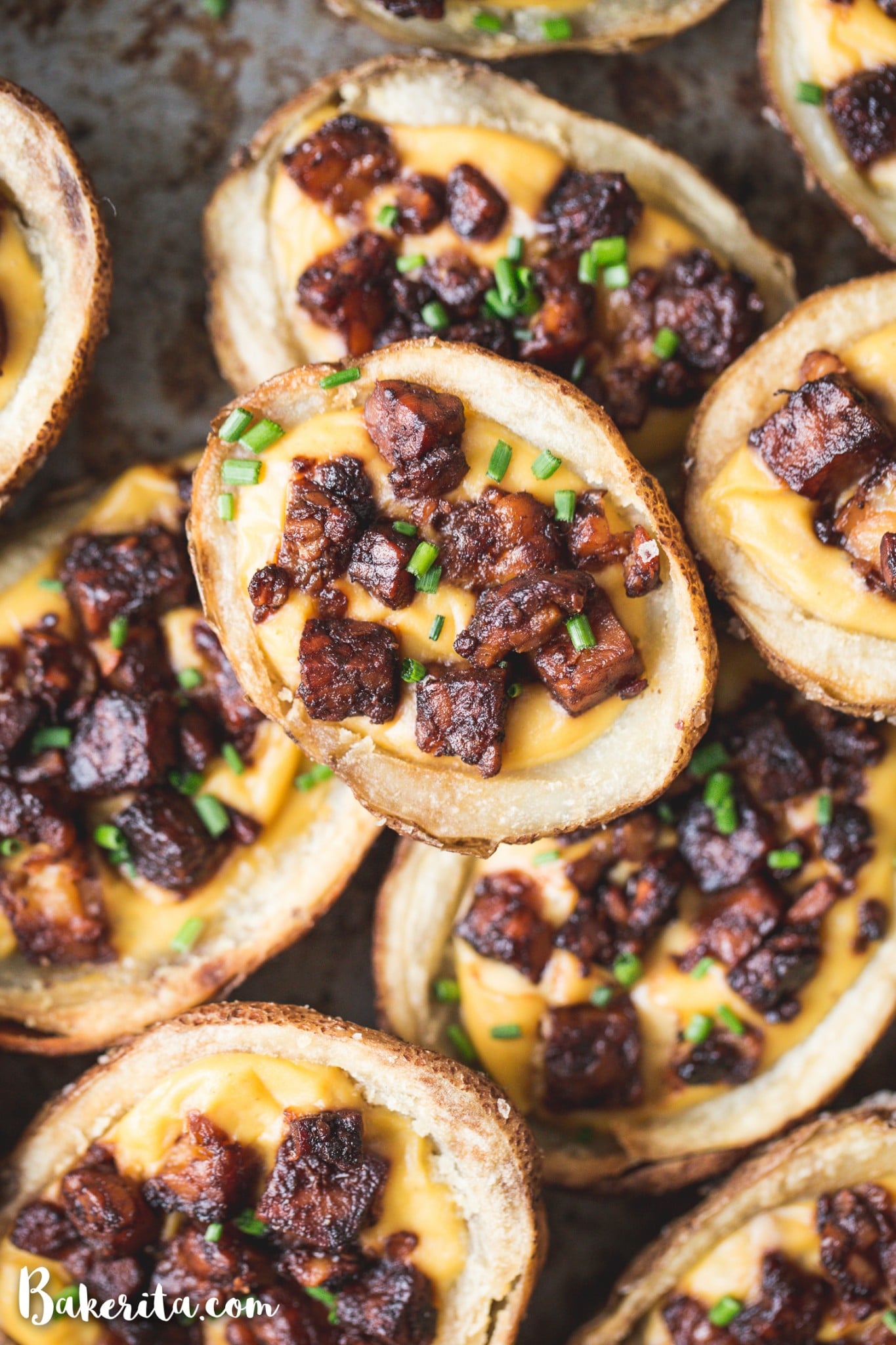 Potatoes: the prep for these vegan potato skins is similar to the way they’re traditionally made, but we’re baking them instead of deep-frying. First, we’ll bake the potatoes until crispy on the outside. Then we’ll let them cool, cut them in half, scoop out most of the fluffy insides, and rebake the skins until crispy before filling! 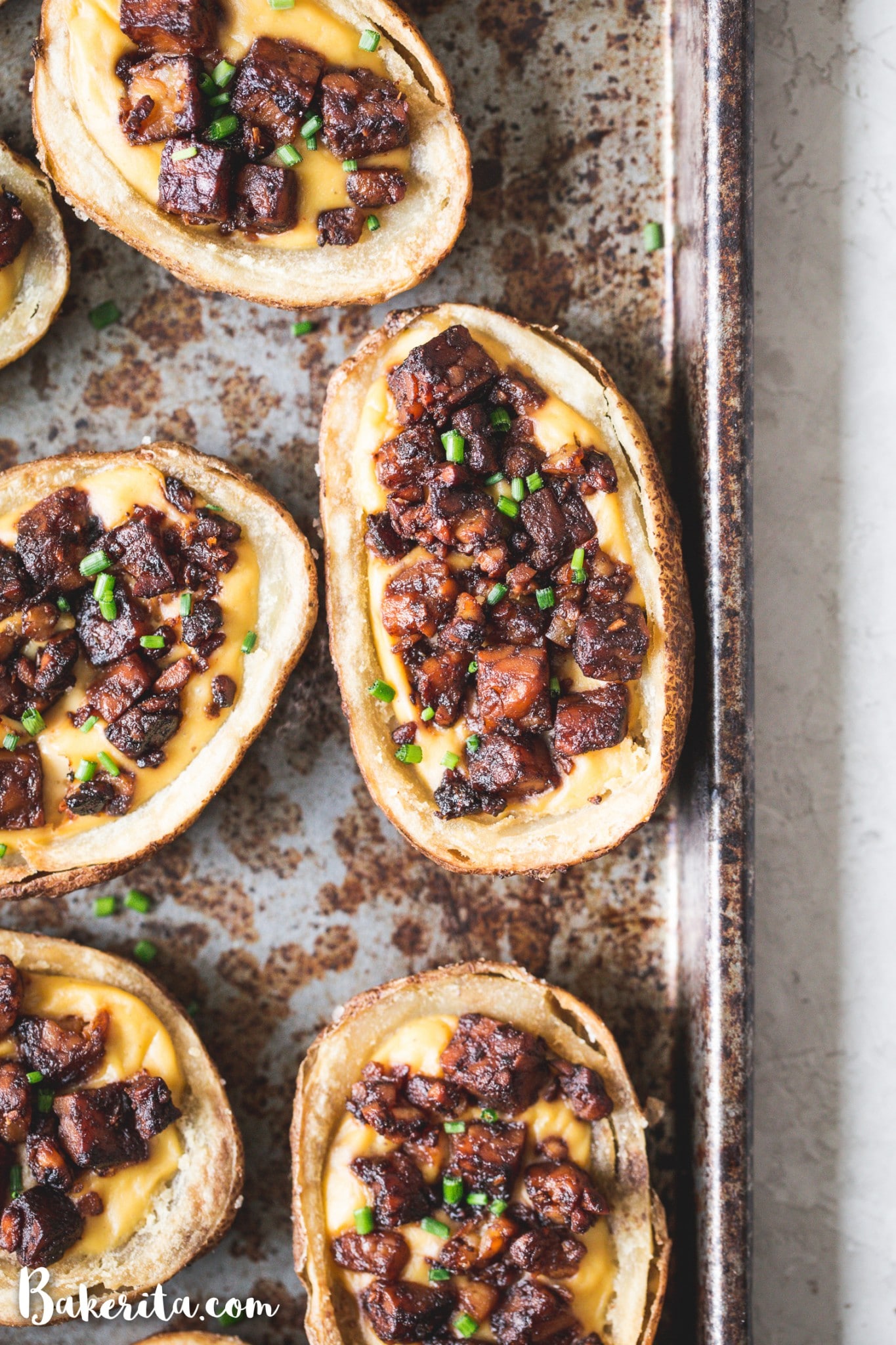 Bacon Bits: these easy tempeh bacon bits are my new favorite thing. To make, we simply crumble the tempeh and marinate it in a combination of tamari, apple cider vinegar, liquid smoke, maple syrup, smoked paprika, and ground cumin. The liquid smoke and smoked paprika really help with that smoked, bacon-y flavor. This is the liquid smoke that I use because the only ingredient is natural smoke concentrate – no funky artificial ingredients!

When layered together and topped off with chives or green onions…you’ve got a perfect vegan potato skin! They are my new favorite vegan appetizer…and those tempeh bacon bits !!! You’ll want to put them on all the things. I hope you adore these as much as I do! 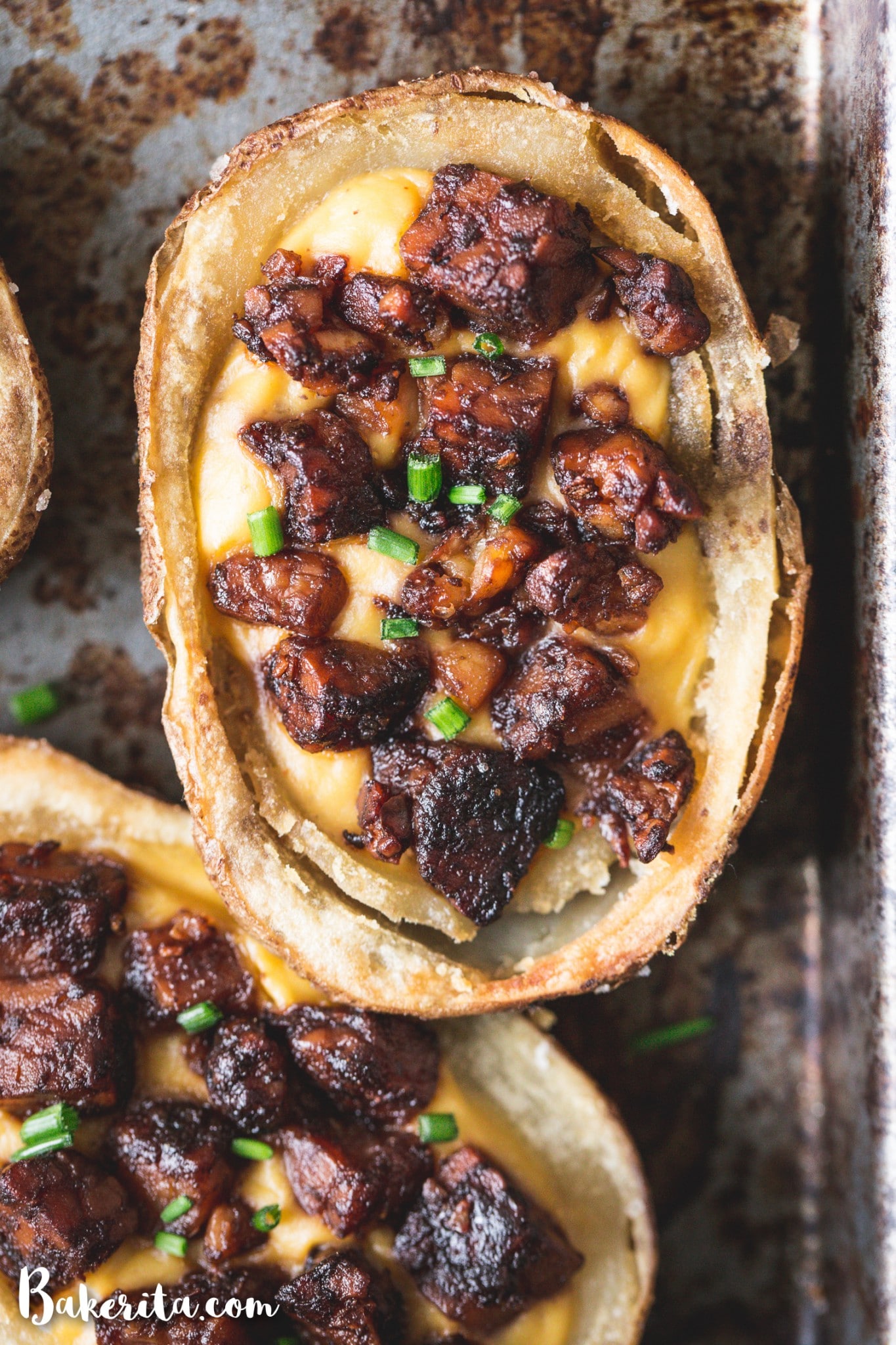 If you love this recipe, you’ll love these too:

If you make these vegan potato skins, please leave a comment below and rate the recipe on the recipe card – I’d love to hear what you think. If you feel so inclined, please share your photos with me on Instagram, tag @bakeritablog and #bakerita. I love seeing your recreations!

These Vegan Potato Skins are my new favorite vegan appetizer! Baked instead of fried, these are a healthier take on the classic. They’re made with vegan cheese sauce and the best tempeh bacon bits.

For the potato skins

For the tempeh bacon

We won’t be using the potato insides for this recipe, so you can use it to make the vegan cheese sauce, mash it up to make a small batch of mashed potatoes, or add it to soup, curry or stew. 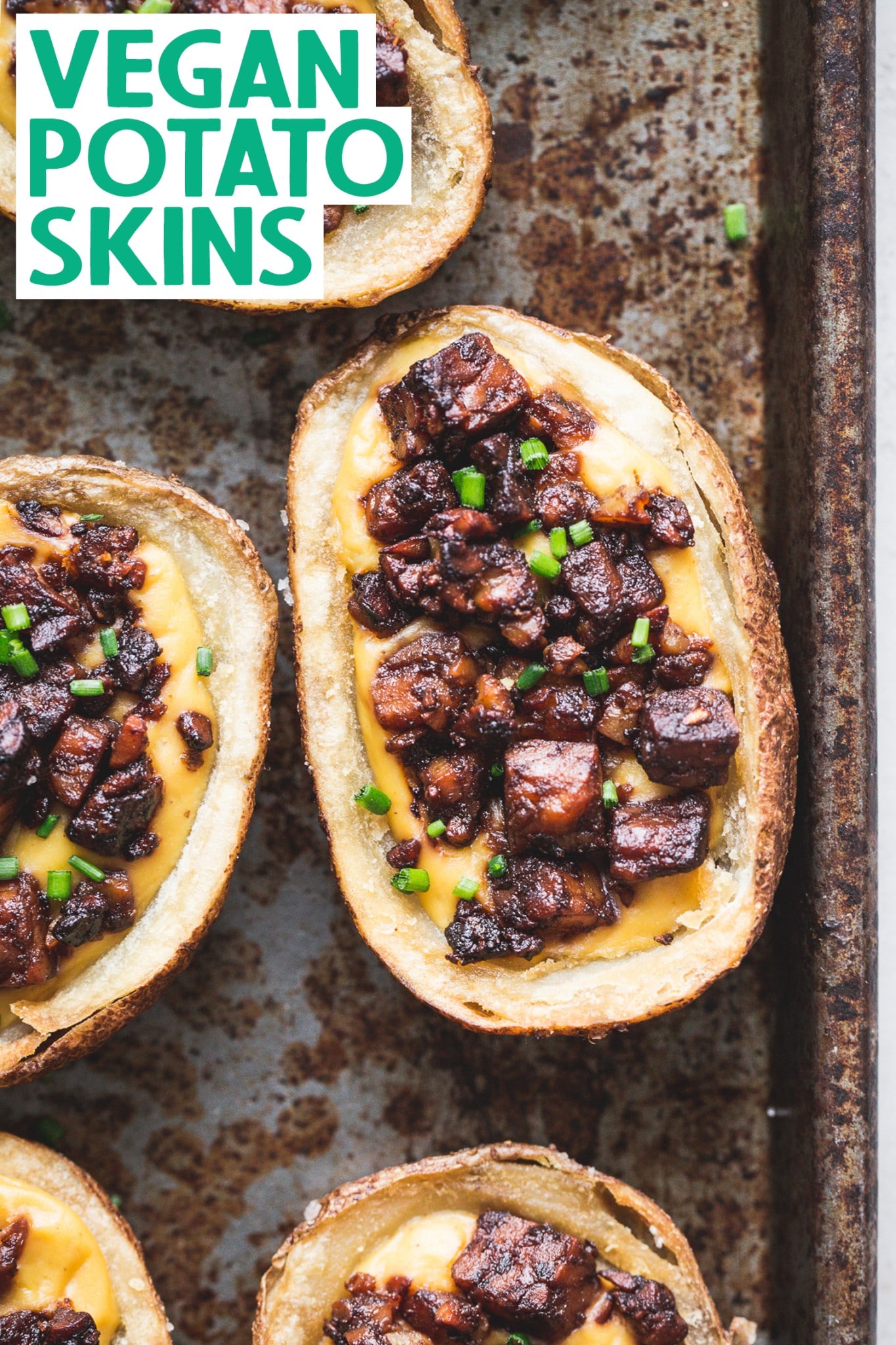