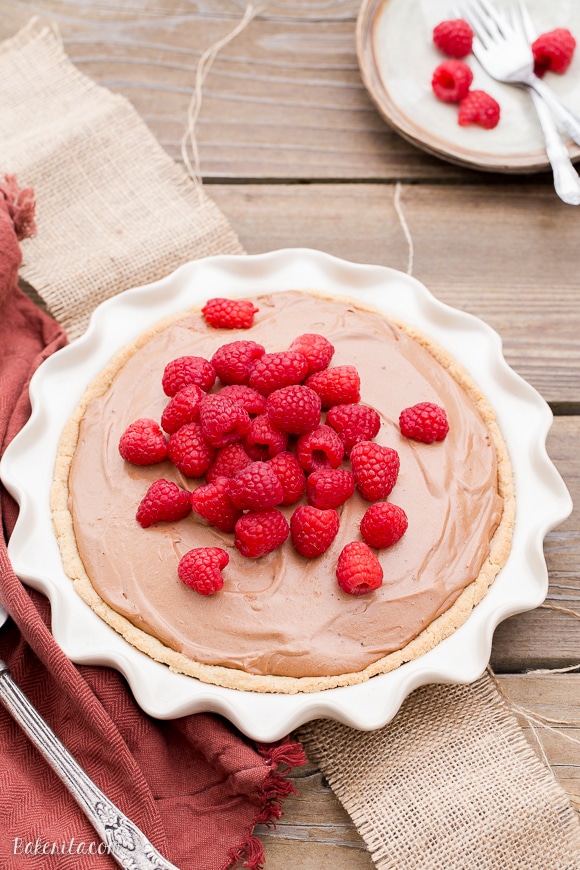 this recipe
Tonight, I’m leaving on a red-eye flight from San Diego to Athens, Greece and I could not be more excited. I have been wanting to go to Greece for many years…mostly because I’m pretty sure I could eat Greek food all day, every day and never get sick of it.

Athens is the first stop on a cruise through the Mediterranean, Italy, and ending in Barcelona, Spain – one of my favorite cities in the world. We have an extra few days before and after the cruise to spend time in Athens and Barcelona, respectively, and I can’t wait to eat my way through all the cities 😋 You can bet I’ll be Snapchatting as much of the trip as possible, if you want to follow along :) my username is bakeritablog. 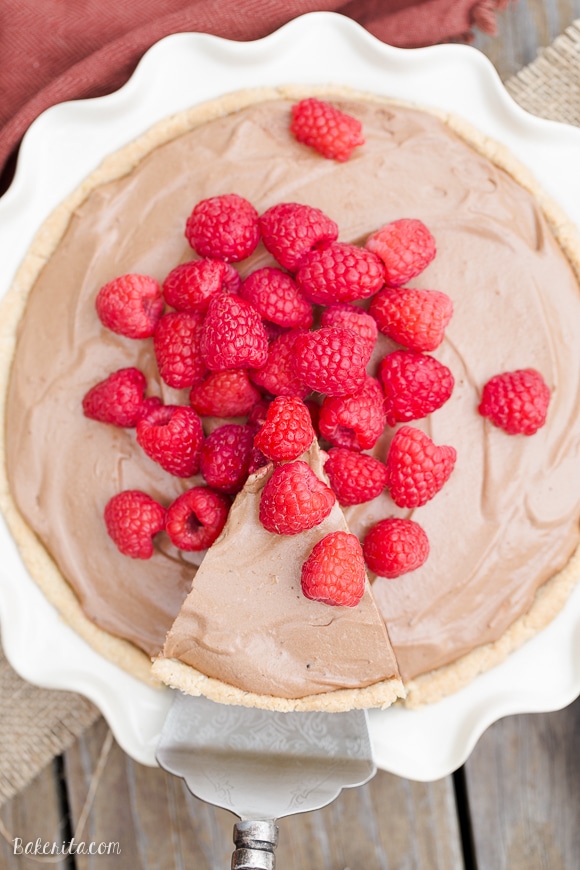 While I’m gone, recipe posts will be going up as per usual but I doubt I’ll be able to spend much time on my computer, so my apologies if comments go unanswered through July 4th! Without further ado, let’s talk about the beautiful raspberry french silk pie gracing your screen!

This recipe comes to us today courtesy of my friend Monica from The Movement Menu! Monica lives in San Diego and we met for lunch earlier this year when I was visiting home and reconnected again a few weeks ago at the Everything Food Conference. She is an amazing Paleo chef and baker and she has a beautiful Paleo Baking cookbook coming out in September. 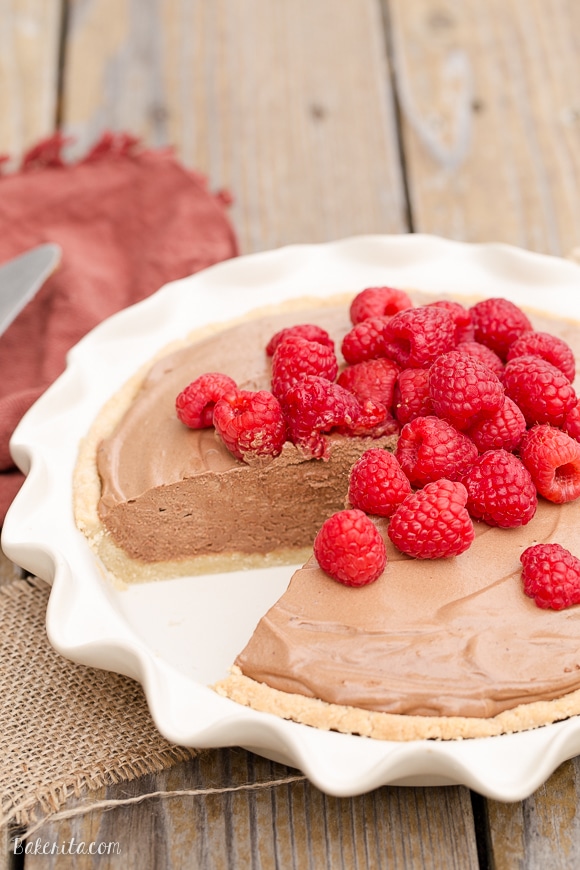 When she asked if I wanted to try a recipe or two before the book officially came out and share it with you all, I jumped at the chance to try some of the swoon-worthy looking desserts she has in the book. I immediately gravitated towards the beautiful Fresh Raspberry French Silk Pie to try out, and the clean plates proved I chose correctly.

The crust is made with almond flour, melted coconut oil, sea salt and an egg and it held together so well – I was amazed. I normally make SUCH a mess cutting pies and the crust ends up all torn and messy…but this one turned out perfectly. Unable to contain my excitement over the beautifully cut slice, I texted Monica right after cutting it to share my enthusiasm. She credited me at being good at slicing pie – I’m crediting the crust. 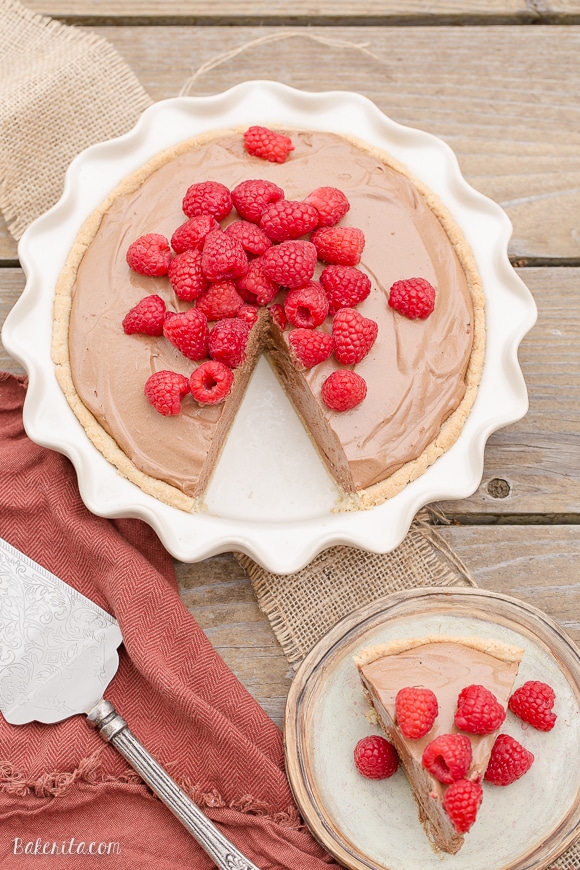 And oh my goooodness, that filling! The recipe calls for high quality dark chocolate so I grabbed some Alter Eco Blackout chocolate I had and even though the chocolate is a super dark 85% cocoa, the coconut sugar in the filling balanced out the sweetness perfectly.

After beating the butter and coconut sugar together for a while, I was nervous the coconut sugar would stay a little gritty, but after beating in the eggs, it was perfectly light, fluffy, and smooth. The filling takes a little bit of time by your stand mixer, but letting each ingredient get well beaten before adding the next is key to a perfectly creamy and fluffy French silk pie. 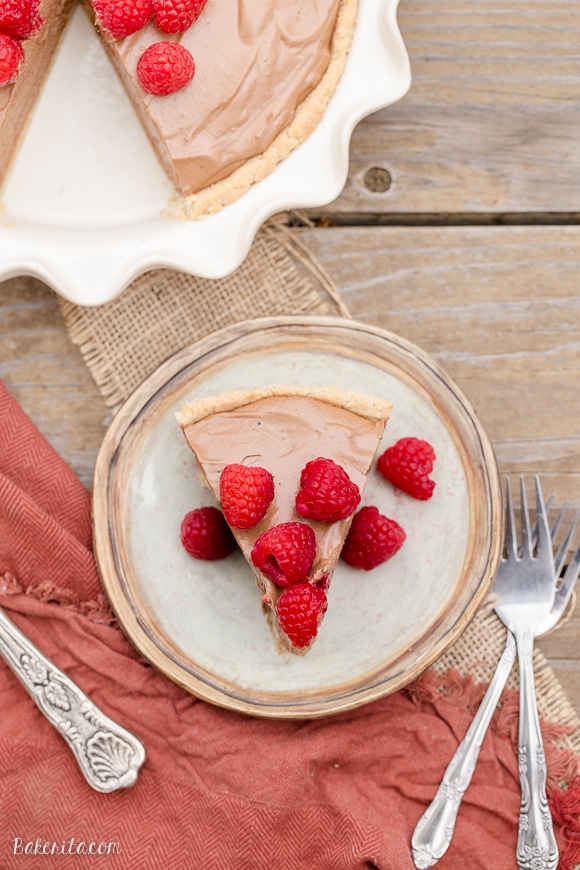 After the luscious filling is spread into the pie crust, it’s left to chill overnight. << That’s the hardest part of this whole process, but unfortunately, it’s necessary. Once chilled, you’re ready to cover with raspberries, slice, and serve!

For extra smooth slices, I ran the knife under scalding hot water before cutting – it’s a little trick I love to use when cutting something with a creamy filling because it helps the knife slide right through. The crust was super firm and sturdy which made cutting even more of a breeze, so you can get to the devouring part more quickly! 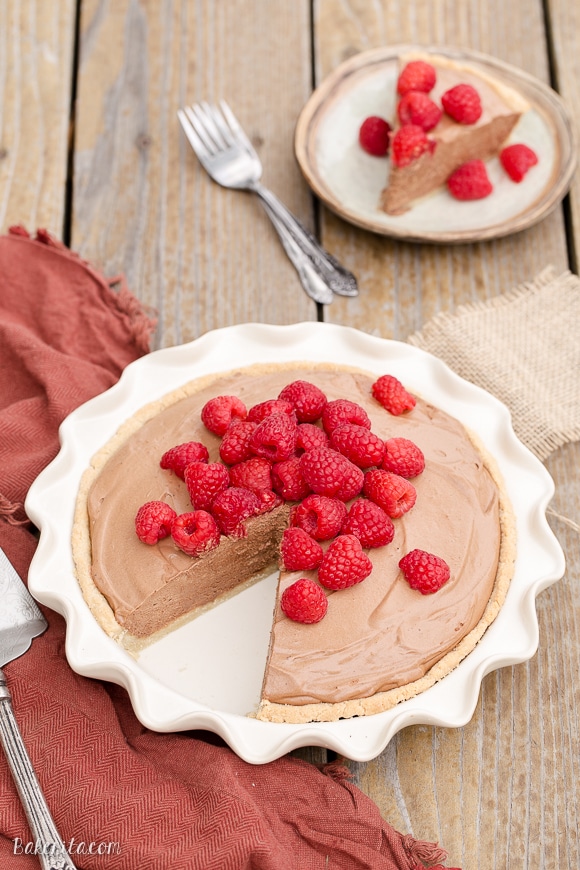 You’re definitely going to want to give this one a try, and be sure to preorder Monica’s beautiful Paleo Baking cookbook to try all the amazing recipes she’s developed. Enjoy!

This post is not sponsored, but it does contain affiliate links – thanks for supporting Bakerita!