These Paleo Apple Spice Marshmallows are sweetened with maple syrup and flavored with apple juice + loads of warm spices! Homemade marshmallows are easier than you’d think, and you’ll love these on their own or as the perfect apple cider addition. 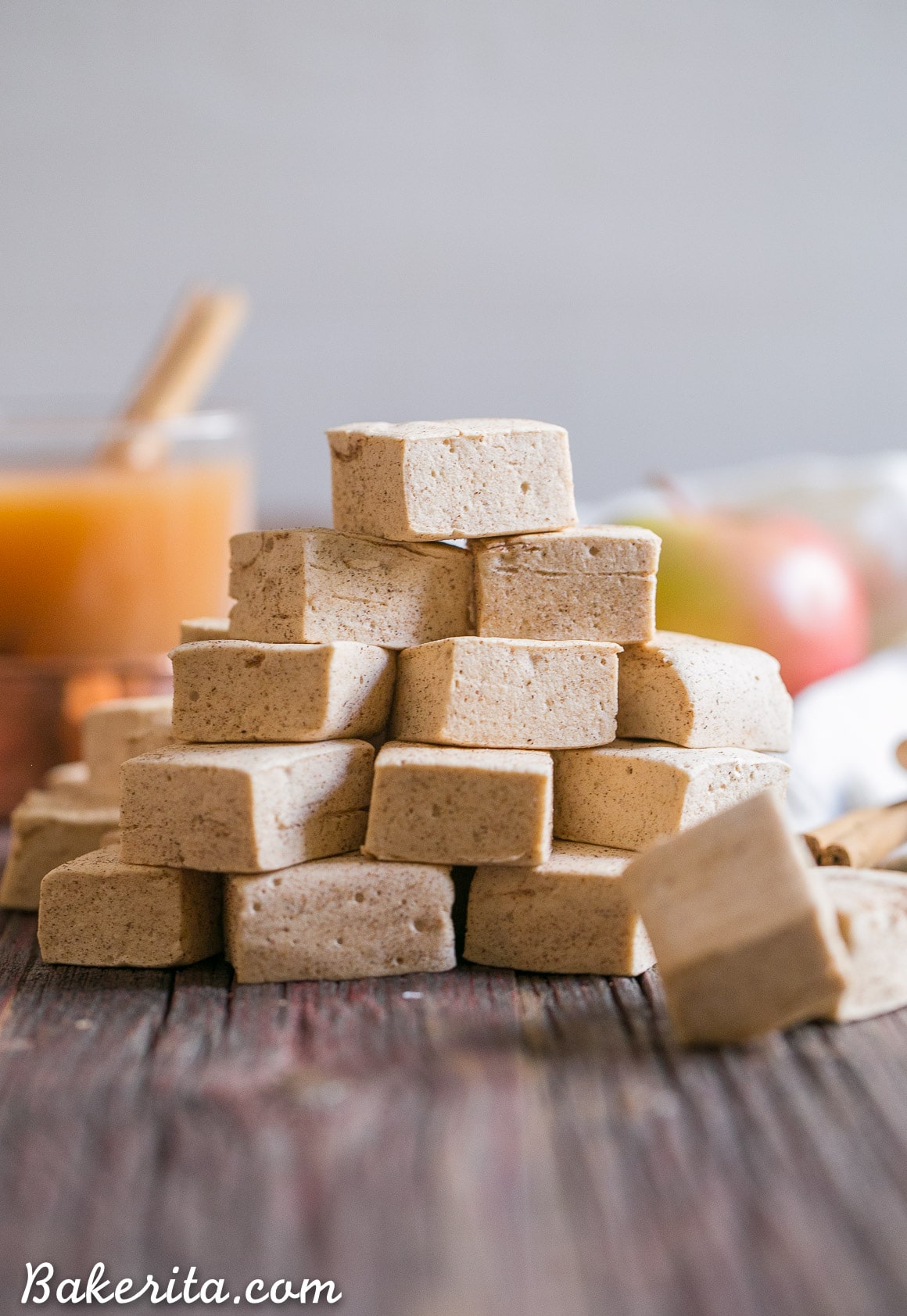 this recipe
I really want to complain about how fast this year has gone by – November already, HOW?! But instead we’re going to talk about something infinitely more delicious…fluffy, maple-sweetened, cinnamon-dusted apple spice marshmallows!

A few weeks back my friend Monica from The Movement Menu invited me over for a photoshoot. As we texted about what to make, we decided a whole bunch of marshmallows. We started brainstorming marshmallow ideas and after not being able to narrow it down, we decided on two. each. 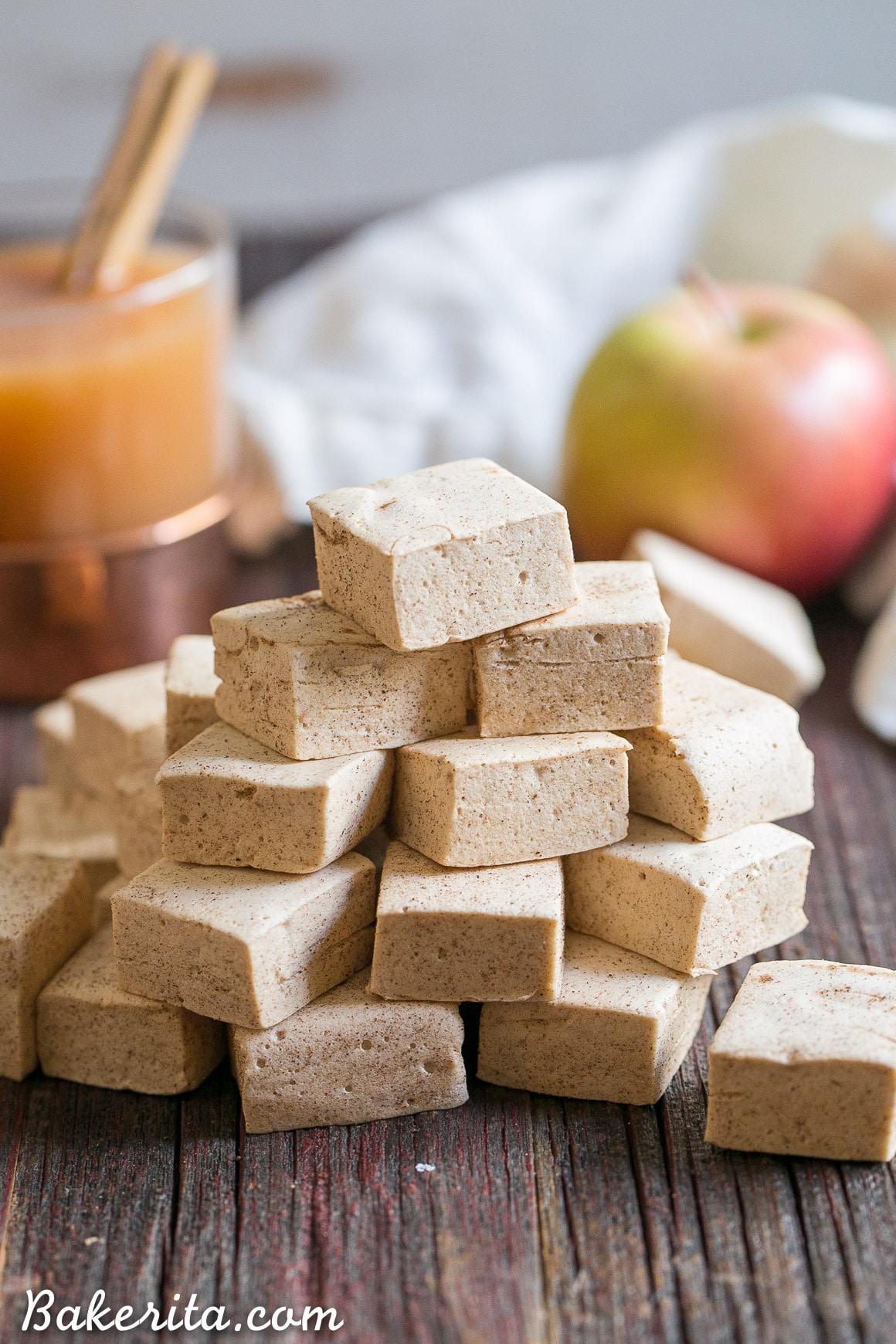 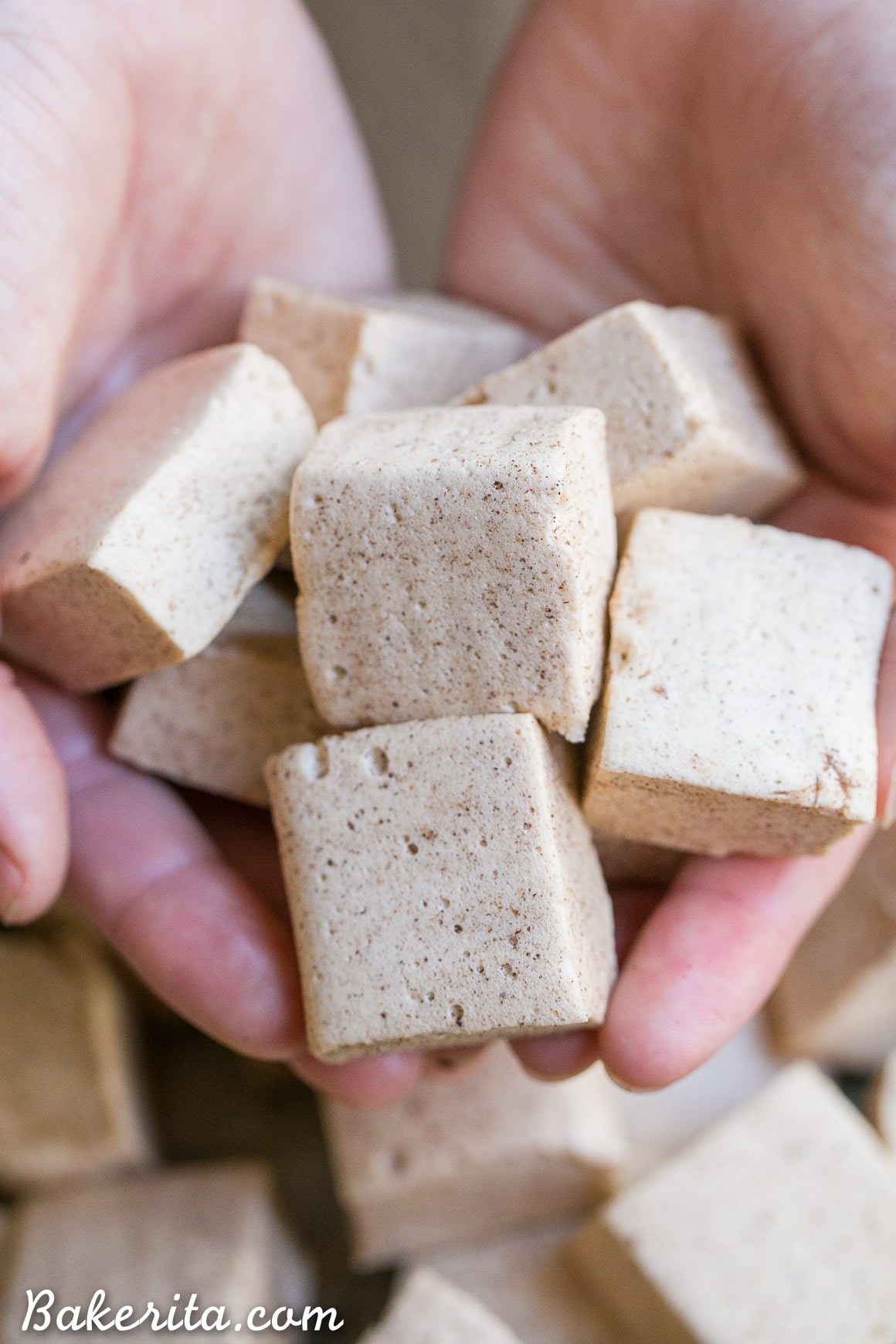 So..let’s get to the point and talk homemade marshmallows. Have you ever tried them? If you have, you know why I’m kind of obsessing over them over here. They’re nothing like their store-bought counterparts and will totally change your marshmallow perspective.

Instead of a leathery, sticky mess, these are fluffy and super pillowy. Monica and I were giggling throughout the photoshoot as they literally bounced around the set. Homemade marshmallows are just a food to make you happy, and I promise they’re not nearly as hard to make as you’ve imagined! 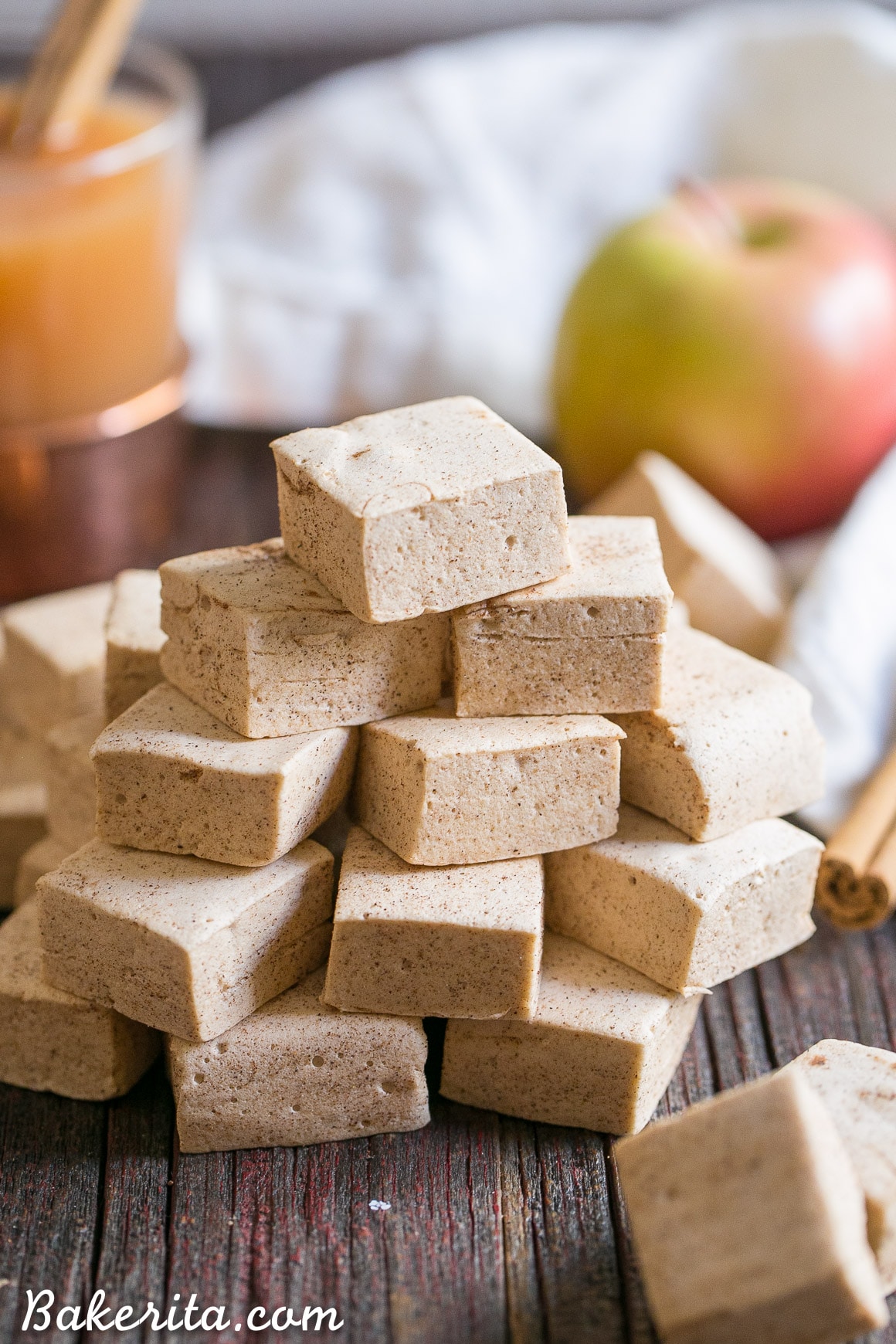 These ones are extraordinarily flavored with apple juice and warm spices – the apple juice is reduced down to form a flavorful concentrate, and when paired with the spices, it creates a flavor reminiscent of apple pie. It’s pretty irresistible, if I do say so myself. Even better when tossed into a glass of hot spiced apple cider!

As the sweetener here, I used maple syrup because I thought it would pair nicely with the apple spice flavor, and it most definitely did! However, if you want to use honey, or a mix of the two, that would also be delicious. 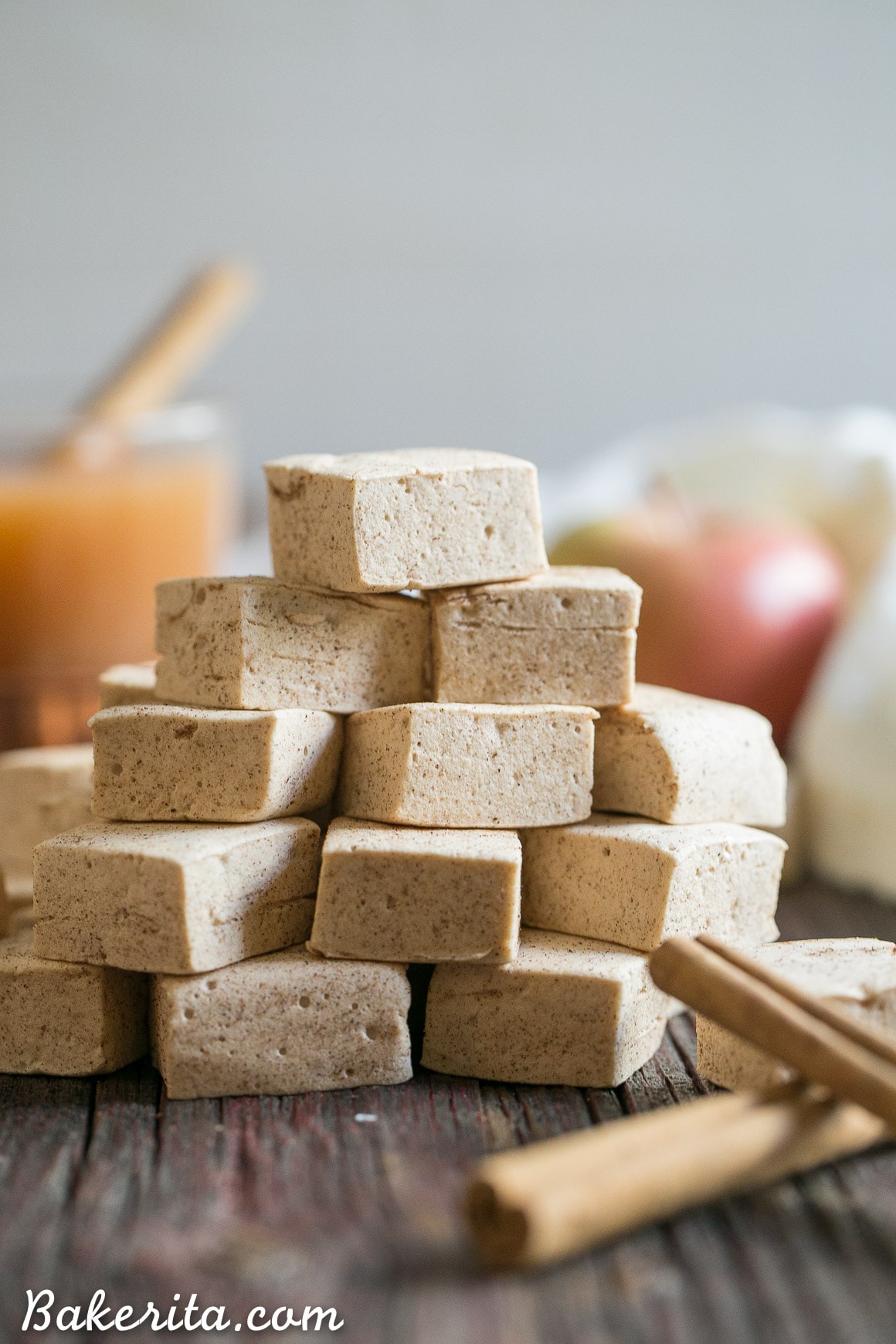 These apple spice marshmallows are a fun way to experiment with candy making, and would be a delicious addition to your Thanksgiving dessert table, especially if they’re served next to the hot apple cider! While you’re at it, why not whip up a batch of Monica’s Chocolate Marshmallows to pair with the hot cocoa? Enjoy!