These Mocha Almond Fudge Bars are incredibly rich and delicious, with a chocolate-coffee fudge studded with crunchy almonds, all sitting on top of a simple shortbread crust. These gluten-free, paleo and vegan fudge bars are irresistible! 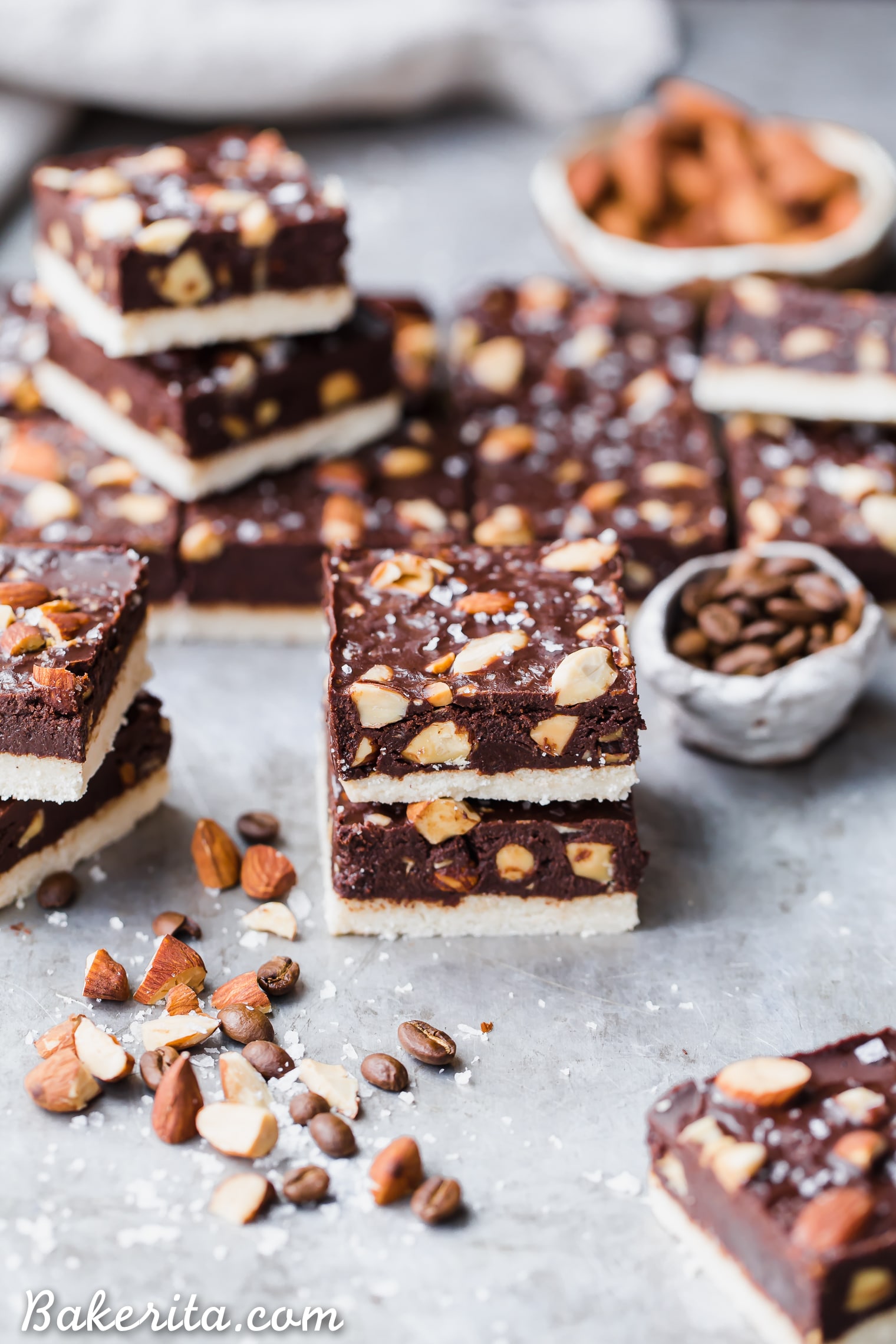 I’ve got three words for you that are pretttyyy irresistible: MOCHA. ALMOND. FUDGE. You’re hooked, aren’t you? I know I was as soon as the words flew into my head and put themselves into a perfect little bar that needed to be made ASAP.

They’re super easy to make (you guys probably know by now that’s how I like to roll) and almost no-bake. The crust needs to be baked for the good, crunchy shortbread crust factor, there’s no baking (or even cooking) for the top layers. Just a little melting and stirring. 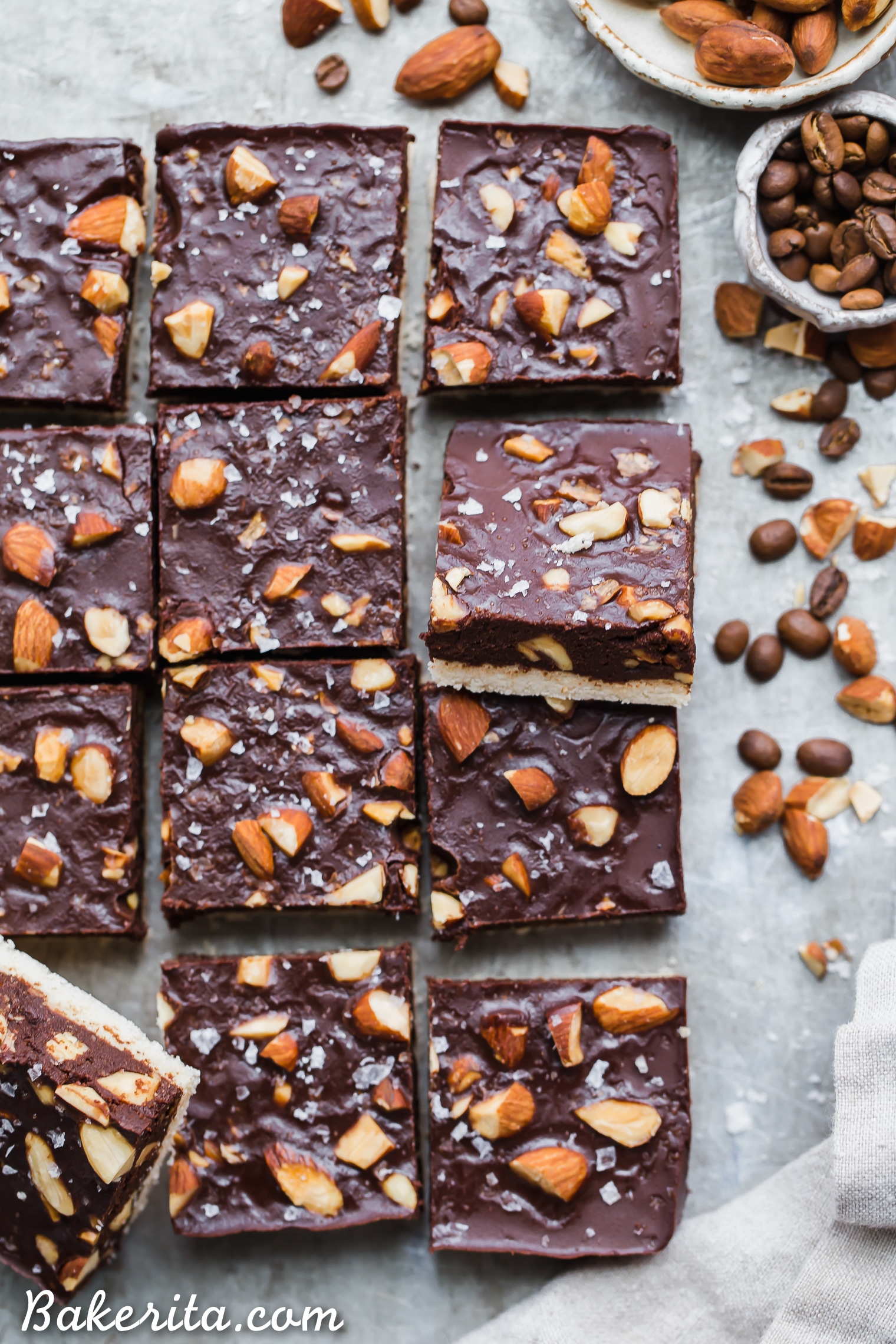 Let’s chat real quick about those delightful layers and then we’ll get right into the recipe – I know you’re already itching to make them ;)

FIRST – that shortbread crust! It’s so simple and similar to the one I use for my favorite/almost famous Homemade Twix Bars. Only three ingredients: coconut flour, because it’s so absorbent it helps totally replicate that shortbread-y texture; maple syrup, for a little sweetness; and coconut oil, to help with the crunch factor and holding it all together. 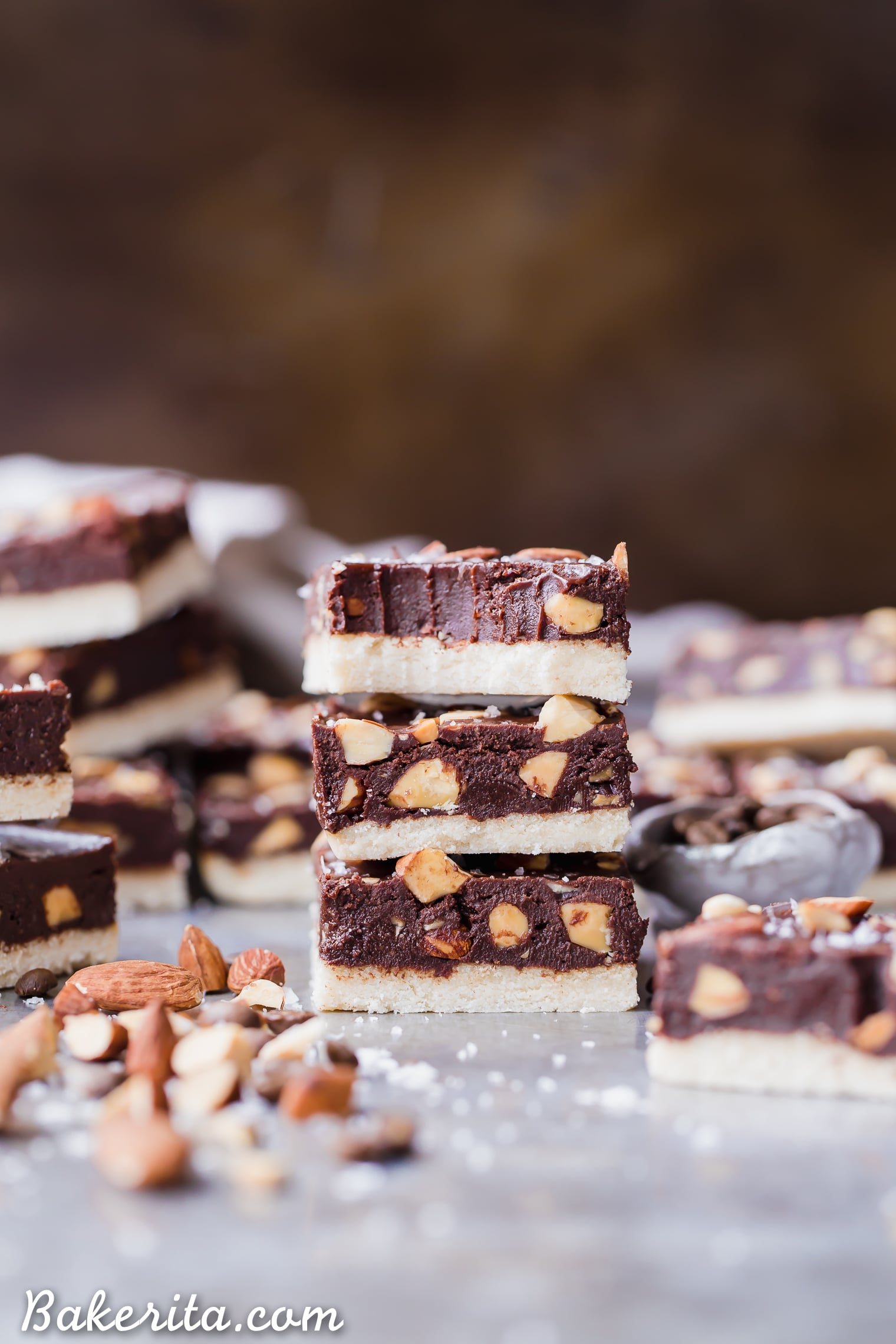 The next layer is my fave…that mocha almond fudge goodness. It’s literally a layer of fudge, infused with espresso powder and toasted almonds to add a whole new dimension of flavor to the fudge. The coffee adds warmth to the fudge and the almond butter helps bring out the almond flavor even more.

Quick tip: I’d stick with instant espresso powder here instead of instant coffee – it has a lot stronger depth of flavor, and instant coffee won’t give the same effect unless you use a lot more of it. If it’s all you have, taste as you go to make sure it tastes as “coffee-like” as you prefer. 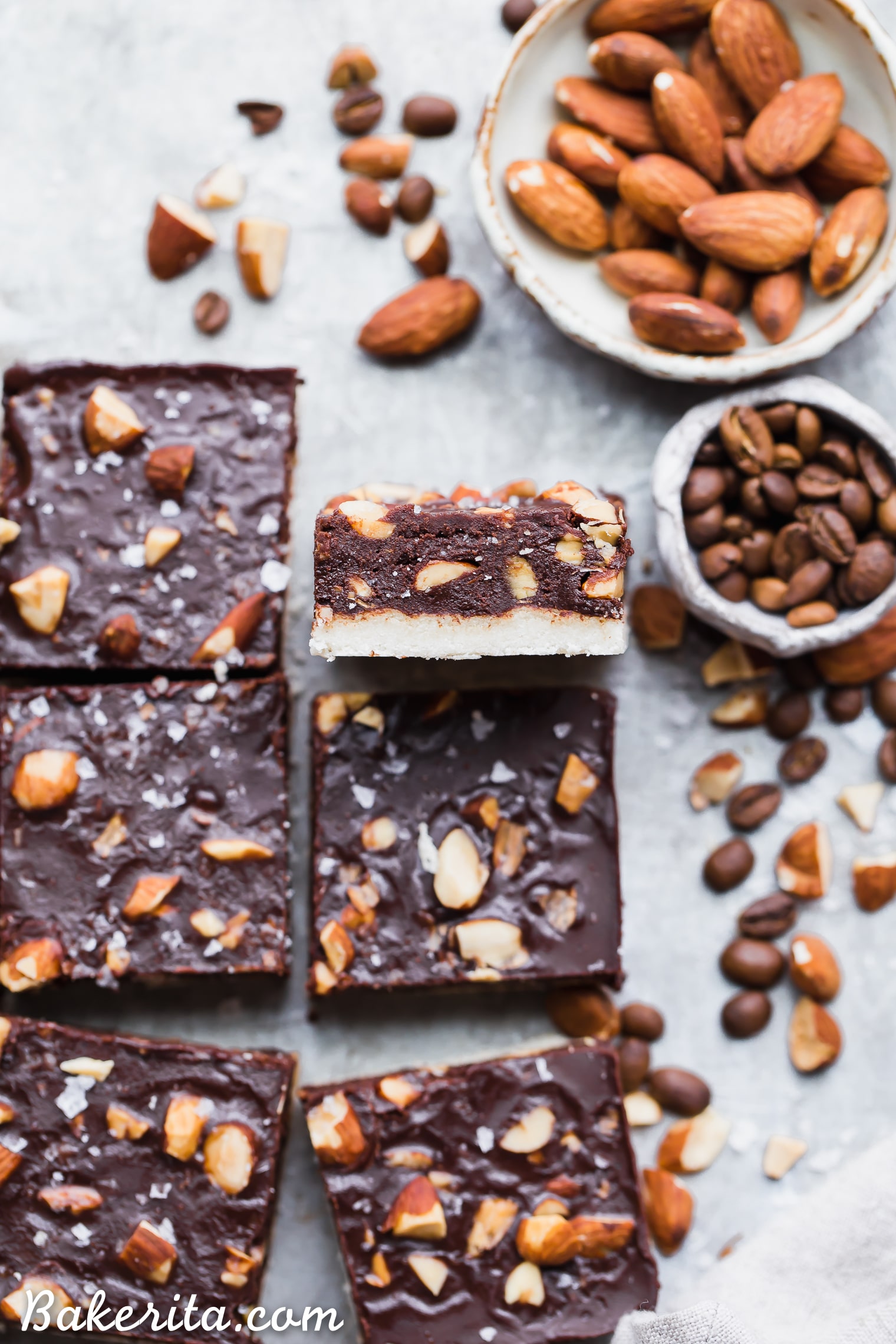 On top of the fudge layer is a simple layer of homemade chocolate – just a combo of coconut oil, maple syrup and cocoa powder. You can sub with some melted chocolate too if you prefer. Top that with crunchy chopped almonds and sea salt (if you’re like me and like flaky sea salt on top of every chocolate dessert) and you’re golden!

I left these bars at my mom’s house when some of her family was visiting and they were a hit. These are the family members who normally aren’t the most enthusiastic about healthier desserts, so their approval and excitement is always a WIN. They brought the bars up to ME without me asking how they were – always a good sign :) 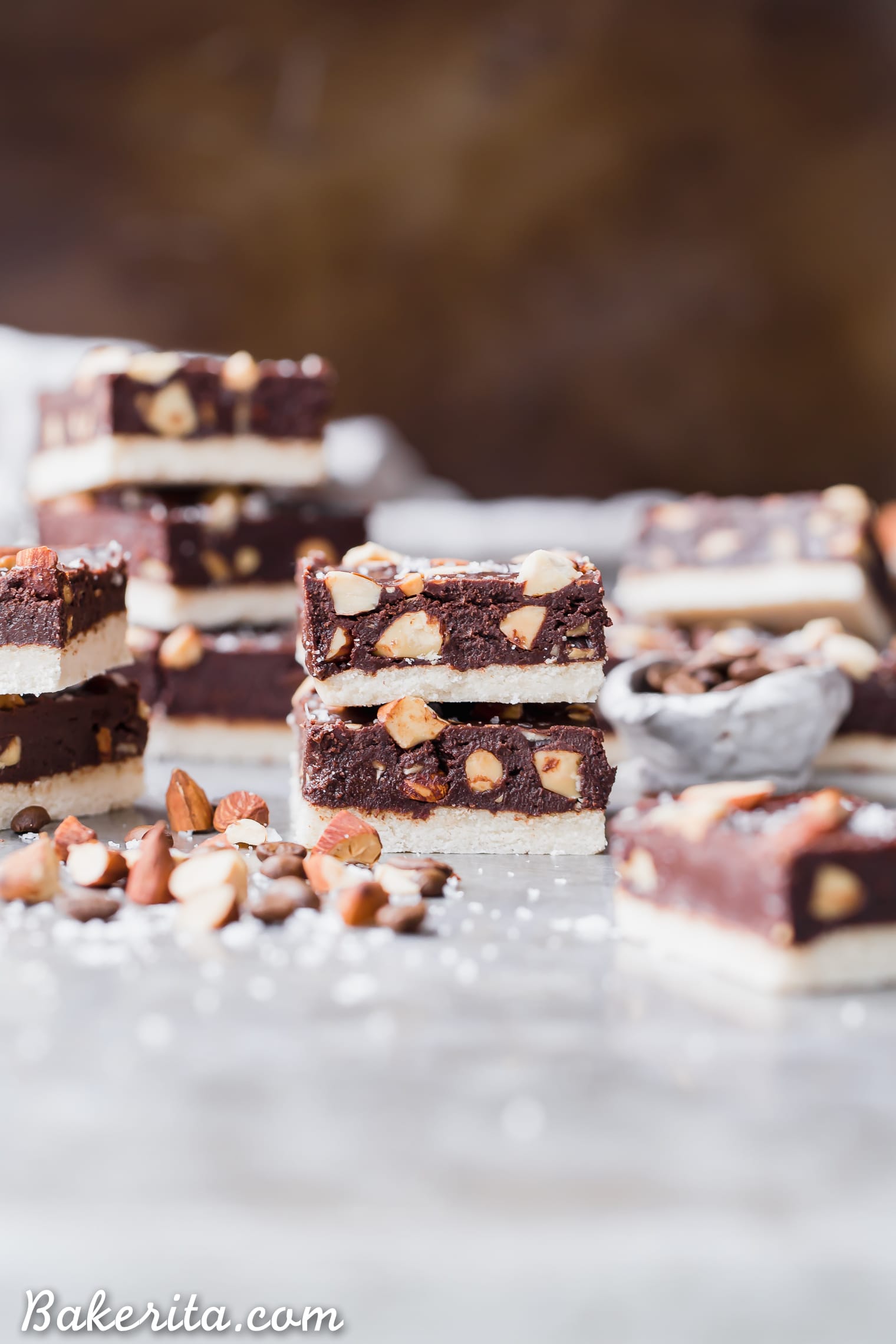 If you’re a fan of chocolate, or coffee, or almonds…I think you’ll be into these. Hope you give them a try and enjoy, my loves! You’re the greatest, and don’t forget it :) sending you lots of love today and every day! 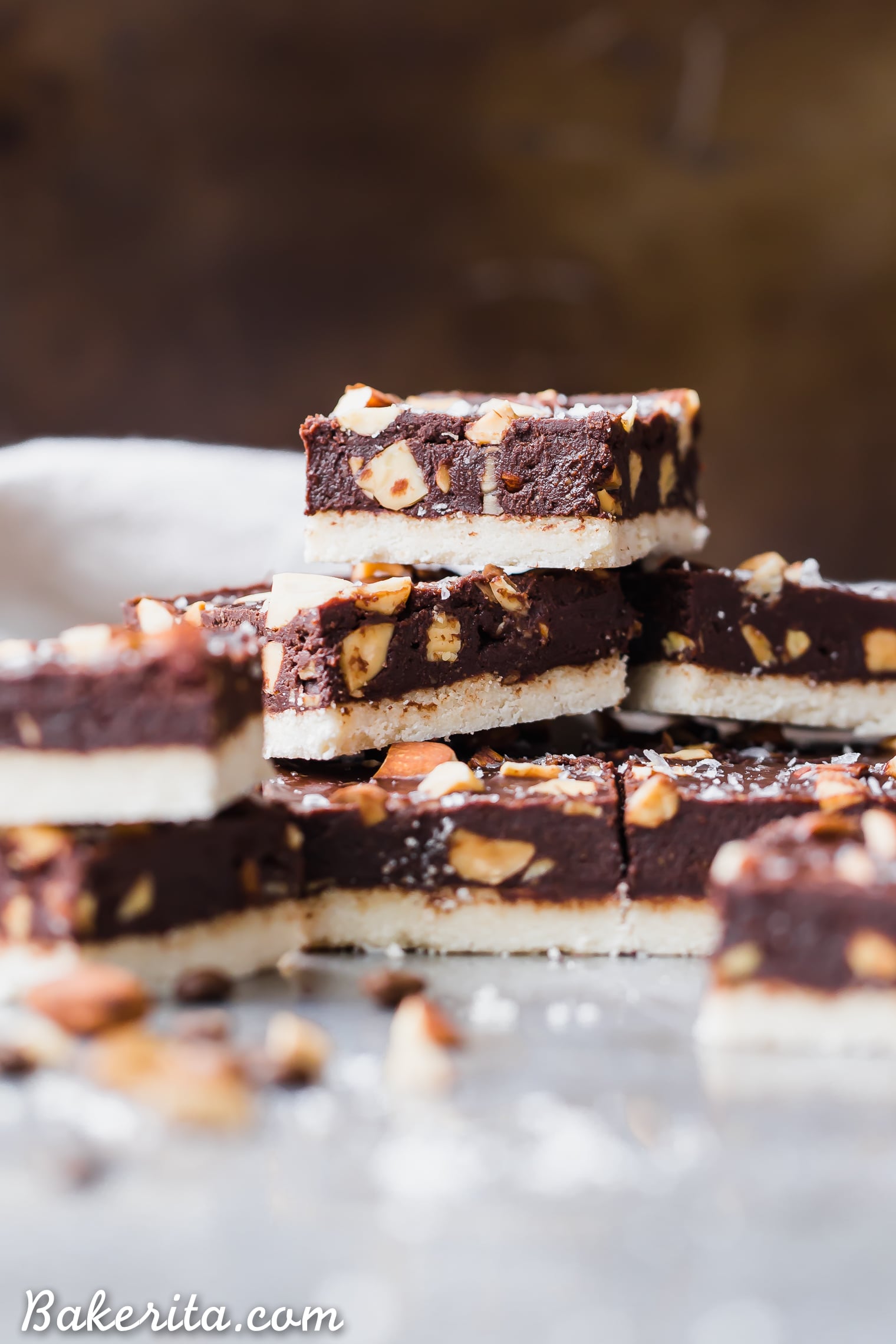 For the shortbread crust

For the mocha fudge filling

For the chocolate topping

Thank you to the women who nominated me to do this