This Apple Cinnamon Oatmeal is topped with caramelized apples and crunchy pecans for an irresistible, healthy breakfast that’s much more decadent than it looks. This breakfast treat is gluten-free, refined sugar-free + vegan! 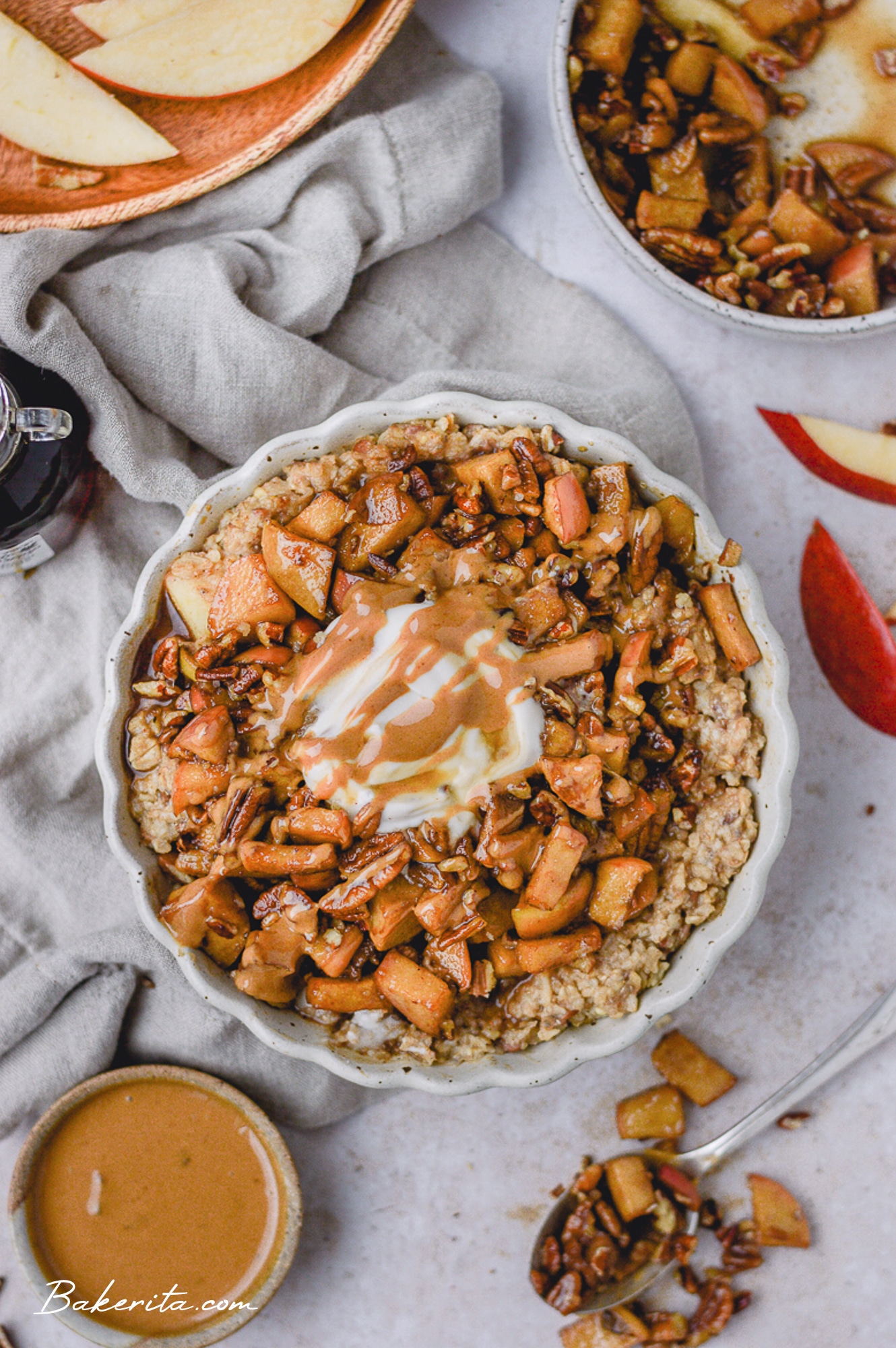 I’ve been sitting here wondering what to call this bowl of delicious apple oatmeal for a little while now. My sister’s suggestions were “apple pie oatmealiciousness” and “caramel apple oatmeal extravaganza” and while more exciting than my usual recipe titles, not exactly SEO friendly or very self-explanatory.

I finally decided on Apple Cinnamon Oatmeal, but MAN how boring does that sound? It reminds me of the instant oatmeal packets from childhood – remember those? And the weird, thin, almost chalky oatmeal it made? 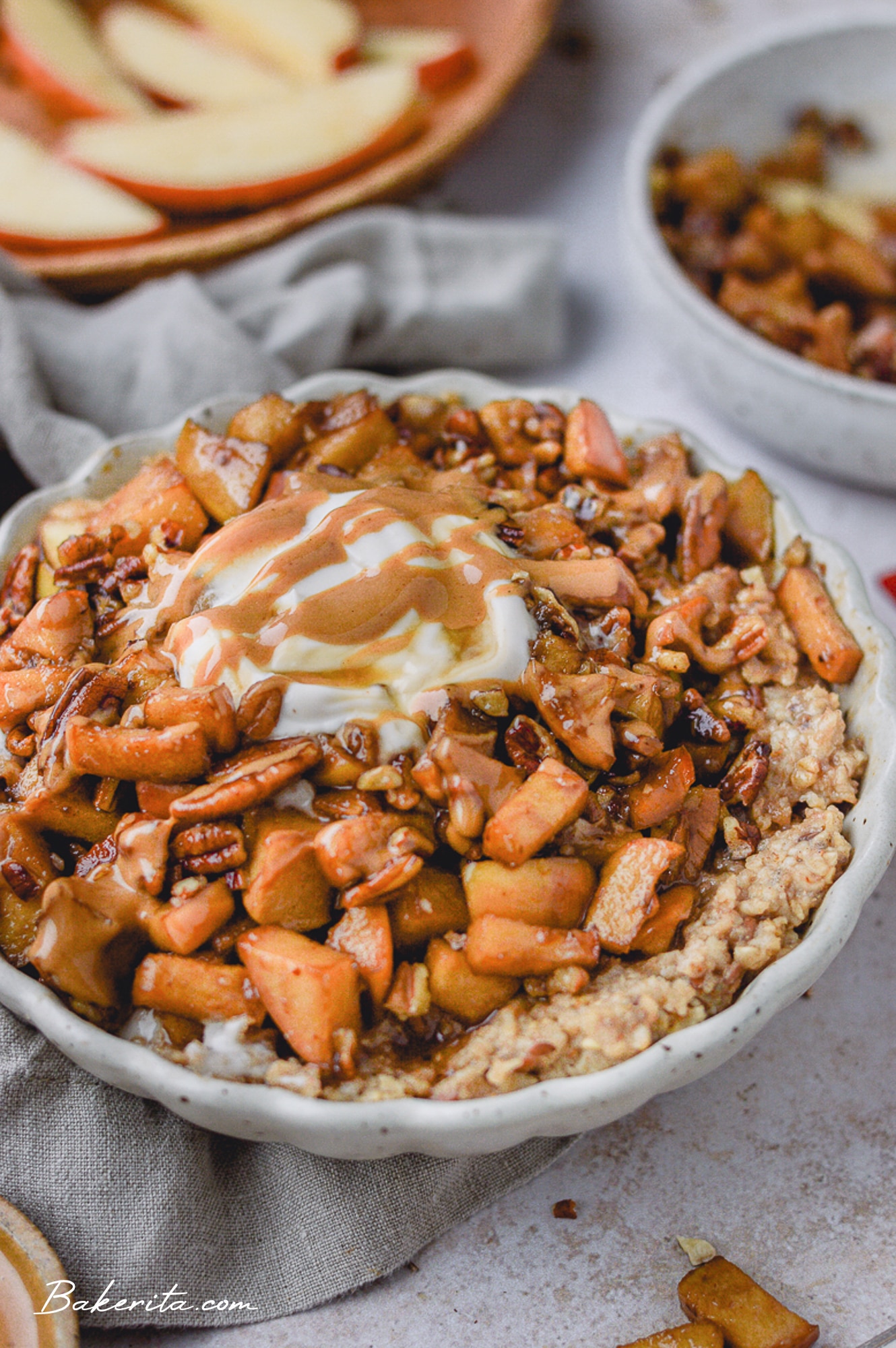 This apple cinnamon oatmeal is such a far cry from those sad breakfast days. This easy and delicious recipe, unlike those sad packets, has the most incredible caramelized apple and pecan topping that takes this oatmeal to a whole new level.

But before we get to the topping, there’s some wonderful stuff going on underneath there too. Let’s get into how to make this goodness. 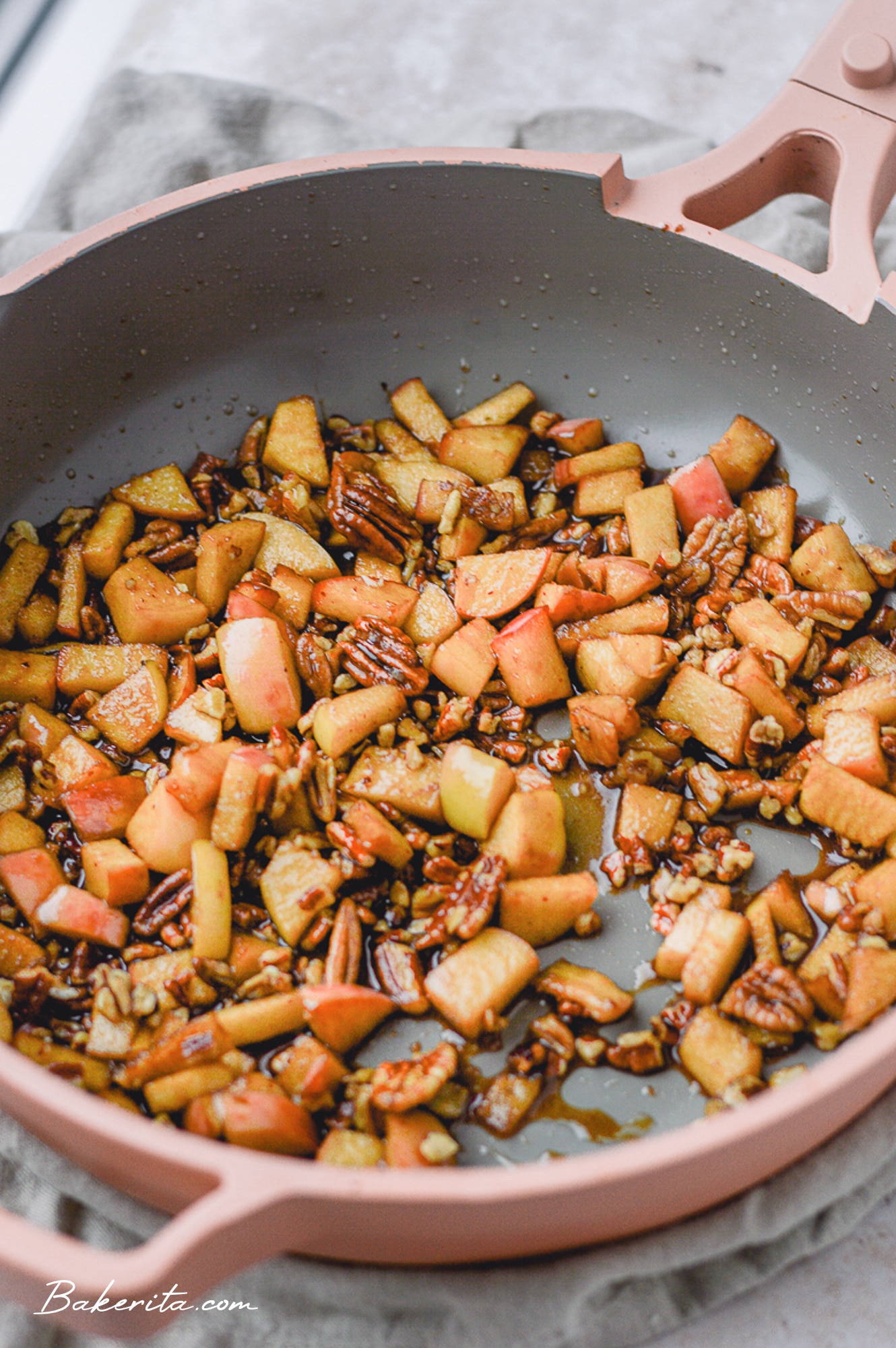 How to make Apple Cinnamon Oatmeal:

One apple is diced for the whole recipe – half of it gets caramelized for the topping, and the other half is stirred in with the oats.

To help hydrate the oats and add a TON of flavor, I used a combination of apple juice and almond milk. You could go for all of one or the other, but I love that the apple juice adds extra apple flavor and sweetness, while the almond milk provides a bit of creaminess. We add cinnamon and nutmeg for that warm spice flavor, and sweeten things up with maple syrup.

While the oatmeal is simmering away, we’ll get the caramelized apple topping going. You’ll toss the diced apples in a pan with coconut oil and coconut sugar. They’ll simmer and caramelize for a few minutes until you’ve got caramel-like sauce and the apples have gotten nice and tender. Stir in the pecans so they get coated in caramel sauce too! 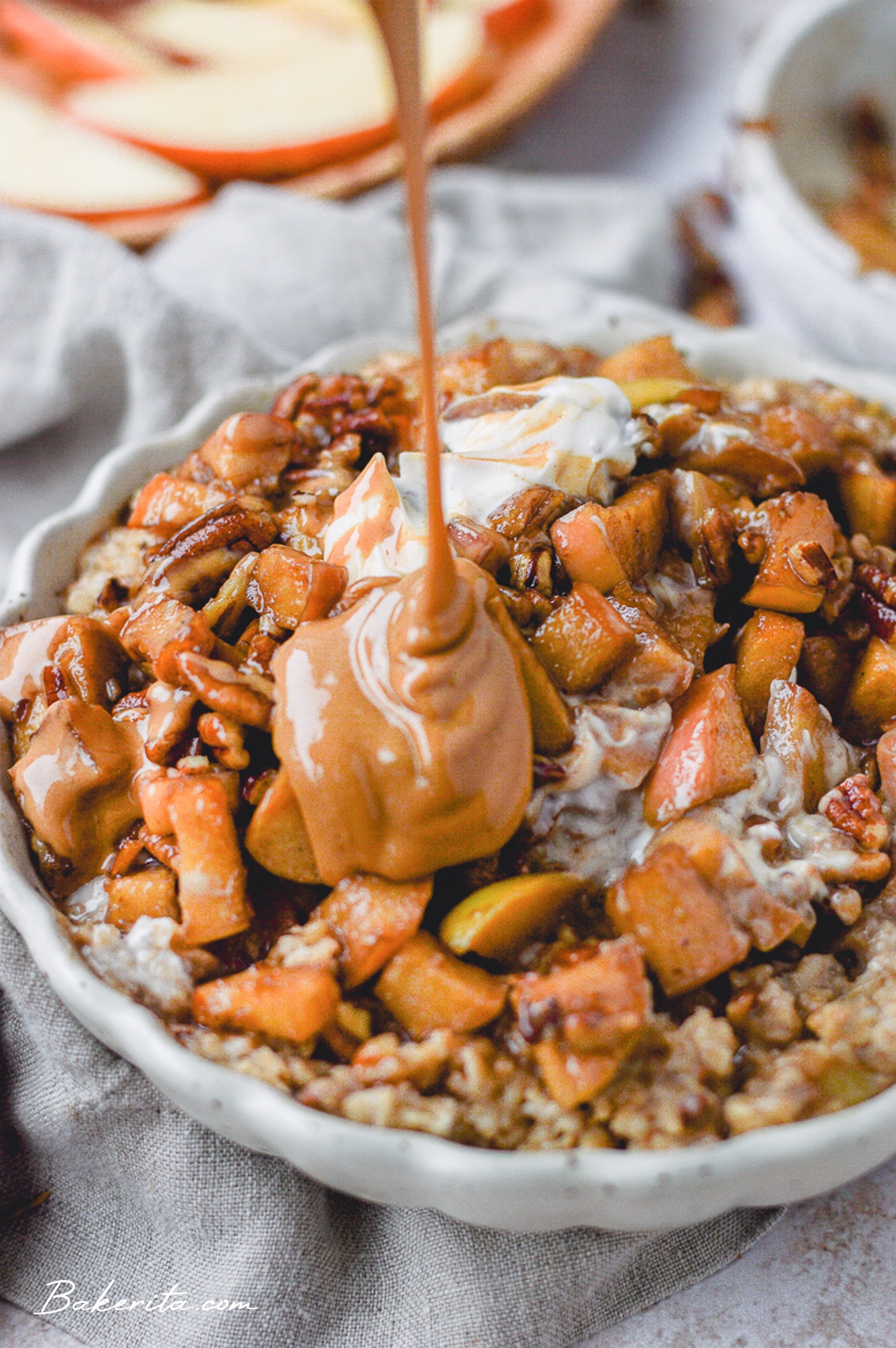 How many servings does this recipe make?

This recipe makes 1 serving and is best served immediately, but it can be easily scaled up for however many people you’re serving with little effort. The resulting bowl of oatmeal is an apple lover’s dream!

The creamy oatmeal has a bold apple taste thanks to the apple juice and the diced apples retain a nice bite. The cinnamon and nutmeg add the perfect amount of warmth! My personal favorite part though is the caramelized apple pecan topping.

If you want to take this apple cinnamon oatmeal to the next level I recommend the following options. I swear the combination of cashew maple sauce and dairy-free yogurt makes this feel like apple pie for breakfast!

The caramelized apples are sweet, a little sticky, and perfectly tender…you’ll be hard-pressed not to eat the topping on its own. This is a breakfast that’ll make any day feel special and is sure to warm up your chilly mornings. Enjoy!

If you decide to try this Apple Cinnamon Oatmeal, let me know how you like it in the comments below, and if you post on social media, be sure to tag me @bakeritablog and #bakerita so I can see your creation!! Enjoy :D

This Apple Cinnamon Oatmeal is topped with caramelized apples and crunchy pecans for an irresistible, healthy breakfast that’s much more decadent than it looks. This breakfast treat is gluten-free, refined sugar-free + vegan!

For the caramel apple topping